I got the privilege to chaperone a field trip to Chicago a couple of weeks ago.  I was asked to come along by my mentor Mrs. Berry.  As a seventh grader in her class, I was inspired by her teaching and decided to become a history teacher to be like her.  I got the privilege last October to sub in her class for two weeks while she was on vacation.  Many of the students on the trip were the same ones that I taught which made the trip even more fun.

She teaches a social studies extension class that focuses on the middle ages.  While in the class, you take on a role of someone from the middle ages and write a diary in that character.  You are also put into a group that has to design a castle both on paper and create a model.  At the end of the semester, all the student groups have to present their castles before a king at a banquet.  The class is really fun teaching the students not only about life in the middle ages, but also about responsibility, working in groups, using your imagination, literary skills, and much more.

The field trip is a bonus to the class.  It actually happens after the school year has ended.  It's always such a hit that many eighth graders and even high schoolers return for the trip.  After meeting at the school in the morning, we loaded up on 2 school buses and headed to the Chicago Art Institute.  As a group, Mrs. Berry takes the students through some of the Renaissance Art and Armour in the museum.  After the kids go through the Renaissance Art they are allowed to go through other exhibits on their own in groups.  After a couple of hours in the museum we regrouped and headed outside to walk through Millennium Park.  The kids got to play in the fountains and we did an obligatory group photo in front of the "Chicago Bean".

We then continued walking through Chicago along the shoreline until we reached Navy Pier.  The kids are set free again and allowed to stroll along the pier, take advantage of the rides, or just snack on all the food options.  After some freedom and sunshine (we had gorgeous weather!), we loaded back up on the buses and headed to Schaumburg, IL to visit the Medieval Times dinner show.  While at the show, the kids get to experience what eating was like in the Middle Ages (no silverware!) and got to watch knights compete in a tournament.  After the show, the students even got to meet the knights, get autographs, and take pictures with them.  We loaded back on the buses and made back to the school at 2:30am!  Our bus was pretty quiet and most everyone slept (including me and Mrs. Berry) on the way home.

I spent most of my time trying to catch Mrs. Berry up on everything going on in my life and hearing what is going on in hers.  Even though we keep up via email, it's always great to hang out with her.  She is such a fantastic lady and I truly love and appreciate all she does! 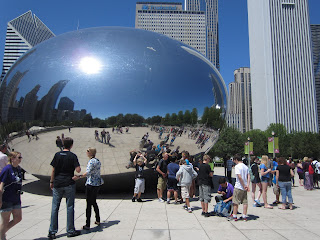 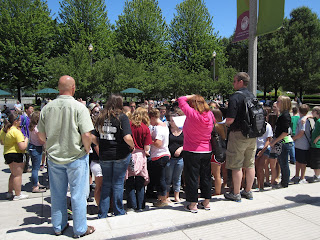 (Mrs. Berry giving the kids instructions and rules for the walk to Navy Pier.) 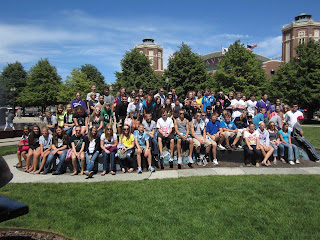 (Group shot -- not counting chaperons, which there were around 10 of us -- in front of the opening to the pier) 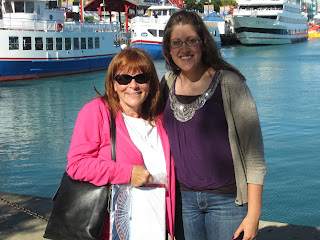 (The Lovely Mrs. Berry and myself in front of the pier.  The weather was absolutely gorgeous and the water was crystal clear.) 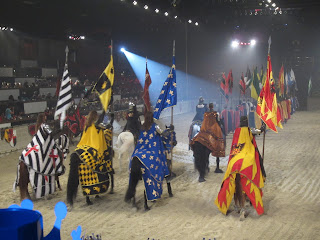 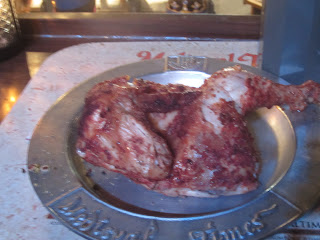 (I think the waiter called this baby drago, but it was actually half a chicken.  They also served soup, bread, ribs, potato wedges, and a pastry.  Since there was no silverware, you had to pick apart and eat all the steamy hot food with your fingers.  The chicken was absolutely amazing.) 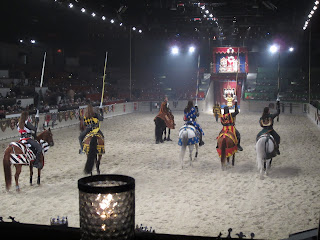 (Here the knights are preparing for some jousting games.) 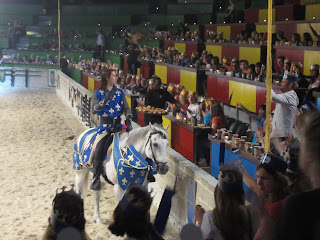 (We were seated in the blue section, letting us know to cheer on the blue knight.  He sadly did not win the tournament, but it was fun cheering him on anyway.)