**Note: I wrote this post on Wednesday & secretly hoping that she's already here by the time this post is released.  Highly doubtful though. . . 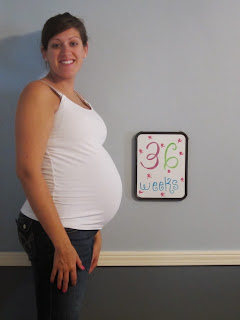 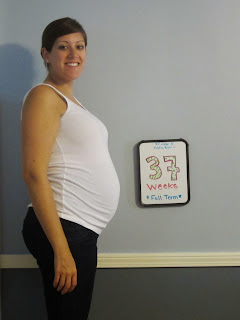 (37 Weeks!  Finally considered full term.  All baby does now is fatten up!  Also, you can't tell from the picture, but Steve chose to write a message on my little wipe board.  Something about freaking out about meeting her so soon.) 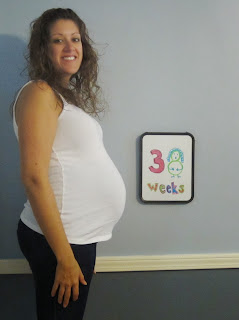 (38 weeks and definitely feeling it!) 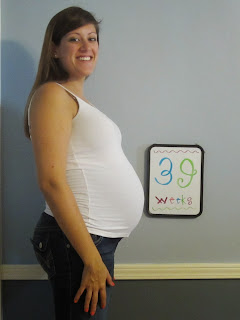 I sort of had myself convinced that Bean would be early.  By the end of September, I stopped making plans and just lived in the moment, expecting her to come at any moment.  September has come to a close and now I know she will definitely be an October baby!  I decided to go back to making plans (even though now it's realistic I'm going to have to break them at some point!) because I'm going crazy just waiting for a sign she's coming.

There have been plenty of signs.  For the past 2 weeks I've been having contractions.  Sometimes they're in regular intervals, but most times they are random.  I've got an app on my phone I use to count the contractions, but most of the time, it just drives me crazy.  I'll forget to record one, or they just stop and I think, "I just wasted my time with those fake contractions!"  I have to keep reminding myself that they aren't really fake.  Every contraction I'm having now has a purpose, whether it's just Bean practicing for her debut, or my body actually progressing.  And yes, I am progressing!

I go to the doctor weekly and am now being check for progress each time.  3 appointments ago, I was told something was beginning and I was at 1cm.  2 appointments ago, nothing had changed and I was pretty bummed, especially when he threw out the induction word - don't get me started!  This past appointment brought back excitement - I'm at a 2!  Woooo!  He again discussed induction with me.  He wanted to induce on Monday, and I at least convinced him to just make it a regular appointment with possible induction on Wednesday.  I am in full out "Baby Come Out!" mode.  I know induction can be a great thing, but I also know it can be a horrible thing.  I"m hoping that Bean will just decide to stop stressing momma and come out on her own before Monday (although, this still stresses me out because I'm constantly analyzing every feeling I'm having and convincing myself labor is starting).

I've started taking walks, trying to stay up on my feet more, and even doing some little exercises on a stability ball in hopes of speeding up this process.  I also made these "labor inducing cupcakes" that ended up being a bust (seeing as how I ate them Monday night and baby is still on the inside).  All they did for me was give me some of the worst heartburn I've ever had (and I've had bad heartburn these past few months!).  They tasted good (that is if you like lemon), but they are sooo lemony you can just taste the acid.  Haha 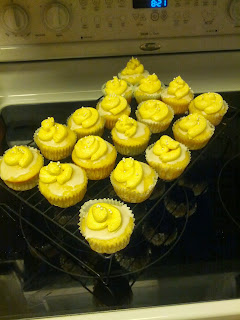 (These cupcakes were pretty intense to make.  Probably the most involved cupcakes I've ever done.  It was a lemon based cake, infused with lemon syrup, topped with a lemon glaze - the white stuff- and then topped with a lemon buttercream icing.  They tasted like eating a lemon drop!  I made Steve try one.  His face immediately puckered followed by head shaking and "I don't like it!" So far, I've consumed 3 and no baby has showed up, so I'd say myth busted.  However, I got the recipe via my sister-in-law's pinterest and she swears by them! She's made them for several full term preggos and their babies popped out soon after.)


So for now, we wait.  At times, I'm scheming up new ways to help move her along, but then I stop and think. . . maybe I'll just continue to lay here and enjoy the peace and quiet while it's here.  But then I remember my last Tums is about to wear off and the heartburn will kick back up and I think "GET HER OUT!"  So I will just continue with the struggle of 'I'm ready for her to come and yet not ready for her to come'.  Not excited at all about the process it's going to take to meet her, and pretty fearful of the whole responsibility of a newborn.  But I think both Steve and I can now admit we're ready to meet our little girl and be a family of 3!
Posted by Unknown at 12:36 PM