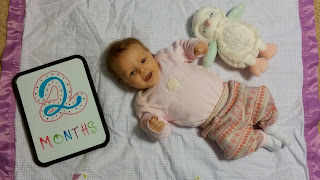 (How in the world is this sweet little girl already 2 months old?  Okay, as I sit and write this blog, she is actually 2.5 months.  I had every intention of writing this post before Christmas break, but it didn't happen.  However, the above picture was taken when she was 2 months old!  That should count for something, right?)

This past month has sure flown by!  Days seem to go pretty quick when you are living in the "3 hour cycle". Bean now takes about 30 minutes to eat.  On a good day, she burps quickly and then "plays" for about 30 minutes before falling asleep.  Play usually consists of being propped up on the Boppy staring at Momma.  I usually make lots of faces (which makes her laugh) or shake toys in front of her.  Sometimes she just observes the room happily.  On more high maintenance days, she refuses to burp which results in her tummy hurting and she just wants held.  I generally give into her and just hold her, but sometimes her high maintenance days fall on the days I'm trying to get a bunch of stuff done.  Then she just "hangs out" with me in the carrier while I work.

I don't have Bean on any schedule.  I let her decide what she wants and feed her on demand.  There is a sort of routine from day to day in that she sleeps a lot in the morning/afternoon and has a chunk of awake time in the evening.  But as far as when those naps actually happen are up to her.  About an hour after she eats, she is usually pretty sleepy and ready to nap.  I can always tell when she's tired by her eyes.  Once I put her pacifier in her mouth, her eyelids begin to close and her eyes shift back and forth.  She falls asleep in my arms (usually I can just sit and sort of rock her, sometimes I have to stand and bounce her) and then I either put her in her crib or in her swing.  She sleeps better with movement (and even better when someone holds her) so usually her swing wins out. When she wakes up from a nap, she is usually hungry and ready to eat.  She nurses anywhere between 2hr15min - 4 hours during the day.

Bean is almost sleeping through the night.  She usually just gets up once at night, somewhere between 3-5am, but then goes back to sleep until 8-9am.  Randomly, she will have a night in which she sleeps through the night.  I'm so used to sleeping in chunks at a time, that I usually wake up before her, and just lay in bed having to convince myself to not go in her room to check on her and wake her up to eat for my convenience.  Most times I end up falling back asleep until I hear her stir or cry on the monitor.  Steve, of course, is still sleeping through the night ;-). A big accomplishment for Bean this month is that she has mastered sucking her thumb!  She is able to find her thumb, put it in her mouth, and appease herself for a short while.  Her thumb hasn't replaced her love of her pacifier, but it helps that she can try to soothe herself when no one is able to get a pacifier to her.  Sometimes, she just sucks on all her fingers/fist instead of just her thumb.  Whatever makes you happy baby girl!

Right before Bean's 2 month appointment, she woke up from a nap with a goopy green stuff coming out of one of her eyes.  I decided that this was a legit reason to call the doctor (even though she had an appointment set for 5 days later).  I ended up bringing her in and discovered that she was having some sinus issues.  She showed signs of lots of drainage down her throat and the consensus was that her sinuses were backing up and coming out her eye.  All I could do was help flush out her sinuses with a nasal spray and try to keep her nose clear (even though she really didn't have drainage out her nose). 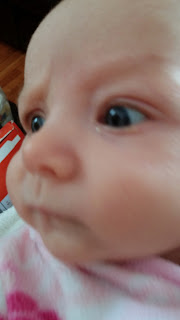 Bean was an absolute trooper at her appointment!  Her 2 month appointment marked the first of many shots to come.  She got 3 shots, 2 in one thigh & 1 in the other.  2 doctor's assistance did 2 of the shots at the same time to get it over as soon as possible.  Bean cried when she was pricked with the shots, but as soon as I lifted her up when they were done, she was smiling at the assistants.  She weighed in at 9 pounds, 14 ounces and 22.75" long.

Bean still is a very happy baby.  She smiles a ton and has the hints of a laughter.  Her favorite things to smile at are, of course, Momma & Daddy!  We make the silliest faces and noises to bring happiness to this little girl's face.  She now turns her head and looks in the direction of our voices and is tracking our movements.  She is growing very strong in her legs, arms, and neck!  She supports her own head now and only needs help when she is tired.  She loves to push off of things with our legs and we fear she will skip crawling and go straight to walking.  Slow down baby girl!  We aren't ready!

Bean is wearing 3 month clothing, but quickly going into 6 months (especially in sleepers!).  It was hard enough for me to pack away her newborn clothes, and am definitely not ready to do this with her 3 month clothing.  It seems like time is going way too quick.  I love seeing her growth in personality and look forward to getting to know her more, just not ready for her to loose all the babiness, yet. 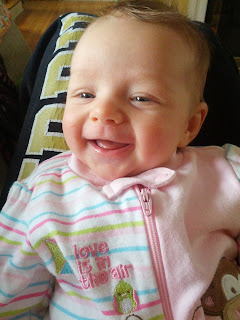