Our house has sadly become much quieter than it once was.  Our little Ramses died on Tuesday (okay, I must confess, he could have died on Monday but I found him Tuesday night.  Although, I'm pretty sure I remember hearing him running Monday night).  I am so used to hearing the purr of his wheel, that I was caught off guard by the silence downstairs while I was putting Bean to bed.  I noticed that his food dish was empty and refilled it.  But while I was refilling it, I thought man, usually Ramses is up by now.  I rustled my hand around the food dish to see if that would stir anything.  Upon looking in his little blue house, I found him curled up and not moving.  I knew right away that there wouldn't be anymore movement form that furry cutie.  There had been so many signs lately that suddenly clicked in my head.

Just over the weekend when all of Steve's family was visiting, I had said that he was getting old.  His life expectancy was around 2 years and he had passed the 2 year mark a few months ago.  We knew he wouldn't be around for much longer.  His little personality had changed, and you could tell he wasn't as spry as he once was.

Ramses had always been this tiny ball of energy.  He would scale his cage, run around it like crazy, cower in fear when you're hand was in the cage, and would never, ever let you touch him.  And if you did get to sneak in a touch, he usually squeaked at you.  However, during his cage cleaning prior to Thanksgiving, he actually let me pick him up, hold him, and put him in his ball.  This was not a good sign for me; although, when I put his ball down, he ran all around the house as usual.  I just chalked it up to a fluke.

And the last bit of evidence that he wasn't acting right was that for the past week the wheel was being really quiet when he ran!  Usually, you can hear it thudding, but it hadn't been.  In fact, I didn't even realize he was running in it until I stopped and watched him.  Hindsight, I'm guessing he wasn't running with his normal energy, but was running slower and lighter than he used to.

Who would have thought that it would be hard to say goodbye to a little hamster?!  Even though he was just a little hamster, he was our little hamster.  And boy will we miss his crazy shenanigans.  The stories of his many escapes will always bring smiles and laughter to our faces. 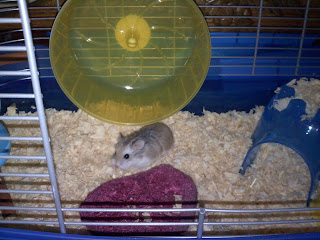 (This was our first picture of Ramses when we got him in the fall of 2010! Oh how your craziness will be missed in this household.)
Posted by Unknown at 7:30 AM