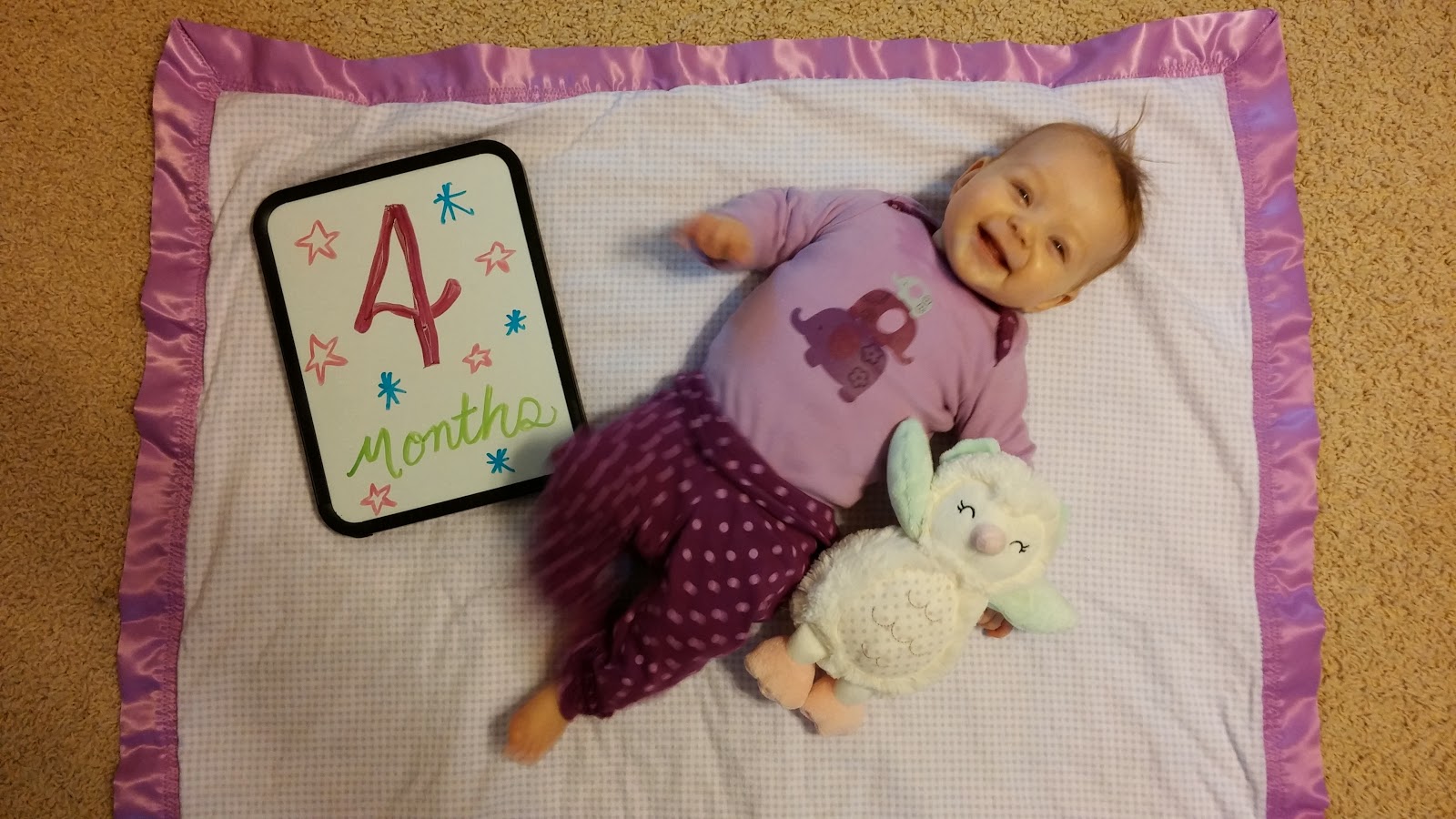 I started writing this post last week ago, but didn't get it finished up before a busy weekend.  I intentionally didn't post this on Bean's 4 month mark, because  I wanted to be able to share all of Bean's 4 month stats from her appointment earlier last week.  Bean is weighing in at a slim 13.5 pounds and is 25" long.  That puts her in the 50th percentile for weight and 75-90th percentile in height.  So in layman's terms, she's long and lean!  No "Michelin Man" rolls for this gal.

This past month was by far the hardest month for me being a mom.  I'm not sure if it was because of the freezing weather and feet of snow keeping us bound to the house or the fact that we had zero visitors (other than getting to hang out with friends in Lima).  I also really came to the realization of what being a mom really means -- I no longer do things for myself.  Everything I do, centers around taking care of my baby girl first and then taking care of my husband.  All. Day. Long. The only time I get "me" time is in the shower, but even at that, it usually comes to a quick end with a baby crying (or I have to rush in order to make it somewhere on time).  I love being a mom.  It's what I've always wanted.  It's just a whole lot harder than I ever expected.  I have no idea how teenagers and single moms do it.  Without Steve, I'm pretty sure I'd be balled up in the corner of a dark room sobbing.

Another reason this past month has been difficult is because Bean is growing and changing her nursing needs.  I almost threw in the towel on breastfeeding this past month.  I was at my wit's end.  Bean decided to go from nursing 8-10 min on one side + 8-12 min on the other side per nursing session to maybe 5 min total.  This caused a lot of stress on me.  I was concerned I wasn't producing enough milk and that Bean wasn't getting enough.  In each nursing session, she'd pull away, scream, and even bite (thank goodness she doesn't have teeth yet!).  Many times, we'd both be crying together.  I thought maybe she was teething - she'd pull at her gums and cry a lot, but so far no teeth have come up.  After doing some research, I discovered that babies become more efficient about nursing and become quicker.  I guess all her pulling away and screaming was because I was "forcing" her to eat.  I've now become much more relaxed and letting her dictate feedings and things are much better!  She now nurses 3-20 min a session every 2hr45 min - 3 hours.  Luckily, her spitting up has gotten much better, although she still has days that are bad.

In the past few weeks, Bean has started to change her routine as well.  Instead of eating, playing, and sleeping in a 3 hour cycle.  She has started to establish a bigger nap in the morning, and a couple of catnaps in the afternoon.  Sometimes she'll just do catnaps all day, or she'll go crazy with a 3 hour nap.  She likes to keep me on my toes.  I am starting to be able to tell how tired she is and whether it'll be short nap or a long nap.  She has dropped her "dinner" nap and stays awake from 5-8pm at night.  At 8 is when she gets her last feeding before bed and is typically asleep by 9pm.  She will then sleep until around 4am (sometimes a little sooner, sometimes closer to 6:30 or 7) and be hungry.  I'll feed her and she'll fall back asleep within a half hour and then sleep anywhere from 8-10am.  My goal is to get her sleeping from 8pm-8am, but i'll take what she's doing now!

Bean has really started to show her personality.  She loves to lay on her back and stare up at either the ceiling fan, bird mobile, or activity mat and just laugh.  Tonight, she started doing this crazy thing with holding her feet up in the air while laughing.  She can entertain herself finally!  She will play with her little caterpillar toy, tug at critters on her activity mat, or even play with blankets laying on her.  Her absolute favorite toys are still mommy and daddy.  Bean just lights up when daddy is in the room (which can be a bad thing when it is bedtime!).

She's become much more vocal and has even begun to fake cry.  Oh goodness child.  You can always tell if it's fake by making funny faces at her.  Then she'll start laughing and remember she was throwing a fit and cry again.  She has a cute giggle and little screeches.  Her new thing that just started last week is that she tries to blow raspberries with her tongue. It usually results in lots of spit coming out of her mouth (she always has a bib on now!).  She's also started to show more signs of wanting to be mobile.  She loves to be held upright so that she is standing on her feet.  She'll then pretend to walk by picking one foot up at a time in a "step" pattern.

Tummy time has become a thing of the past.  Every time she's placed on her tummy, she immediately rolls over onto her back.  Sometimes I'll repeatedly put her back on her tummy, but she never stays long in that position.  Just recently, she was laying on her back on her activity mat while we were getting dinner ready.  We heard her crying and Steve went in to find her rolled onto her tummy with her arm pinned under her!  Since then, we've seen her almost roll over from her back to tummy while trying to look at something behind her, but we've never witnessed her roll over from back to tummy.  This is much harder to do than from tummy to back.  My days of being able to leave her propped on the couch or bed are coming to a quick end.  I now make sure she's got pillows all around her!

At her 4 month check, Bean ended up getting 3 shots.  Last time she got shots, she screamed for a good hour that evening until Tylenol kicked in.  This time, I kept on top of the Tylenol for 24 hours.  She didn't seem to be in much pain, but she was very clingy and needy for the next day or so.  The whole next day, she did have a fever and I could tell she didn't feel good.  But my Thursday, she was my happy goofball daughter again. 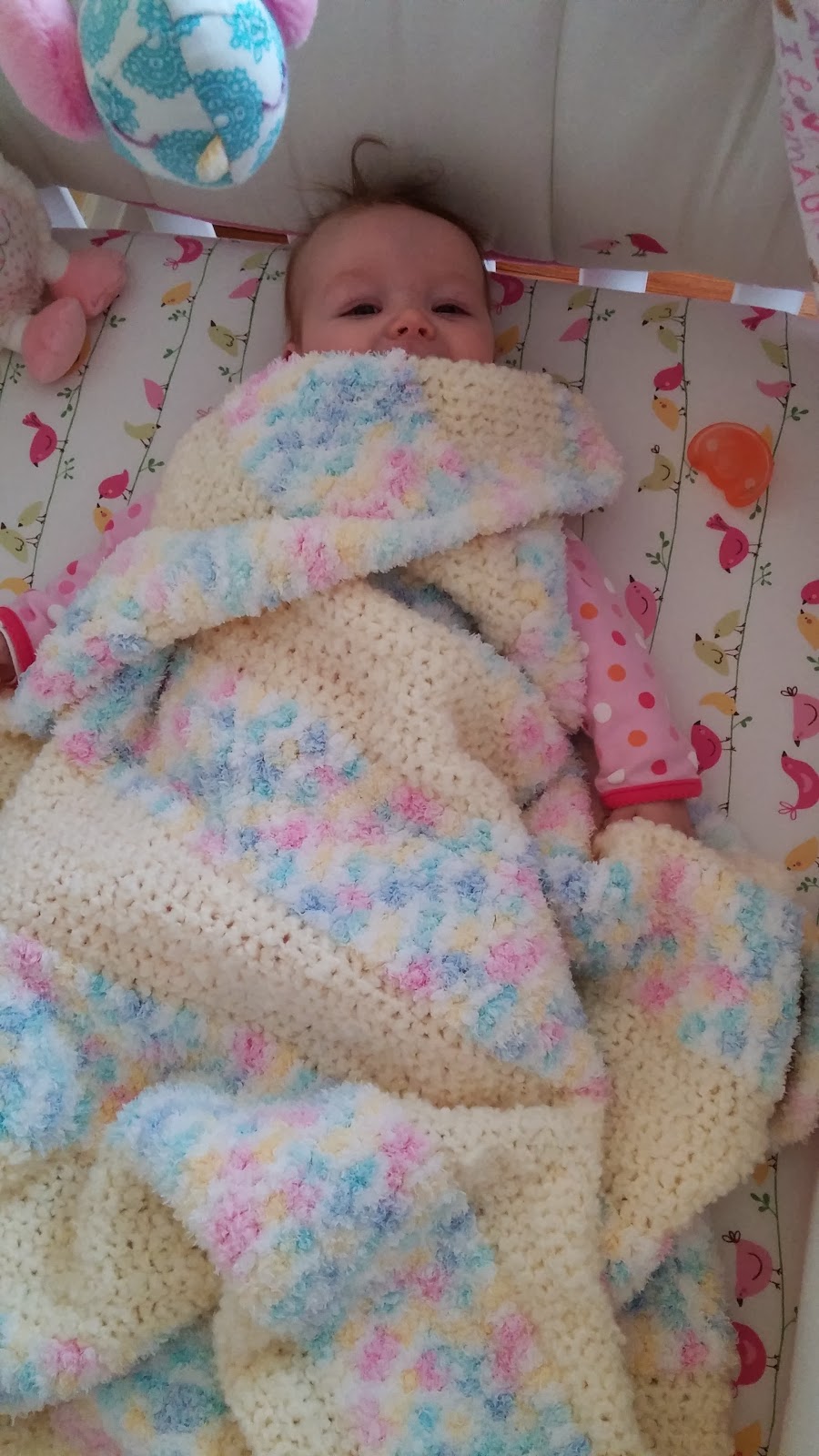 (Bean is a scooter!  Many mornings, I find her scooted all the way up to the edge of the crib.  The morning I took this picture, she had been cooing and squealing with laughter - as well as hearing lots of toots!- on the monitor for awhile before I went in and got her up.  I typically wait until she is actually crying to get her out of her crib.  When I went in, she was playing with her blanket and covering her face with it.  Such a silly girl!)

(Bean has become very aware of the tv!  When propped up on the boppy on the couch, she likes to look behind her up at the tv.  She definitely gets this from me.  I could watch tv 24/7 if I could get away with it.  I now have to turn it off sometimes when she gets distracted by it.) 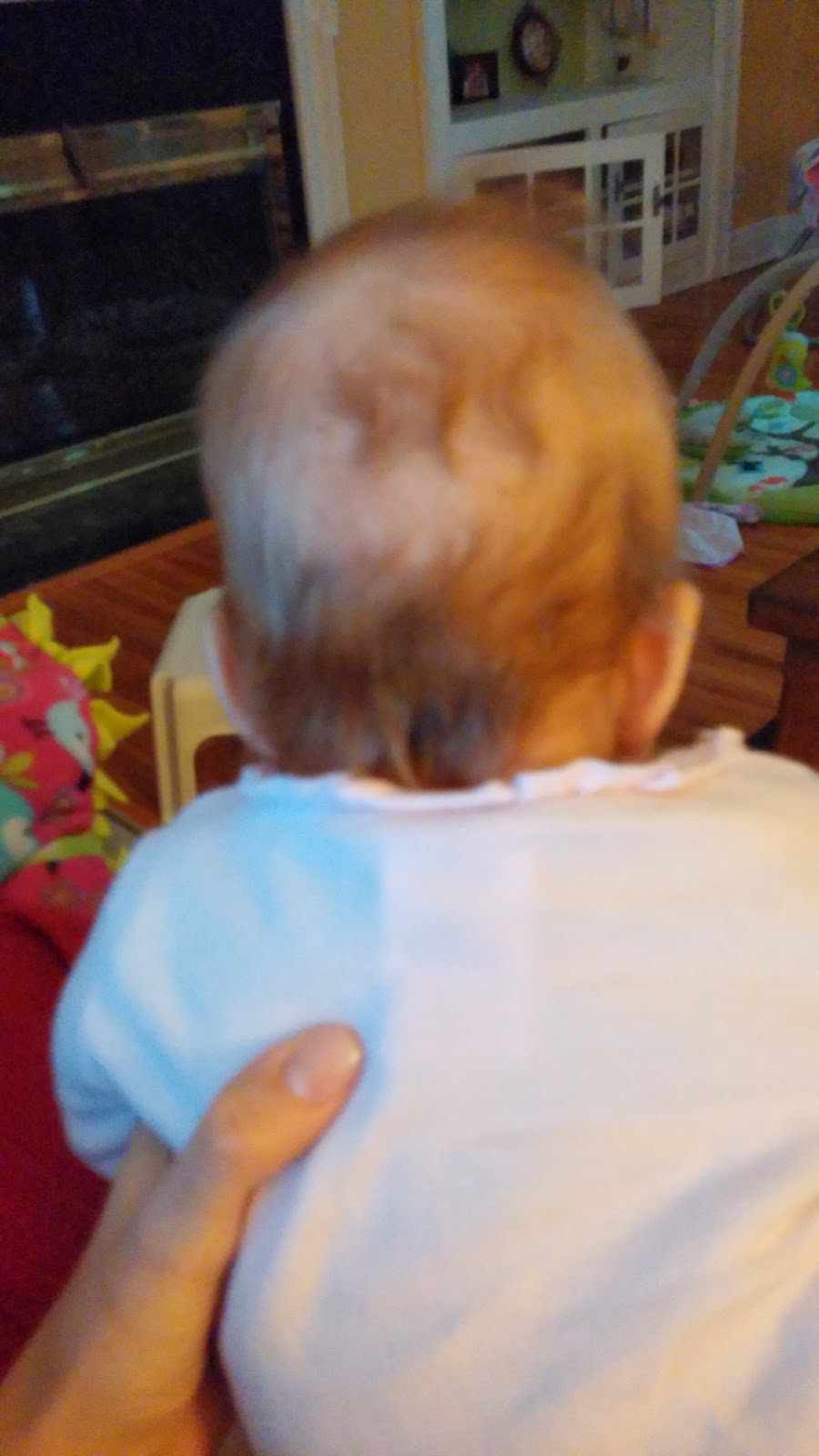 (Bean is balding! I started to notice that her hair had been thinning, and just thought maybe her head was growing but her hair was not.  After investigating her bed, I found lots of Bean hair in it.  It's very common for babies to lose their hair like this because they are born with fine hair.  Hopefully, her hair will start growing in better soon!) 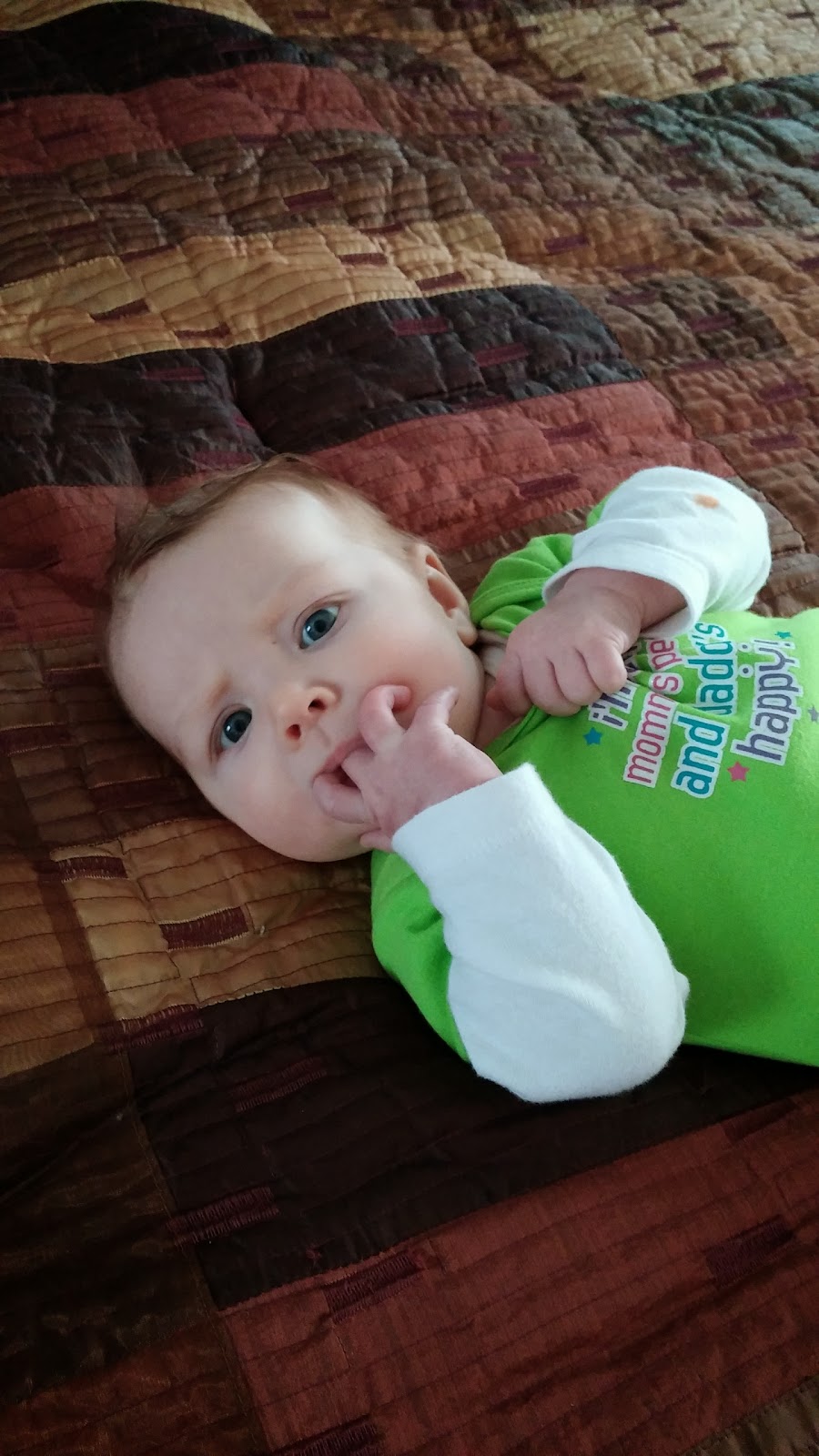 (Even though there are no signs of teeth poking up anytime soon, she is definitely in the beginning stages of teething.  She pulls on her gums a lot, constantly is sucking and chewing on fingers and toys, slobbering a lot, and sometimes is just very cranky and won't nurse.  I try not to give her Tylenol often.  But sometimes, she will cry while puling on her gums and I can tell she's hurting.  Tylenol always does the trick in those instances!)


She is growing up way too fast, but we are loving every minute of it!
Posted by Unknown at 12:18 PM