It is hard to believe that Steve and I have been married 5 whole years! It seems like just yesterday we were saying "I do" and starting our senior year at Purdue.  But a lot has happened in those 5 years - living in 3 different states, changes in jobs for both of us, home ownership, travelling the world, a baby, and so much more.  I wouldn't change any moment of it!

This past year from our last anniversary, has definitely flown by.  Our time is now consumed by our daughter.  Since having her, it seems like each day goes by faster and faster.  For our anniversary this year, Steve made it extra special by planning a weekend get-away -- Kid Free!

Leading up to the weekend, I was really nervous about leaving Bean.  It marked our longest time away from her as well as being away from her overnight! Steve has been away from her when he went on his business trip, but this was my first time.  It was easier and harder than I thought it would be at the same time!

Just hours before our departure to head to IN to stay with my parents for the night (Bean would stay with them the whole weekend), I was finishing up packing and about to put Bean down for her nap.  When I picked her up to go rock her, I realized she was really warm.  I took her temperature and it was 100.5.  Yikes!  I put her to nap and called the doctor.  I was guessing it was just teething (I had just given her Tylenol about an hour prior because she was cranky and drooling like crazy), but didn't want to risk it with us going away for the weekend.  The doctor just happened to have an opening in a half hour (and the office is 3 minutes from our house).  I let her sleep for as long as possible, then headed to the doctor.

The fever was confirmed.  The doctor came in and after a quick inspection declared she had hand/foot/mouth disease, even though she only had 2 spots in her mouth and the fever.  Since it is viral, there was nothing else to be done other than Tylenol & Advil around the clock.  Wonderful.

With plans set in motion, we cleared the sick baby status with Ahm & Abo (my parents) and headed their way.  Bean was a little cranky at first in the car, but then fell asleep.  We woke her up for a dinner stop, and then she played in the car the rest of the way -- perfect!

(You could tell Bean felt miserable.  For a good 30 min in the car, she just zoned.  She just stared and held onto her toys.)

She did extremely well that night, considering she didn't feel good.  She did wake up a couple times in the night (I woke her up once to give medicine & check temp).  Her fever went as high as 102.5 with medicine in her system - eeks!  I was quite nervous about the temperature, but knew there was nothing we could do for her and she was in safe hands with my parents.  So Friday morning, Steve and I headed up north to Michigan for the weekend.

We stayed at a B&B in Allegan, MI called Castle in the Country.  It was an old Victorian home turned b&b.  The breakfast they served was outstanding! Stuffed french toast, cinnamon rolls & quiche.  Yum-o! During the days, we traveled to surrounding towns to explore and eat.  We spent one afternoon in Saugatuck and the other in Holland.  In the 48 hours we were away, we ate at Hercules Bar & Grill, Salt of the Earth, deBoer Bakkerij, Captain Sundae, and Food Dance.  All of the food we ate was delicious, but I'd have to say my favorite was a toss up between deBoer and Food Dance.  deBoer was a dutch restaurant that served brunch.  We were still full from our b&b breakfast, but didn't want to miss out and ate there anyway.  It was delicious!  Food Dance used only local ingredients and made everything from scratch from hamburger buns to ketchup! 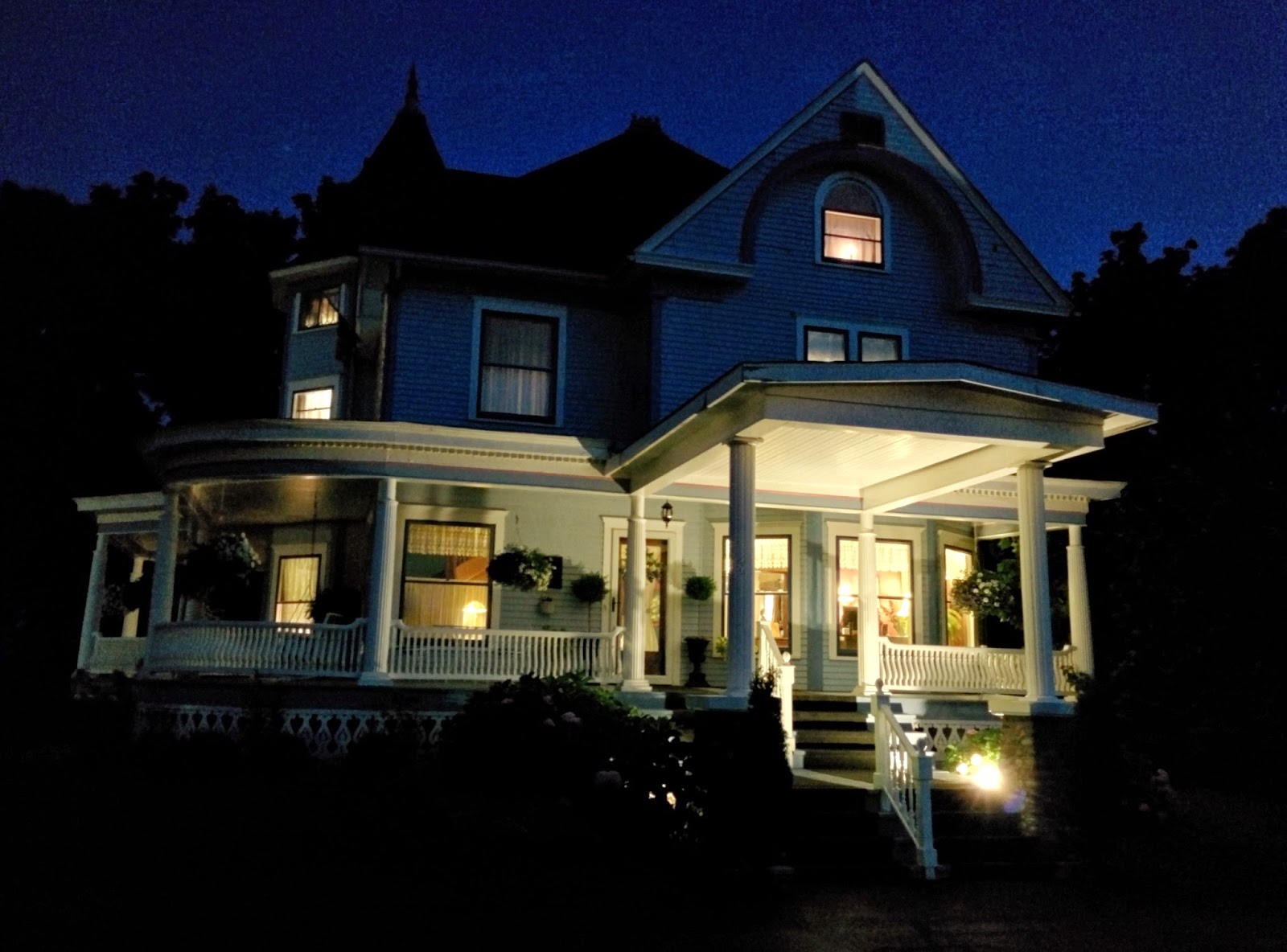 (Castle in the Country -- we stayed in the "Golden Tower" which is the upper room of the turret on the left.) 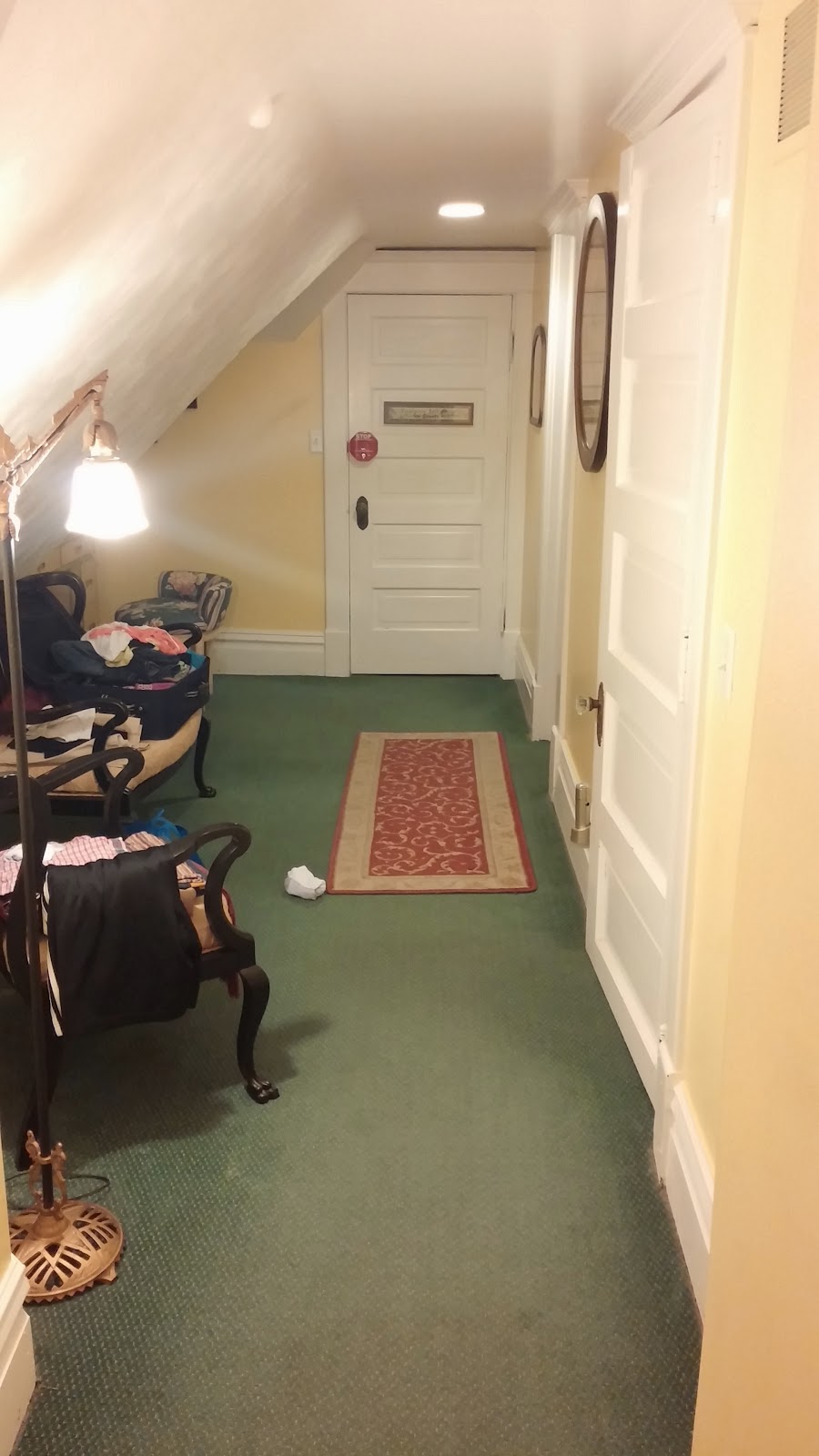 (Upon entering our room, there was was a hallway with the bedroom off to the left, a closet and bathroom to the right, and a little vanity at the end.) 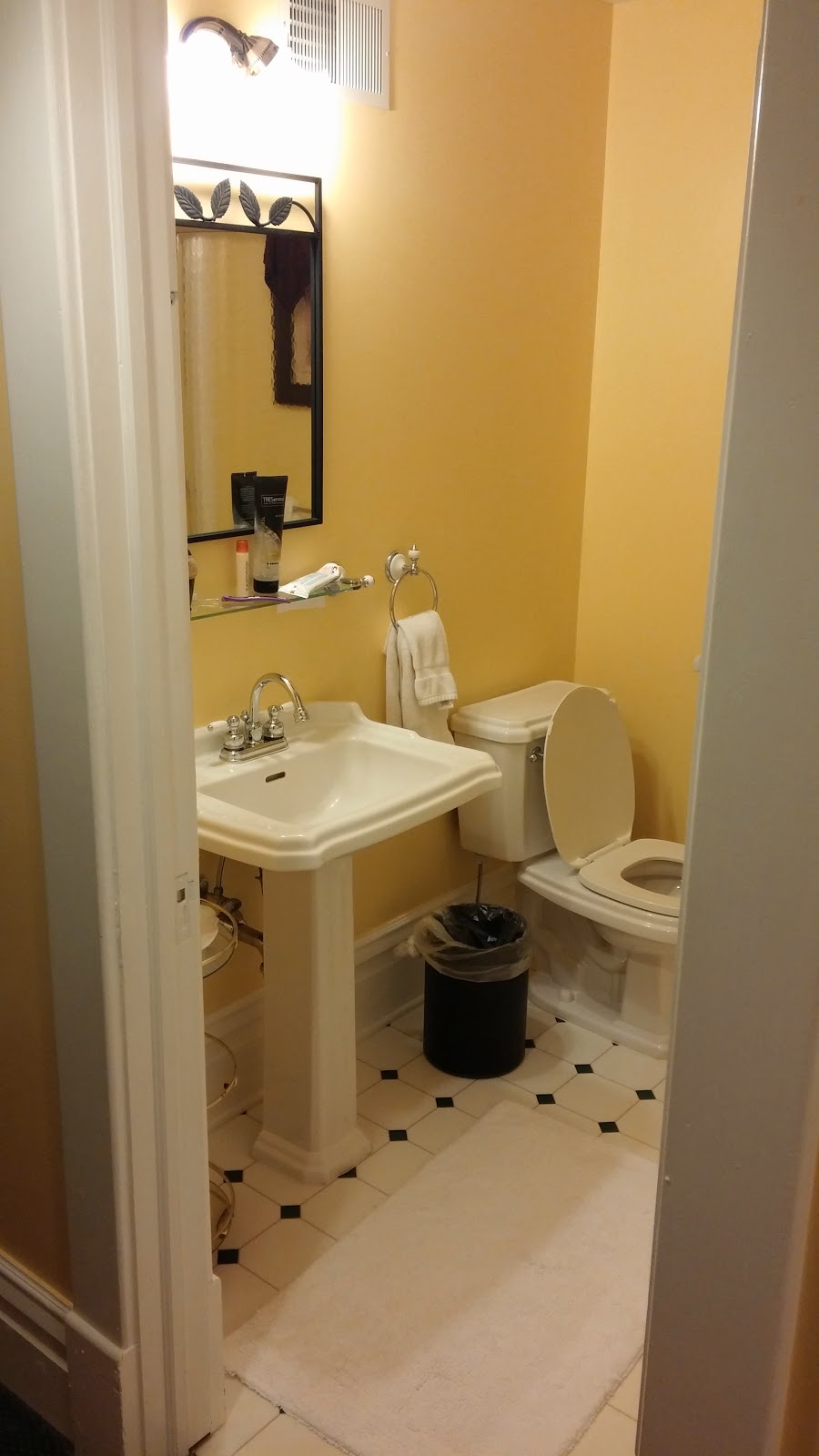 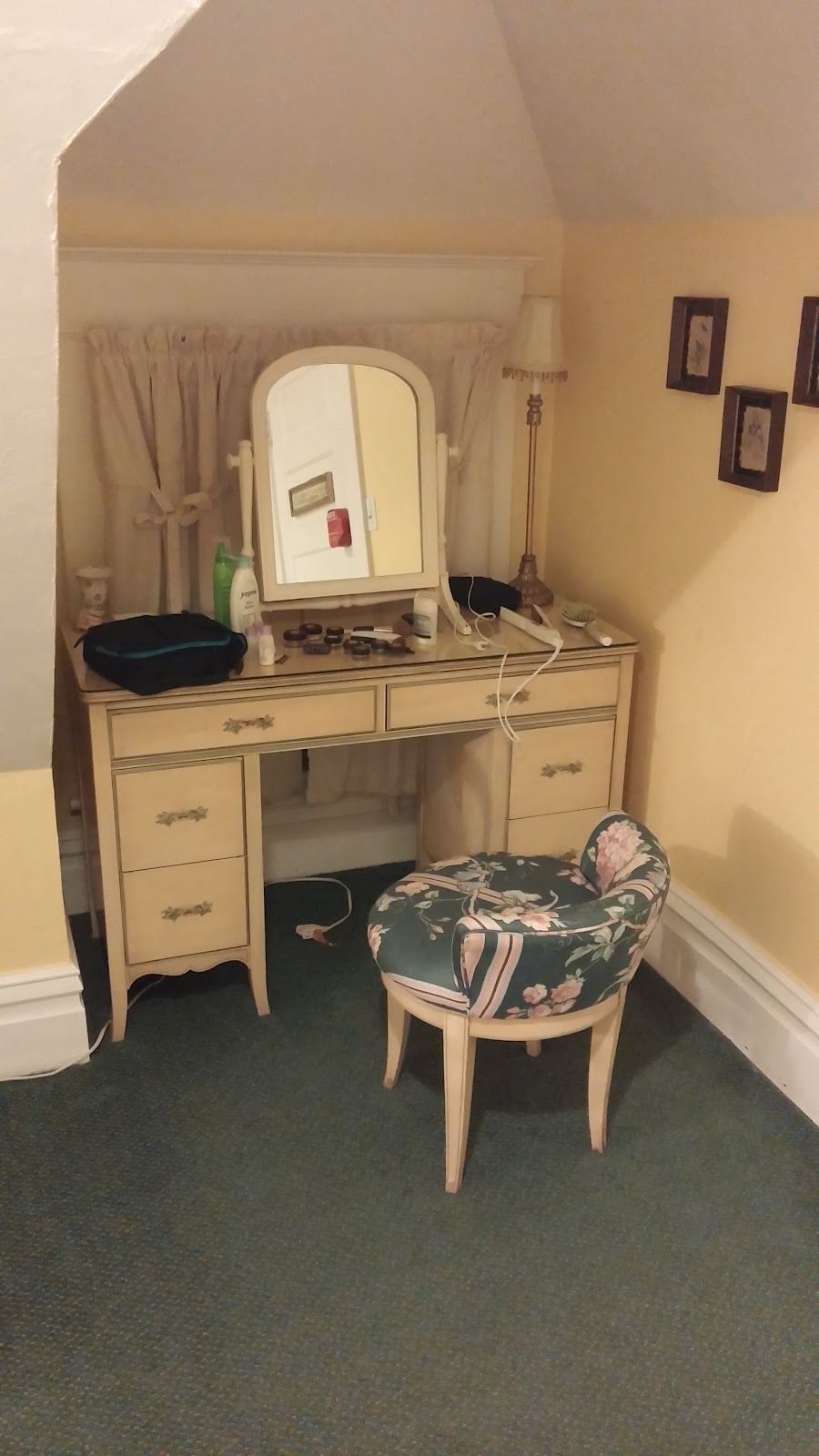 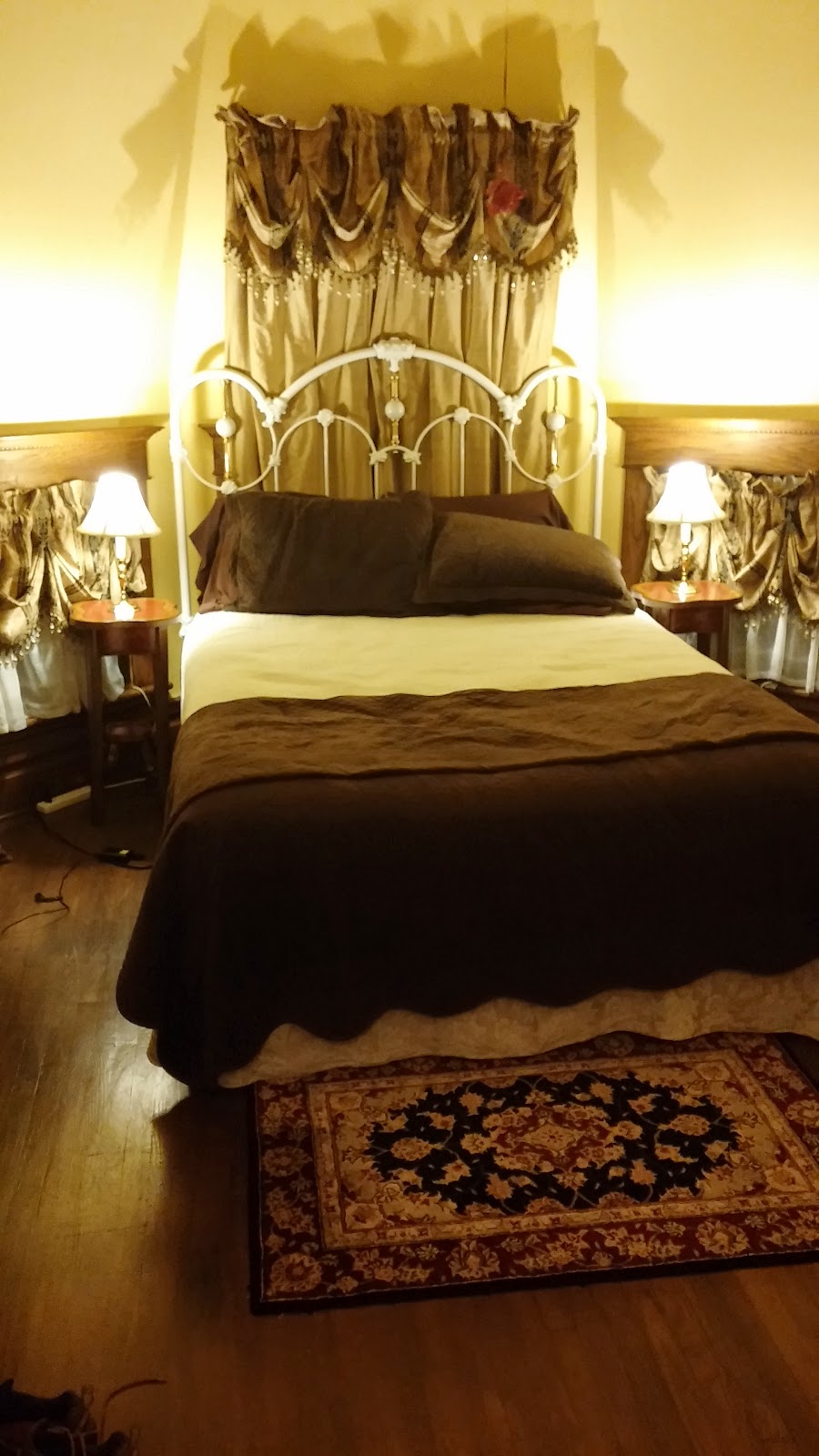 (The bedroom was in the turret, so the room was circular with a very tall ceiling.) 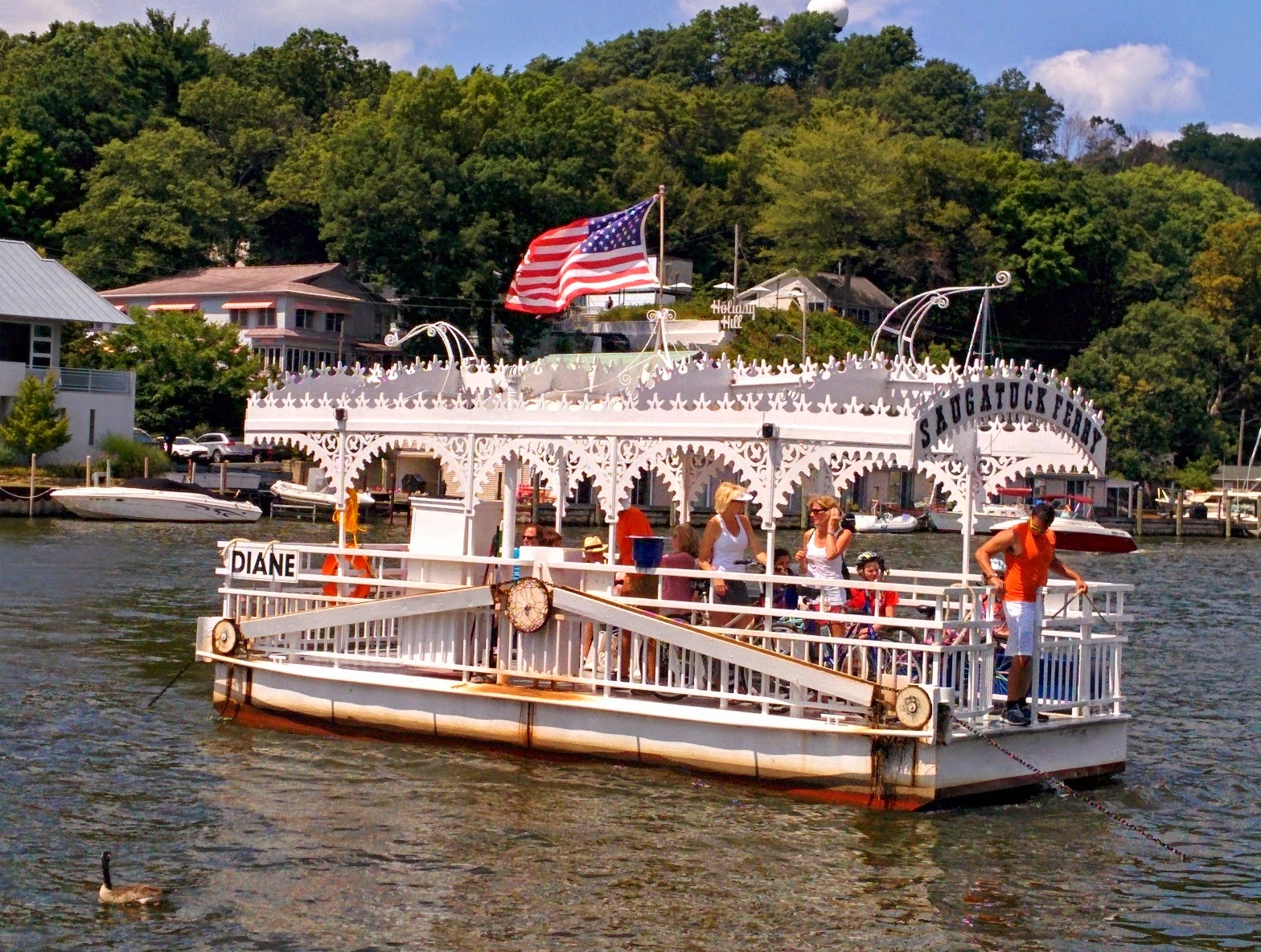 (While in Saugatuck, we took a chain ferry to get to the other side of the lake.  This is the only chain ferry in North America, and only 1 of 3 in the whole world! The ferry is cranked across the river via a chain that lays on the bottom.  You can see the chain on the lower right of the ferry.) 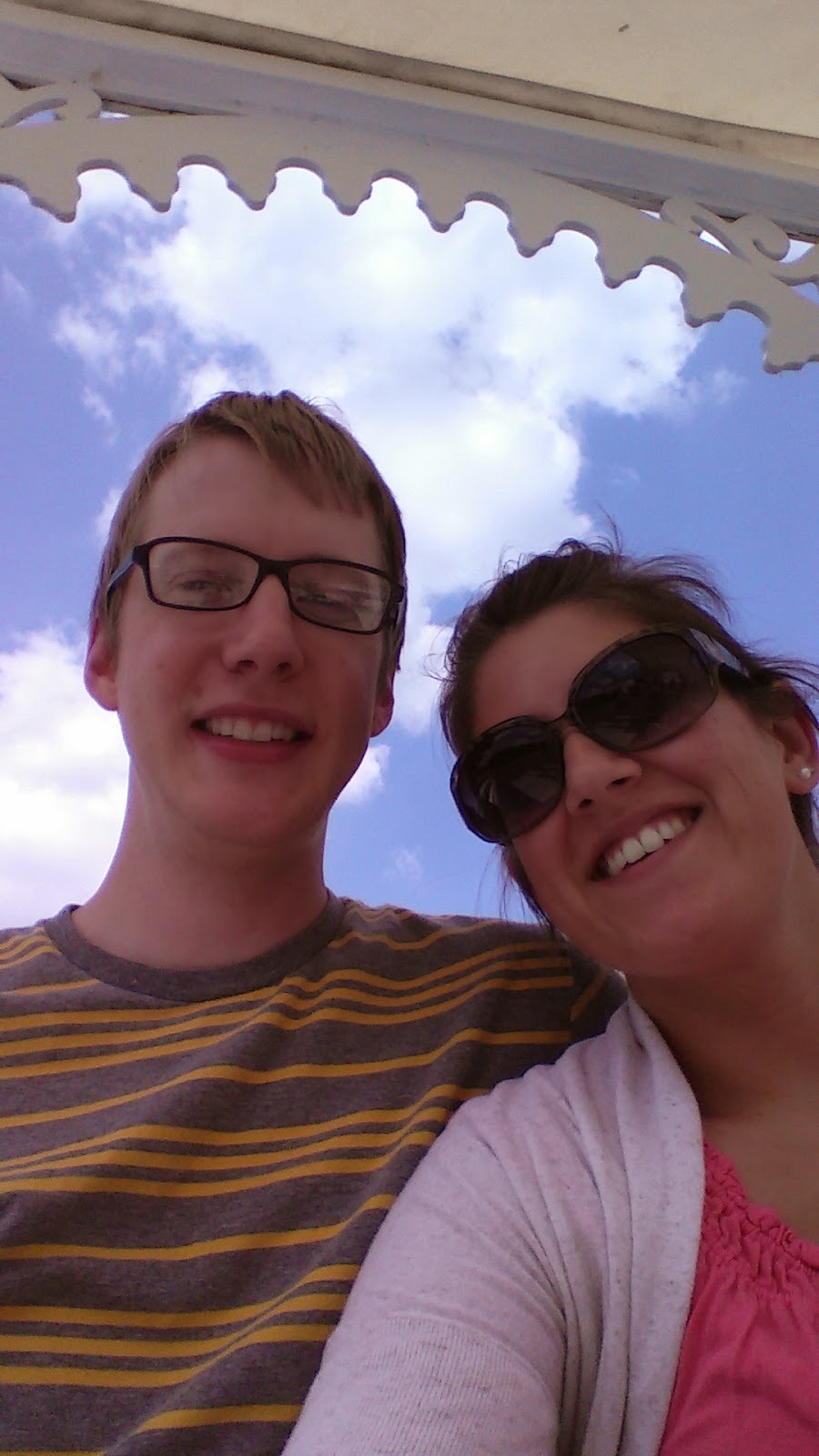 (Sitting on the chain ferry.  It only took a few minutes to get across the river.) 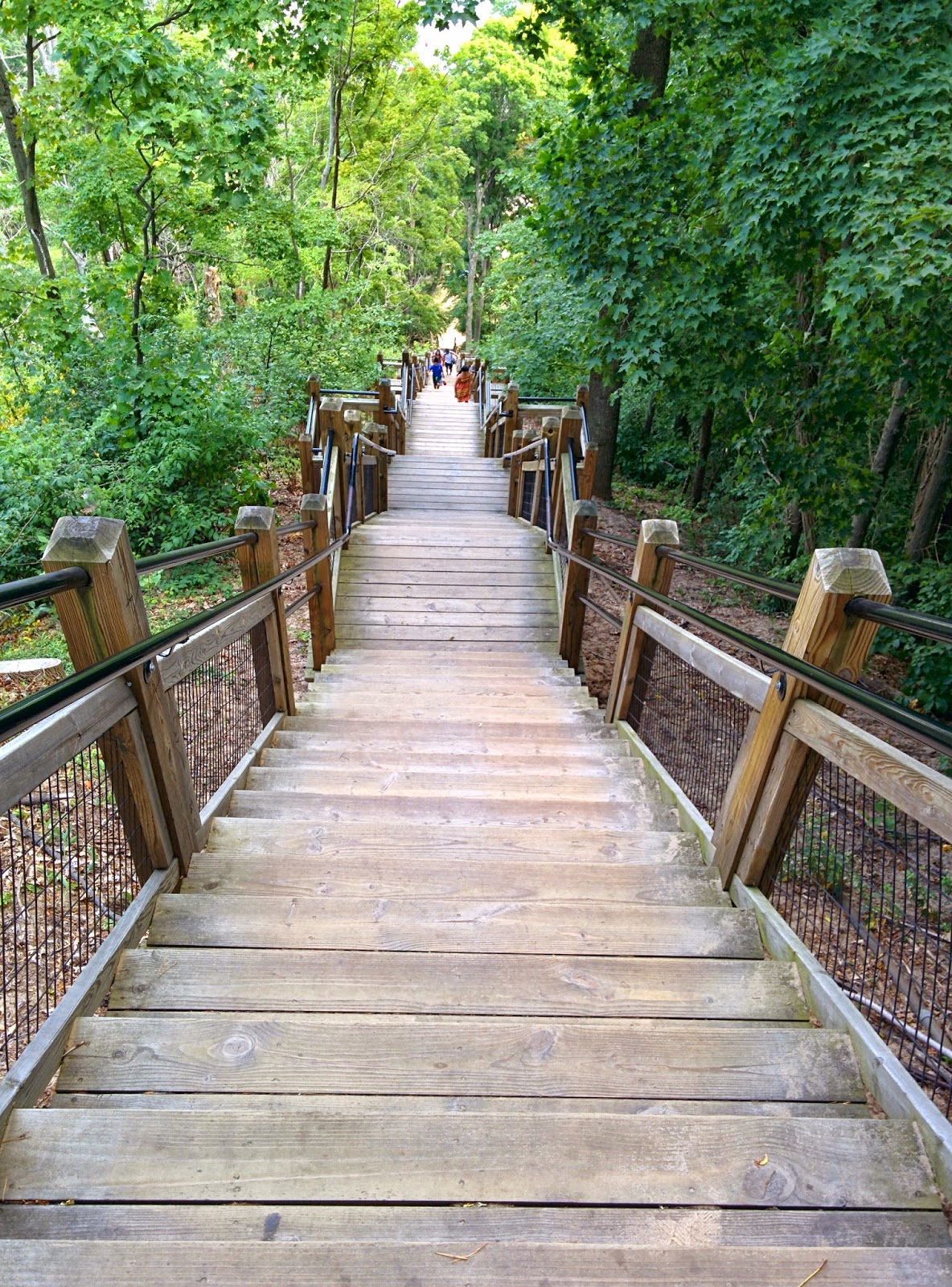 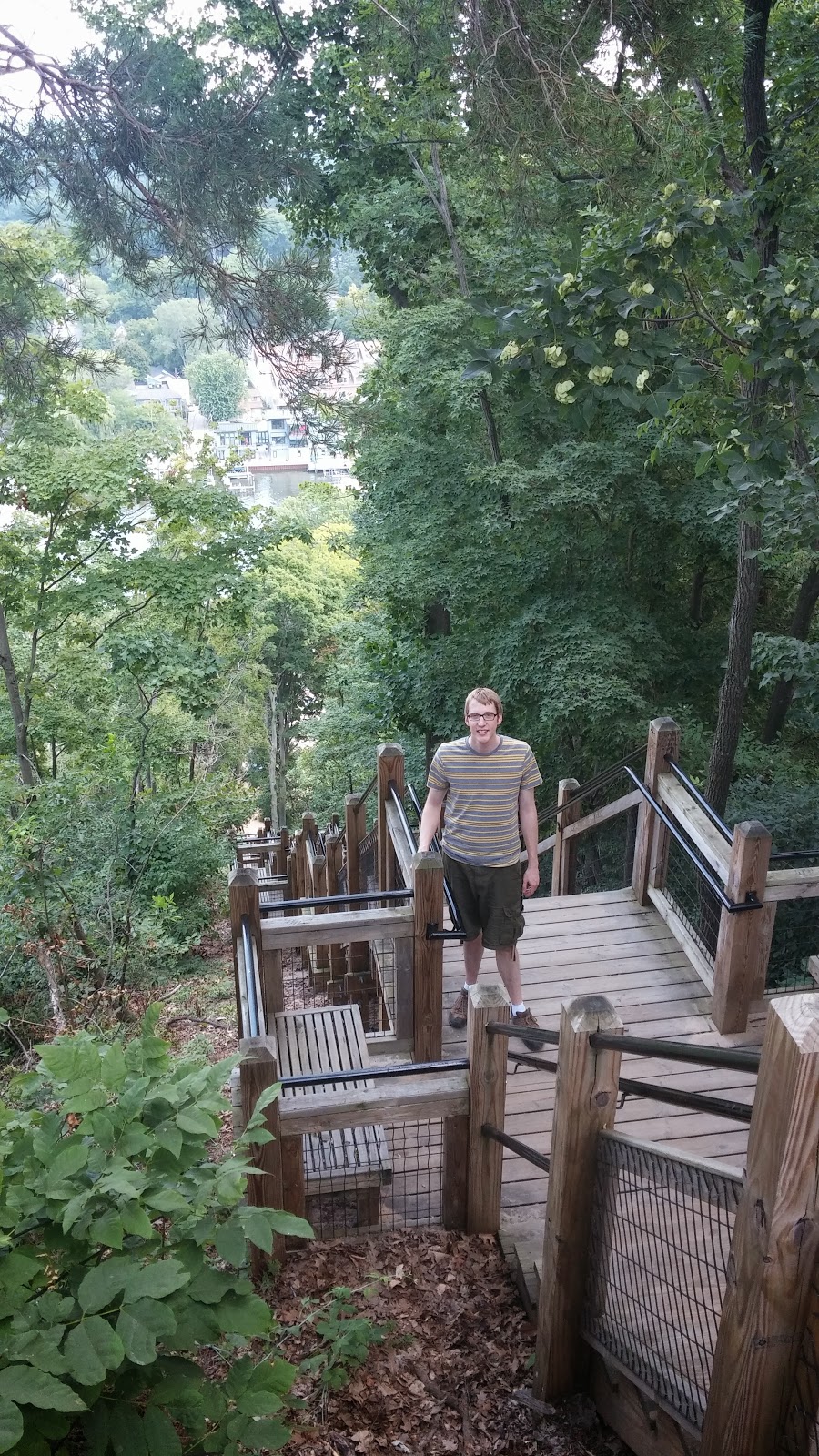 (Keep going Steve!  The steps really wouldn't have been that bad if it weren't for the fact that we were still recovering from our ridiculous run the weekend before.) 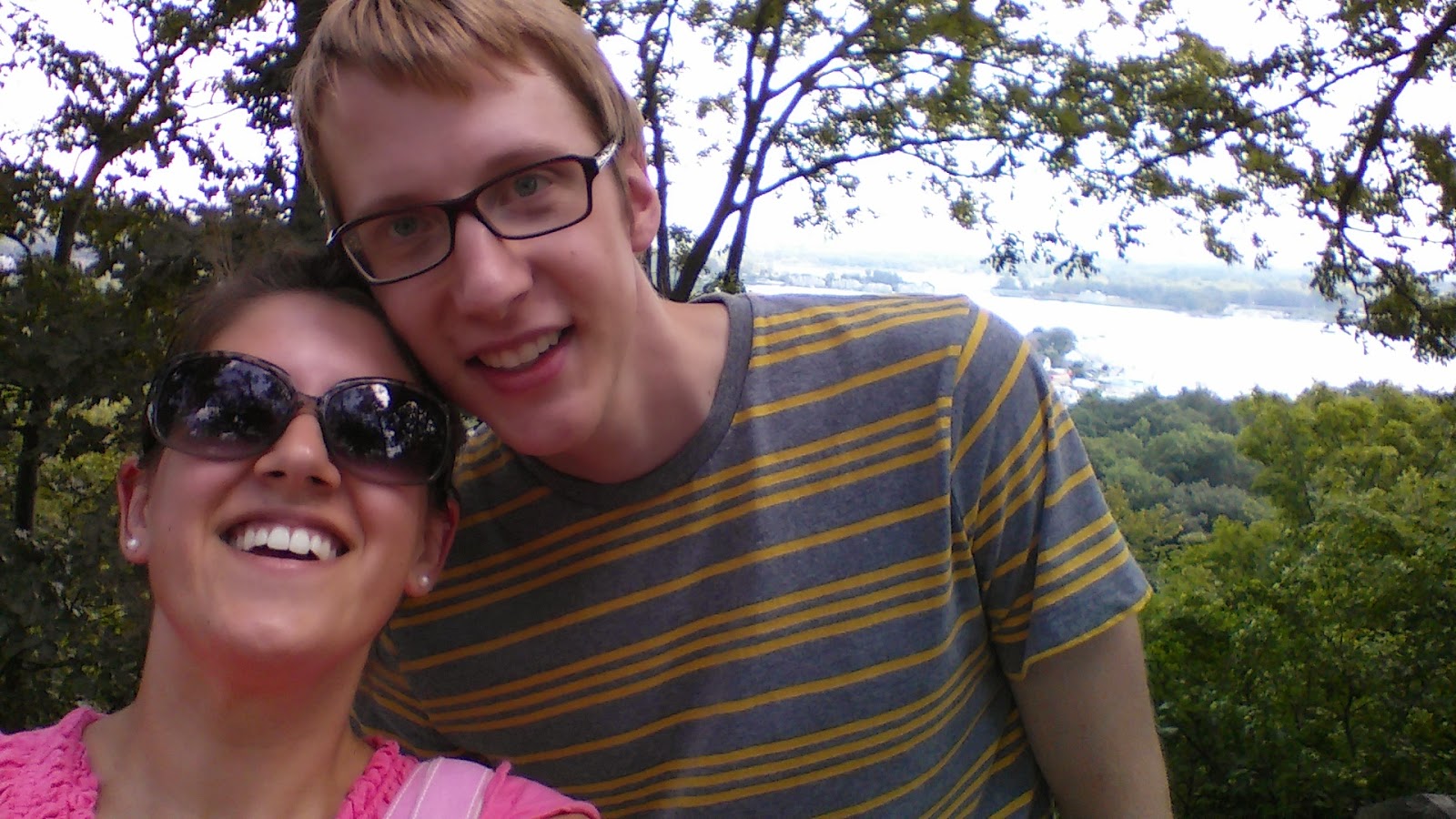 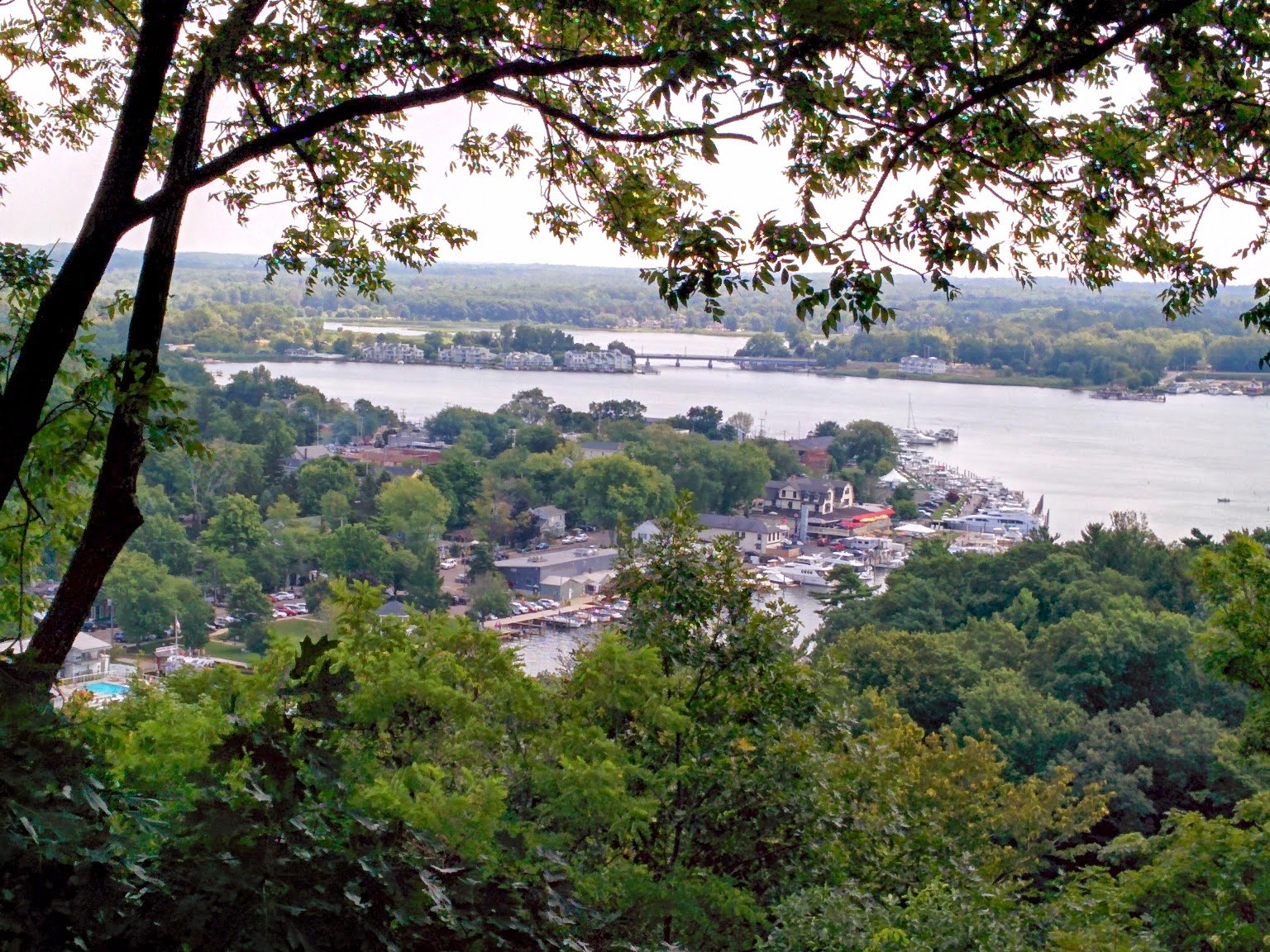 (Looking out over the lake and down into Saugatuck.)

(So I was a little hoodwinked in the whole, "oh you walk up some steep steps, then back down and we'll hang out at the beach."  I was prepared for sand, but not walking down steep sand.  I had to take off my flip flops, but then was all nervous about stepping on sticks.  Steve thought I was being hilarious and decided to capture my intense sand dune walking.) 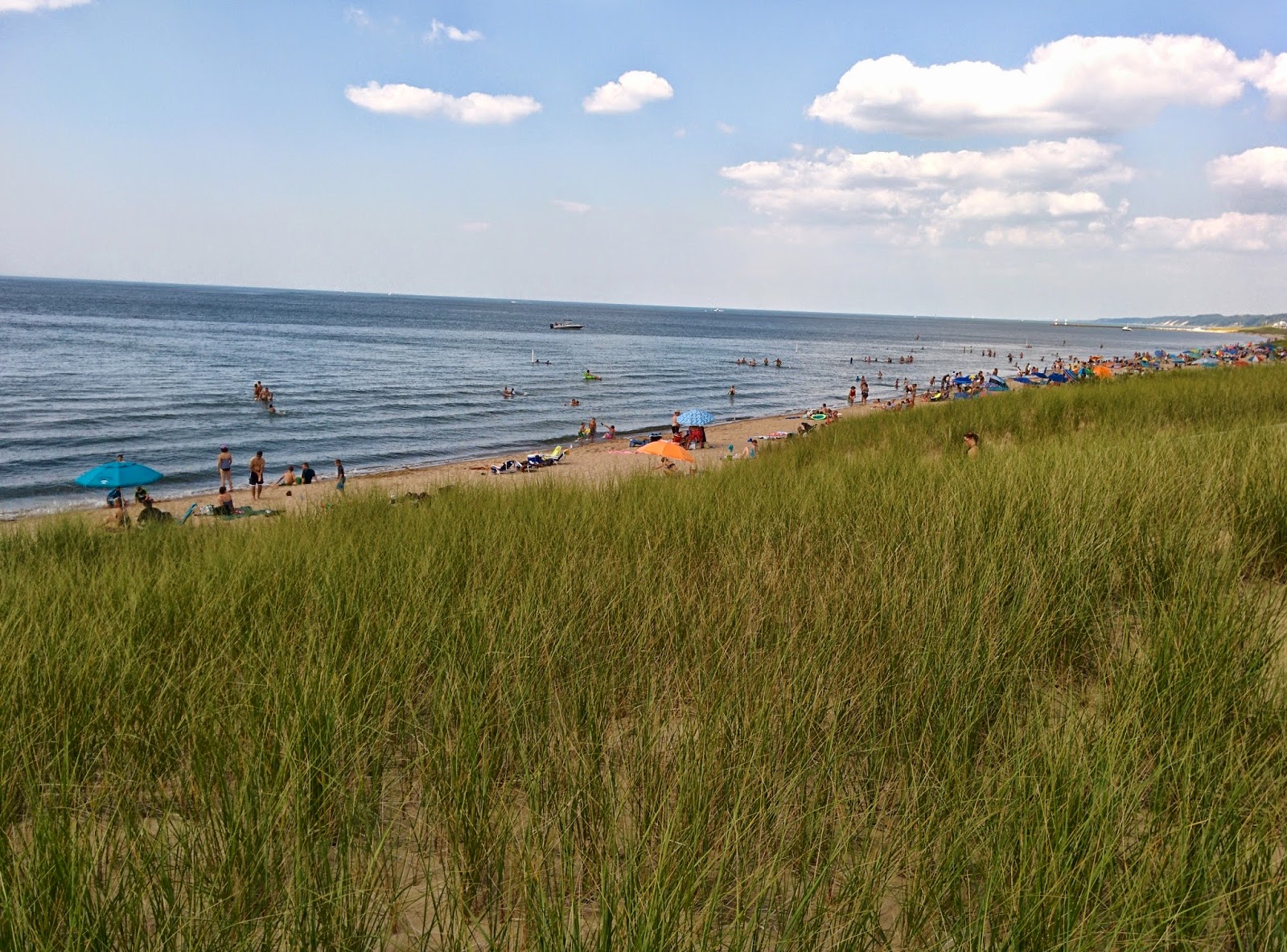 (Oval beach! The water was quite cold, but people were still in the water.  We sat on the beach a little bit and recuperated before heading back to the ferry.) 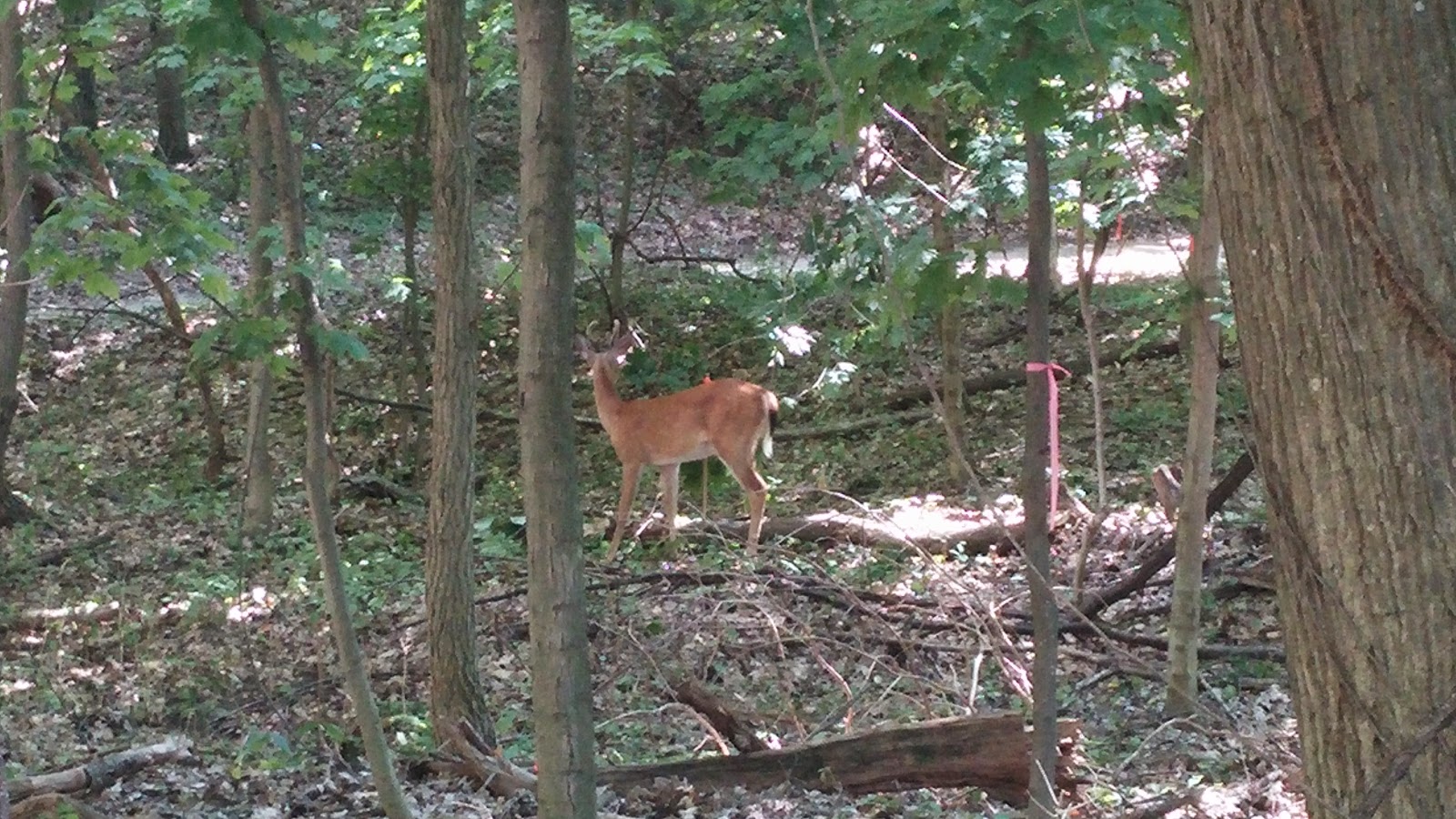 (So instead of walking back up over the hill, we walked around it, which ended up being quicker and easier.  Along the way, we saw my "favorite" animal -- a deer.  Throughout the whole weekend, we saw deer, wild turkeys, chipmunks, squirrels, birds, and rabbits.) 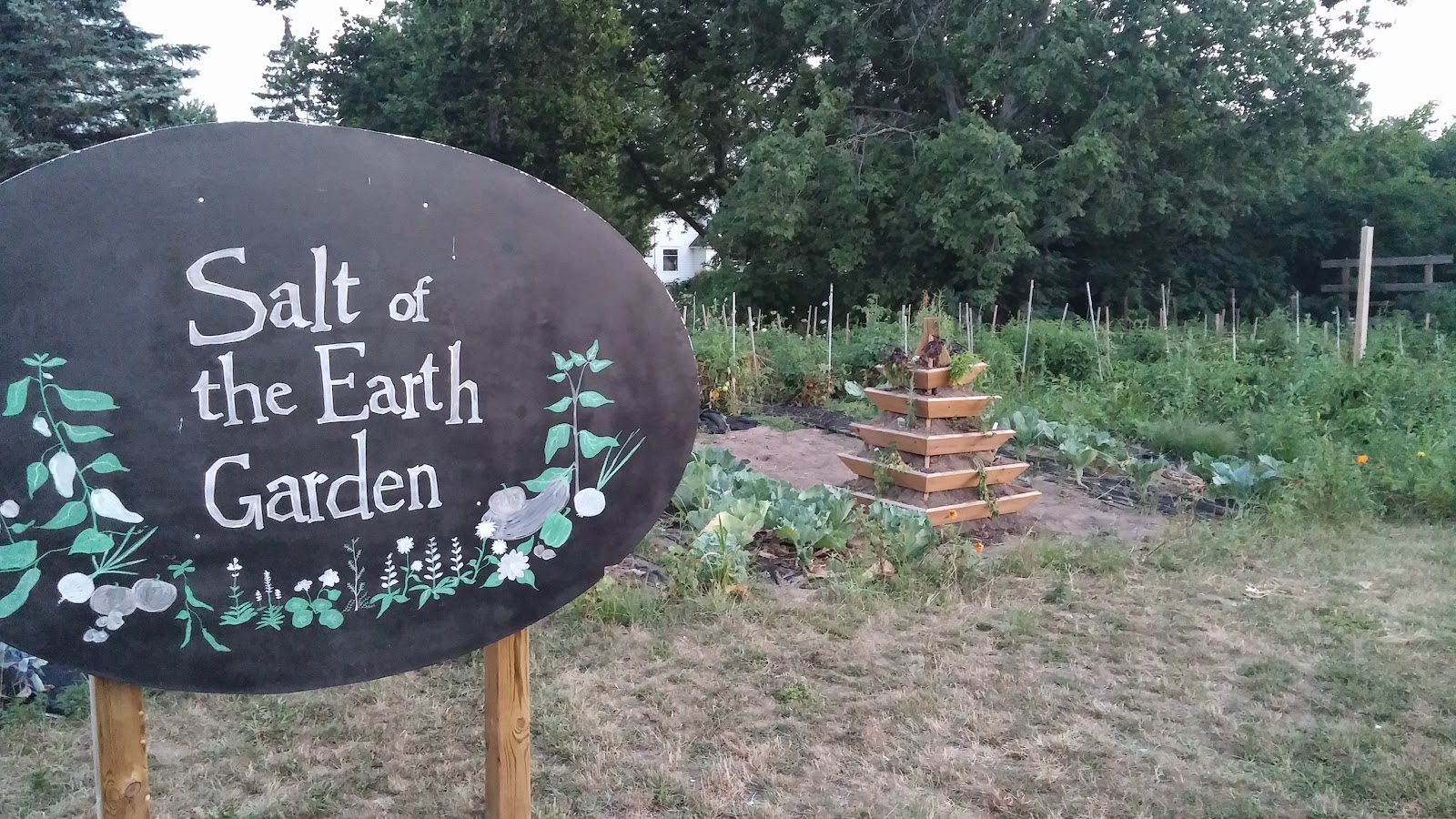 (After spending the day in Saugatuck, we headed to Salt of the Earth.  The restaurant has it's own garden outside that you can walk around and see where some of its produce comes from!) 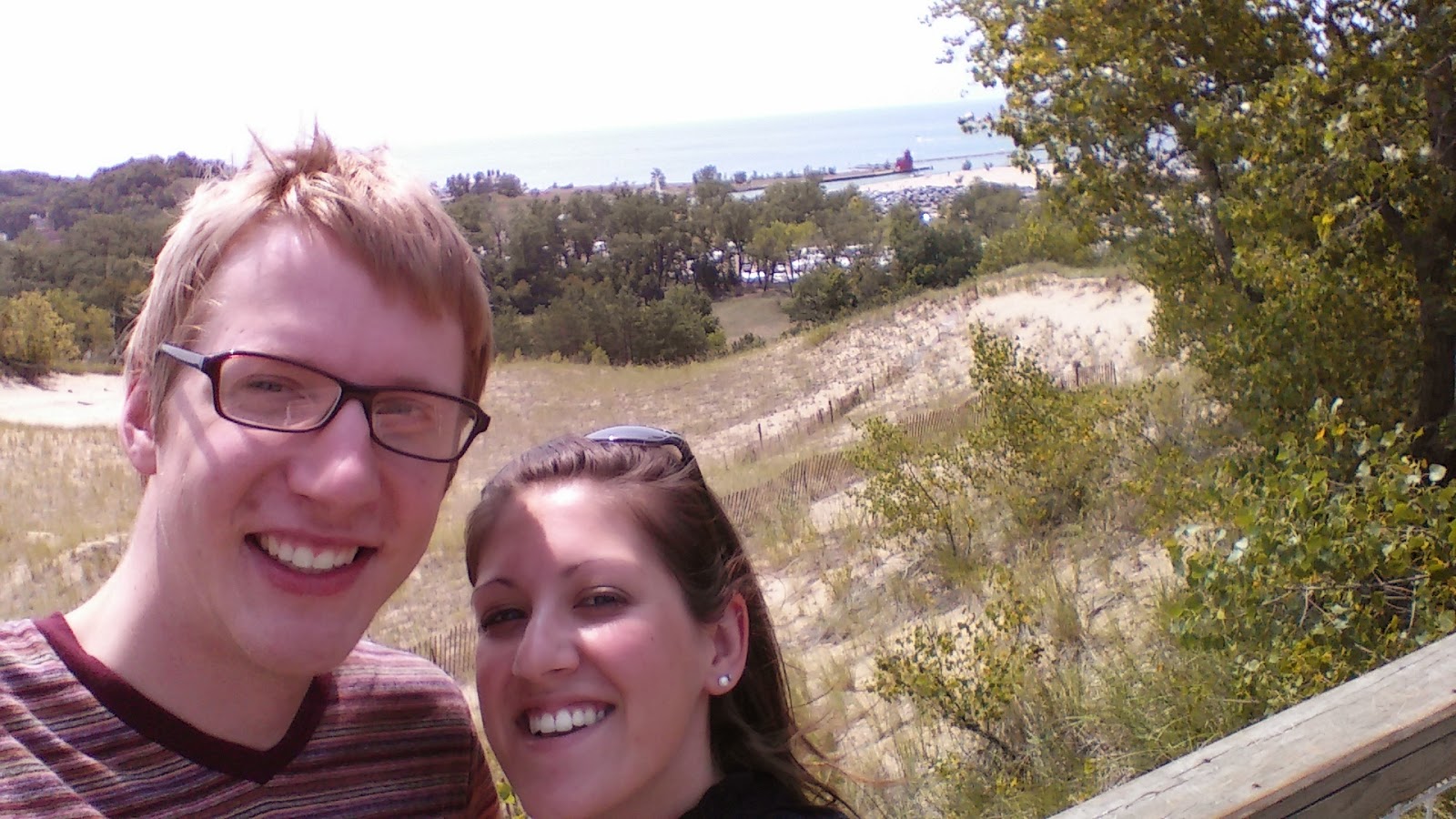 (The next day we spent in Holland.  After our brunch at deBoer's, we walked up another sand dune via steps.  Only these steps weren't steep.) 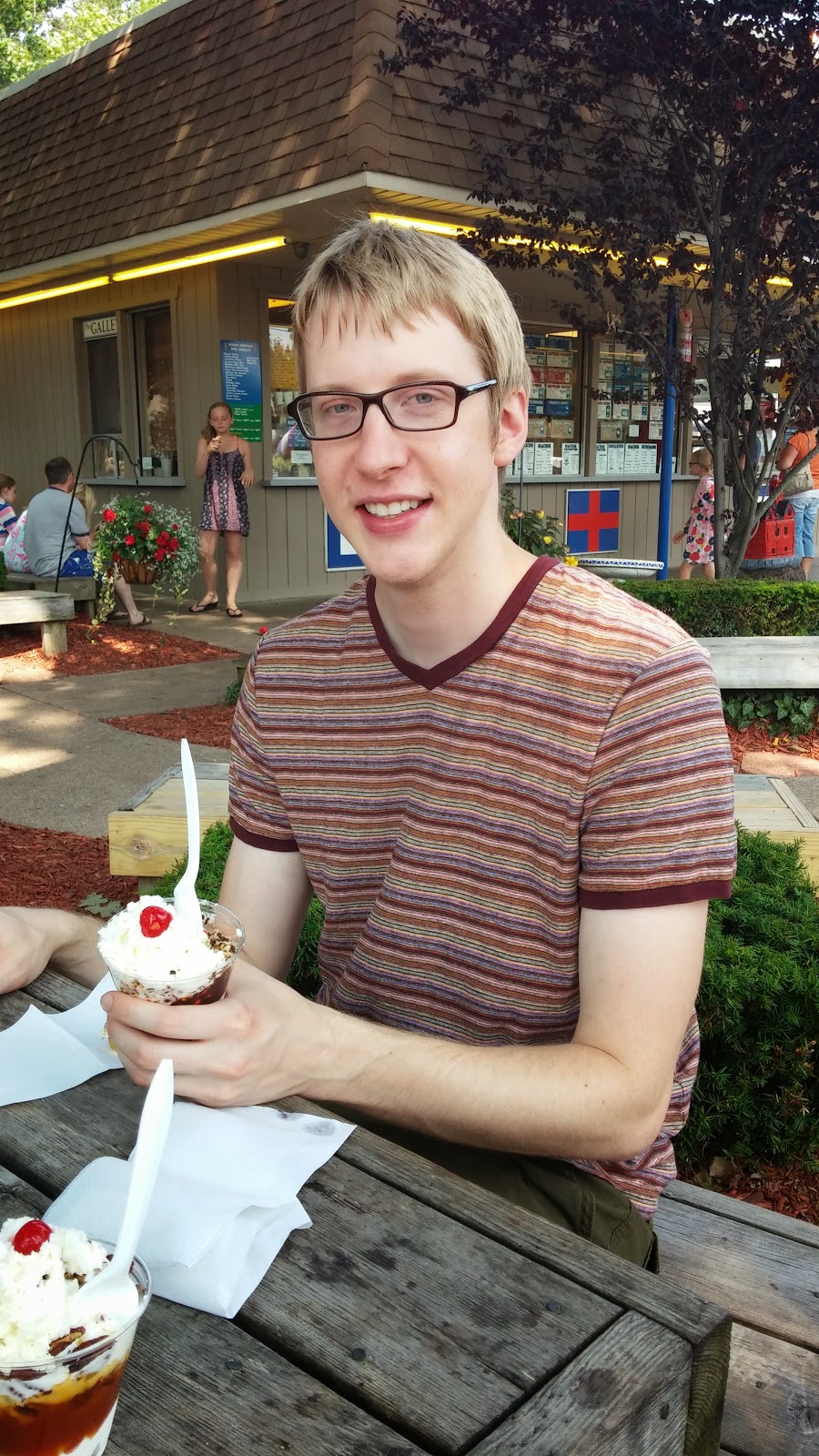 (After the little hike, we got some ice cream!) 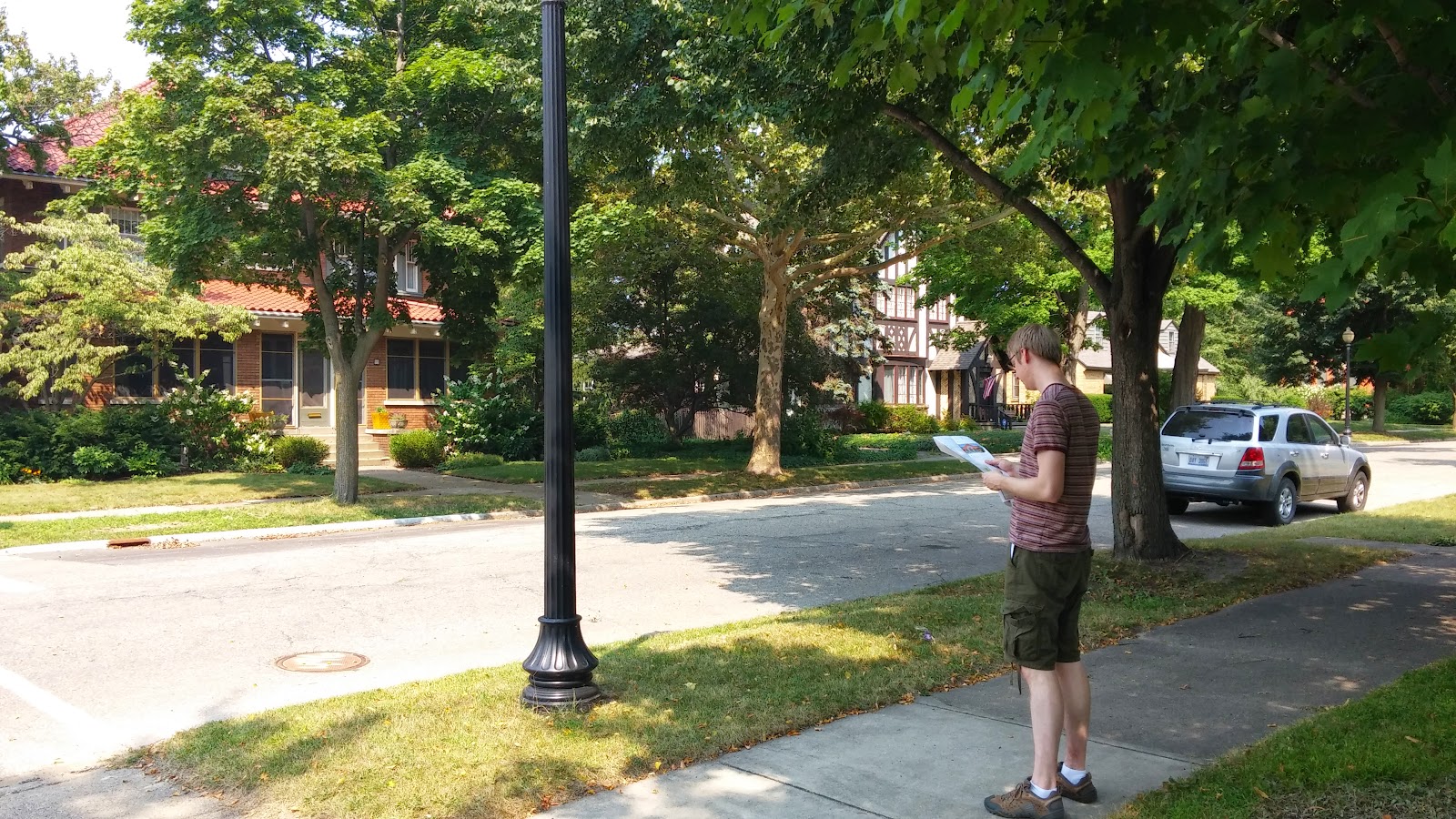 (And then we went on a walking tour of historic houses in Holland.  Steve loves walking tours and rather enjoyed this one.  I on the other hand thought, "seen one historic house, seen 'em all".  Okay, really I enjoyed walking around with Steve and watching him in his element.)


We got back to Bean a little after noon on Sunday.  We were very excited to see her and she how she was feeling.  Her fever had broke on Saturday and she was doing much better.  Everyone who saw her agreed with me - we don't think she really had hand/foot/mouth.  Not sure what it was, but she definitely had a touch of some virus.  We are very thankful Bean has been very healthy and think maybe she was over it so quickly from having a good immune system.  We hung around my parents for a few hours (we weren't ready to get back in the car), Bean & I even went swimming! 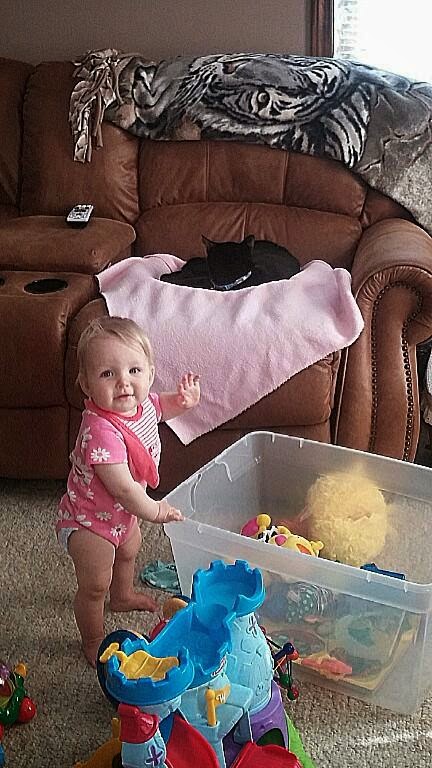 (What Bean was up to all weekend -- playing and being the center of attention!  Since she was sick, plans had to change and she was confined to the house.  That means no visitors - including cousins!  Poor Bean & Poor Ahm!  She now knows what my life is like in caring 24/7 for Bean!) 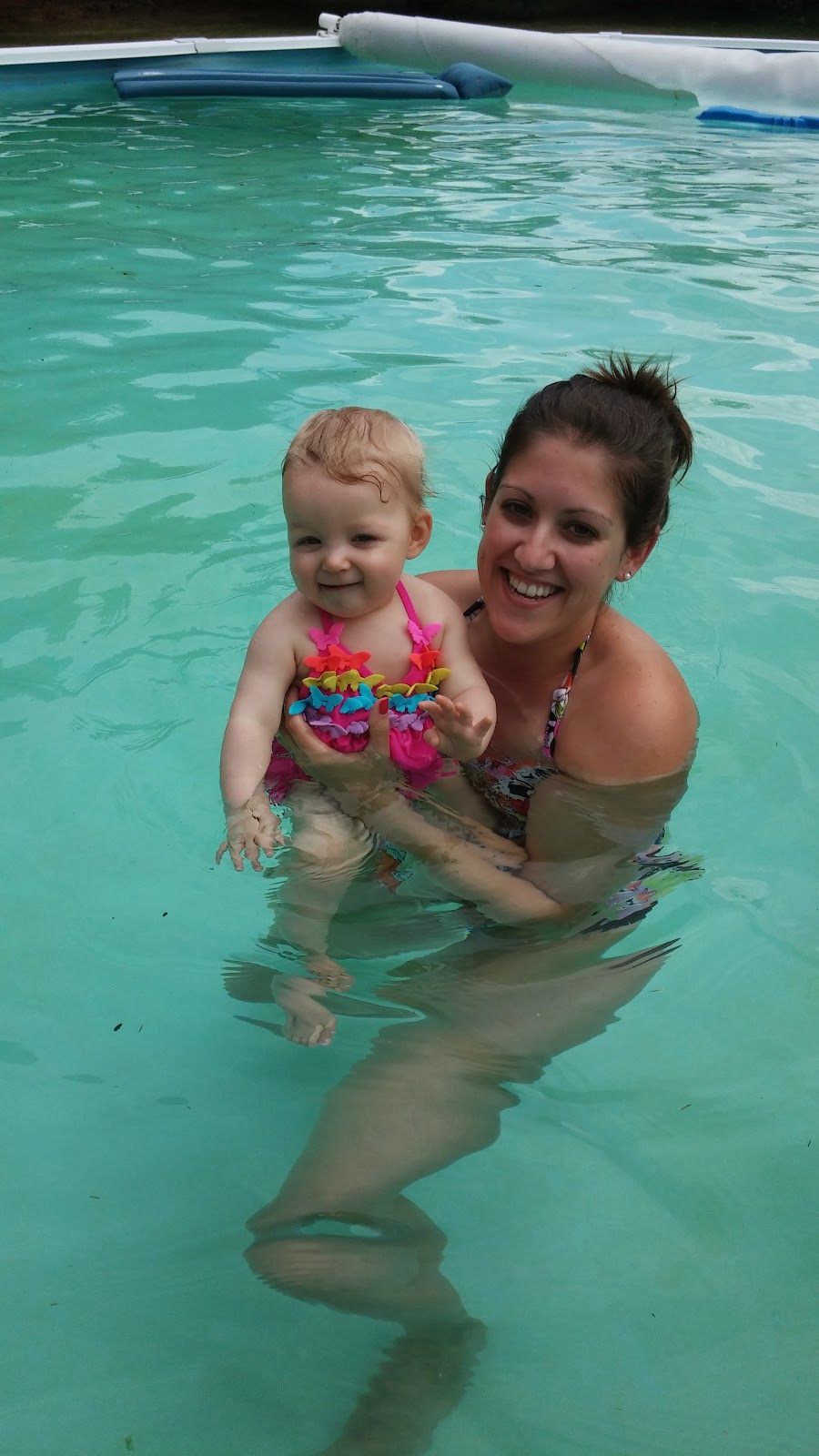 (We couldn't leave Ahm & Abo's without a dip in the pool!  This child is 100% water baby.  She would be completely happy if I let go of her and she could splash and play all by herself.  She just has to figure out the whole swimming and not drinking water first!)


I am extremely thankful that God has blessed my family in the way it has.  I have a very godly husband who is intentional about keeping our marriage strong, not just for us, but for our little girl.  I am looking forward to the next adventure with Steve by my side. Happy 5 years!

Oh, and I definitely won wife-of-the-year with my gift.  I was so excited to give it, I didn't care about what I got in return.  Steve and I try to keep our gifts along the lines of whatever the anniversary year is.  I.e. 1st year is paper, 2nd - cotton, 5th- wood. . . He got me a build your own bird house, which we'll do together sometime soon.  But here was my gift: 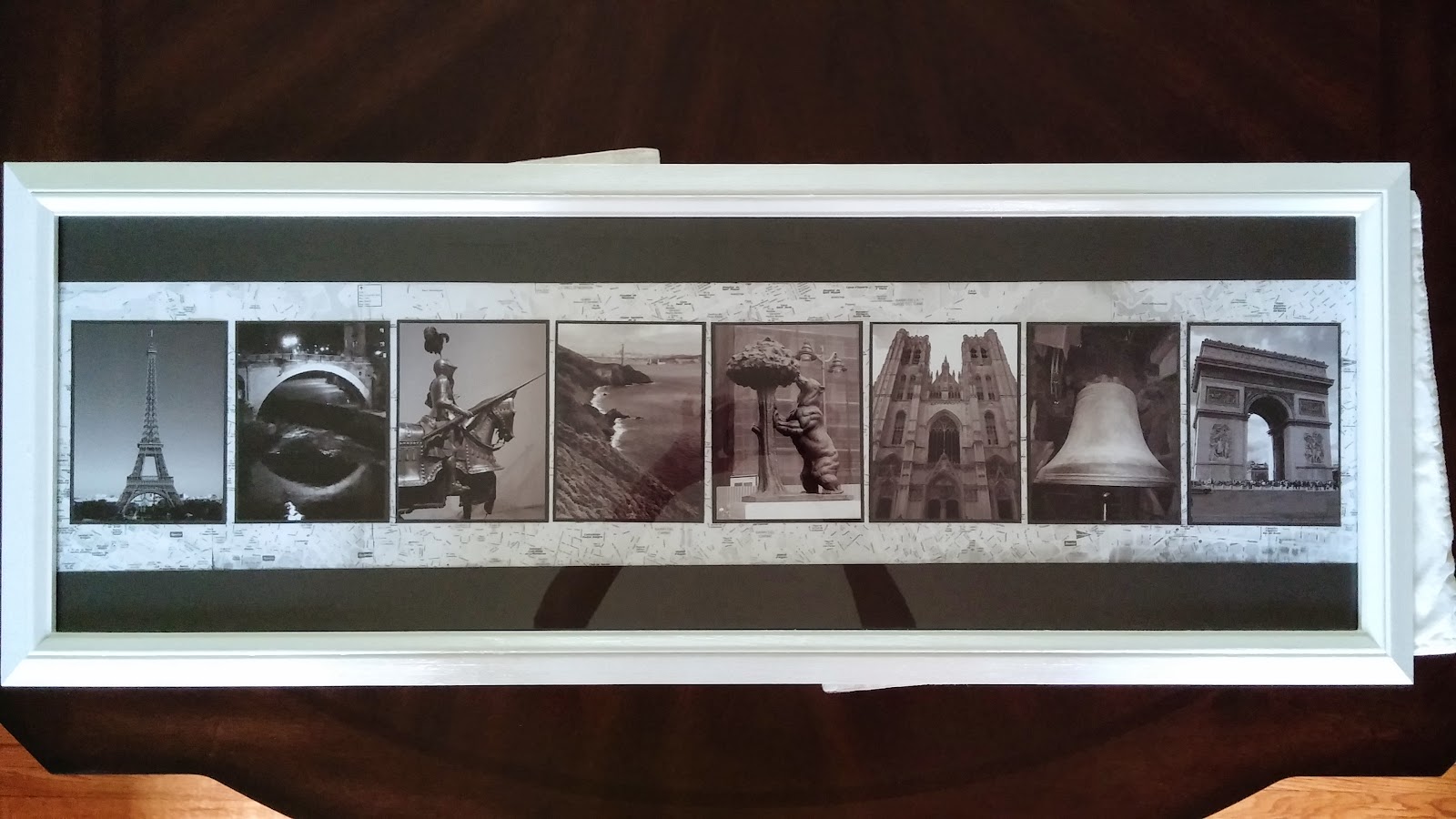 (I spelled out our last name using pictures from our previous trips:
A - eiffel tower in Paris
C - reflection of an arch on water in Rome
K - a knight on a horse in a castle in Segovia
E - coast line of Sausalito looking at Golden Gate in San Francisco
R - statue of a bear and tree in Madrid
M - church front in Brussels
A - Bell of Notre Dame in Paris
N - Arch de Triomphe in Paris
All of the pictures are on put on top of a map we used while in Barcelona.  Steve plans on hanging it up this weekend!)
Posted by Unknown at 12:46 PM