This past weekend, Steve and I did something crazy!  We ran a challenge race with 2 other couples.  We went in thinking it was going to be like an amazing race with physical and mental challenges at different stops.  However, it ended up being more focused on the running and race aspect, with checkpoints thrown in.  Most of the checkpoints just had a whole punch that you used to punch your score card.  However, there were some stops that made you do certain things (like find certain letters hidden around and spell out a word; decipher roman numerals; dig in sand for hidden paper; etc).

A couple days before the race, I ran a couple miles on my friend's treadmill just to see if I could run.  The last time I had ran was 2 years ago!  Eeks.  I survived the treadmill run, went crazy and bought a jogging stroller, and ran another mile around my neighborhood the night before the race.  I was semi-sore going into the race, but felt confident I'd survive.  Steve on the other hand is not a runner at all.  A year ago, he played on an indoor soccer league, but that is the extent of his physical activity.

The morning of, Steve's brother-in-law Scott drove up from Cincy to watch Bean for us.  I gave him a run down of what to expect with her, and we headed out the door to meet up with our friends.  We did some stretches (haha), talked strategy, and then it was go time!  So there wasn't a mass exodus of runners, they made you answer trivia questions first before being allowed to start.  I nailed one of the three questions (What color does tour de france leader wear?  GREEN!) and felt like an asset to the team. Ha!

We took off running and headed towards downtown.  We decided to go hit all those checkpoints first, then work our way back into the park and end at the finish line.  By heading to downtown first, that meant we had to do some real running from the start.  We ran about a mile with only a couple stops at stoplights and checkpoints.  The first mile clocked in at 10 min (which for the record, my previous 3 miles I ran that week were 15 min, 14.5 min, & 13 min)!  I was definitely the slowest person and had to do some walking, but would eventually catch back up.  I was hoping that my 6-month pregnant friend would be close to my normal pace, but I was dreaming!  She even had been having some hip pain and had to take it easy running.  Before our race, she randomly decded to do a dash for cash and ended up winning money with a 6.07 min mile.  Ridiculous!

After we got all the downtown stuff accomplished, we definitely slowed way down.  By this point, almost everyone was ready to slow down and enjoyed walking/jogging.  Steve was completely over running and ready to be done, but he was a trooper and kept in the team spirit through the end.  We had a hard time trying to find a couple checkpoints in the park (which had we found them, we would have ended up in 2nd place, but oh well).  We got to the finish line with just a couple minutes to spare!  After waiting around for the awards, we discovered that we won 3rd place out of 10 teams!  How awesome is that?!

I didn't take a single picture, but my friend Sara took some and wrote a great blog post about it!  A photographer took pictures at the race and loaded them on the Warrior Mode facebook page.  Here are the ones with us in them.  Thanks Gretchen White Photography for capturing some great moments from our first (and as Steve likes to say - last) race!  We also made the news!  We are seen running away right in the first few seconds of this news clip! 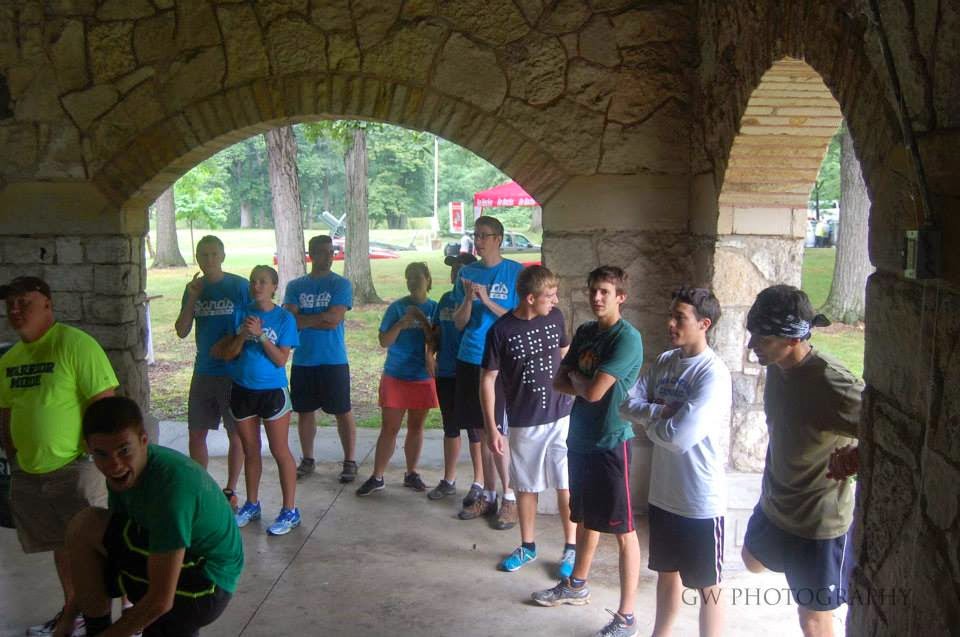 (Awaiting instructions and trying to employ any last minute excuses to get out of running.) 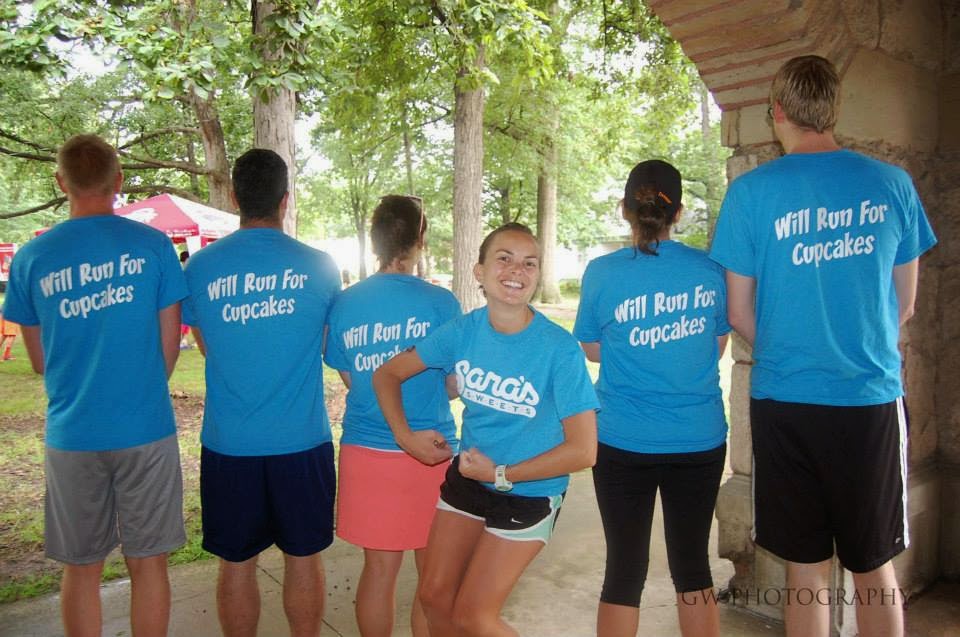 (Our team name was Will Run for Cupcakes, which by the way, I'm still waiting for those cupcakes!  After racing all over town, you'd think we'd get 1 cupcake! sheesh!) 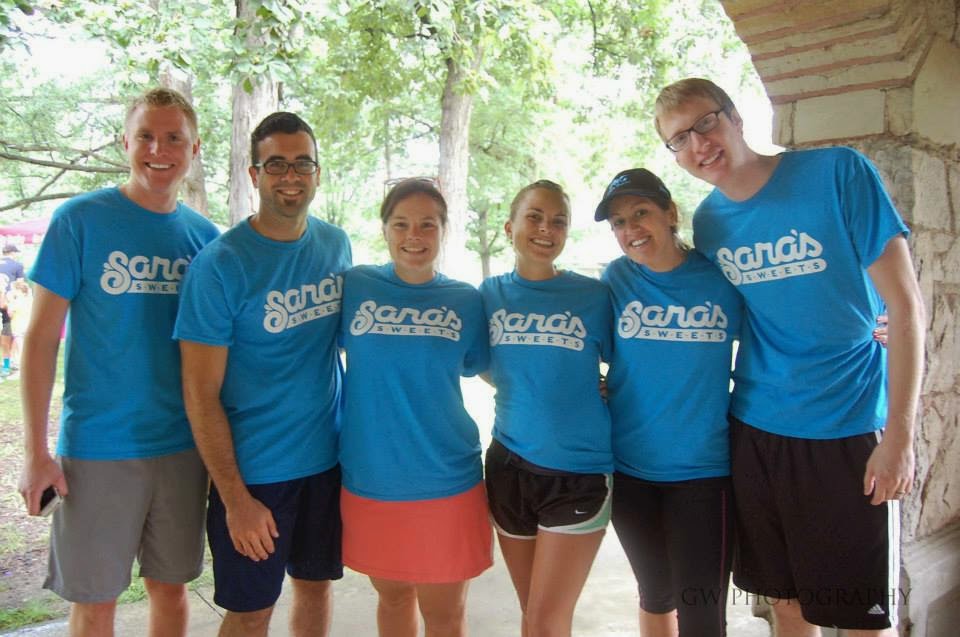 (Thanks Sara's Sweets for sponsoring our team, the shirts, and making us run, ha!) 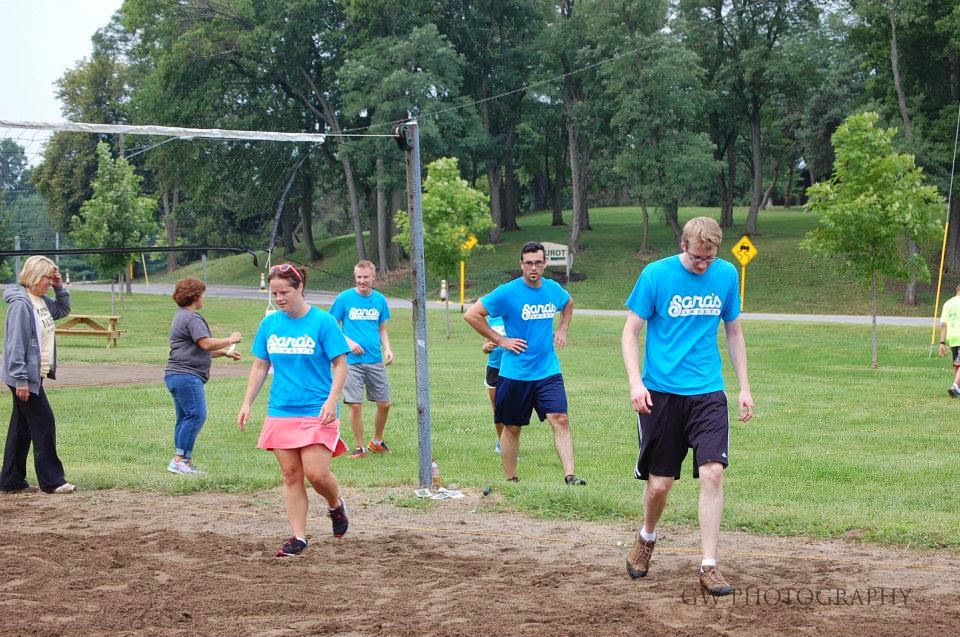 (Running to the sand pit to dig for a ticket.) 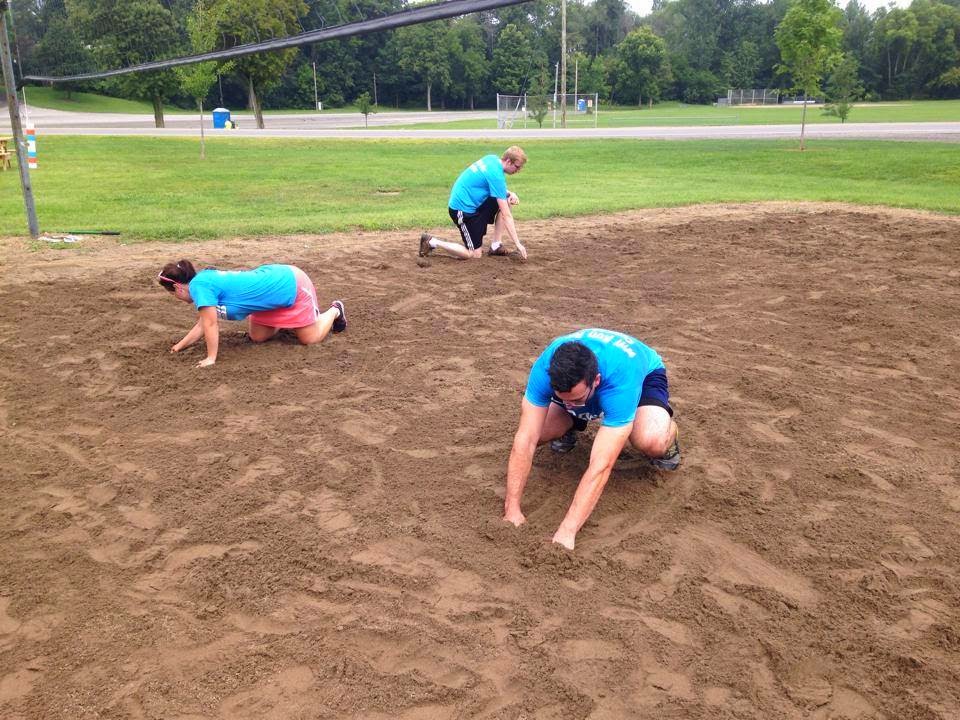 (Sara opted not to dig, and I'm situated out of picture to the left.  Chris and Rachel were beasts!  They ran up ahead to checkpoints, found crazy checkpoints, and were a blast to run with!) 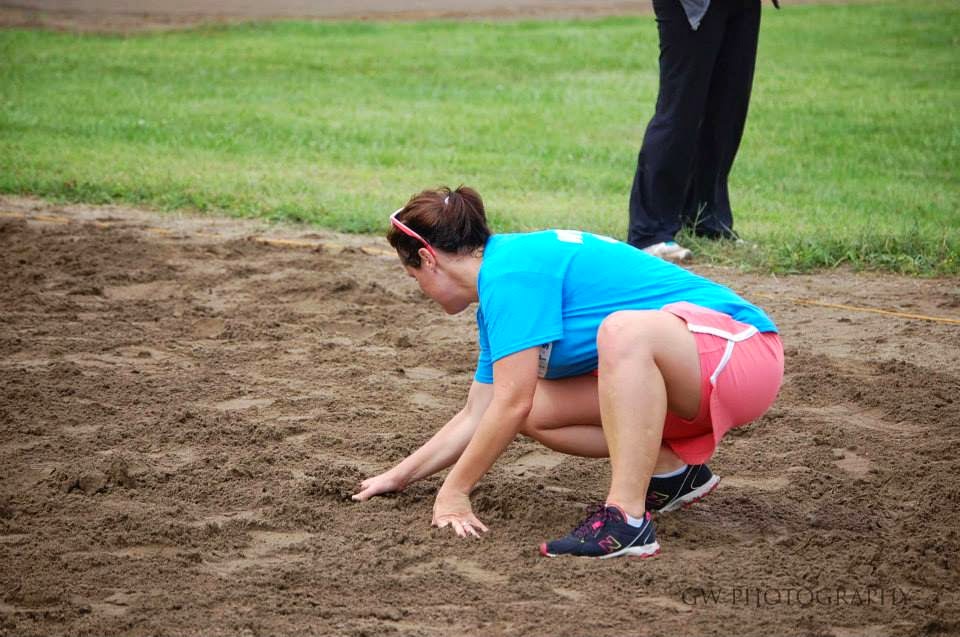 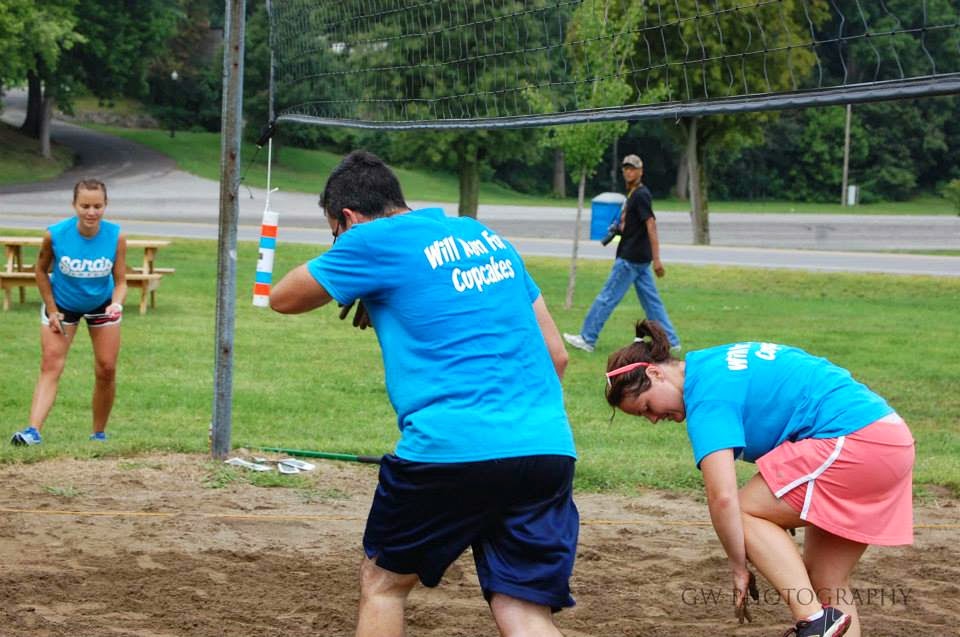 (Not only does Chris have eagle eyes and can spot a checkpoint from far away, he can quickly find random tickets burried in sand!) 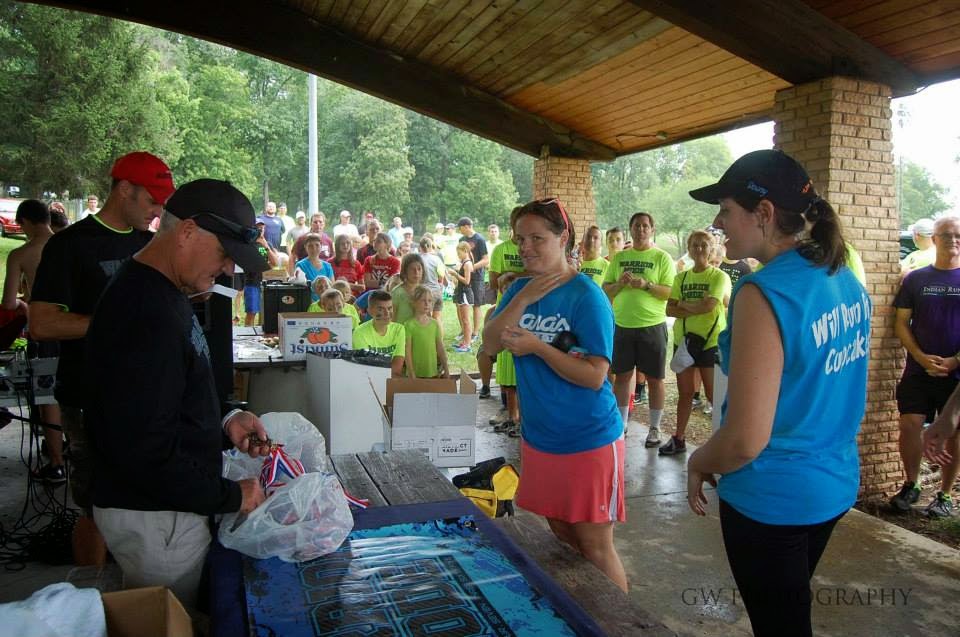 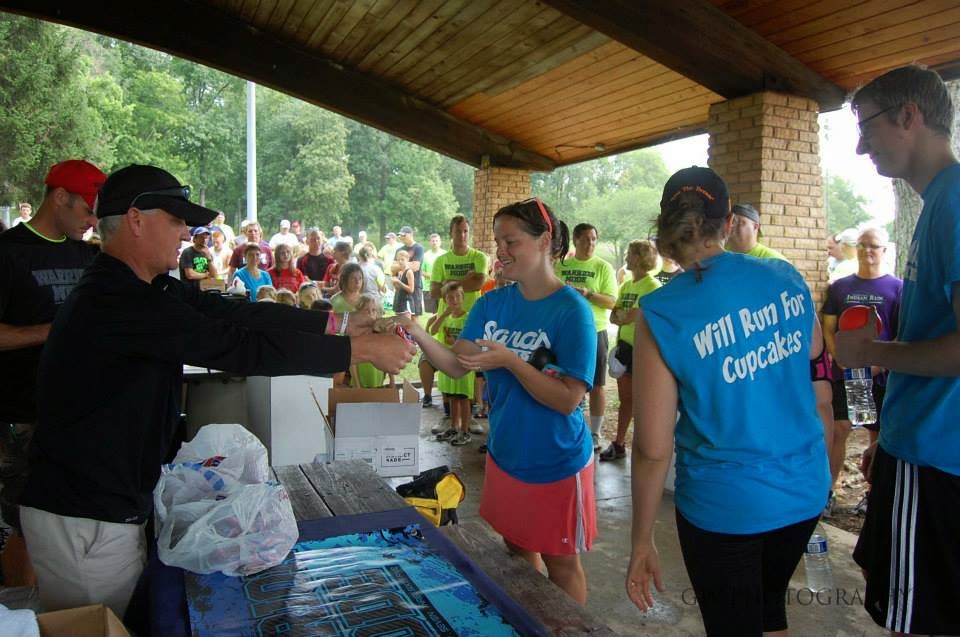 (Collecting our medals for the team!)

So will I run again?  Yes!  After all, I have a jogging stroller I have to break in.  Once my muscles loosen up, I plan on hitting the road again with Bean.  But this time, I'll be thankful I'm able to go at my own pace and not stress about the team.  Hopefully, I"ll be in much better shape for next year.  That's right Steve, I said NEXT YEAR!

And a HUGE shout out to Uncle Scott for watching and playing with Bean.  We are so blessed to have family nearby who will drop everything and come help us out!
Posted by Unknown at 9:03 PM