After 2 weeks of being really sick, I'm finally starting to feel like myself again!  I have had a super productive day today, and feel like I've gotten more done today than I did during those 2 weeks (not counting the fact that Bean's big birthday was smack in the middle of being sick!).  So I'll round out my productive day with a blog post.

Ever get so far behind with something, that you don't even know where to begin to catch up? I kind of feel that way with the blog.  A LOT has happened in the past 2 weeks, and I'll try to catch up in an organized way before more stuff happens.  Sorry it's really long and sort of pointless.  Ha - you have been warned.

So back to 2 weeks ago -- I got to sneak in a girls trip to Columbus with my good friend Sara, even though it was the start of an insanely busy week.  I'm glad I went with her because I was able to get fitted for GOOD running shoes (which arrive tomorrow and I'm SUPER excited!).  When I got home that evening, I wasn't feeling the greatest - my throat was hurting - but just chalked it up to talking a lot.  The next morning, I woke up feeling awful.  I finally gave up my delusion that I wasn't getting sick on Wednesday morning.

On Wednesday, Bean had her 1 year appointment. I was able to get me an appointment along with her (we have the same doctor - so practical!).  I discovered that I had the beginnings of a severe sinus infection and got a prescription for an antibiotic. Bean checked out at just over 20 pounds and 30" in length.  She's growing at a perfect rate!  She also showed some signs of possibly getting what I had, so I was given a prescription for an antibiotic for her, just in case.  She didn't have a fever, so they went ahead and gave her 3 shots.  Poor girl!

That night was awful! (for both her and me).  By dinnertime, I went ahead and started her on the antibiotic.  I figured with her birthday party just a few days away, and me being so sick.  She wasn't just going to bounce back from the runny nose she'd been having.  By bedtime, she was pretty miserable, but not from being sick - from those shots!  She got up a bunch in the night screaming-- at one point, she was shaking and screaming so hard, that I had to wake Steve up.  I couldn't get her calmed down and was starting to freak myself.  He was able to snap her out of it. While he was calming her down, I moved the guest bed to be up against the wall and set up a bed for Bean and I to sleep together.  Typically, this scenario turns into her playing and climbing all over me; however, this time, she snuggled right next to me, but kept whimpering.  So at 2am, Bean and I were snuggled together in bed watching Curious George.  After an episode, I turned it off and we both fell asleep.  A little bit later, she woke up again crying. Another episode (or maybe 2, I sort of fell asleep, ha) calmed her down.  I turned it off and we both slept until morning.

With 2 days until Bean's big party, I wasn't sure what to do.  I had invested so much time and energy into pulling it all together by that point.  Really all that was left was picking up a few things around the house and some of the food.  My family was planning on coming Friday evening.  So I knew that they could help pull the final stuff together.  What a help they were! We got the party pulled together (despite my thinking the party started later than it actually did, but more on that in another post!). 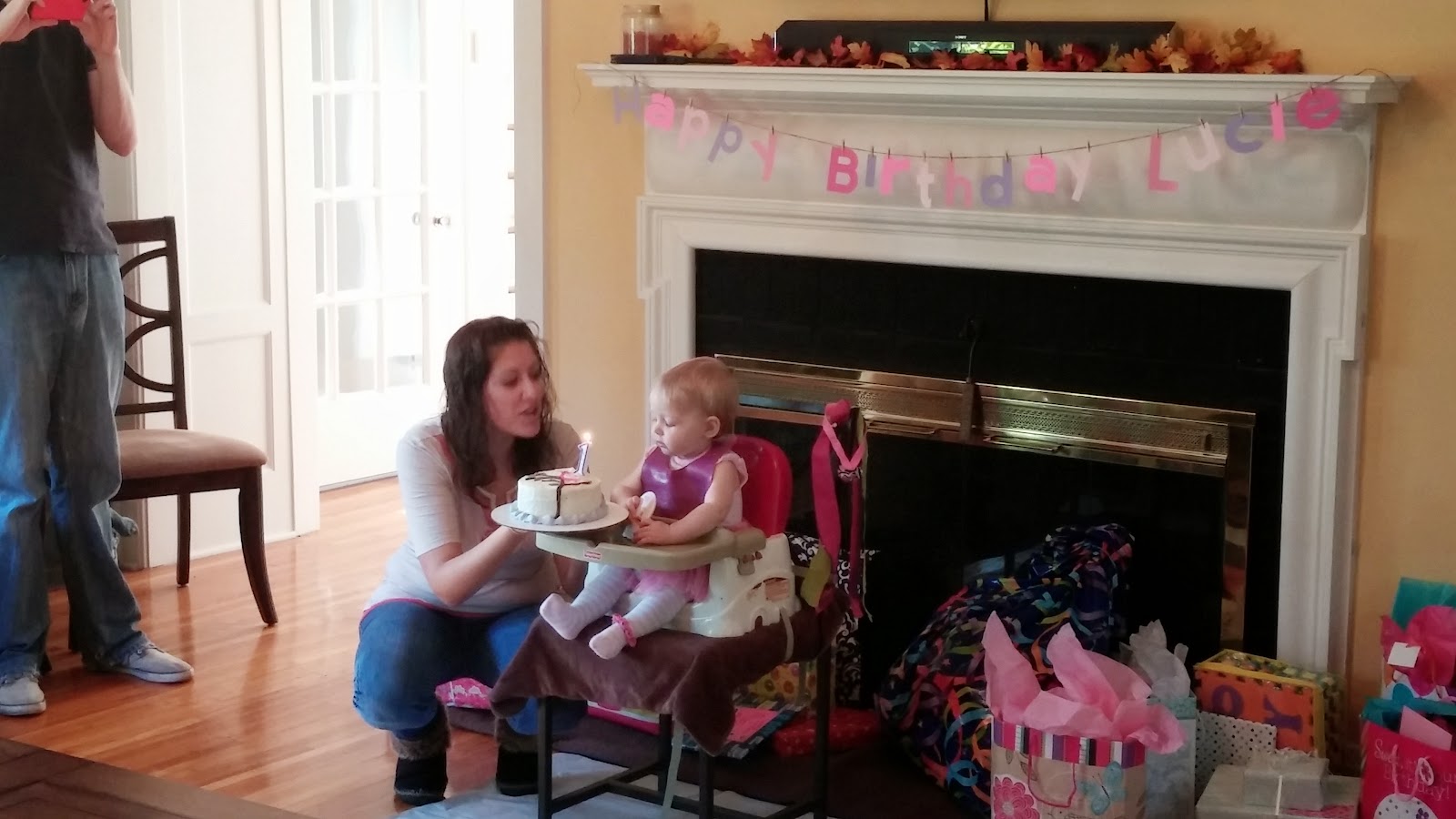 
That night after the party, all our family left and we headed to a Halloween party.  Steve has a co-worker that has a yearly party at Halloween, complete with costumes.  We were the only couple there with a baby (although, another couple is expecting!), but we still had a good time.  We enjoyed showing off our little Bean to everyone - we think she's pretty awesome! 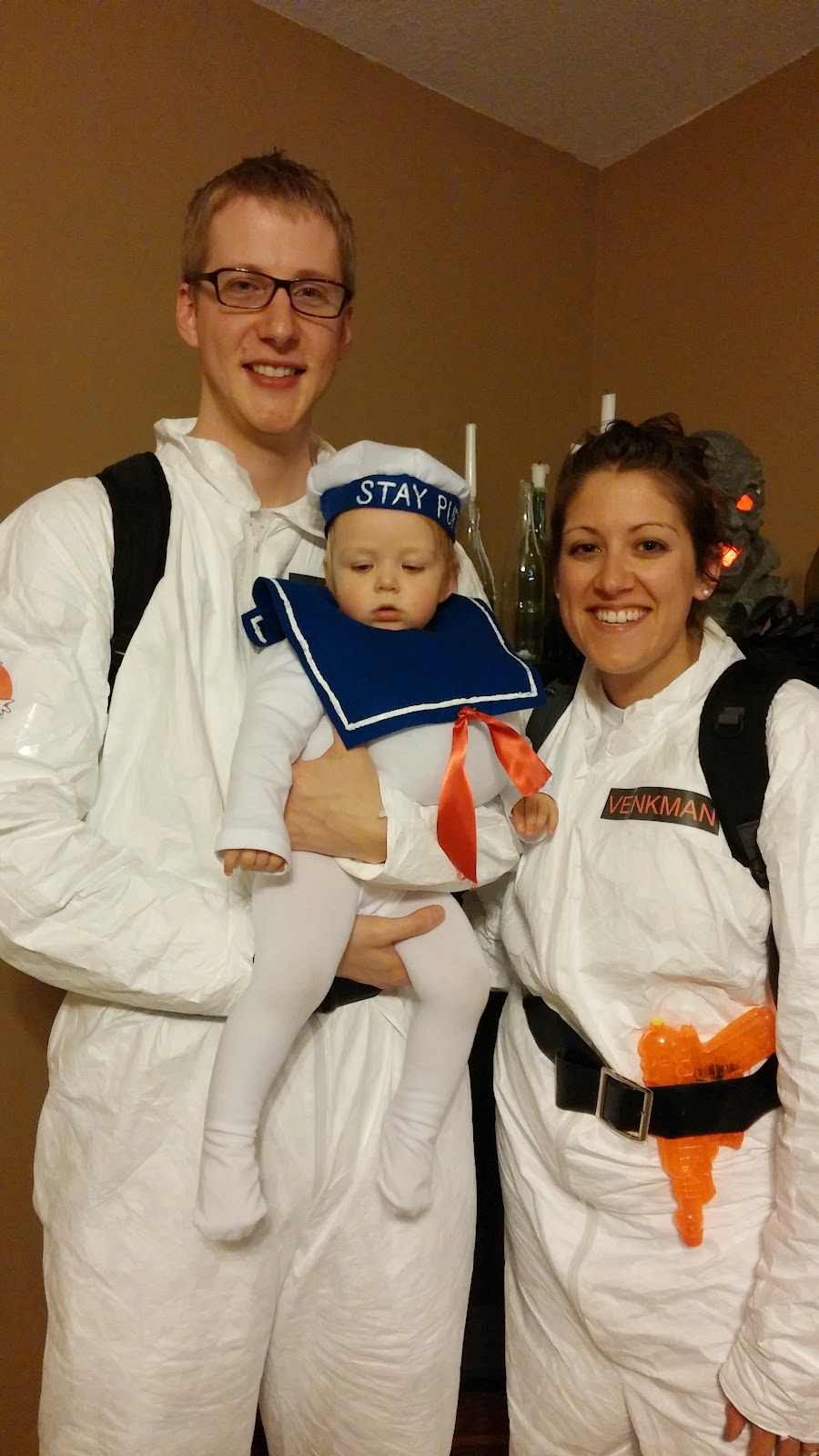 (Who you gonna call?!  GHOSTBUSTERS!  Don't worry, we did not cross any beams and did not roast that cute little Stay Puft Marshmallow.) 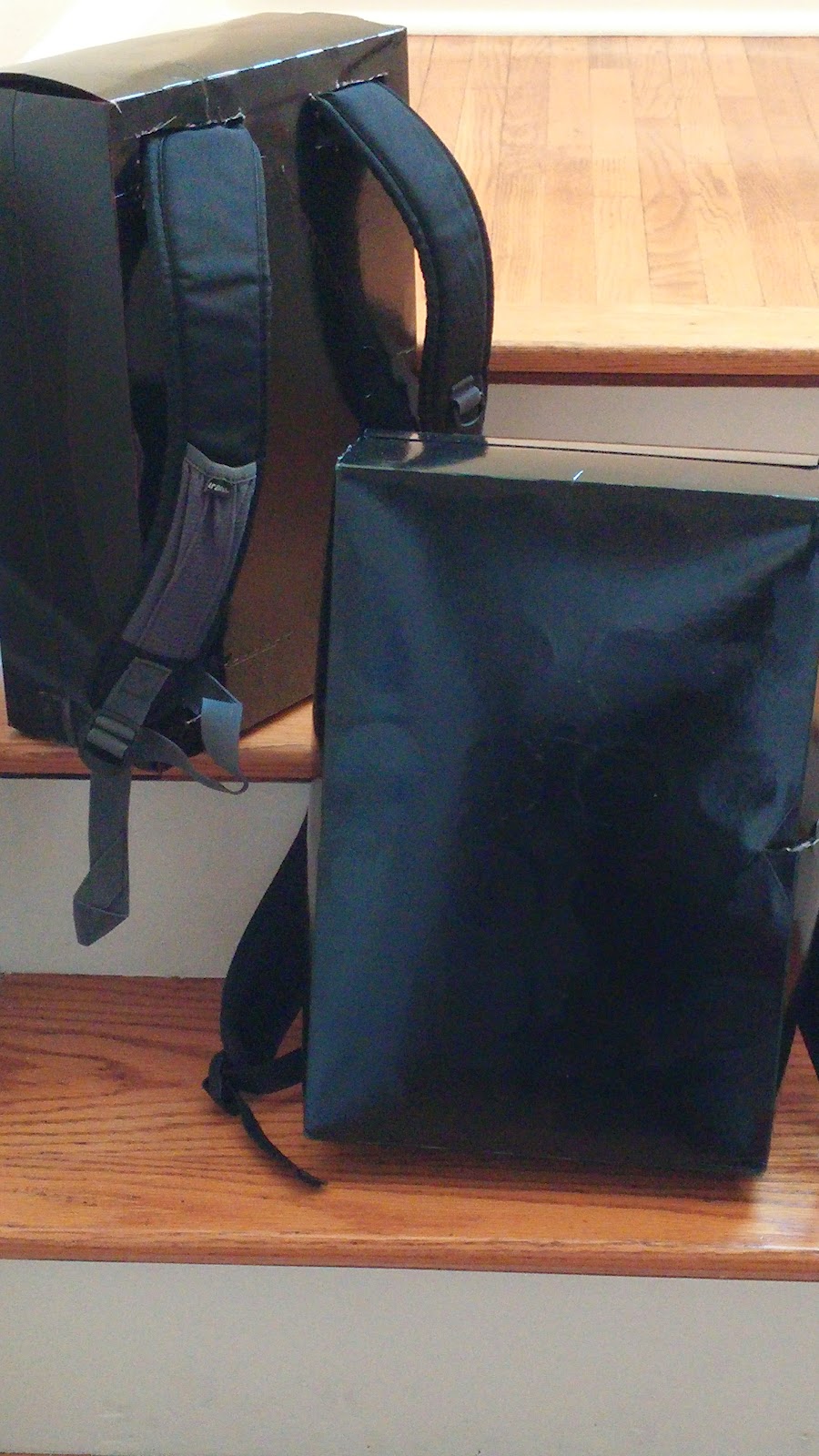 (I made our Ghostbuster backpacks out of coke boxes and a $.99 can of spray paint.  I slipped real back packs inside the boxes, cut holes for the straps to come out & voilà! We purchased protective coveralls to be our ghostbuster suits, printed off some logos, and taped them on.  Bean's costume was just some basic felt from the craft store that I rigged up to be the bib & hat.)


On Monday morning (a week ago), I made an impromptu trip to Indiana for a few days (more info on that in another post, haha!). Bean and I got to quickly visit with friends and family before returning to Lima.  I had hopes of that trip being a way to "recharge my mom batteries".  But unfortunately, I was still fighting my sickness and came home as tired as I left.

We got back just in time to get to church.  I had to be back for my first praise team practice (even though I had half a voice).  Even though I was too sick to audition the week before, the choir director has heard my voice from a solo audition, and put me on team. I was hoping to only be on team once a month, but looks like 2-3 times is more like it.  I don't mind the extra singing, it just takes away a little "family time".  On Wednesday nights, team practice is at 6 & choir is at 6:30.  Steve started helping out in AWANA at 7 a month ago.  We would go to church together on Wednesday nights and he would just wait the 30 minutes until AWANA started.  But on the nights I have team practice, he'd have to wait a whole hour.  So we drive separate.  Also puts a kink in driving together on Sunday mornings, too.  Oh well.

The rest of the week was spent trying to recuperate and ignoring the house.  By Saturday night, the house was so out of control, that I took 2 hours to clean it (after coming home from a ladies' night at 9pm).  Good thing I'd get an extra hour of sleep with daylight savings!  WRONG! Bean woke up at 2:30 screaming (I went to bed at 12:30, so 3 hours with the time jump) and would sleep off and on for 30 minutes.  I could never fully fall back asleep in between her cries.  So at 5:30, I finally called it quits, went downstairs, and put on Frozen (Bean's new favorite, thanks Mom!).  Bean went back down to sleep just a little before 8.  In time for me to get ready and head to church.  I had hopes of an afternoon nap, but instead helped husband rake leaves. 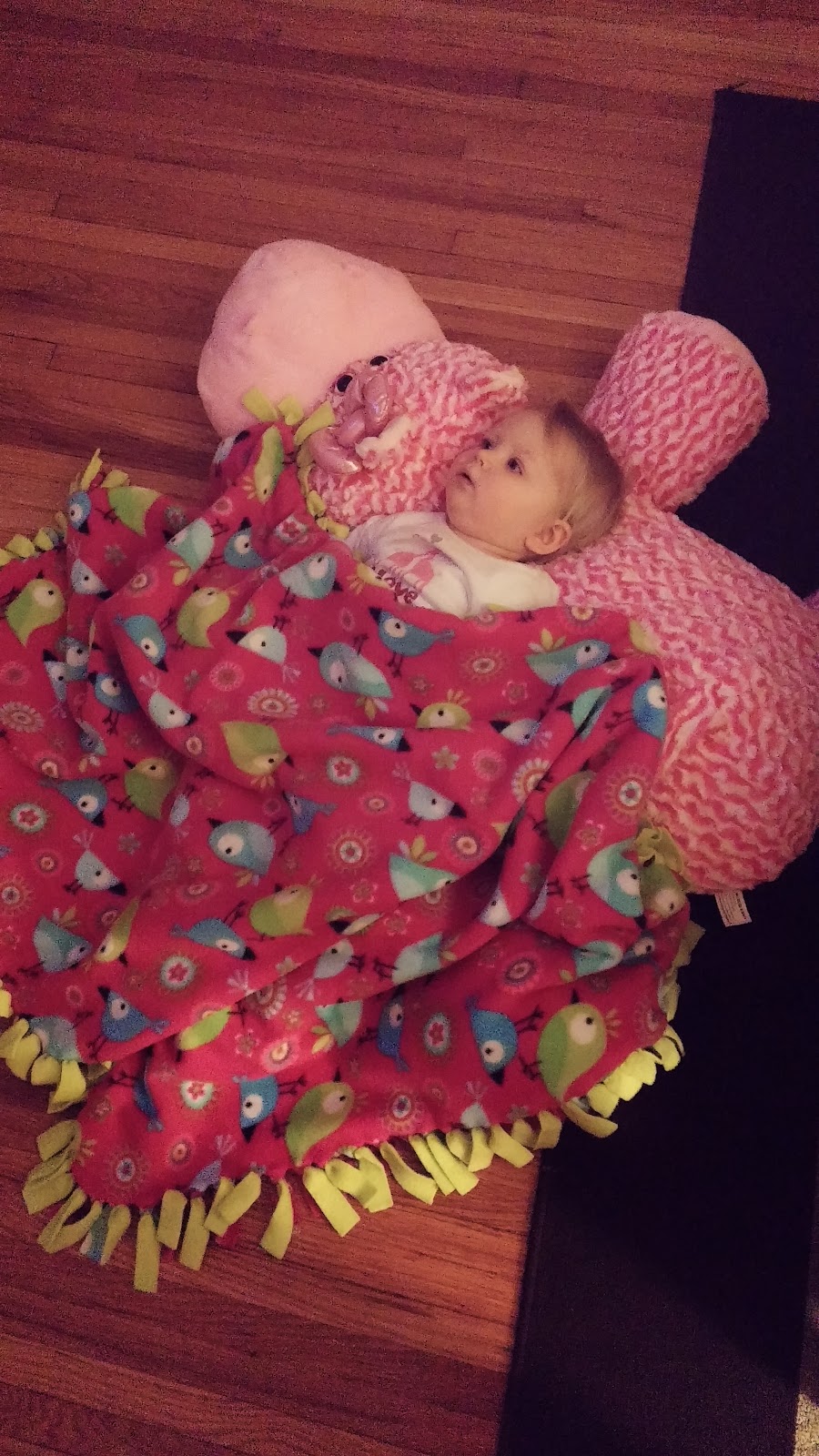 (Laying on the floor watching Frozen at 6am.  I ended up feeling bad leaving her on the floor, so I picked her up and she snuggled with me on the couch. )


Bean had a better night last night, but still cried out a couple times and was needy.  I found myself rocking her at 2am and falling asleep.  I tried to put her in the crib, but she'd lose it the minute I'd lay her down.  I got the brilliant idea to sit on the floor next to her, with my hand on her, in hopes of her falling asleep.  It ended up with me laying on the floor and her staring at me (quietly) between the rungs of her crib.  I called it quits and went back to bed (where I admit I had a breakdown.  I miss uninterrupted sleep.) Bean quit crying, I quit crying, and we all fell back asleep until morning.

Which brings us to today -- I woke up feeling pretty good (just a random cough once in awhile) and got straight to work.  I started tackling laundry, spent an hour alone in our bedroom/bathroom (just doing normal straightening up and cleaning.  It was that out of control!), went grocery shopping, did some sewing, went for a RUN (first run in 2 weeks.  Yikes!), made dinner, folded laundry, got Bean to sleep before 8 AND NOW writing a blog post!  It feels good to feel better and be back in the swing of things. 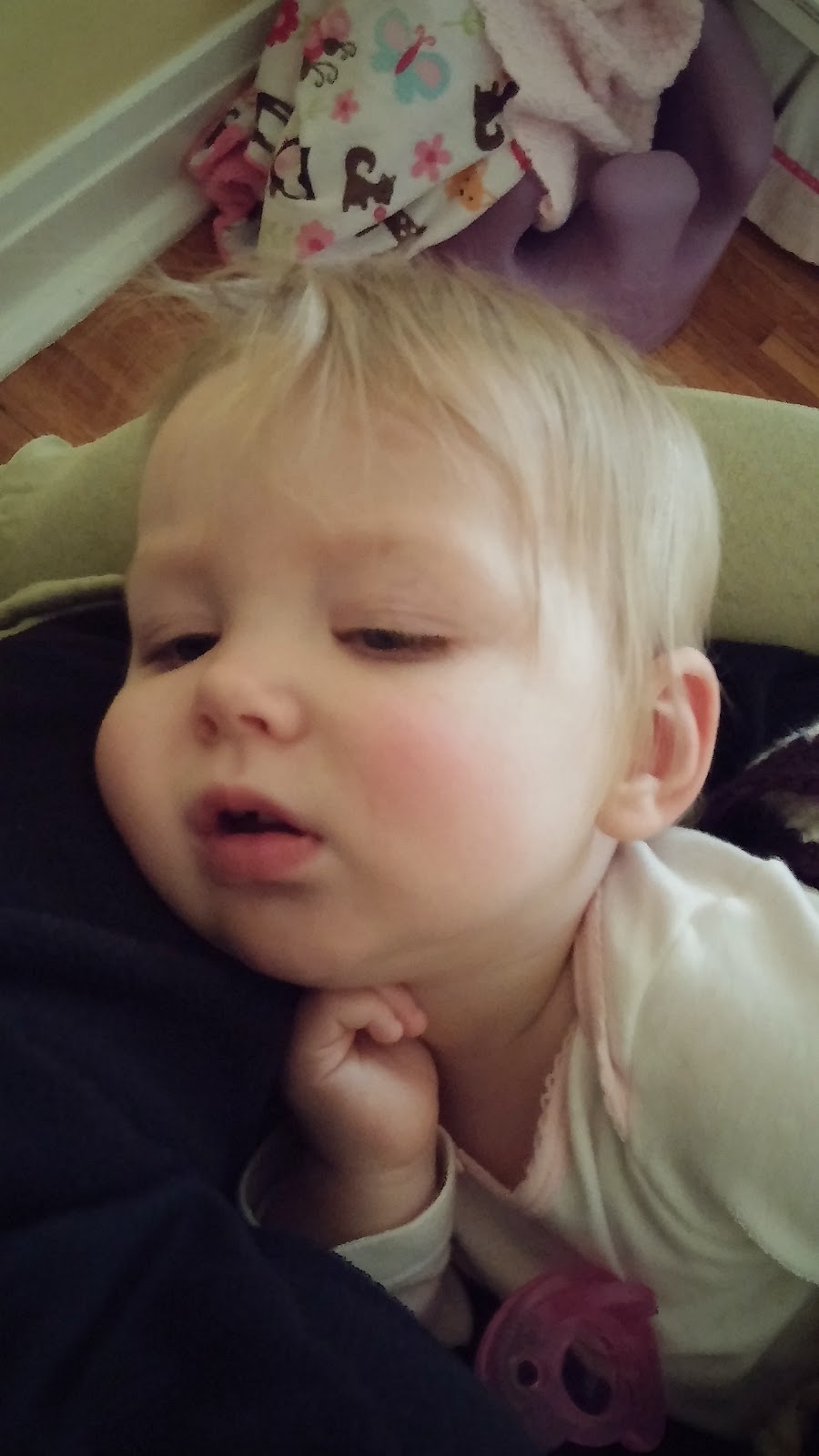 (Bean didn't take a good afternoon nap.  I'm pretty sure she's got some teeth coming in which is why she's had such bad nights.  I should've stayed on top of the Tylenol today, but didn't.  So we snuggled in attempts of her falling back asleep, but that didn't happen.  She did sort of zone out while I ran right after this though.  so had she taken a good nap, I wouldn't have ran.) (And just because!  How can you get mad at that cute face?? Okay, at 2am it is quite easy. She isn't walking yet, but is much more confident in using her rolling toys.  Today she pushed her stroller into her zebra and continued to push it until they ran into the chair.  What a crazy girl!)
Posted by Unknown at 9:07 PM