So, I now realize how far behind I am on blogging.  Yikes!  About a month ago, I hosted a baby shower for my friend Sara.  Her little one is due in just a few weeks, and I can't wait to meet him!  Two other friends helped me shower Sara & Poppyseed (as he's currently called) with a joyous celebration of her little man! 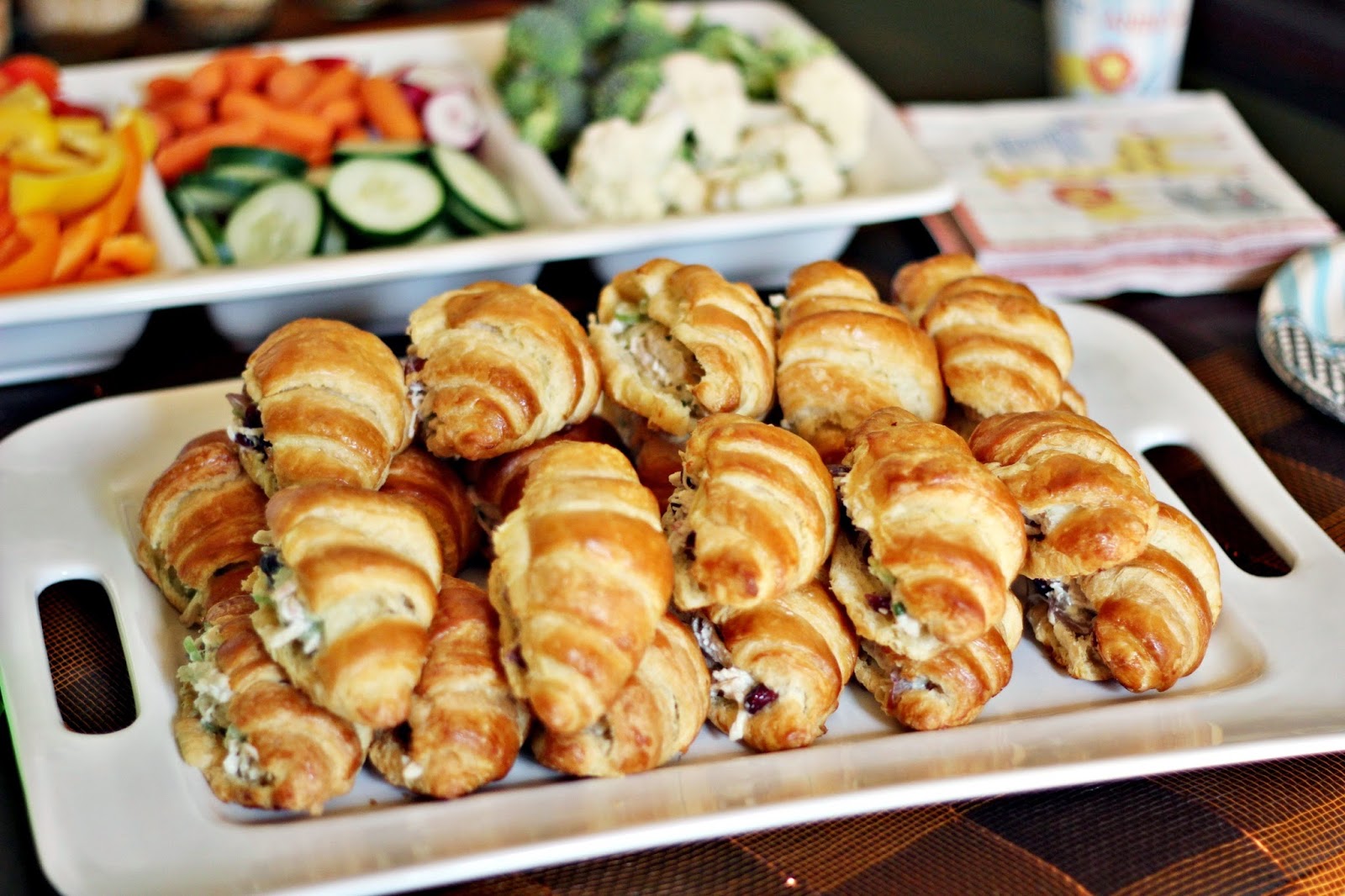 (My friend Candace headed up the food department.  She came up with the menu and delegated responsibilities to others.  She made these awesome croissant sandwiches, her famous cheeseball, and also little cucumber sandwiches.  yum-o!) 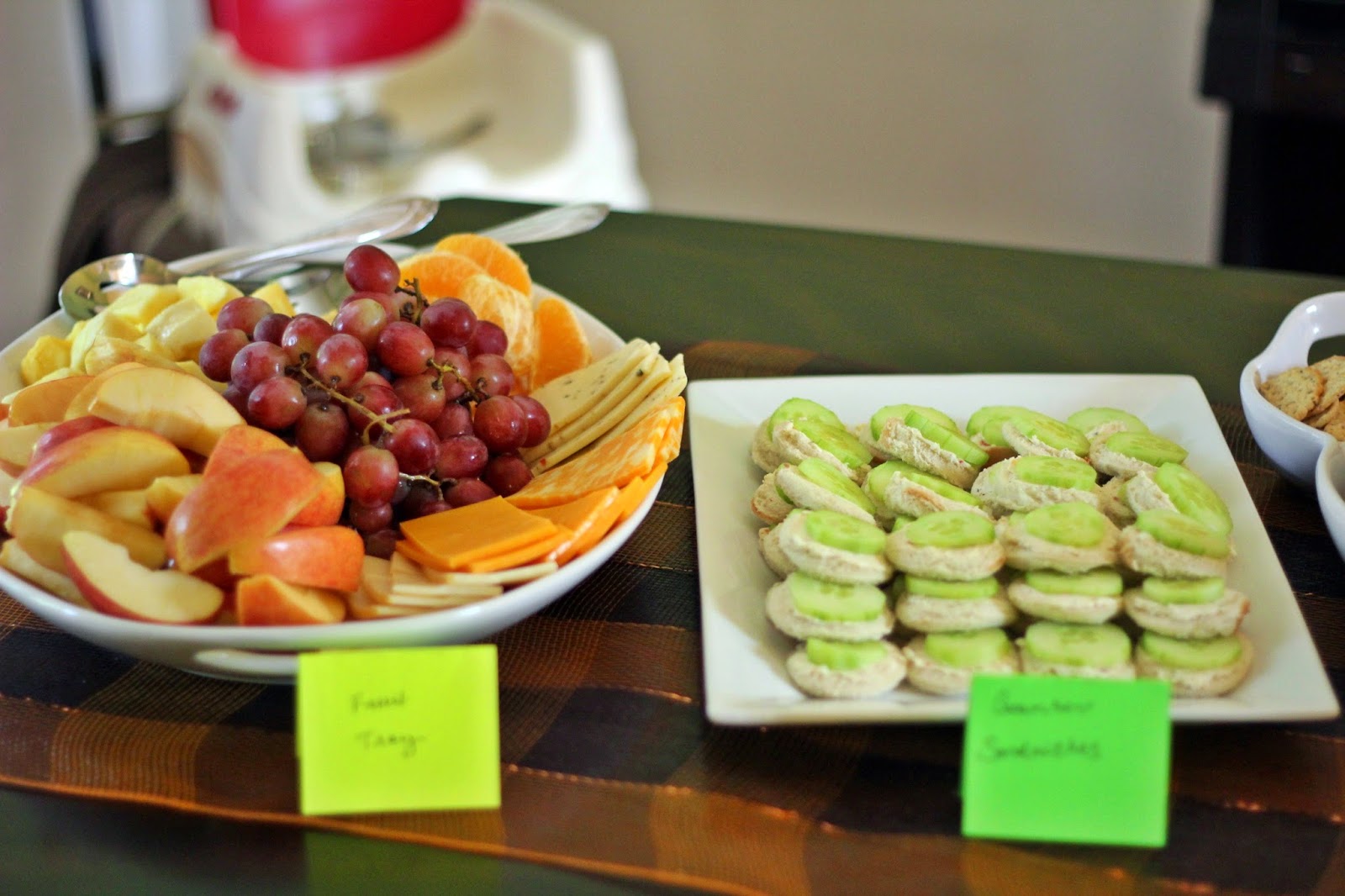 (More of the delicious food!) 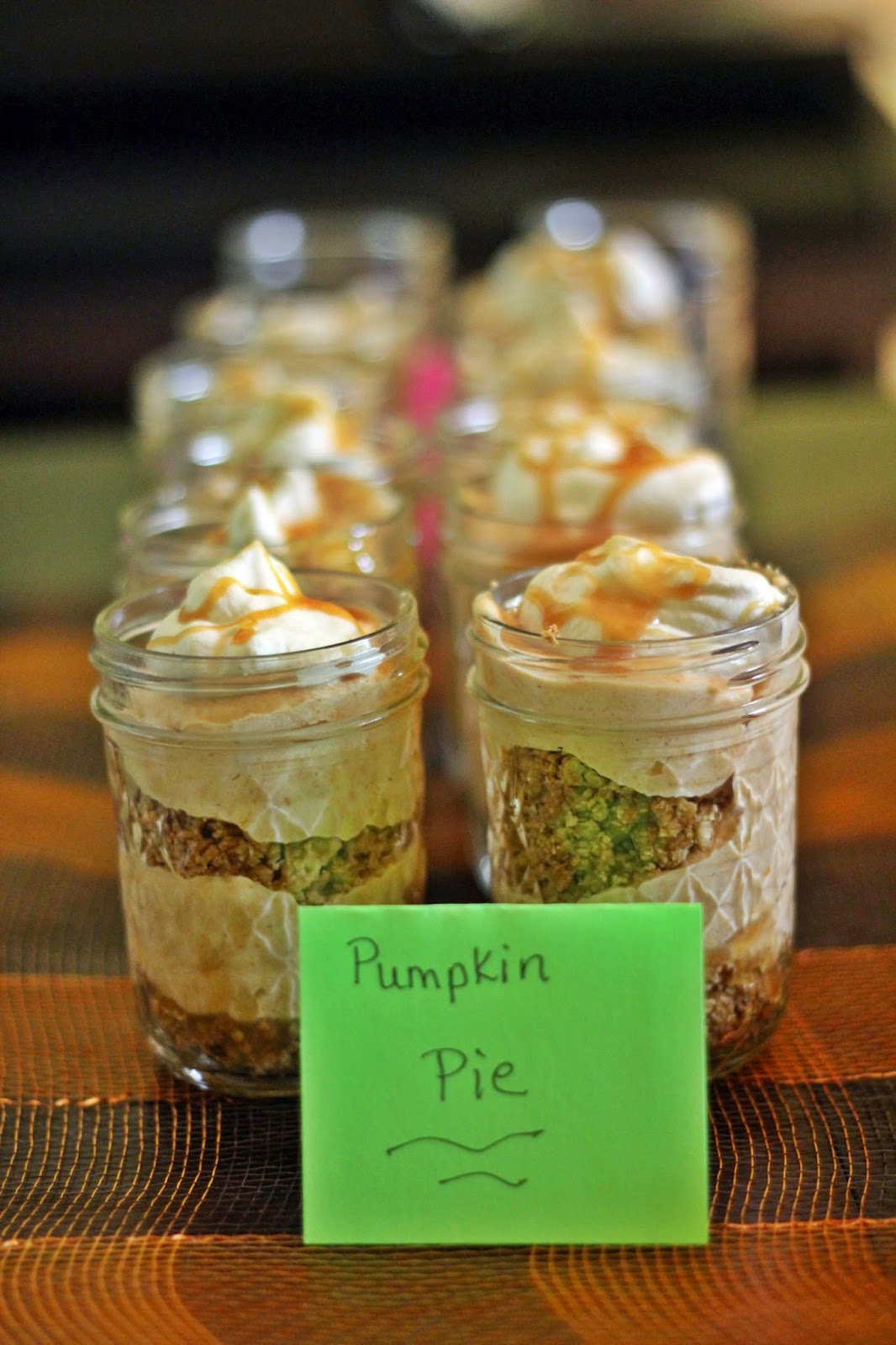 (One of my "few" responsibilities was to make the desserts.  I came up with the idea to make mason jar desserts.  I made a pumpkin pie mousse dessert, turtle brownies, and apple crisp.  I had all the stuff pretty much set up before my friends came to help decorate.  However, with an hour until the party, as I started to layer the jars, i discovered I didn't have pumpkin!  Eeks, so luckily, Steve was out in town and was able to get some for me.  A week later, I discovered i had 3 cans in my cabinet.  Geesh.) 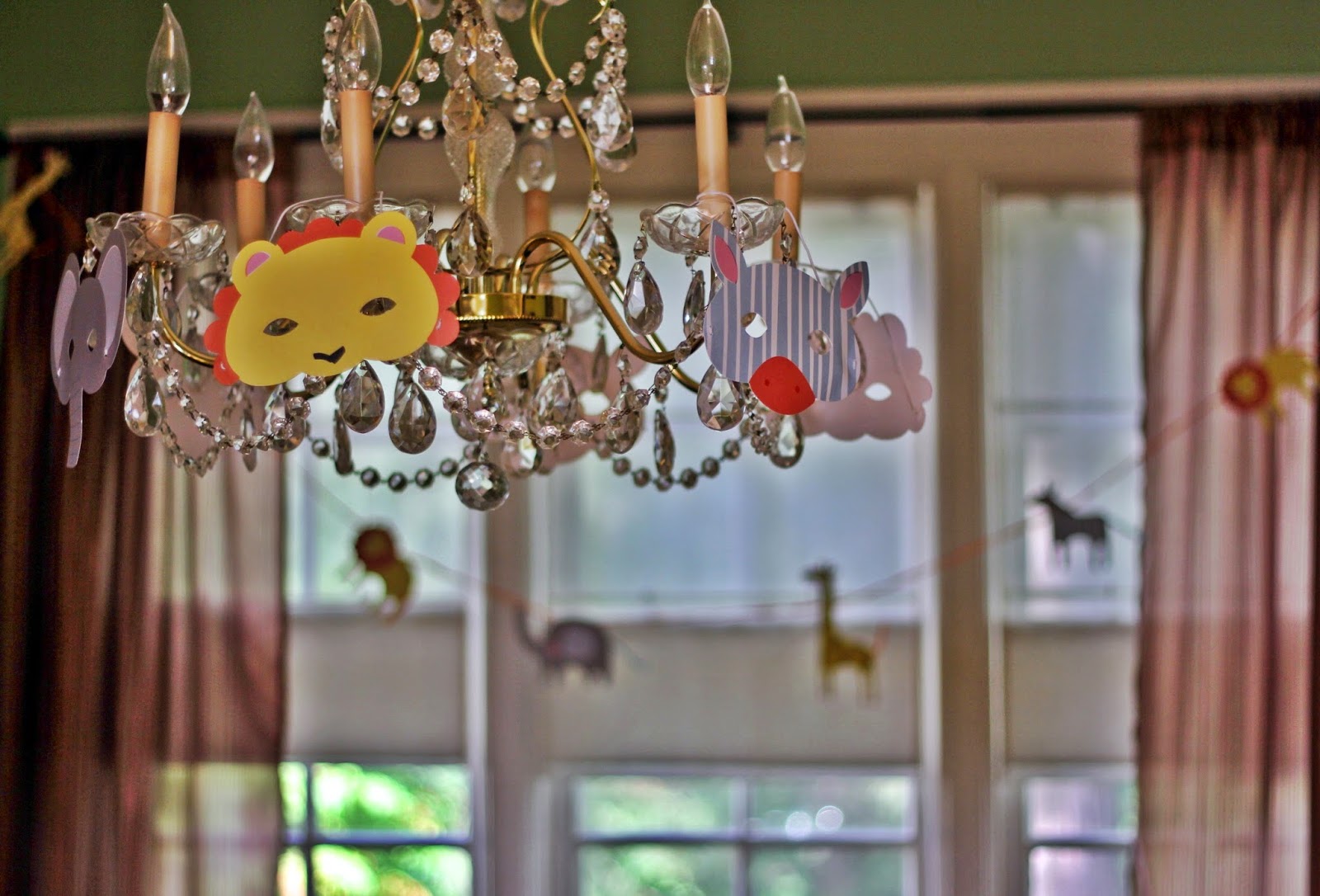 (Sara's theme was "Animal Parade".  I found all the decor, invitations, plates/cups/napkins, and thank yous for a ridiculously good price months in advance.  Candace and our friend Amber helped put all the decor up while I was in crazy dessert land.) 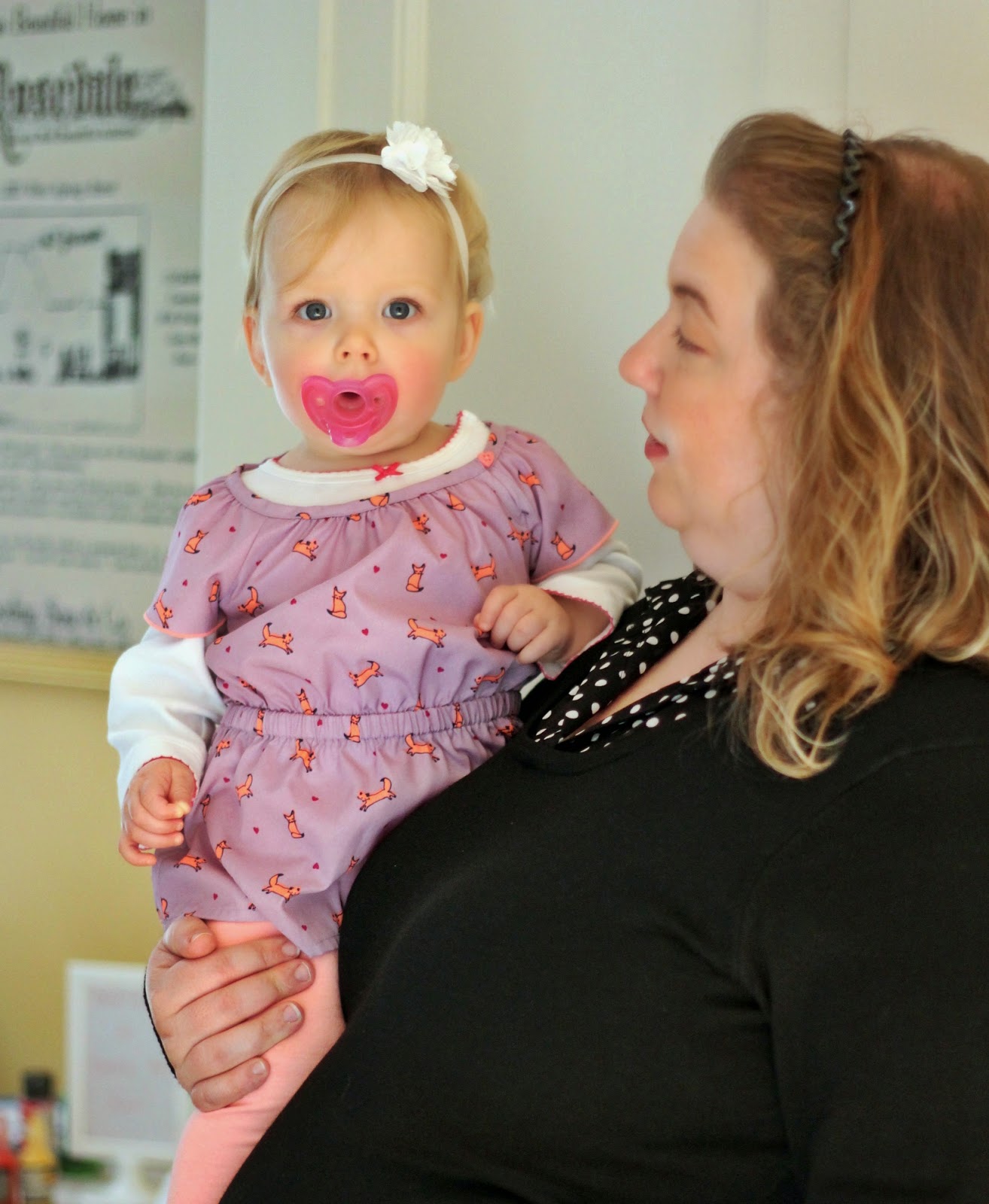 (Bean took a nap while we were getting the party all ready.  Right as it was about to start, she woke up.  Okay, maybe she was already awake, but by the time I finally checked in on her, she was up.  She of course was the life of the party.) 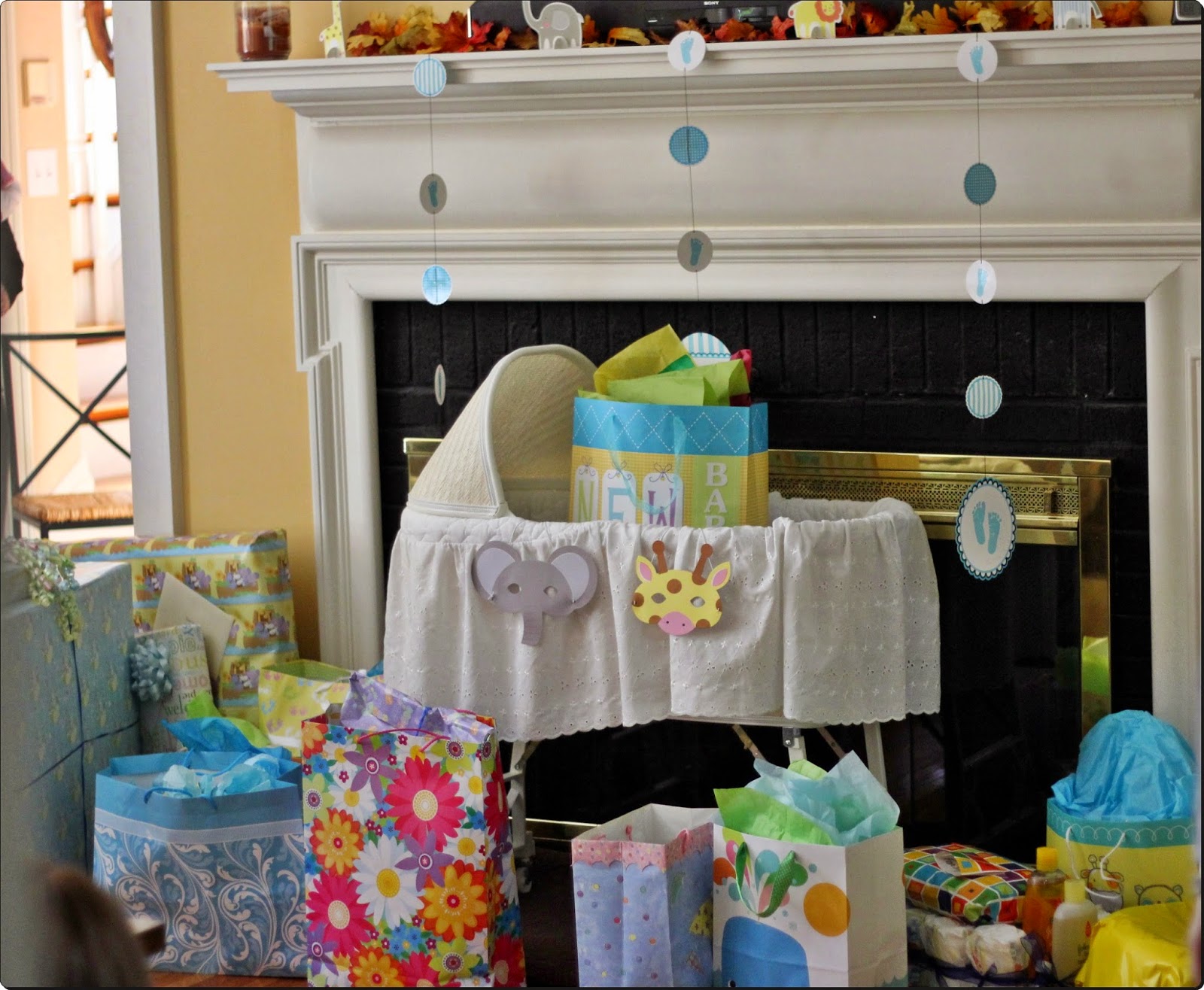 (We had a great turnout, meaning Sara got a ton of gifts! I think there were almost 20 ladies/girls who came for the party.  I let Sara take the bassinet home with her to use the first few weeks Poppyseed is home.) 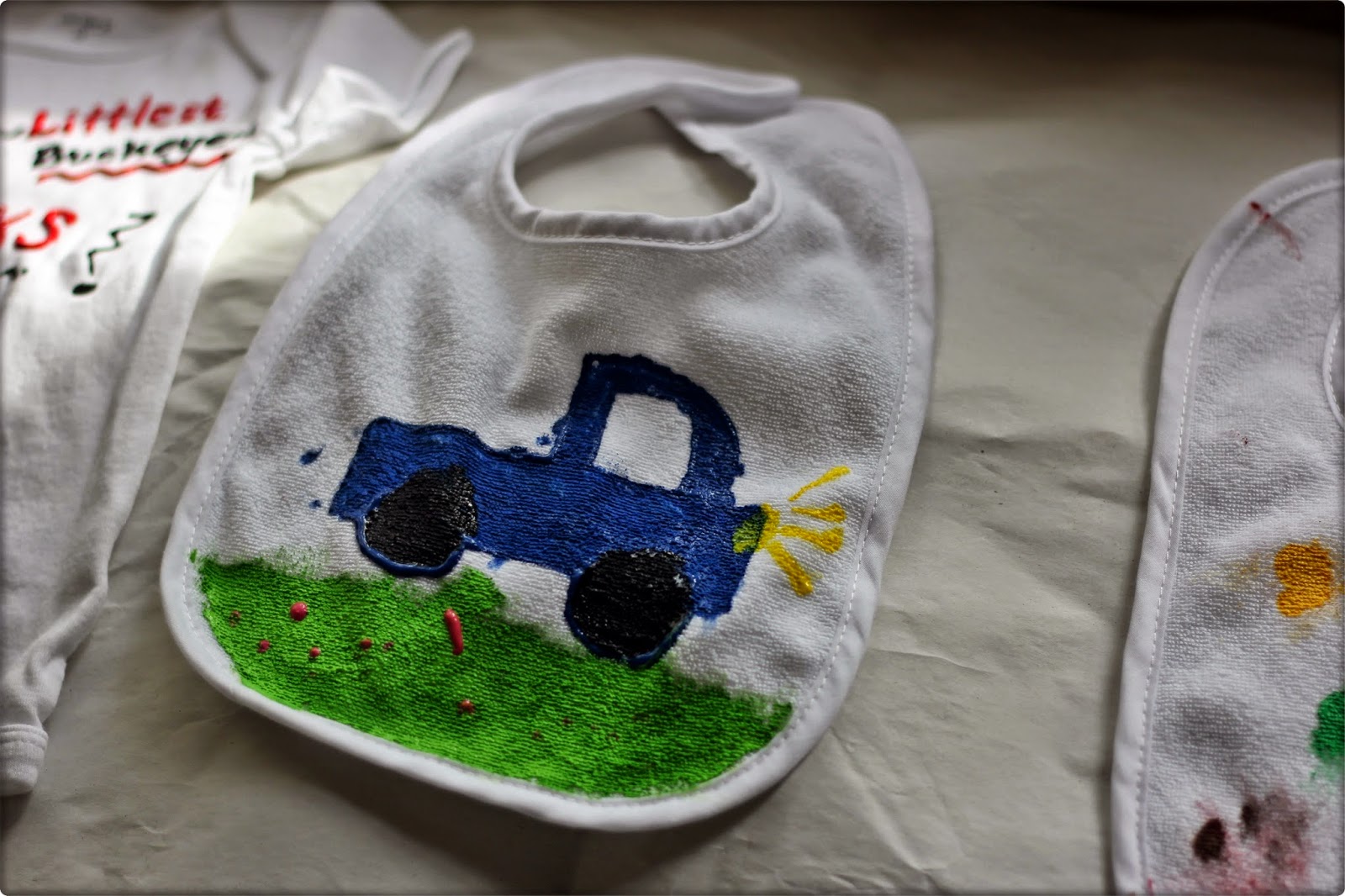 (Amber and I supplied some blank bibs and onesies to be decorated.  Poppyseed is going to look so spiffy in all his uniquely designed clothing!) 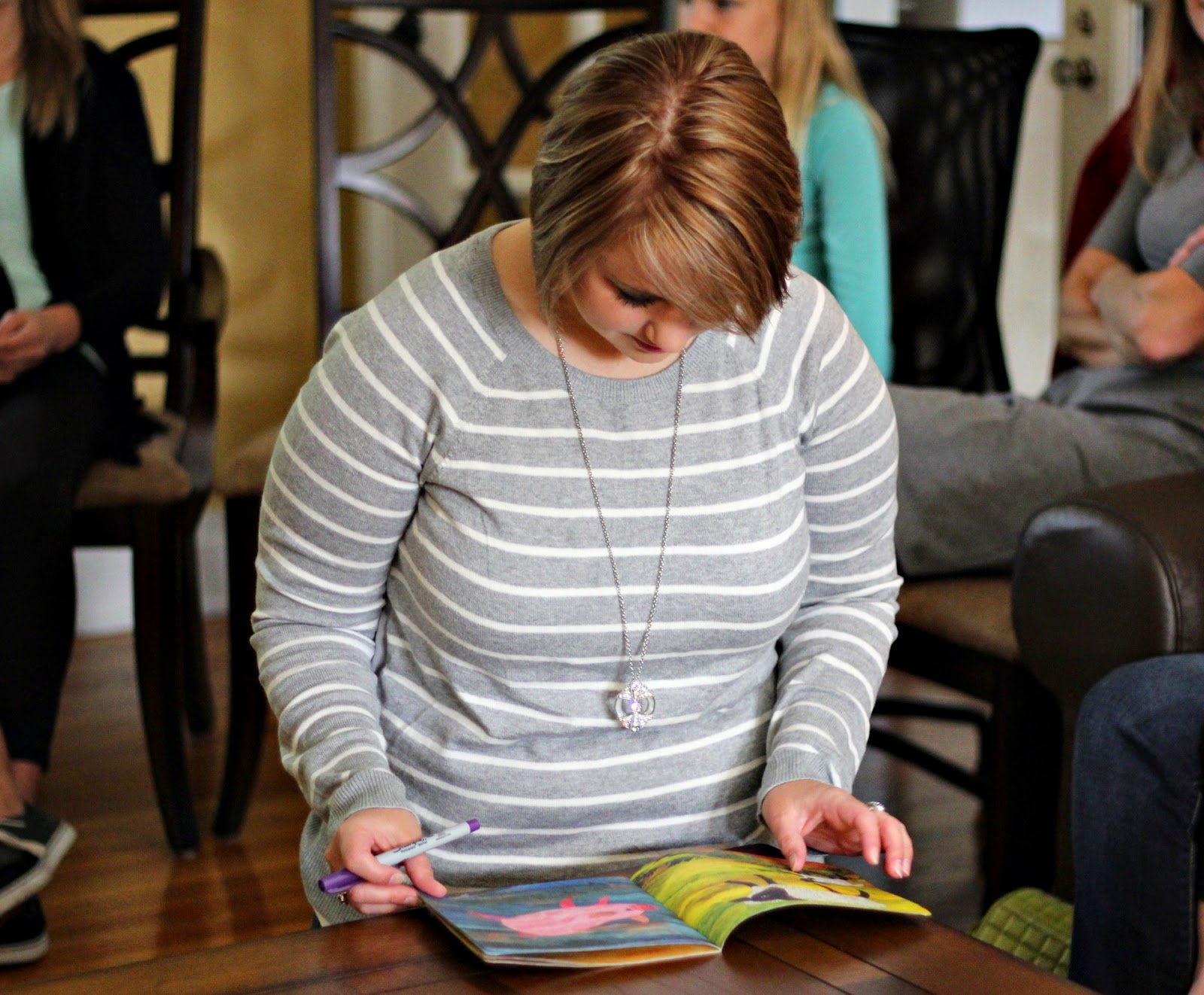 (We didn't do any games and kept it low
key.  Other than the decorating station, the only other thing people had to do was sign a little book for Sara.  They could jot down well wishes, advice, or just let her know they were at her party.) 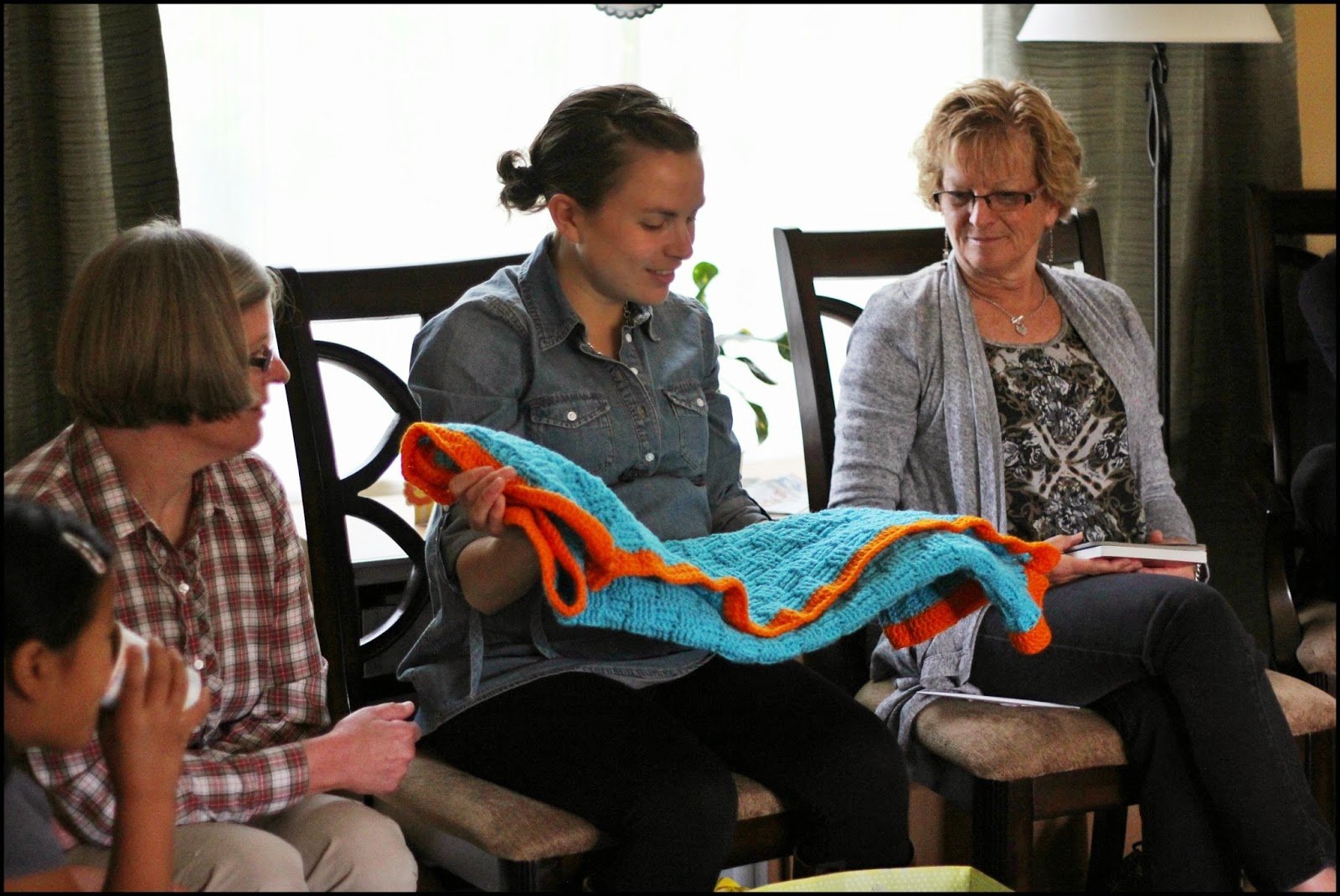 (Since Sara found out she was having a boy back in July, I got to work making her a blanket.  I have a friend who makes these amazing basket weave blankets- I've made them before, but my friend's are famously known as "Aunt Courtney Blankets".  So I chose to make a blanket for Poppyseed.  Although, I don't feel like it's the same feel.  Maybe it just needs loved on?  Bean sleeps with her blanket every nap & every night.  It's been washed a lot and well loved, ha.) 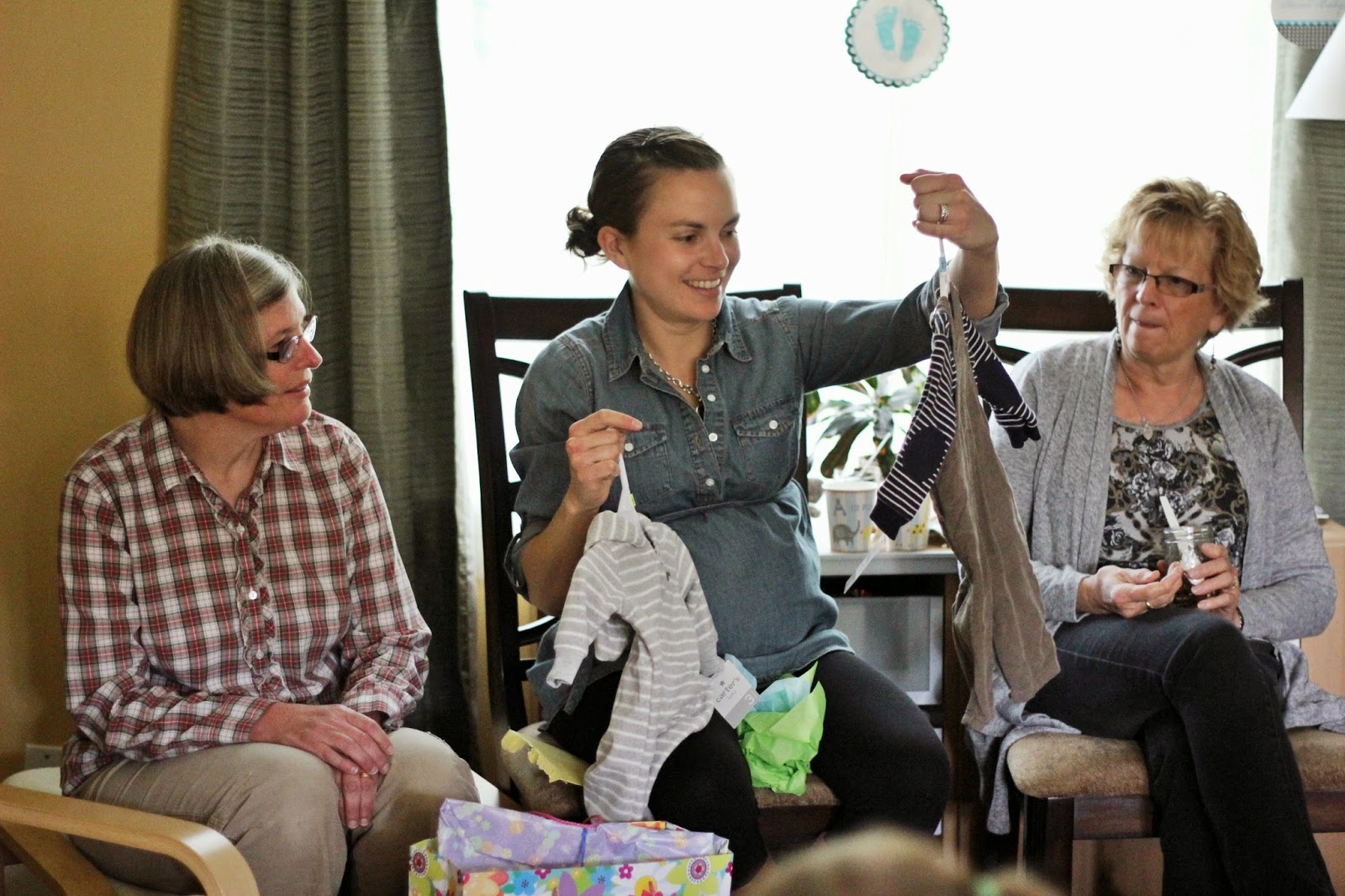 (Poppyseed is going to be the most fashionable little guy I know.  He got a ton of clothes at the party!) 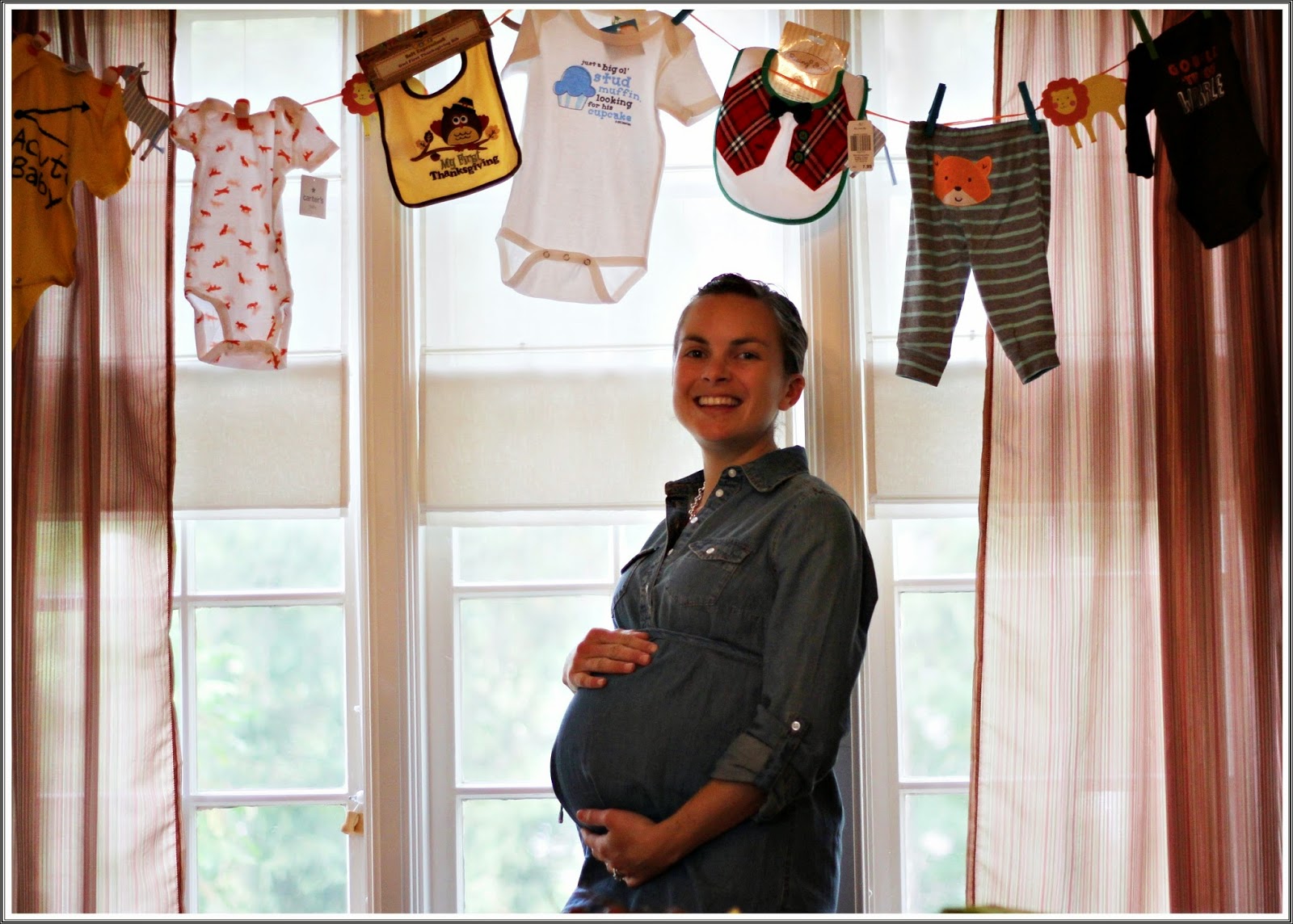 (Sara posing with some of Poppyseed's new clothes!  Can't wait to meet him & finally learn his name!)
Posted by Unknown at 4:07 PM