The weekend in between Bean's real birthday and her birthday party, we headed to Mansfield, OH for a full family fall day.  Mansfield was a good halfway point to meet up with some college friends who have recently moved to north east Ohio.

We met them at a pizza/sandwich stop (that got great reviews on TripAdvisor), picked up some lunch, then caravanned to Malabar State Farm Park.  We had a delicious and very cold picnic lunch at the picnic area.  We then got back in the cars and drove up to the visitors center.  We knew there were tours of the farm and of the house every other hour. We had just missed the house tour and looked around the little center a little bit before signing up to do the farm tour.  When Steve went to sign us up, we discovered that the next tour was full!  Ooops, lesson learned.  We should have gone straight to sign up first!

We signed up for the next two tours, got back in the cars, and drove to a trail head to hike the grounds a little bit.  We were given directions to a supposed family friendly hike, but missed the turn.  We ended up going to the trail head with the cabin on the grounds.  We walked around the cabin and then began the rocky hike.  We were pushing the two babies in strollers and one of us was in boots with heels (she shall remain nameless, hahaha).  We got about a third of the way when we found a cave.  Steve and Mitch decided to go check it out while Alice and I chilled with the kiddos.  When the guys got done exploring, we deemed it time to head back to the visitor center for the house tour.  We got there just a little before 2, but ended up having to wait almost 20 minutes out in the cold.  The tractor had previously broken down on the farm tour and the guy driving the tractor is also the house guide.  While we waited, we got to watch a bridal party taking pictures (they looked colder than us!). 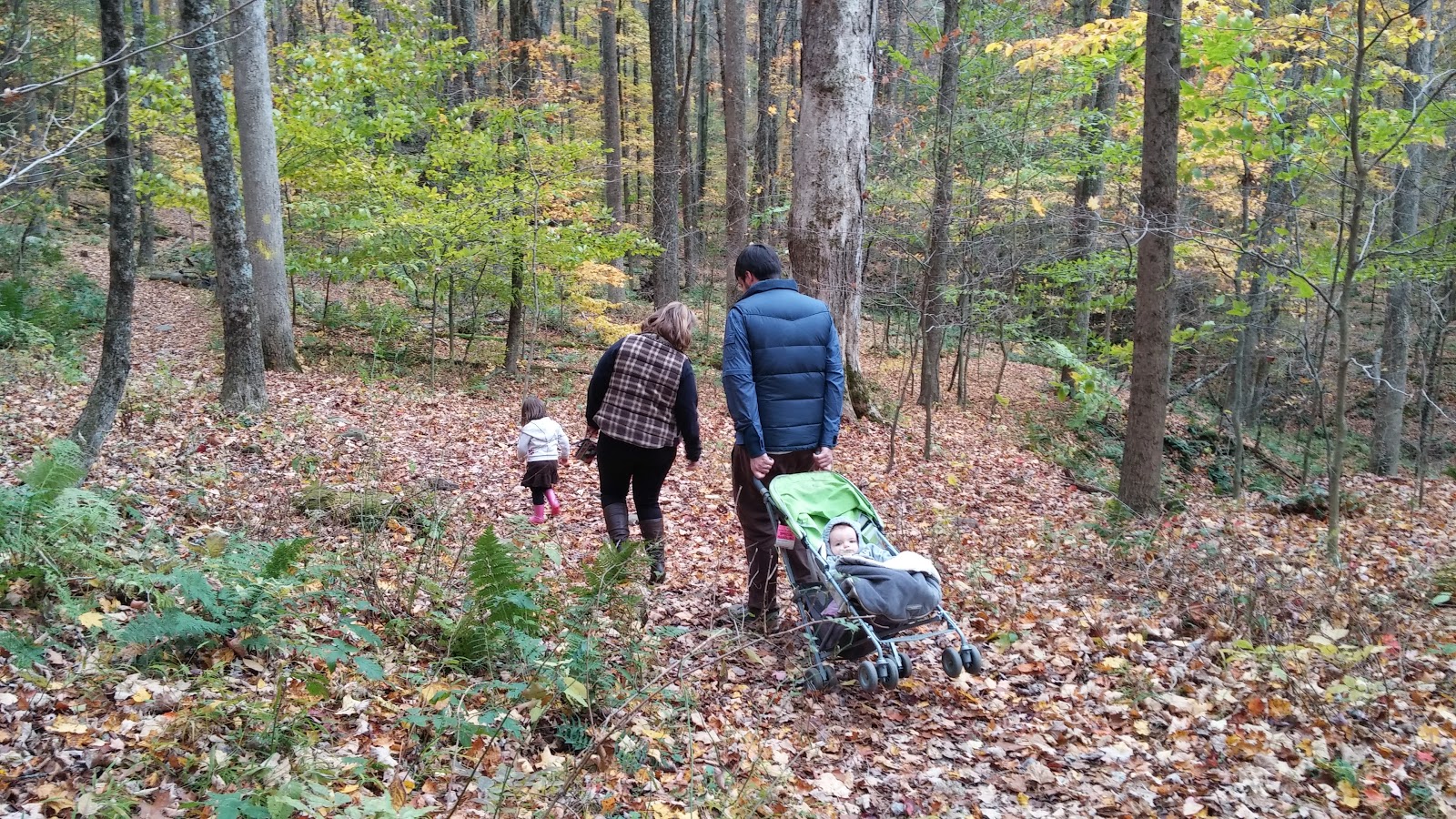 (How Mitch and Alice hike: in heeled boots and dragging a stroller) 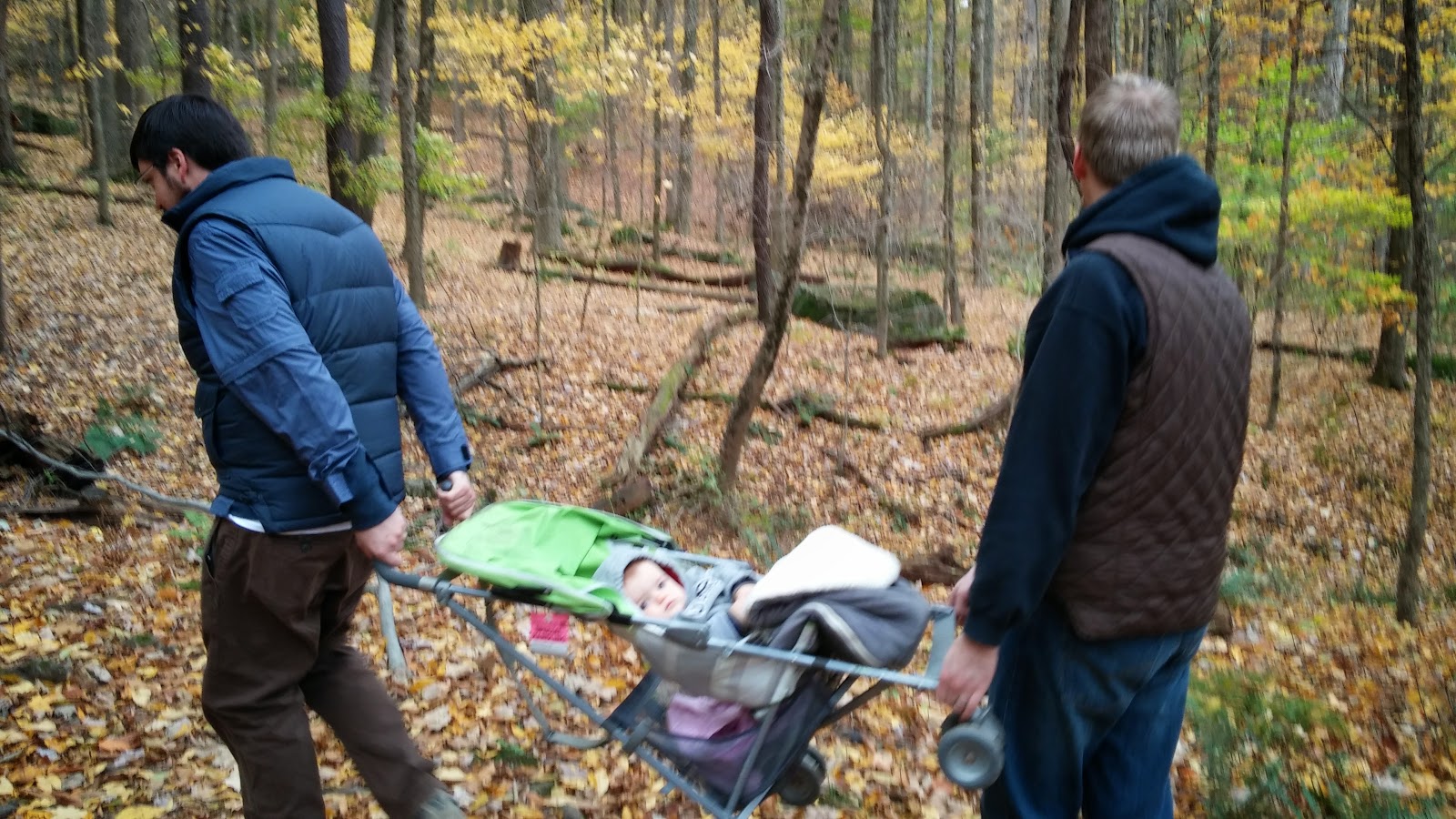 (Steve came to the aid of carrying Wilson) 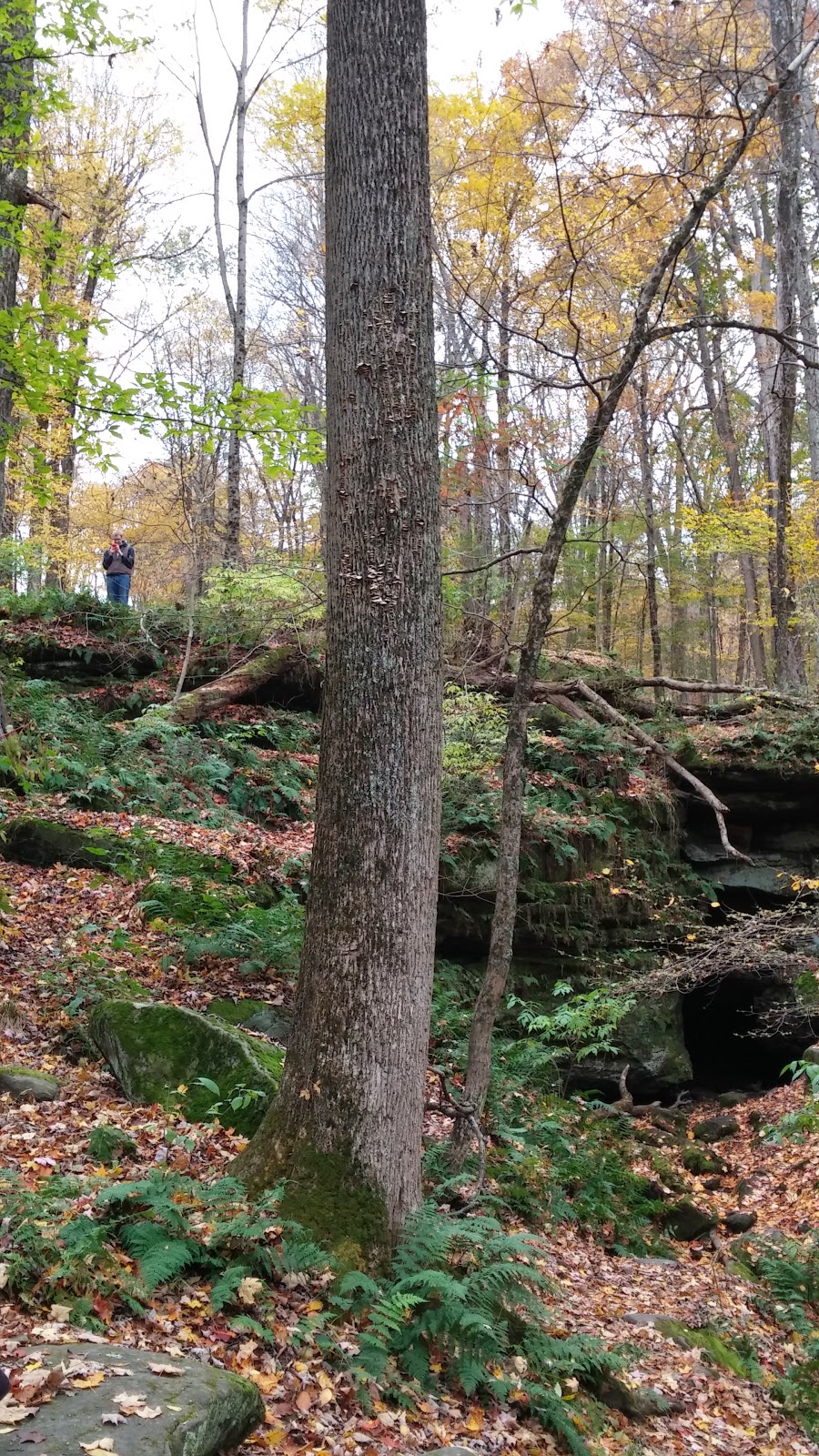 (Steve and Mitch went to explore the cave along the trail. They entered the cave on the lower right, walked all the way through it and came out on the top - you can see Steve on the top left of the hill.) 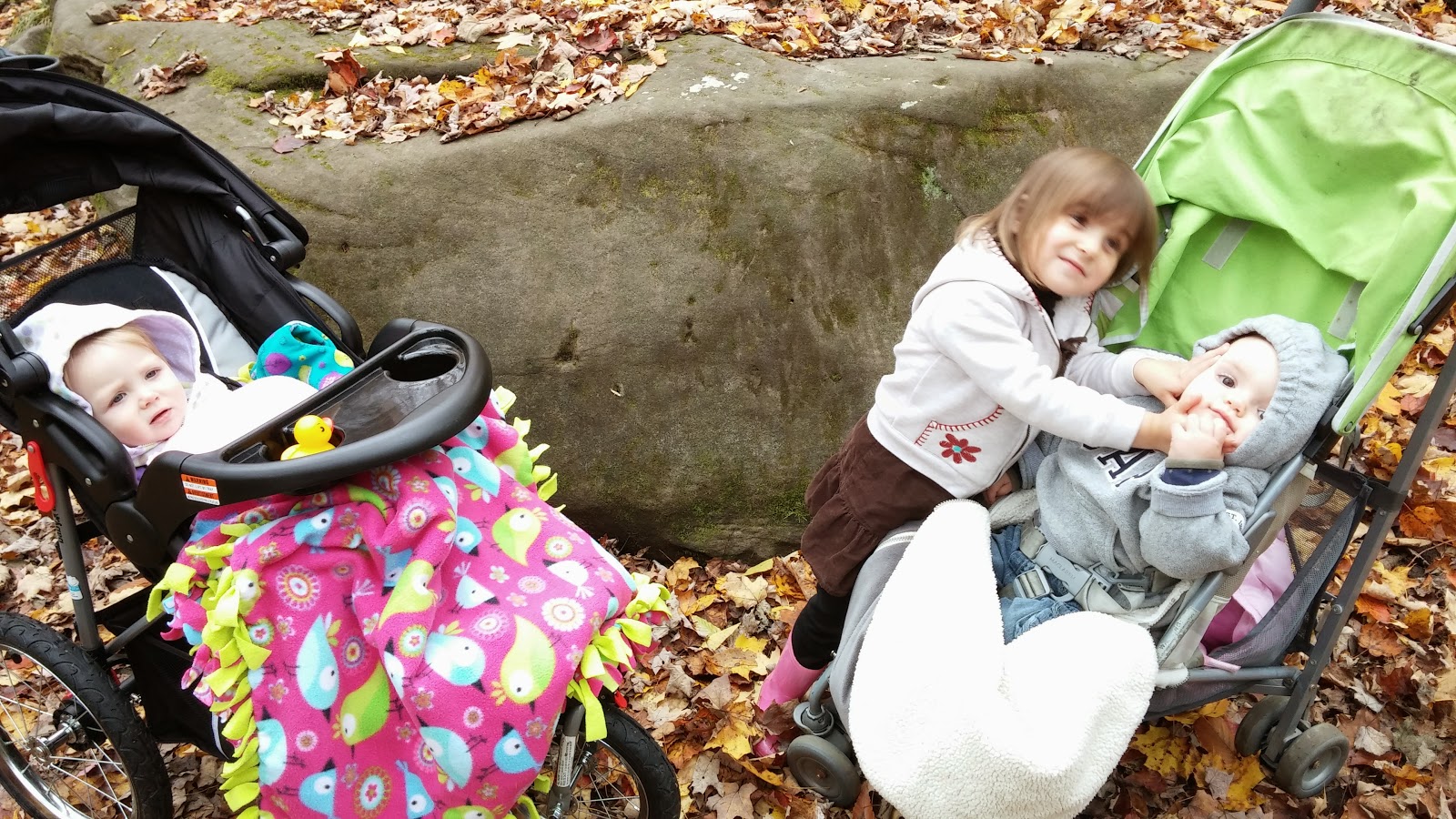 (While the daddies were off exploring, the mom's got to watch the kids being silly.  Libby especially loved jumping off the rock.)


Bean had fallen asleep in her carrier while we waited for the tour, but of course woke up once we got into the warmth of the house.  I made her stay in the carrier because I didn't want to deal with her wanting to touch everything.  The tour guide was very good about letting us with the kids go into the next room and let them have some space before the rest of the group came in.  Really made it easier to keep the kids separate and not interrupt his spiel! 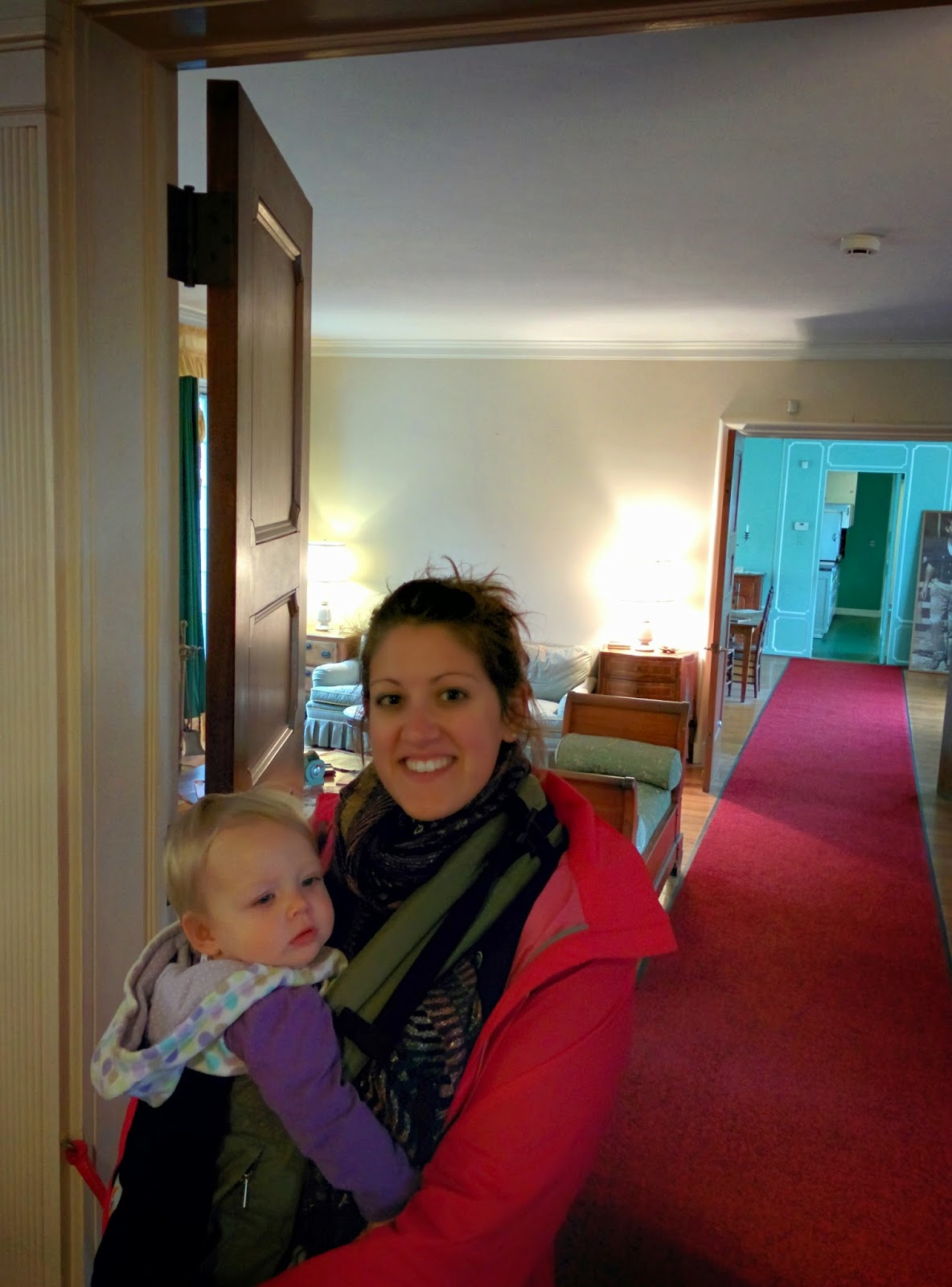 (Bean just chilling in the Ergo carrier.  I had my jacket over both of us when we were outside waiting, and a lady thought I was just holding her that whole time.  My arms would have been dead!  I love the support the carrier gives! But I must admit, I was ready for a baby break by the end of the tour & wagon ride.)


After the house tour, we headed over to the tractor for the farm tour.  Alice, the kids and I, camped out on the floor of the trailer at the back.  It got a little bumpy, but was nice to let the kids sort of roam around in our little space. The guys sat on the bench on the outside of the tractor and held on tightly! After we toured the farm, we warmed back up in the visitor center, then headed back into town in search of coffee.  That ended up being a bust so we decided to just head on to Pumpkin Glow at Kingwood Center. 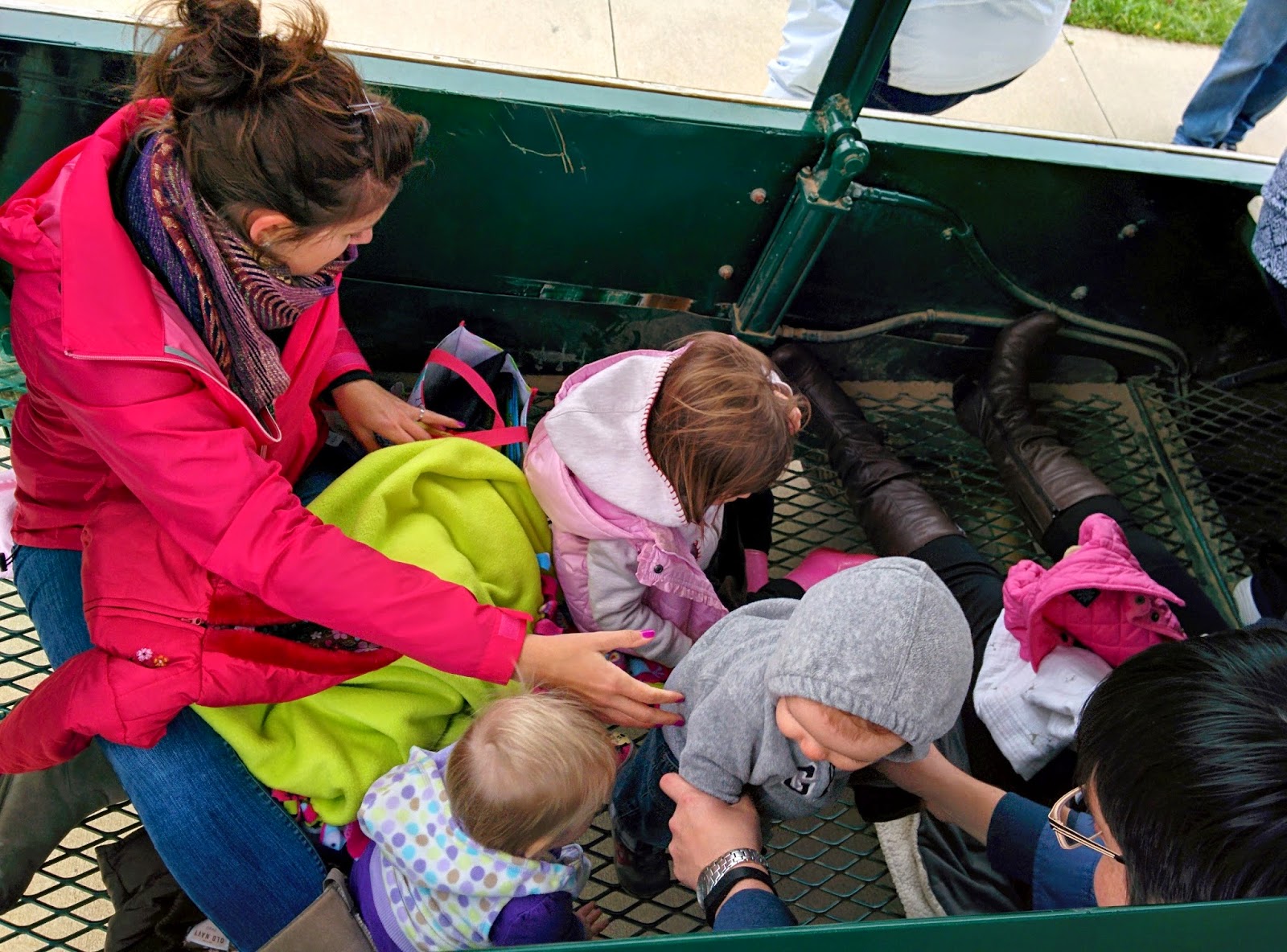 (The wagon ride was a little like herding cattle at times.  Alice is sitting on the right - you can see her feet) and I sat to the left (back of the trailer behind me).  We let the three kids kind of roam in that space - we had some jackets and blankets for them to sit on.  Steve and Mitch were on the outer bench - Mitch is leaning over the side and helping stabilize Wilson.) 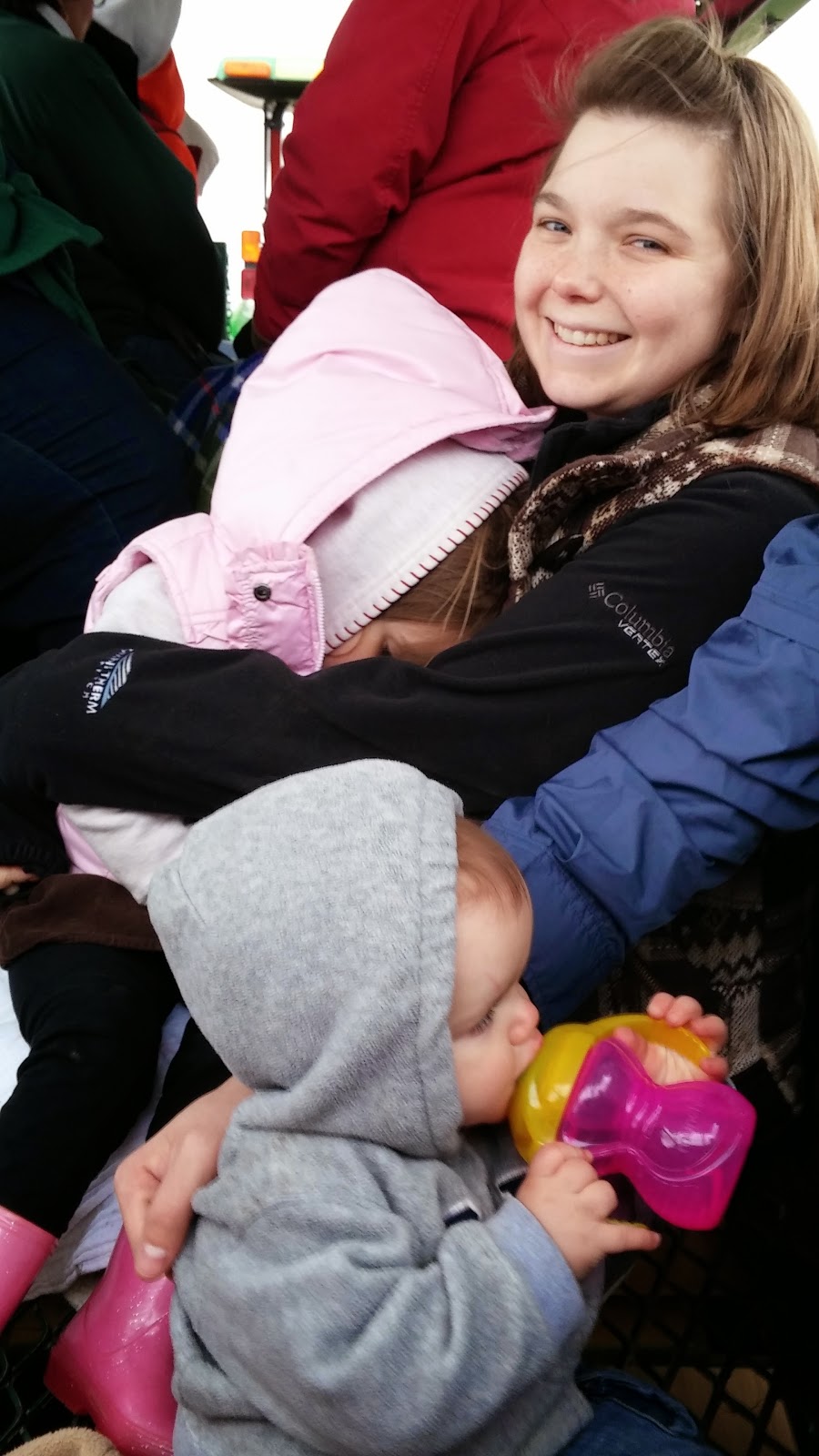 (Libby curled up with Momma and took a little nap.  I think Alice appreciated the shared warmth.  Wilson and Bean became quick buddies, they even shared a sippy cup!) 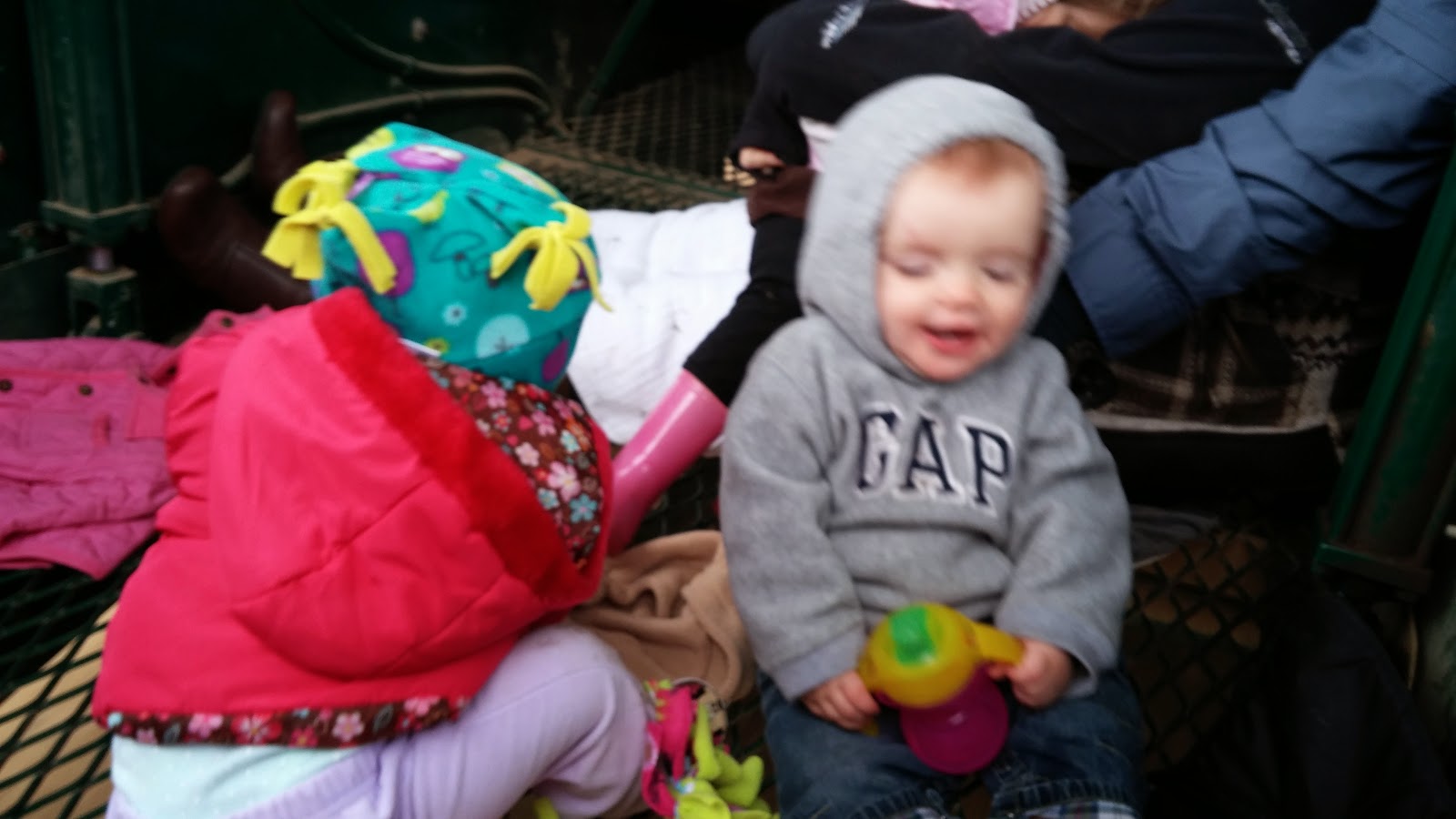 (If only it were easy to coordinate two toddlers to take a picture together - let alone on a wagon ride!  Wilson is just a month younger than Bean and has beat her to walking.  I guess having an older sibling gives you the right motivation.)

We had to take a shuttle from the parking lot to get to the festival.  When we got off the shuttle, we layered up as much as we had and started to walk through the pumpkin festival.  The sun was just starting to go down and they were lighting the pumpkins.  We got to the end of the pumpkins to the food area.  We were pretty bummed by the options - elephant ear, french fries, or an Auntie Anne's cart.  We (well, I'm speaking on behalf of the group) were done with being cold and decided we'd end the night with a meal together. We stood in the cold while searching up possible dinner locations on our phone.  We decided to try an Asian place, so we headed back out the pumpkins and realized that the parking lot really wasn't that far.  So we opted not to wait in line for the shuttle, but walk back instead. 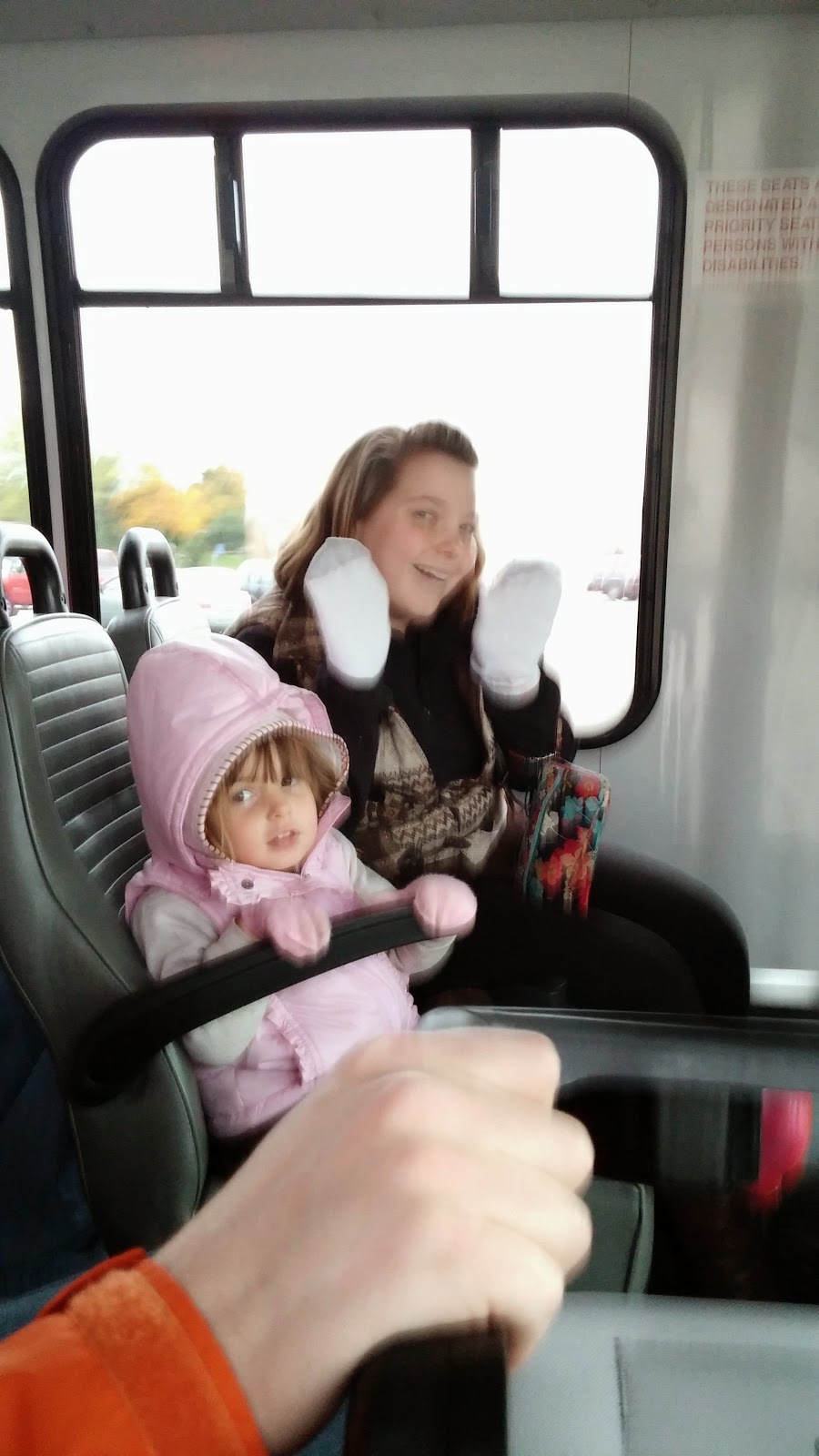 (Alice and her "gloves" that she found in her van.  Can you guess what they are?!  She kept asking, "Do you think people will notice??" Oh Alice.) 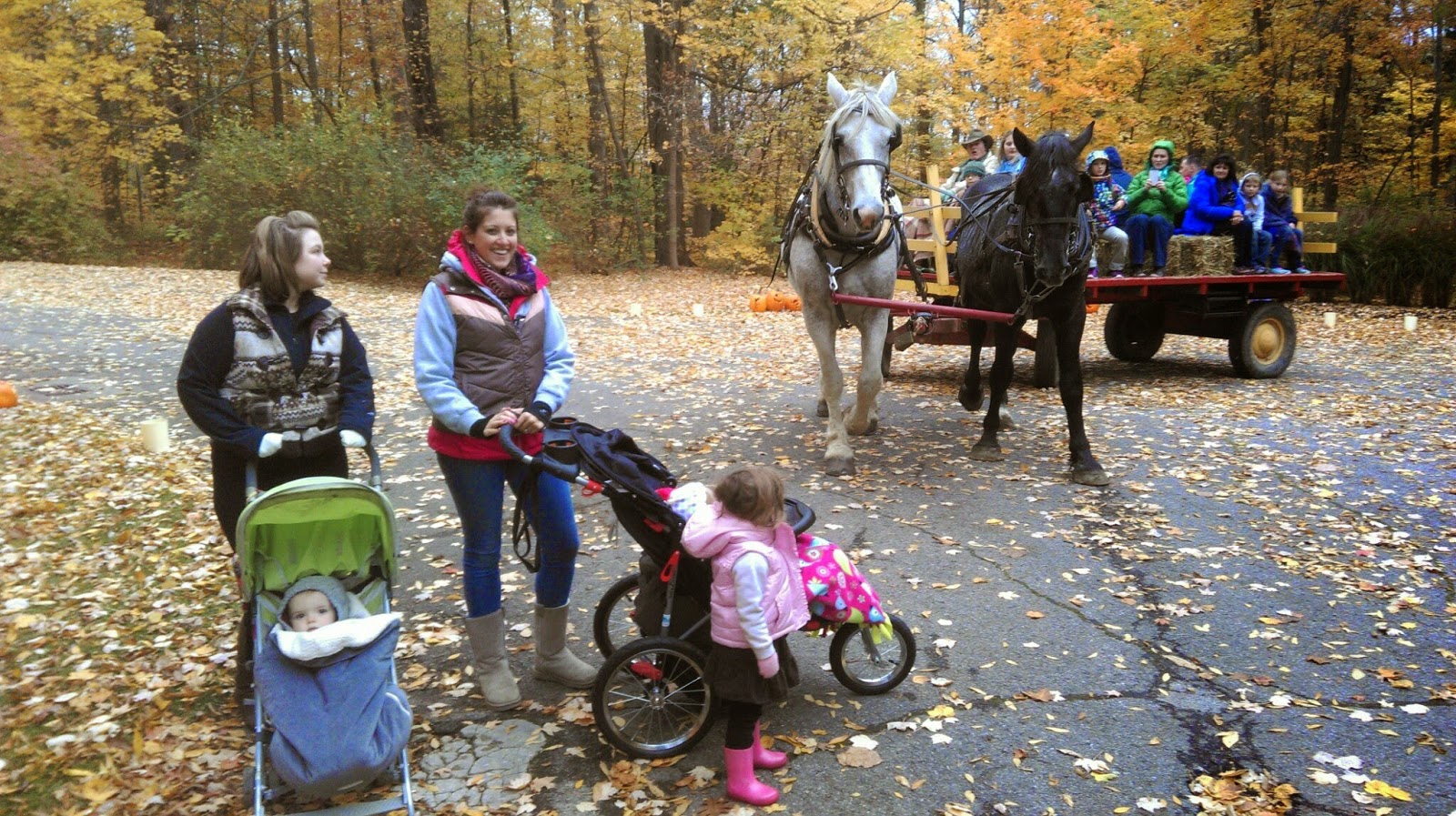 (Trying not to get hit by the horses at the pumpkin festival.) 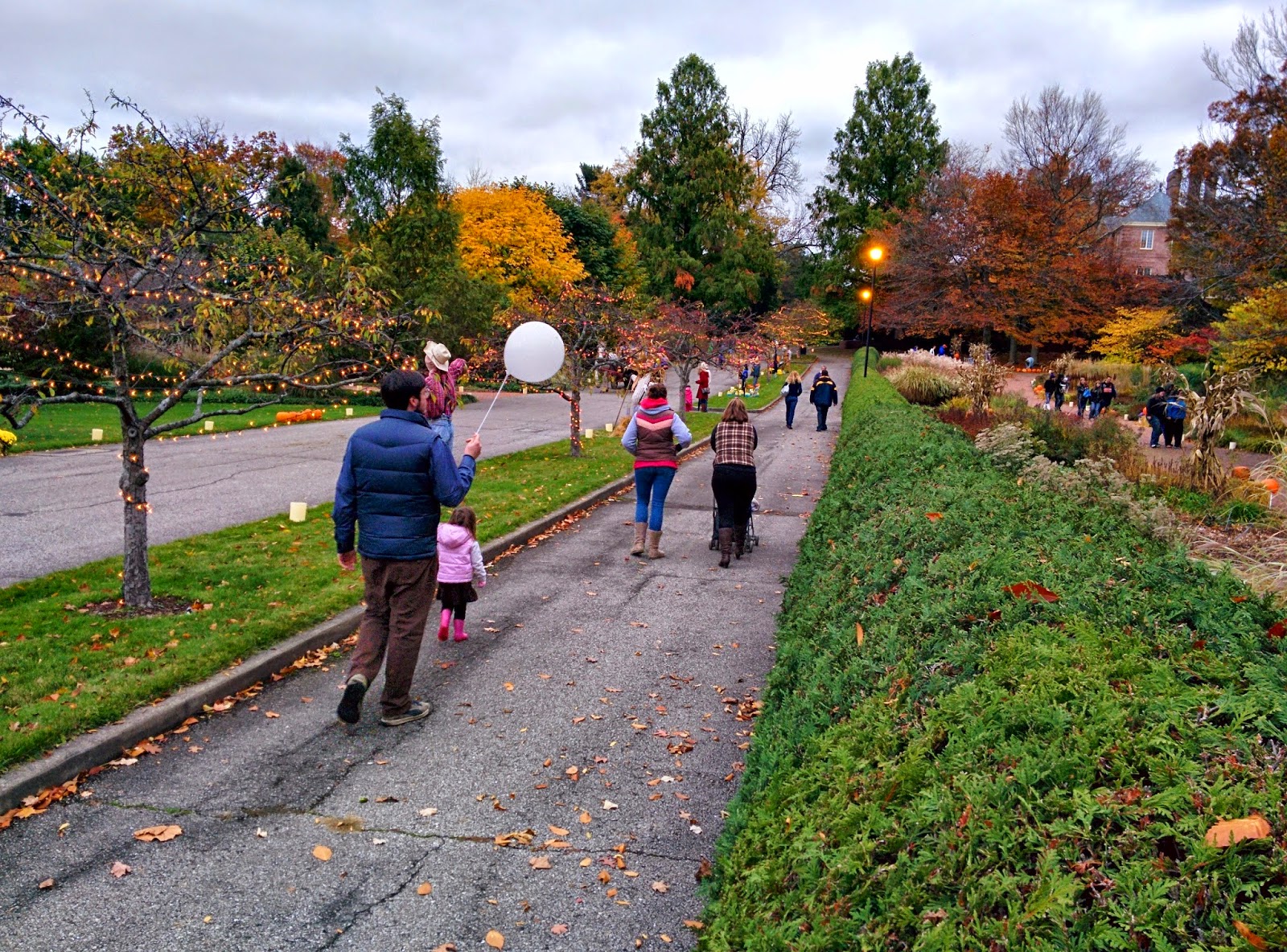 (Mitch rocking Libby's balloon.  I promise there were actual pumpkins at the festival.  Ha.  They would be lined up along the walking paths.  Then there was a stretch in the center of scare crows that had been sponsored by different groups for a contest.) 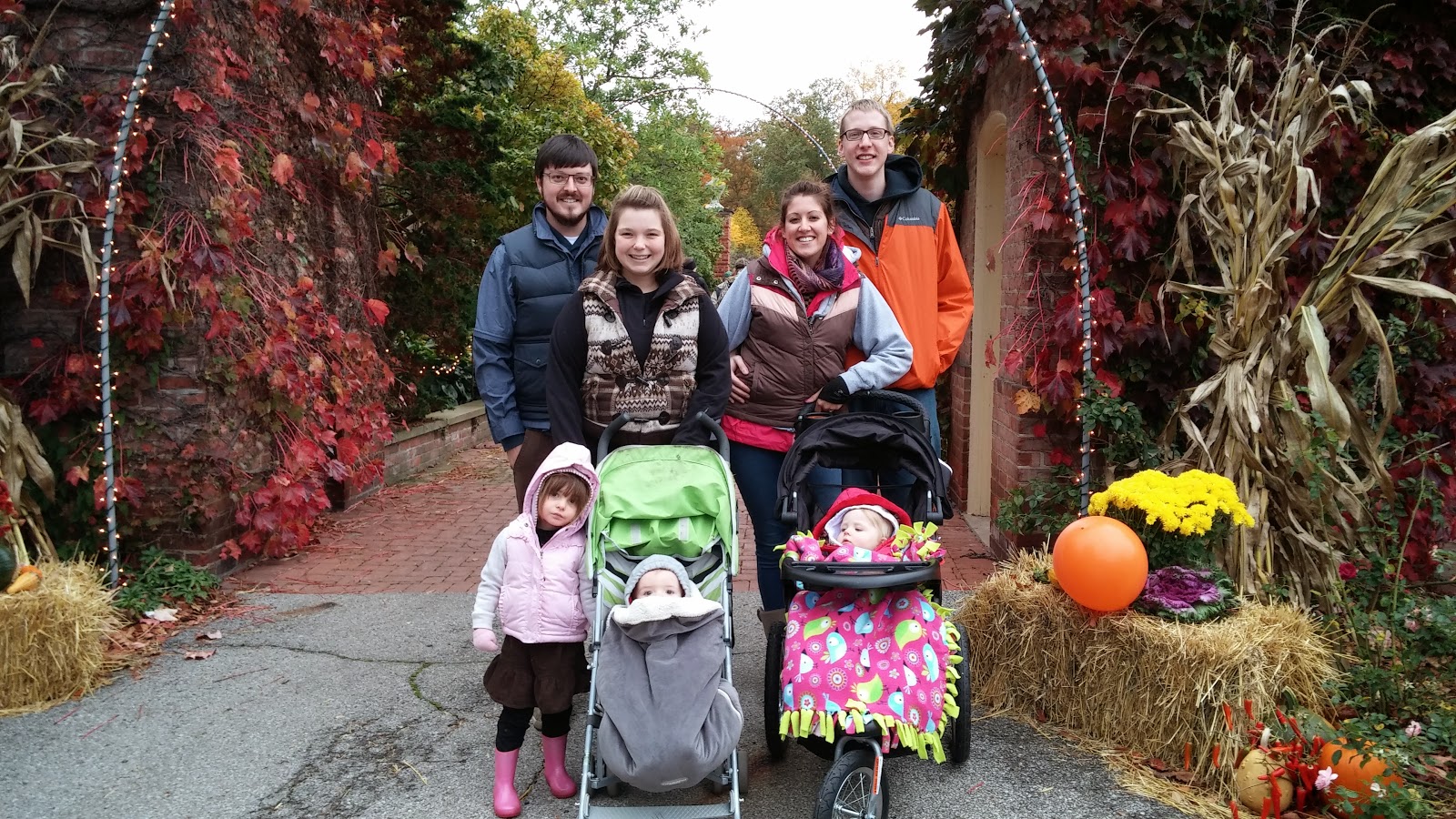 We ended up taking the wrong way (the sidewalk turned into a grassy hill) but were able to trudge on and make it back to the cars.  Once we navigated to the Asian restaurant, Mitch decided to go check it out before unloading the kids -- good thinking!  The restaurant had white table clothes, candle light, and we realized all the clientele walking in were dressed up.  We scrapped that place and headed to a Greek restaurant instead.  It was a small hole in the wall place and accommodated the kids perfectly!  We had a good time with our servers and the food was delicious.

After dinner, we said our goodbyes and loaded our kids up.  We had an absolute blast with our friends and are already planning a meet-up in December with them :)!
Posted by Unknown at 9:37 AM