Tagging along with Daddy to Cincinnati

Steve had to go for training (yet again) in Cincinnati for a few days. Bean and I decided to tag-a-long for a few days while he was down there.  We left late Monday morning and headed south (in separate cars) to Jungle Jims!

We were originally going to go to Bass Pro Shop to check out their Christmas display, but decided to stop at Jungle Jims instead.  It's a huge grocery store that has all sorts of different food.  We spent a little time meandering through the store so Bean could see the singing animatronics and also to check out any weird food they offered.  We came out of the store with a gingerbread kit, some root beers, alligator jerky, and some chips and salsa.

After the big grocery store, we headed over to a mall so I could get my bi-annual wedding ring cleaning (it keeps the warranty valid).  Steve got my rings from a bigger name store in hopes of being able to have it cleaned wherever we end up living.  Of course, the past 2 places we've lived doesn't have that store! So I have to be strategic about where/when to get it checked.  While I got my ring inspected, Bean and Steve scored a pretzel from Auntie Anne's.  Yum!

We were supposed to meed up with Ashley & Scott at their house around 5.  We got done at the mall around 4 and knew it'd take 20-30 minutes to get to their house.  We were able to miss the rush hour traffic which was nice; however, we had to wait in the car in their driveway until they got home (or called us with the code to get in).  Once Ashley got home, we loaded up in our car and headed to see the Christmas lights at the Cincy Zoo.  The weather radar showed possible rain coming, but we gambled the trip anyway.  It was sort of sprinkgly when we started and had a pretty thick mist going at times, but it ended up letting up and ended up being perfect.  There wasn't as many crowds either because of the weather. 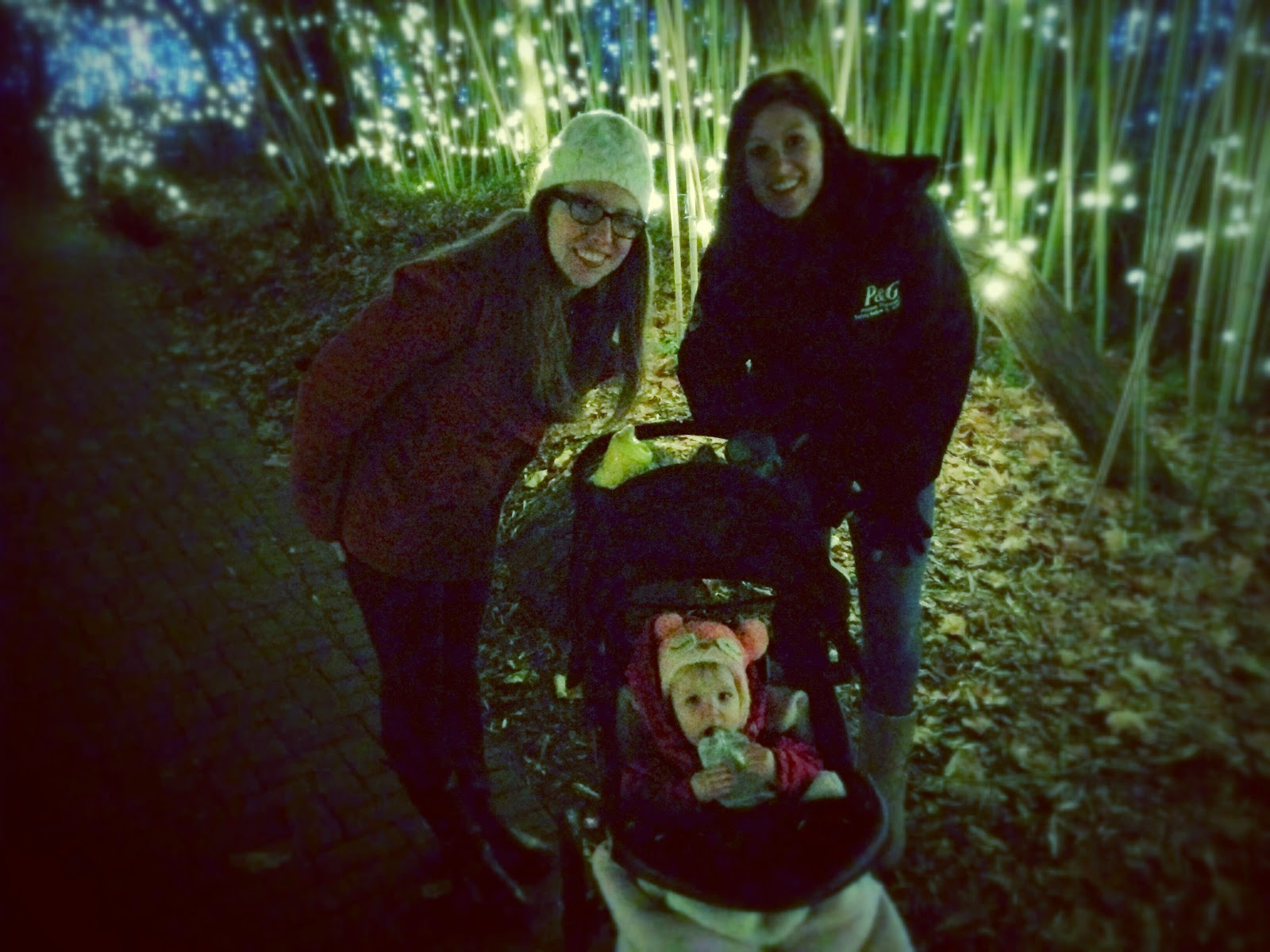 (Christmas at the zoo!  We didn't let the rain stop us from having a good time.  Unfortunately, we didn't take any photos of Ashley modeling "engagement photos" she had seen taken in the light display.)

After we were filled with the light displays, we met up with Scott at Mellow Mushroom.  We typically go to Dewey's (our favorite pizza place) when we are in Cincy, but decided to give Mellow a shot.  In the end, it was good, but it wasn't no Dewey's (shhhhh, don't tell Ash & Scott!).  Bean is a trooper (we find ourselves saying this a lot).  She slept a little bit in the car, but was really tired by the time we got to dinner.  We finished up dinner, went back to their house, and Bean went right to sleep. 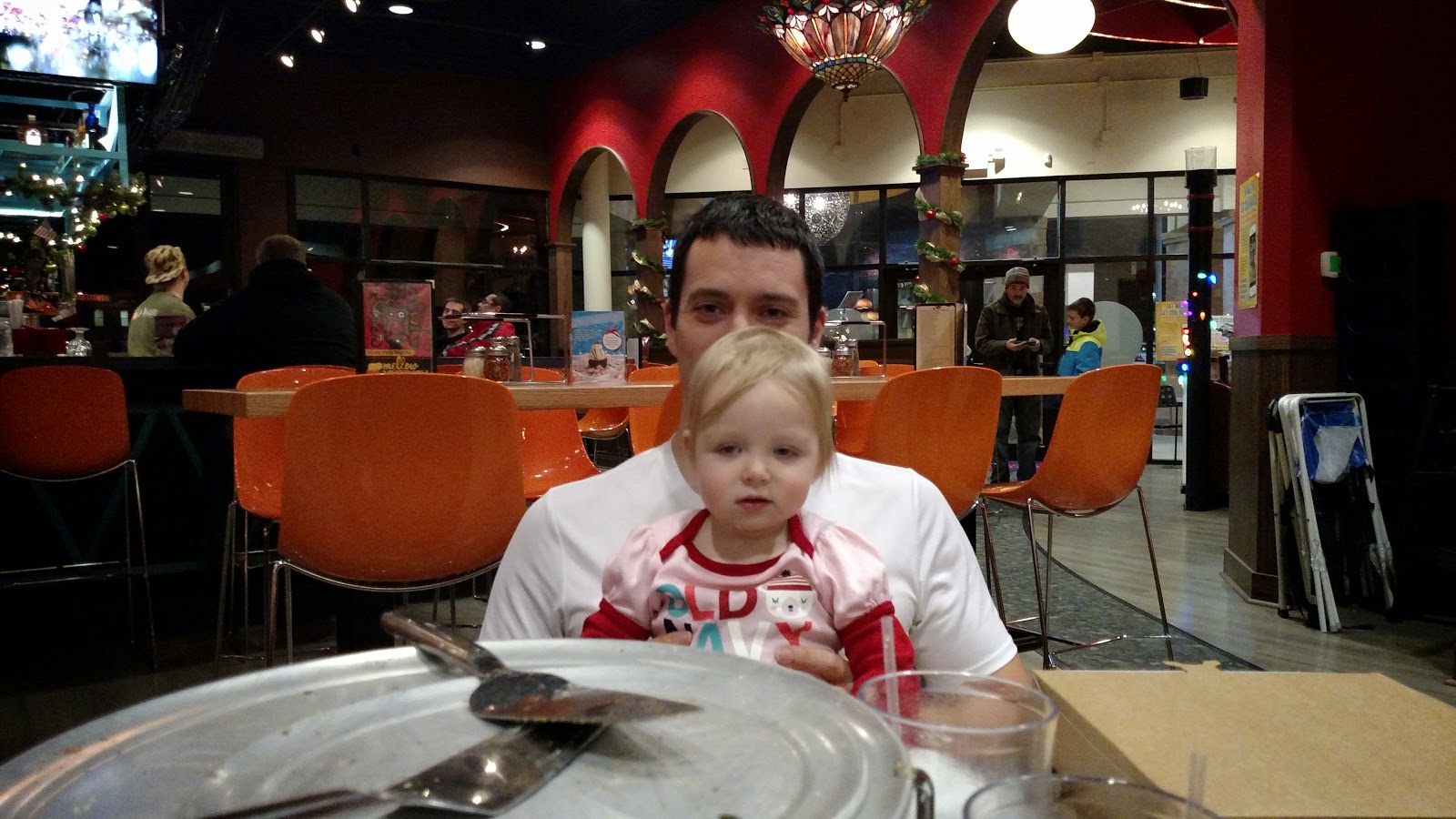 (Bean typically loves her Uncle Scott.  Don't let her face of hatred be assumed it has to do with Scott holding her.  It has everything to do with her parents schlepping her around for 5 days straight.)

Tuesday morning, everyone else went to work and it was just me, Bean & Tyson.  Bean was a little unsure of Tyson in the beginning (because he's so big!), but she quickly warmed up to him and thought he was hilarious as he played with his ball.  I took Bean out shopping at a nearby Target (another store that we don't have near us) to try to find a cheap pair of black pants for my upcoming Christmas cantata.  I had no luck at the Target, but a quick pop-in their Meijer resulted in a pair for $7.  Sweet!

We got back to their house in time to eat lunch, terrorize play with Tyson, and then put Bean down for bed.  This was the first "real" nap Bean had gone down for in several days.  With our trip to Cleveland and then turning around and heading straight to Cincy, all her naps had been on the go.  She took advantage of being in her pack-n-play and slept for over 3.5 hours! It was quite nice :)! I worked on our Christmas letter, blogged, and of course, caught up on some Jamberry business.  Tuesday night was low-key.  We stayed in and Ashley made dinner. 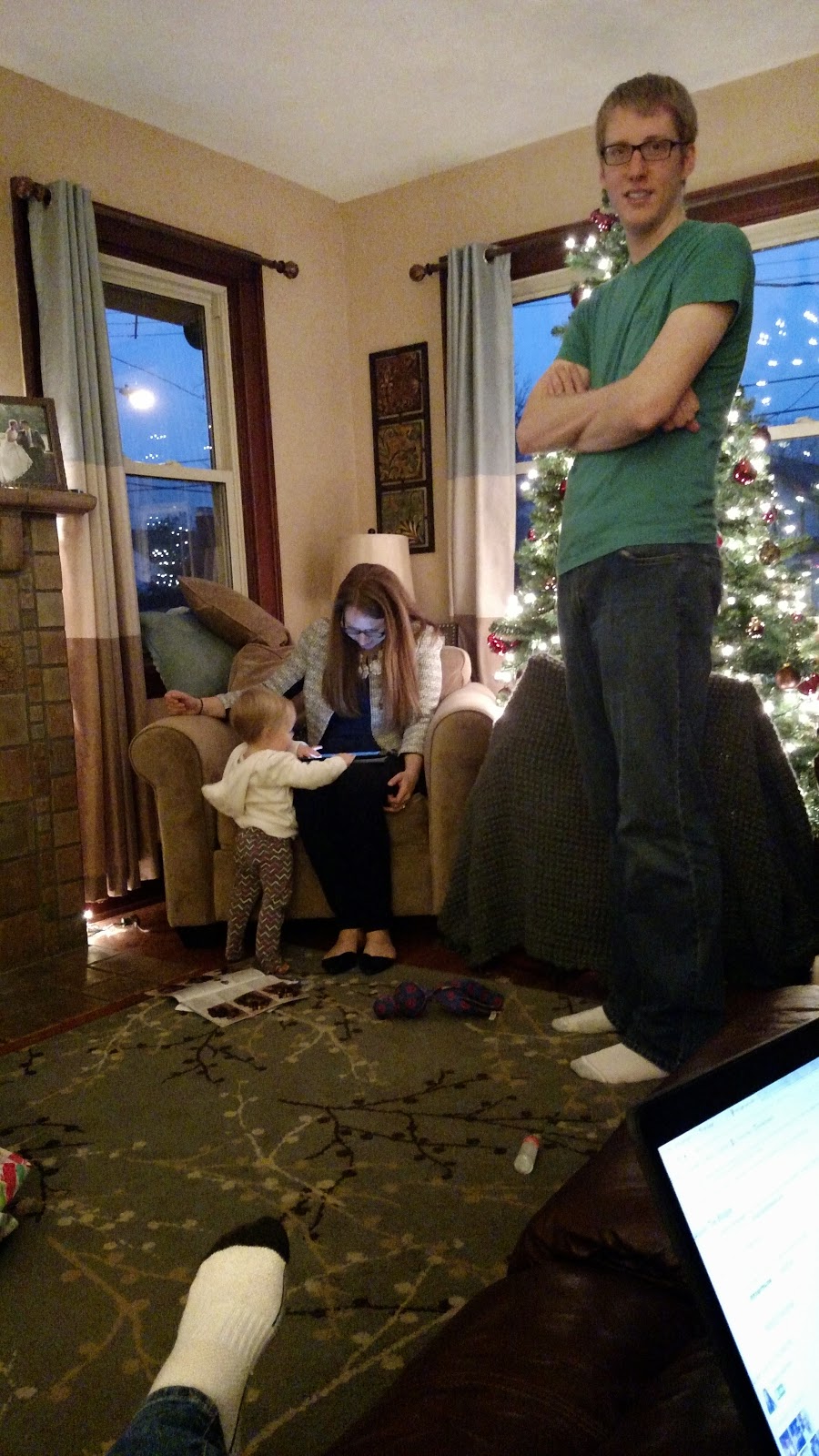 (Bean teaching Aunt Ashley how to properly use her iPad.)

On Wednesday I packed up all of Bean & my stuff, loaded the car and headed back towards home.  We stopped by at my aunt & uncle's house in north Cincy for the afternoon first.  On the way there, I thought the road noise sounded really load, but just chalked it up to other cars around me.  Well as I pulled off the highway on the ramp, I realized the loud noise was coming from me.  I instantly knew what the noise was.  I was dragging the bumper bracket that the blasted deer broke from 3 years prior.  My dad had fixed the bracket by securing a paint stick over the bracket with wire; however, apparently the life of a jimmy-rigged paint stick bracket is only 3 years.  I didn't have anything to help hold the bracket up while I got to my aunt/uncle's house, so I had to stop a bunch and try to shove it back up into the bumper.  I eventually got there and my uncle was able to duct tape it back up.

Bean LOVED being spoiled by my aunt & uncle.  They have a grandson and let Bean in on all his little play areas (like specific cabinets, his toys, etc).  She loved it.  She was able to explore all around and of course be the center of attention.  She even thought it was pretty fun to decorate my cousin's wheel chair spokes with bright straws.  We hung out there for several hours until it was time to hit the road and make it back home. 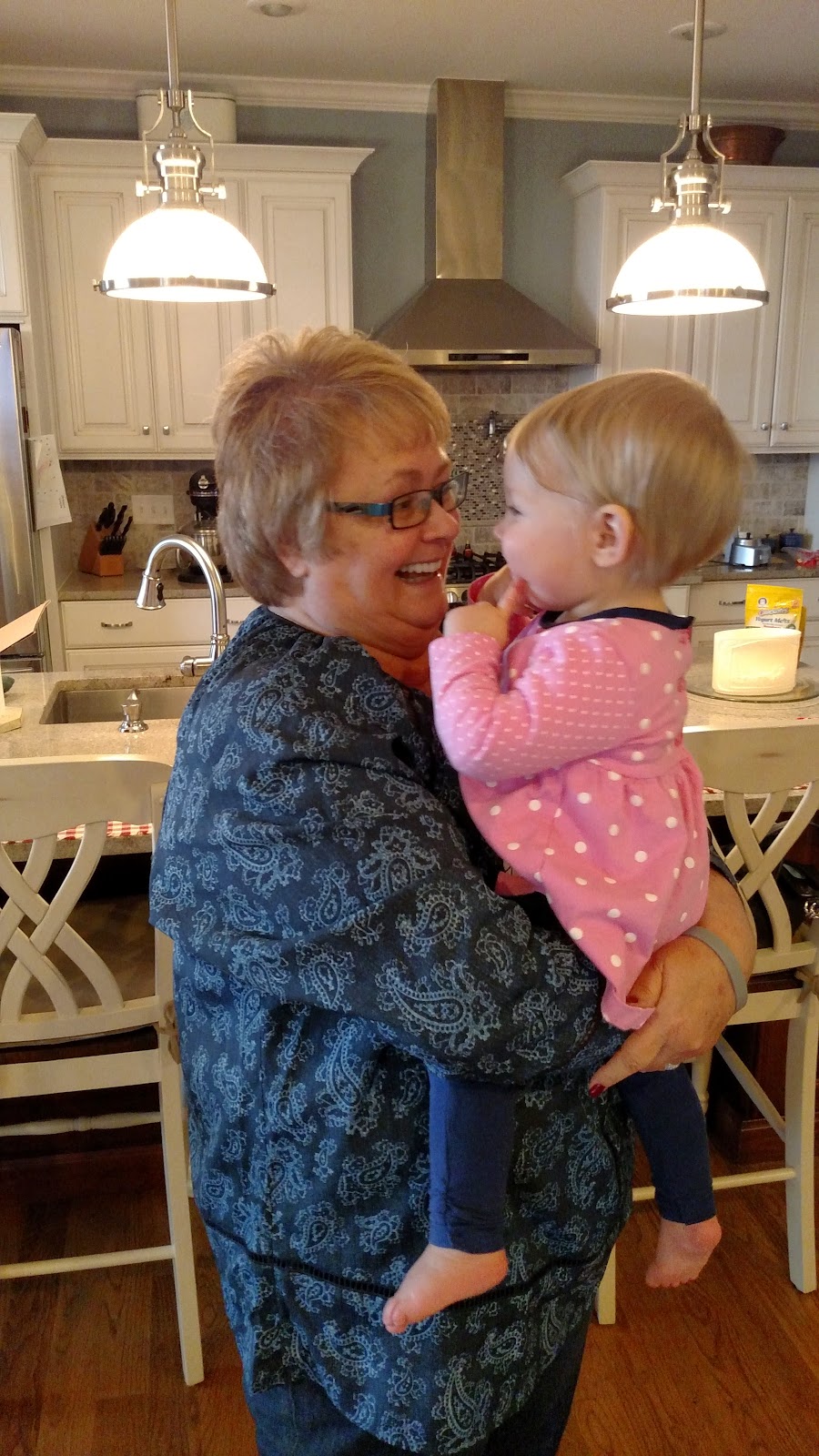 (Bean's great aunt Joni!  They bonded and were instant friends.) 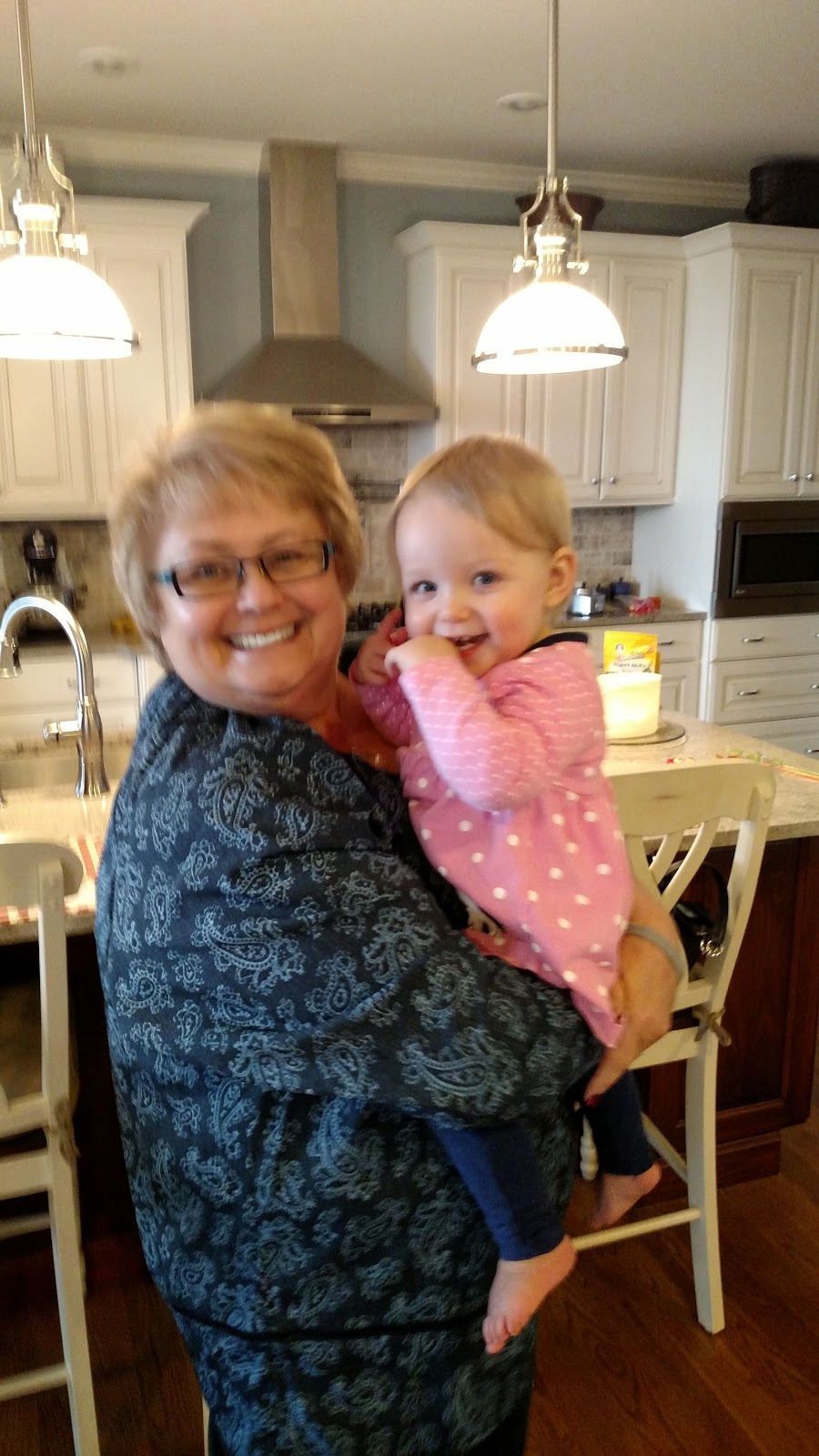 (Look at those smiles!  I love having family close to love on Bean.  Now I just have to take advantage of them more and visit more often!  They are now just a little over 1.5 hours away from our house.) 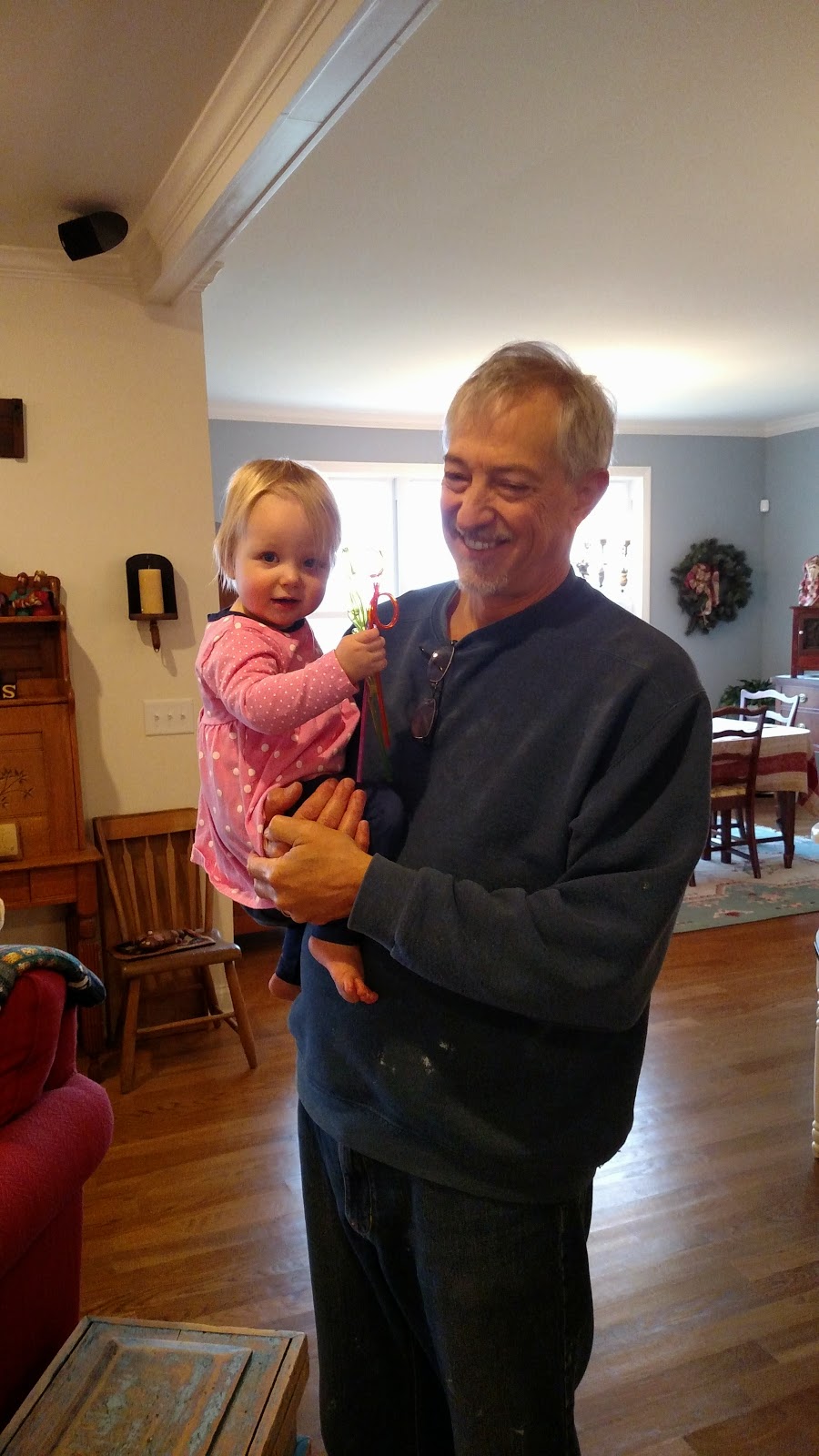 We got home just in time to unload the car, scarf down a quick dinner, and get back in the car to head to church.  I had to be back early (which is why Steve and I drove separately) so that I could go to all my choir Christmas cantata rehearsals.  When we got back home that night after church, it hit me that i was officially going to be a "single mom" for 24 hours.  That night marked the first time that Bean and I were all alone.  Luckily, she got the memo to be good to Momma and slept through the night.
Posted by Unknown at 7:52 PM