With Sprout due in just a little over a month (at the time of mother's day), my own mom was willing to come out and spend a few days with us and give me some much needed help!  She claims she didn't do much, but just having an extra set of hands around the house and someone to give Bean some extra attention does wonders for this tired momma ;-).

She came the week leading up to Mother's Day.  Between having her here for a few days and Steve taking over most of the parental responsibilities for my Mother's Day Weekend, I got nearly a week "break" of being a mom.  I obviously just can't turn that off and desire to still spend time and give attention to Bean, but it was nice to not feel the weight of "motherhood responsibility" for that week!

While my mom was here, we had a library trip, special lunch outing, ran other errands, and mom babysat 2 nights in a row! It worked out that she was able to watch not only Bean, but also Bean's friend James one evening while I attended an awards ceremony for James's mom (which she won the Lima Chamber of Commerce award for emerging business! Go Sara's Sweets!) and Steve was at AWANA. 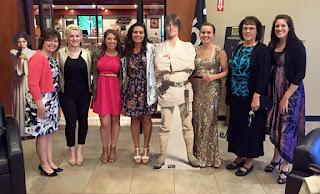 (Congrats Sara!!  The awards ceremony was on Star Wars Day - May 4th and they had a Star Wars themed Gala.  How could I pass up on that?!) 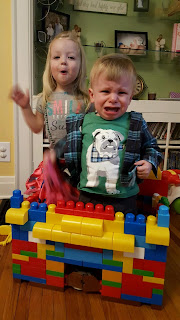 (Mom documented her portion of the evening with the 2 kids.  Bean being her typical crazy and James losing it over Bean being crazy. Haha, okay, usually it's not this bad.  He didn't nap and just wanted to cuddle and NOT play in a block castle with Bean.) 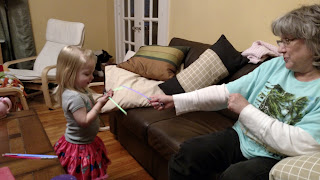 (I stole some light saber/glow stick decorations to take home to Bean.  Ahm had to show her the proper way to fight with light sabers.) 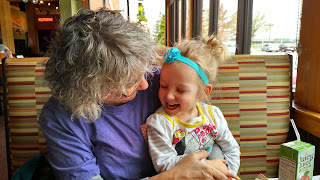 (Soaking up all the attention) 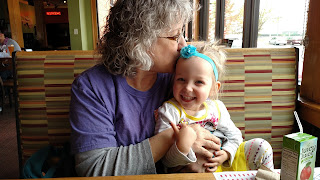 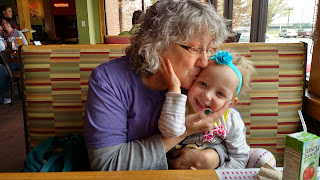 My mom returned back to IN on Friday.  In the Ackerman house, Mother's/Father's Days are just enjoyed on the Sunday, but the entire weekend.  Steve stepped up parental duties and did all the story times/ tucking in at night (and dealt the multiple bathroom trips or crying because a toy fell out of bed) and even let me sleep in one day (usually I let him sleep in on the weekends since he wakes up so much earlier during the week).  He also made sure to make my duties easier by getting dinner 2 nights AND lunch one afternoon.  I only had to cook once the whole weekend, and it was glorious.  But the best part of my weekend, was soaking up time with my precious little family.  Hard to believe there will be one more added into this crazy soon! 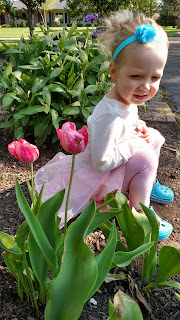 (I tried to get a decent shot of Bean with some flowers to send out to our mom's and such, but she was very uncooperative.  She didn't care for the sun being in her eyes, or for sitting still.  She just wanted to go and play on the neighbor's swing set.) 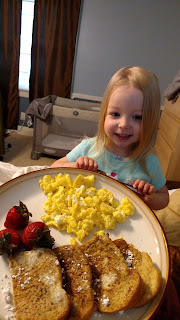 (I was surprised on Saturday morning with breakfast in bed! I was blown away.  I actually was thinking of asking the others if they wanted to go out and get breakfast once I was up, but Steve and been secretly slaving away in the kitchen.) 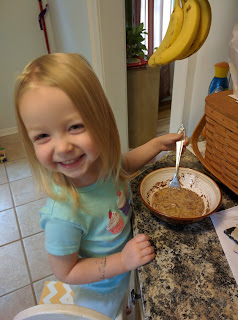 (Steve is not a cook.  He will be the first to admit that.  Good thing he had a cute sous chef who knew what she was doing to help him out!  I was very impressed with his cooking! I'm not a fan of french toast or eggs for that matter, but his were very good! He had researched the recipes and did a great job!) 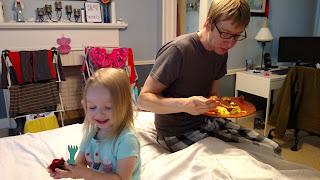 (We all piled on the bed and ate a delicious breakfast together.  I'm not sure what Bean thought of eating on the bed.  I really thought we'd hear about it and her want to eat up there for meals later on, but she hasn't asked about it.) 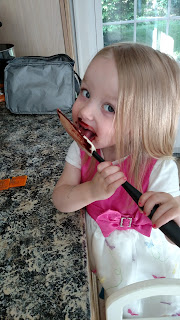 (We ended our weekend by making some special red velvet brownies.  Bean LOVES to help in the kitchen.  She always gets disappointed when she can't help me with something -- like making dinner with raw meat.  I can tell you one thing, if there's chocolate involved -- she's right there to help in the process and earn her chocolate chips or licking the spatula.) 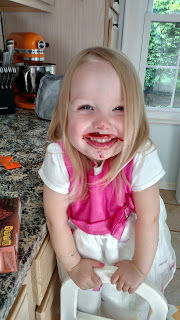 (A chocolate mustache is always the best kind of mess to clean up.)

I am one blessed Momma!
Posted by Unknown at 8:49 PM