After 5 kid-free days, I was worried what it would be like for Bean to return.  I feared many meltdowns and having to detox off of grandma for awhile.  I tried to plan a few days of errands and lots of activities to keep her occupied.  So with our first full day together, we had a girls morning out and went and got hair cuts!

Bean had never had a hair cut and I was being crazy about not wanting to cut her hair and mess it up.  But the back of her hair was longer than the front and it kept getting in her face, so I decided we just had to get it done.  Bean didn't want to go, but when I told her I'd get mine done, too, she got really excited.

I'm cheap and just get my hair done at Great clips.  It killed me that I didn't have any coupons to use, but we ventured out anyways.  We had to wait a little bit, but luckily there was a Panera right next door.  So we headed over for some lemonade and a cookie to pass the time (it helped immensely).  I went first and Bean just played on the chair next to the one I was in.  When it was her turn, she crawled right up in the chair and handled the cut like a champ. She had a hard time keeping her head still, but overall did great. 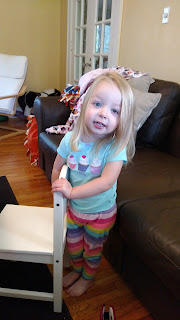 (Bean's hair before the haircut.  She used to love wearing a "princess bun", but more recently just wants her hair down.  It would get food and sticky candy in it and that was the tipping point for needing it done.) 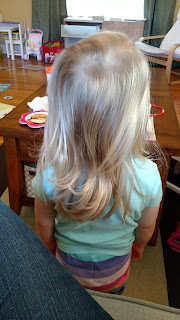 (Such long hair! Hard to fathom that her hair was BLACK when she was a newborn.  It's never been cut, but she did lose most of that dark hair as a babe, and then the blonde hair grew in.) 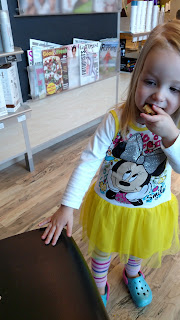 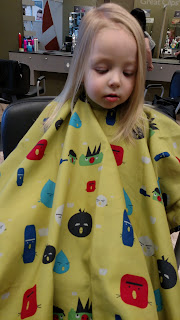 (Unsure of what's going on, but intrigued by the Angry Birds cape.  Bean got introduced to Angry Birds while staying with Ahm thanks to the current McDonald's toys.) 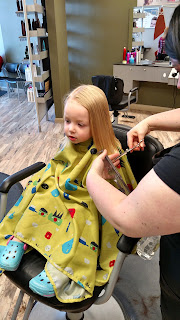 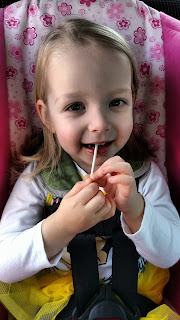 (There was a cup of suckers at the register and she eyed those babies from the moment we walked in.  Here's to shorter hair that hopefully won't get stuck in it!) 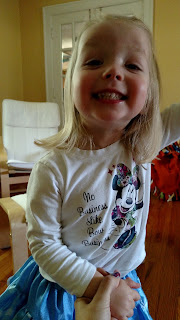 (This kid is a ham and hates to stand still.  I tried get a better picture of her shorter hair, but this was the best that could be managed.)

I titled this post crisis mode because in the same day that I cut my hair to be more manageable (aka, mom cut) I also had to go pickup my new glasses.  For anyone that knows me, I had LASIK done in 2012 and apparently I'm in need of it again.  I don't need to wear the glasses around the clock, just when I am going to be looking at far distances for a length of time and definitely while driving, haha).  I have a lifetime guarantee, can't get it done being pregnant and don't really know if it's best to hold off til after all kids are had.  I need to call the place and follow-up with the guarantee information to figure it out. And to top it off, I made the realization that in less than a month, I'll have TWO kids, totally look like a mom with the new cut and glasses, AND hit my last year in my twenties. YIKES. 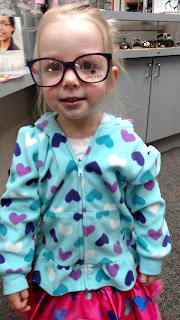 (Bean loved the trips to the eye doctor.  She loved trying on all the glasses.) 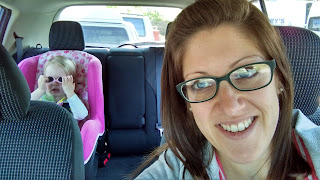 (Now that I wear my glasses, Bean wants to have glasses, too.  So she's rekindled a love of her sunglasses. I didn't think to take a before shot of my hair before my cut, but this was it.  You just can't really tell the length of my hair.) 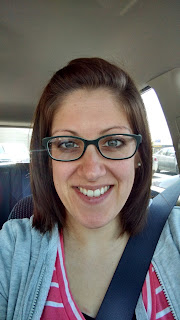