In case you were wondering how Ramses's Great Escape ends. . . 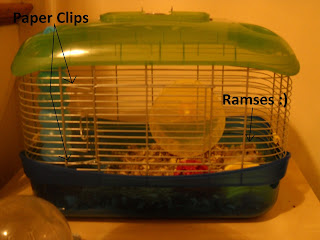 Ramses's story ends with him trapped in his cage.  We decided that the only way he was getting out was through the "front" door.  I was able to take 2 paper clips and pin the door permanently shut.  Unless Ramses has smuggled tools into his cage (which I wouldn't put it past him), he is shut in pretty tight.  We had to go this route because he is not meant to live in the bathtub out of fear of escape.  He is back on his perch and has been very well behaved.  He even earned a carrot the other night (okay, maybe I had a little piece left over from cooking and just gave it too him because he's just too cute).
Posted by Unknown at 10:07 AM