After our busy week of visitors, Steve and I both fell victim's to whatever crazy sickness is going around.  Steve had actually started with a cough and sore throat while his parents were here, but mine held off until everyone had left.  Steve is convinced that I am the one who got us sick; although, the facts clearly show Steve is the culprit:

Steve started with a sore throat on 2/17.  The sore throat quickly developed into a cough that settled in his chest.  There was much hacking and coughing and not much sleeping for a couple nights.  He had to keep a constant supply of cough drops nearby all day and night.  As of yesterday, Steve is finally back to normal.

Lindsey started with a sore throat on 2/20.  She had a fever and sore throat all week, but never had the intense coughing like Steve.  She only coughs right before bed and when she gets up, but that's as far as the cough has gone.  She's still got some lingering issues with her throat, but basically back to normal.

Who's to blame??  Obviously, Steve is the culptritt since he got it first and had it more intense.  Another reason that Steve is to blame -- he is the one that interacts with outside germs on a daily basis.  Chalk this one up for Steve.

Due to the visitors and sickness, we weren't able to celebrate Valentine's Day until this past weekend.  My gift to Steve was a bag full of his favorite junk food (gummy bears, beef jerky, etc).  I actually gave it to him on Valentine's.  He had a rose for me on Valentine's Day but his gift for me was making me dinner.  Steve has maybe made dinner for me once since I've known him (although, I think I swooped in at the end of that meal to finish it).  This time, I wasn't even allowed in the kitchen.  I knew of the ingredients (because I bought the ingredients). 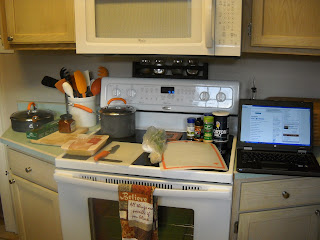 Before I was banished from the kitchen, I had to help Steve find all the gadgets and accessories needed for his meal.  (I do all the cooking and most of the dish washing, so he is oblivious when it comes to kitchen items beyond silverware, plates, bowls, and cups). 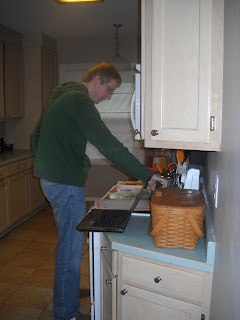 I took one quick action shot before being banished to the living room.  I was able to sit and enjoy a favorite show while waiting for dinner to be ready.  It was bizarre to smell dinner without being involved in the process. 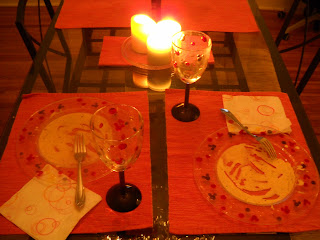 I meant to take a picture of the meal, but I was too hungry and completely forgot.  Steve scored extra points for pulling out the "special Disney" plates and glasses.  The name of his meal was "Creamy Cajun Chicken Linguine".  It consisted of linguine noodles, chicken cut into small pieces, sun dried tomatoes, cream, and green onions.

He did an awesome job!  He learned what it's like to read recipes (this one called for 1 to 2 cups of cream which baffled him), time management (making sure everything was ready at the same time), and how to make his wife happy :).  I think he should make dinner more often!
Posted by Unknown at 8:09 PM