Our little Ramses has started to really show some personality this week.  Apparently, he is a brilliant mastermind.  For two nights in a row, he somehow broke out of his cage (leaving no evidence), to get cornered in the kitchen.  Both times, he got himself caught in the same area.

For those of you who don't remember much about Ramses, he is a Robo hamster (again, not robot for those of you who think I have an electronic hamster trapped in a cage).  Robo hamsters are very small, less than 2" in length,  and are very fast.  You can't really hold or cuddle these kinds of hamsters.  They are however, fun to watch, especially when you put them in a ball.  Since he's really fast, we usually have to outsmart him into his ball by cornering him in his cage, giving the ball the only escape.  (This method is also how Steve caught him in the mornings after he escaped and put him back in his cage).

Because our house is older, we have antique floor registers that have lots of small openings.  However, they are not smaller than Ramses.  If he got too adventurous on his nights out, and ran over one of these registers, he would have fallen through, meeting his demise in the ducts and potentially heather (something, I don't want to think about).

If you take the floor registers out of the equation, just imagine a 2" small ball of fluff running around the house, never to be caught.  Again, another scenario I don't want to think about.

In general, I hate the step that leads from the door entryway into the kitchen.  I often forget about it and trip myself on the step.  However, without this small level change, Ramses would not have gotten himself cornered  (again, 2x in a row) and we would have never found.

I like to think that God was looking out for Ramses.  I know it's crazy to think but the Bible says that God looks out for and knows even the sparrows, so why would Ramses be any different?  For whatever reason (besides my sanity) Ramses is meant to stay in this house a little longer.  He gives me some responsibility, something to take care of (besides the plants I've shipped off to my mom due to the move and general neglect), and he lets me go on rants during the day without interrupting.

That all aside, Ramses has caused quite the conundrum in the household.  We think we have an idea of how he's getting out, but are not 100% sure. The first night it happened, Steve caught him the next morning and put him in the tub.  I inspected the cage and thought that he might have gotten out through the top.  We have caught him in the past climbing up the walls, but didn't think he'd be strong enough to get out.  However, this morning, I noticed one side of the lid was not latched properly.  I put his cage back on his hallway perch and didn't think much about it.  However, he broke out again that night.  Now he's permanently banished to the tub.  We don't want to give that critter a 3rd opportunity of freedom.

We tried to set up the computer with a built in camera to video tape him last night.  However, the computer only recorded 15 mins before shutting off.  We also needed the light in the bathroom on to be able to see with the camera, and Ramses doesn't act crazy with the lights on.  If only we had a night vision camera. . .

Ramses the mastermind has put a cramp in our style.  We are planning a vacation in March and were planning on shipping him off to my parent's house.  However, he can't be trusted.  Good thing they too have a large bath tub to house his cage. 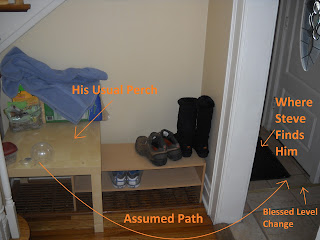 A Mastermind in Action 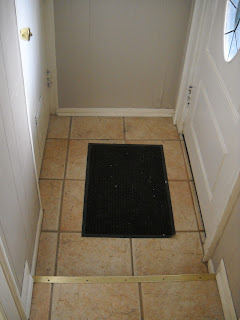 Close up of the area he gets cornered in.  Thankfully, he hasn't figured out that he could probably fit under the door that leads to the basement (left).  That's another scenario I don't want to think about. 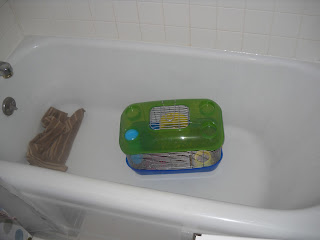 Ramses new home located in the bathtub. He hasn't broken out into the tub yet. 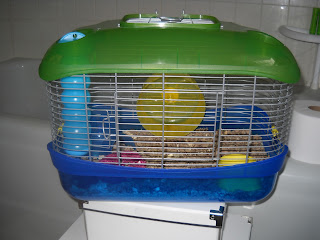 Close up of his cage -- there is a hinged door locate on the front.  We believe he is able to push the door open enough to push his way out.  Hopefully we will catch him in action. 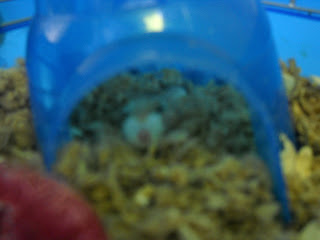 A closeup of the mastermind sleeping.  He's probably preparing his next escape plan.  He's just too cute to punish :)
Posted by Unknown at 11:16 AM