Steve and I have really gotten involved with our new home city.  We've found a church that we are planning on joining and have already begun to make deep relationships with people in our Sunday school class and plan on attending a Bible study in the next couple of weeks.  I am also joining a woman's Bible study through a friend from the class.

We've also been a kick learning about Lima and its history.  Earlier in the year, we visited the Lima City Museum and got to see key pieces from Lima's history (like a locomotive and the jail cell Dillinger broke out of).  Just a few weeks ago, we went on a "Spooky Lantern Tour" and got to walk around downtown Lima with a tour guide that shared a lot of history from the city (most of the stories tended to focus on mysterious deaths and supposed hauntings -- hence the "spooky").

While on the tour, we got to go into some old buildings in the downtown area and here about their history.  One building used to be an old bowling alley and now has legal offices.  Our favorite building was the Lima Trust building.  It was built back in the 20s and used to be a busy bank.  Now, the building is pretty much condemned and undergoing slow reconstruction. 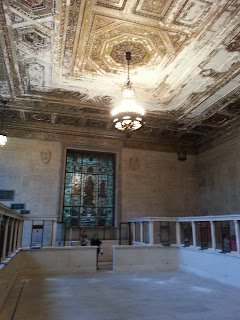 (Inside the Lima Trust building. You can see all the teller windows around the room.  The stain glass in the background shows the foundations of lima -- agriculture, oil, ect.) 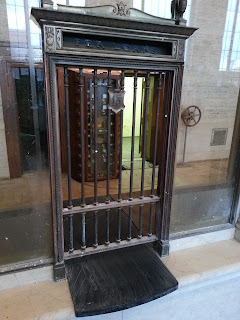 (Here's a close up of the teller window, above each one had specific titles, like this one says "Per Loans".  And through the teller window you can see the old bank vault.  We actually got to walk around and go inside it -- kind of creepy!)


It was pretty cold when we went on the tour.  We knew it would be and I had even brought hot apple cider and coca with us!  It was neat to get to hear the stories and try to imagine downtown Lima back during its bustling days.

Halloween in Lima was quite different than what I am used to.  The NW Ohio area had structured days when trick-or-treating was allowed.  So we had the pleasure of passing out candy to trick-or-treaters the Thursday before Halloween -- kind of bizarre.  And the week before that, we went to a Halloween party! 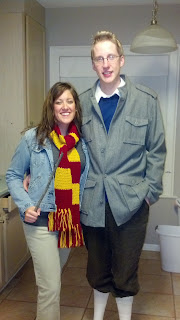 (Can you guess who we are???  There was some confusion on Steve's character which became very comical.  People would sing the theme song for the character he was mistaken for.  At the end of the night, when we left Steve went on a rant about how he in no way looked like the other character -- it was funny!)