Who knew that Steve was so into birds?  We live in a perfect area for him, as there are all sorts of little birds flying around.  Over the summer, he put out a suet block, but the squirrels ate it right away.  After some research, he bought a window bird feeder that squirrels are unable to reach.

All summer long, we were convinced that the birds were too scared to eat out of it because of the reflection in the window.  Steve switched out the food a couple times, but we never saw any birds.  In early fall, I was sitting in the living room and heard a noise and discovered a little bird in it!  I tried to take a picture, but I had to move to get the camera, which scared the bird and resulted in a very fuzzy picture.  Steve just had to take my word that there was a bird in the feeder.

Since then, Steve has seen birds in it, but we've never been able to take a picture.  As soon as we move in the house, the bird jumps ship and doesn't return.  Until yesterday --- I caught a bird in the act! 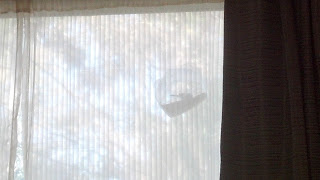 (Not the best picture, but you can totally see the bird in the feeder!  I watched either the same bird, or multiple birds, come in and out of the feeder for awhile.  Steve claims that the feeder being at an angle has intrigued the birds to come into it -- sure dear!)

Ever since we've lived here, we've heard owls hoot randomly.  We've talked to the neighbors and were told that a big owl lives in one of our trees, but we've never been able to see him.  I've even had the neighbor came over and tell me that we missed it!

Last Friday night, we were headed to meet friends at the movies.  We had just gotten out of the driveway when Steve parks the car in the road and jumps out of the car saying "THE OWL!".  Ha ha, he had seen it swoop across the street and land in the tree across the street from our house.  It was too dark to take a picture but it was neat to finally see an owl! 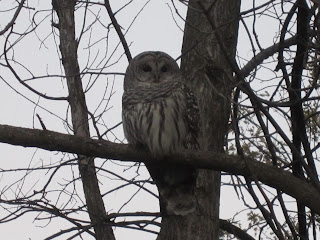 (There's something about the eyes that just fascinate me.) 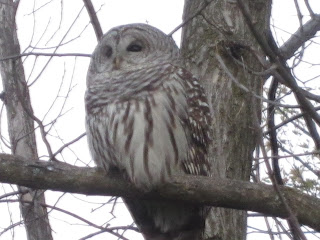 (Steve's doing research to see if we can figure out what kind of owl this is.  So if you know -- let us know!) 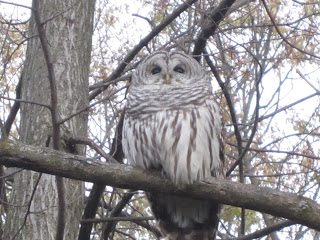 We're not sure if the owl we saw Friday night is the same as the one we got the pictures.  We'll have to keep our eyes and ears open and see if we can find another and document it.
Posted by Unknown at 10:08 AM