I have now added a new skill onto my resume -- refrigerator repairman.

We've been noticing some temperature issues in our fridge over the past week.  At first I was just noticing that items in the drawers were freezing -- like the carrots and lunch meat.  So at first we thought the fridge temperature control was up to high, so we turned it down.  Stuff in the drawer was still frozen while items on the shelves were warmer than they should be.  So we turned the temperature back up and discovered there's a control knob for just the drawers.  We put it on the warmer setting, but didn't notice any change.

We didn't think much of it until a few days later when I went to get chocolate chips out of the freezer door.  Everything in the door had thawed!!  I immediately checked the meat on the shelves, but they were still frozen.  Weird.  I decided there was just an issue in the door and though I'd deal with it later.  That night, I went to get ice cream from out of the freezer, and the ice cream was all soft!  Ahhhhh!

So obviously, there were major issues going on.  I called up my parents -- I remember them having issues with their fridge before.  My dad gave me some advice and said I'd need to take the back panel off the inside of the freezer and see what was going on with the coils & fan.

I put all my freezer items into cooler bags, turned the freezer on the warmest setting, and started to dissassemble the freezer.  There was a layer of frost on the panel that I had to get rid of first.  Then once the panel was off, i discovered that the entire coil system was frozen over -- yikes! 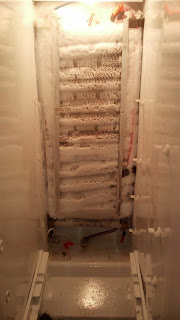 (The entire coil system frozen over -- not a good sign!)

With hair dryer in hand, I began to melt all the ice.  I'd take breaks and just let the ice melt on its own.  After a couple of hours, all the ice was melted and I got the freezer all dried up.  My next task was to locate the fan and make sure it was working.  My dad said that generally, just taking off the one panel would reveal the coils and fan; however, that's not how our model worked.  After looking up the model number online (thanks dad!), I found a diagram and figured out I had to take out the ice bucket motor and another panel.  Eventually we found the fan (Steve jumped in and helped), and discovered it was working fan.  It's possible that it was frozen up too, but I don't know.  It was fine when we got to it.

With the freezer all defrosted and dried, I began to put it back together.  I got all the screws and bolts in the right place and was almost done when I realized I had a random plastic piece left over.  I remember taking it out of the freezer, because it was just taped in, but I couldn't remember where it went.  So we made up a spot for it (the diagram I found online didn't explain its location well).  I put the ice maker back in and turned it on, then all this water started pouring through the system and got the freezer all wet.  Ugh.  This happened a few times until I gave up and turned the ice maker off. I cleaned up all the water, again.

I got the freezer all assembled and turned back on.  Within an hour, it was back in business and cold again.  I restocked the freezer and made sure to not block the fan vent (highly likely that this was the issue).  I put a towel in the ice maker and turned it on.  If it overfilled with water as I thought it was doing, I would notice it frozen on the towel in the morning.  When I got up the next day, the towel was just cold and there was ice int he machine.  I'm guessing the system was too warm when I first turned it on.  Whew!

Now we just have to monitor the temperature and make sure it doesn't happen again!  It should also be noticed the the temperature in the fridge seems to be correct -- the stuff in the drawers are no longer frozen! Oh, and I left this out.  When we first moved in, we could get water out of the door, but recently it hasn't been working.  We've also had issues with the ice options not working in the door, but that fixed itself a few months back.  Well now, the water flows through the door again!  We have a fully functioning freezer and fridge -- yay!!  Thanks again dad for talking me through the problem!
Posted by Unknown at 10:14 AM