Who would have thought that a hurricane on the East Coast would affect us here in Ohio?  Well, it happened.  While the Jersey Shore and other east coast areas were being slammed with water & wind, we experienced our first snow of the year!

It was a shock to wake up Oct 30th with huge snow flakes falling from the sky.  We probably got around a 1/2 inch of standing snow after about 3 hours, but the snow soon turned to a winter mix to rain.  By the end of the day, almost all of the snow was melted :(.

Steve and I are so ready for Christmas.  We had a pact to not listen to Christmas music or watch movies until November, but with the snow on Oct 30th, I caved.  I figured that the first snowfall should count as the beginning of winter!  So as the snow fell, I watched my all time FAVORITE Christmas movie -- White Christmas.  I have the ENTIRE movie memorized and even know random facts like the girl (Vera Ellen) who plays Judy struggled with anorexia and she always wears a turtle neck in the movie to hide her neck.  So I should say, I didn't really watch the movie, more like listened to and sang along as I put plastic up on the windows (which honestly probably does nothing for our house since there's no insulation in the walls). 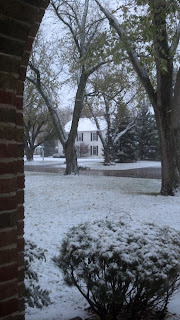 (This was taking around 8:30 in the morning.  At first it was just a light snow with some rain mixed in.) 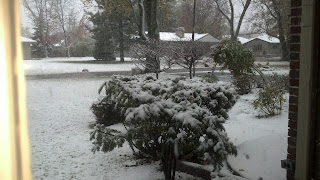 (About an hour later the flakes were becoming bigger and everything was getting a nice covering of snow.  It was hard to try to take a picture of the actual flakes, so you will just have to take my word that they were big and beautiful!) 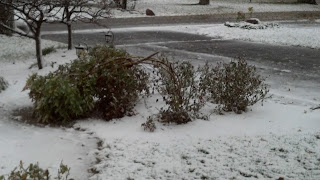 (We had one little fatality -- the tree in the middle of the rose bushes bit the dust.  In the previous picture, you can see it leaning a lot, and finally it snapped -- I heard it from inside!  This tree has always struggled with staying upright in the wind.  We had just finished staking it 2 days before it snapped.  Oh well --- 2 little shoots are intact.  We'll see how it fares through the winter and decide what to do next spring.)