A Visit with Gabbie

A week ago today, I picked up a cute little hitchhiker.  Don't worry, it wasn't a random person, it was just Gabbie!  She has called several times in the past month or so asking to come visit, but it hadn't worked out.  Last week when she called, I didn't have a good reason to delay any longer.  I met her and her mom at our usual midpoint stop - a Subway/gas station in a tiny town in Indiana.  After hanging out and eating lunch (which was way too long for Gabbie because she was afraid we'd change our minds and she'd go back home with her mom) we headed back to my house.

While she was here we played dolls, played tag outside, blew bubbles, visited the neighbor (and their cat!), went to a park and played on the playground, played board games, watched movies, and even went garage saling with friends. 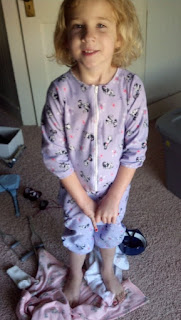 (Gabbie explained to me that these were new pajamas.  They looked a little small and after asking her mother, discovered they are her favorite and she had a melt down over putting them away for good.  On the first night, we attempted to sleep on an air mattress in my bedroom (Steve sleeping on our bed).  However, after only being a sleep an hour or so, our mattress was deflating and I called it quits.  We packed up all her toys and headed to the guest bed.  I was afraid that she would be too awake from the move to fall back asleep, but she didn't have any issue! Needless to say, the next night we just slept in the guest bed - ha!) 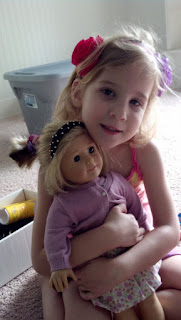 (Playing dolls - Instead of pulling all the doll stuff downstairs, we played all the way up in the attic.  With the windows open, it made for a great playing space!  Notice how Gabbie's doll has a headband, and Gabbie is wearing 2 headbands!  This girl loves headbands!  Whenever she visits, she raids my stash and wears a different one every day.) 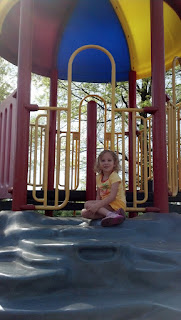 (There's a park that is nearby our house, and I took her there before but we went to the wrong area and only found a slide.  This time, I did a little more research and knew exactly where to go.  We found this massive playground with 9 slides, all sorts of climbing areas, and swings.  This girl played and ran around for almost 2 hours! We went mid morning and there were only a few kids that trickled in and out.  We left around lunch time, and the place was getting packed.  She had a blast!) 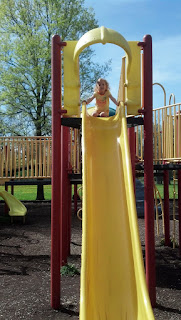 (There were 2 slides that she really liked, this tall one, and then a tube/curly slide.  All of the slides were connected via walkways, stairs, etc. She would run all around the whole structure before picking which slide was next.  It was sort of a U shape, so I just sort of walked around the U to follow her.) 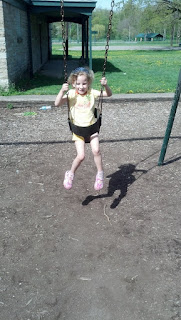 (Playing on the swingset!  This child loves the baby swings and sadly fits into them better than the regular seat- haha! 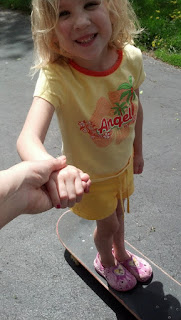 (Later in the afternoon, while waiting to go see the neighbor's cat, we played outside in the yard.  First we blew some bubbles, then played some tag.  We then were looking for a shovel in the garage when Gabbie found Steve's skateboard.  This daredevil couldn't get on it fast enough.  I let her play with it - on one condition - she had to hold my hand while standing on it!  This child needs a helmet just in normal life let alone on a slim board with wheels.  She road up and down the driveway several times and couldn't wait to tell Steve about it later!) 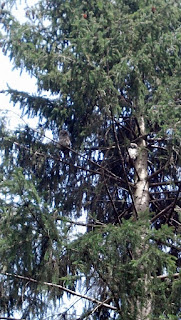 (While outside, we also happened to see not 1, but 2 owls!  They're hard to see, but both are mid picture.  1 is right by the trunk, the other is on the branch to its left.  We watched them fly across to another tree and hang out.  We even found them again later when Steve was home.  We've decided Gabbie is good luck charm with the owls because she was with us when we spotted one for the first time!)

Gabbie headed home on Saturday afternoon.  But that morning, we got up and headed to a big neighborhood garage sale with friends.  Gabbie was super good while we drug her all over.  We found some random High school Musical stuff for her and sisters and she even got to pick out a special stuffed bear.  But the BEST find of the day, was a dinosaur themed nursery set!  Even though we don't know what we're having yet, it was too good of a deal to pass up!  We got 4 stuffed animals, hanging mobile, picture frame, bumper pad, crib sheet, crib skirt, pillow, and a hanging quilt for $40!  The set was in great condition, the animals didn't look touched, and the picture frame was still in its package. After doing research later, we figured out that set brand new would cost $225+!  We figured even if it's a girl, we could girly the set up, or pack it away for the next baby. 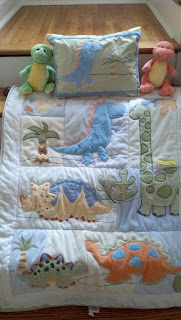 (A couple of the animals, pillow, and decorative quilt)

Only downside, when we got home, I discovered the stuff was full of animal hair.  I washed everything, and spent over an hour with a lint roller de-hairing it.  If Bean is a boy, I'll probably do that whole process all over again just to make sure it's all gone; otherwise, it'll go into storage and taking care of later.
Posted by Unknown at 12:01 PM