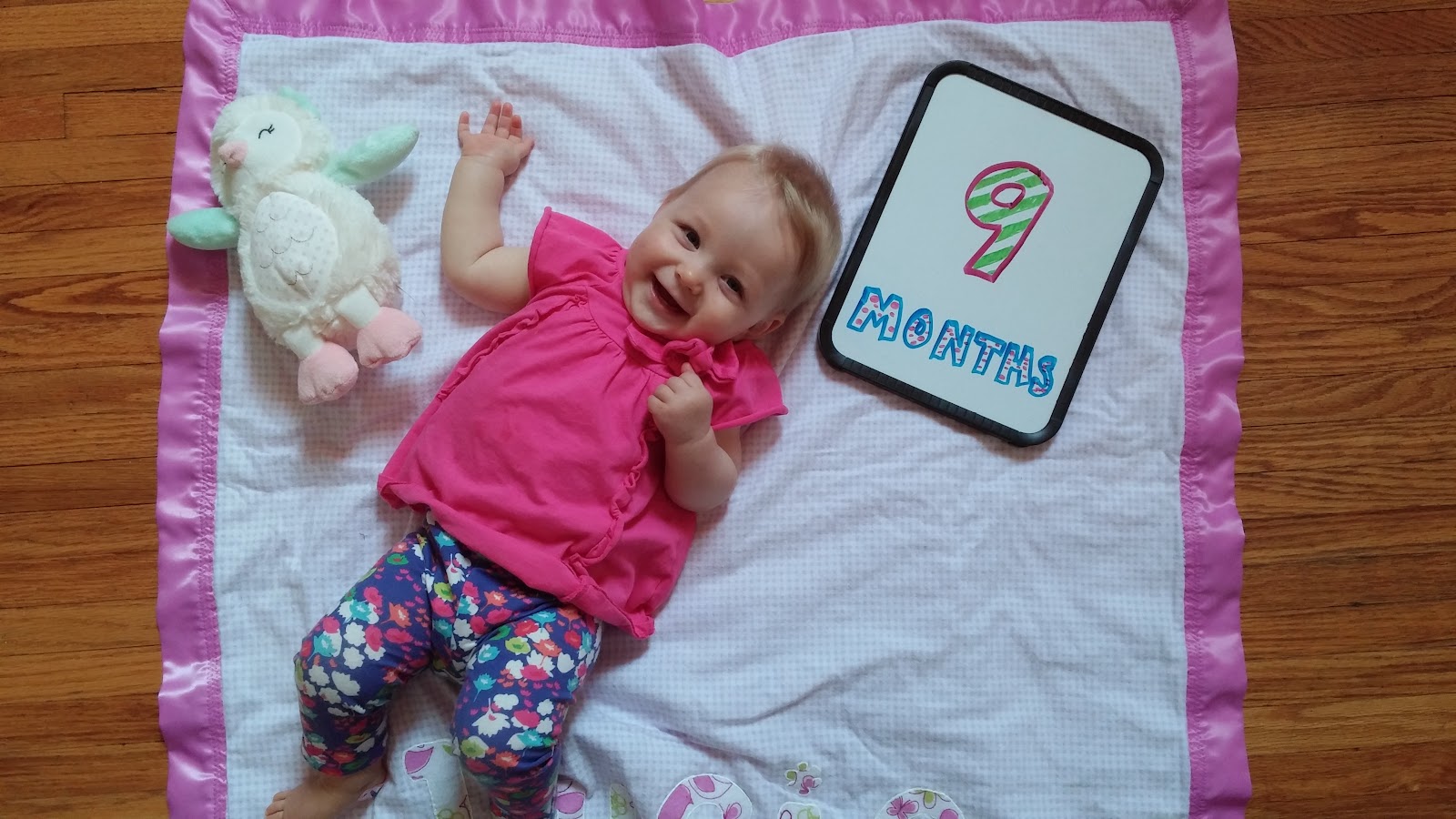 Our little (or should I say big?) Bean is 9 months old weighing in at just a little over 17.5 lbs (25th percentile) and just over 27" in length (just under 75th percentile)!  It seems like yet again she has changed and grown up so much in the last month.  I'm constantly in awe as I watch her play and just see her developing into this sweet independent little person.

She now spends a lot of her time playing and learning new things.  She has a basket of toys in the living room that she constantly dumps out, goes through, and moves the toys around.  A couple times a day, I pick up all the toys and put them back int he basket, just for her to dump again later.  She has also discovered that she can open up the bottom drawer of our cabinet with dvds inside.  She'll take them out one by one and drop them all around the floor.  I am constantly putting them back in the drawer, just so she can take them back out (and note, I keep the dvds alphabetized and still put them back in proper order.  Someday i'll crack over the process and just throw them back in.)  Another favorite past time is taking all the diapers out of the diaper box (which I constantly put back in).  Just before nap times, our living room looks like a war zone with diapers, toys, and dvds.

Nap times are my favorite times of days because it is a time of recharging for both Bean and myself. When I'm smart, I take advantage of the time and clean up the house - do the dishes, do a load or two of laundry, vacuum/mop (it's amazing how a crawling baby's clothes teaches you how quickly floors get dirty!), work on my latest craft project, pick up toys, or even work outside and mow.  When I'm not smart (or shall I use the word more like lazy) I'll lay down and take a nap (or maybe it is smart to sleep when baby sleeps?); or sometimes, I just sit and listen to the quiet house and do nothing (I like to think of this more as a mental nap, ha).

Her schedule is still about the same as last time, just with different activities:

If you didn't notice in her schedule, we are substituting a lot more formula.  Since I've cut back on breastfeeding when introducing food, my supply went down.  I just recently realized that with my supply going down, she still needs milk; thus, the supplementing with formula.  About a couple weeks ago, we first just started giving her formula before bed.  It definitely helps her sleep better.  I hadn't pumped in a very long time, so that's when I realized my supply was way down.  I thought she was fine with just loading her up with more baby food, but discovered at her recent doctor's appointment, that's not he case.  Haha, sorry little girl you've been a little milk deprived which is why she's dropped a percentile; but don't worry, we are back on track now!

Her sleeping has finally turned a corner.  We haven't figured out the exact winning combination, but we are definitely moving in the right direction.  The first improvement was giving her 6 oz of formula (versus the 2-3 oz of breastmilk she was getting).  Formula lasts in the tummy longer, which I think has helped her sleep better.  Another thing that has really helped is the addition of a camera in her room.  It didn't really change anything, other than allowing me to check in on her while she's crying and giving me peace of mind that she's ok.  If she's still laying while crying, I'll let her cry it out and typically she's back asleep within 5 minutes.  If she's up pulling on the crib, I'll go in, feed her, and she'll go back to sleep.  We are down to only 1 feeding at night (and I won't feed her before 4am).  There are some nights where she'll cry out 2-3 times throughout the night, but those are definitely fewer than they had been.  Our current normal is her getting up only once between 4-5am.  I'll take it!

She's become really mobile and has definitely mastered crawling (or technically 'creeping' since it's on her hands and knees, but who is getting technical?).  It seemed to happen overnight her ability to just pull and drag herself around to actually zooming on hands and knees.  She's even started to pull up on things (like the coffee table, couch, and daddy's Ikea chair) which has resulted in some bruises.  Although, she's a pretty tough kid and doesn't cry at every spill.  With this new mobility, we've had to make some changes to her play space in the living room.  A lot of times have gotten the boot (like a plant on the floor that she loved to tear off and put in her mouth and magazines from the bottom of the coffee table).  Some things have been duct taped to avoid being hazardous (like a random face plate hiding a hole in the wall - the screws are loose and kept falling off.  So now it is duct taped to the wall and no worries about loose screws!).  The biggest change arrived a couple weeks ago -- a baby gate!  We got a "play yard" which allows you to form a series of gates into different shapes to fit specific spaces (or to just create a circle).  We've positioned it to pin off a location between the couch and fireplace.

We were going to just use the baby gate to separate the living room from the foyer, but discovered a non-conspicuous hazard behind our couch -- an old trunk from WWII era.  One day while playing behind the couch, I saw her grab at some loose leather pieces on it (that used to be a strap).  I swatted her away from it, but didn't realize she had some in her hand.  I quickly learned she'd gotten a piece by the choking/gagging sound that ensued.  I quickly dug the leather out, but she did swallow some small flecks.  I called poison control (just to be safe) and learned that I should be more concerned about her exposure to the paint on the trunk (which is most likely lead based) -good to know!

Bean is eating just about anything and everything (don't worry, I've stopped the leather consumption).  Her favorite food is definitely bananas.  She will eat either the baby food version (or any combination like banana/berry) or a plain banana cut into chunks.  I've tried to give her blueberries, but she thought they were too sour by all the faces she was making.  She's really gotten into feeding herself and loves things like macaroni and cheese, stuffing, cottage cheese, rice, puffs, pieces of bread, etc.  Feeding her has gotten much easier since she now eats "people food".  We typically always have some sort of a leftover in the fridge that she can eat.

Sometime in the past few weeks, she has seemed to have grown out of a lot of her clothes.  The weather has been cooler, so she's been in more onesies and pants.  Now that it has warmed up, I went to put her in a summer outfit that she wore last month, and it barely fit. She can still do a few size 6-9 months.  But is more comfortable in 9months or 12months sizes.  Sometime this month she graduated into size 3 diapers, but I definitely don't remember when that happened! She's drooling like crazy and constantly wearing a big; however, she still just has 2 little teeth on the bottom. 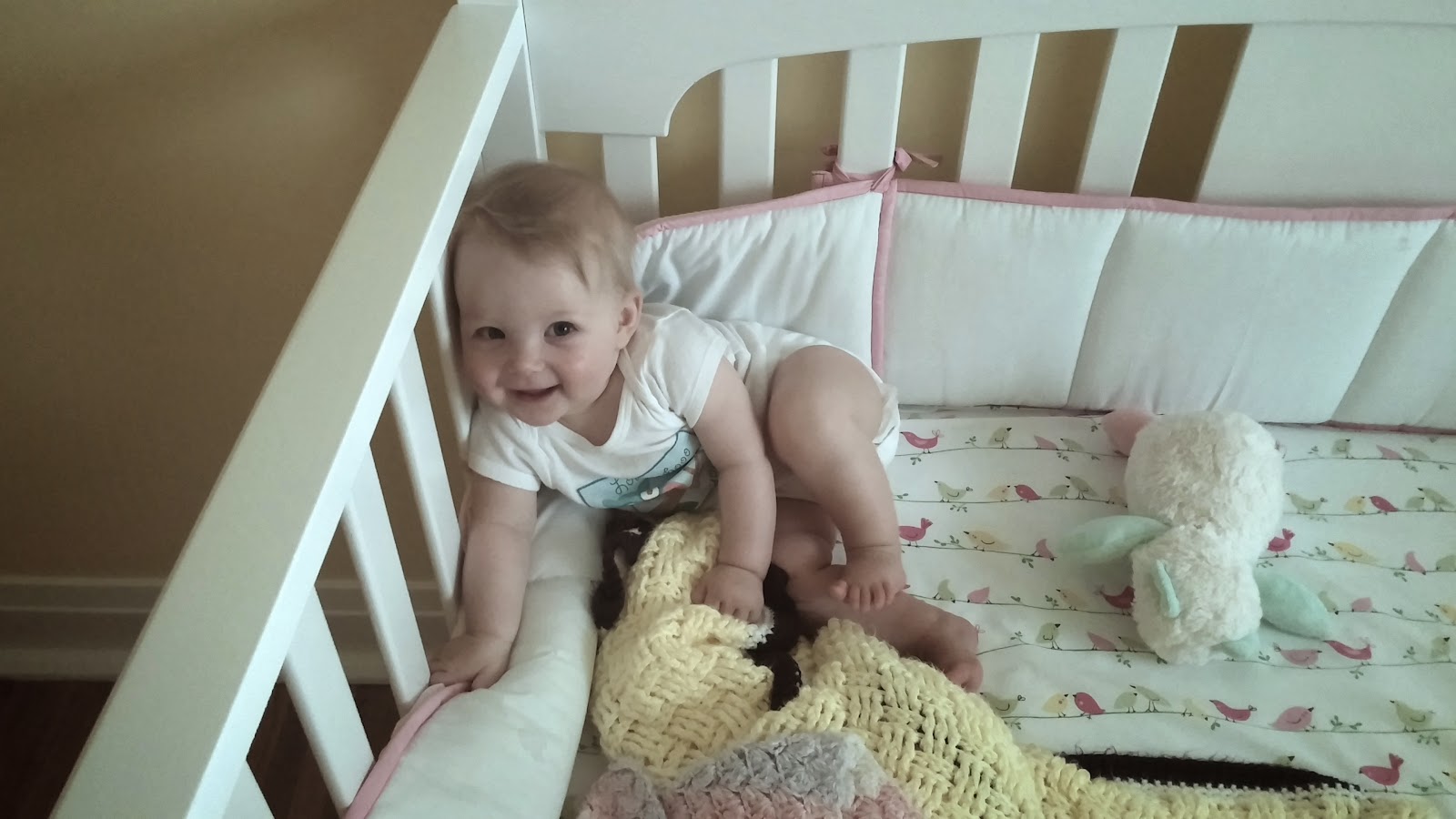 (This girl is so happy after her naps! Sometimes she'll just play in the crib for a little bit before I go and get her.) 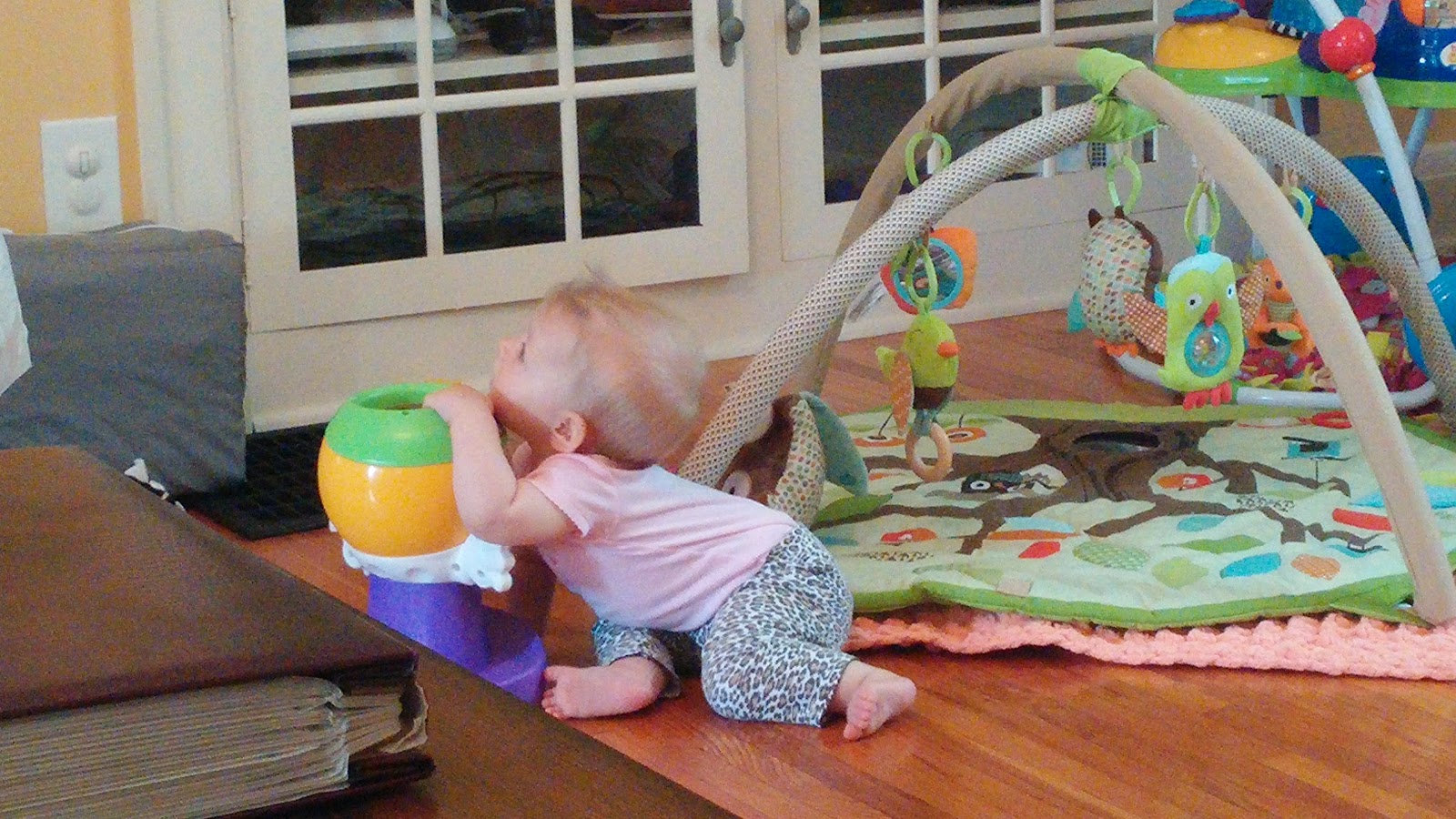 (Bean typically ignores the tv when it's on, which I'll admit is most of the time.  But if I put cartoons on for her, or a commercial comes on with music.  She will just stare at the tv.  I also must note that the playmat has been retired- which was hard for me to do!  She still plays with the toys that hung from it, but the arc and mat have been put away.) 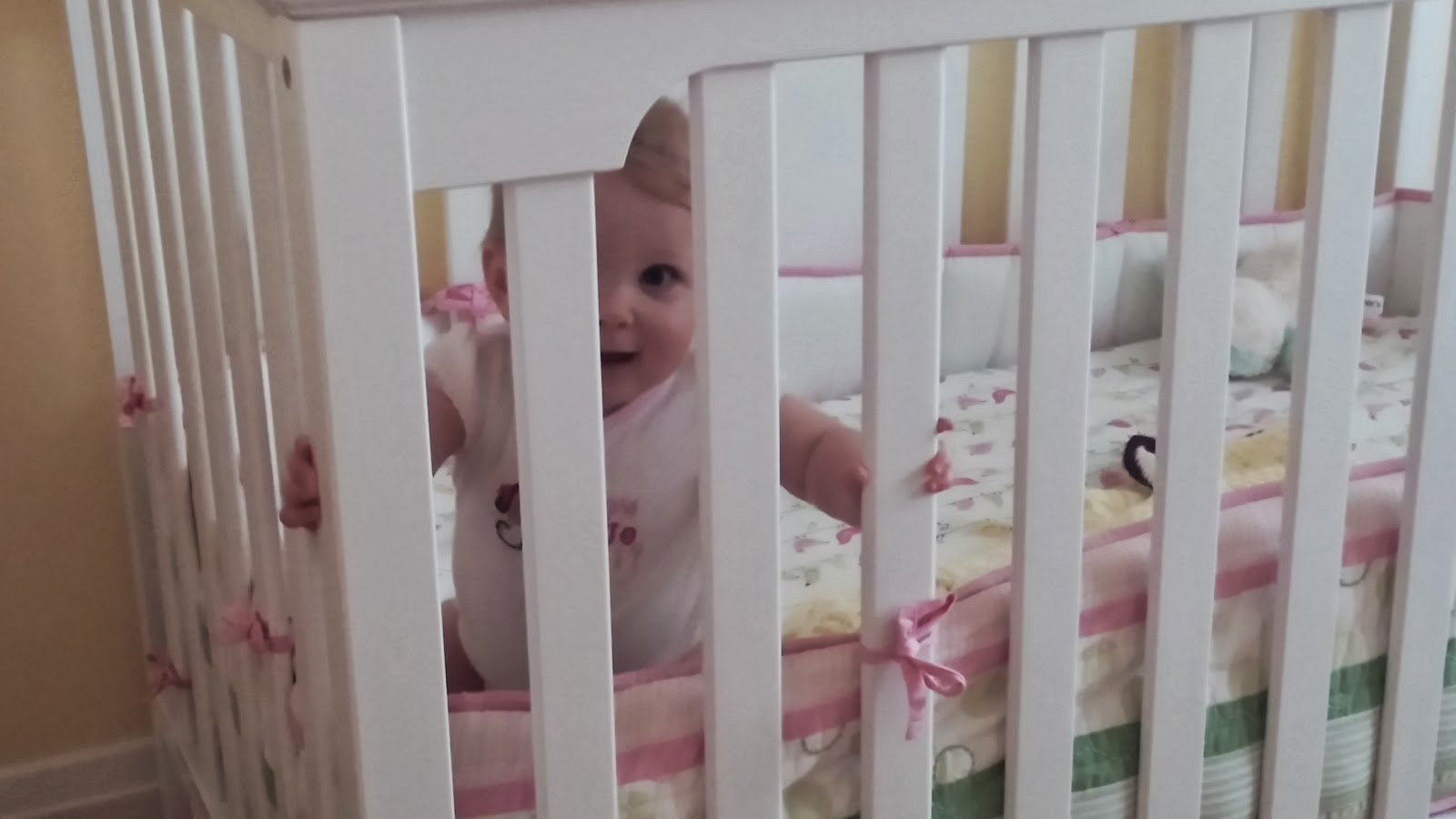 (Another way I find Bean in her crib.  It was rare that this time she was smiling.  Typically she is crying in this position.) 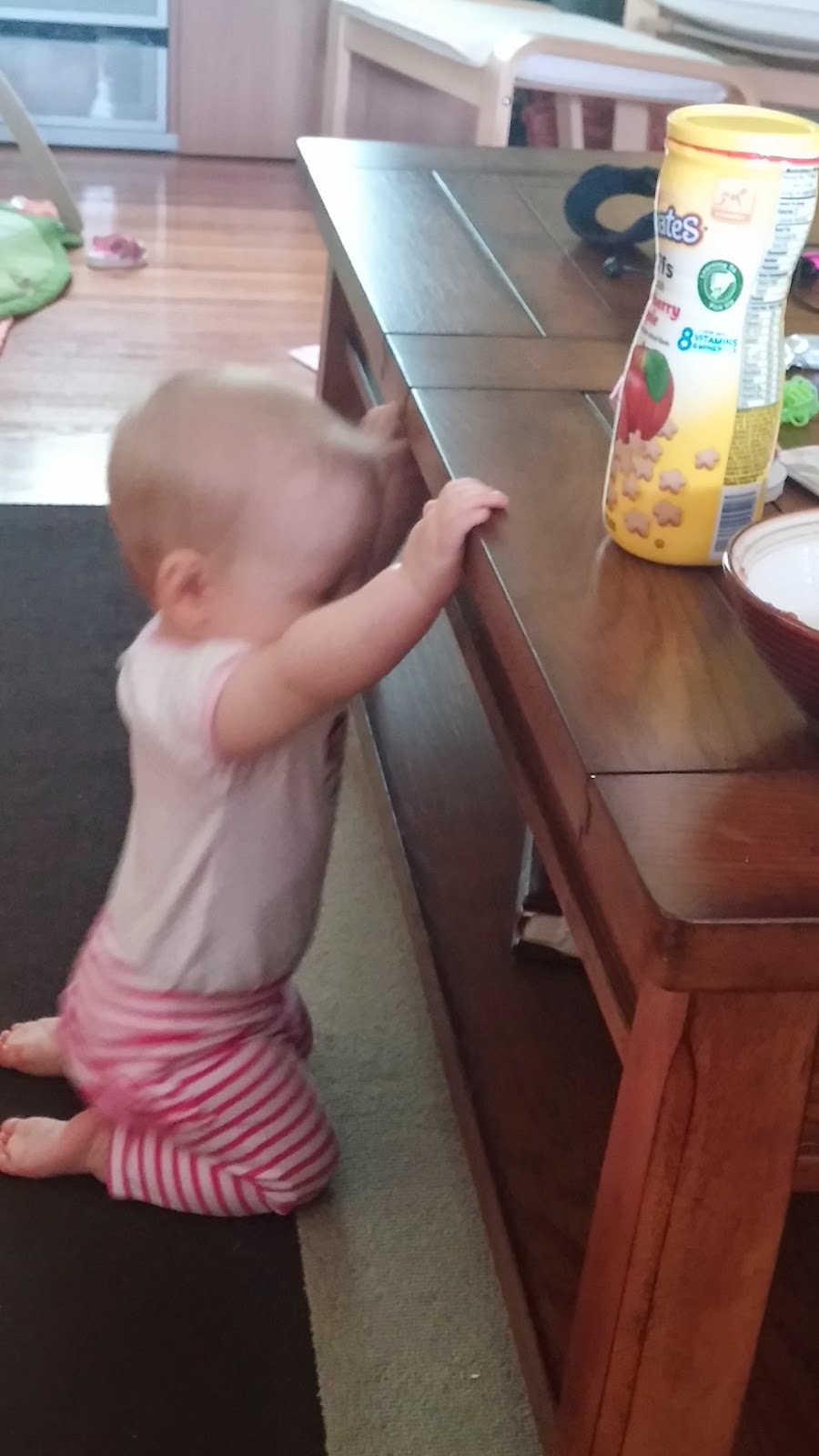 (Notice a common trend in the last two photos?  She's pulling up on everything!) 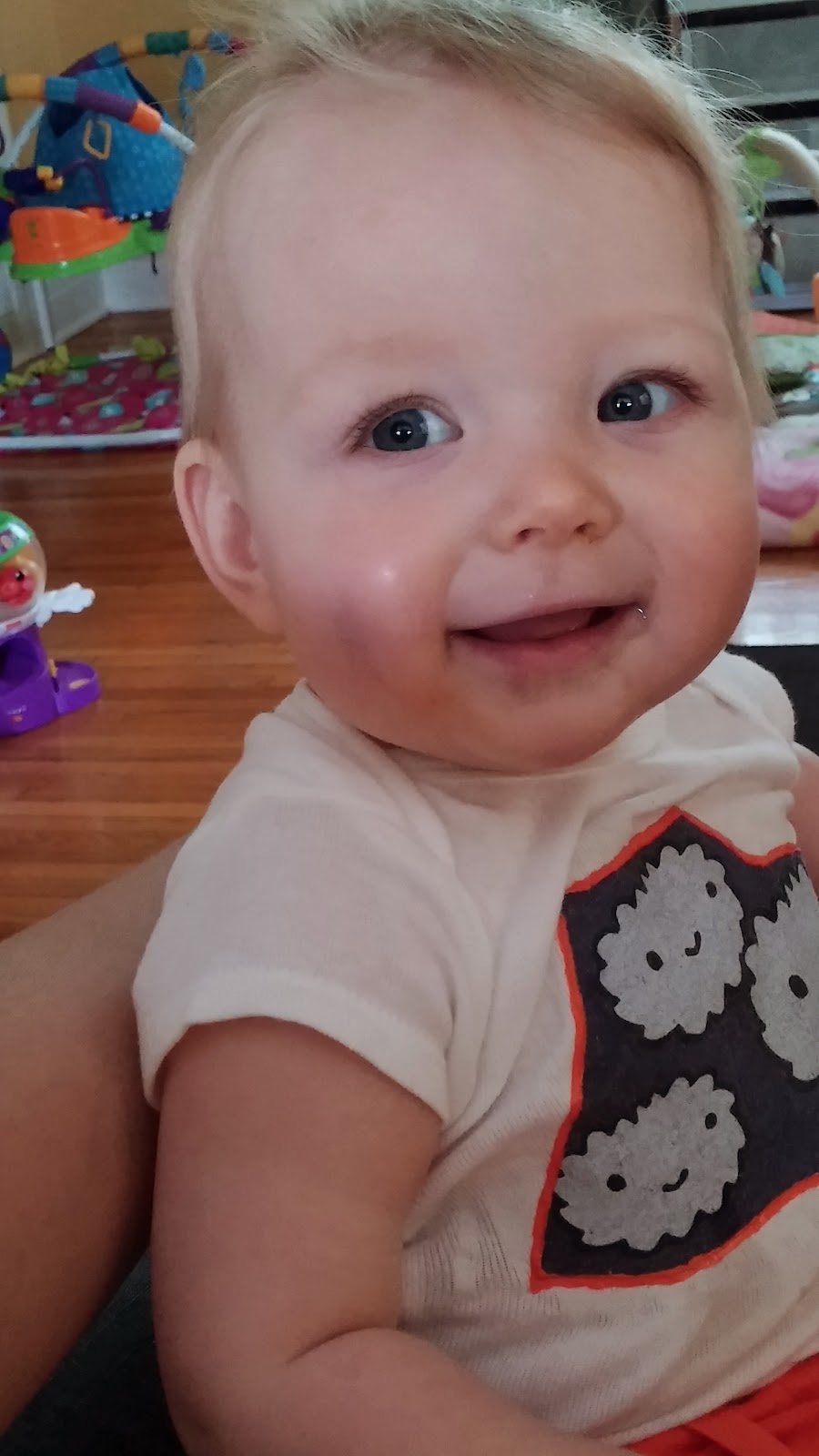 (Showing off her bruise on her right cheek.  She tried to pull up on daddy's chair and lost the battle with the wood frame. She got this lovely bruise right before 4th of July, just in time for everyone to see her and say, "what did mommy and daddy do to you?!") 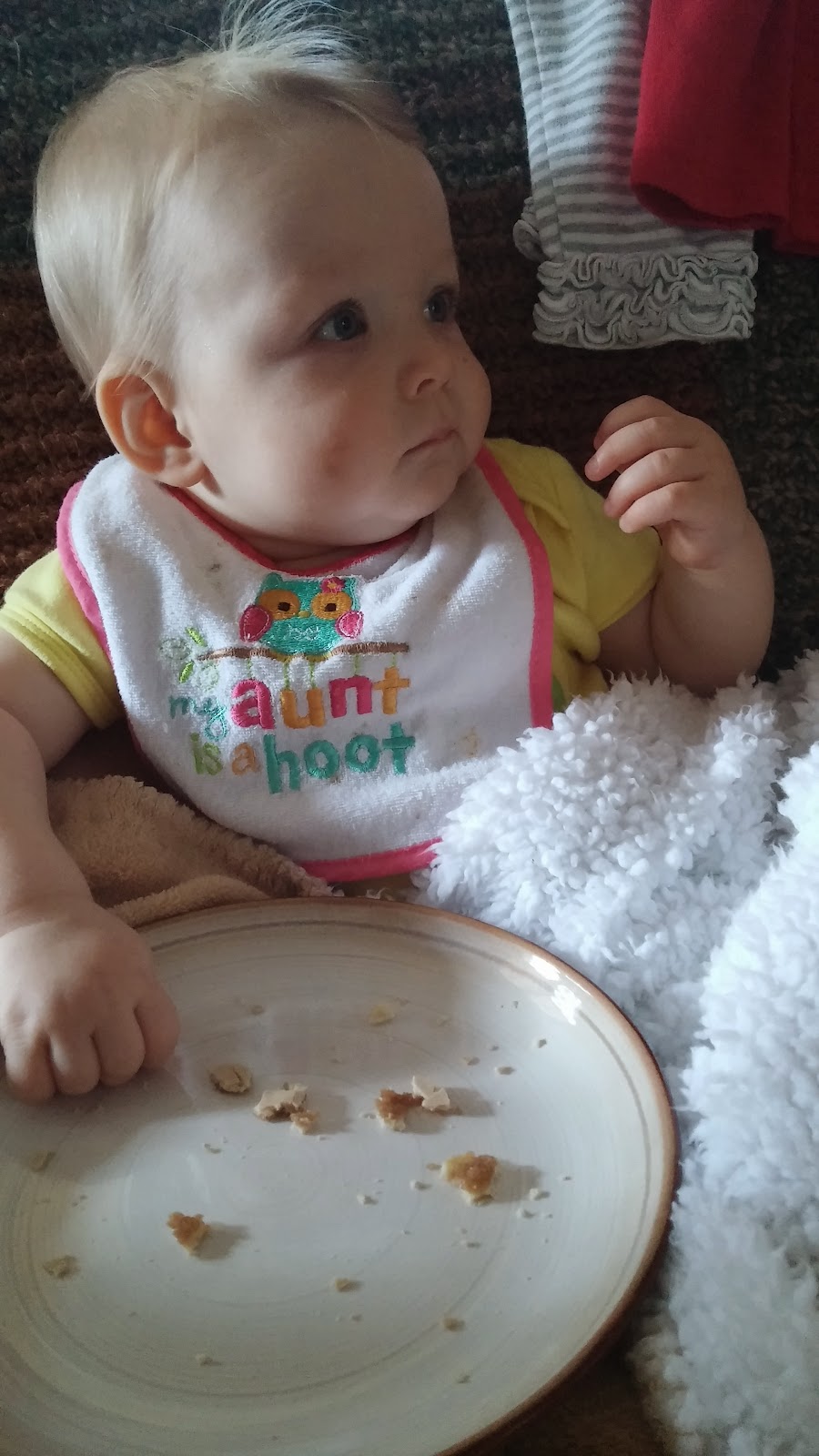 (Did I mention she's eating everything?!  I'm not one who graciously shares food.  Steve has really helped break me of my selfishness with food; and now, I get to share with him AND Bean.  Her cute little inquisitive faces she makes as I'm eating something help me want to share.  Here she's eating some of a poptart.  Only easy thing about sharing this with her is that I gave her the crust pieces!) 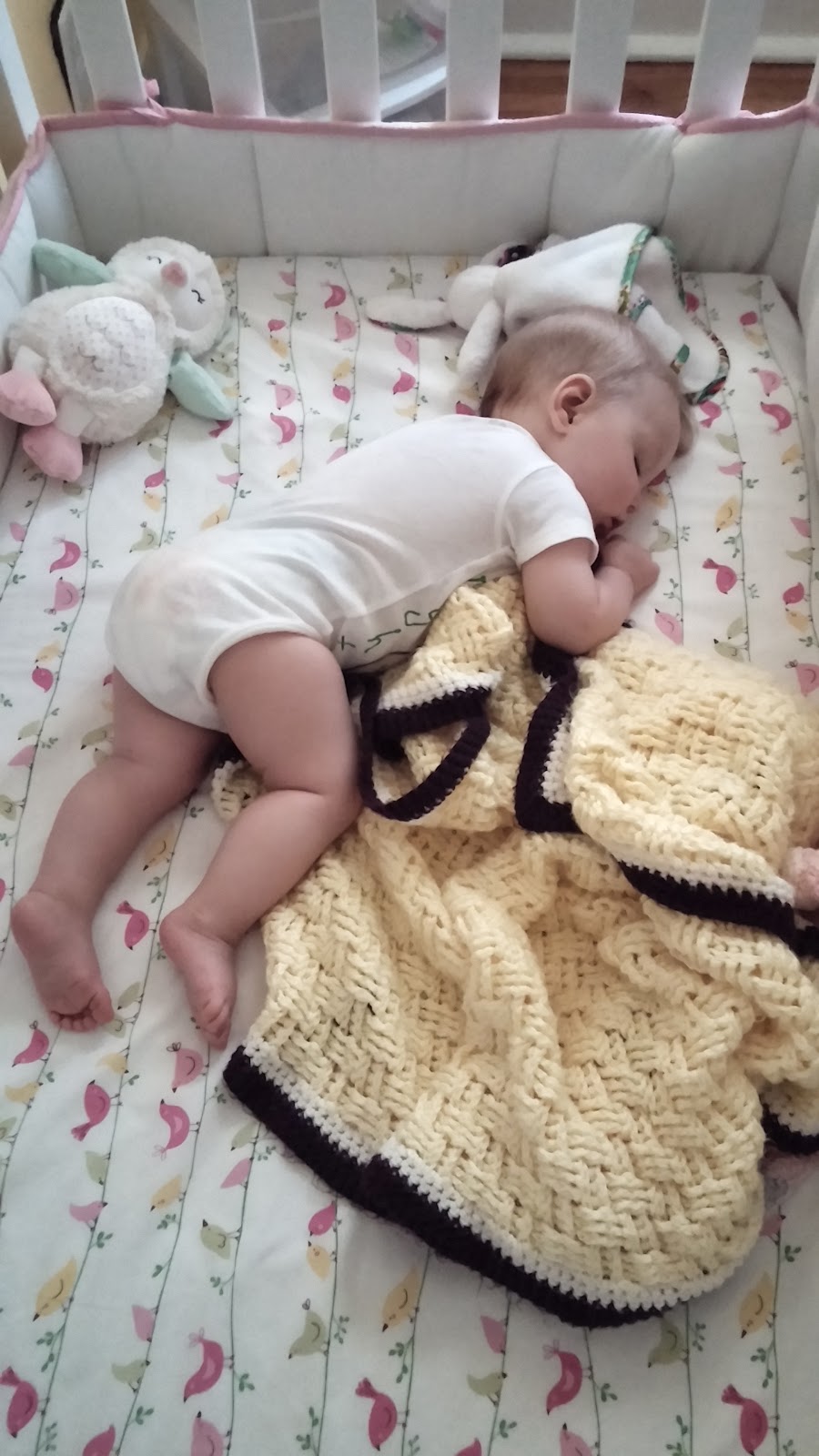 (I've always wondered how Bean sleeps, since she's usually sitting up when I go and get her.  Until our recent addition with the camera, I was left in the dark to only guess that she sleeps on her side or maybe tummy.  One day, I went in to wake her up and found her all huddled in bed on her tummy.  She sleeps just like me!) 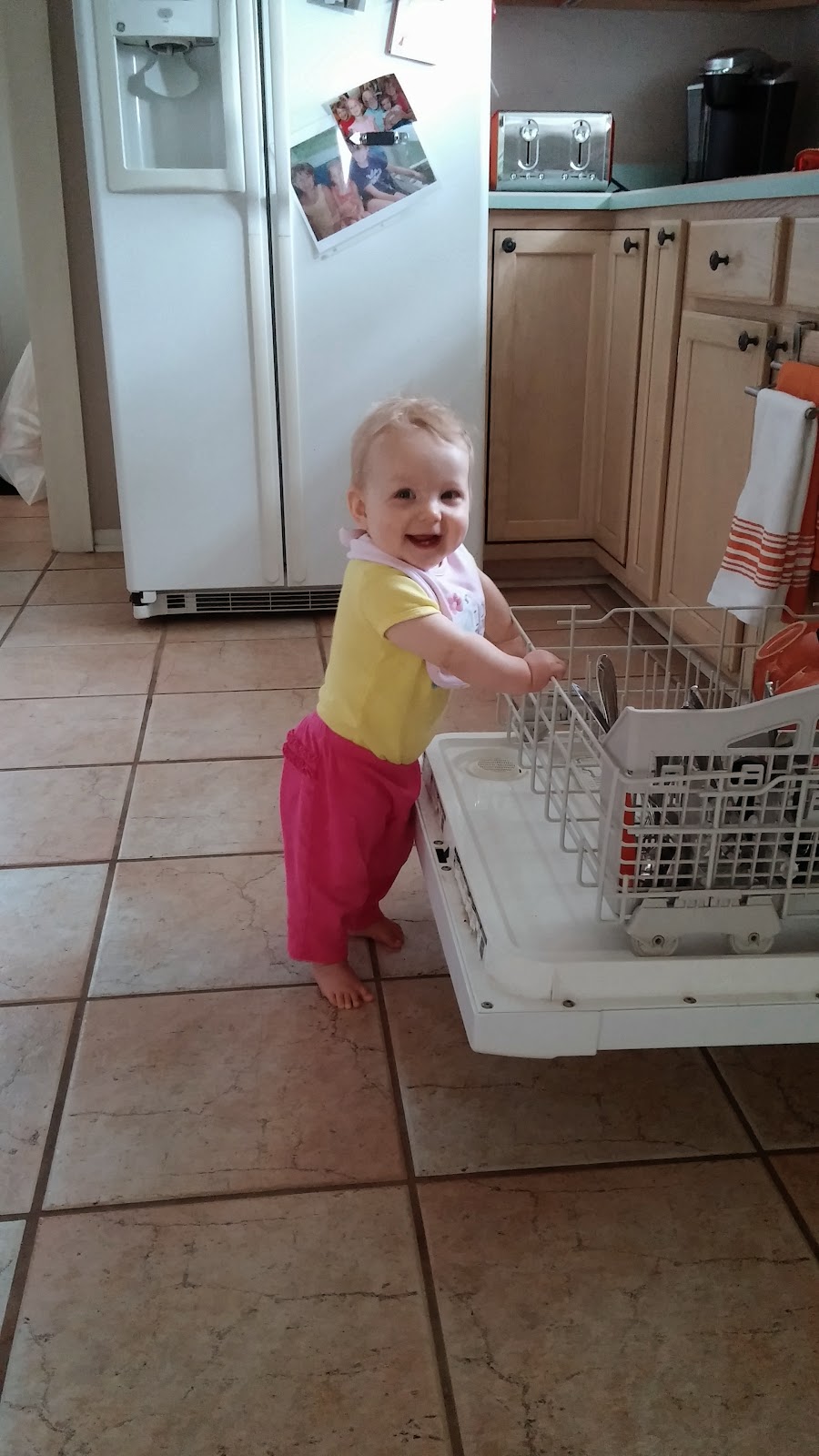 ("Helping" mom with dishes.  Did I also mention she's pulling up on everything?!  While I'm making dinner or doing dishes, she'll typically play on the kitchen floor with a measure spoon.  Now that she's able to pull up, she's found a new game of reaching for items in the dishwasher and pulling silverware out.) 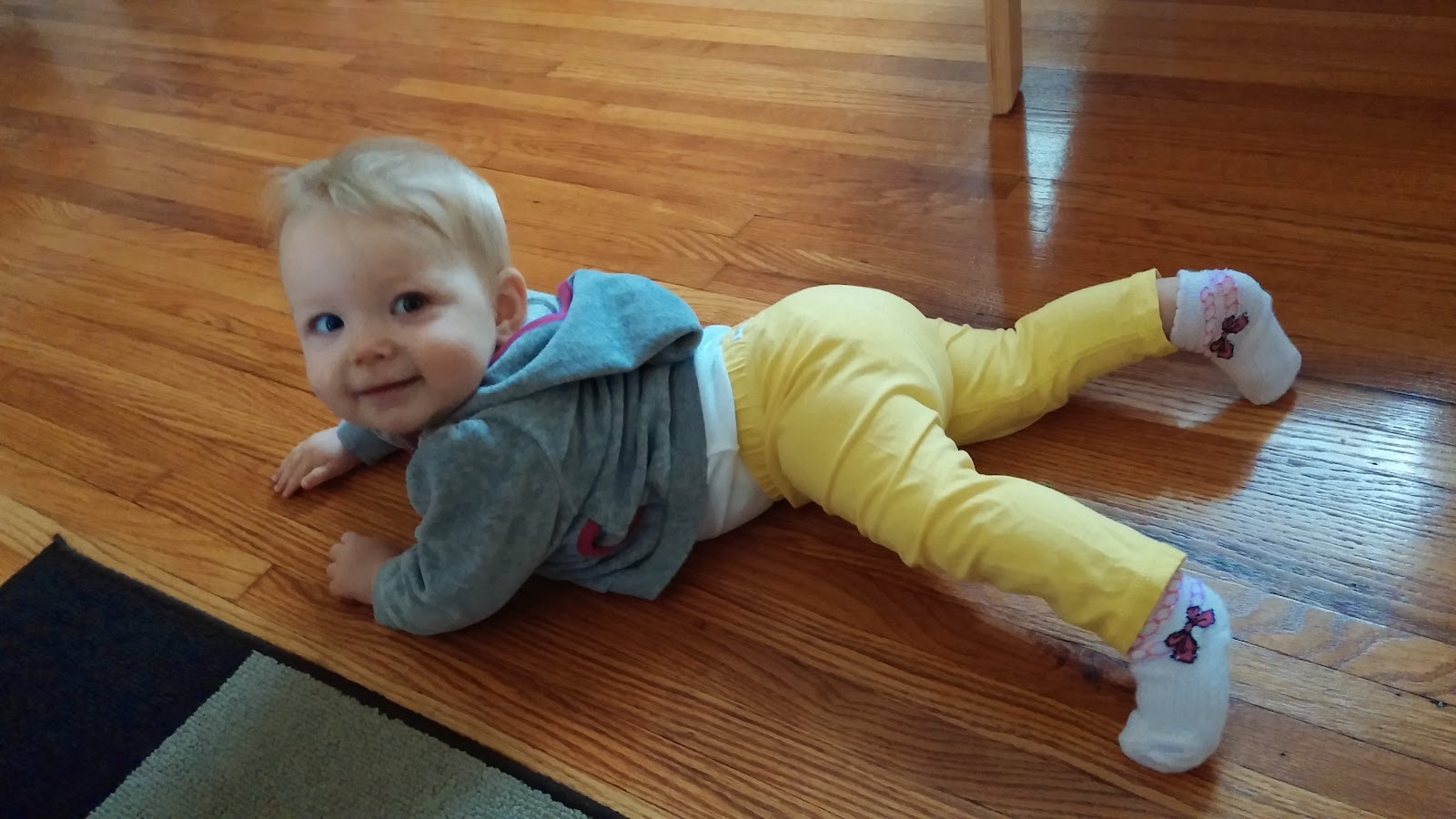 (This picture definitely doesn't look like it was taken in mid July, but it was!  For a few days, we had windows open and sporting sweatshirts, pants, and socks.  We've still been having cool weather and not running the AC, but at least now we're back to wearing tshirts and shorts.) 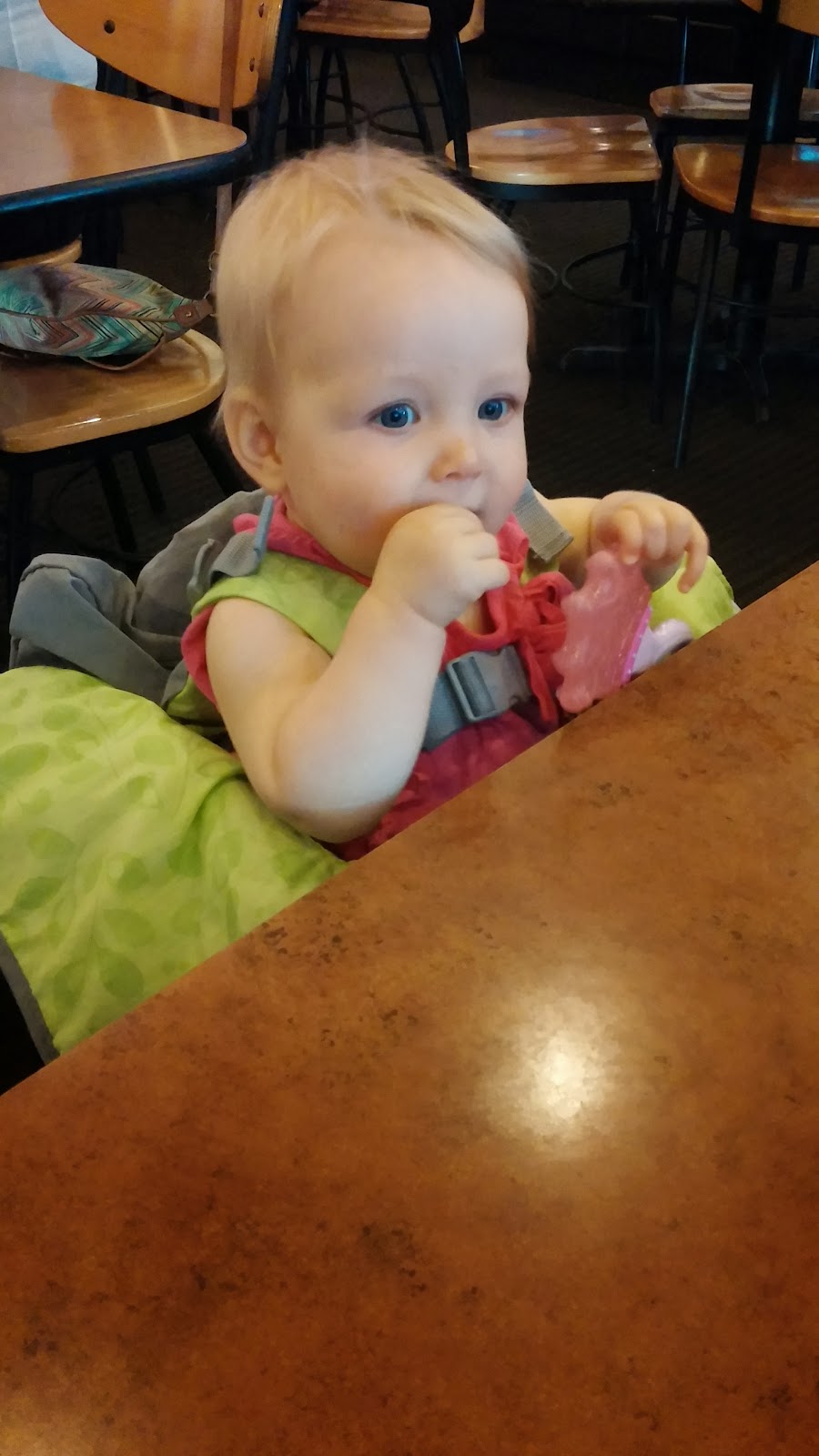 (Big girl now sits in a high chair when we go out to eat!  How in the world did she get this big?!) 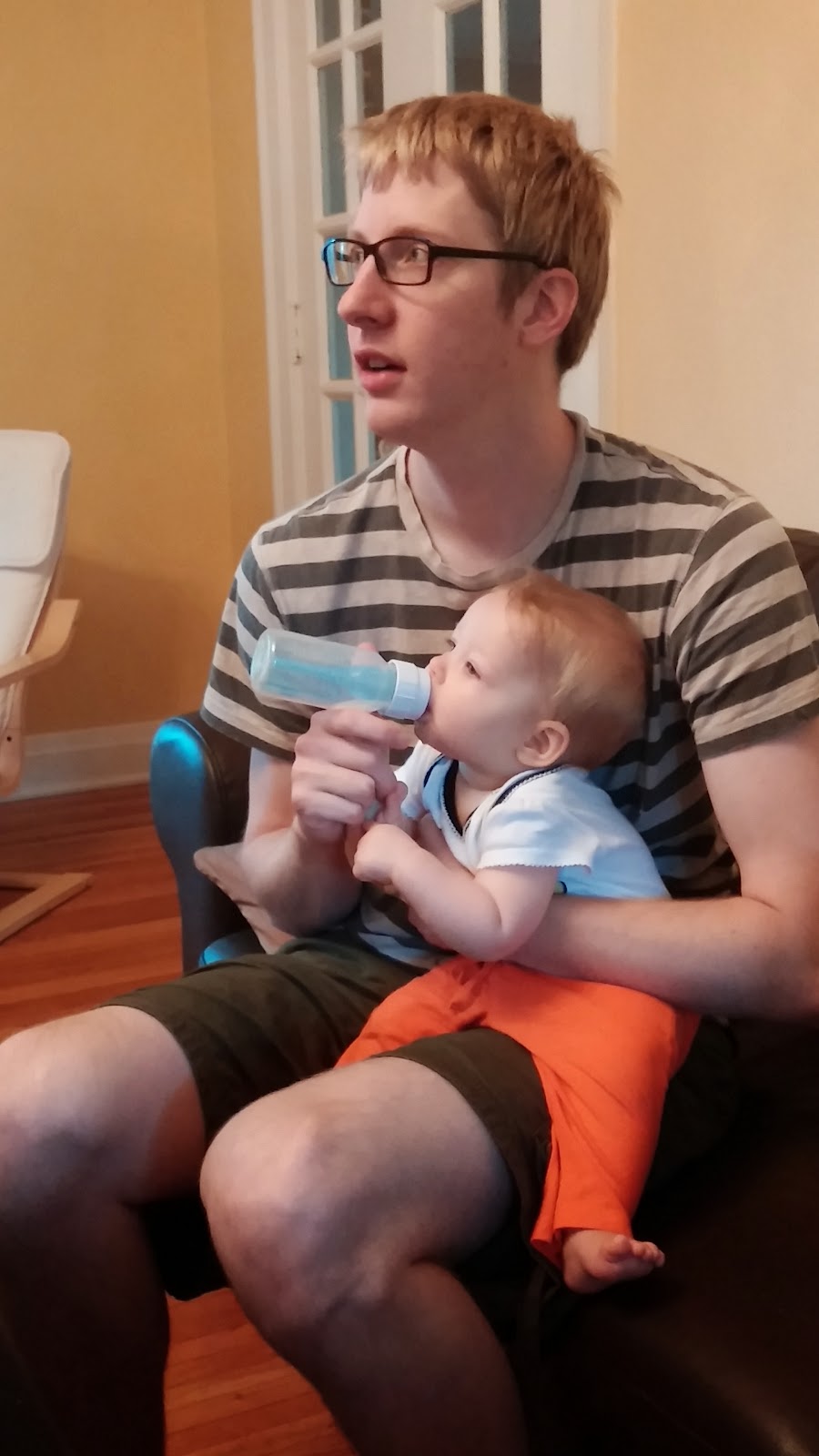 (Everyday I say, "she looks so much like her daddy!"  This picture pretty much secures that statement.  They both even zone out the same!) 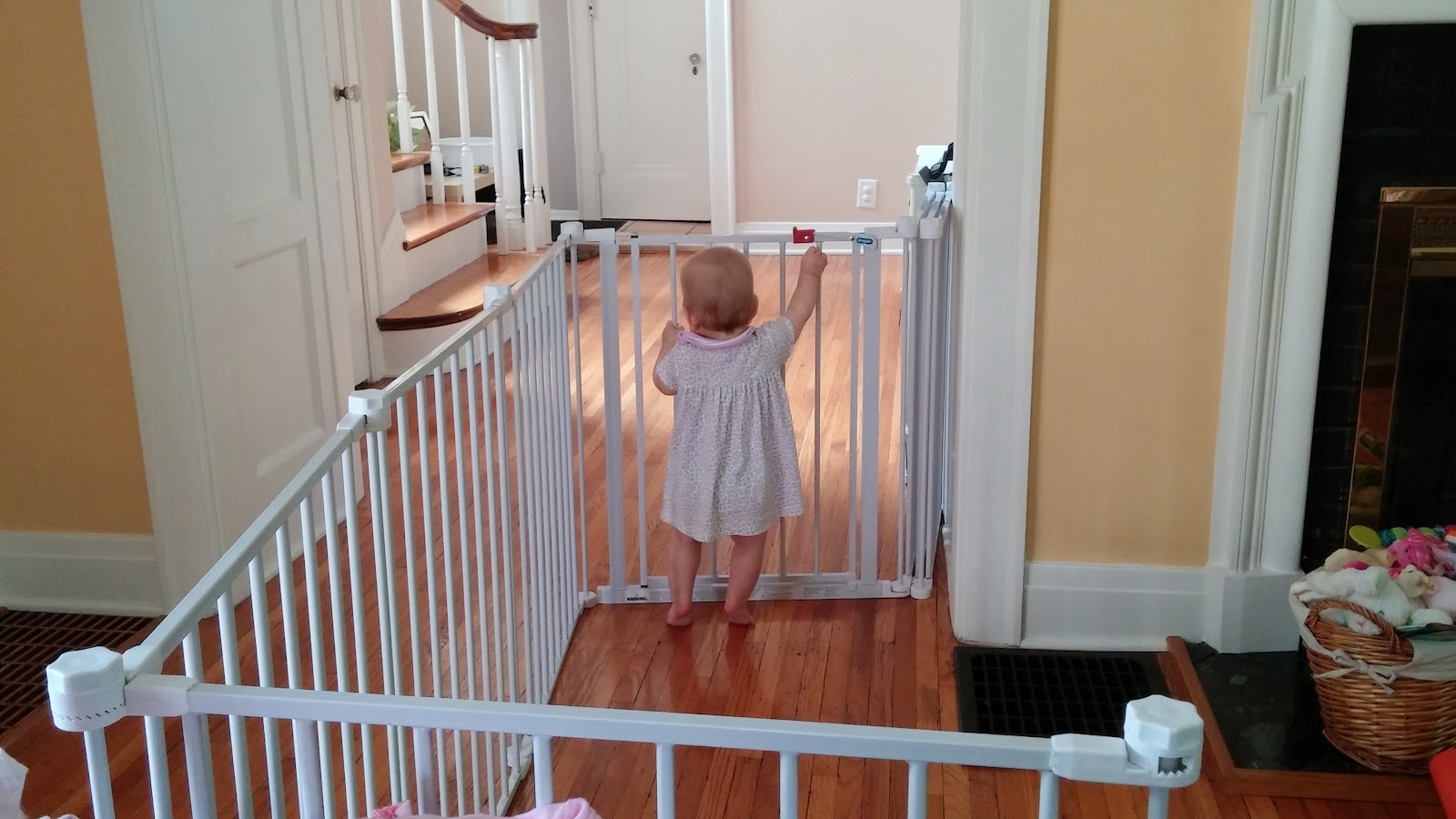 (She typically plays in the living room without even realizing she's gated in.  But today, this happened - she's pulling up onto her tippy toes!  She even "cruised" a little by grabbing the next rung and scooting over.  She'll be walking before we know it!)
Posted by Unknown at 4:47 PM