We got really lucky when we bought our house, in the fact that all the front landscaping and been professionally done.  Unfortunately, not all of it had been kept up.  The first summer we lived here, I spent a lot of my time outside pulling weeds, laying landscape fabric, and putting mulch (purchased in bags from Menards) all around.  Then the next summer, I spent zero time on the landscaping since I was pregnant and had other things to accomplish.  This summer, we kicked it into high gear and both of us spent a lot of time outside working!

We had a goal to fix all the landscaping just in the front of the house.  For a couple weeks, I would spend a couple hours each day outside working on pulling up the landscaping fabric I laid a few summers ago (weeds were poking through and we deemed it a lost cause), pulling weeds, and trimming all the bushes.  On the weekends, Steve would work outside with me and he would cut and prep all the edges for the mulch.  We had most of the area ready for mulch by the July 4th weekend.  We took advantage of that 3 day weekend and had a huge truck load of mulch delivered from Resource Recycling the Thursday before (we got a discount for advertising for them on Facebook!).  We were able to spread the mulch quickly in that same evening.  Only, we didn't even make a slight dent in the mulch pile! We quickly changed our goals and busted our butts to get a ton done that weekend!

We ended up getting the entire front landscaping done, as well as the landscaping that rounded around the side of our house.  I'm pretty sure that area hasn't been touched in 5+ years.  Steve cut out about a foot of grass along the edge while I spent my time weeding.  After a section was all weeded and edged, he'd lay Preen down and then mulch.  There were a couple of bush/trees that drive Steve crazy.  They were overgrown and hide the house.  He wants to just tear them out, but I compromised with trimming them way down.  This project wasn't even on our to-do list, but after a quick decision and an hour of work.  That area looks tons better!

So what about Bean?  Well, she is an absolute trooper!  She is pretty adaptable to going with the flow.  On the days where I'd work out in the yard during all the prep work, I'd take her jumper outside. She'd play in it for awhile.  Then I'd put her down for a nap and continue working while she slept.  On the weekends when Steve and I were both out in the yard.  I'd work along with him during her naps.  When she was awake, I would have her play on a blanket in the yard for a little bit.  But the blanket play wasn't the best solution.  She liked to pull at the grass and swallow/choke on it. So usually one of us was playing with her while the other was working.  A couple of times while we were outside, the neighbor's grandkids would come and play with her on the blanket.  They all loved it!

So usually I'm fairly good about doing before and after photos, but I didn't get many before photos. 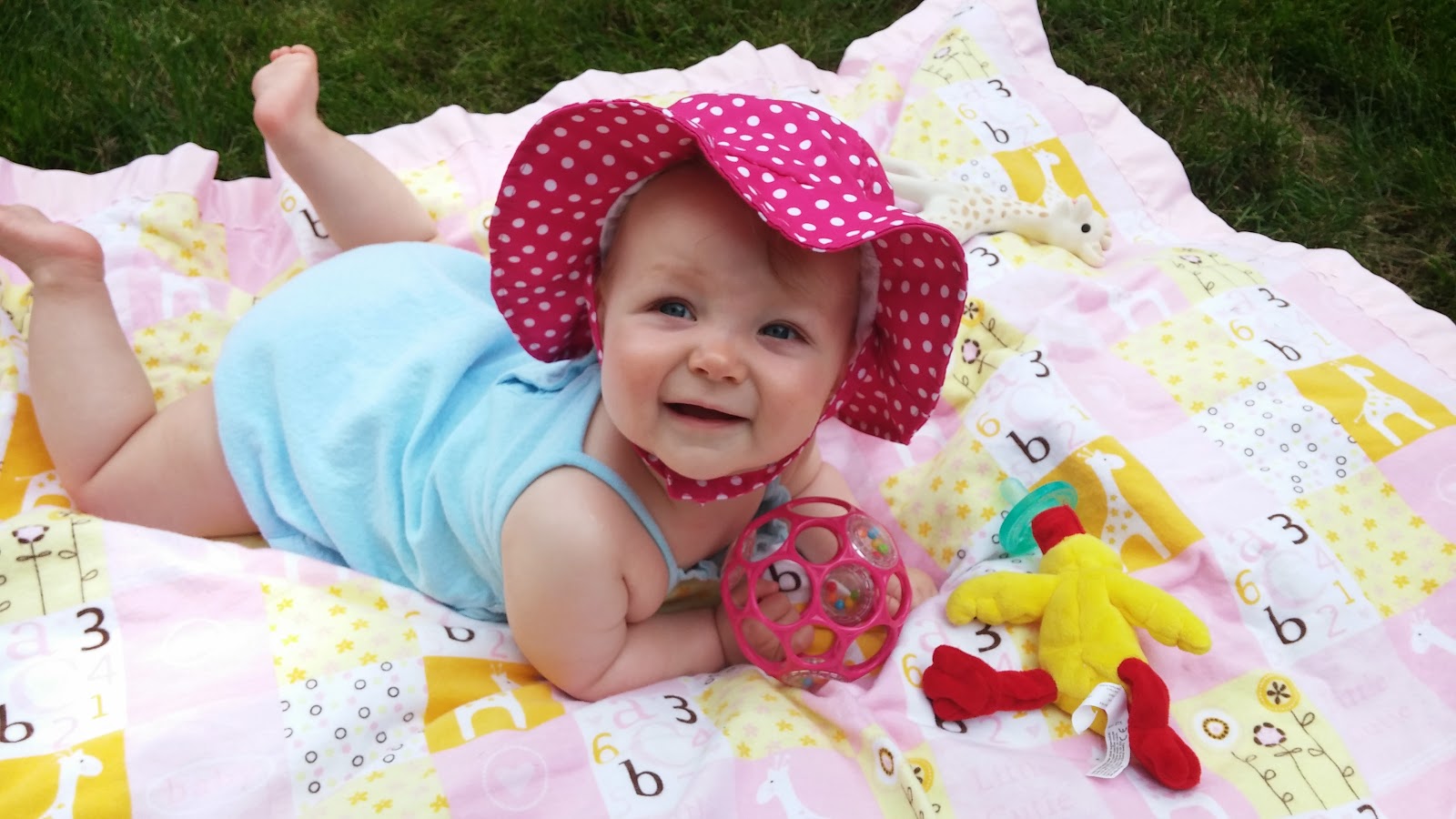 (Bean hanging out on the blanket playing.  The first couple of times we had her outside, she wouldn't go off the blanket.  She didn't like the feel of grass so we didn't have to worry.  But then she got adventurous and would not only go off the blanket, but would eat the grass!  Or at least try.  She had one attempt that resulted in a huge gagging fit that nearly put Steve over the edge.) 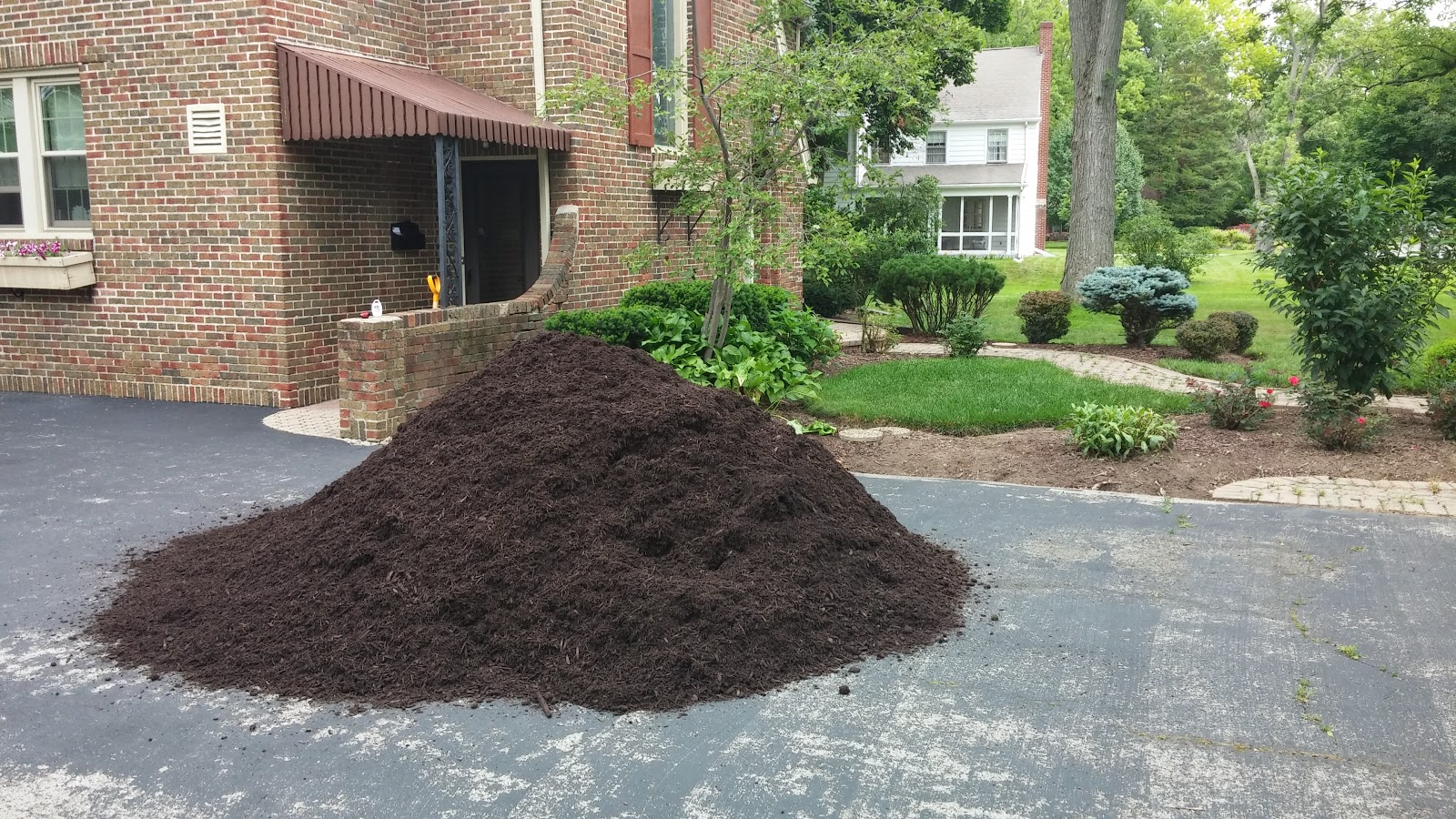 (Before photo of the mulch freshly dumped!) 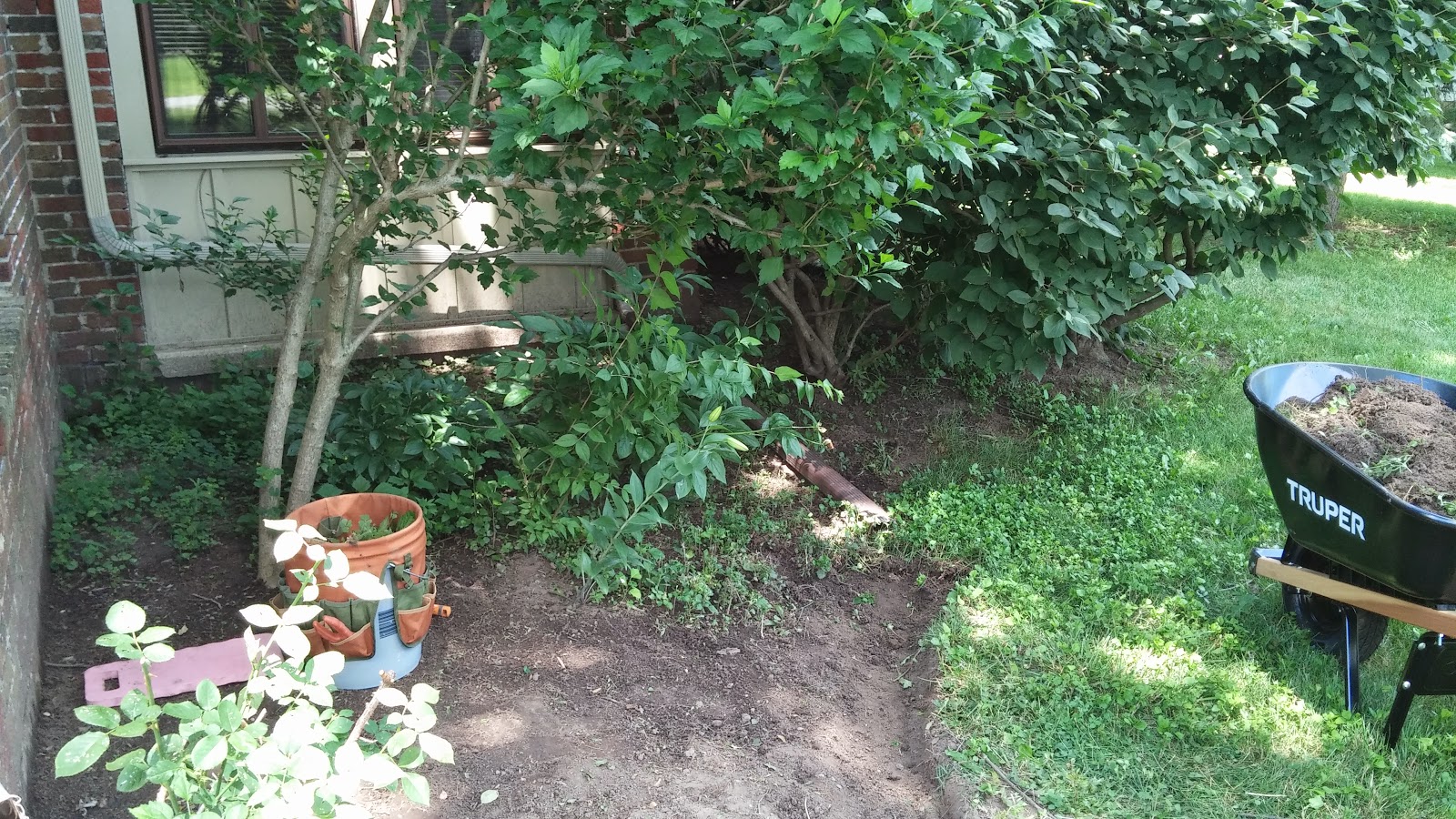 (Here's a good in action shot.  You can see Steve's edging and my weeding!  Notice all the weeds in the back corner?  The entire landscaping from this edge all the way around the house was just covered in hundreds of weeds.) 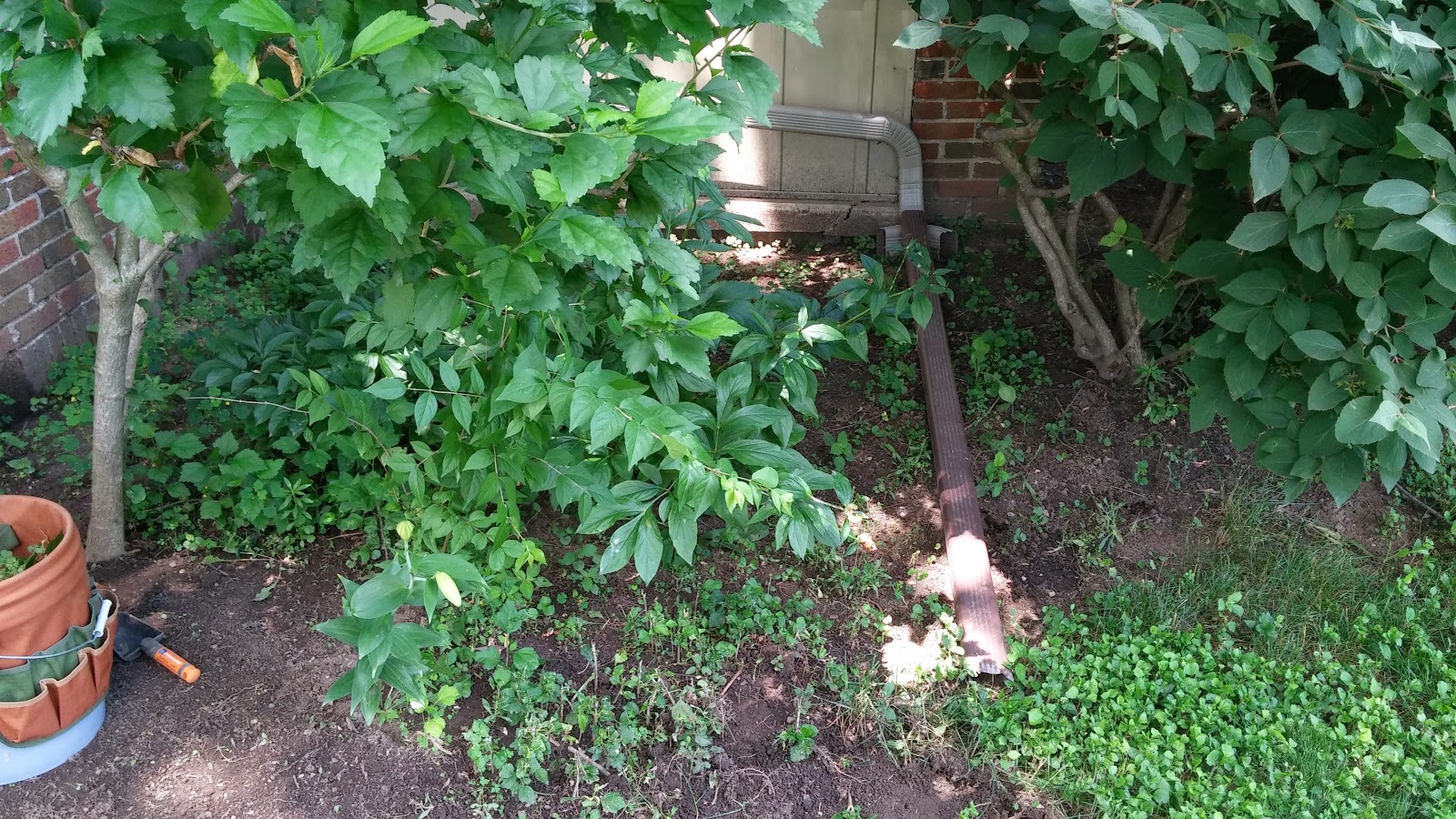 (Close up of the weeds.  We also tore out a bush that wasn't doing much since it didn't get good sunlight.) 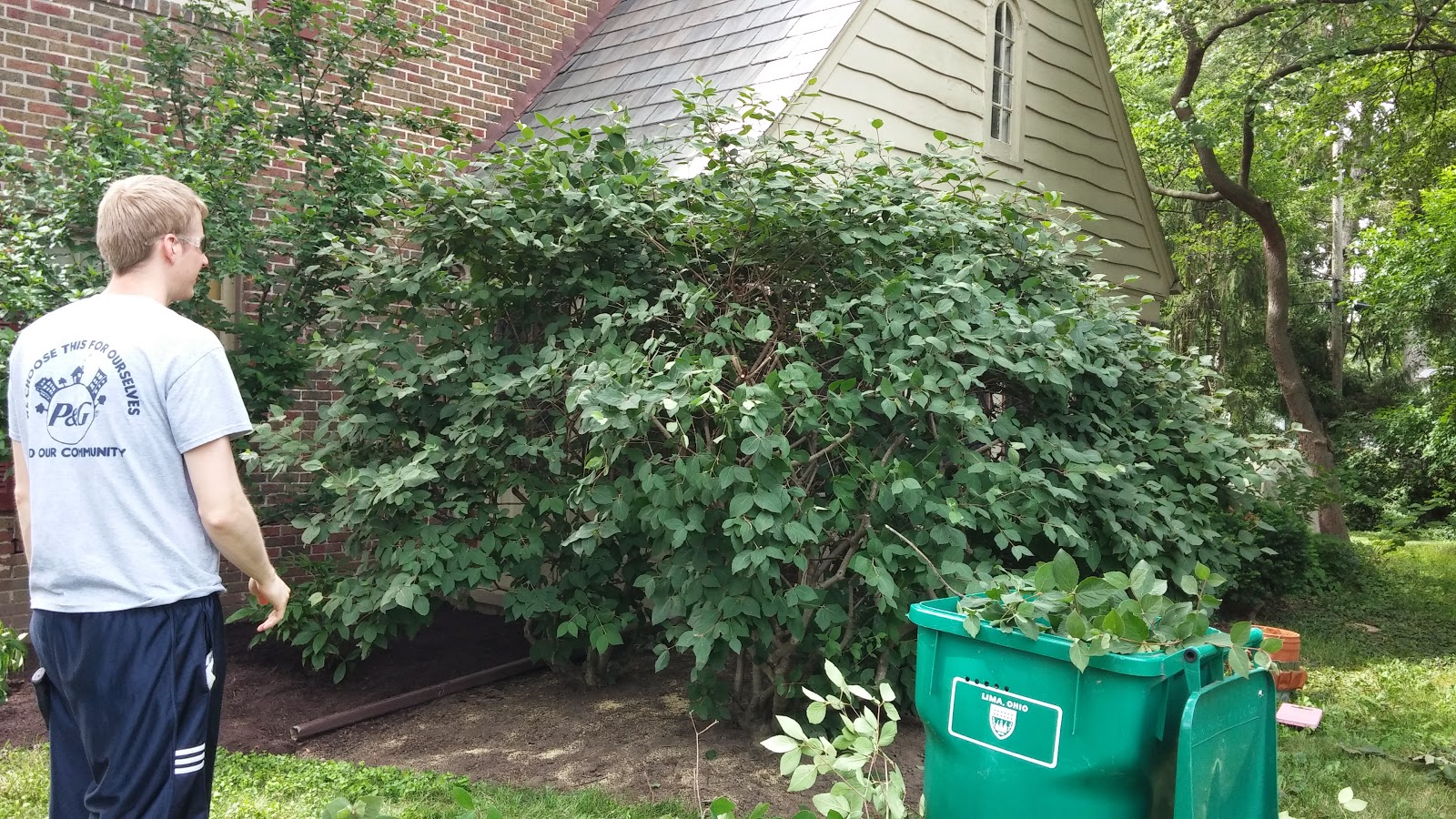 (Debating on whether or not we should tackle these bushes. There are three of them that hide the side room on our house.  We've tried to trim them in the past, but haven't had much luck.  We decided to really cut them back, just wasn't sure how to get it done.) 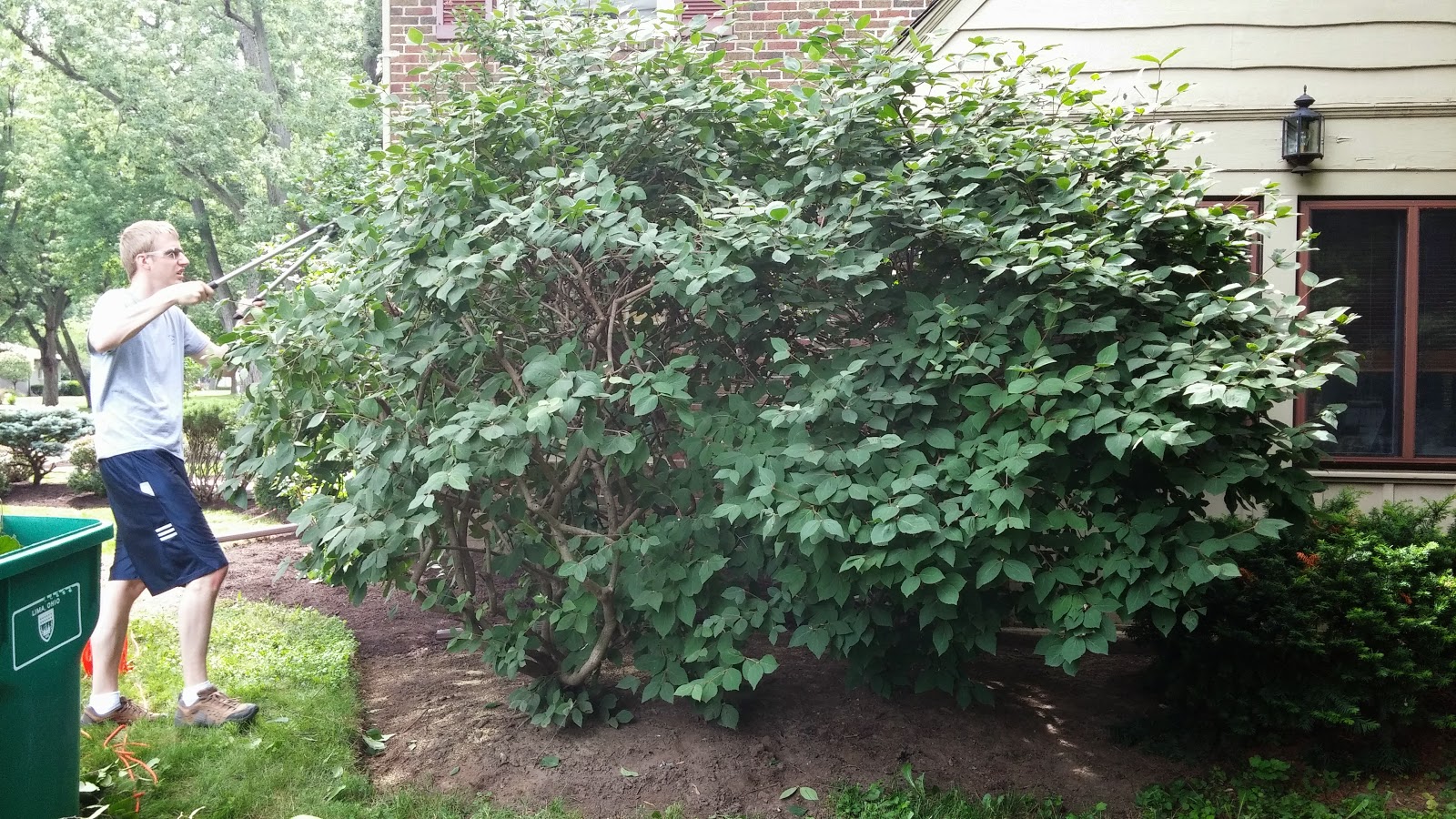 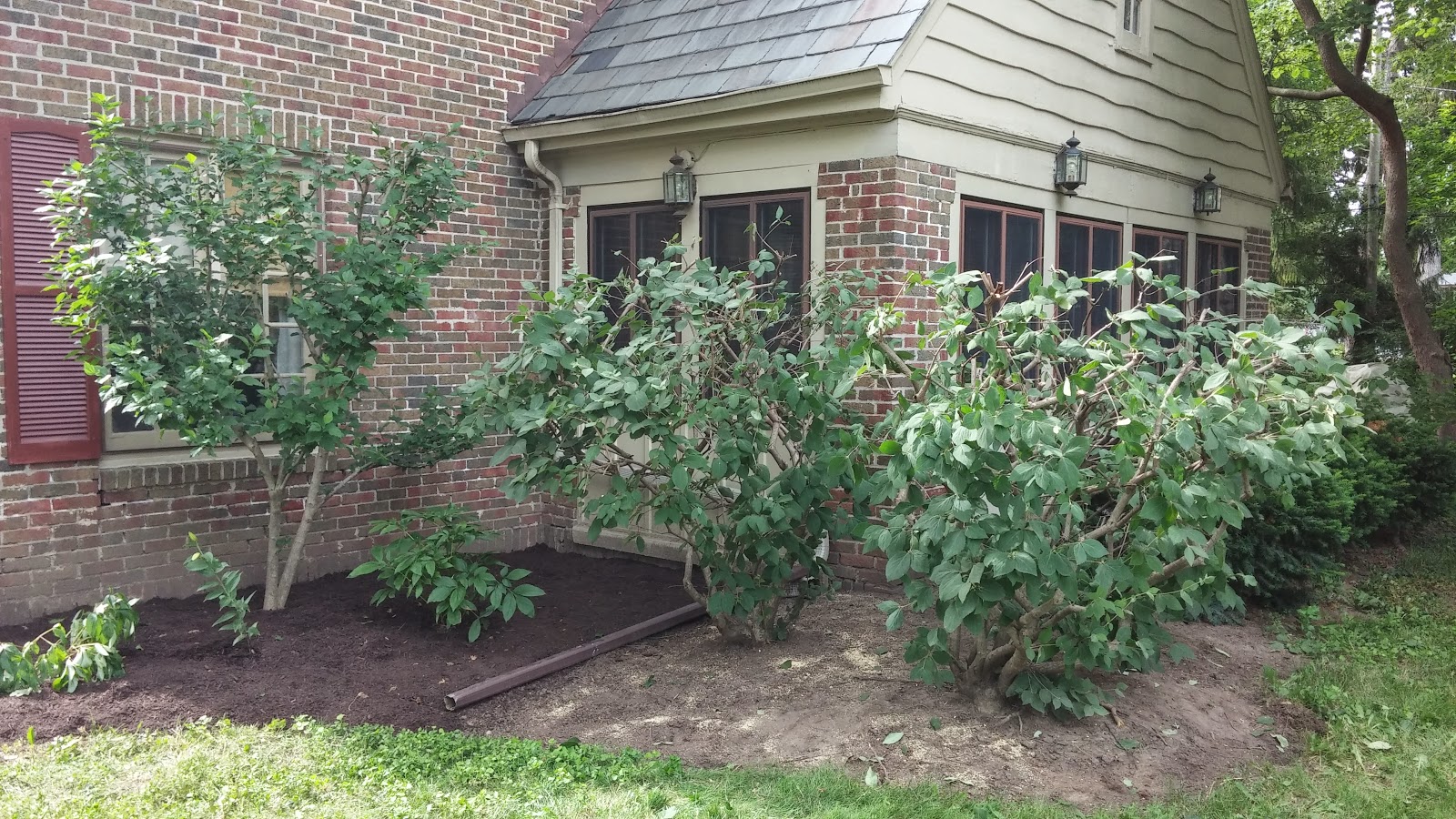 (The finished product.  We wanted to trim them down even more, but then they just wouldn't been heaps of sticks.  So we decided to leave some leaves on, even it it looks strange.  Ha.  Notice how half is mulched and half is awaiting mulch.  Steve also had to finish the edging along the side on the right.) 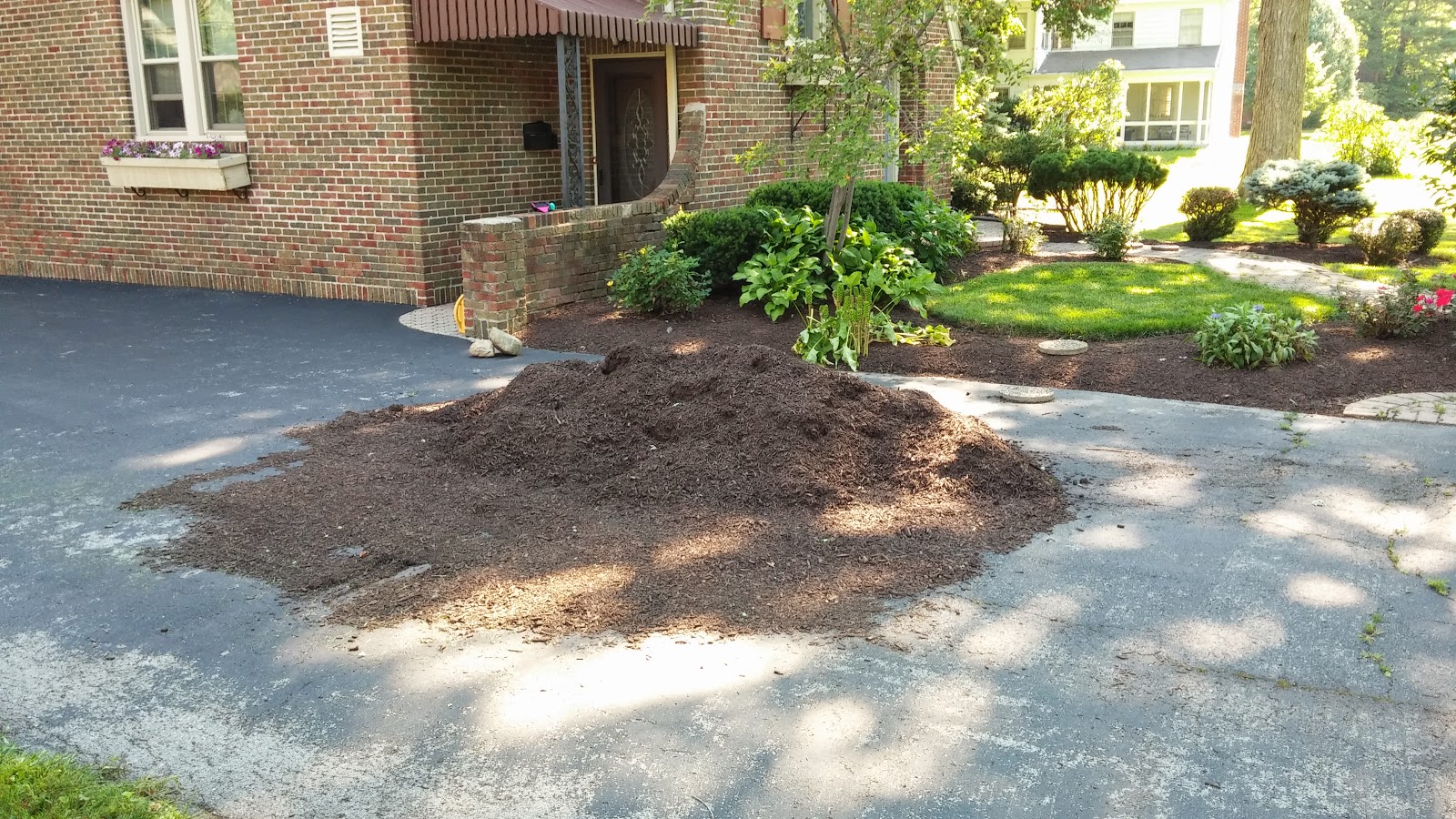 (After doing all the landscaping on the front and right side of the house, and even putting some in the back.  We decided we were done with the project for this year.  We were burnt out from all the work.  We probably spent about 3 weekends and two solid weeks on this project.  I could've gotten it done quicker without Bean, but we still exceeded our goals! Our neighbor took the rest of the mulch off our hands. 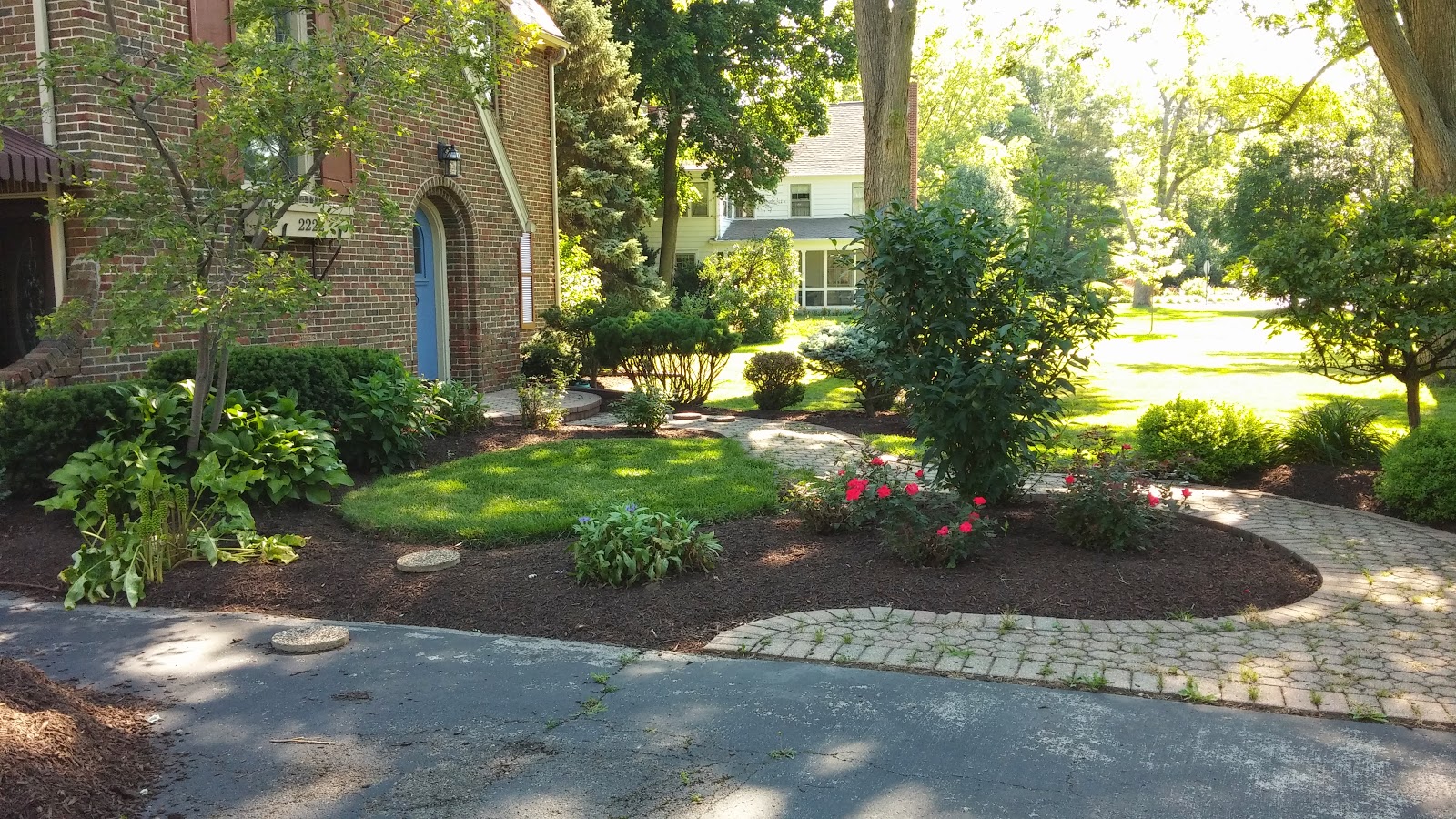 (We still have a few things here and there to work on - like weeds popping up in the patio sidewalk.) 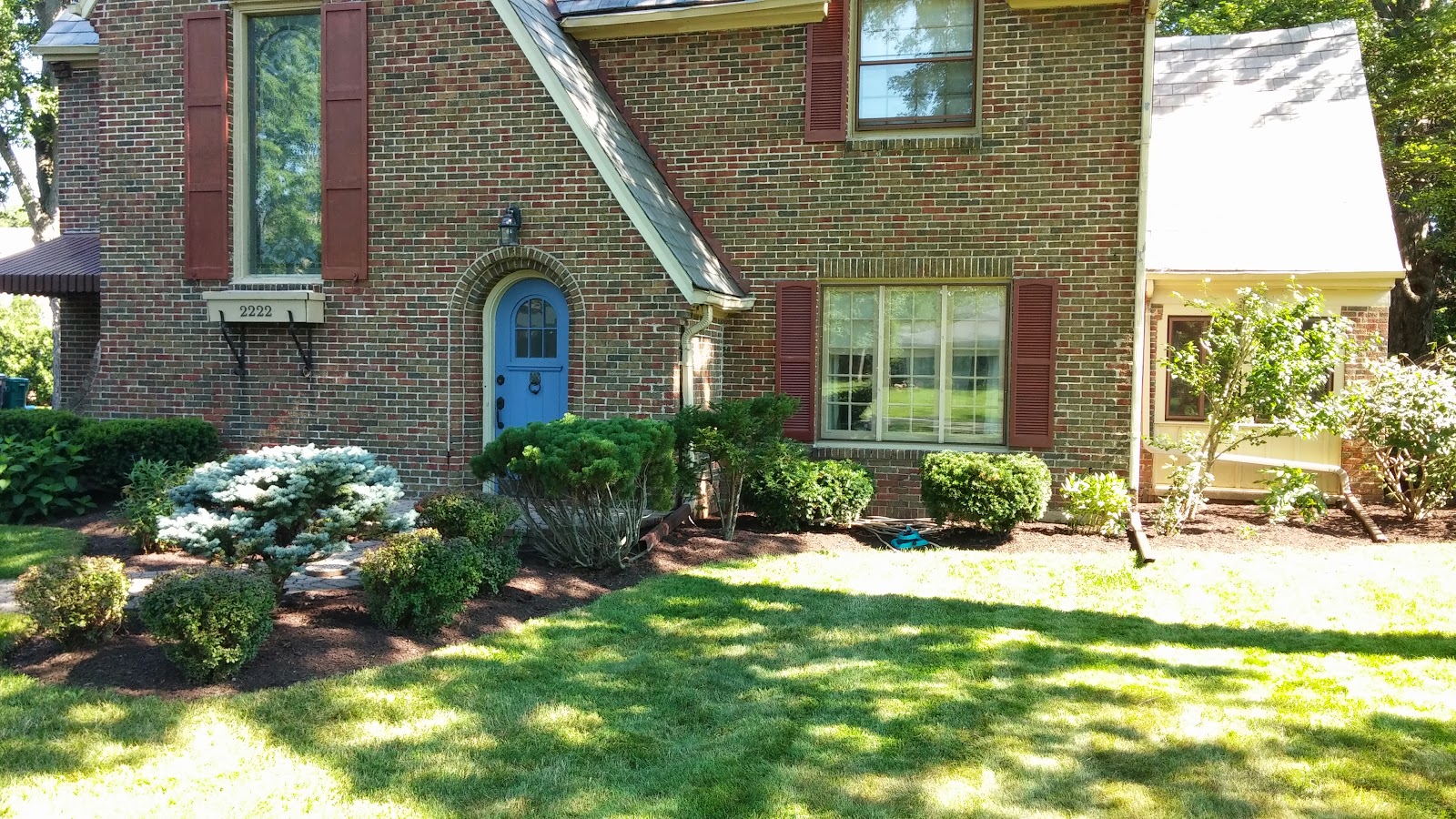 (When we worked on the landscaping a few summers ago, we only got the landscaping done just to the right of the blue door.  We never got to in front of the window, or around the side of the house.  Our original goal was just to get done to the front living room window.) 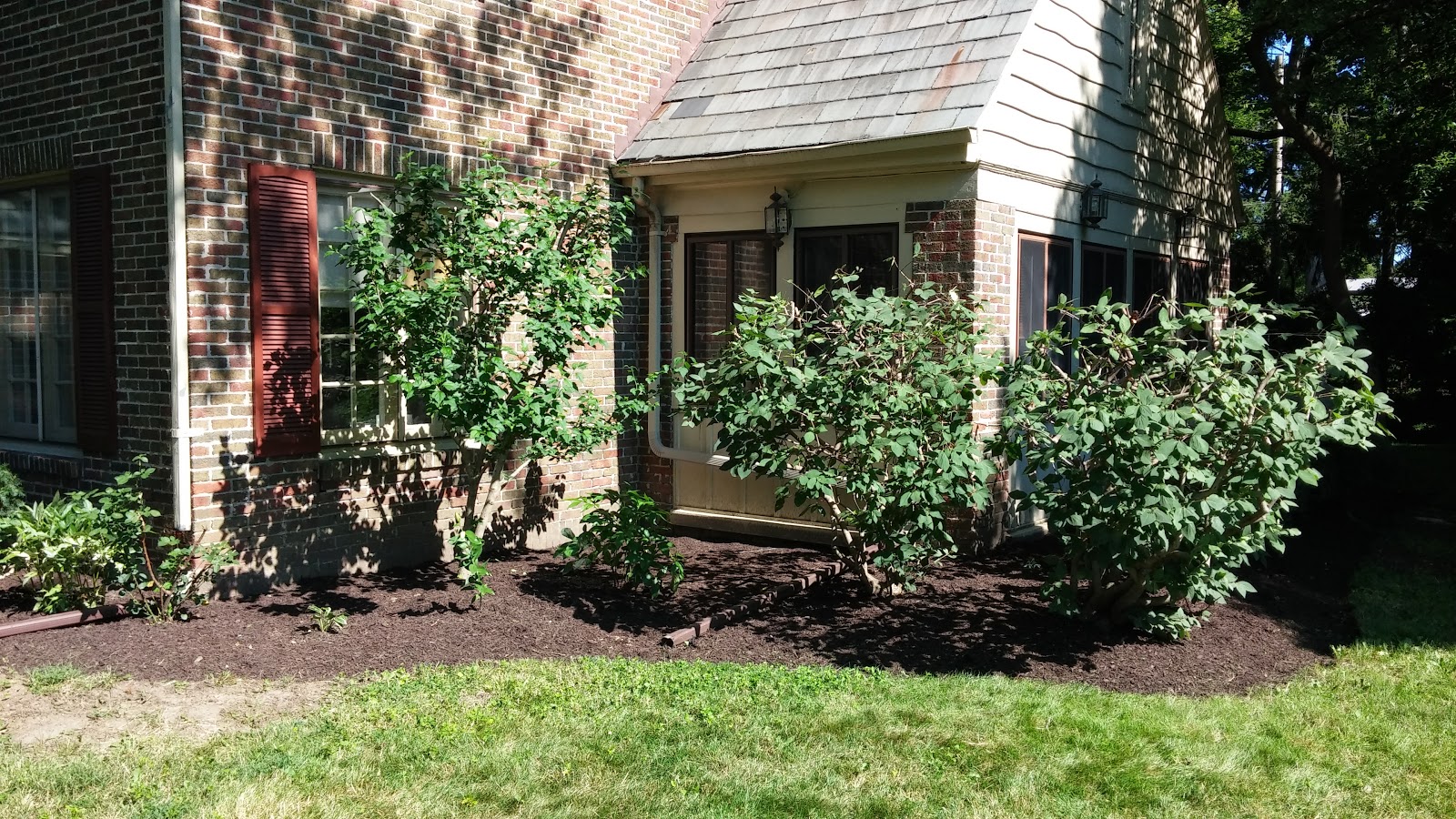 (This opens up the house so much!) 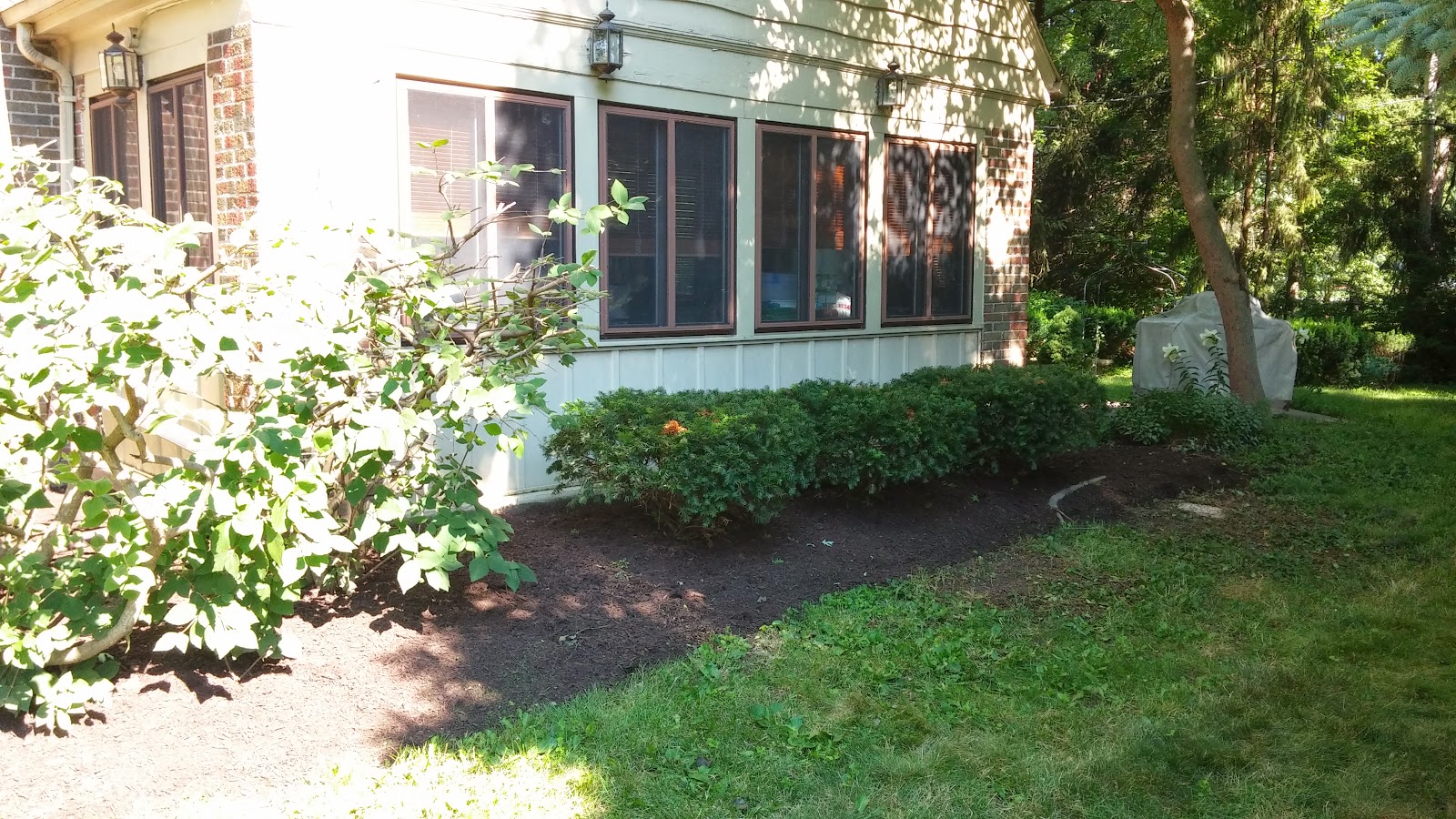 (We got the mulch all done along the side.  If we were overachievers, we would have continued in the back around the patio with the grill, but that didn't happen.  I guess there's next year?)
Posted by Unknown at 1:19 PM