Last weekend, we headed to Indiana on Friday afternoon.  We hung out Friday night at my parents' house.  On Saturday morning, however, we left Bean with my parents and we headed south for a little child-less getaway! Steve did all the planning (it wasn't a surprise though, I knew all that was happening).

Our morning started off with a bike tour of Indy along the Cultural Trail.  We met at 10am the Bikeshare headquarters, not sure what the tour would look like (as far as the group).  Upon checking in, we discovered that we were the only people signed up for the tour that day! So it was just Steve and I and our amazing tour guide Daniel! He was a funny guy who loved biking and sharing the history of the trail and some history of Indy along the way.  We'd bike to little locations then stop and hear what he had to share.  Some of the stops included different art pieces installed along the cultural trail, information about the different cultural districts, and stops at sites like the capital building.  The weather was beautiful and we had a perfect morning (sore bums and all!). 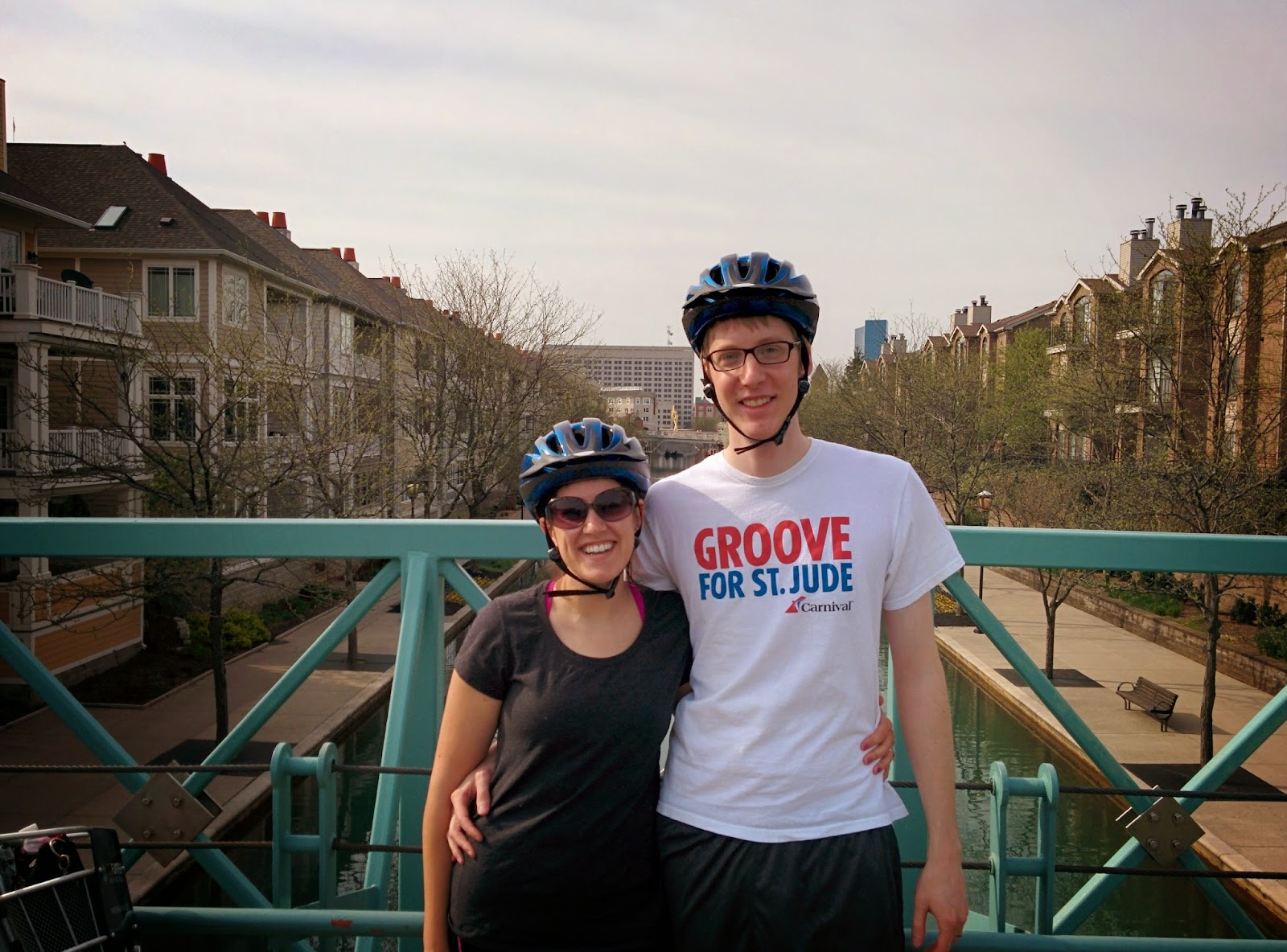 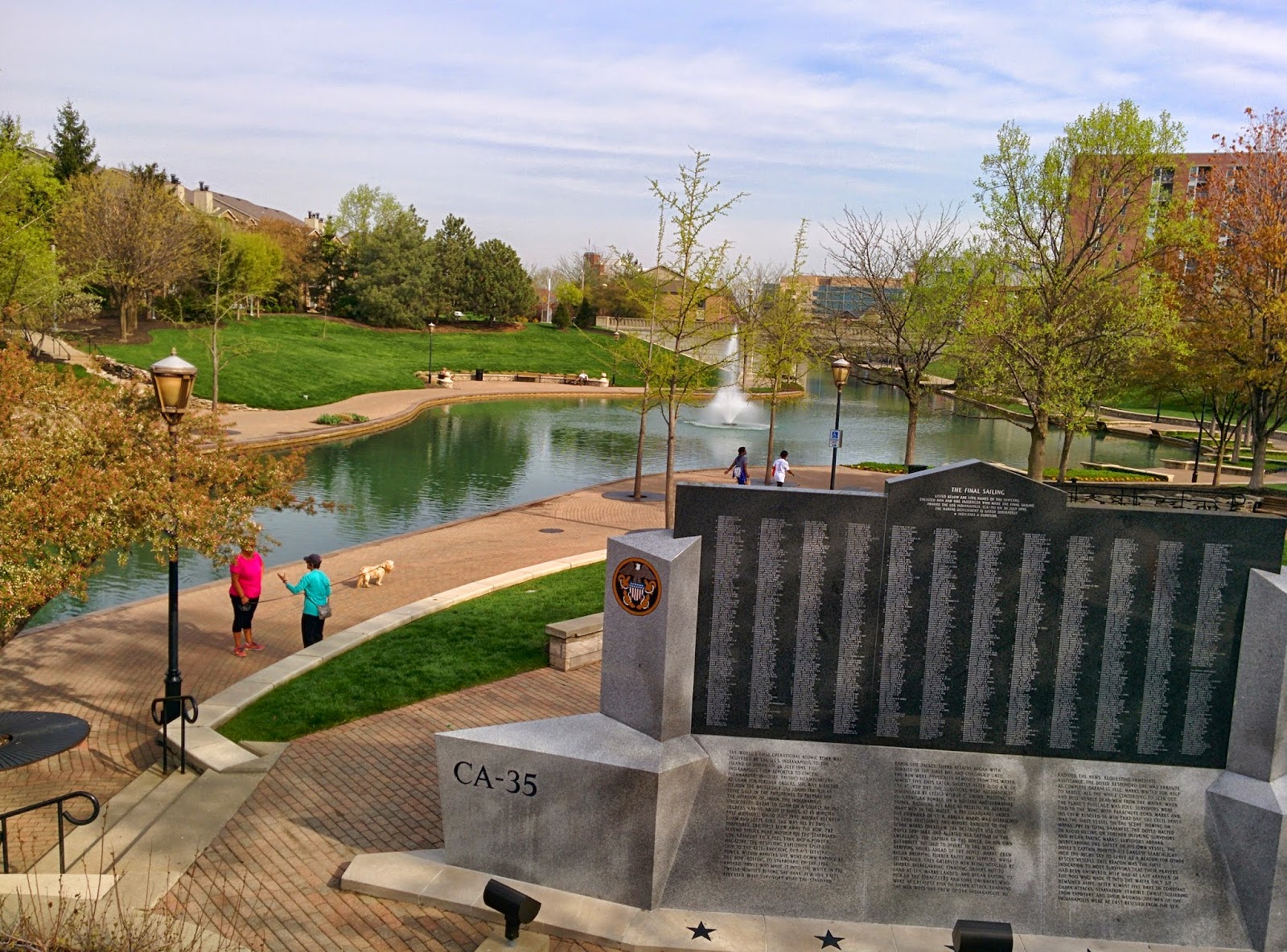 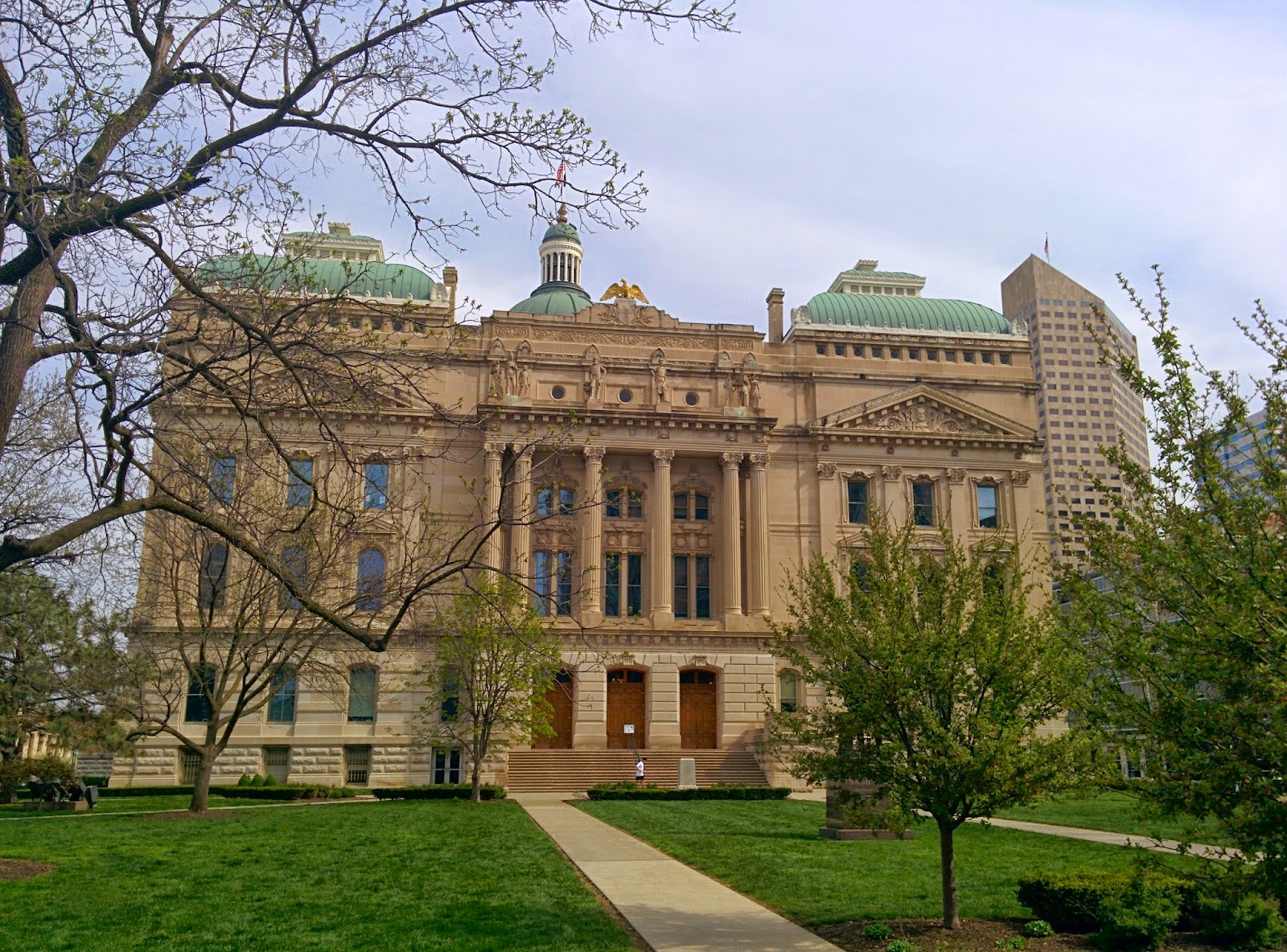 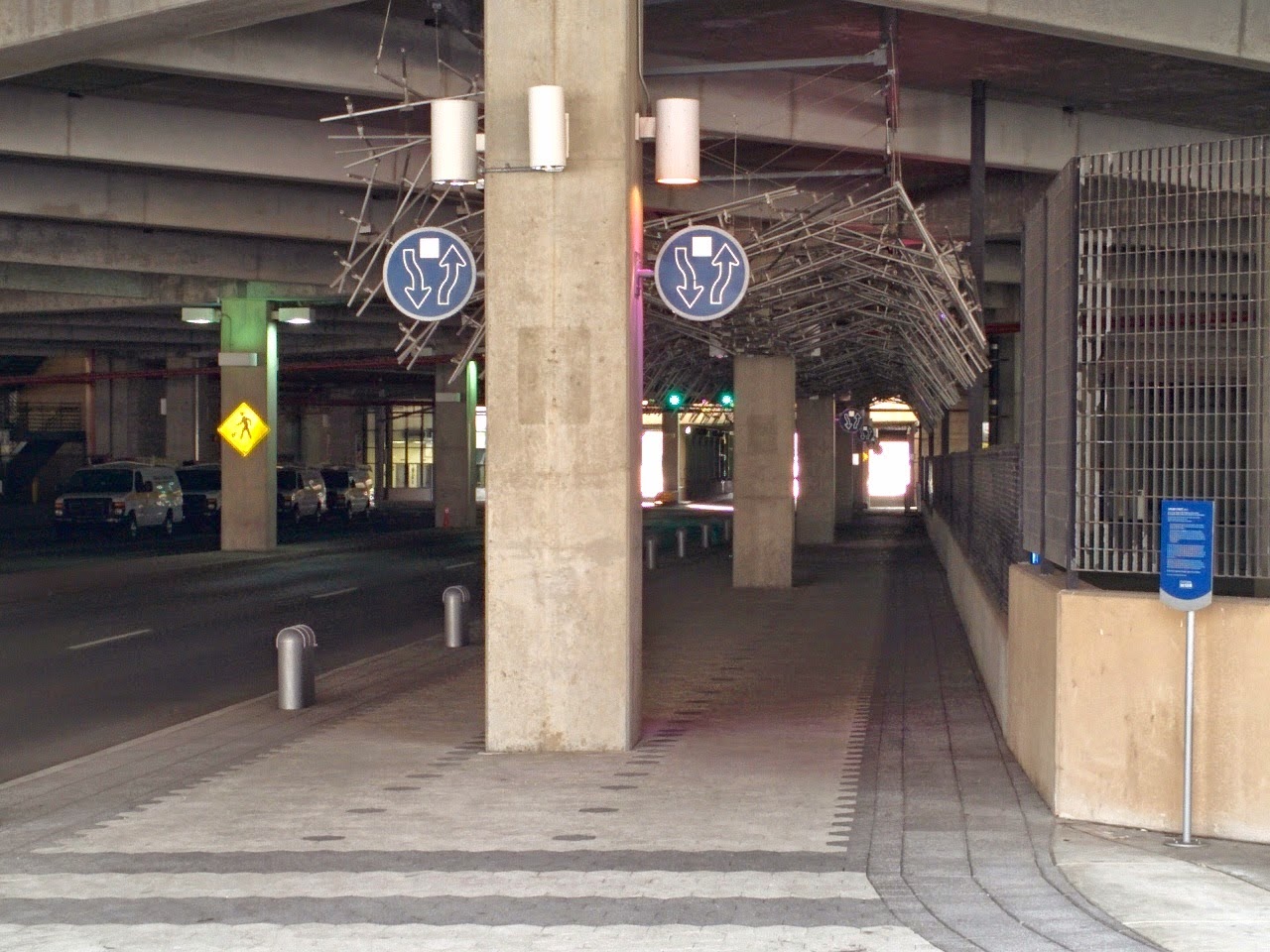 (One of the works of art along the cultural trail.  As you biked, LED lights above and below would light up and look like fireflies.  The artwork symbolizes how everyone's movement in space affects others' space.) 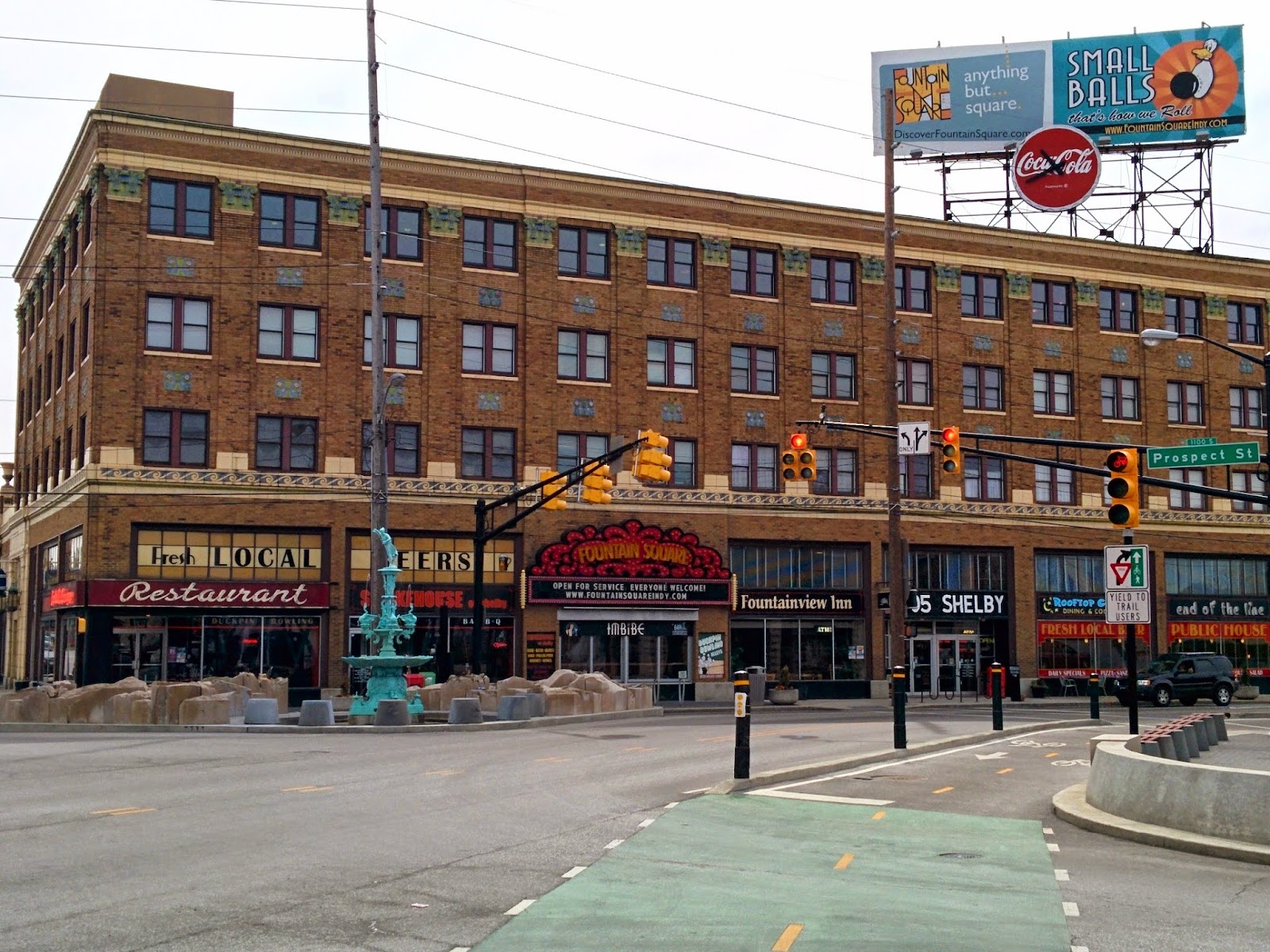 (Fountain Square.  This used to be a rail turnaround and was known as the "end of the line".  It is the furthest SE point of the cultural trail and is an up and coming area because of the trail.) 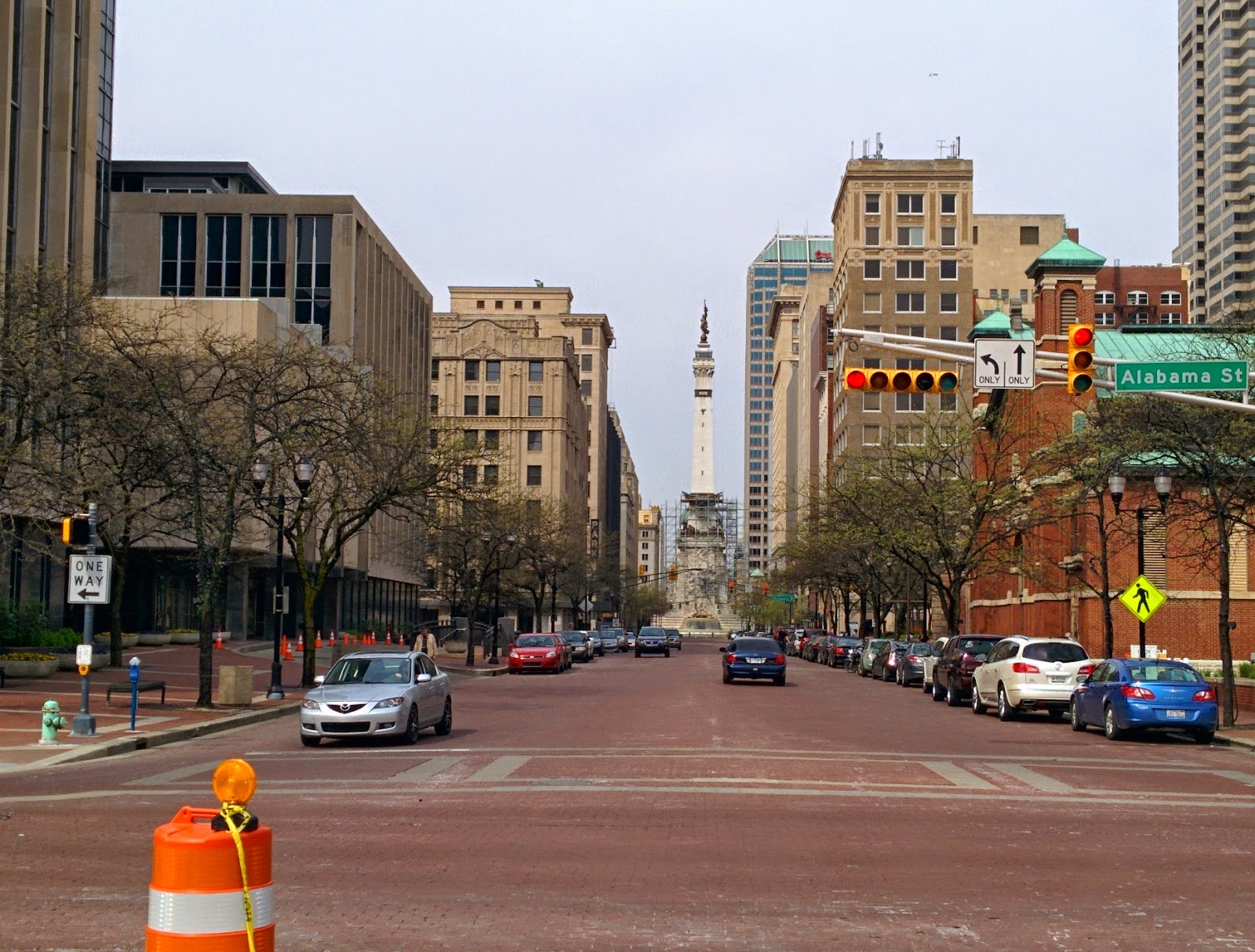 (View of Soldiers & Sailors statue in the circle.) 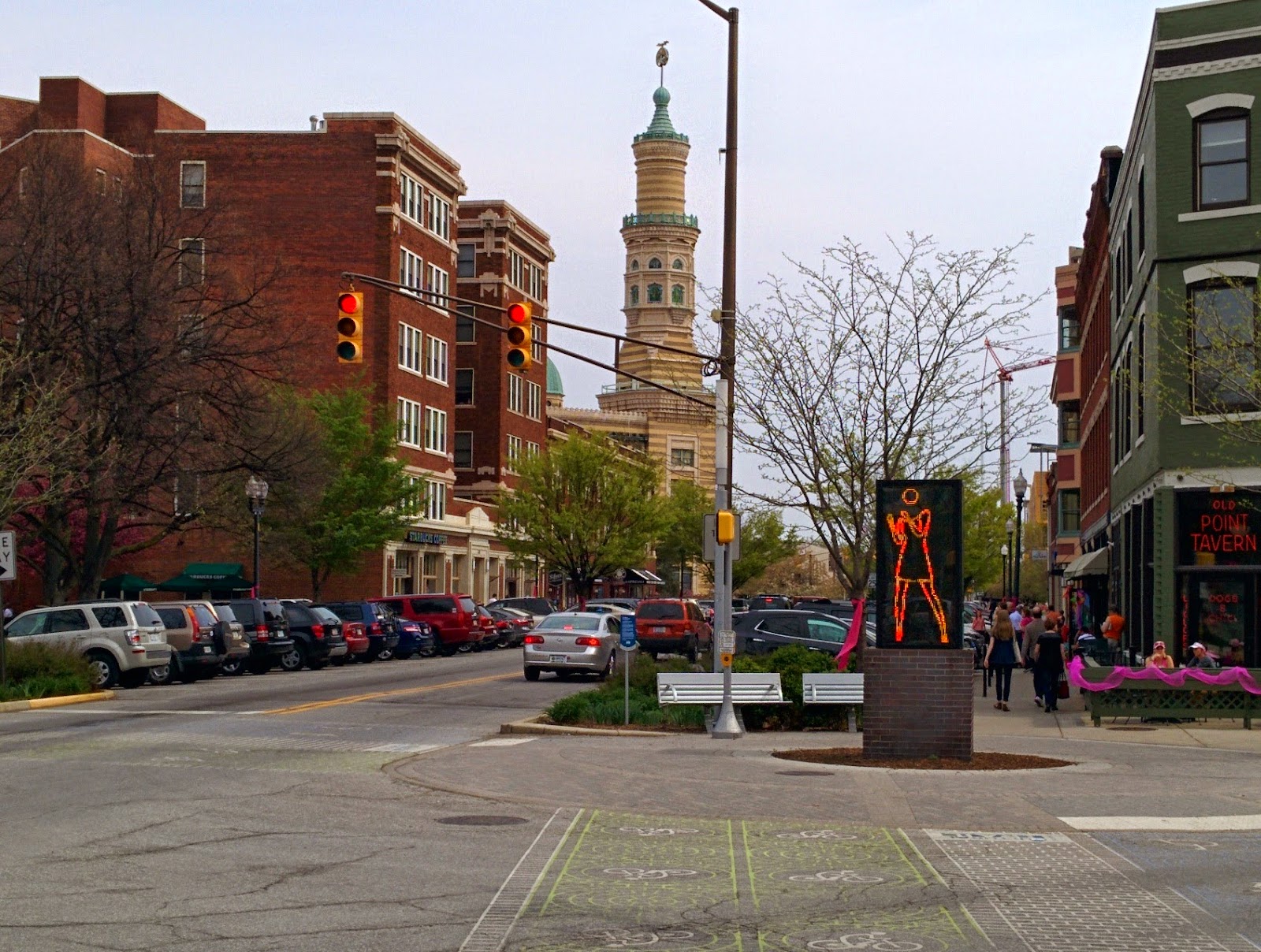 (View of the Murat Theatre and another artowrk on the trail -- "Dancing Ann".  You can see on the road the green/white bike images/blocks that marked the cultural trail.)

After our tour was over, we bid Daniel a fare well and drove to Cafe Patachou for a delicious lunch! I got the stuffed french toast and Steve got a turkey sandwhich.  Halfway through lunch we tradesies (planned)! We loved both dishes so much, we couldn't decide which was better.  We sat at the bar and got to watch all the food pass from the kitchen to the different tables.  Everything that came out looked delicious.  I'm pretty sure I could have ordered anything off the menu and been happy with it! Our server even kept saying he'd been there for 2 years and still has hard times picking out food to eat because he loves it all.

After lunch, we drove to Crown Point Hill Cemetery.  I went there on a field trip in middle school and remember loving the historical facts about some of the monuments and people interred there.  Since we had such a good time doing a walking tour in Pere Lachais Cemetery in Paris, I thought Steve might enjoy a walking tour around Crown Point Hill.  He had found information online saying you could get a guide map for a historical tour located in their mausoleum.  So we searched there first and found nothing.  We headed over to their head office and discovered that they no longer have those tour guide maps.  The guy did give us a map that pointed out some favorite spots in the cemetery.  So with that map in hand, we would drive around, park, and stop to search for the items called out (some were famous people, some were just fancy monuments).  The map didn't have any facts or information, though.  Some information I remembered, and some we just searched for on our phones.  After we saw all that we came to, we headed in search of our stay for the evening. 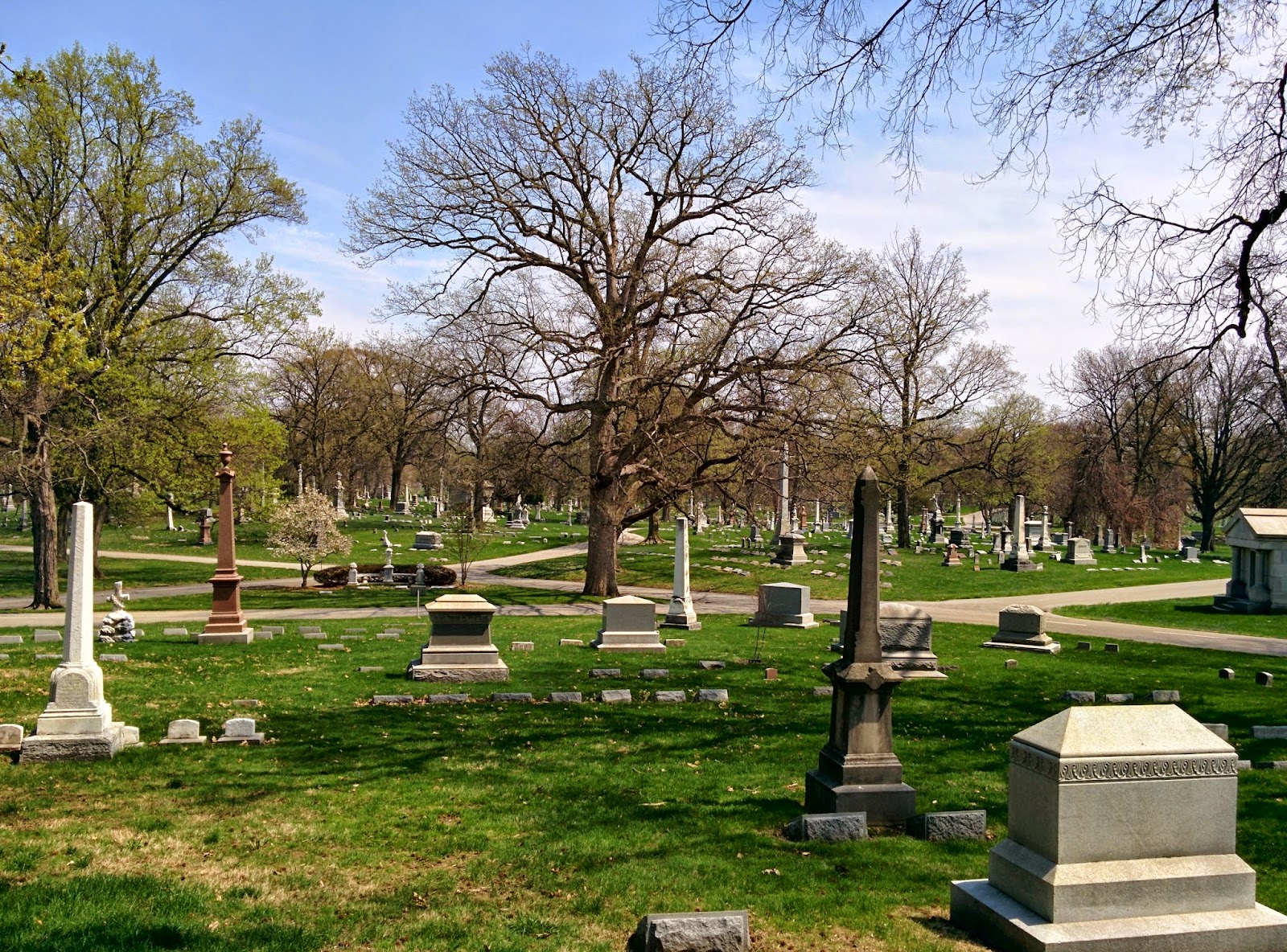 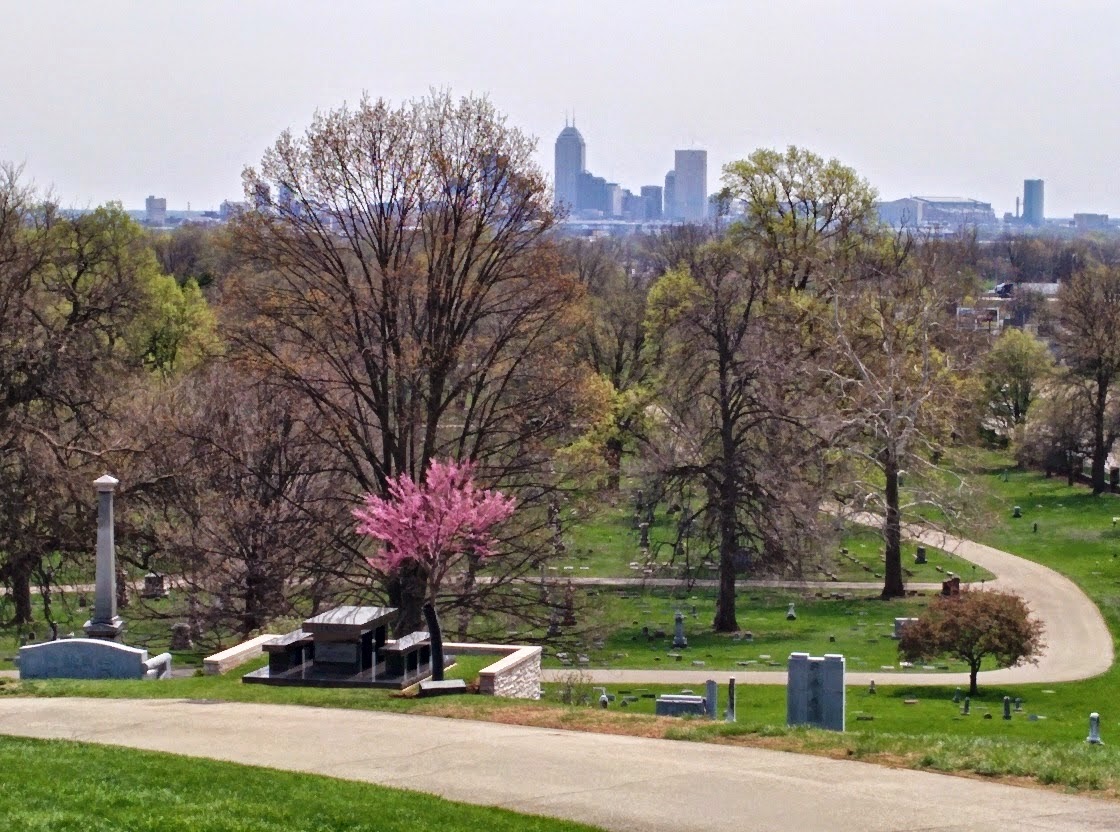 (Standing on the top of Crown Hill - where Robert Frost is buried - overlooking Downtown Indy!) 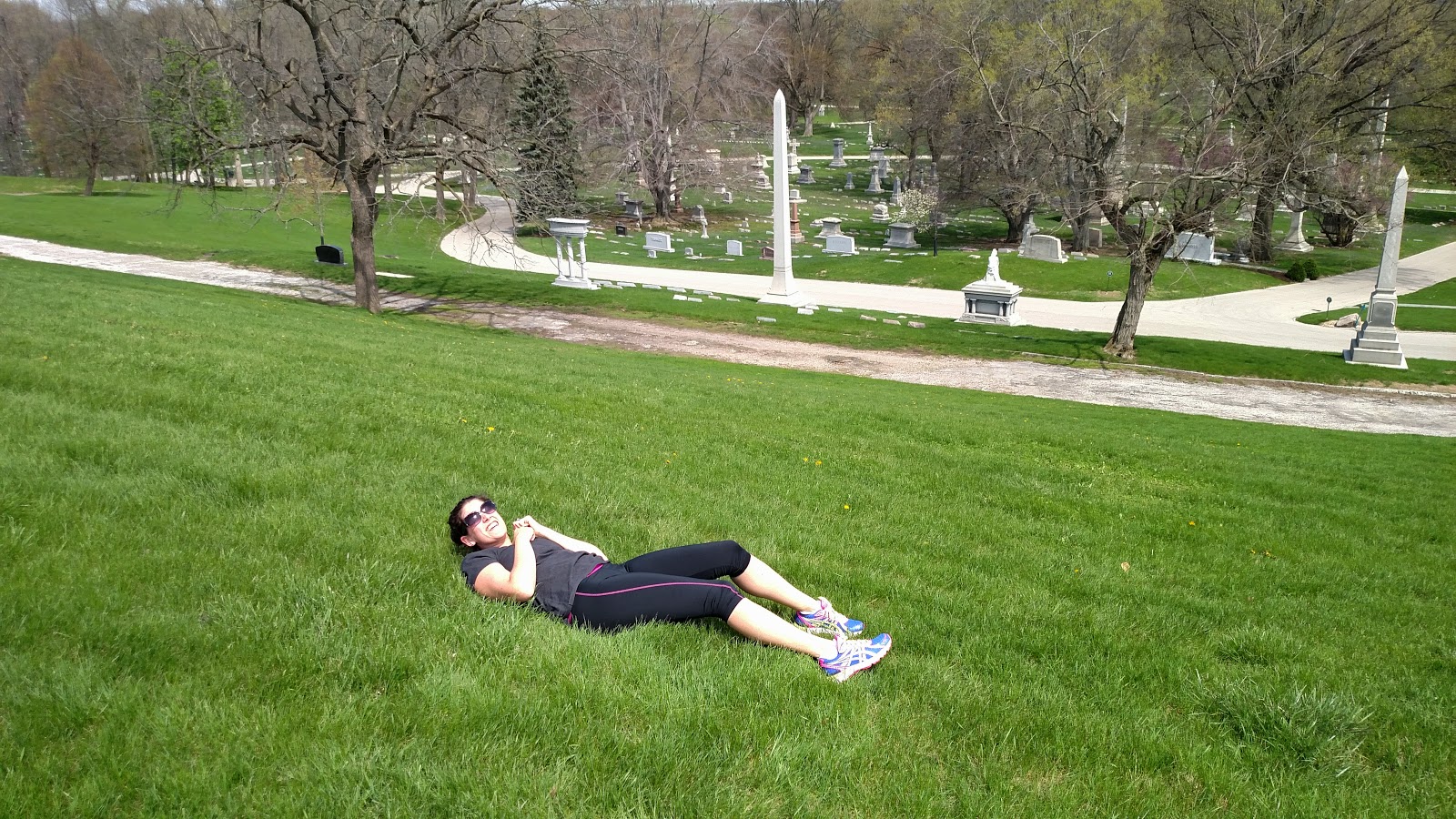 (So back in 8th grade, we went to the cemetery on a field trip.  We had to walk all over the cemetery, and it was a warm day.  We were all pretty tired when we got to the crown, so our teachers let us roll down the backside of the hill.  I was too chicken to do it, so I walked back down.  However, my best friend rolled down the hill.  A week later she became very ill, to the point of not being able to walk and use her arms.  They found a lesion on her brain and it took her the entire summer to recover and gain her strength back.  She always blamed this hill for causing the lesion - which by the way is gone and doesn't cause her any issues.  I joked around and sent her this picture.  She didn't laugh. Ha.)


We stayed at the Nestle Inn Bed & Breakfast in downtown Indy.  It ended up being located right off the Cutltural Trail and also a few blocks away from the Murat Theatre (I'll get to why that's important soon!).  We relaxed and freshened up in our room (which was so nice!) before heading down the block to get some dinner at Pizzology. We ate our delicious sausage pizza outside while people watching.  We thought dinner would take longer than it did, so we had another hour to kill before our big evening plans. We headed back to our room to chill. 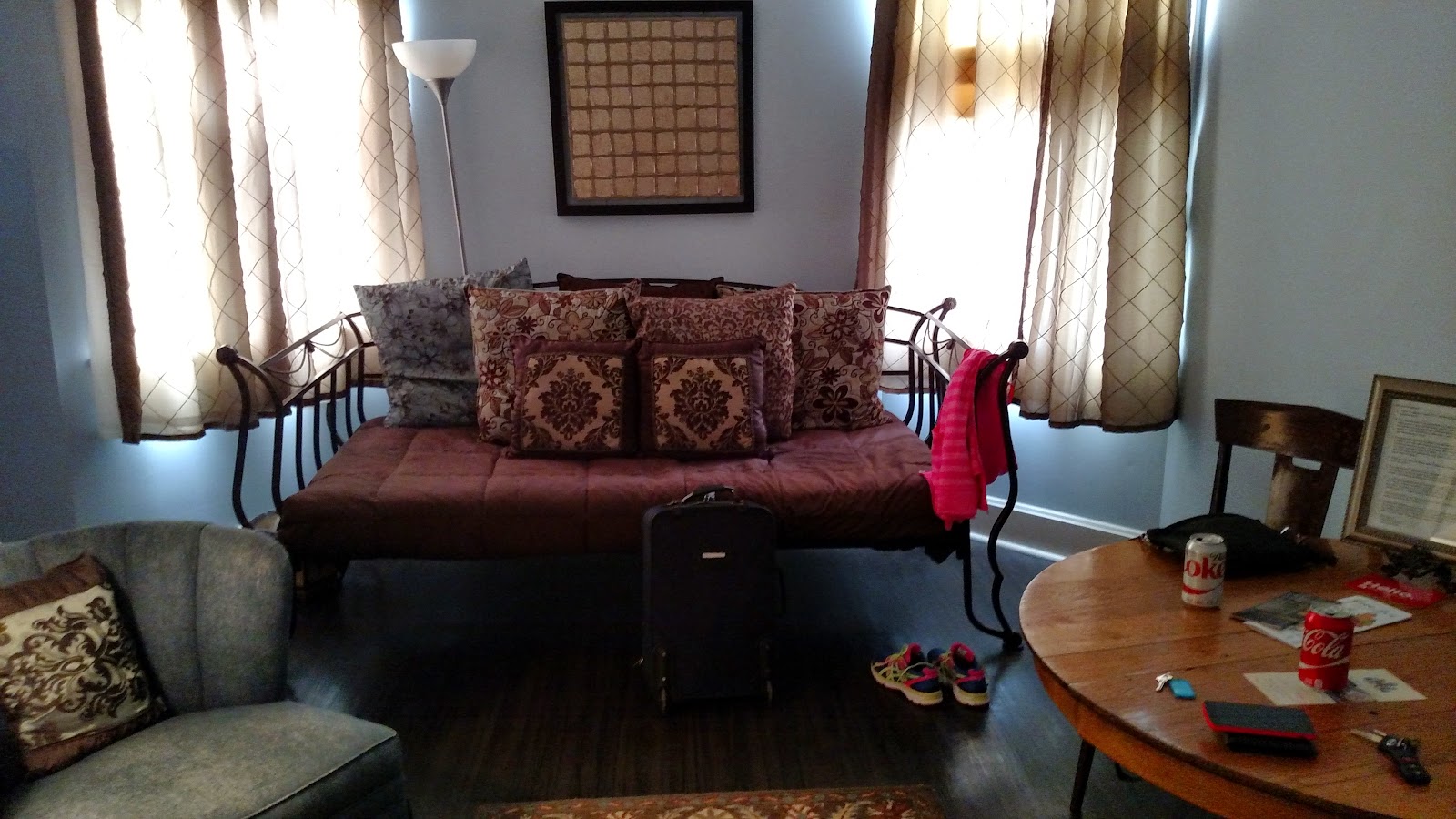 (Little living room/entry way into our room. There was a tv on the other side of the table.  The hall way/bathroom/bedroom is to the left behind that grey chair.) 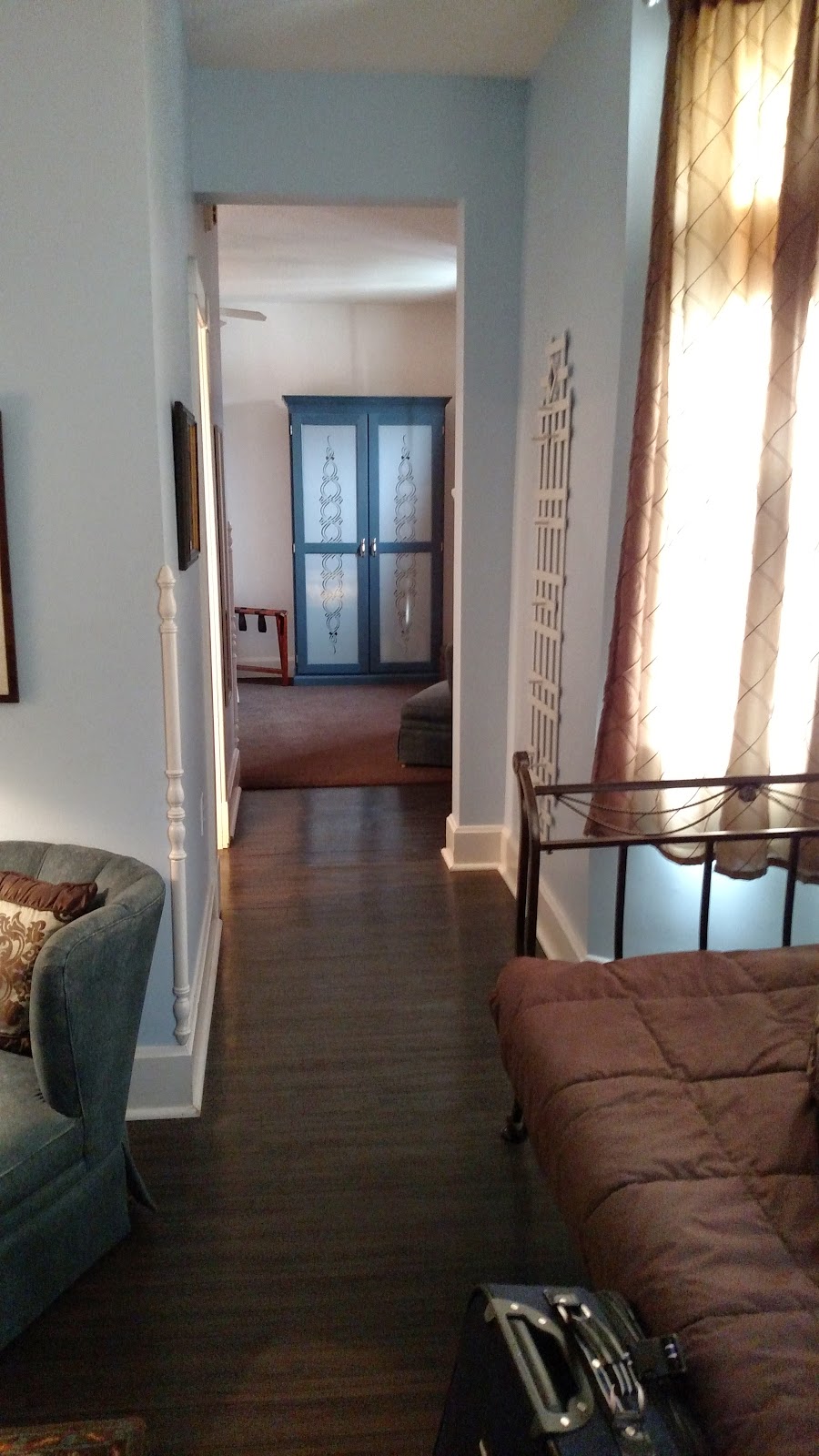 (Looking down the hallway - bathroom to the left - into the bedroom.) 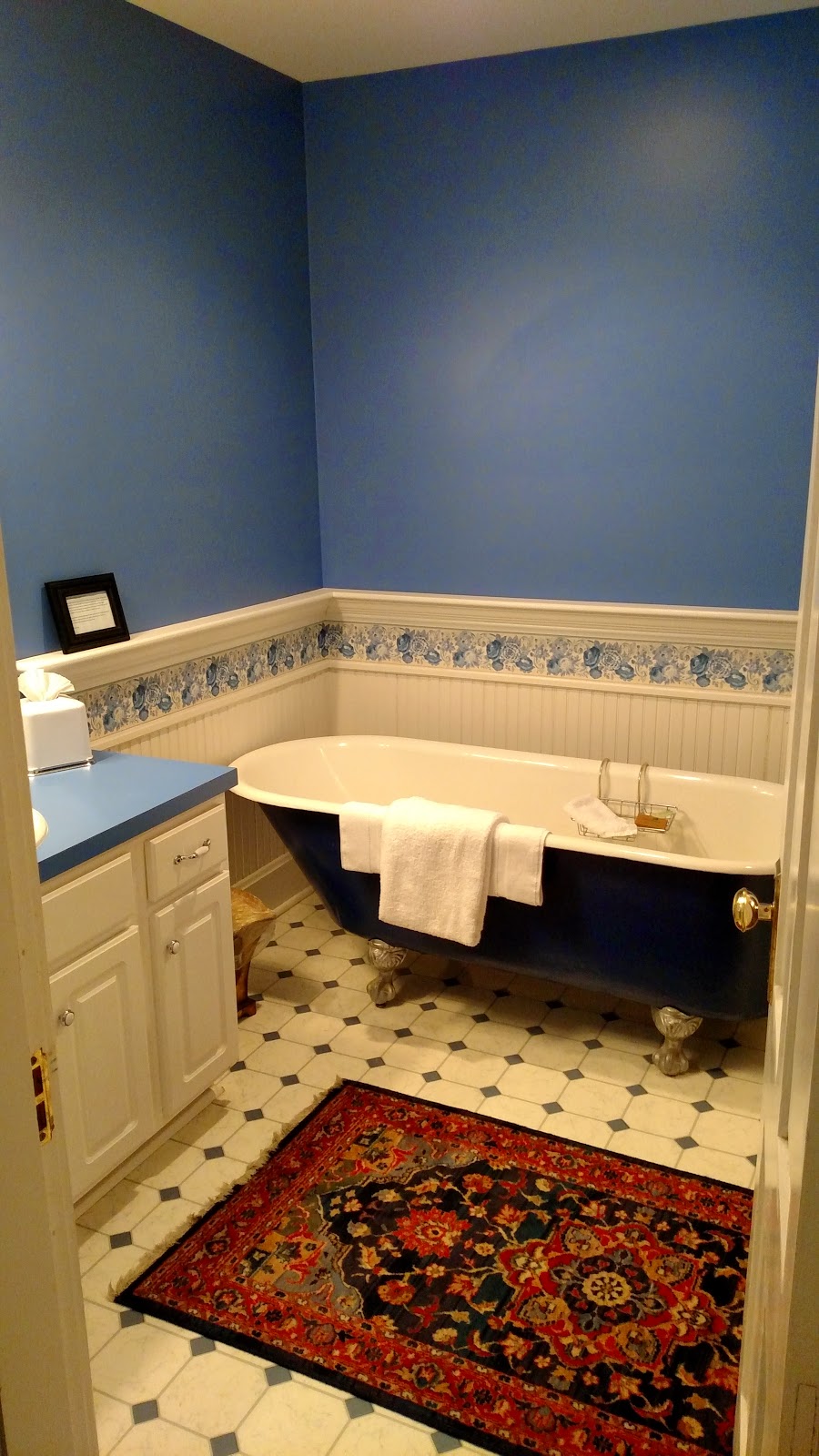 (Peek into the bathroom.  There was a stand up shower and toilet behind the door.  That bathroom was so big!) 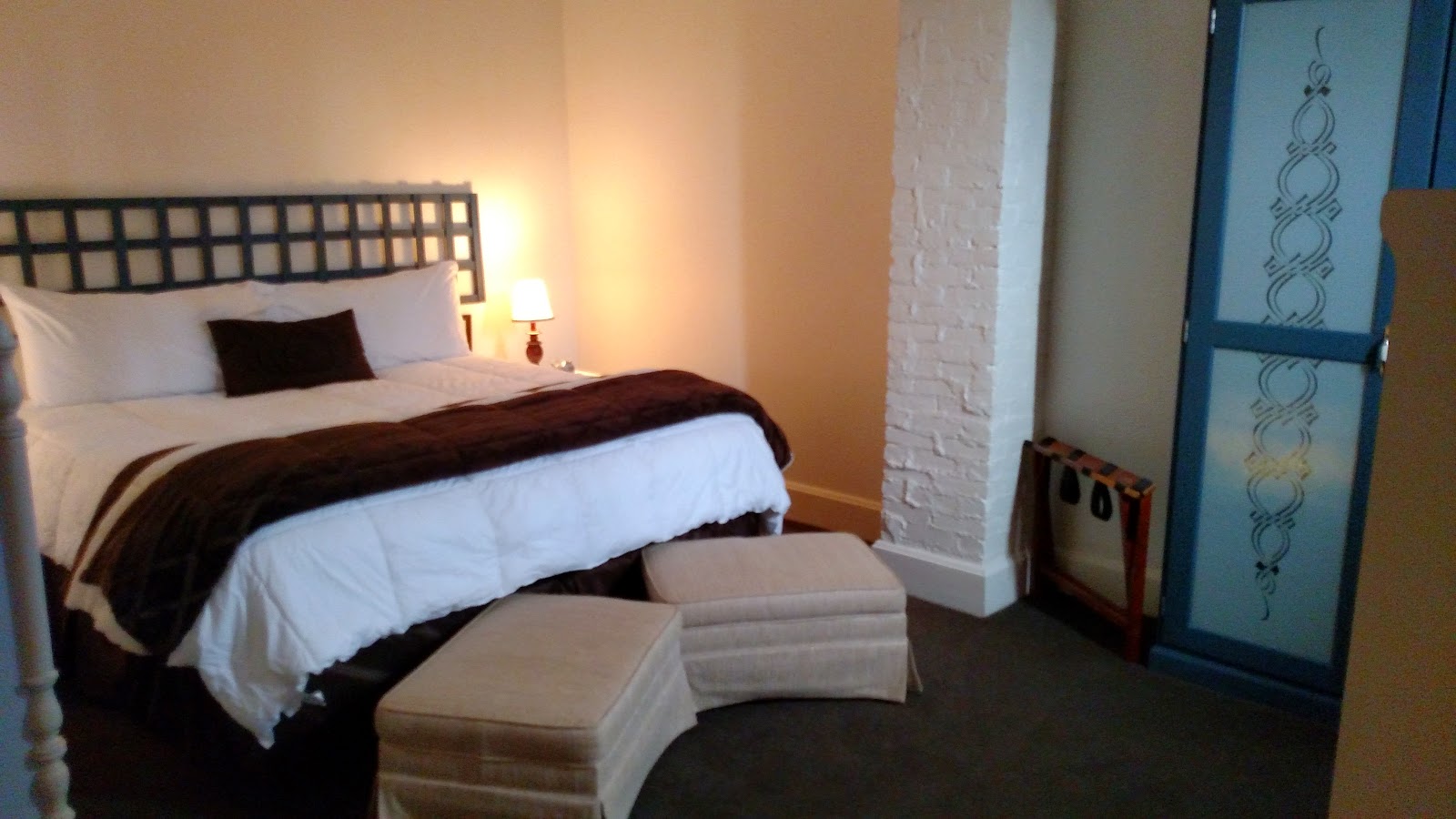 (Bedroom! We are used to sleeping on a queen.  It felt like we were in separate rooms on this king-size bed.  Maybe we were just both so worn out from the biking and long day that we we both zonked and never noticed the other person, ha.) 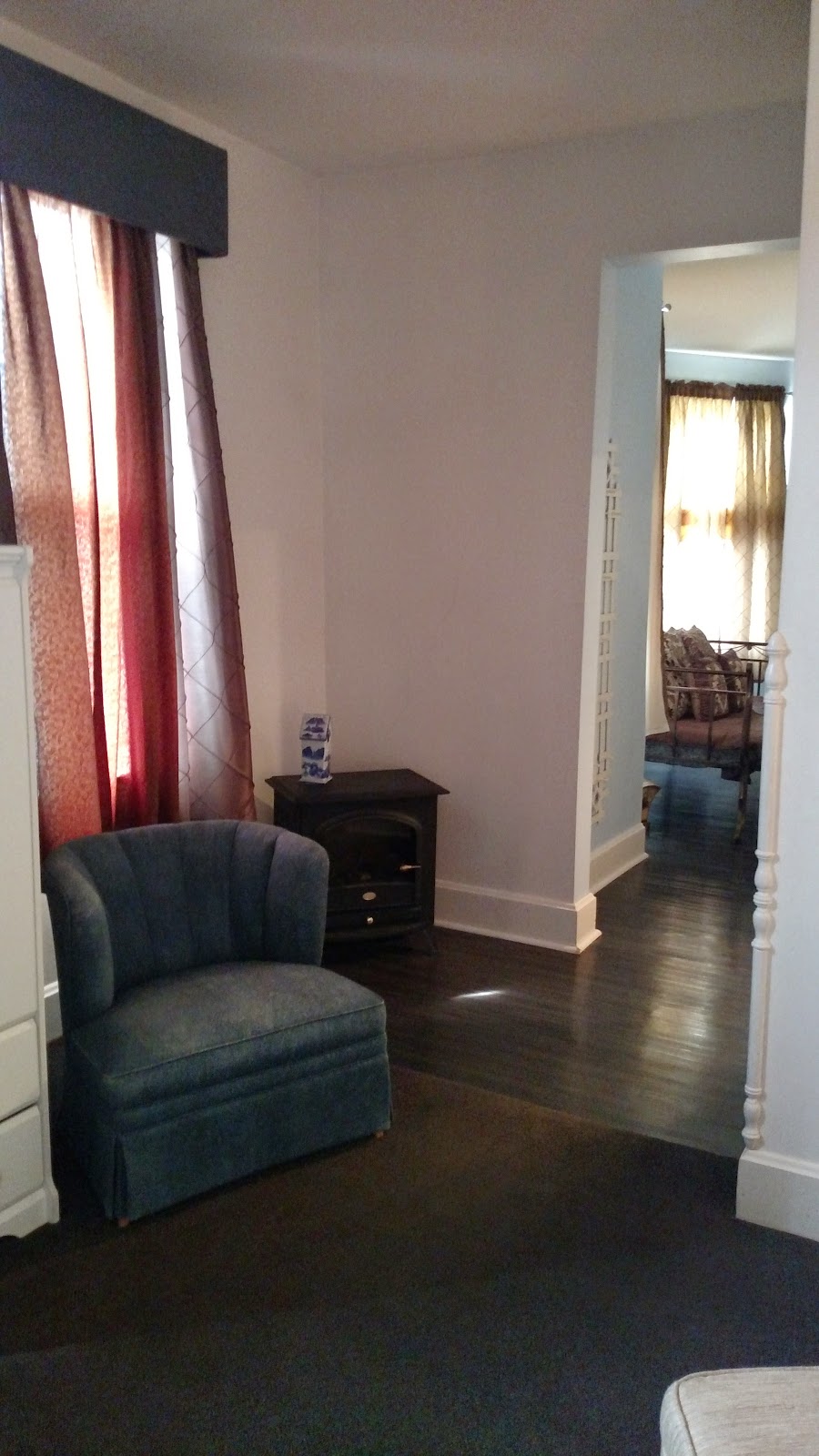 (Standing at the end of the bed looking back down the hallway.  We loved this place! So much room!)


At 7pm, we left our room and walked the couple blocks to the Murat Theater to see Sufjan Stevens in concert! Sufjan is an indie/folk singer/songwriter.  Steve listened to him back when we started dating.  I like listening to some of his music (some can be a little crazy), and especially love his Christmas albums.  He just released a new album Carrie & Lowell and is touring to share this album with others.  I've been to several different concerts of various artists and I must say this one was completely different than all of them.  Sufjan's music isn't really 'dance & sing along' kind of music.  So we just sat back and listened to him sing. 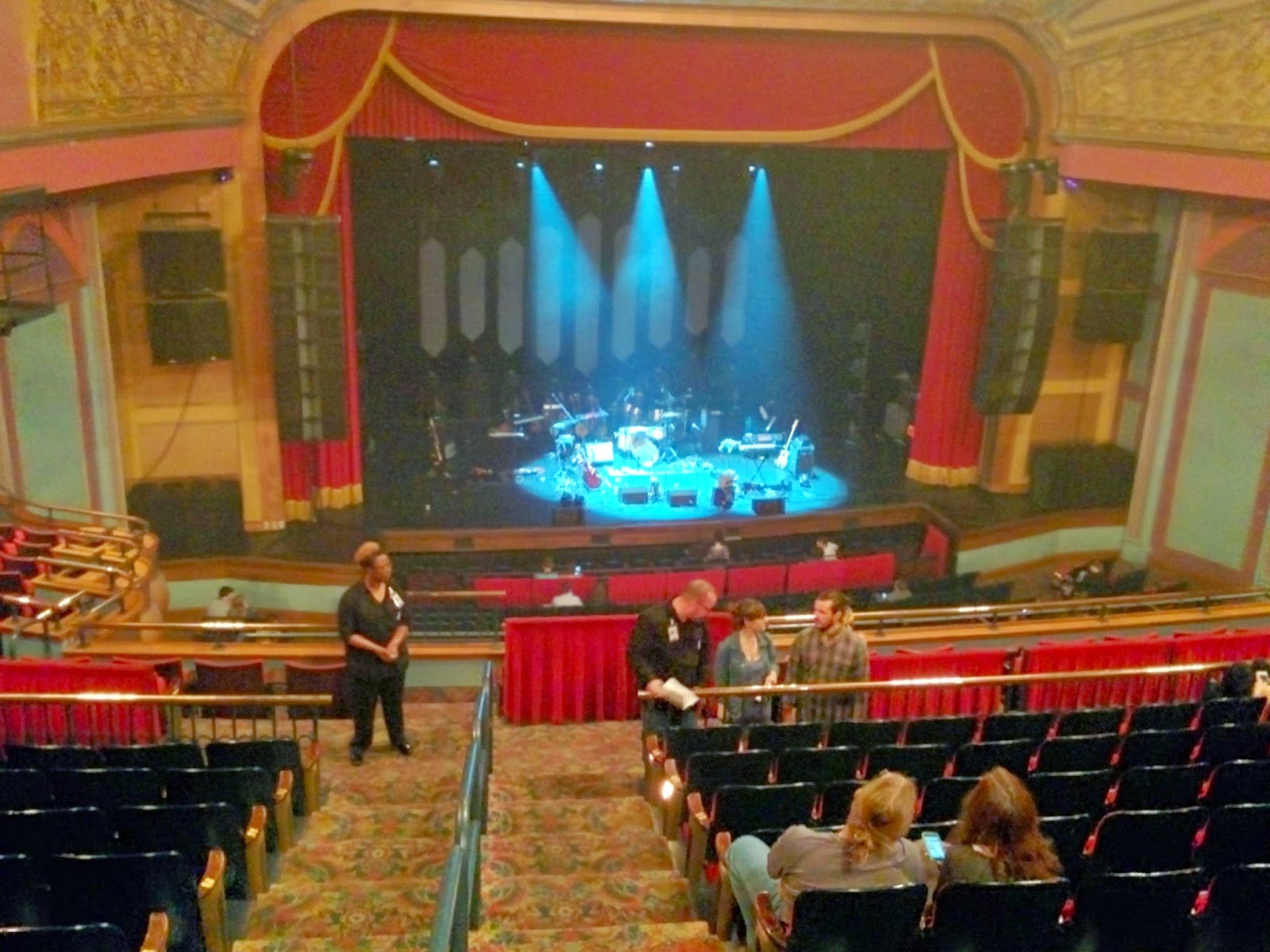 (Even though we were in the upper balcony, we had a great view and really enjoyed the concert!) 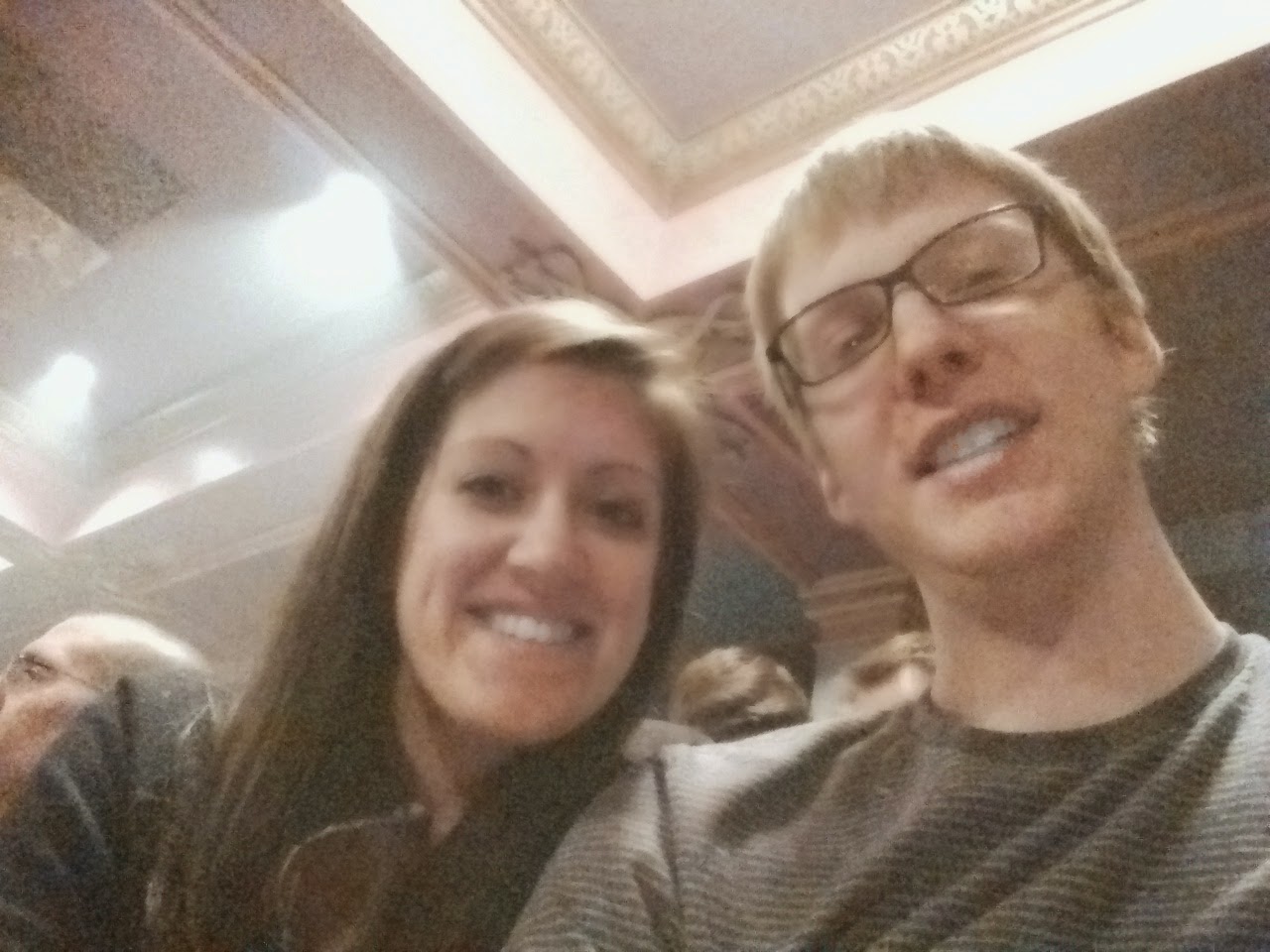 Sufjan's new album has been described as "bare" & "haunting".  I had listened to the cd a couple times before the concert, but I didn't understand it all.  However, after realizing that Carrie & Lowell were his mother (deceased) and step-father, and that this album is him coming to terms with his mom abandoning and neglecting him as a child, his songs really do become haunting.  He played the entire album without stopping to talk or explain any of the songs.  No extra words were needed to understand the pain and demons Sufjan has had to work through to come to terms with his mom's schizophrenia and eventual death.  While he sang some of the songs, there would be home videos playing in the background.  I still think back to the concert and still ponder a lot of his words and what he has gone through.  Really makes you think about your own actions, the family you are born into, and how you cope with life.

After the concert, we had a glorious no-kid night's sleep! Ha!  Bean has been doing a lot better with sleeping through the night, but she still has nights (like last night) where she cries out a ton and I have to calm her down by talking to her in the monitor (going in seems to escalate her anxiety and takes longer for us to get back to sleep).  It was so nice to just sleep and not worry about getting up at all.  I still woke up around the same time I normally do, but I didn't feel guilty about just laying in bed for as long as I wanted!  We headed down for breakfast a little after 9am, and enjoyed delicious yogurt, fruit, chocolate bread, and breakfast enchiladas.  There was so much food and it was all so delicious.  We headed back upstairs, backed, and made our return trip to Bean!

This was the 2nd time we've ever left her for an overnight (last time was for our anniversary when she was 9 months old).  We knew she was in good hands, but we seriously missed her so much! We'd think about what it would be like if she was there with us, her silly laughter, and sweet kisses.  We were so ready to get back to her (and it wasn't much more than 24 hours!).  When we got to my parents, she was happily playing with Ahm (my mom).  She immediately turned to see who came in, made eye contact with Steve first, then me, then immediately started sobbing.  I picked her up and she clung to me with her head buried in my neck. She was a little emotional for a little bit (would laugh/cry all at the same time) but eventually lessened up and was okay.  She was even excited to go home (I think merely because she was excited she was staying with momma/daddy).  The car ride was uneventful; however, I did sit in the back with her.  I wasn't sure how she was going to travel and I didn't want to have to keep turning around.  It worked out great!
Posted by Unknown at 8:41 PM