Adding to the Family 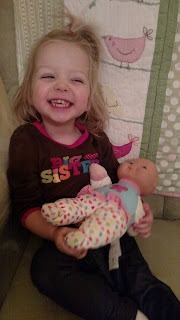 Bean is going to be a big sister this coming June!

So let me rewind the story back to where it starts in January! ***NOTE - the rest of this post talks about medical issues I had leading up to pregnancy.  If you don't care about the issues or the actual getting pregnant, just skip to the next blog post titled "Sprout"!***

I started running last winter and got really consistent in December.  By January, I noticed some issues with my menstrual cycle and went to the doctor.  They thought there was a possible bacterial issue going on and put me on antibiotics.  It seemed to fix the problem so I didn't think much about it. I continued my mini-marathon training and increased my mileage in running.  Eventually, I noticed cycle issues creeping back in.  I just chalked it up to the running being stressful on my body and decided I'd go back to the doctor after the mini in May (I mean, what's 2 more crazy cycles by that point??).

So I ran the mini and stopped running (mainly because I was "ran-out", but also had issues like losing toenails and cycle issues).  Steve encouraged me to take a break because he didn't think the positives of running were outweighing those negatives.  My cycles increased in craziness.  I finally cracked in June and made another appointment.

So I went to the appointment in June and described how my cycle was all off.  I'd have some slight bleeding when a period was due, but it would turn to spotting, and then I'd randomly have a real period. The length of time of the pre-period bleeding increased from being a few days to being a few weeks by August.  At the June appointment, the doctor did an examine and said that the pre-bleeding could actually be from an irritation from a bacteria in my system (remember, I had that diagnosis and antibiotics only cleared it up for about a month).  I shared my concern with the doctor and he put me on a little bit heavier oral antibiotic this time.  I returned in July for a follow-up.  Antibiotics cleared up the bacteria, but the irregular bleeding remained.

At the follow-up appointment in July, my doctor was out delivering a baby, so I saw his associate.  She decided that it was possible that my body needed a kick-start to get back onto a normal cycle.  We discussed going on birth control, but Steve and I were starting to toy with the idea of another kid. To me, that would solve my problem (irregular bleeding) -- get pregnant and stop it all together - ha! So she put me on Provera.  It didn't work and actually had some adverse effects.  I ended up waking up in the middle of the night and felt really weird.  My brain was foggy and I couldn't figure out what was wrong.  I went to the bathroom because that was as logical as I could think.  I ended up passing out on the bathroom floor. As quickly as the weirdness came on, I was completely fine after passing out.  I just went back to bed and told Steve in the morning. Haha

So I had a follow-up appointment at the beginning of September (number 4 for the year for those keeping track).  This time, I got to see my actual doctor.  He didn't agree with the Provera route (nice to know after the fact).  He came up with the theory that I wasn't ovulating.  We discussed that we were okay with getting pregnant, and he decided to just go ahead and treat me as infertile, even though it hadn't been a year.  The signs were there and his main goal was to get the bleeding and irregular cycle to stop. So he prescribed Chlomid.  I was to take it on day 5-9 of my cycle.  However, I wasn't positive what my actual cycle was! I was pre-bleeding for 2 weeks leading up to what I called an actual period.  He said go with my gut and choose the "actual period" as day 1.

Enter time line into play -- day 1 just so happened to be the day we left for our cruise -- Happy Vacation! But since my cycle was a crazy cycle, I was fine by day 3 and enjoyed the cruise immensely! I took the medicine as prescribed days 5-9.  We weren't being intentional about paying attention to days after that (for those of you who don't know and want to know -- typical cycles work in 28 days, you ovulate somewhere in the middle -- day 12-14).  After all the issues of the year, I didn't expect the medicine to work so quickly let alone get pregnant.

The next couple weeks went by and I realized I didn't have the irregular bleeding I had been having all year - Score!  The medicine worked! However, I did start to notice I wasn't feeling the best.  I told myself it was just side effects from the medicine and to not be crazy.  Well eventually, I started feeling more nauseous and achy.  I told myself it was a period coming, but in reality, I kept thinking, "the last time I felt like this was when I was pregnant with Bean. . . ".  I told Steve my thoughts and he just told me to stop being crazy.  When you take Chlomid, you have to have a blood test to check your levels.  I went and got the blood drawn on Monday and told myself to let the doctor contact me; besides, a period was to start on Friday.  By Wednesday, I was really feeling sick (and crazy!), so I called them.  They said my progesterone level was 60 - typically, they are looking for a number in the teens to indicate ovulation! Yikes.  I panicked. What does a high number mean?!  The nurse just said to wait to see if a period comes and then call back.

I had told myself no pregnancy tests until a missed period.  We went to church that night and I had to chew gum the whole time because I was so nauseous.  As soon as we got home, I took a test.  I didn't even tell Steve.  If I was being crazy, I didn't want to admit it to him.  I wasn't crazy - the test was positive!  I immediately showed Steve and we just stared at each other - ha!
Posted by Unknown at 12:34 PM