On October 16th, Bean turned TWO! It is hard for me to believe that she has been a part of our family for the past 2 years.  It's crazy to look back on pictures from when we first met her until now.  She's hit all her major milestones and has become quite the little girl.  I'm not exactly sure when it happened, but when I look at her now, I don't see the baby in her, I see a big girl! 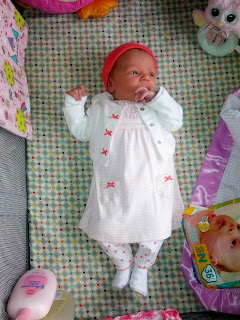 (Who is this baby?!  She seriously is so small and looks so much different than my little blonde haired chatterbox!) 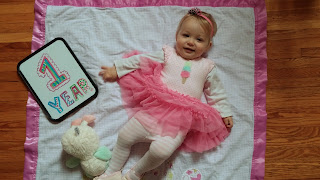 (At a year old, she looked much closer to what she looks like now, but look at those chubby baby cheeks!) 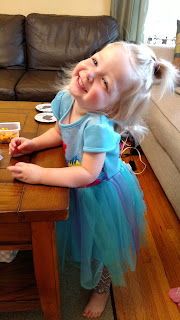 Her personality has really developed too.  I see a lot of me in her (emotions, laughter, caring spirit, etc) and lots of Steve too (prefers order, tinkers with toys, focuses on her work, etc).  She is quite the little girl and is constantly making us laugh (even when we need to be disciplining her!).  I'm pretty sure she has figured out when mom turns her head the other way, it means I'm laughing.  I gotta work on that one! 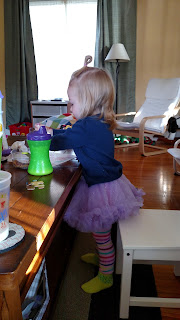 (Oh this girl and her style! She has currently decided that she only wants to wear dresses -- ones with tutus to be exact.  She only owns about 3 like this and they are summery.  So we have to layer her in leggings, long sleeve shirts or sweaters, and socks to keep her warm.) 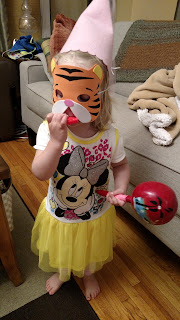 (Notice - another favorite dress! She's also recently picked up "dressing up" and will wear different hats or her tiger mask.  She also loves to make music and is found with various instruments - shaker, guitar, harmonica, kazoo, etc.  Oftentimes, she'll give Steve and myself instruments to play along with her while she plays and dances.) 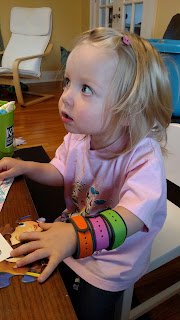 (Along with dress up, she's discovered bracelets and necklaces.  It's cute to watch her stroll into a room decked out in play jewelry that she's put all over herself.)

She has always been a pretty independent child.  She likes to go off and play with toys on her own, but has started to make sure that Momma & Daddy are nearby.  She especially likes it when we color ("color daddy?"), do puzzles ("puzzle momma?"), play "Momma/Daddy" with little figurines, and play in caves (throw a blanket over us).  She'd choose to play with us for hours if she could, but she's good about accepting limited play time with us, then goes off and plays on her own. 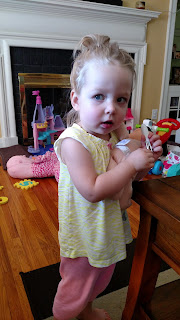 (Playing with her baby doll.) 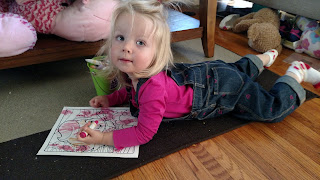 (She has a little table and chair set in the living room that she typically colors on.  However, her marker bin, papers, and chair often migrate over to the coffee table - better view of tv, ha!  And one time, she got very quiet while I was in the kitchen.  I came in to discover that she had moved her items to the floor and was deep in coloring!) She's becoming quite the little helper around the house, too.  Her favorite chore to help out with is unloading the utensils from the dishwasher.  She knows which drawers they go in and opens them up. Then she races back and forth from the dishwasher to throw the utensils in them.  It's an unorganized mess, but I appreciate the help.  I don't have to bend over to get the utensils out, I just have to quickly organize the drawer before closing.  She also has taken a liking to sweeping.  She'll drag the broom around the house and pretend she's cleaning the floor.  She tries to move the swiffer mop, too; but declares it, "too heavy".  She likes to use the duster too, but I don't think much dust is being taken care of. 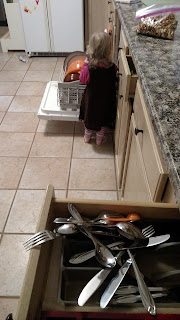 (Getting the utensils from the washer.) 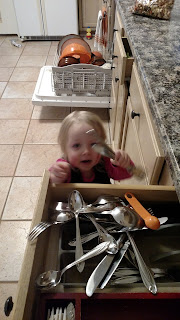 (Excitedly putting them in the drawer!)

Sleeping is going much better than it has.  She seems to go in spurts (usually coordinates with teething).  She's working on her last 3 molars coming in and they can't come in fast enough! We always can tell when one is working it's way up by her attitude and issues with sleeping (and the slobber and fingers constantly in her mouth).  Luckily, we are smarter about them coming in and haven't relived the weeks straight of no sleep like we did when her first set of molars came in earlier in the year.  Now, we just go ahead and give her some medicine around the clock and stay on top of the pain before it gets that bad. 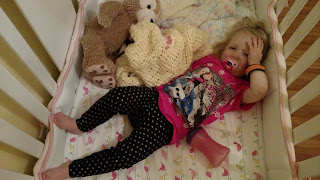 ("Get out of here Mom!"  -- something Bean gets from her dad - she HATES to get out of bed! Bean has been procrastinating her naps and ends up playing during the first part. I always make sure she is up by 4pm (she gets 1.5-2.5 hours of sleep).  Sometimes, I have to go in and wake her up and this is the face I got.  Most days, she's just sitting happily and playing with her bedtime collection.  When she wakes up, she just plays quietly, doesn't cry or call for me.  If we didn't have a video monitor, sometimes, I wouldn't know she's awake.) 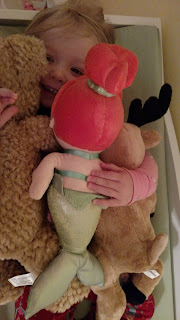 (Bean's stuffed animal collection has grown exponentially recently.  She used to only sleep with her glow worm and blanket in bed, but now, she has smuggled her Duffey Bear, Ariel Baby, and a reindeer in bed with her -- along with her glow worm, 2 blankets, and water cup.  I'm not quite sure how she has room to sleep in there, too! She also insists on holding all her items while being changed - as seen above. Makes for an interesting diaper change!) 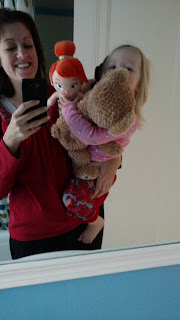 (She carries her collection from her bed downstairs to play in the mornings and after naps.  We then have to pick up Duffey, Ariel, and reindeer and take them back to bed.)

Eating on the other hand is a whole other story.  She's never been the best eater, but it has really gone down hill.  She hates to try new things and would rather martyr and not eat.  Her favorites still remain as mac'n'cheese, spaghetti, pizza, and cottage cheese.  We've also discovered that she'll eat tortillas with sour cream which helps to break up all that pasta! Another favorite is ketchup! She loves to use fries as a catalyst to just suck the ketchup.  Recently, she's been more about eating the fries and even devoured almost 2 chicken nuggets in 1 setting (that was a huge achievement!).  The only vegetable she'll eat (and ask for seconds and thirds) is carrots.  If it's a green vegetable, it is a guarantee that she won't even attempt to try it. She's pretty good with fruits, but it can be hit or miss.  Her most recent favorites are raspberries and bananas (she's lost her desire for grapes :-/).

She's always been more of a snacker and eats in small doses.  She loves to constantly snack on crackers and cheerios.  Her FAVORITE snack, however, is gummies (fruit snacks).  We've limited her to a pack a day, but if she had her way, it'd be the first thing she ate when she gets up.  She's started to take vitamins now which are also gummies.  At first, I snuck them into the fruit snakcs when I opened a pack, but now she asks for "gummies & 2 special gummies."  Breakfast is the easiest meal of the day - she eats a kids yogurt pouch followed by sharing a bagel/waffle/cereal/etc with me. 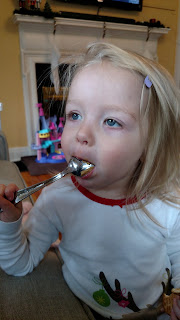 (Eating her new favorite snack -- peanut butter on a spoon!)

Her vocabulary (to me) is out of control. She does do a lot of repeating of words, but she also will say something to us and we have no idea where she got it.  She's either pieced stuff together from tv shows, or she's getting it from church.  Just yesterday I heard her singing "Twinkle Twinkle" and that's not a song I typically sing with her.  We usually sing "Row Row Row Your Boat", "Wheels on the Bus" and "Itsy Bitsy".  I'm also realizing how quickly she catches on to things.  Just this week, we introduced her to Rudolph, and now she's going around saying "Rudolph Red-Nose Reindeer.  Shiny nose!"  She also tries to sing "Frosty" and how he's happy.  But her favorite Christmas song is currently "Jingle Bells".  She runs around saying, "Jingle Bells.  Alllll the Waaaaaayyyyy!". 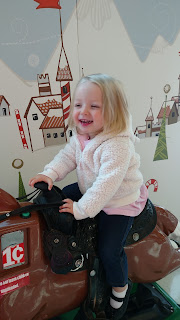 (She also has the whole grocery shopping figured out.  She gets a sucker while we shop and then rides the penny horse at the end.  When we get close to the registers, she immediately starts saying, "ride horse! ride horse!" Which is really funny because about 3 months ago she would cry about the horse and how she was afraid of it.  Now she gets on like a big girl, pushes the button by herself, and holds on.)

Next on the docket for her is to work on potty training.  She understands the concept and was terrified of the potty for awhile.  With some bribery and help of marshmallows, we are able to get her to sit on the potty for an extended period of time by singing songs.  However, she has yet to go into the potty.  Right now, I think she's more battling us because she wants to do things on her terms.  After the new year, we'll get serious about making it happen! We are also going to have to tackle her sleeping with her "packi" (pacifier).  She only uses it when she's in bed (or to sleep in the car on long trips).  I'm hoping these last few molars will come in and she won't miss sucking on it at night.
Posted by Unknown at 8:22 PM