About a month ago (finally starting to catch up!), we headed up north to Cleveland to visit some friends from college! Steve took Friday afternoon off, so we headed out after lunch and let Bean fall asleep in the car on the way.  We made a couple of bonus stops en route.  First stop was at the Carousel in Mansfield. Mansfield has a carousel factory that produces a lot of the hand painted horses for carousels around the US. It was an older carousel and Bean wasn't too sure of it (let's be honest, it was no Disney horse!).  There's some new law that only allows 1 person on a horse at a time, so I had to stand next to her and hold her. There wasn't any safety strap, either, and I think Bean was nervous up there.  We bought tickets for 2 rides, and we weren't sure if she'd want to do it again, but she did.  We then loaded back in the car and drove another 30 minutes to stop at Grandpa's Cheese Barn.

There, we were able to walk around a meat and cheese store and try out tons of different samples.  Bean especially loved the pretzel sticks that you were able to use to try the different cheese dips.  We ended up getting some Apple butter, cheese and sausage.  Then we stopped at the little cafe inside and bought a cookie and milkshake - yum! From there, we finished the last hour of the drive and arrived to our friends' house just before by late afternoon.

Their kids were still at Daycare and it just so happened to be a special daycare night known as "Parent Survival Night".  For $20, you were able to leave your kids at the daycare for the evening.  The kids were fed pizza, popcorn, and they got to watch movies while parents got to do WHATEVER WE WANTED!  Our friends were able to arrange for Bean to be a part of the daycare night, given us some glorious kid-free time with our friends!  We chose to just go out to dinner and head back to their place for some board games (did I mention KID FREE?!?!).  We went back out to pick up the kids and tuck them into bed - it was delightful!

The next morning, we slept in a little bit (which is a rarity with Bean).  Alice was up early and went out and got us some donuts - yum! After a lazy morning, we decided to go visit a car museum which also had a carousel for the kids.  The kids could have cared less about the cars (they were behind ropes and you couldn't touch or get in them), but they loved the carousel.  Then we discovered there was another addition to the museum that included a kids learning/activity area.  So we let the kids loose in there for a little bit so they could play with blocks, food in a little log cabin, and such.  There may have been some slight meltdowns over leaving, but a promise of pizza as the next stop kept the kids moving. 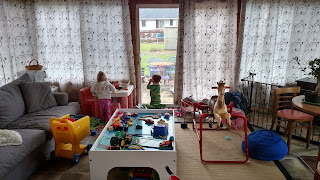 (The kids loved playing in the big play room.  Bean could've stayed in there for hours if we'd let her. It was a little cold when the fire place wasn't on, so we bundled the kids up and let them loose.  I'd sit in the warm living room and watch through the glass doors while they played - ha!) 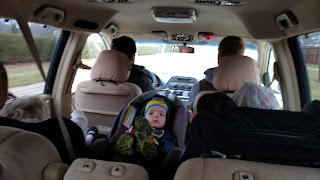 (All crammed in the van!  Mitch and Steve took the front, Bean and their two kids took the middle, while Alice and I shared the back.  We had to crawl in and out of the back -- raising and lowering the seat each time.) 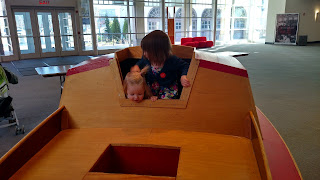 (Kids playing in a boat at the car museum.  This boat was used by a guy to cross the Atlantic - I think.  He lived in this little boat for a couple months during his journey.  Hard to fathom!)

We stopped for a late lunch/early dinner at our favorite pizza place - Dewey's! We ate way too much pizza and decided it was time to head back to their house.  Some of the kids fell asleep in the car.  It wasn't a long enough nap (they never are) but it worked.  Kids were able to run around and play for a little bit before we decided it was early bedtime for them all! Once the kids were in bed, we stayed up playing some more board games and watching a Queen concert on the tv (because that's how we roll). 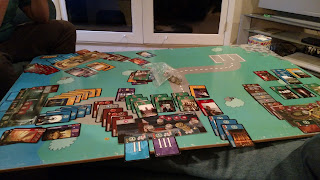 (Playing 7 Wonders -- It looks confusing, but it's a pretty easy game once you catch on. The first night we played games, we played on their kitchen table.  But the girls complained of the hard chairs for the second night and we got to play in the living room on the couches.  We had to make a makeshift table out of their ottoman.  The guys weren't keen on the set up -- had to reach the cards and not most practical.  But hey, at least we were on cushy seats?!) 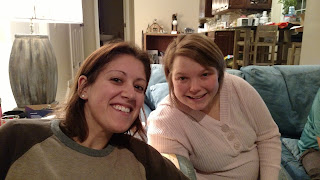 (One of the very few pictures I have with Alice! I love this lady.  She's such a delight in my life.  Looking forward to meeting their new little one soon!)

On Sunday morning, we packed up our stuff and headed out for brunch at Hudson's cafe.  On the way there, Steve and I realized that we had actually eaten at the cafe with his friend a few years ago while we were en route to New Jersey.  It was as good as we remembered it and we had a great breakfast!  We left our friends and started our trek back home.  We nearly ran out of gas on the way home, which caused a stressful 30 minutes in the car, but we finally found a gas station that was open and all was well.  We got home in time to put Bean down for her nap.  Steve had a to-do list including fixing our mower and raking leaves while I tried to keep order in the house.  We had a great weekend and look forward to the next visit!
Posted by Unknown at 10:03 AM