We headed to Cincinnati for Halloween weekend to spend some time with Steve's sister and her husband.  They have recently moved to a new neighborhood and there was a rumor that Halloween was an over-the-top affair with the neighbors.

We headed south on Saturday morning and met them for an early lunch. After lunch, we headed to EnterTRAINment Junction to look at a large indoor miniature train display.  Bean loved to push the buttons to make the trains go.  They had a Halloween craft area, a little maze you could walk through and get candy, and a big play place with tunnels and slides.  We had fun going through all the different activities and headed back to their house for nap time. 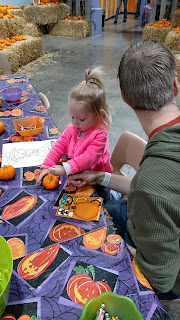 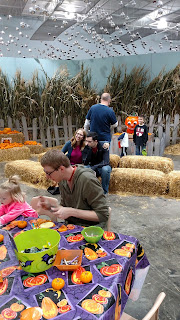 (She also got to color a page.) 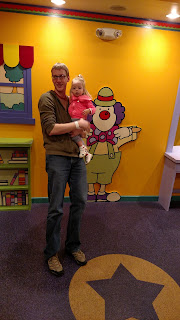 (Playing around in the fun house at EnterTRAINment junction.  They had these different maze rooms with themes - like space, fun house, mirrors, etc.  I think the adults had more fun than Bean in those rooms!)

We took it easy in the afternoon and built up the excitement for the trick-or-treating.   We ate a quick dinner and then put Bean back in her Orville (bird from the rescuers) costume.  Ashley was gonna take the first shift of trick-or-treaters while Scott, Steve, and I took Bean around to get some candy.  Scott ended up disappearing and Ashley met back up with us when we rounded the next street.  By house #3, Bean was a pro of going up, and saying, "tricks, treat".  Everyone thought she was dressed up as Amelia Earhart.  I guess Steve and I should've had our mouse costumes on to complete her ensemble.  Pretty soon, Bean's candy bag was getting very heavy and we called it quits.  We went back to sit with Scott while he passed out the rest of his candy.  Their neighborhood wasn't the over-the-top affair that we had expected, but it was still pretty good! All the neighbors just sat out in their yards with fire pits and had big buckets of candy next to them.  Some of the neighbors passed out snacks like cheese-its or fruit snacks, while others passed out whole candy bars; and a lot of the neighbors had separate candy options for little kids - like suckers and marshmallow treats. 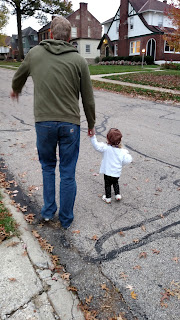 (Daddy taking Bean out to get some candy.) 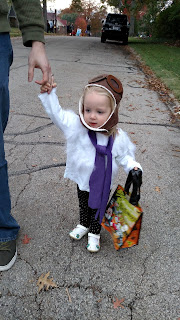 (She did great carrying her bag and asking for candy on her own!) 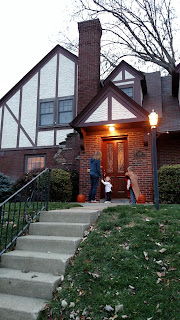 (Aunt Ashley took Bean up to some of the houses, too!) 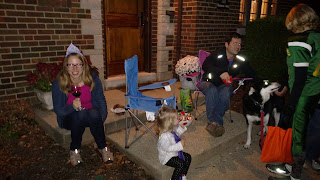 (We let Bean pick a couple of different things from her haul while we sat outside with Ashley, Scott, and Tyson!)

We had plans on Sunday morning to go out to breakfast at one of their favorite pancake places, but the wait ended up being too long.  Luckily, the weather was nice enough that we could go to a little coffee shop that sold waffles on Sunday morning only.  Only caveat was that they only had outdoor seating.  It ended up working out great! We said goodbye after lunch and headed back home.

We did do a stop at Ikea on our way home (did you think we could ever go to Cincy and not stop at Ikea?!).  Bean enjoyed the freedom of being able to run around and try out some of the furniture.  Things were going great until it was time to pick up the furniture boxes we needed (we bought a desk).  We had let her ride on the furniture cart, but needed her to get off for the boxes.  Huge meltdown began.  I ended up taking her away to sit by the little cafe while Steve checked out.  The meltdown ensued until I finally just had to take her out of the store - kicking & screaming the whole time.  She hadn't slept well the night before and I quickly realized she was teething a molar (anytime she has a huge meltdown like this, and sleep is a problem, it's because of teeth).  I had medicine in the car that I gave her (between the screaming).  And she finally calmed down.  I picked Steve and the furniture up at the cargo load and we hit the road.  Bean was out before we got on the highway.  She ended up taking an early nap, which made the rest of the day long (nothing some leaf playing couldn't solve), but the trip (okay, maybe the bag of candy for Momma/Daddy) was totally worth it!

Bean loved to help us rake leaves this year! She had a little hand rake that she'd pretend to use, but then she would just pick leaves out of our piles and throw them around.  We'd toss her in the pile, too. She loved it all: 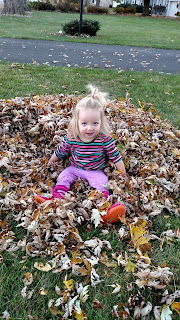 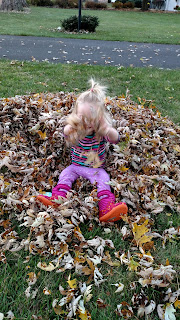 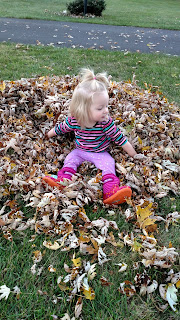 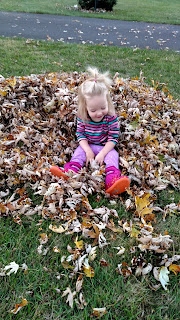 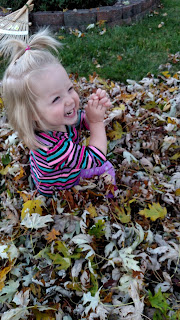