Steve is trying his hardest to keep our red Honda (named Ruby) around for as long as he can.  I on the other hand don't trust her as I once did.  When we went to Gatlinburg last year, she had some issues with randomly dying on us.  We got a new battery and Steve also replaced the ignition switch.  We haven't had any issues since then, but I question what will be the next thing to go out.  I think she has lived a good full life and she be limited to Lima driving only. However, Steve prefers to put more miles on her than the new car so we've been using her on our drives to Indiana.

Despite much love and care from Steve, Ruby has had some issues with rust and fading paint.  The entire roof is in dire need of a new paint job, but Steve decided to tackle the rust spots first.  (I was also informed that repainting the roof and just fixing/repainting the rust spots were two different techniques and he felt the rust was the more dire need).

He found some website online that walked him through all the different steps.  He had to un-attach the bumper from the sides of the car, sand down the rust to the bare metal, spray a rust eliminator, use Bondo, sand the Bond, primer, paint, and clear coat.  It's not perfect, but the rust has been stopped in those areas, furthering Ruby's life in our home. 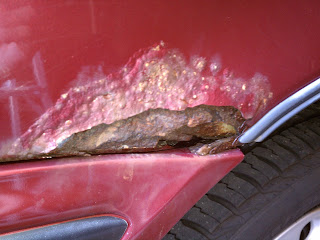 (This is the back right side of the car.  This area is the worst.  When we first noticed the rust a few years back, the paint was just bubbled.  We've watched the rust grow deep and finally pulled the trigger on the project.) 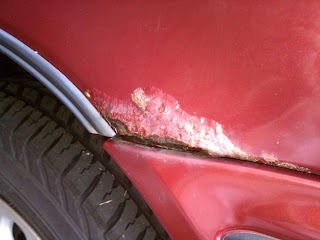 (This is the back left side of the car.  This is how the right side originally looked when we first noticed the rust.  Good thing Steve took care of it before the bumper fell off!) 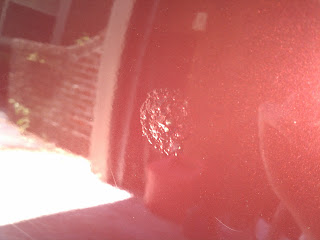 (This tiny spot is on the back right side close to where the big rust spot is located. Hahahaha, notice the reflection of the garage and brick wall.)

(Once Steve got the bumper detached from the area and sanded off the rusted metal, this is what he was left with.  He then sprayed the area with a rust eliminator and then coated it with a thick layer of Bondo (kind of like a paste that turns into fiberglass and fills in the holes and missing metal).  He then sanded the Bondo down and it feels just like the metal was never missing!) 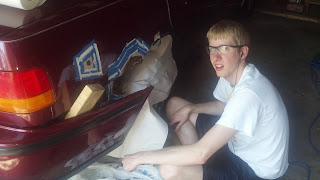 (Look at how safe he is -- safety glasses & ear plugs!  He also made sure to cover up the wheel and later the areas of the car that he didn't want the paint to get on.  It was too hard to take the entire bumper off, so he used that block of wood to prop the bumper away from the area he was working on.) 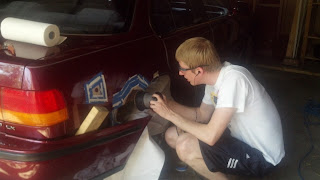 (Thanks Scott & Ash for the birthday sander!  It came it very handy with this project!) 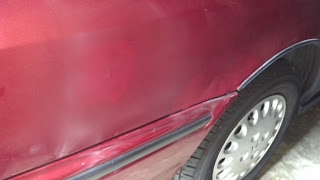 (Back Right side all finished!  If you see the car from a distance, you can't notice any difference.  However, up close you can see just some discoloration, and the area is also not as shiny as the rest of the car.) 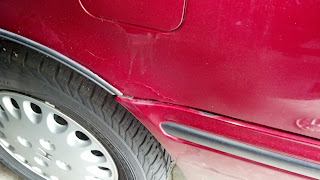 (Back left side of the car.  The main purpose of the project was to stop the rust from spreading and cosmetically cover the current spot.  All was accomplished and Steve did a great job!  He feels that he may be able to repaint the roof, but for now he's refocusing his energy onto house projects.)
Posted by Unknown at 2:33 PM