I put off painting the foyer for as long as I could.  I kept thinking of it as my nemesis because there is so much space and it covers 2 floors.  With Steve's help and an entire 5 days of work, our foyer is looking brand new!  I still have to do a little bit of the trim above the stairs and the fancy window trim.  To do these areas, I'm going to have to use the ladder on the stairs and it's going to be a 2 person job.  But for now, I'm just enjoying the new paint. 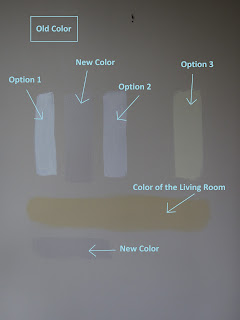 (I really liked the old color and had hoped to be able to find the same color and only have to spot paint in areas.  The color was very deceiving on the wall and after several wrong matches (options 1, 2 & 3), I finally found the closest match ("new color").  We lived for several weeks with all these random paint color marks around the area until I finally chose the color and decided to start painting.) 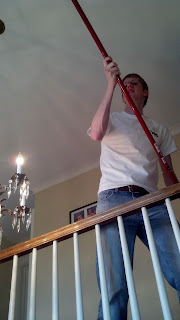 (We had to buy an extintion pole and edging tool to paint the area over the stairs.  Steve was a trooper and manned the pole while I worked on taping off and edging other ares.  Thank goodness for tall husbands!) 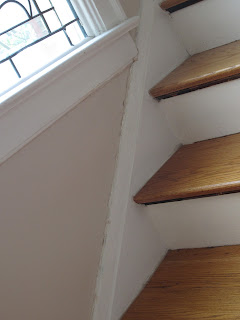 (The stair case was a disaster.  This picture doesn't really show the that the previous owner had used some sort of silicon caulk to edge the trim along the stairs/wall.  I had to peel out all the caulk, clean it up, use spackle to fill in the gap, sand, and repaint the area.) 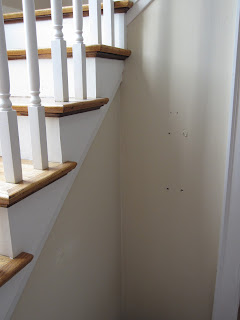 (There were lots of nails, screws, and anchors all around the area.  I took everything out and patched up the holes before painting.) 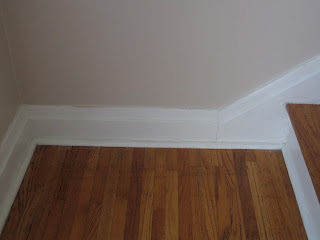 (Just like in the rest of the house, there was paint all over the trim, drips on the wood floor, and even different paint colors used for bad touch-ups.) 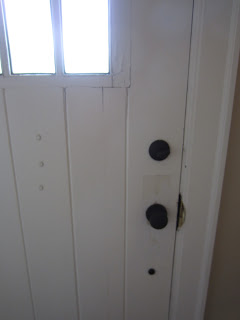 (The front door was atrocious.  There were lots of cracks -- that you could see through to the outside.  I did some patch-work when I changed out the locks, but never completed the job- until now!) 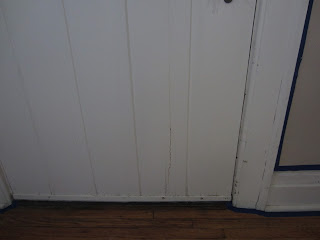 (Here is a close up of how horrible the door was.  You can see a big crack in the second panel from the right.  The trim was also dinged up pretty bad.) 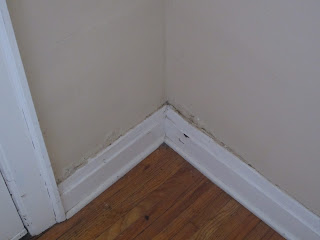 (This area is to the right of the front door.  There is some sort of damage to the wall and trim that made the plaster crumble and peel in the area.  I chiseled at it, cleaned it up, spackled, sanded, and repainted it.) 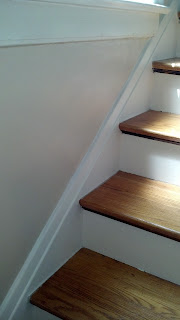 (Here is the trim by the stairs after all the repairs I completed.) 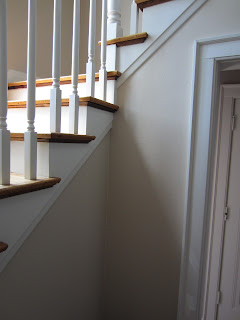 (The wall is all patched up and you'd never have known the previous owners had something hanging there.  You can also see the stairs look much cleaner and brighter.  I repainted all the white areas, but I still need to repaint the bars on the banister.) 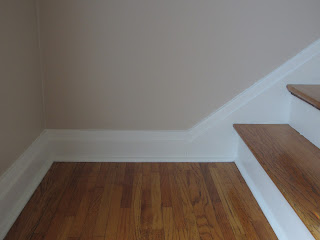 (The trim is all clean again!) 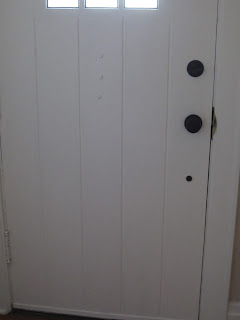 (The front door now appears to be solid.  You can no longer see through cracks, and it is all the same color again.  The door know now looks like it belongs there, too.) 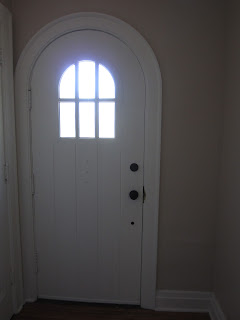 (We really like the shape of the front door and are glad that it won't need to be replaced.  The door jamb shows that there was possibly a different or even double doors in at one time.  Who knows.  The bottom right corner of the picture shows the area that had the damage.) 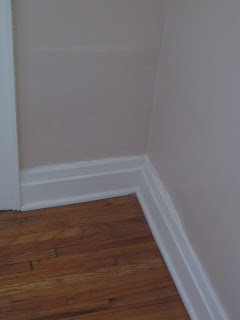 (Close-up of the damaged area.  You can still tell that there's something not right, but it looks way better than it did.) 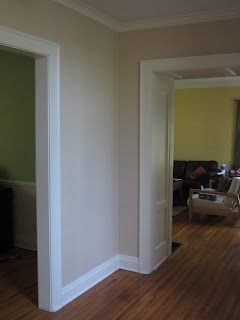 (A view of through the foyer and the connect dining room -- green -- and living room -- appears to be yellow but is really a gold/orange color.) 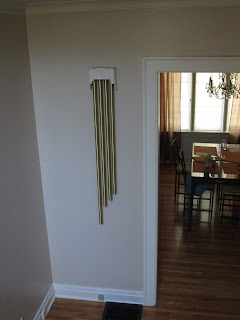 (Okay, so let me tell you about these chimes.  Months back, Steve and my brother-in-law Chris discovered that the original doorbell to the house was still installed.  Later on, my dad and Steve did some electrical work on it and added a new fuse and discovered that the plungers still worked!  The only thing was, we couldn't find the chimes.  Steve did some research and found a company online that sold chimes for $130.  We went back and forth on whether to buy them, but thought that it'd be a cool conversation piece and we have hopes of reconnecting the acutal doorbell buttons to the old system (it'll take more work to get it all working properly).  So we decided to buy the chimes.  After doing all the paint in the foyer, we finally unboxed the chimes (which had sat in the boxes for a month) and hung them up.  The chimes have been hanging now for a couple of weeks and guess what happened this weekend.  We found the ORIGINAL BLASTED CHIMES in our garage.  We had searched the entire house for these chimes.  All through the basement, in the crawl space in the attic, everywhere! -- Or so we thought.  I blame Steve since I found them leaned up against the wall right next to his car.  The original (okay, we don't know if they were THE original, just that they were obviously once used in the house) chimes are longer, silver, and are kind of beat up.  We like the look of the brass ones better (which is a good thing since we are past the 30 day return policy).  Oh well, who knows why it happened this way, but it did.  And we now have 2 sets of chimes.  Maybe we'll go crazy and switch them out for different seasons in the year.)