It was kind of crazy to get on the boat on Saturday, and reach our first destination Sunday morning.  It would have been nice to have a day at sea first, but that's not how it worked out.  So Father's Day morning, we got off the boat and walked through sketchy Nassau. 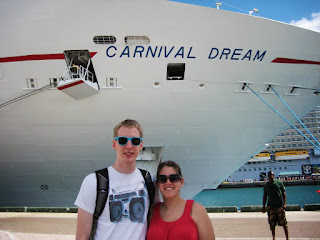 (First time to actually see the boat from the outside!)


I'm not really sure what you do in Nassau other than walk around and experience the culture.  There are tons of chotsky shops to buy Caribbean souvenirs and even a giant straw market.  In the straw market, women sell things they've made from straw and fabrics like dresses, purses, fans, etc.  You can buy things at the value they set, or barter with them to try to get better deals.  Mom was able to buy some things, I attempted but no one would take my offers- haha! 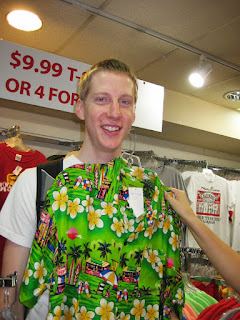 (In one of the chotsky shops -- Mom was trying to convince Steve & Dad to buy matching Caribbean shirts, but neither one would go for it.) 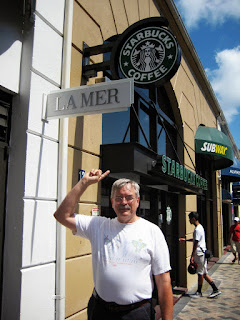 (While in the touristy area, Dad found his Starbucks.  He really debated on buying some hot coffee in the 80 degree weather.  In the end, the long line won out and he didn't get his coffee.)


After walking through the chotsky shops & straw market, we trusted Steve to navigate us on a walking tour. He had previously downloaded a pdf to his phone with a map and information of different historical sites.  My parents were exposed to what a real Ackerman vacation looks like & their eyes were opened.  Ha!  I don't think they were fully prepared for what a walking tour entailed.  I will have to admit that I too was uncomfortable at times.  Our tour took us off the main roads (which Carnival had specifically stated not to due to violence/threats).  But int he end, we saw a beautiful hidden gem in Nassau which took away some of it's sketchiness. 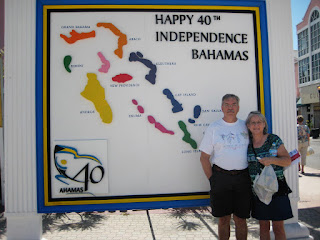 (First stop in the walking tour - the main square.  This picture was taken before Mom & Dad realized what Steve had planned for them. . . ) 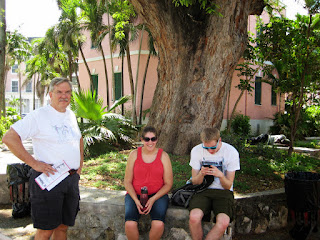 (En route to Steve's "Hidden Gem".  We had to stop and figure out where we were in the map and decide if it was worth walking to.  While sitting here, some lady tried to beg money off of us.  After Mom took this picture and we headed back on our journey, she realized there was a homeless man laying nearby- behind Steve in picture.  I think this is when Mom started to freak out about being in sketchy areas.) 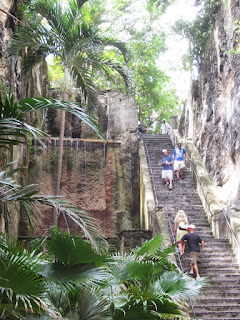 (Steve's "Hidden Gem" -- The Queen's Staircase.  These stairs were created by slaves in Queen Victoria's honor for her help in abolishing slavery.  It had really nice ambiance - that's a waterfall next to it -- and we all decided the sketchy walk was worth the visit.) 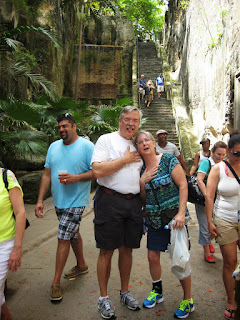 (They are holding their hearts because they weren't sure they'd make it - either because it was a long, hot trek uphill or because they thought we'd get jumped by the locals never to be heard of again - haha) 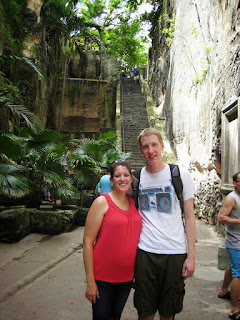 
We got back on the boat in the afternoon and lounged around until dinner.  This was the first formal dinner on the ship.  We got ready early and took some formal photos before making our way to the dinner.  Our waiters (who were just amazing and entertained more than they served) got my birthday wrong and gave me a birthday dessert on this night.  They even sang a really good "barber shop" version of Happy Birthday.  They then proceeded to bring several desserts out all for me!  Then they brought everyone else's 1 dessert - ha!  After dinner, we headed to a show and then off to bed.  The entertainment/shows on the boat were okay, nothing too special or to rave about; but we still enjoyed them! 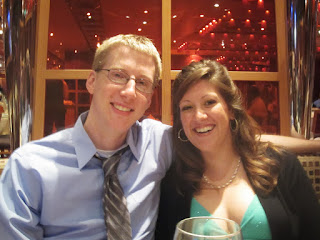 (Dressed up for Formal Dinner!) 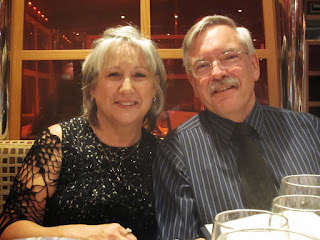 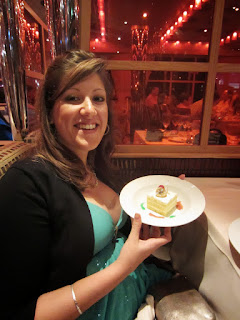 (My birthday cake!  This was presented to me while the waiters sang Happy Birthday.) 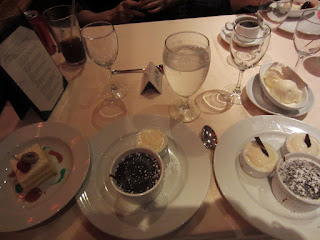 (I had ordered a melting cake for dessert.  Then they did the birthday presentation and brought me the cake. Then the melting cake I ordered showed up with another melting cake!  They just kept bringing out desserts for just me.  Finally everyone else's showed up.  They said I had to eat it all, but that didn't happen. I think Steve took one of those melting cakes - haha!)


Monday was my actual birthday and it corresponded with our first day at sea.  Mom and I found 2 loungers in the sun and tanned for awhile; while Dad & Steve sat in the shade in another section and read.  We met back together for a late lunch. Then we headed to a music trivia contest, get instructions for a week long murder mystery puzzle, and learned a super secret dance to be revealed Flash Mob style later in the cruise.  Our day wrapped up with another dinner (this time our waiters became dancers for entertainment) and a juggling show. 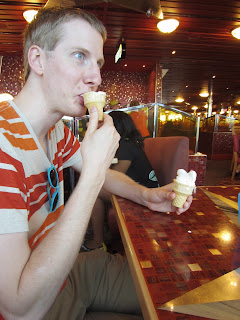 (These are the first of many ice cream cones consumed by Steve.  He would even make trips specifically to the Lido deck just to get ice cream.  In one day, I lost count when he hit 7 cones.  I'm also pretty sure he ate a lot of cones when I wasn't around.) 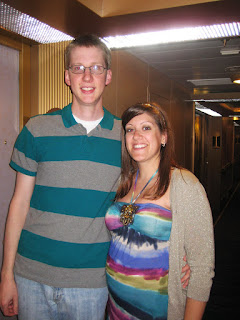 (Me in my hippy look - as Steve called it - I think we were headed to dinner.) 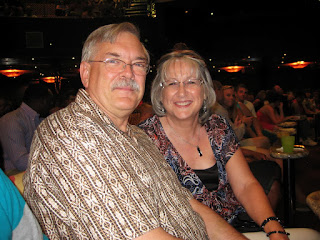 (Waiting for the juggling show!  The guy was good, but pretty quick into his routine, we all realized we'd seen him before on our previous cruises!  Steve and I went on the Carnival Legened for our honeymoon back in 2009.  A few months after our trip, my parents did the exact same cruise we had done!)
Posted by Unknown at 12:21 PM