Usually, cruise ships dock into port by 7 or 8 am and begin the unloading process.  They dock so early because they have to get all the previous cruises off the ship in and prepare for the next round of cruises that begin loading around 11am or noon.  Due to the medical emergency, we didn't get into port until after 10am.

The whole unloading process wasn't well explained with the time delay.  There was a channel on the tv that explained the unloading procedures, but no one was sure if the times changed because of the delay.  We decided to stick with what the video said and left our room with all our suitcases around 8.  We made our way to the theater lounge and found an area to store all our suitcases, sit, and wait out the morning.  Mom stayed with the luggage and the rest of us headed to the Lido deck to grab some breakfast.  It was of course packed so we found some quick lines (like for pastries & fruit) and ate our little breakfast.  I brought some food back for mom when we were done.  The wait really didn't seem too long and before we knew it, we were docked in Port Canaveral.

Things got a little dicey on what to do after that.  There were announcements saying they wanted to unload those with early flights first, and then they'd unload according to the area you were waiting.  However, there were never any announcements after that.  People in the theater lounge began shuffling around and making their way to the door, so we followed suit per Steve and Dad's encouragement.  We had an 8 hour car ride slated for the day & Dad was ready to get on the road!  Good thing we were seated where we were and got up when we did, because we got off the ship pretty quickly.

After going through customs (and Steve breaking a suitcase, which was already broken, so I shouldn't blame him), we walked to the bus to take us to our car.  Once the bus was loaded, we made it to the parking place, loaded up our car, and was on the road around noon.  Pretty good timing!  Only there was one problem in the whole drive 8 hours to our hotel in TN -- every time dad hit the breaks, we heard this gnarly sound coming from the passenger front tire.  Uh oh! 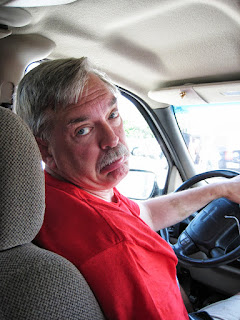 (I don't know if he's more sad about leaving the ship, or the 16 hour drive ahead with an impending break pad change.) 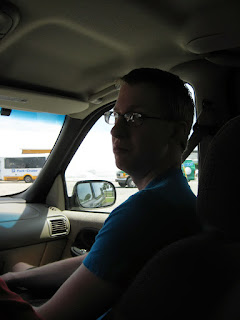 (Steve is sad for no more 24/7 ice cream cones.  Which by the way, I got him his last one that morning when Mom and I made a trip to the Lido deck while waiting to depart.) 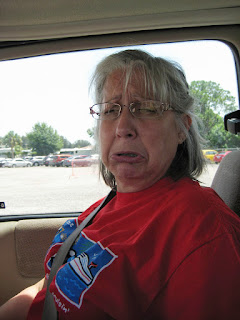 (Mom is sad for the reality she is return home to - hahahahahaha!  Her's are real tears, okay I kid, I kid!) 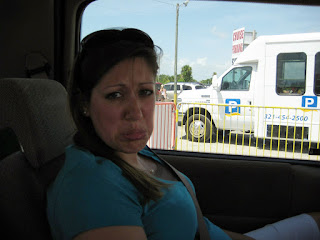 (Sad about leaving the boat and having to sit in a confined space for the next 8 hours to turn around and do it again the next day.)


Good thing we had 2 mechanics in the car.  Both immediately knew it was the break pad.  Neither seemed too concerned over the sound (as they said it didn't sound like metal on metal yet), but Mom & I weren't buying it!  Dad decided that the situation wasn't dire and that sometime in the afternoon, we'd stop at a car parts store and they'd fix it.

When the time came, the stop was relatively easy and quick! Within in an hour (maybe even less), the new parts were purchased, Steve & Dad took the wheel off, put on the new break pad & rotor, Mom & I repacked suitcases for that night's hotel stop, we loaded the car back up, and were off!  We made it to our hotel by 10pm! 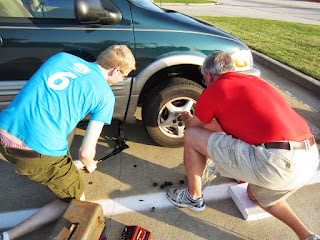 (Have I said how amazing it is to road trip with 2 mechanics?!) 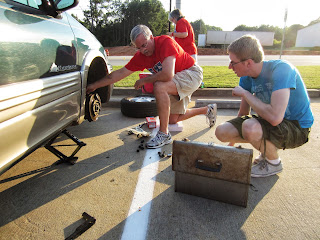 (Check out that tool box!  My parents' van is older and has always had weird issues pop up every now and then.  Dad was smart and decided to throw his tool box in the back, "just in case".  Thank goodness!  Made the stop quicker having his own tools to use.) 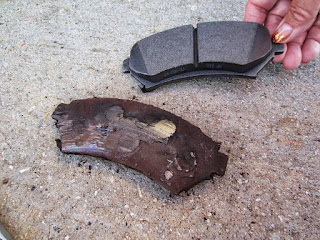 (Here is a shot of the worn break pad, and the new one.  Notice how there is no pad left!  What?!  That was stopping the car?!  On a funny note -- I see a hidden Mickey!) 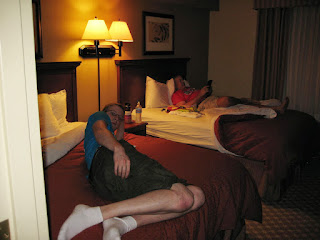 
The next morning, we had a later start than planned because Steve & I didn't set an alarm.  Ha!  We all slept in the same room again and we assumed we'd wake up when Mom & Dad were up.  But I guess our ear plugs did too good of a job!  Ooops :).  After eating a quick breakfast, we were back on the road.  It just so happened that we were passing through Corbin, KY right around lunch time.  Many people (Steve included) don't understand the perfectness of this timing.  Corbin is home to the original Sanders Cafe, which is now opened all across the US as KFC!

My grandpa is from the Virginia/KY area.  When I was younger, we would make trips to the area and would stop at the Sanders Cafe to pay homage to the Colonel - haha!  Steve was pretty skeptical of the stop until we got out and he realized that it was literally a National Landmark!  The Sanders Cafe still has the original kitchen were Sanders made his chicken for the first time, bed room models from the inn that was associated with the cafe, and all sorts of memorabilia around the cafe.  We of course feasted on a wonderful chicken meal before heading back on the road. 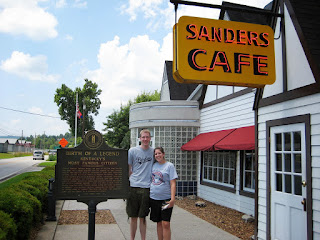 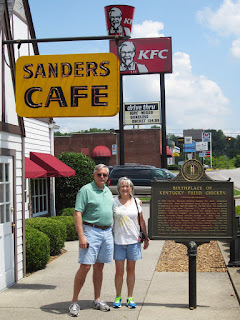 (The Cafe was half original and half a KFC.  You ordered the food in the KFC portion, and ate in the Cafe. Pretty neat!) 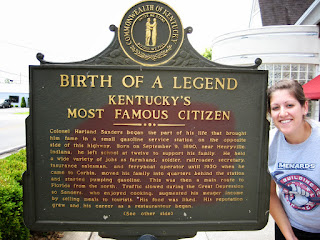 (Steve said this is what made the whole experience legit! That and the Asian tourists.) 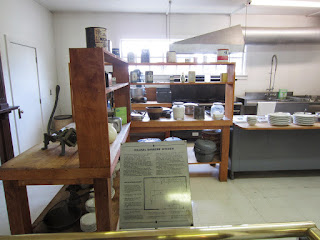 (The original kitchen, where all the magic started.) 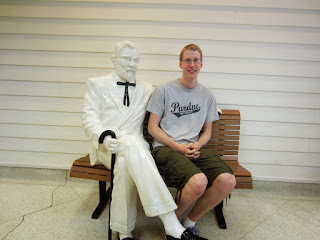 (It's not an official trip until you sit next to the Colonel.)

The rest of the journey was uneventful.  We made a pit stop in Cincinnati where the first driver change of the entire journey was made - ha!  Dad was able to take a little nap while Steve got us to our house.  We were home by 6pm, but Mom & Dad still had a 3 hour drive back to IN!  We quickly unloaded our stuff, said our goodbyes, and waved our cruise buddies off as they finished their journey home.  They made great time and were home by 9!

We had an absolutely fabulous vacation!  It was really hard to return home to the reality of a house that needed attention and work for Steve.  We have a few other smaller trips planned in the summer (like a visit to IN for my first baby shower and a visit to NJ to see Steve's family & another little shower!). But the next big thing on our horizon is Baby's arrival!  Can't believe we're than 3 months away from meeting her!  We have so much yet to get done!  I'm currently working on the nursery in preparation for it to be bombarded with all the baby stuff headed this way :)!
Posted by Unknown at 11:08 AM