It's been hard to get back into blogging when I look back and all the previous posts are full of the Caribbean, sand, and fun.  For me, coming back from the cruise, I kicked into baby mode.  I've made the nursery a priority and will be posting on its progress soon.  For Steve, he returned from the cruise in project mode -- realizing all that needs to get done around the house before winter (and responsibilities of being a dad kick in!).  He has a pretty lofty list of items to get done before the end of summer (anyone want to come help?!) but first off was fixing the garbage disposal.

Ours decided to crap out at the beginning of June.  We lasted as long as we could without one.  Then, Steve ordered a new one and installed it all by himself (okay, maybe dad gave some advice before he switched them out). 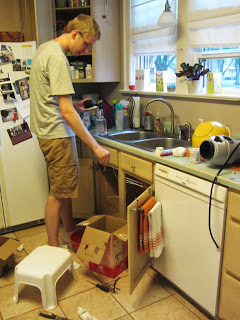 (Look at that handyman!  Who would've thought Steve would add garbage disposal repairman to his never-ending list of accomplishments?)

We had an unexpected event occur which added another "house item" onto the to-do list -- a flood in the basement!  Ahhhhhhh!  We have a sump pump -- remember our sump pump woes? -- that probably kicks on way more than a sump pump should have to kick on.  However, we figured out there's some plumbing done wrong in the basement which is a big factor in that, but that wasn't the issue in the flood.

While sitting and watching the evening news before bed, we both realized that the sump pump was kicking on quite a bit and almost running constantly.  We looked outside and saw that it was raining like crazy!  We didn't think much about it since we could hear the sump pump and just assumed all was working fine.  I went up to bed to get ready until I heard Steve yelling for help (around 11pm) in the basement.  I ran downstairs (ever so careful as to not trip) to find lots of water in our basement!  We put shoes on, unplugged the deep freezer (luckily our heater/ac unit was off), and set to work on moving items out of the "flood zone".

It's hard to capture/explain how are basement is set up.  It's divided into 4 areas/rooms.  First you walk down the stairs into the opening of the basement.  This leads to the right into the laundry room, or you can go straight through a doorway into a room that houses our deep freezer, water heater, and ac/heater system.  You can continue through that room to access a storage room to the left.

When we first discovered the water, it was mainly by the stairs and in the central room with the ac/heater system. Most of our items were stored in this room as well, but I'm a genius and had everything stored into totes (okay, I'm not a genuis, but watched my mom learn the hard way when our basement flooded growing up).  The only thing not in totes was the christmas tree and all the boxes I had saved up from our moves.  The christmas tree box was slightly wet.  I examined it after we moved it to the dry area in our laundry room and the tree itself was fine.  The box, however, didn't make it.

After all our items were shifted to dry areas, we set to work getting the water out, but we weren't sure what was the best option. While trying to figure out what to do, we noticed that the water level was still rising.  At some point, we checked outside and the rain had stopped.  When the rain stopped, the water level didn't rise anymore, but wasn't going down much at all.

Steve ended up using the wet/dry vac to suck up water in the stairs room.  Our sump pump is located off the laundry room, but was sealed under plexiglass, making it hard to get water into the well (we figured out later that the drains in the other rooms failed, had they not, the water would have just drained into the well that way).  After Steve pried up the plexiglass in the corners, I discovered that I could "paddle" the water through a hole in the flooded room which would go into the well and be pushed out with the sump pump.

We worked like this for an hour or so and finally called it quits when the water was semi contained in the flooded room.  Luckily, Steve was able to call off work the next day, so we slept in and tried to avoid the disaster area as long as we could.  When we finally went to work in the basement, the water level had lowered from the night before, but there was still an area that needed bailed out.  I started sweeping up debris (water got into our dryer duct so there was lint everywhere, not to mentioned dirt and crud from the drains) while Steve finished the water with the wet vac.

It ended up raining the next day, but our basement was fine.  All we can figure was that it was a combination of a slow working sump pump, too much rain too fast, and a possible clog in the drain.  For now, we just continue to cross our fingers it doesn't happen again (and ignore all the dirt that still needs swept down there!).  What could have been an absolute disaster ended up being just an unexpected mess.  Our only "lost items" were my collection of moving boxes.  Now I just have to find the motivation to finish cleaning it up and put everything back where it is supposed to be! 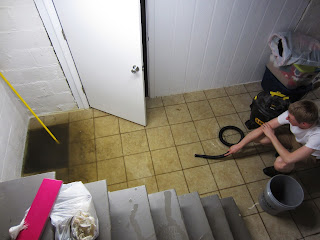 (The pictures are deceiving, but there's about 1/2"-1" of water in this section.) 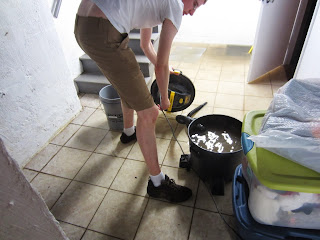 (For some reason, the wet vac would leak once it was full.  To make things easier, Steve would pour the water into my handy-dandy Menard's bucket - had to make a shout out to our favorite hardware store - and would then dump the water into our utility basin which would drain into the well for the sump pump.) 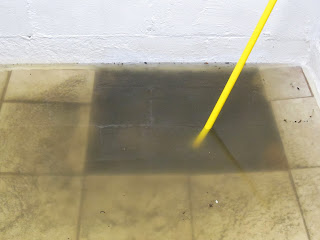 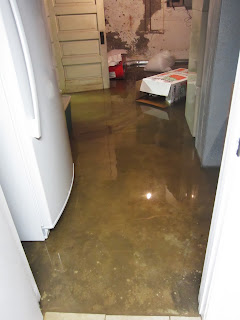 (This is the main room that had all the water.  Our deep freezer is to the left - luckily only a little bit of water got under it, but we went ahead and unplugged and moved its contents upstairs - while the ac/heater system is to the right.  The door in the back leads to the extra storage room on the left!) 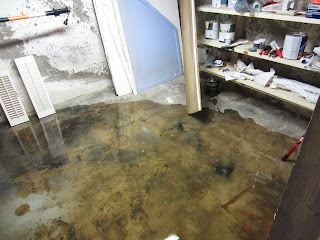 (When we first started moving things, this storage room was dry.  However, water slowly leaked into it from the adjacent main room.  I never mentioned that our entire basement floor is not level.  Some areas are higher than others which attributed to the way the water spread out.) 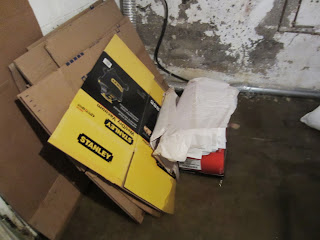 (I had to include a picture of my beloved moving boxes which are no more.  You served us well fellows.) 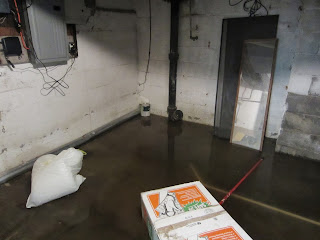 (The main room that got flooded.  This is the area with the deepest water.  My guess was that at the lowest point where the drain failed, the level was 5".) 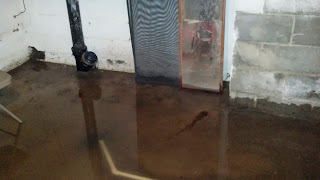 (A closeup of the deep area after over an hour of "bailing out water".  I sat in the folding chair that you can barely see on the left, used a tote lid, and paddled water into that whole in the corner.  On the other side of that hole is the sump pump.  Click here to see what the sump pump area looks like!  Notice the water level marking on the cinder block to the right.  A few inches down, and a few more to go!  We called it quits right around this picture.  When we got up in the morning, there was a 3' diameter circle around the drain in this picture - at the end of the white pipe.)
Posted by Unknown at 9:26 PM