Steve's grandparents live in New Jersey very close to Ocean City.  We try to make a trip out there way at least once a year to visit the family.  The best time of year is of course to go during the summer in order to enjoy the beautiful beach and strolling along the board walk.  We were able to take an extended weekend just a few weeks ago and visit his grandparents along with his mom, dad, sister, brother-in-law, and an aunt from California.  While we were there, his uncle, aunt, and cousins who also live nearby came up for a few days as well.  Nanny & Poppy had quite the full house, but we all had a great time getting to see each other!

On Saturday morning, we met Scott & Ashley (Steve's brother-in-law & sister) in Dayton and flew on the same flight to Philly.  We rented a car and drove the final 1.5 hour to Nanny & Poppy's house.  After a quick lunch we met up with the rest of the family who were already staked out at the beach.  We spent the afternoon enjoying the beautiful weather until it was time to head back to his grandparents' house.

On Sunday morning, Steve's mom threw me a baby shower brunch at a local deli.  The food, company, gifts, and getting to celebrate our Bean was perfect!  I had a great time and was overwhelmed with the wonderful gifts we got.  Between the shower my mom put together, and the brunch shower from Steve's mom, I'm finally feeling like we almost have everything to take care of baby.  We still have some major purchases to make, but we've received gift cards to go towards those items.

After the brunch, the girls all met up with the guys who were already back at the beach.  We spent another relaxing afternoon at the beach until weather began to come in.  After returning to his grandparents', everyone waiting their turn in the shower, and a traditional dinner of Manco & Manco Pizza (formerly known as Mack & Manco Pizza), we headed out for an evening at the boardwalk.  We walked around (sometimes I sat on a bench while others walked), hit up our favorite taffy store - Shriver's, and bought a funnel cake.  Yum!

The rest of the trip was spent either visiting with his grandparents, visiting the beach, or just hanging out with the family.  While we were all together, we were all able to show our different vacation photos and videos and catch up.  What a fun weekend!

Here are pictures I stole off facebook from Steve's mom & aunt from the Baby Shower Brunch: 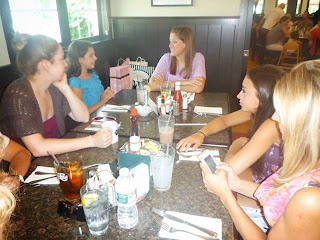 (Hanging out at Fitzpatrick's Deli waiting on our food.) 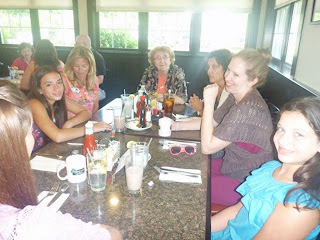 (Other side of the table) 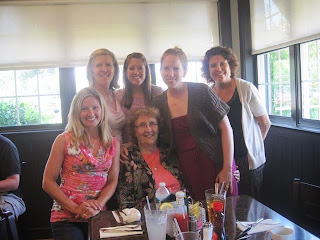 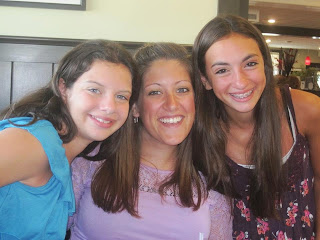 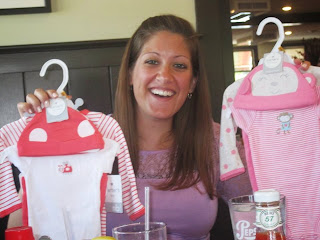 (Cute baby clothes!  We also got the monitors we had registered for, sleep sack for baby, nursing cover, and had the baby jumper waiting for us upon our return from Jersey.  A stroller is also going to be showing up soon :).  Thanks everyone for the fabulous baby items!)
Posted by Unknown at 4:19 PM