We were all especially excited for the last day at sea, despite the fact that it was in fact our last cruise day.  We were excited because this was the day that our super secret "flash mob" dance was going to be revealed.  There was a dance party planned out on deck in the afternoon to raise some funds for St. Jude Children's Hospital.  After the planned dance party was our flash mob dance.

We headed to breakfast first and ran through our dance moves one more time.  We then changed into our bathing suits and headed out to the main deck area to stake out seats for the afternoon. 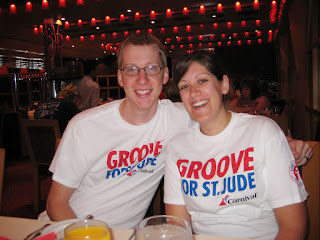 (One of the few times Steve will willingly wear a matching shirt.  Here we are at breakfast.  I was impressed he wore the shirt all day long and not just for the dance - show's his commitment to the flash mob dance!  We were prepped and ready for our flash mob - we were encouraged to wear these shirts as all the crew involved in the dance would have them on, too.) 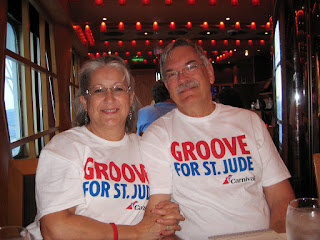 (Our other flash mob buddies!  During the Groove for St. Jude dance party, you could buy the tshirts and Carnival would match the profits from the sales to donate to the hospital.  We had insider info from the dance class as to where to buy the shirts in advance to be fully prepared for the afternoon.Thanks Mom & Dad for the shirts!)

Steve and Dad hung out in the shade at a table while mom and I found spots on the edge of the pool to enjoy the sun while being cooled by the water.  As the dance party got closer, we made our up to the table to dry off.  While we were sitting at the table, they announced they were going to do an "Ultimate Dream Couple" contest first.  They were having a tough time getting participants so after some prodding, mom and dad entered the contest!

The contest started with 6 couples and was split into 3 stages.  Stage one consisted of a balloon contest in which balloons had to be blown up and popped in a certain order.  The top 4 couples continued onto stage 2 which was a scavenger hunt.  Then lastly, the top 3 couples competed in a Tarzan/Jane reenactment.  I was concerned over the balloon portion of the contest just because mom had a bum ankle (she had broken it back in April and was still dealing with weakness in it).  I knew if they could get through that, they'd have a fighting chance.  Not only did they get through stage 1, but they were the first couple to successfully pop all their balloons!

The scavenger hunt consisted of finding as many things off a list they were given in 5 minutes. The list included things like goggles, ice cream cone, sunscreen, guy with abs, lady with a sunburn, sandals & socks combo, a baby, etc.  It was neat to watch the crowd throw out items to mom and dad & volunteer themselves to participate.  A teenager walked up to Mom and said, "Need a guy with abs?  My family is rooting for you and I happen to have some!"    I of course immediately met up with Mom to volunteer my baby!  We weren't sure if they'd count Bean, but after a quick pause, the MC gave mom & dad the point!  (We secretly think the MC wanted mom & dad to win.  They were the longest married couple - actually they may have been the only married couple.) 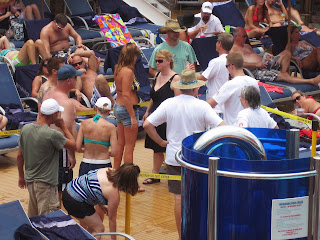 (Standing in the assigned area with the other couples as they awaited their instructions for the next stage.)

Stage 3 was all about acting and hamming it up - 2 things my dad is great at!  Mom did her best at being a distressed Jane while Dad did a great Tarzan yell, crawled through the jungle (he slid over and under a bench), "swam" through the river (he literally splashed in the nearby pool), battled an anaconda (wrestled a towel), and dipped Jane, laying a big victory kiss on her.  It was obvious by the audience (and Dad's well use of surroundings) that Mom & Dad were the clear winners.  The MC then did a vote according to cheers and sure enough, Mom & Dad were deemed "Mr. & Mrs. Ultimate Dream".  Which by the way, people recognized them later throughout the day and all the fame went to their heads - haha!

After a brief victory rest, Mom & I returned to the deck to participate in the Groove for St. Jude dance party.  After that wrapped up, we staked out our spots and pretended to be bystanders while we waited for our cue to start dancing!  This was probably the highlight of our trip!  Dad was the perfect leader in making sure that Steve and I knew all the moves.  Mom was excellent in her taping skills (which helped us in  all the practicing) and captured the flash mob dance!  I wasn't sure Steve was going to be up for doing it, but he did and we had a blast!  Not gonna lie, we both still randomly break out our dance moves around the house. 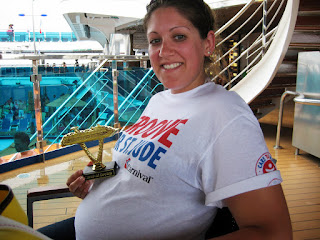 (During our brief rest, Mom wanted a picture with Bean & their cruise trophy.  Mom was convinced the bean clenched the title for them.  We do what we can for the Dream couple!) 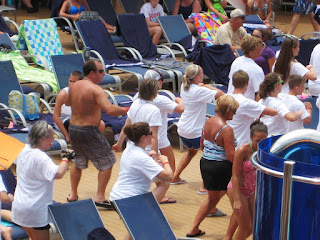 (Mom & I grooving for St. Jude.  We danced to songs like Cupid Shuffle & Cha Cha Slide.)

After an afternoon full of dancing, and deck shenanigans, it was time to return to our rooms and begin the dreaded packing.  By afternoon, the captain had announced that after the previous day's events, we would only get into port a couple hours late!  Carnival opened up all the phone lines for people to make new travel arrangements.  After getting a lot packed, we got ready for the evening and headed to our last dinner on the cruise :-(. 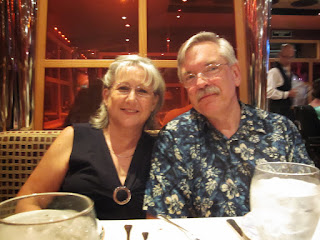 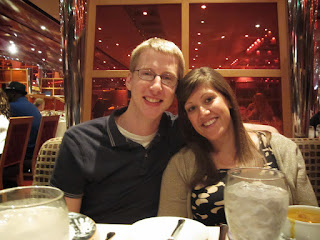 (Can you tell how tired I am?!  All that dancing wore me out!) 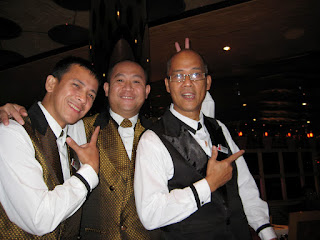 (Our fabulous waiters - Roberto, Arthur, & Fernando.  Fernando was the head waiter.  He typically would make sure everything was going well with dinner and would take our orders.  Roberto was next in line and would take our orders, would bring us food, and make sure we always had water.  Arthur was the "food runner".  He'd get the food from the kitchen, sometimes would bring it to us and always kept us stocked with bread.  The three of them worked well together and providing constant entertainment.  As a thank you, we got them matching tshirts from St. Thomas and gave it to them -- a tradition Mom & Dad started back on one of their first cruises!) 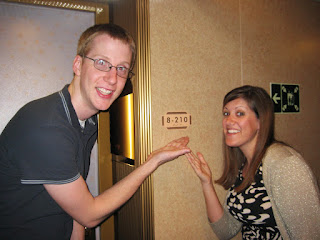 (Can you tell the excitement in memorializing our room number?  We got lucky to end up with 2 rooms right next to each other since we booked so late.  I think we ended up with excellent rooms.  They were the last ones in the hall all the way at the front of the ship.  We did feel like we did a lot of walking back and forth through the ship, but it was inevitable since the restaurant and theater were on opposite ends.) 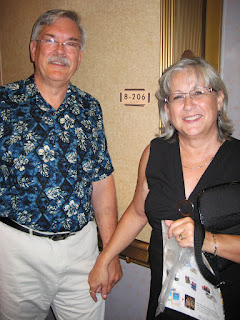 (Our crazy, I mean wonderful neighbors!  Okay, but seriously.  Lots of people probably think - why on earth would you go on a cruise with your parents?  It's as simple as this - they are wonderful parents, fun travel mates, and some of our best friends.  We look forward to the next vacation with our Cruise Buddies!)
Posted by Unknown at 12:39 PM