I LOVE my Droid 4 cell phone.  I never realized how much I relied on it and loved it, until it crapped out :-(.  I can't blame one specific event as to why it no longer works.  Although, I do remember having a thought of "I'm really lucky the screen didn't just shatter."

It was working fine, until one evening I noticed that when I tried to touch "send" on the screen, it wouldn't recognize my touch.  I didn't think much about it, since I could just hit enter on the keyboard (that's right, I am one of those people who uses a slide out keyboard - and good thing I did!).  The next day, I noticed that the screen wouldn't swipe properly and I couldn't get into some aps, but then it would randomly work.  I was able to take off some of the features (like swiping to unlock the screen) just in time, because by noon, I had lost complete touchability on the screen!  I could text and make phone calls by navigating the screen via the keyboard.  However, once I was in the text or dialer aps, I had to turn the phone off and back on to switch back to the other ap.  It got really annoying really quickly (especially since I was expecting a pretty important phone call).  I could dial out, but I couldn't answer calls because that required a screen swipe.  Luckily, when I got the call I was waiting for, my screen randomly worked - crazy!

I had hope that maybe it would just all come back and fix itself, but by evening it was very obvious I was losing my best friend - ha!  With the warranty out of date, we were on our own to figure out what to do.  My immediate solution to the phone issue was to reactivate my old LG Ally.  I now remember why I got the new Droid 4, because the Ally was out of date, couldn't really handle many aps.  But, I need a phone and am able to text/call on it.  I just had to accept that I would no longer be able to have access to facebook 24/7 (since the facebook ap was too big and constantly crashed the phone - 1st world problems. . . ).

Steve did some research for the Droid4 and thought he knew the problem.  He ordered the part that he thought was the issue.  In a few days, the part showed up and Steve went to work on repairing the phone. 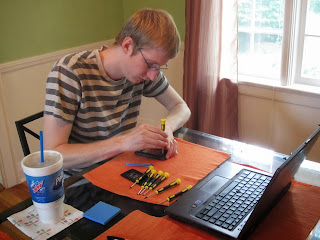 (Along with ordering the new part, he had to order some very specific cell phone tools.  All together it ended up being a $50 gamble.  He had a video tutorial that he had to watch in order to take the phone apart piece by piece.) 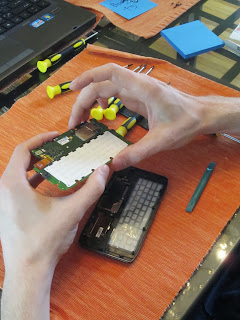 (A sight no one should ever see -- the inner workings of a cell phone!  Scary!) 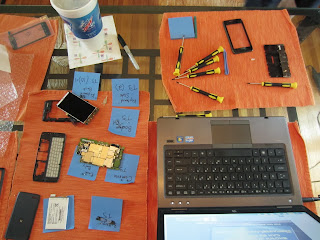 (A pretty scary sight - my phone in pieces laying all over the dinner table.  The old part that was being replaced is the screen seen in the middle of the orange mat on the top right.  The new piece is wrapped in plastic in the upper left corner of the picture.  I do have to brag on Steve not only for his skills in researching what to do and being able to do it, but I was amazed to see the use of the sticky notes.  He would label each piece as it came off the phone and would put it in a certain order so he'd know how to put it back -- a process he came up with on his own.  Not many people think about that!)

He spent an entire 4 hours taking the phone completely apart to replace the 1 piece (which was of course the last piece you get to) that appeared to be the cause.  He put the phone all back together, powered it up, and. . . the touchability of the screen still didn't work :-/.  In a last ditch effort, I did a hard reset, but that just made the phone no longer able to be used since it's stuck on a screen that requires touching options (keyboard can't navigate it).

So for now, I'm still using the Ally and don't use my amazing data plan that I have.  When I'm out of the house, I'll turn the data on just in case Steve needs to get with me (he can't use his cell phone at work - no service - so we communicate via emails and chat).  When I'm in the house, I just rely on our tablet for constant internet communication.  My current plan isn't up until April.  I really really really really want a new phone with a slide-out keyboard, but husband is trying to convince me that I need to invest in a really good phone since I rely so heavily on it (I like to remind him that having a keyboard on the Droid 4 allowed me to use it a little longer when the screen lost touchability).  I'm debating on investing in a used phone to get me to April (so I can take better advantage of my data plan) or just to hold out with my access to limited data until April and invest in a really good phone at that time.  I will most likely give in and invest in a lesser phone for now.  We'll see.  Anyone have a 4g capable Android phone they aren't using or want to sell for cheap??  It's worth a shot, right?

**So I wrote this post a few days ago and was still in a debate on what to do.  Yesterday, the camera feature quit working on the Ally.  In order to be able to bombard friends and family with constant/instant pictures of Bean when she's born, I have decided a new phone is a must.  Hopefully, I'll get a good deal and have a new phone in the next week or so.
Posted by Unknown at 9:38 AM