With it really feeling like crunch time around here, we've been super productive getting ready for baby.  This past weekend, we finished the nursery, babified the car, packed the hospital bag, and even decided on a name (but you still have to wait for the name until she's born)!  All that's pretty much left now is finishing up a few crafts I have planned, cleaning the house, and waiting for her to make an appearance!

I feel like we've been working on her nursery for forever.  I looked back and did the math, and it's taken a total of 9 months to go from a "catch all" room, to a beautiful nursery! It took a lot of hard work to strip the wallpaper (for an awesome bonus on this post, read the comments section and see who contacted me - awesome!), prep the walls, paint, remodel furniture, figure out the furniture, and finally decorate!  I just love walking by the room and can't imagine what it'll be like when a little baby is sleeping in that crib. 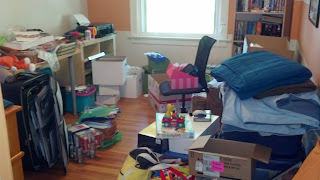 (When we moved in, we referred to this room as "the office".  But it actually became more of a catch all room.  For the longest time, it held all the boxes that needed unpacked, and then slowly transformed into this chaos.) 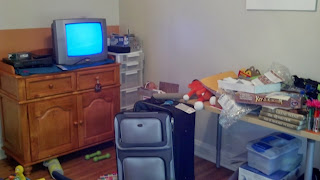 (I had visions of this room being a little crafting area that I could utilize and even watch tv in it.  However, I could only watch VHS movies in here (we own like 5), and then everything got thrown in this room.  So it sat like this for way too long, until I finally decided it was time to prep for a baby.  I started cleaning out the room and then stripping the wallpaper in late fall/winter of 2012 and found out I was pregnant with Bean in January 2013!) 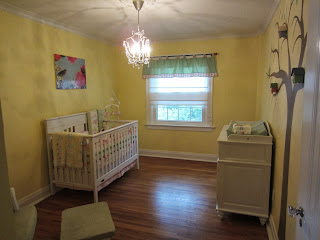 (I can't believe the before and after pictures.  All the hard work was totally worth this beautiful space!) 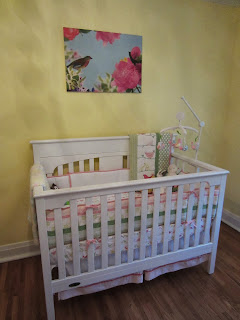 (I am not one to do hodge podge decoration.  I wanted to pick out a complete nursery decor & bedding set and just use that to fill the nursery.  However, Steve wanted it to be more unique and use items from all sorts of different things.  He pretty much found the stuff, and I executed the vision.  This picture came from Ikea and the bedding is from Potter Barn - thanks to our Steve's amazing Craigslist find!) 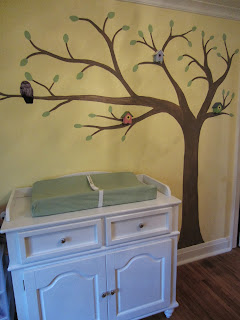 (I take sole ownership of this beauty - okay, inspiration came form Pinterest.  How did people accomplish things without Pinterest?!  I first used chalk to draw the tree up on the wall.  It took me a few different tries, but finally got the tree I wanted.  Then I painted it - which was pretty scary because it would take a lot of work to try to fix a mistake or even scrap the whole project with the brown being so dark.  Last, I painted little bird house and Steve attached them to the wall.  Check out the owl on the left!  That is the actual owl that lives in our backyard.  A bird nursery for our little girl wouldn't be complete without our favorite bird to watch and listen to!) 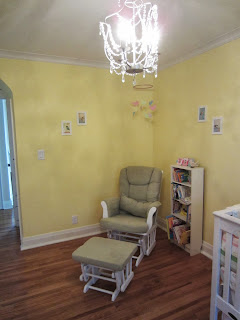 (This is where she and I will be spending lots of snuggle time while reading & rocking.  It's hard to see, but check out that sweet little mobile up in the corner.  This hand cut bird mobile came form the shower that my sweet Lima friends threw for me.  All that cutting was not for vain!) 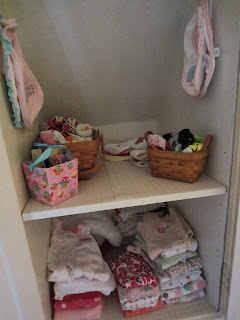 (Notice there's no dresser in Bean's nursery.  All the storage is in this little cabinet, with a few drawers underneath; the closet; and the baby changing table.  When I organized all her clothes, all the piles and everything made sense.  Now I don't really remember why I put stuff where I did, but as with any new organization, I'll just have to work out the kinks once this is all in use!)

So we're all ready, and now we wait!  We thought maybe she was going to make an early appearance but now it's looking like it's going to take awhile longer.  After my last doctor's appointment (I go weekly), we learned that there is definite progression being made -- Ahhhhhh!!  It's crazy that any day now, we could be holding our daughter!  Emotions (especially terror, haha) are running high around here.  I'm a definite planner and it kills me to not be able to know when it's going to be the real deal and time to head to the hospital.  I'm trying to enjoy these last few weeks (or days?!) of baby poking around inside me and life as I know it, but I'm going crazy with anticipation.
Posted by Unknown at 9:40 AM