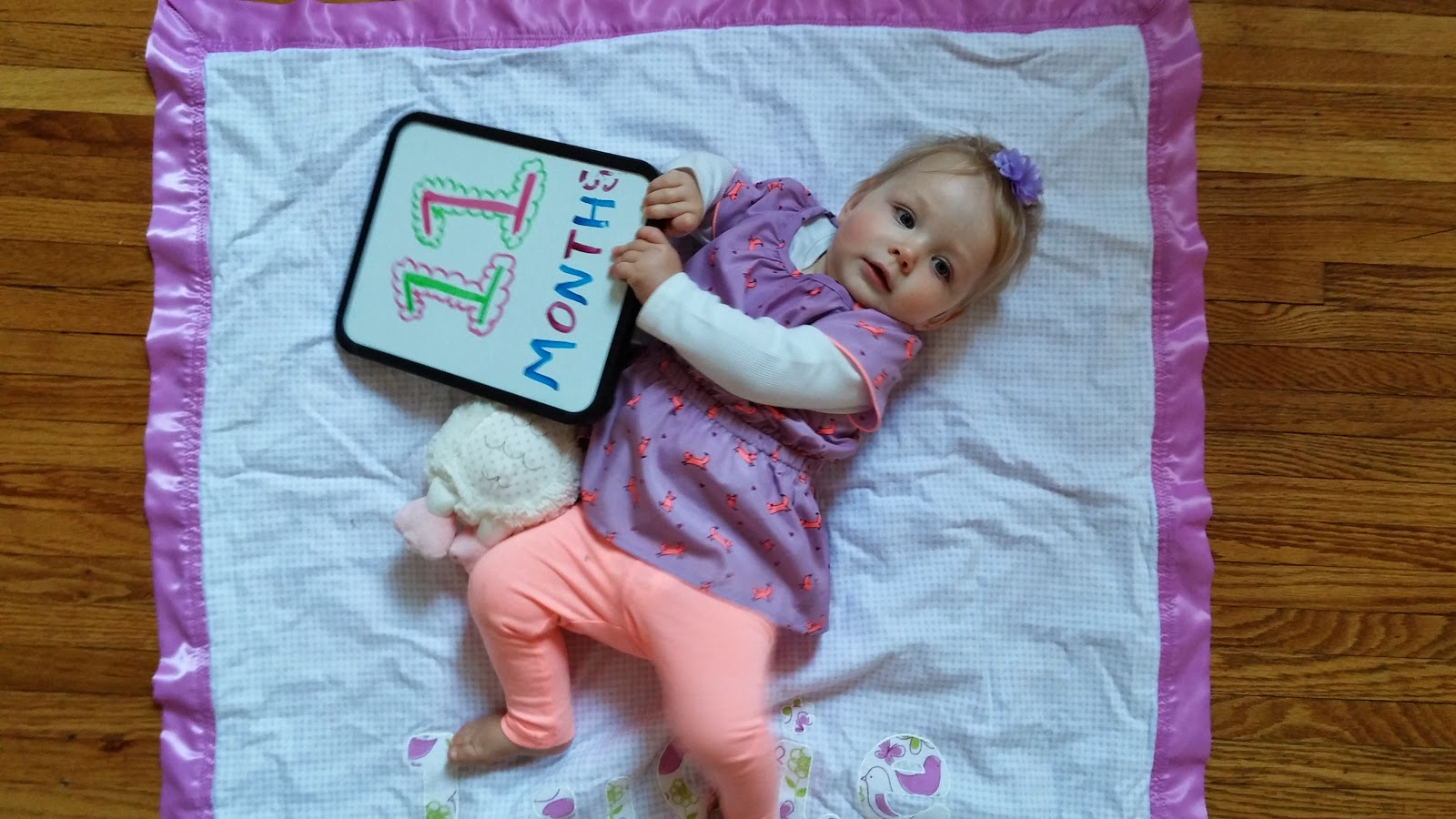 Ahhhh, 1 year is just around the corner (and even closer now that this post is a week overdue)!  How is this even possible? Okay, really, it seems like her birth was forever ago.  We've packed a lot in with this child and have made tons of memories, so I actually do know where all the time has gone!

Bean has had quite the month.  We've packed in lots of stuff - visits with family (both Steve's & mine), visits with friends, and some not so fun stuff like sickness - boo! It seems like this month was filled with extremes -- some of the best days (and sleep) mixed with the worst days (and no sleep).  Notice a correlation?

At the beginning of the month, Steve's family came to visit and while they were here, Bean was off and had a terrible time sleeping.  I figured out she had a fever, and when the fever broke, she had a rash for a few days.  A call to the doctor confirmed my friend's suspicion that she had Roseola virus.  Poor girl.  We've been blessed to have a healthy baby until August hit, and then she's been sick 2x.  And now, she's currently dealing with a very runny nose and some congestion, we're hoping it's just allergies.  Oh well, better now than when she was itty bitty, right?

Bean isn't walking yet, but getting more curious about it.  We try to make her take our hands and walk.  She gets very excited that we are excited, but she's not necessarily excited because she's walking. She can "cruise" around between the couches and around the coffee table.  She also loves to take our Ikea footstool and push it around while walking.  We're hoping she'll be walking by her first birthday, so we're starting to get a little more intentional about working with her.

Her favorite food is still cottage cheese with strawberries as a close 2nd.  We've been doing more of the baby food grabbers with her, and boy are those convenient!  I always keep one in the diaper bag, just in case ;).  She's also eating a lot of pasta (Gerber raviolis all the way to boxed mac'n'cheese).  I've tried to give her some meats like chicken and ground beef, but she's not totally into them.  She also goes through phases on loving and hating veggies like carrots and green beans. She now eats all her meals naked.  I use a rubber bib that "catches" food, which has helped minimize waste and mess.  I finally got wise, bought a shower curtain, cut it into 4, and use it underneath her chair.  A couple days a week, after the curtain collects lots of debris, I switch it out. The old one gets shaken off and washed and ready to be used again.

Like I said earlier, sleep has been either really good or really bad - especially naps!  Bean went from sleeping 1.5 in the morning, 1.5-2 in the afternoon, and 11+ hours at night to maybe sleeping an hour during the day, and still 11+ hours at night, but gets up and cries a couple times.  It doesn't help that we've had a busy month - 2 weekends of visitors, 2 weekends being gone -- with a mix of sickness.  I've been caving a lot and giving her Advil and Tylenol before bed.  She has been doing a lot of chewing, so I'm guessing new teeth are coming in.  During her awake times, she seems happy; but once it's time to sleep, my child is replaced by a baby that will do anything to not sleep.  She'll arch away while I try to rock, play/stand up in her crib, pull out paci and throw it on the floor, and babble non-stop to fight sleep.  She tests my patience A LOT.  Thank God she's cute, or things would be a whole lot tougher.

The past few days, I've tried a different routine: Tuesday/Thursday/Saturday's we do 2 set naps - morning nap about an hour and afternoon nap 1-2 hours.  Monday/Wednesday/Friday we do a 30 min nap in the stroller while I run in the morning and a (hopefully) 1.5+ hour nap in the afternoon.  Sunday is survival day :).  It seems to be working, we'll see how long it continues.

Bean loves to talk, but doesn't love to use English. Ha!  We've been trying to work with her on words, like "cow" (a favorite toy) and "momma".  But she refuses to say it.  I totally have caught her saying "ma-ma-ma-ma" before, but immediately stopped when I said, "say momma!".  I'm pretty convinced that tonight she said "duck", well it was more like a "duu"; but she said it repeatedly as she held her bath duck.  She'll also communicate "all done".  Whenever she's done eating, she'll put her hands in the air and shake them.  Steve thinks this one is made up, but I worked with her on it from the time we started her in the seat to eat. We've also changed dinner routine a little bit.  Now I make dinner just a little earlier and we all sit down and eat together around 6 (before, she ate leftovers while I made dinner for Steve & I.  Then we'd eat in the living room while she played).  Now I feel like we have more time in the evening since dinner production is no longer an hour+.

I also think she had a growth spurt at the beginning of the month.  She went from wear 6  or 6/9 month clothing to 12 or 18 months!  Seriously?!  I put away a bunch of her clothes a few weeks ago, and got very sentimental over all the teeny tiny baby clothes.  Thankfully, we get hand- me-downs from my sister-in-law/brother.  Those clothes have been such a blessing!  Almost all her summer clothes are put away, and all the fall clothes are pulled out.  Now I just got to get my butt in gear and do that for Momma & Daddy :)!

Other notable cuteness -- Bean will shake her head (like saying no) just to be cute.  It's really funny, and she does it all the more if you do it back to her.  Only problem is, when I have to really tell her No! and shake my head.  She'll shake her head back at me and laugh.  Ooops :).  After we had our college friends come visit, Bean started to crawl up in her Ikea chair (just like one of the other kids did), so now I have to worry about her getting in it and falling out.  We also caught her sitting in the bottom toy drawer, which could have ended badly.  She'll also do this thing where she'll cock her head to the side on one shoulder, and sort of make a crazy smile face. 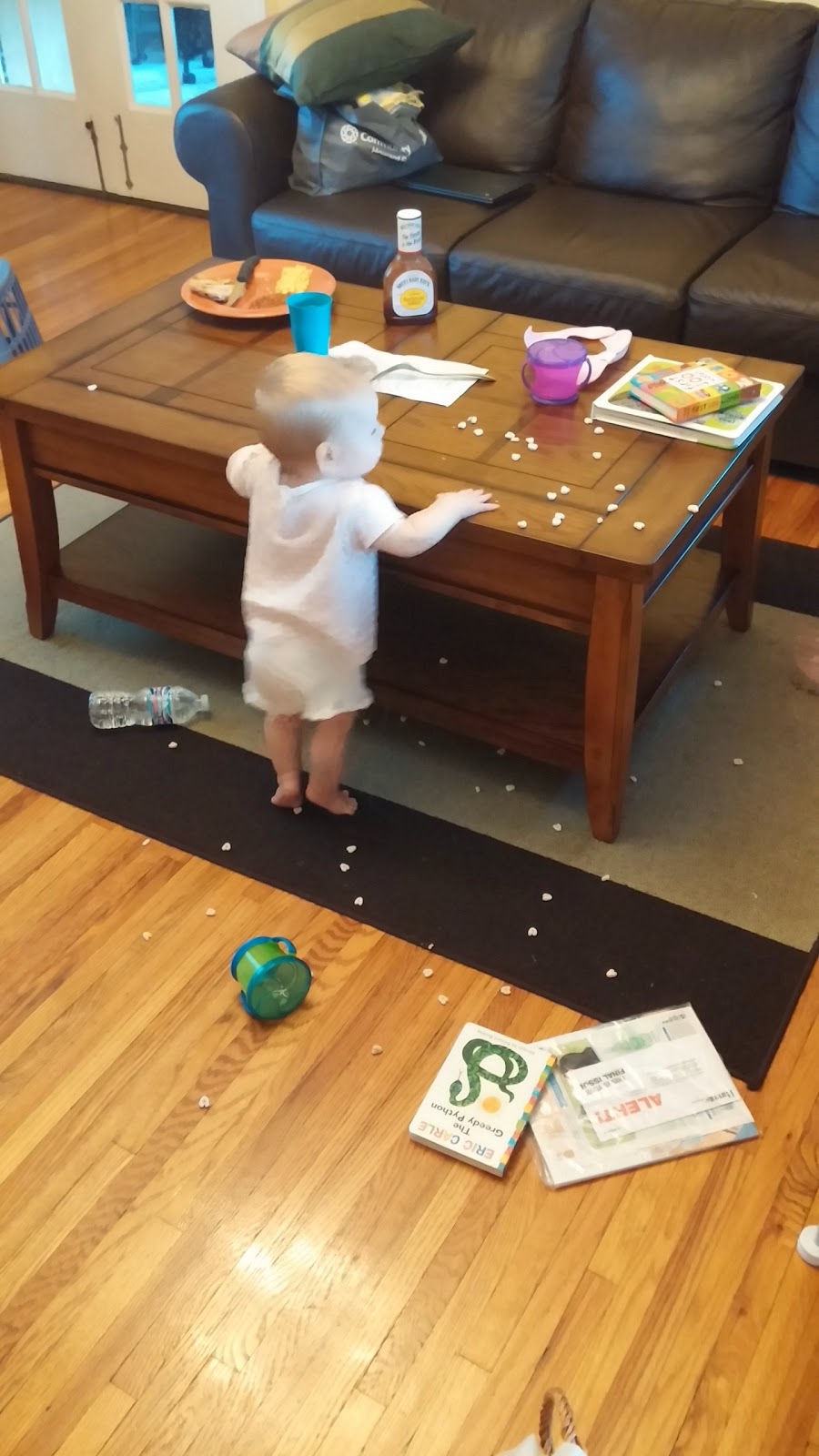 (Just a typical day in our household.  Puffs out of control all over the place.  Bean can use her snack cup correctly, but chooses to hold it open and shake out the puffs all over -- that is when she's not stuffing random things like socks into the cup.) 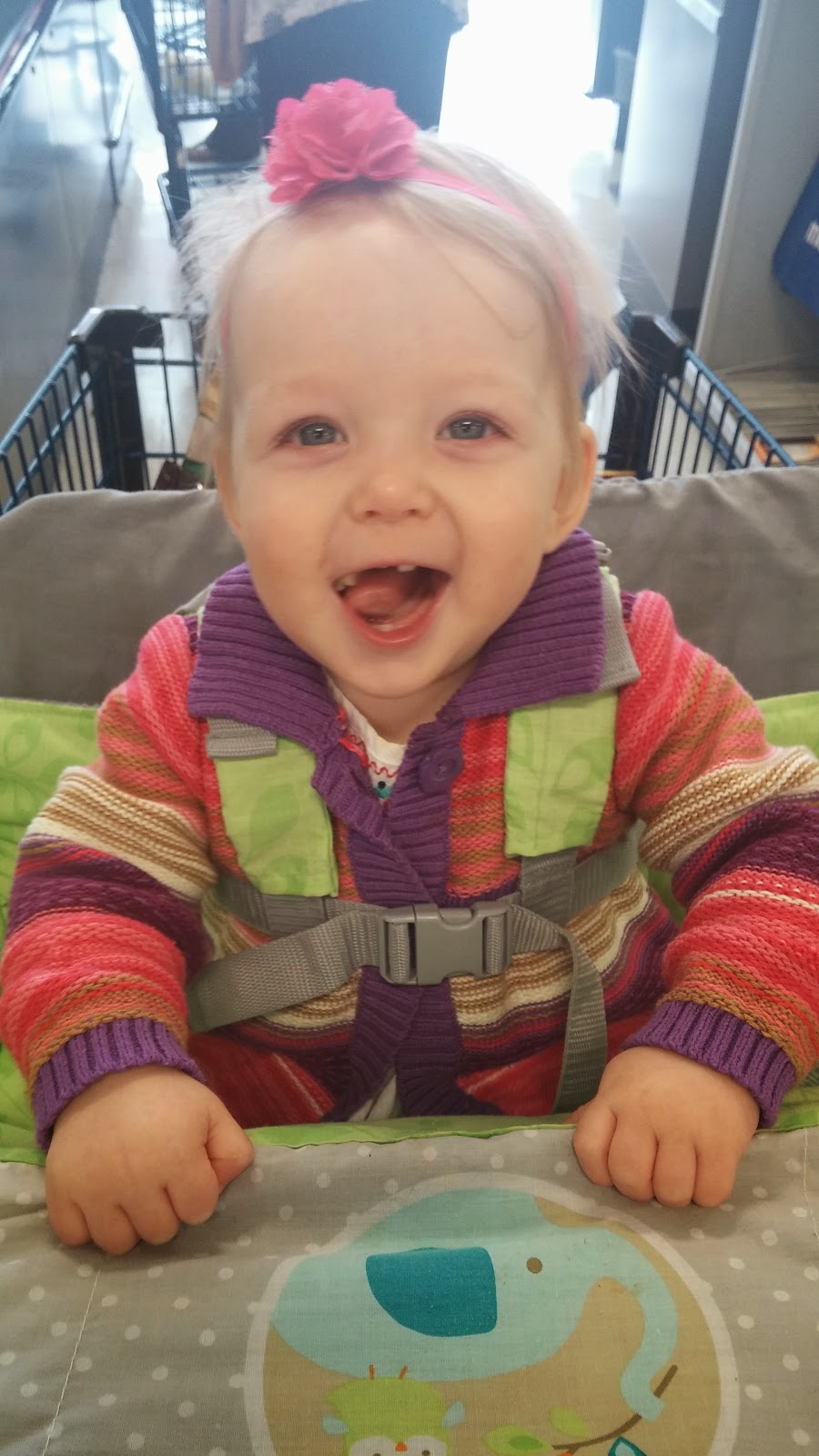 (My shopping buddy!  She is such a big girl at the store! She of course makes tons of new friends and typically goes crazy in the cart -- yelling, shaking her head, and just being crazy.  I have to bribe her with snacks towards the end.) 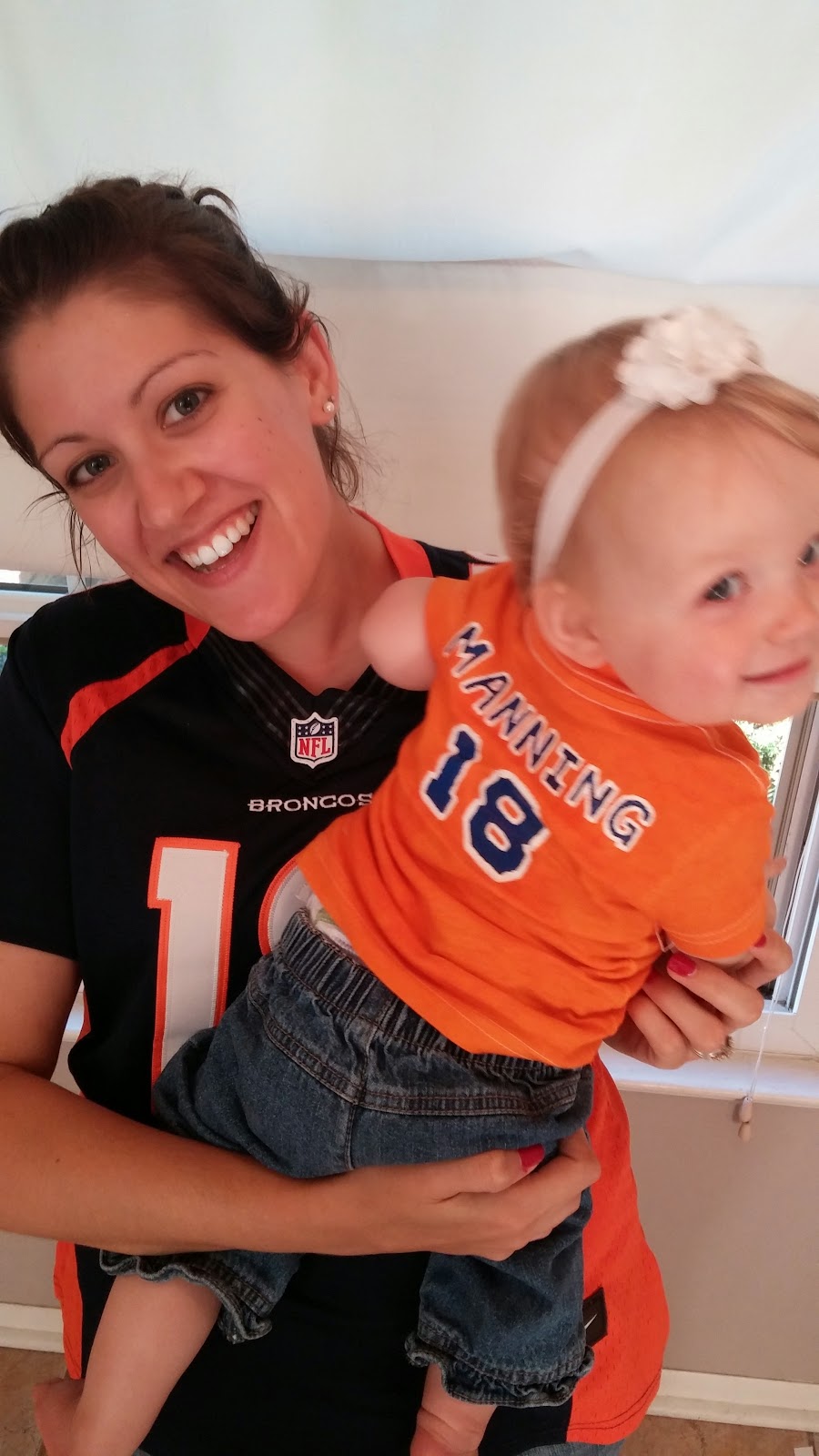 (Go Peyton!  We still love you even if you couldn't beat the Seahawks again.) 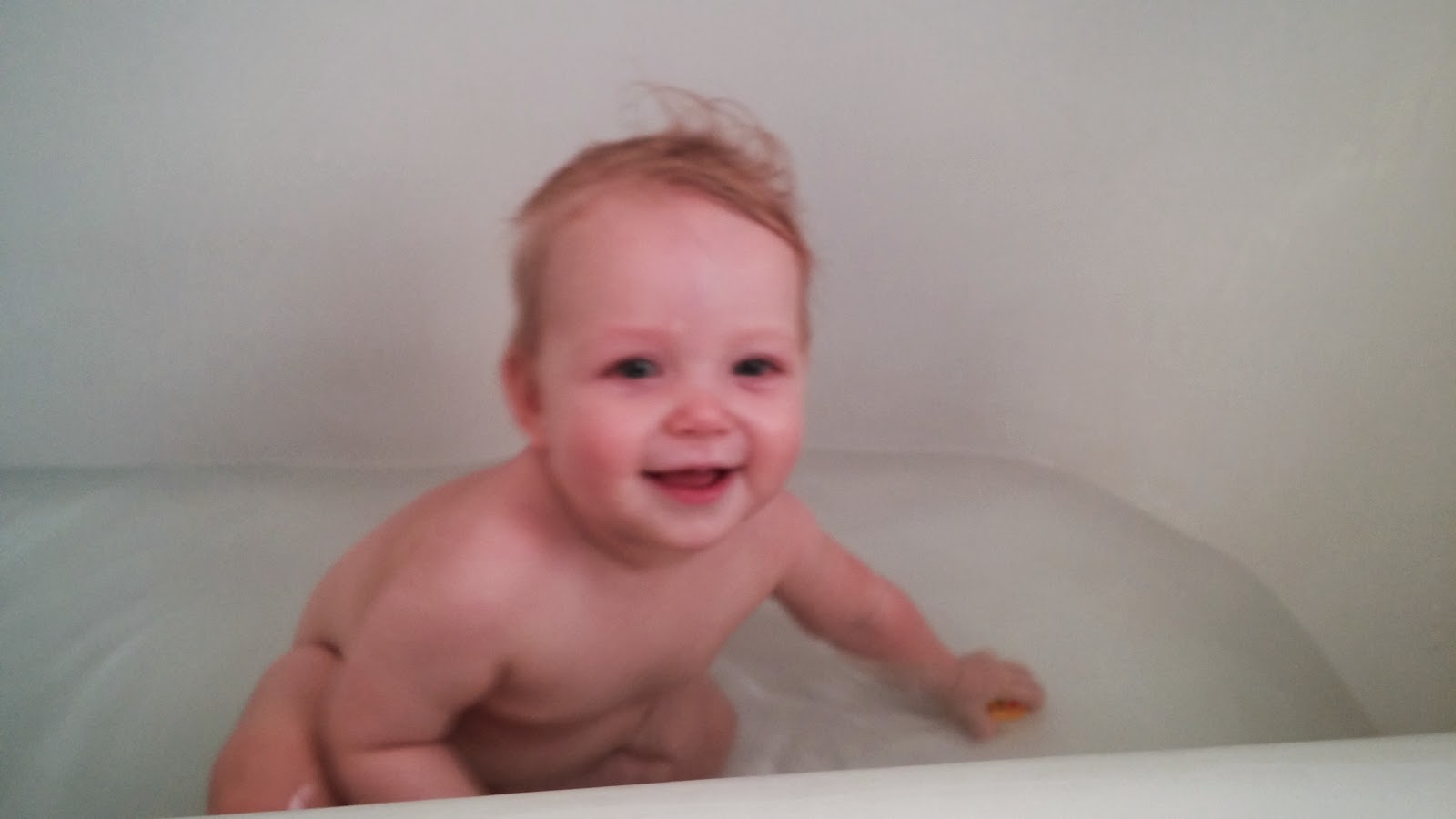 (Big girls bathe in big tubs!  Bean is doing great bathing in the tub.  She moves all around, plays with her ducks, and drinks the water out of a cup -- eww!  We've only had 1 incident with poop in the tub, haha.) 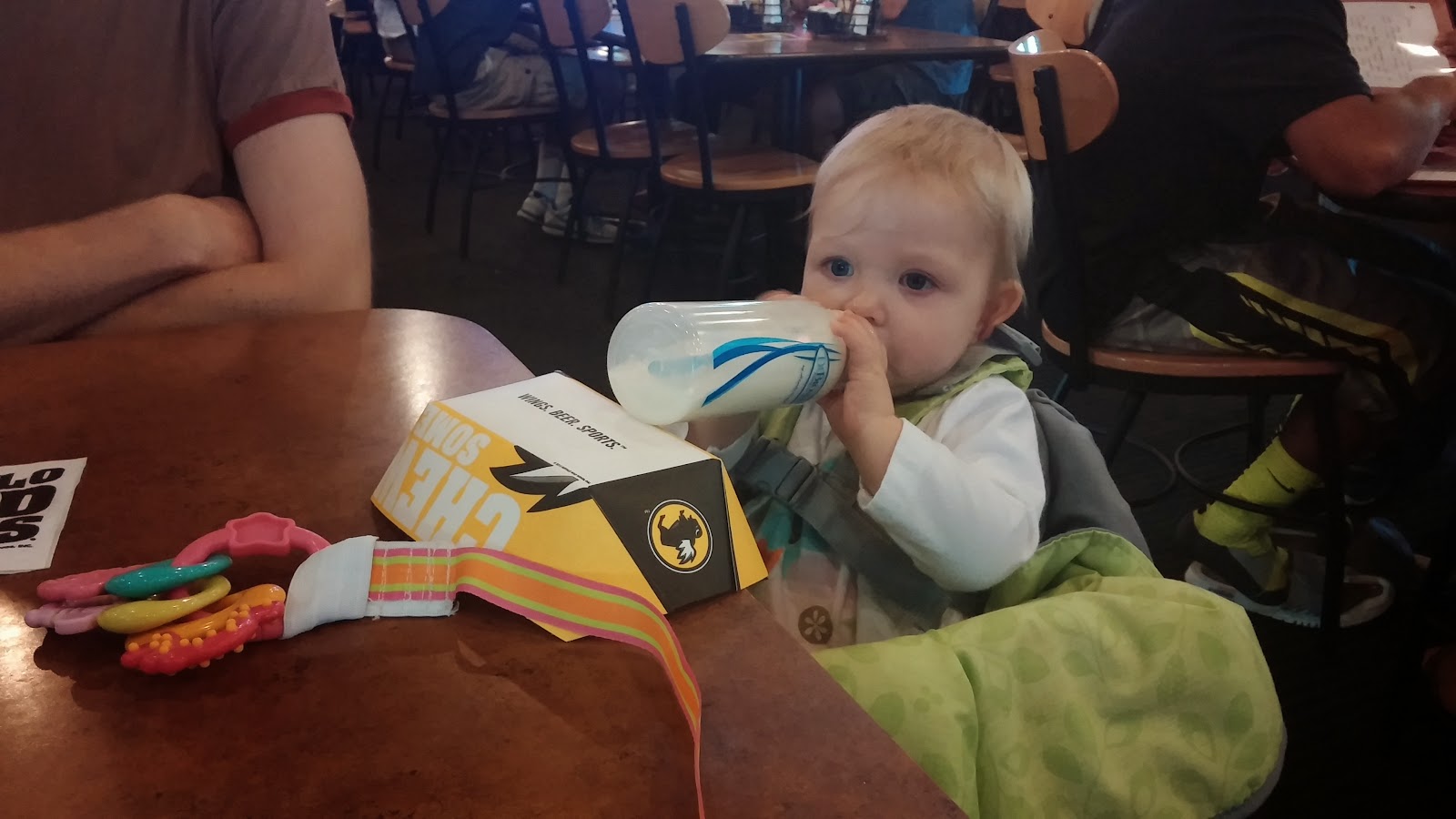 (Can you tell her daddy's an engineer?  He rigged up that little bowl to help tip up her bottle while we were out to eat. Oh and I seriously love my cart/highchair cover.  It's so nice! I just leave it in the car all the time so I always have it when we're out.) 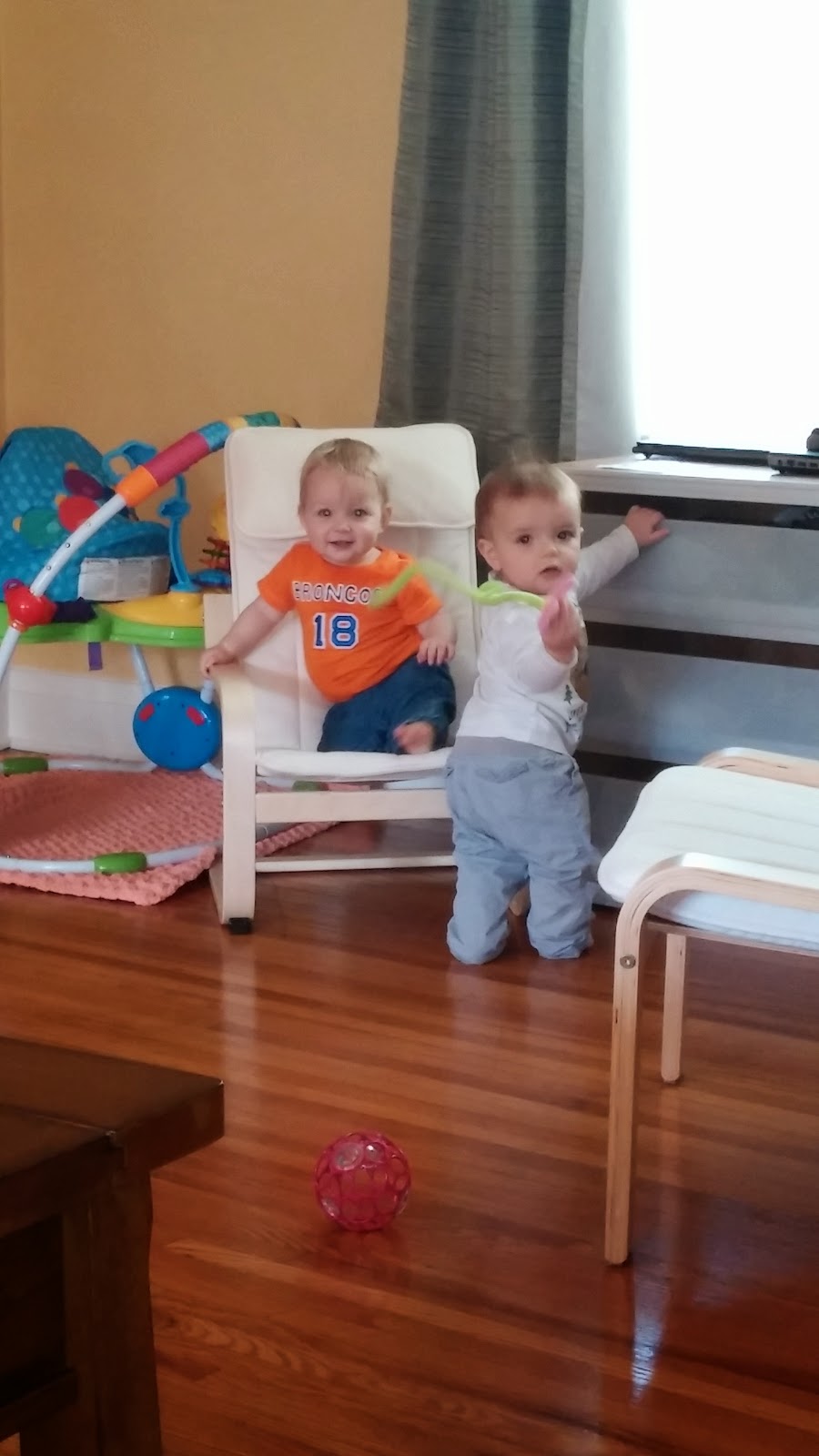 (Bean taking her turn in the Ikea chair after her buddies Wilson and Montgomery taught her how to climb.) 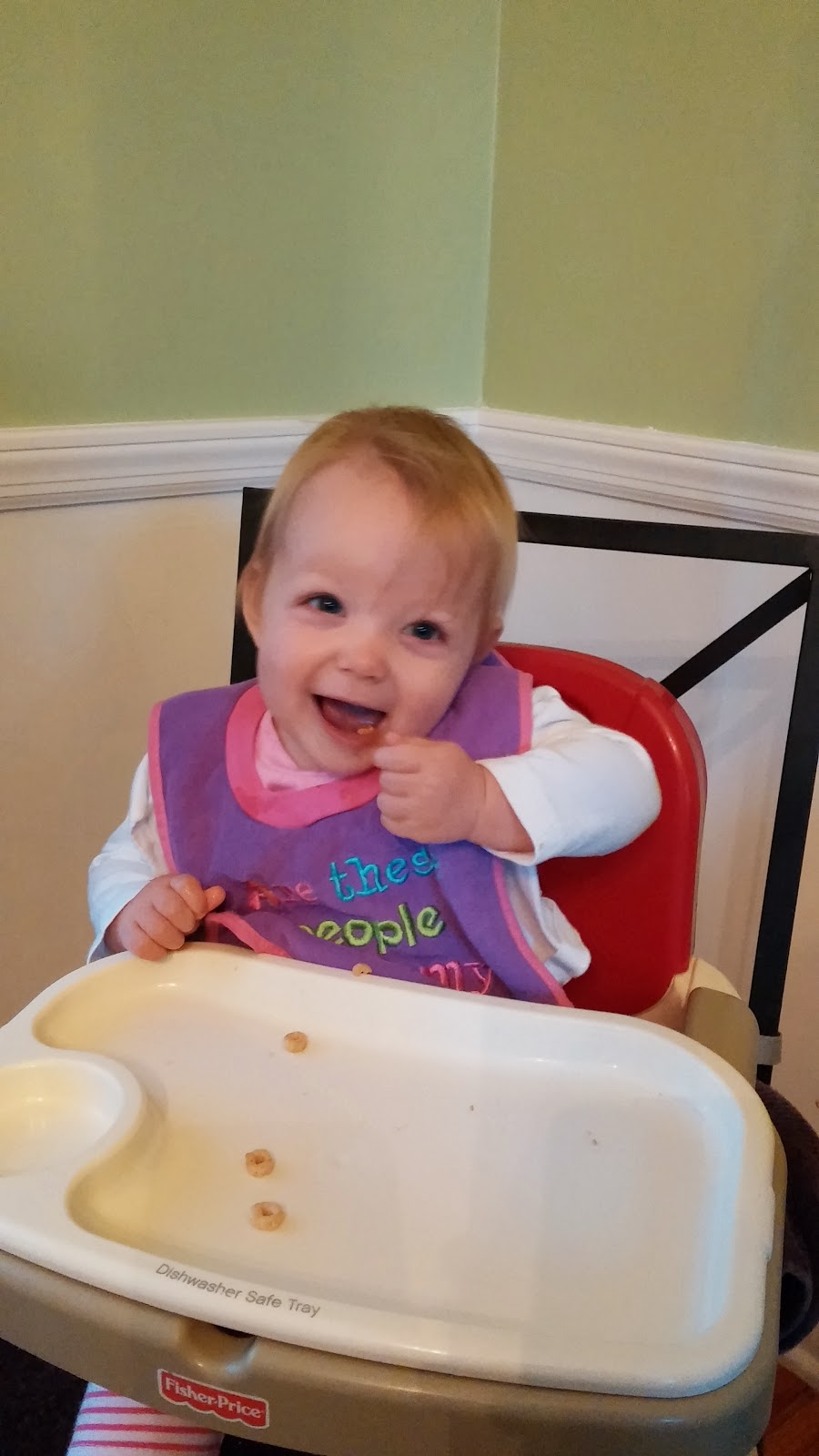 (Sometime this month, she's turned into quite the ham.  Okay, maybe she's always been that way, but now that she's bigger, it's so much cuter.) 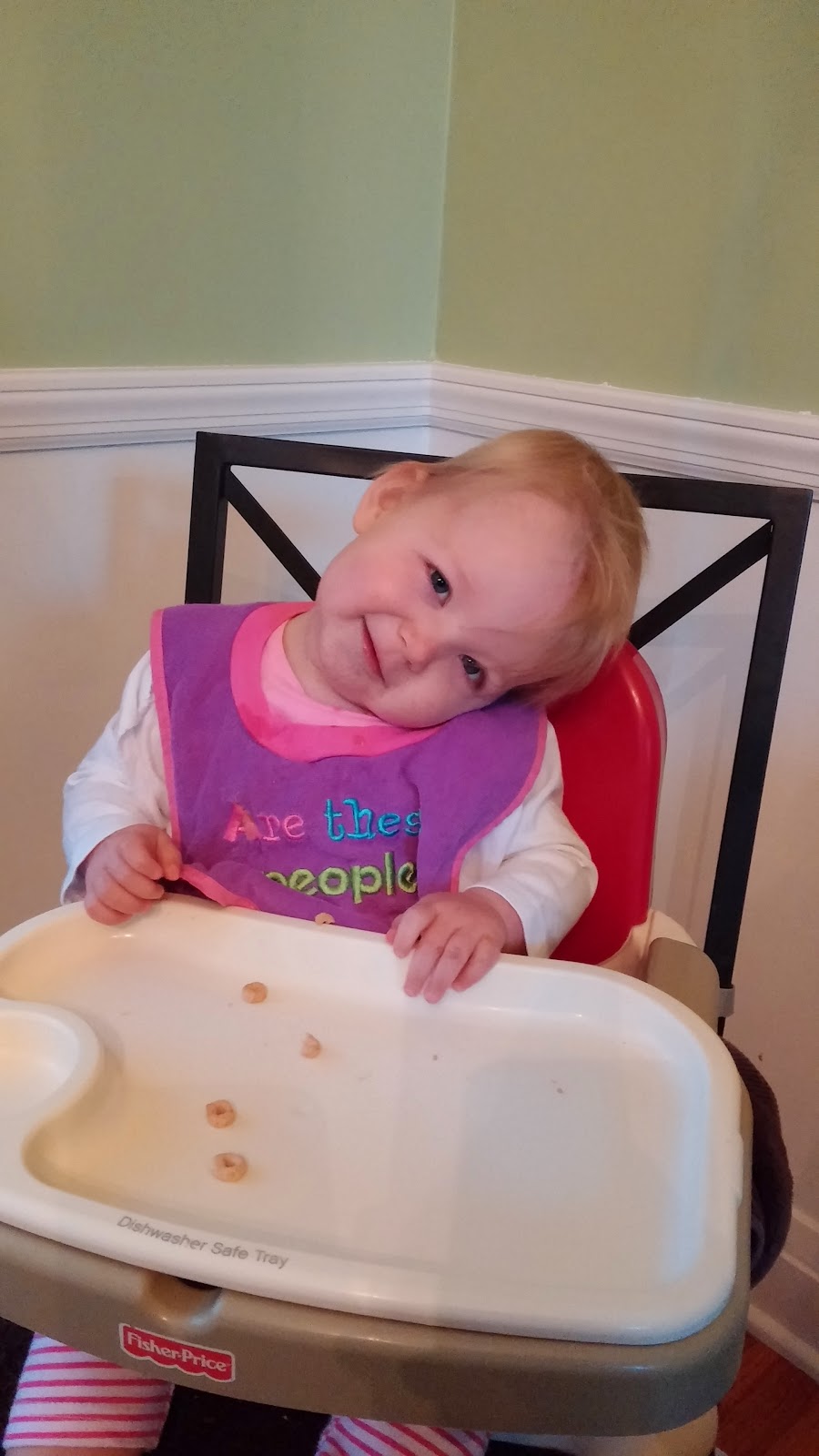 (Doing her adorable head tilt.  If you tilt your head, she'll do it back.  She also does a crazy smile face, but I couldn't catch the face in a photo.)
Posted by Unknown at 8:14 AM