Usually, my siblings and I are on the ball when it comes to gifts for mom and dad throughout the year - Mother's Day, Father's Day, both their Birthdays, and then Christmas.  This year, I guess new babies took over and we didn't rally together like we should have.  So far this year, we missed Mother's Day, Father's Day, and my mom's birthday.  With dad's birthday around the corner, we figured we needed to do something big to make up for our absence of appreciation for great parents.

So we rallied together in true Willis kids fashion and pulled together another one of our famous Disney Days for our parents.  It started several years ago when we put together a "cruise" for our parents in our house.  We set up different rooms to be different parts of the ship and would re-enact things that happened on our first Disney cruise as a family.  Since that first Disney Day, we've done a couple more and always try to top ourselves.

Our last Disney day was in the Spring of 2008.  That Disney Day, we chose to re-enact Fantasmic (one of the night-time shows).  We danced around our parents in the yard and acted out the entire 30 min show - complete with all the characters, coloring pages subbed for the water screens, and costumes.  Steve and I had just been dating for a few months, and he came home with me for the weekend and participated with us.  He manned the camera for part, provided fireworks and bubbles, and even dressed up as prince charming.  I, however, didn't get to play Snow White.  Instead, my brother donned a wig and cape and danced with Steve.  Right in front of my parents, Steve dipped my brother and planted a kiss right on his lips.  That's when I knew I'd marry him - he fit into our family perfectly!  Hahahahah!

For this Disney Day, we chose to recreate Epcot in our parents' backyard and re-enact my dad's favorite nighttime show (Illuminations: Reflections of Earth) and their millennium parade (Tapestry of Nations) which has been retired.

We sent my parents away for awhile in the morning so that we could pull everything together.  My parents took Bean with them which was a big help!  They went to lunch and hung out at my grandma's house until we were ready for them to return.  When they did, we first had a "Food and Wine" snack bar set up.  (One year we went during Epcot's Food & Wine festival and dad and I used up our snack credits to try all this yummy food). 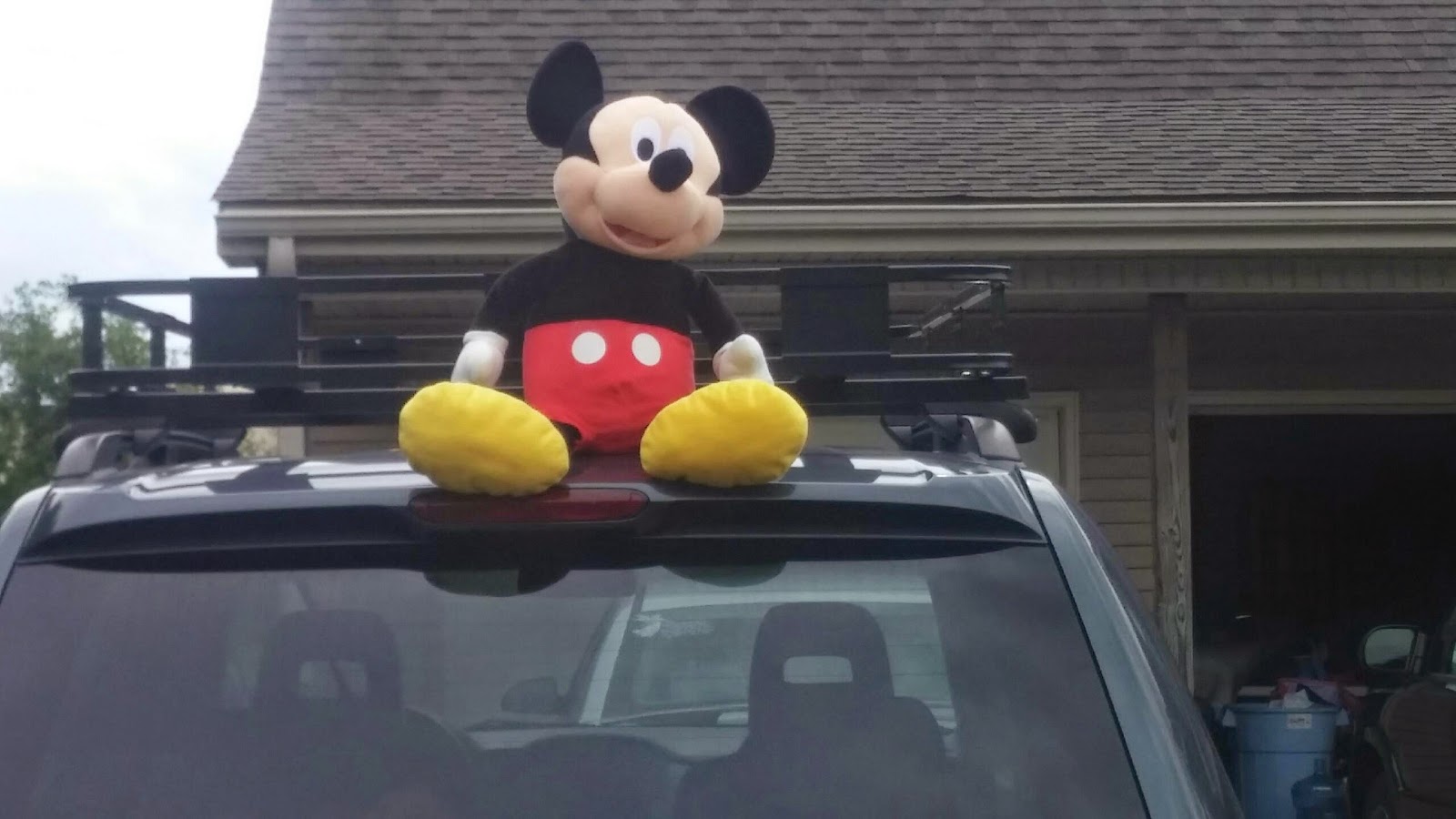 (Mickey greeted my parents on their return to the house. What a good mouse!)

After that, we headed out into the yard for a "Segway Tour of Epcot" just minus the Segways.  Ha, we didn't feel like pulling them out.  We had set up little attractions (I mean like a couple dinosaur figurines to count as Universe of Energy Ride, a Figment animal as "Journey Into Imagination", a bowl of sponge fish for "Living Seas", etc.  One of the stops was a couple of chairs encased with a card board car front, also known as "Test Track".  Mom and Dad sat in the chairs while we recreated the ride - bumpy ride on Belgian Bricks (shook their chairs), stopping with ABS (hit chairs back and forth), Heat Room (flashlights in their face), Cold Room (threw ice at them), Acid Room (Squirt Bottle - Gabbie got the honors), and we even had the barrier test (a couple of poster boards quickly spread apart to reveal a fan in their face - hahaha). (Can't take a tour of Epcot without a quick stop at Spaceship Earth - and watch the monorail do a lap!) 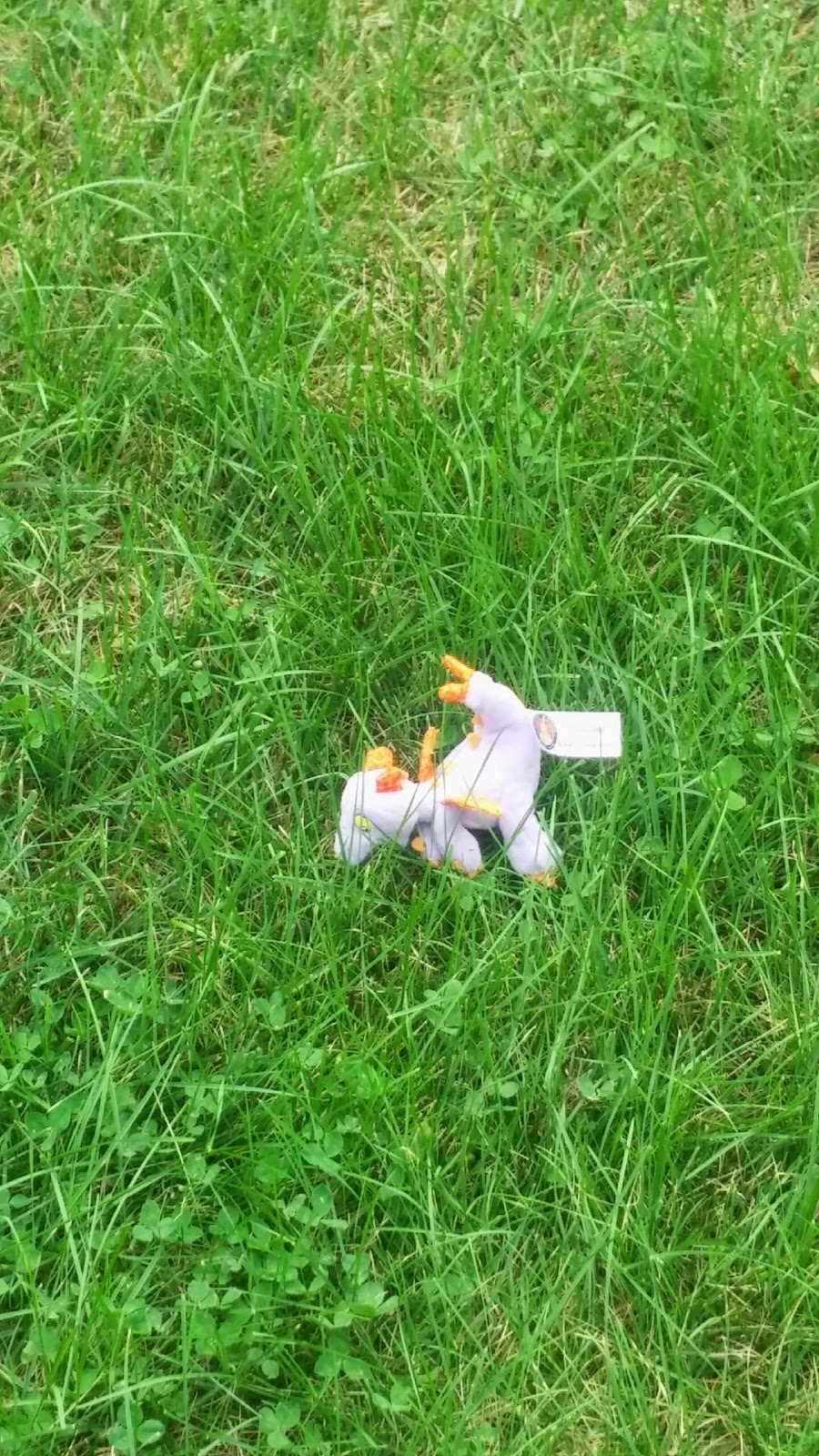 ("Journey into Imagination" with Figment.  By the looks of it, I'd say this ride was down, hahaha) 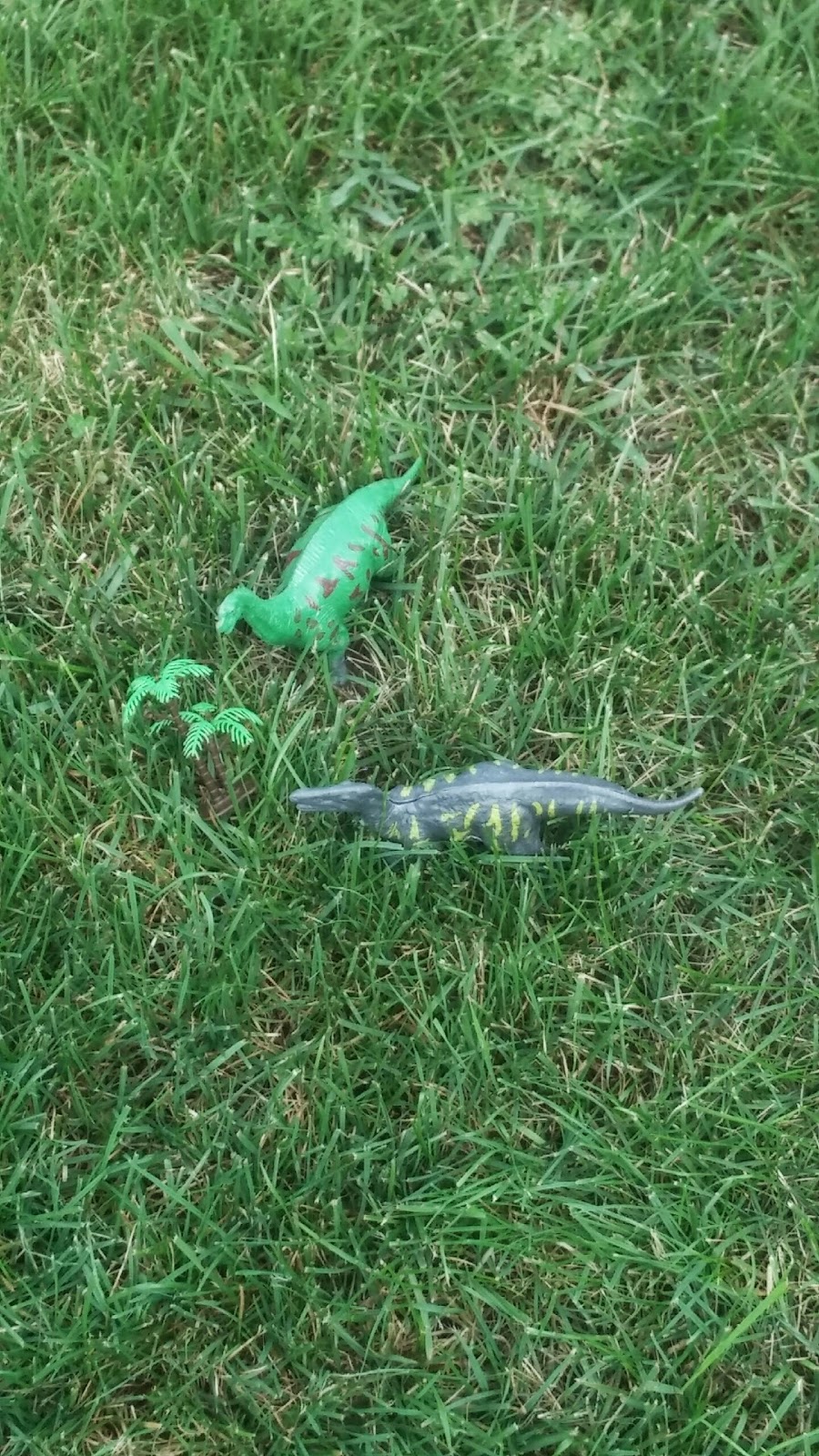 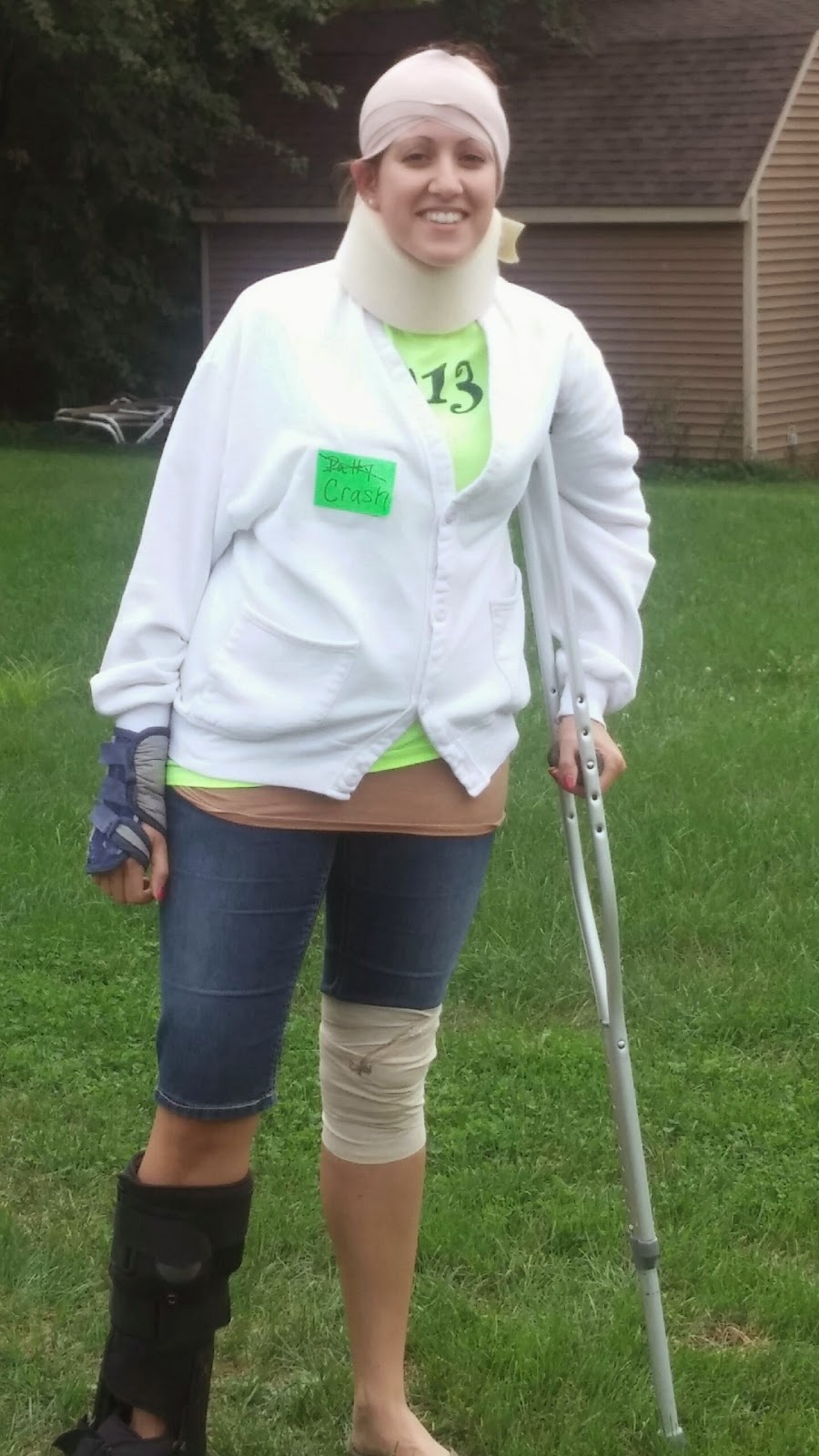 (When "Test Track" was first created, there were Crash Test Dummie characters that would come and entertain the crowd during the long waits.  I decided Crash needed to come and assist with today's ride.) 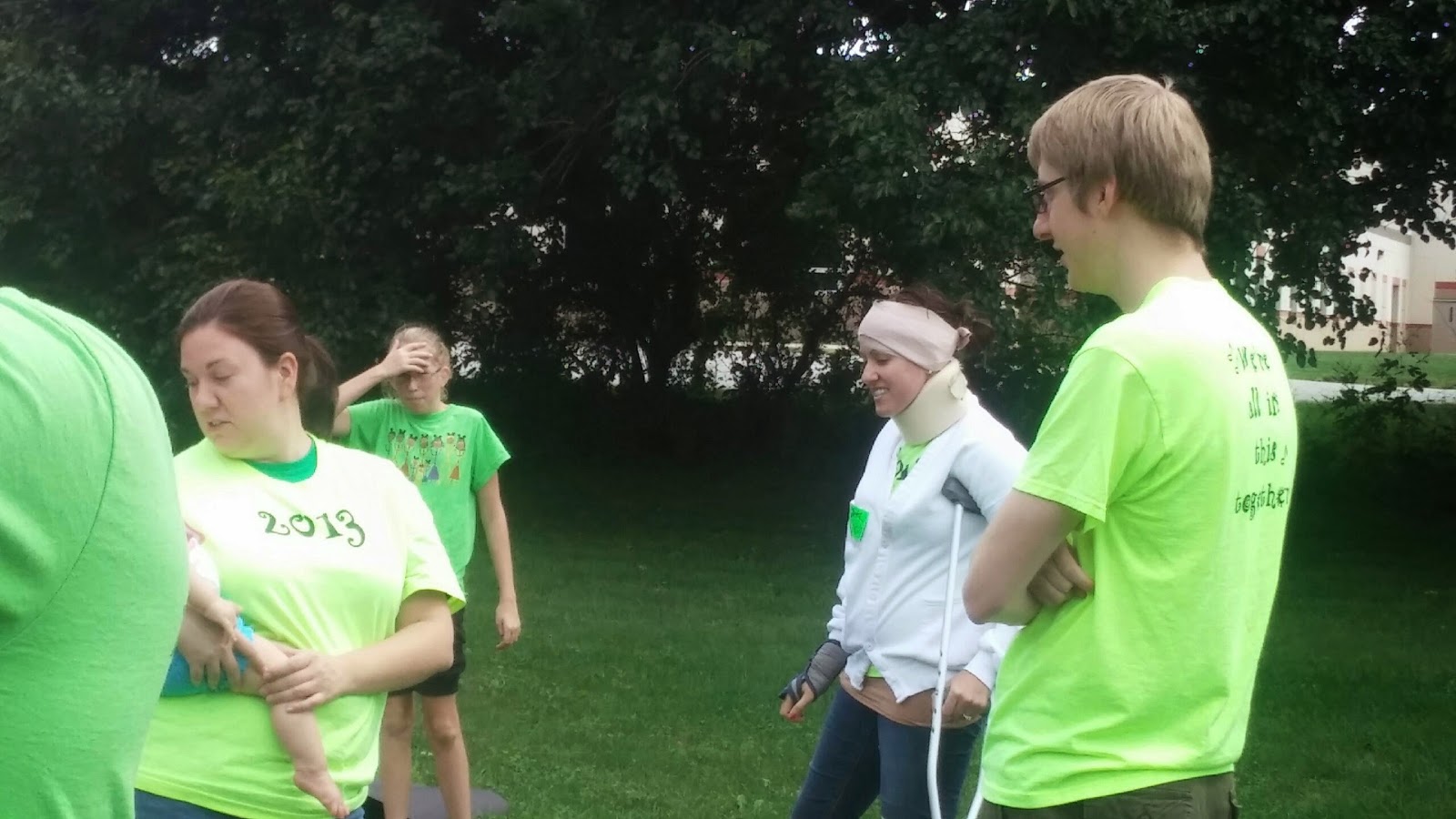 (All the siblings even rallied together and wore our Disney shirts.  I'm not really sure what we were doing at this point, or why Emily looks frustrated - ha!)

After Test Track, we did the Tapestry of Nations parade.  The real parade involved huge puppets that were operated and worn on the shoulders of those in the parade.  Our version involved babies on shoulders as the puppets, a hula hoop drum, flags, and some cute little butterfly dancers.  After the parade came the big show -- Illuminations.  All the siblings and nieces were hidden behind a banner on the deck, while Steve stuck to operating lights & fireworks (we go all out!).  My sister was originally going watch the show on the laptop and call cues, but I ended up being "cue" master.  I would call out if it was fireworks (which was us throwing socks, streamers, and cat toys up in the air), lights/water (my brother and Steve would turn Christmas lights on and off as directed, and my brother also manned the sprinkler for the amount of flow according to the fountains in the show), and the Earth ball (we used a big yoga ball and just slowly passed it around to each other over our heads).  This was probably my favorite part of the whole day.  Steve had found some fireworks in the garage and managed to have them timed perfectly to the finale!  It was so much fun just screwing around with my siblings. 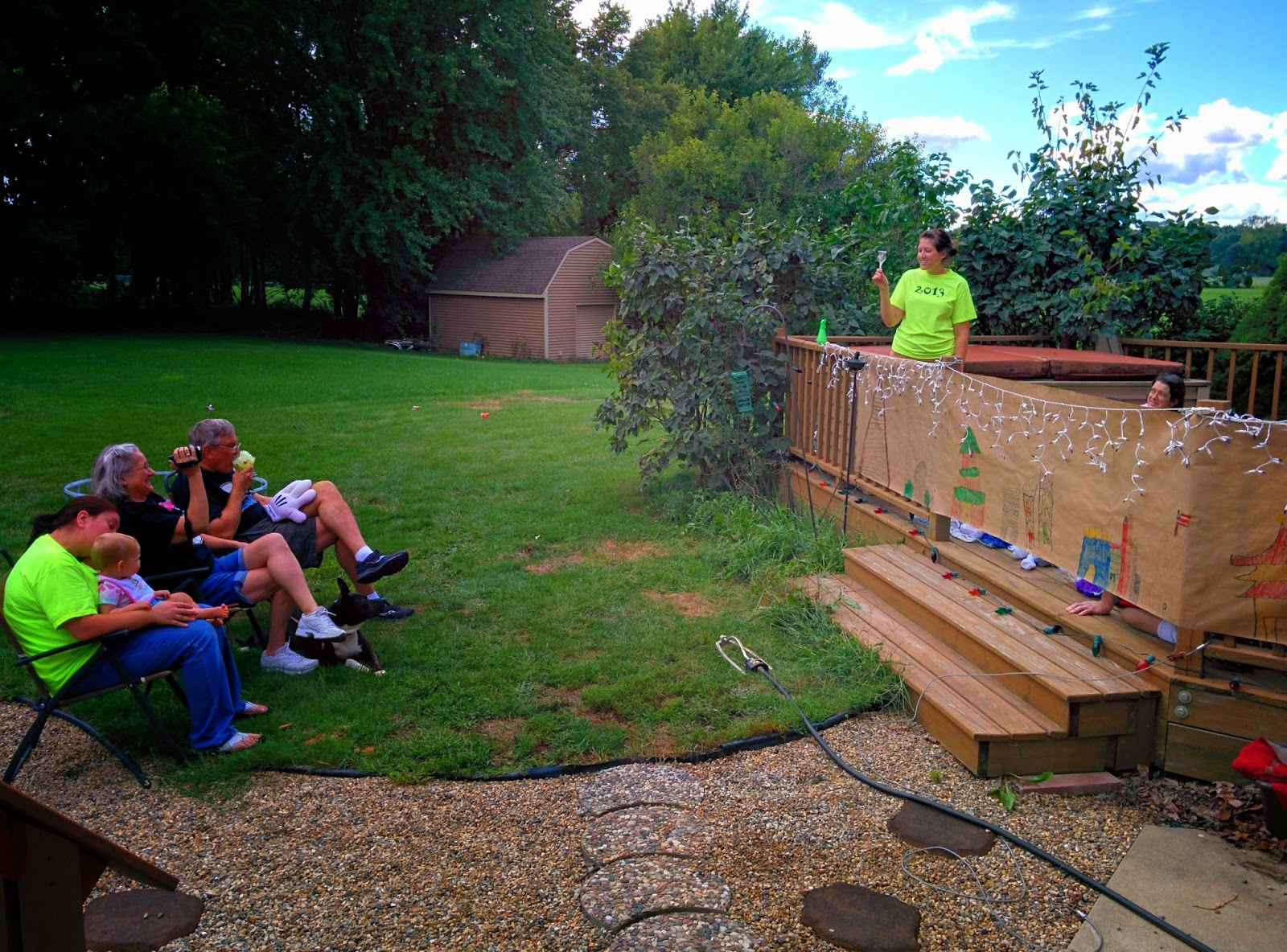 (The beginning of the Illuminations show.  In the beginning, there is some naration that involves a guy blowing out a flame.  I used a candle to re-enact the intro.  Pretty sure Disney should hire me!)

We ended the day with a Mexican feast - which symbolized the Mexican Cantina - our favorite Epcot restaurant.  After the dinner, watched the real parade/show, hung out, and enjoyed ice cream and fun.  By the reaction on our parents' faces, I'm guessing we made up for all the special days we didn't celebrate this year.  We love you mom & dad! 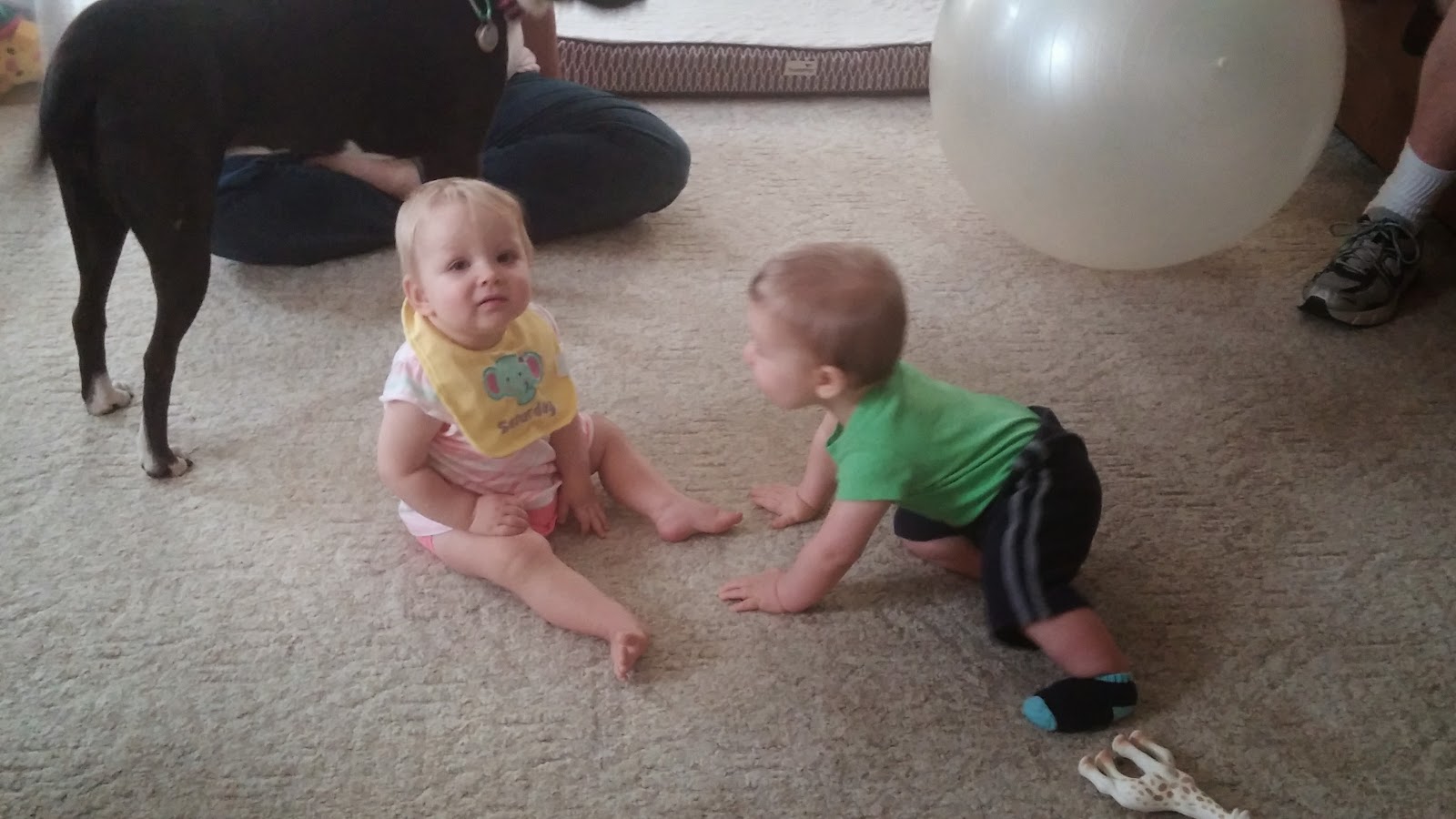 (Bonus Photo -- Bean getting to play with cousin Oliver!) 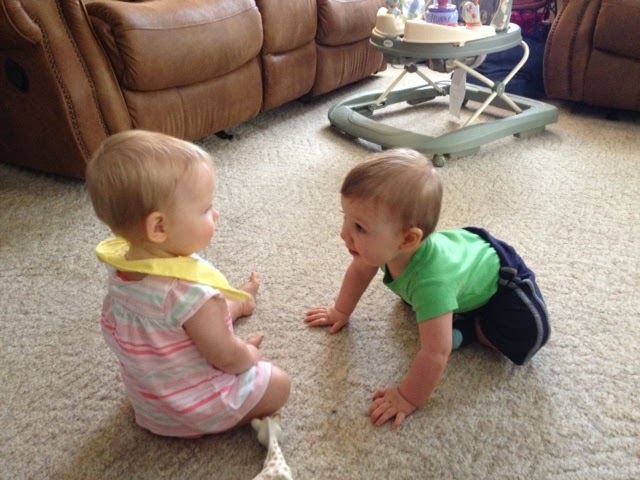 (Oliver is 2 months and 8 days younger than Bean - can you tell?  haha, he's a pretty big boy!  This was the first time these two got to actually interact!)
Posted by Unknown at 9:27 PM