YES! I am still running! I have consistently ran 3 times a week for the past 8 weeks.  For anyone who knows me - that is a HUGE accomplishment.  This is by far, the longest I've stuck to some sort of exercise regimen.  I can actually say that I enjoy tolerate running.  I don't like thinking about doing it, but when I'm out there doing it, I don't mind it (but boy am I always happy to be done!).

In the past 2 months I've logged almost 50 miles!  That seems pretty crazy for me to admit.  In the beginning, I'd maybe run 2 miles (some days just 1.5); now I'm running almost 3 miles each run.  My pace has dropped from around 11:20-10:40 (with the stroller). I don't know what my pace is without it!  Sometime in the next few weeks, I'd like to try to sneak a run in without Bean, but we'll see.

My favorite time to run was in the early morning, right after Bean ate breakfast - even on Saturdays! I let Steve sleep in on Saturdays, and didn't want to wake him up to watch her so I could run, so I just started to take her with me.  Then I realized, why run on Saturdays if I'm still taking her with me?!  So now I run MWF.  I've also changed the time.  I no longer run right away (even though it's the time I'd prefer).  I now wait until around 10 to go run which corresponds to her nap time.  Typically, I'd like her to sleep 10am-11am; but on run days, she gets 30 minutes of sleep in the stroller sometime in that time frame.  That way, it's a little warmer for her and more convenient for her to sleep.  It's been working out pretty good, especially since it's achieving one of my running goals -- to run for my daughter!  I literally am running so she can nap - what motivation!

I have lost zero weight since I've started this endeavor, which makes it tough for me to keep going.  But then I'm reminded of the good it's doing for me as a person blah blah blah from Steve.  Ha.  And don't give me any lectures about muscle weighing more and eventually it'll burn the fat.  Save your breath.  I'm still running, right?  And don't even say the diet word. Okay fine, I said it.  Ha - I'm not dieting, but I'm more aware of what I'm eating.  Other than a new addiction to coffee with vanilla caramel creamer most mornings and waffles, I really don't eat "bad".  I try to make smarter choices throughout my day and don't plan on any real diet.  After all, I'd need a whole lifestyle change in the food department than a real diet, and I'm really liking my Dr. Pepper, occasional chips and cookies.  So we'll just leave it at that :)

Now I have a new goal I'm working towards -- I signed up for the Indy mini in May!  WHAT?!  My sister is a pretty convincing person and threatened convinced me to do it.  Hahaha, man I'm loving the strikeout feature a little too much.  Really she just told me she was doing it and I figure, why not?!  It'd be a nice life item to check off.  Plus I should do it now before another kid is discussed.  Who knows how to run with 2 kids?!

So there you have it.  I still run.  I tolerate it.  I'll keep going until it's too cold for Bean.  And then maybe, just maybe, I'll run in the evenings while Steve is home to log some cold miles.  Regardless of what winter looks like running, I'll have to pick it back up to work towards the mini in May.  Yikes. 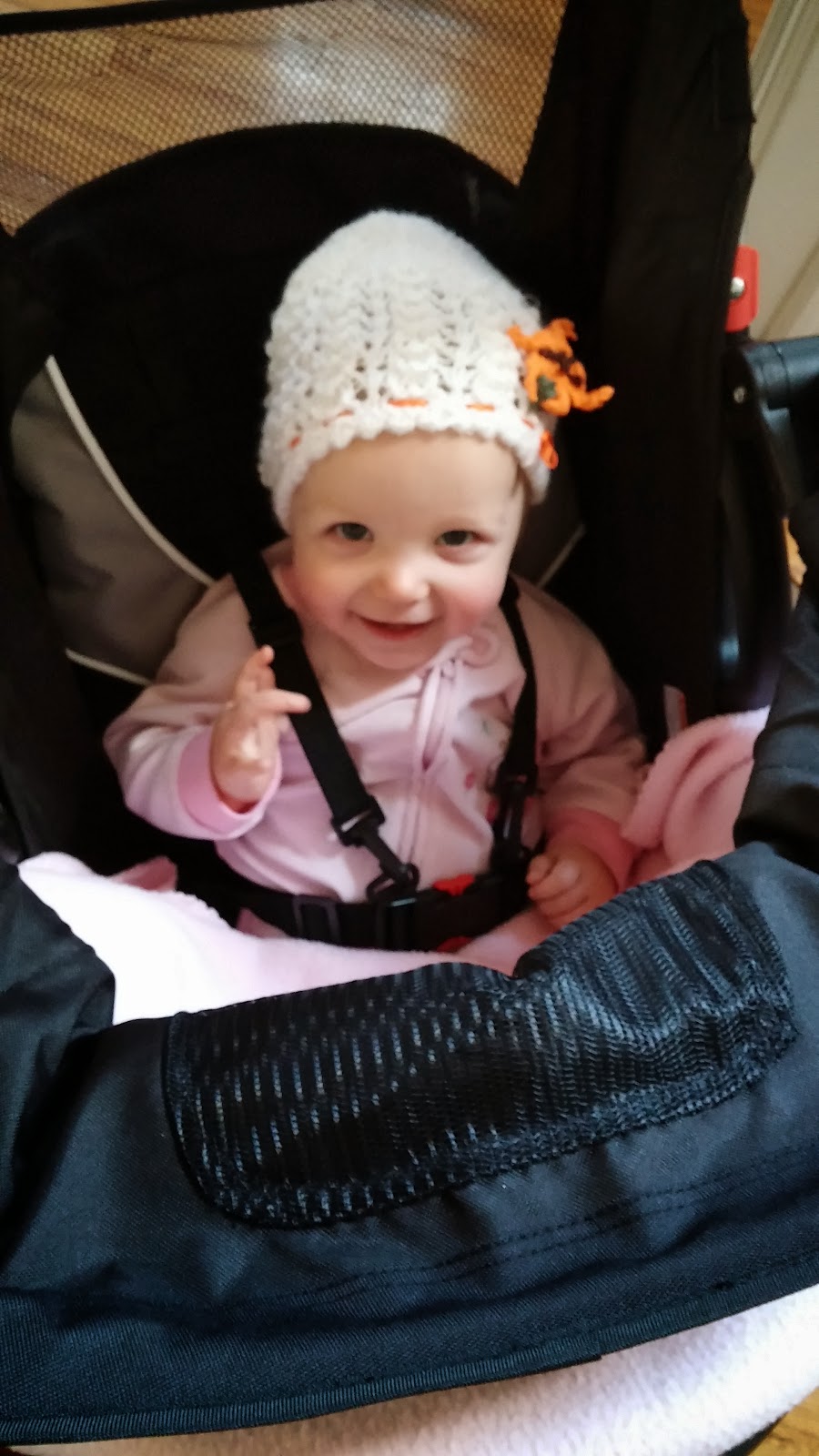 (Bean all bundled up for a run.  Usually I just put a jacket with a hood up on her, but sometimes we'll go crazy and do a beanie.  Although, on our last run she ripped the beanie off and held it in her hand.  I always take a blanket and rig up the sun shield to be more like a wind blocker.) 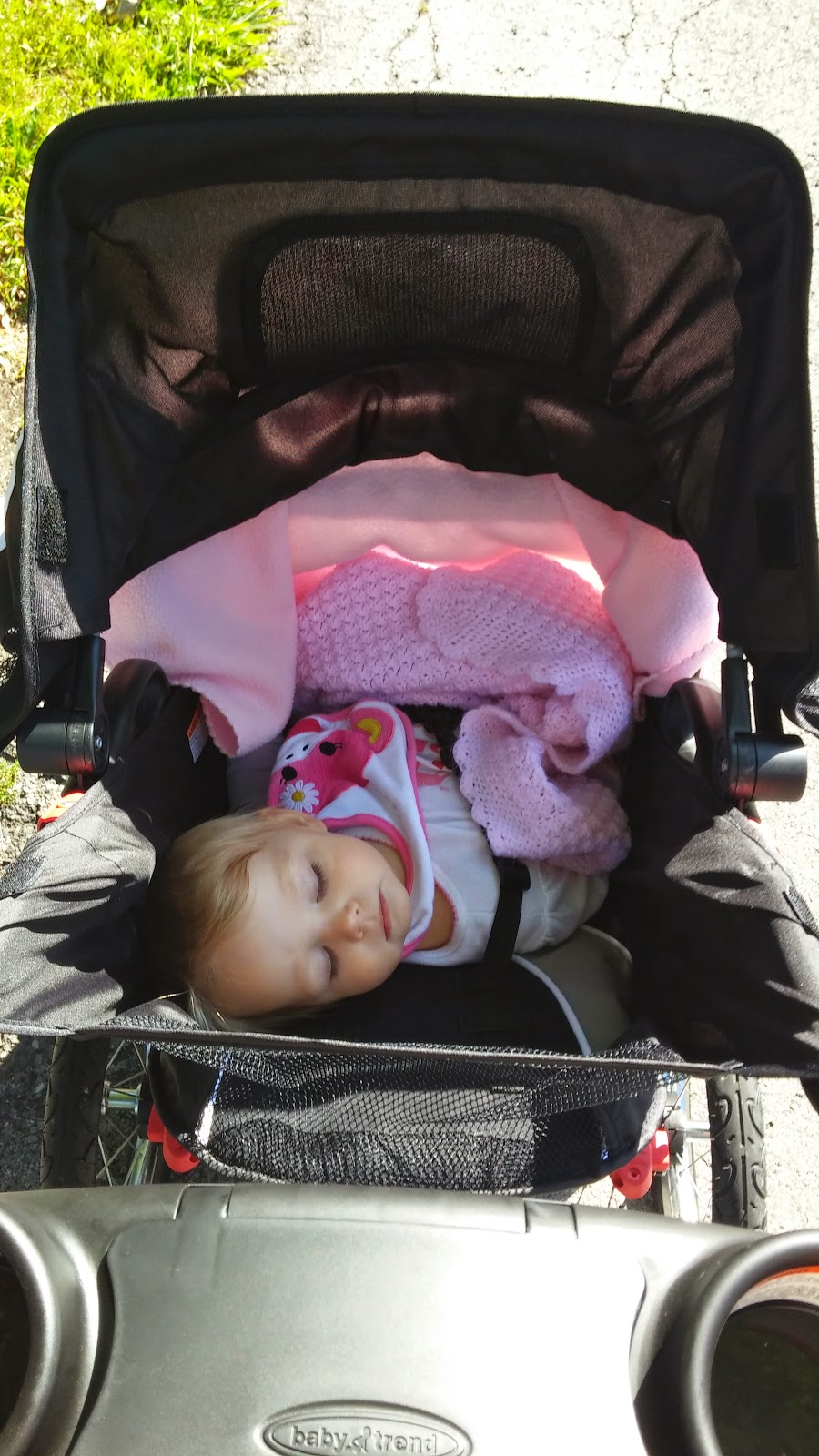 (My view while running.  Great motivation right?!  The longer I run, the more she sleeps, win-win! This is also a better view of the blanket/cover wind/sun blocker I make for her)
Posted by Unknown at 10:00 AM