Each year, our church celebrates missions week with an international dinner kick off.  All the classes decorate a table according to a specific country and everyone is encouraged to bring ethnic foods for a pitch-in style meal.  Our class decorated our table as Russia (we have a couple ladies in our class who are originally from there, so our table was authentic!).

The dinner was originally set for Sunday evening; however, a big snow storm was supposed to blow threw.  I really wanted to make Galushta (pronounced ga - looosh - ta) -- a Romanian meal my grandma taught me and made every Christmas.  Steve is not a fan of it; so I wasn't willing to gamble making a big pot, and being stuck with it if the dinner was canceled.  So I decided I wasn't going to make it.  On Sunday morning, they snow hit and they moved the dinner from Sunday night to Monday.  I decided I could make it happen!

On Monday morning, as soon as Bean woke up, we rushed to the store.  Galushta takes all day to cook, and can take awhile to prep as well.  Since it was just me doing it (plus having to watch Bean at the same time), I wasn't sure how long it would take me and felt like I was in crunch mode.  We rushed through the store and got home in time for Sesame Street.  I knew I had an hour to speed through the prep work while Bean was entertained with Elmo (that's one of her new loves).

I only had to call my mom and sister each once to answer a couple of questions.  I've helped in the Galushta making process since I was young, but never have had to do each part by myself.  I was nervous (especially since I had to substitute a main ingredient) about doing it all myself, but I found a rhythm and quickly got all the cabbage rolls made.  It took me a total of 1.5 hours to go from raw ingredients to Galushta cooking in the pot!  Bean was a trooper and even played in the kitchen during the last 30 minutes. 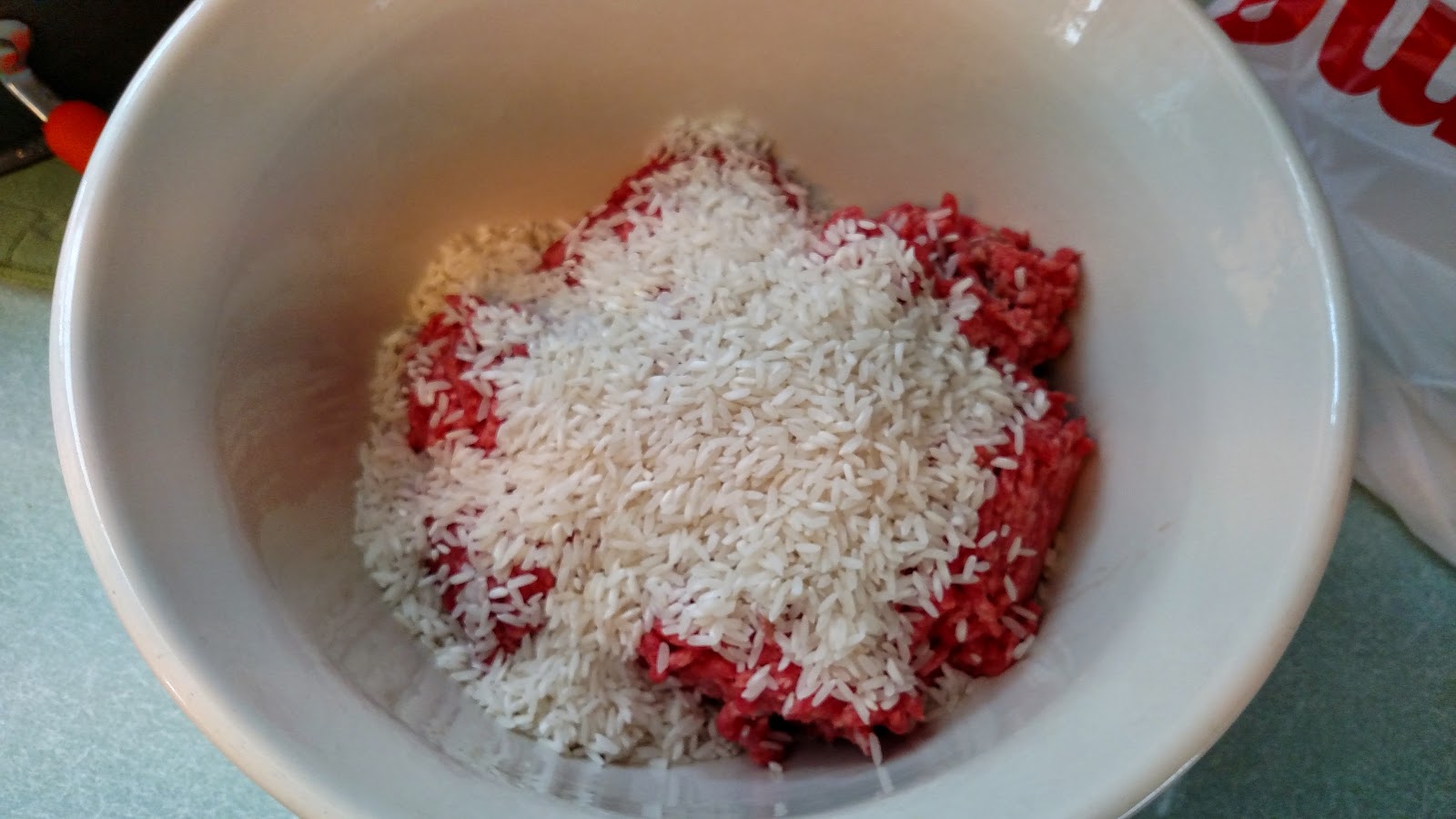 (One of the prep steps is mixing raw beef, rice and water together.) 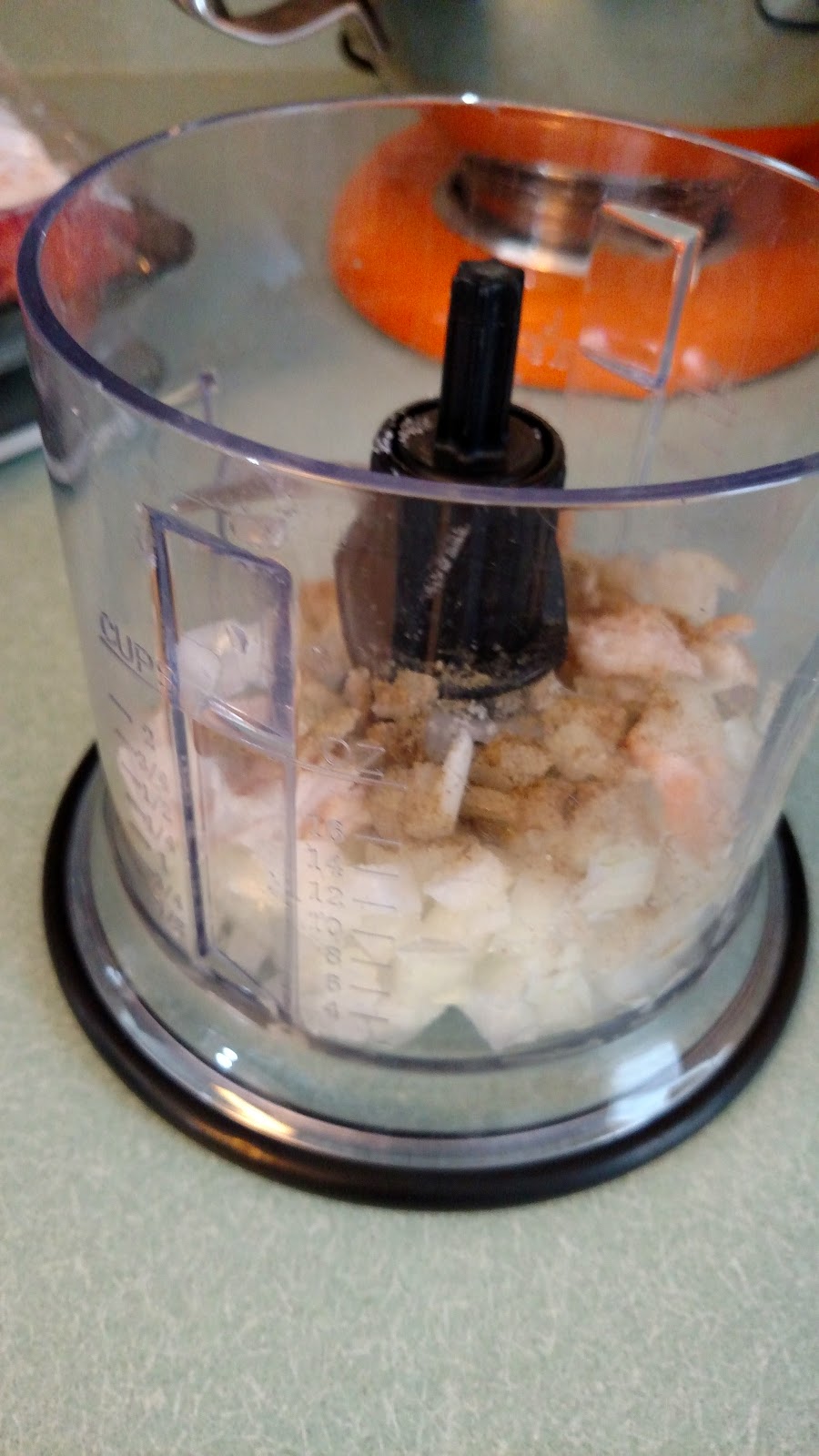 (Another prep step is -- mixing onion, the "secret" ingredient,  and salt & pepper together.  The secret ingredient is called intuda - or at least that's what my grandma called it.  It's the fat of the neck of some animal.  My grandma always had a chunk in her freezer so we never really needed to know where to get more.  But that supply has run out and it's taken some time to figure out what it actually was.  My mom told me to just find some pork jowl.  I couldn't so I substituted bacon fat.  It worked for me!) 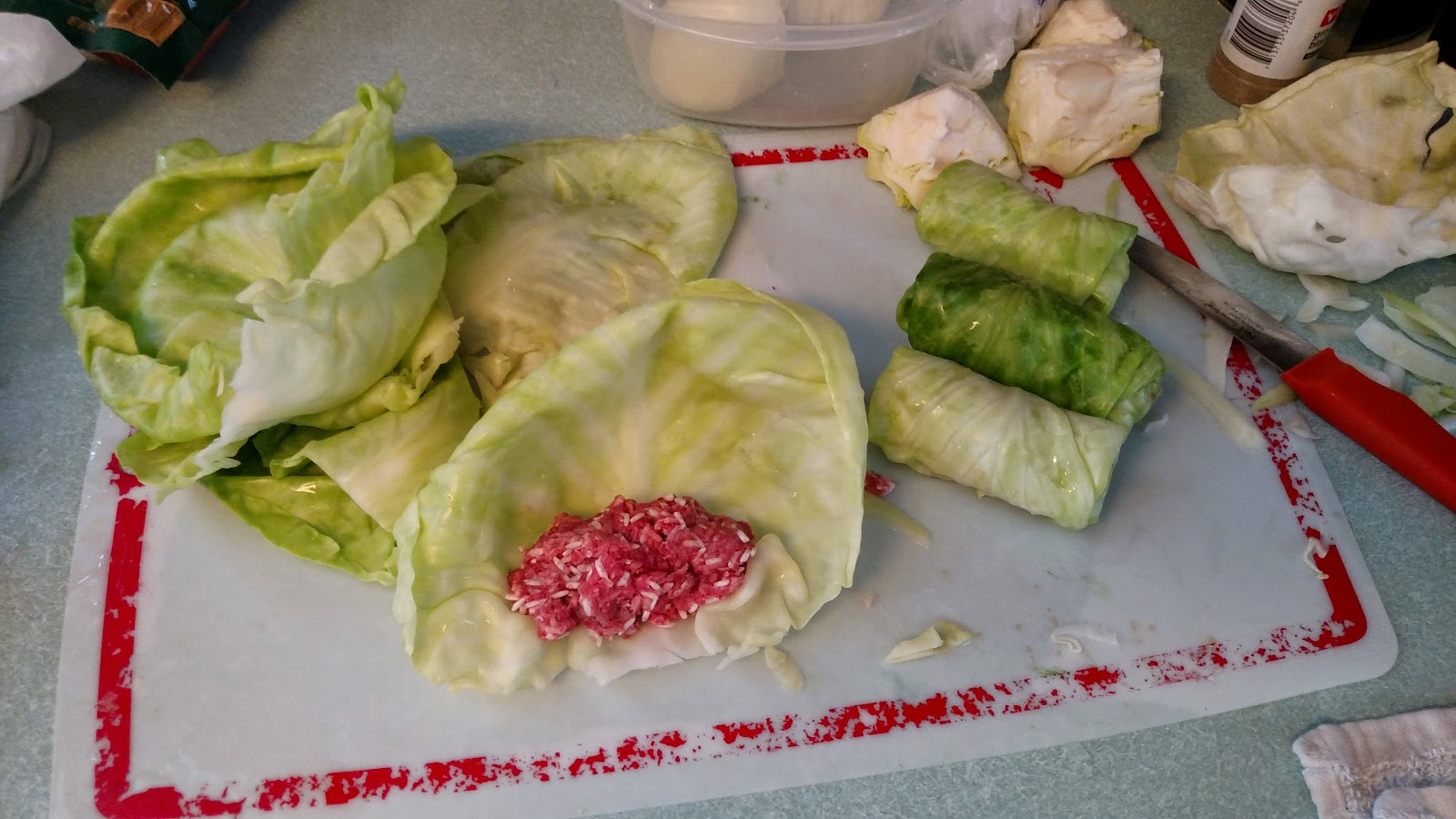 (Next came coring the cabbage and placing the hole head in boiling water.  Then you peel the leaves off one at a time.  Next you put the meat mixture into the cabbage and roll it up.  I ended up using 4 pounds of beef, 2-3 heads of cabbage, and got around 50 rolls.) 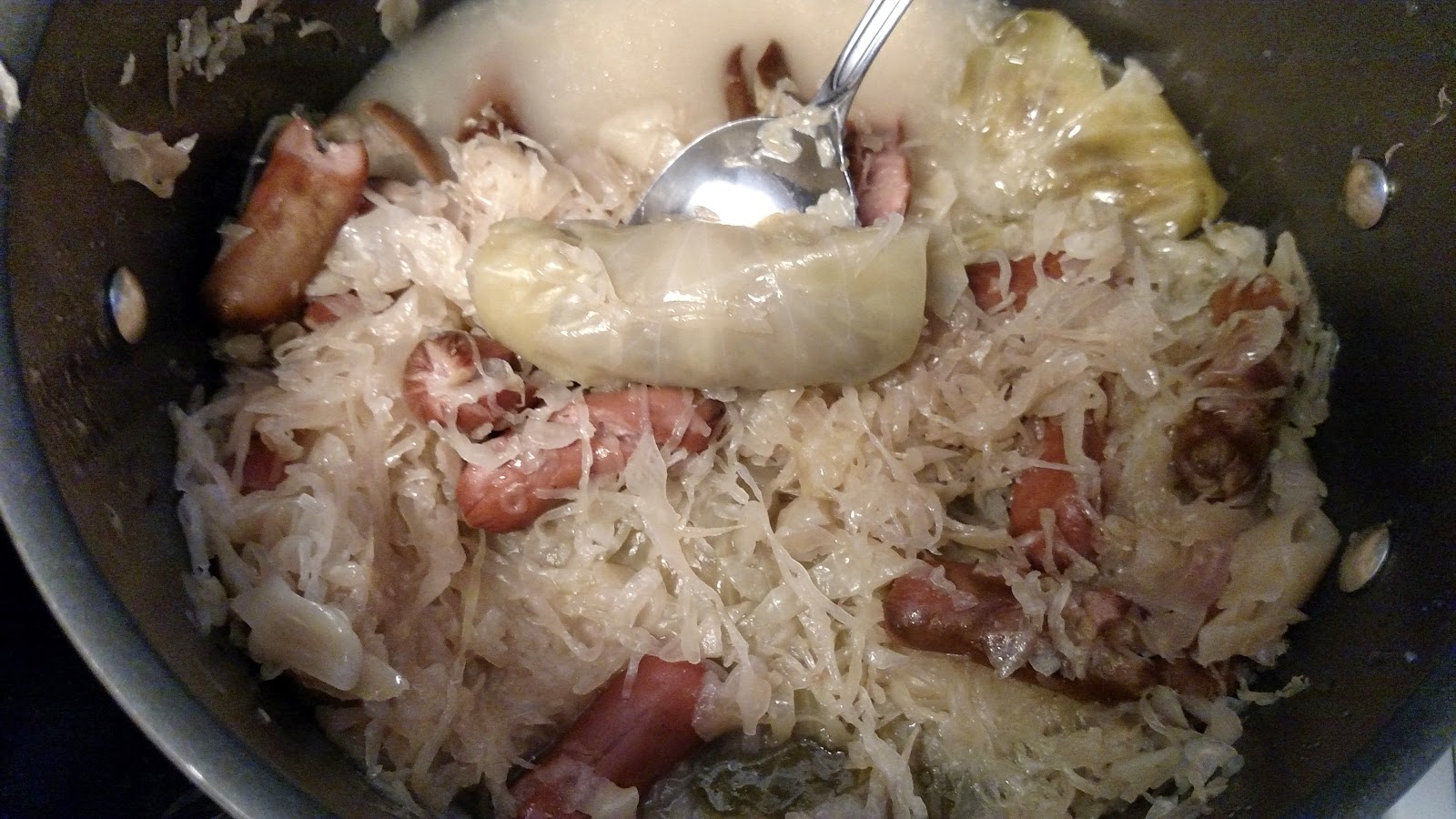 (Once the cabbage rolls are done, you start filling your pot! You put a thin layer of the onion/intuda mixture on the bottom of the pot.  Next comes a layer of sauerkraut.  Then you neatly tuck a layer of cabbage rolls so that you can easily scoop them out.  Cover with more sauerkraut and and some mini sausages.  Another layer of rolls, sauerkraut, sausage, etc until the pot is filled with an inch of clearance.) 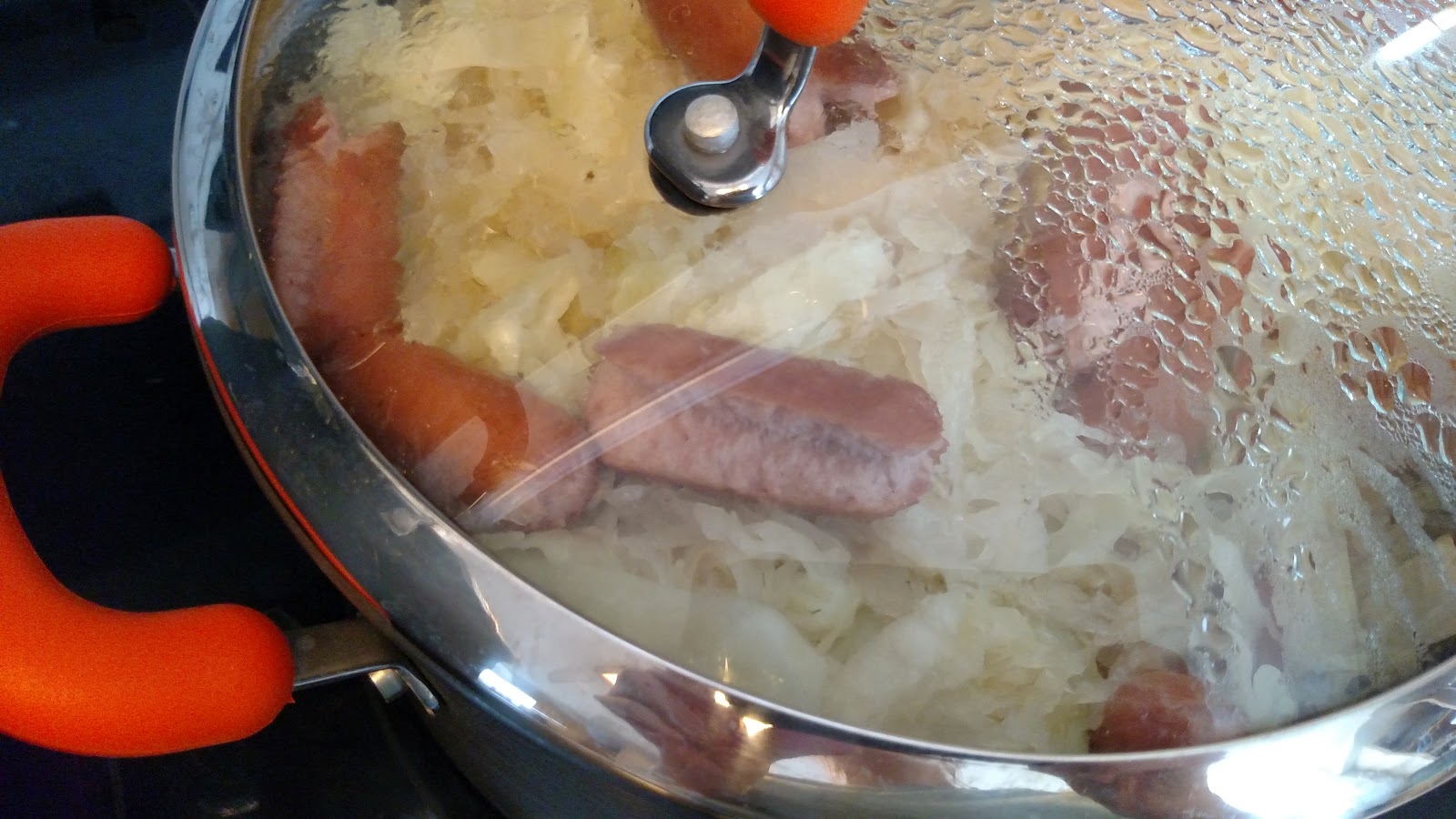 (You then fill the pot with water till you can just see it in the top layer.  Then you put on the kid and start cooking!  As it cooks, the liquid swells and you have to take some out to keep it from overflowing.  Then the water level goes back down and you add it back in. It only took about 3 hours to cook.)

I may or may not had a couple helpings of it before we made it to the dinner.  I made it last year and it all got eaten up.  This year, the attendance was a little lower so not all of it gotten eaten.  Oh well, more for me!
Posted by Unknown at 2:05 PM