Out of the Gate

I'm not really sure what actually started this, but we now allow Bean "out of the gate" a lot more than she used to be.  Maybe it was the fact that she used to be content if just left in the gate; and now, she wants to be with us (or maybe more like find more things to get into).  Overall, she does very well when out of the gate, but she still has areas she gets into, even though she KNOWS she's not supposed to.  The main areas of concern are the stairs, my Jamberry stuff (I have it in a bag back in the corner that she loves to get into) and certain cabinets/drawers in the kitchen.

I now typically spend most of my day in the living room with her.  It's too much of a hassle to take her upstairs with me when I'm trying to do something.  So anything I want to do upstairs - clean bathrooms, put away laundry, make bed, etc - I do right after I put her down for a nap but before I go run.  Her current favorite show is Sesame Street so I can typically be up and working around the house during that hour and she'll stay in the gate without a complaint.

If I'm going to be in the kitchen (making dinner, doing dishes, cleaning), I typically open the gate and let Bean roam around.  Sometimes she'll stay in the living room and keep playing (or watching a show). However most times, she'll follow me into the kitchen, then find her "usual" toys and proceed to play in the foyer.  She'll slowly make her way up a couple steps before getting in trouble and most likely being locked back in the gated area. 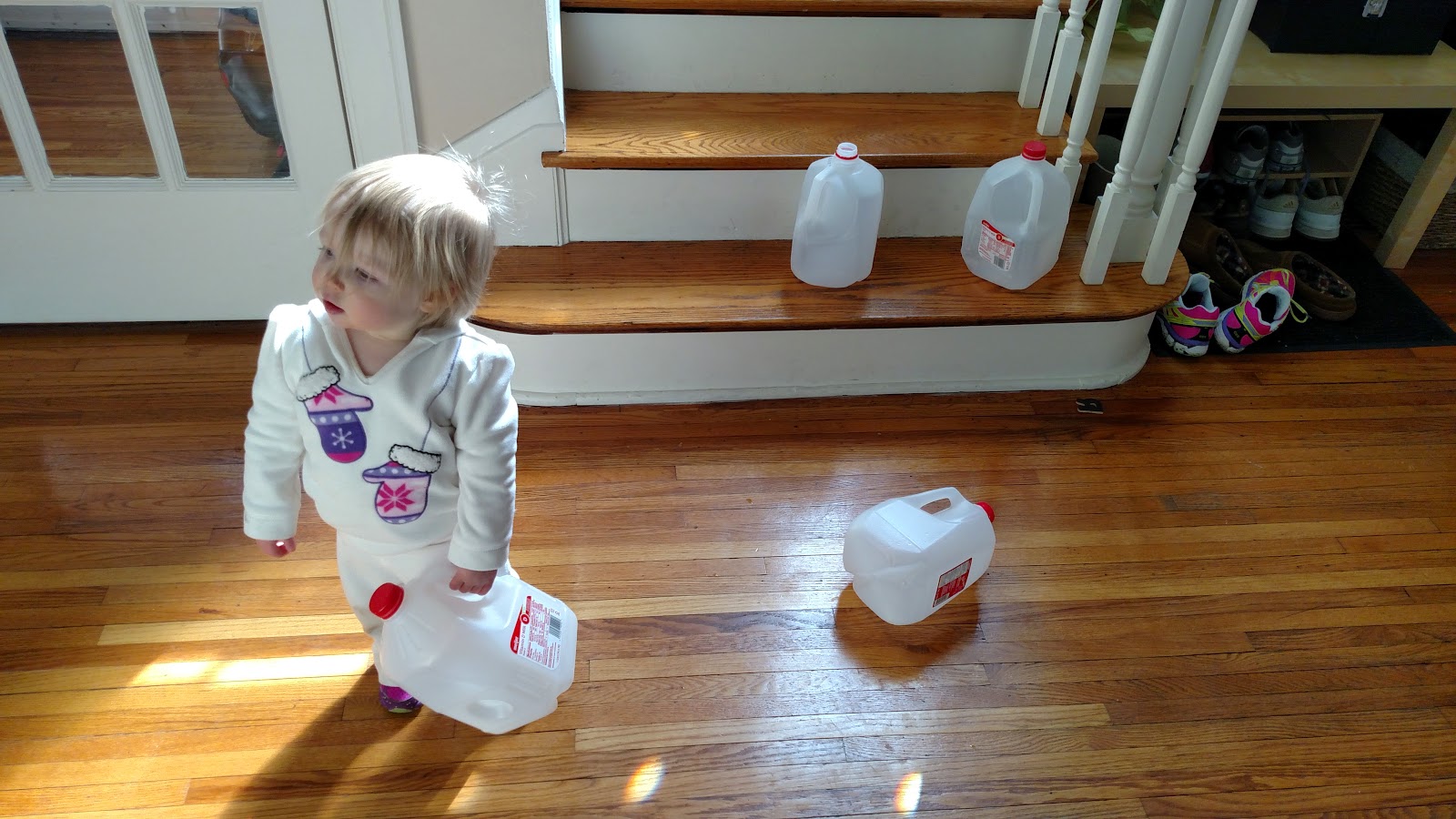 (Who says kids need toys??  These milk jugs provided hours of fun.  We had been saving them for sap season; however, the winter/spring weather has been to crazy to have a consistent sap season so we called it quits before the tapping happened.) 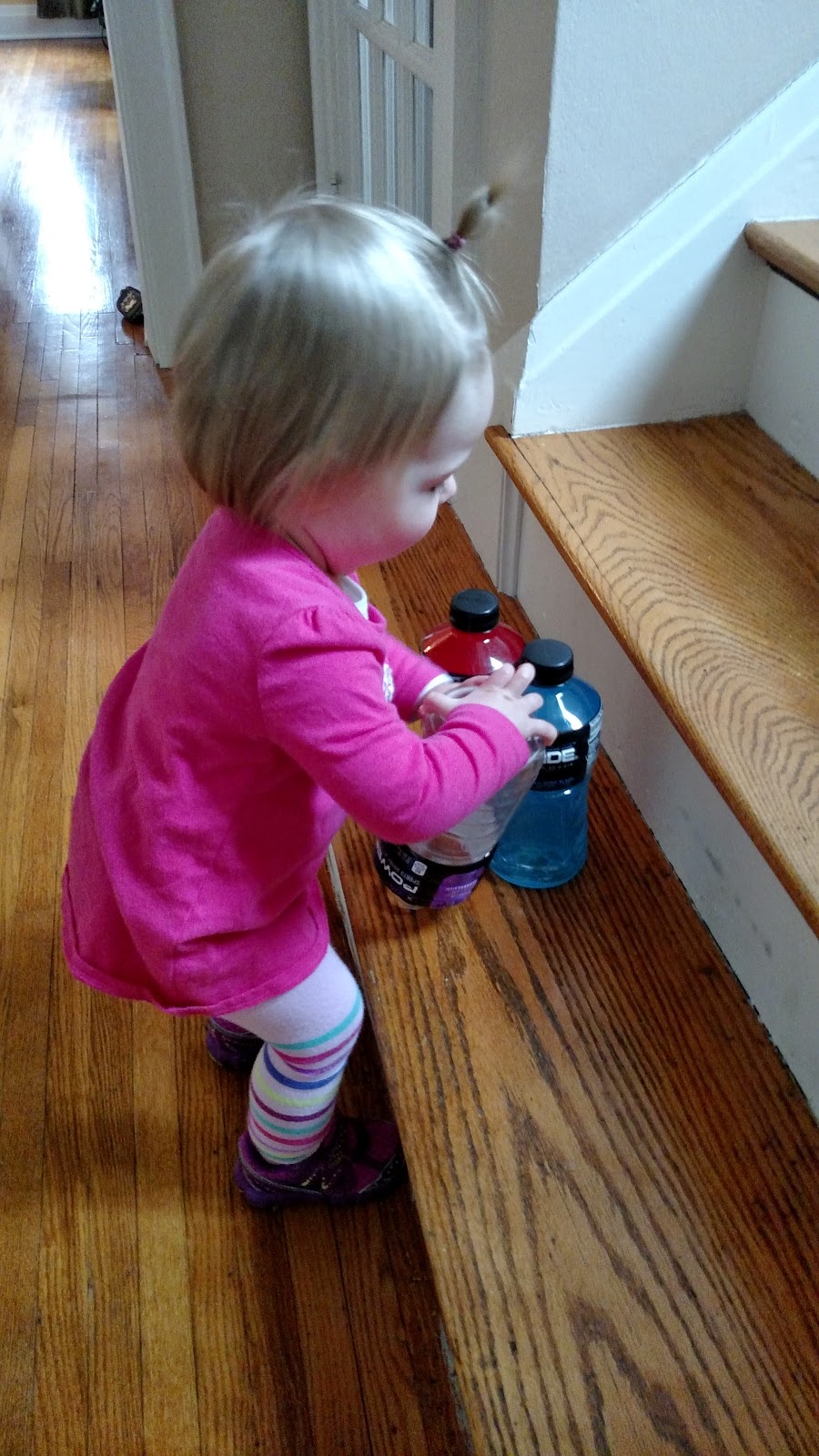 (And when the milk jugs are recycled, full Powerade bottles will suffice.  These had an extra element of fun -- getting them out of the cabinet and carrying them one by one to the steps.) 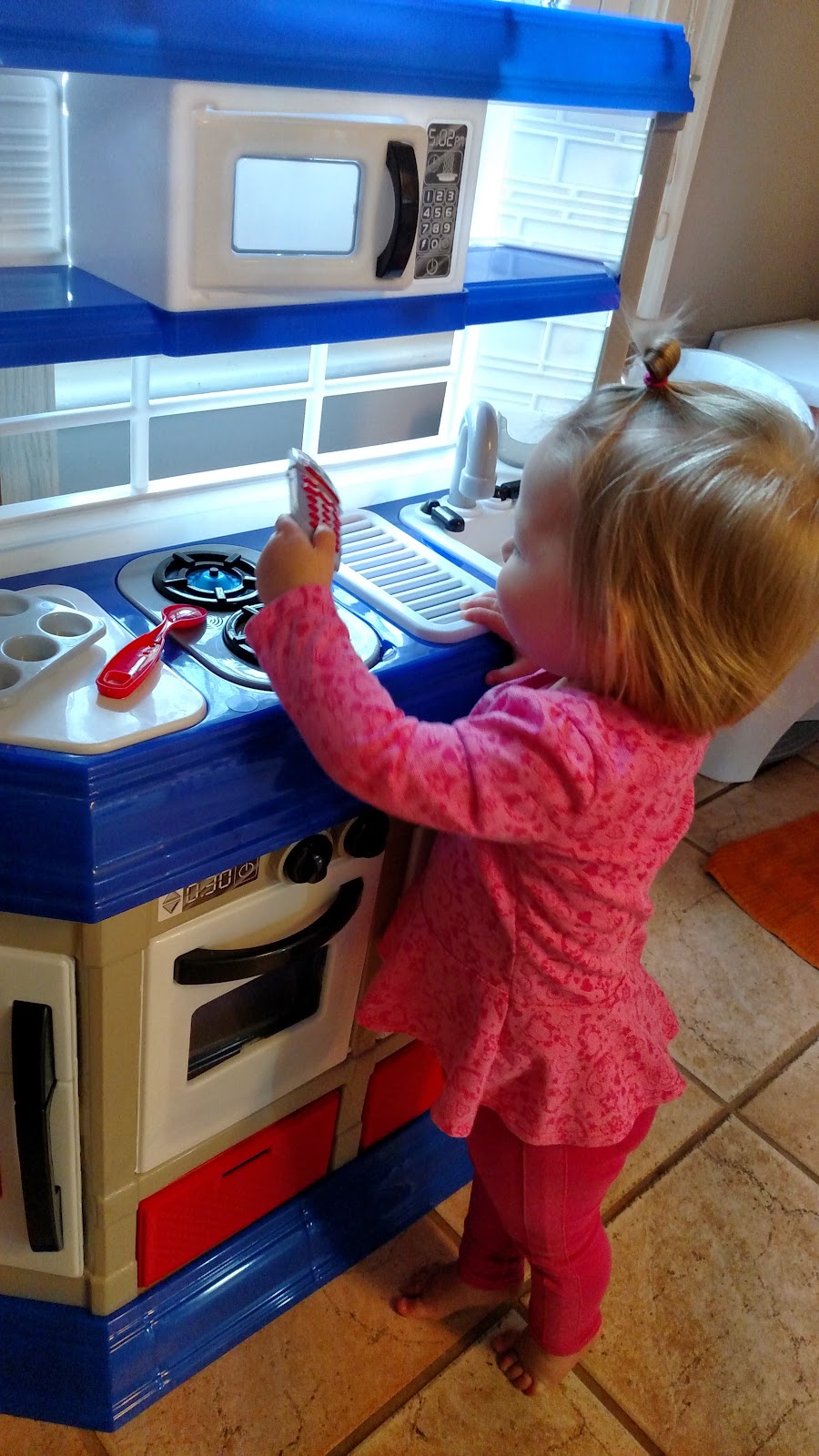 (For Christmas, my parents got Bean a little kitchen set! Unfortunately, the box was too big to fit into our car to get it to our house along with all our other crap after Christmas.  We finally made it back to Indiana and crammed this into the car! Hindsight, we should have assembled it and transported it that way, but oh well. Bean loves it!) 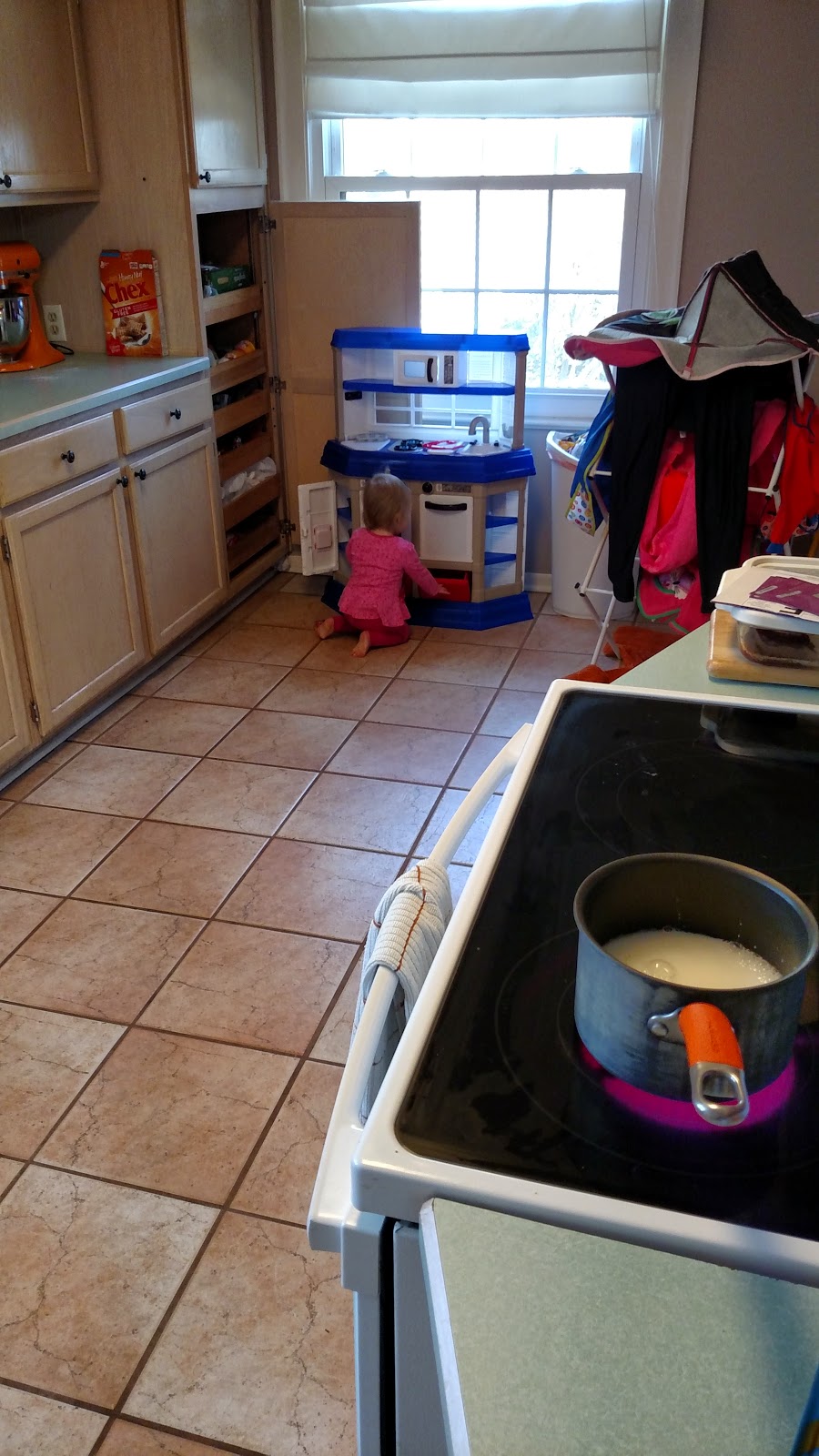 (My dream finally fulfilled -- Bean cooking along with me while I'm cooking!  I can't wait for her to actually be able to help me make stuff!) 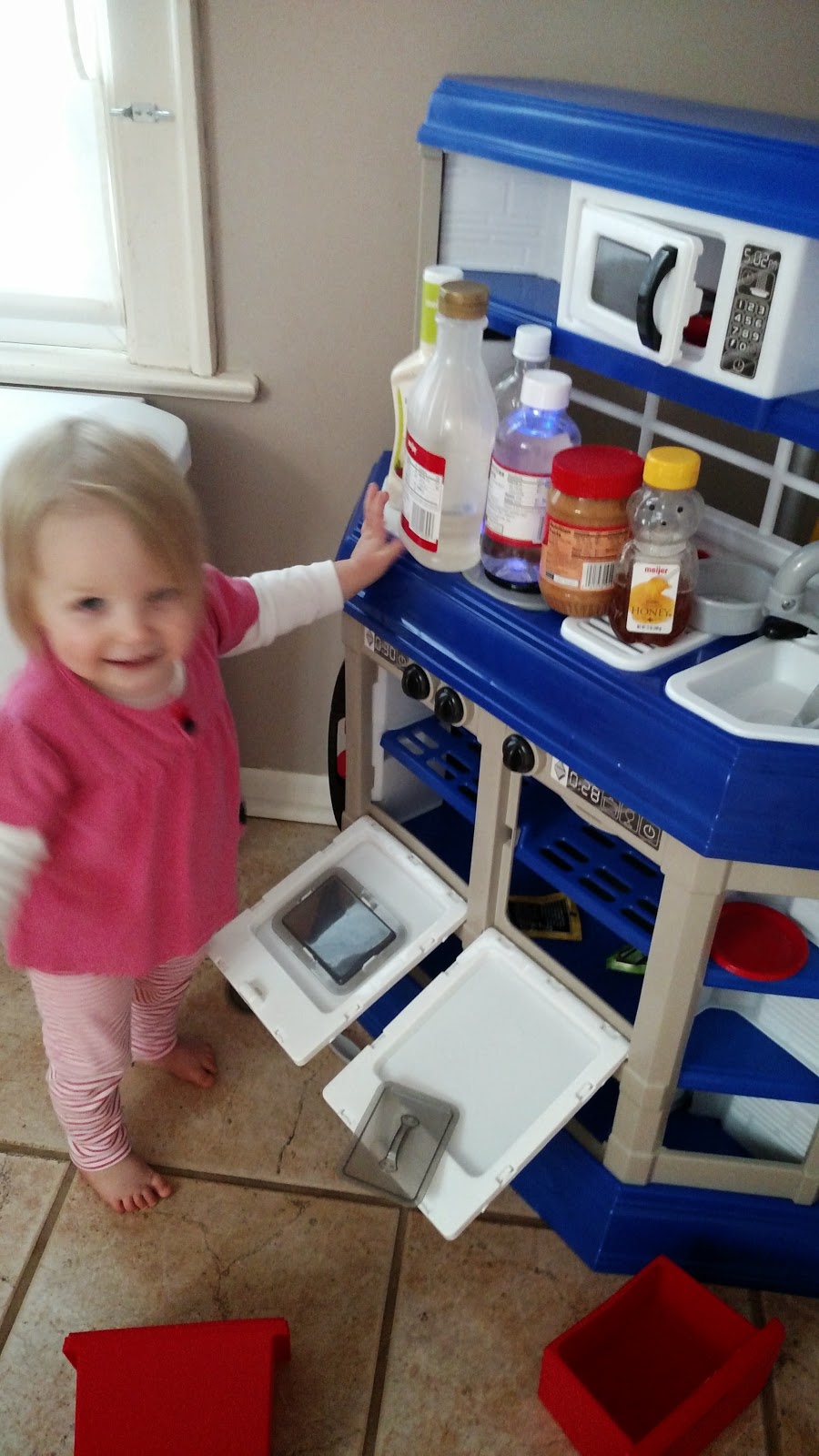 (The kitchen set came with pots/pans, dishes, utensils, and a cell phone - ha.  The set itself has a fridge, oven, microwave, sink, stove, and built in storage shelves and baskets.  She always loves having the oven doors flopped open and the utensils/pieces are typically strewn all over the house.  One day while I was cooking, I knew she was getting into my little pantry cabinet, but wasn't paying attention.  Then I looked and realized she had been "grocery shopping" for her own kitchen. She is hilarious.) 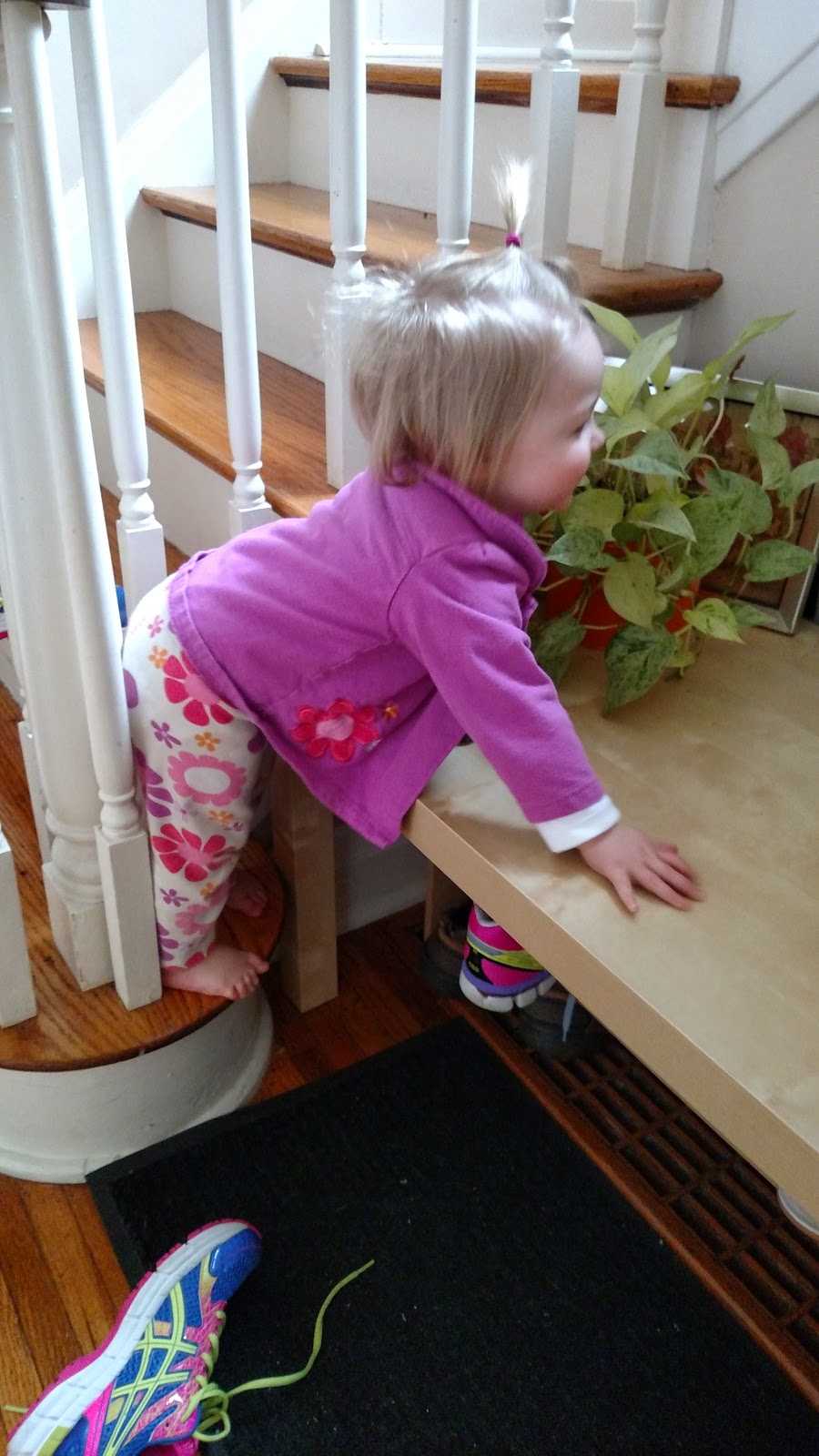 (When things get really quiet while she's out of the gate, I know something us up.  Typically it means she's making her way up the stairs.  One day I found her attempting to do who knows what.) 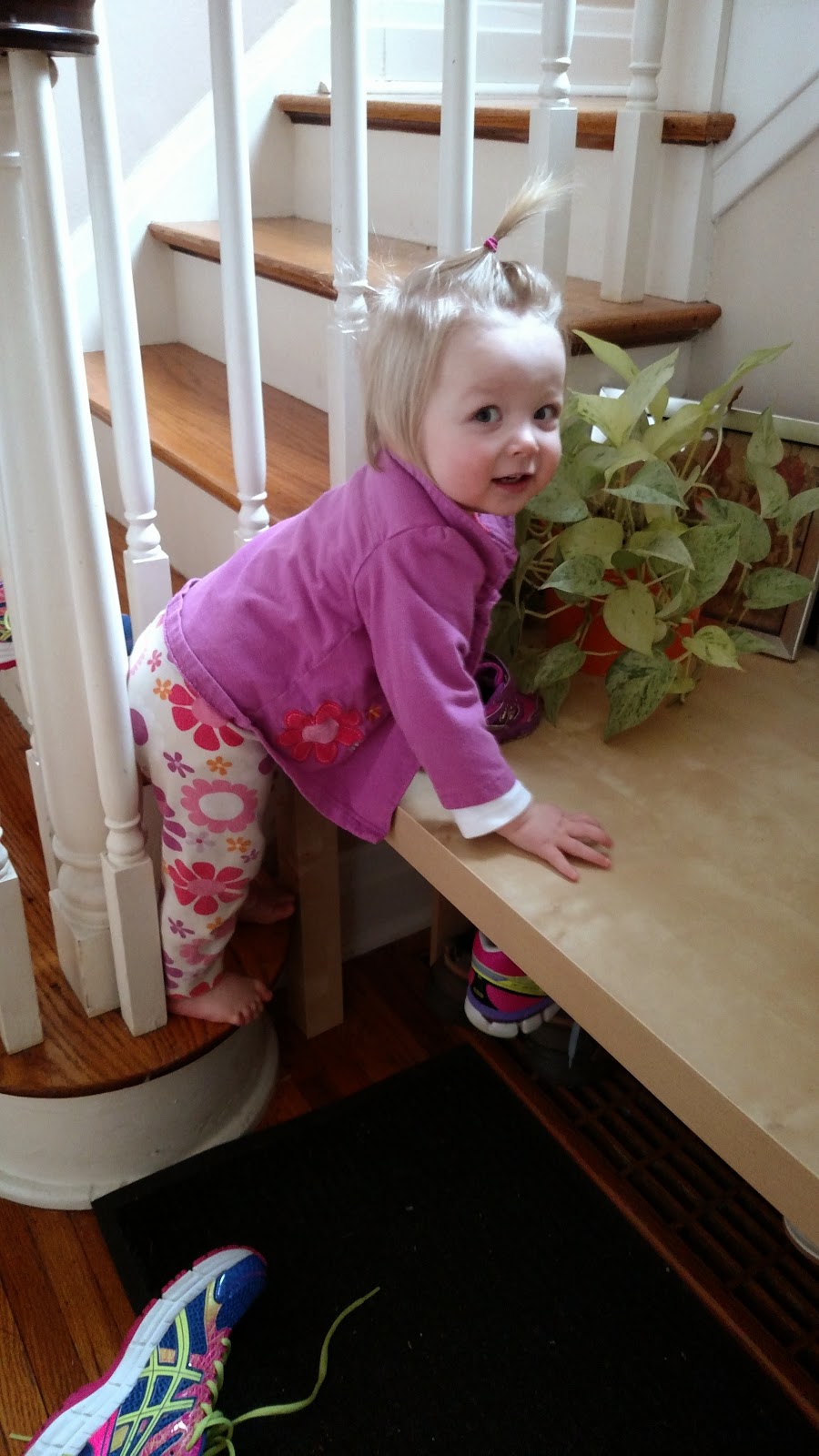 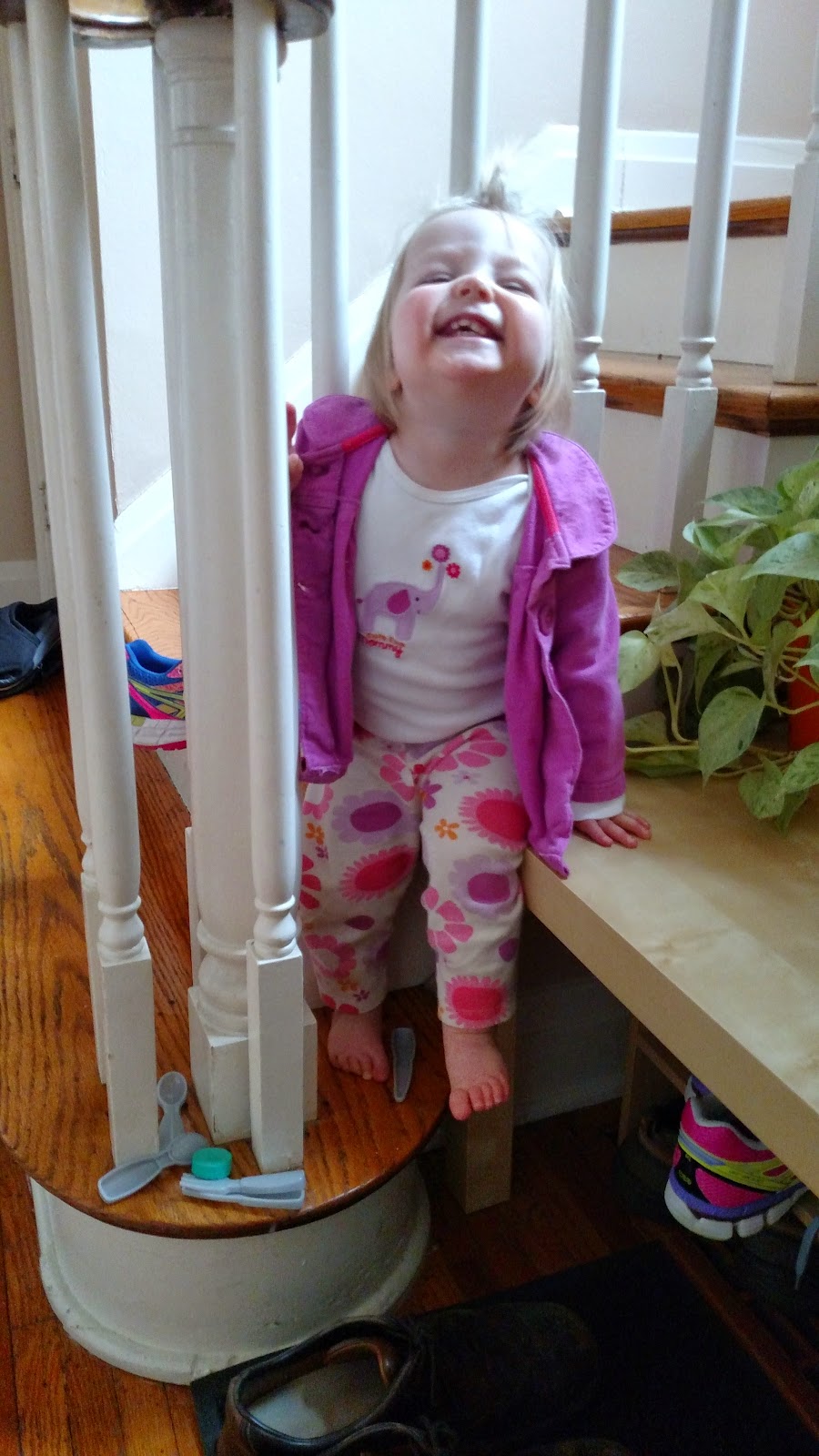 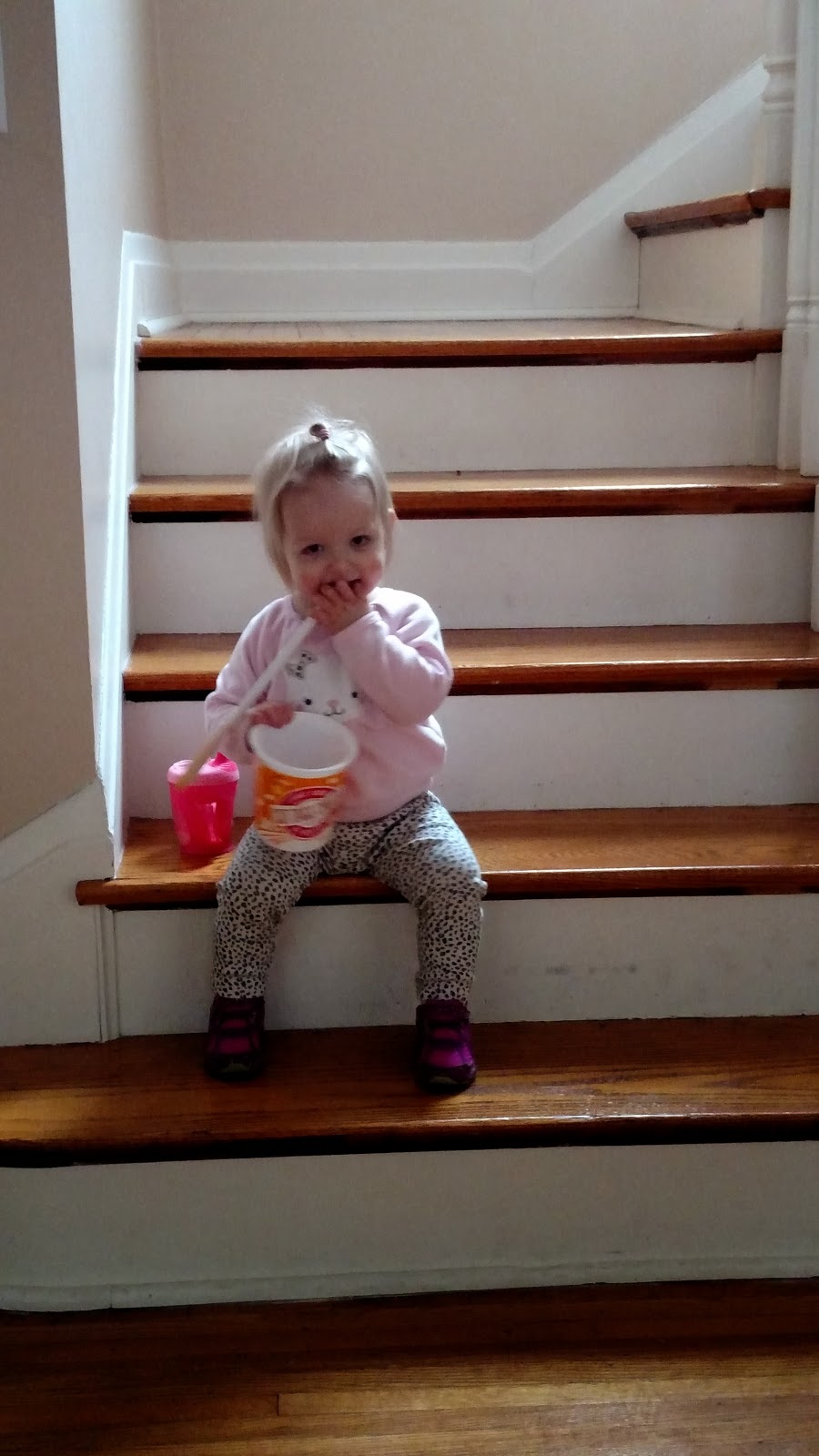 (Her favorite step -- also happens to be the highest she's allowed to go. Plus, it is also the step we sit her on so we can put her shoes on. 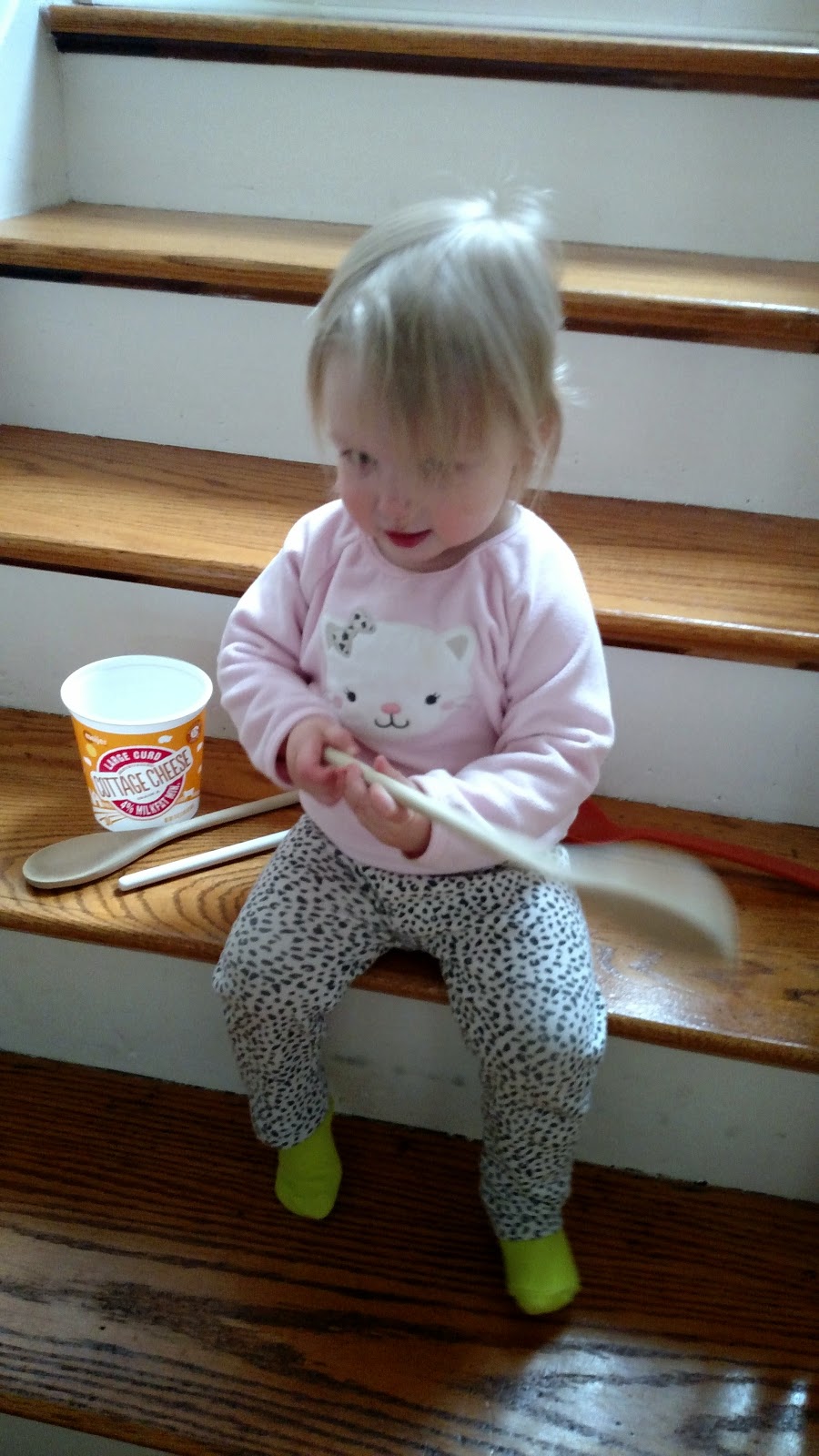 (Her toys have recently upgraded to an old cottage cheese container and my cooking spoons.  The container she pulled out of the recycling bin - a new issue we are having. One day while cooking, she came and stood by me while I was cooking and signed "please/more" and pointed to a spoon in the jar.  I had to cut her off at 4 spoons.) 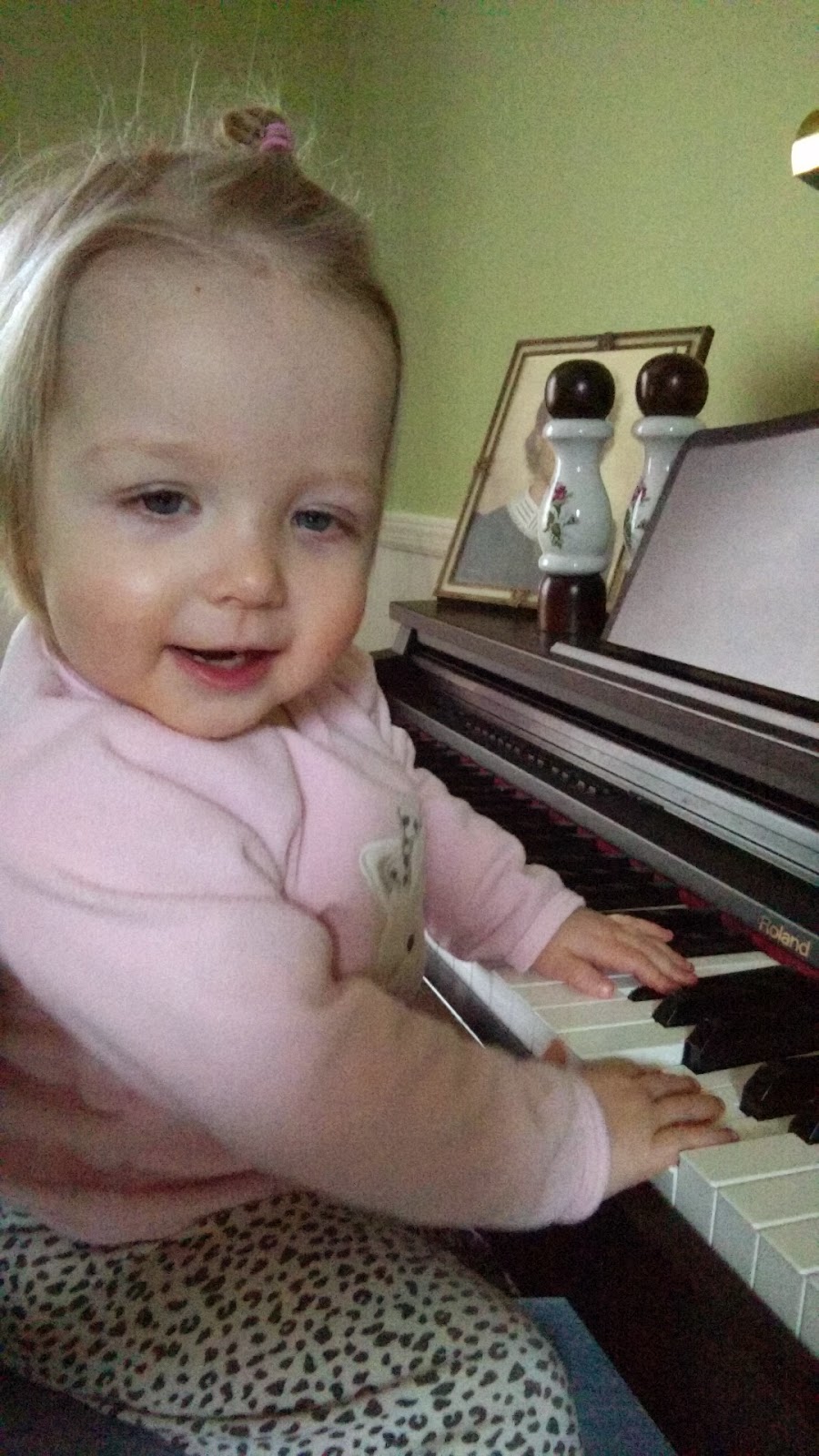 (Someone has finally realized what the piano is.  I've been tinkering on it a little more around her, but recently Steve let her play it while sitting on her lap.  She is now in love and constantly begging to play.  She's finally figured out how to open the cover and will stand and play the keys silently until one of us turns it on or goes and plays with her.) 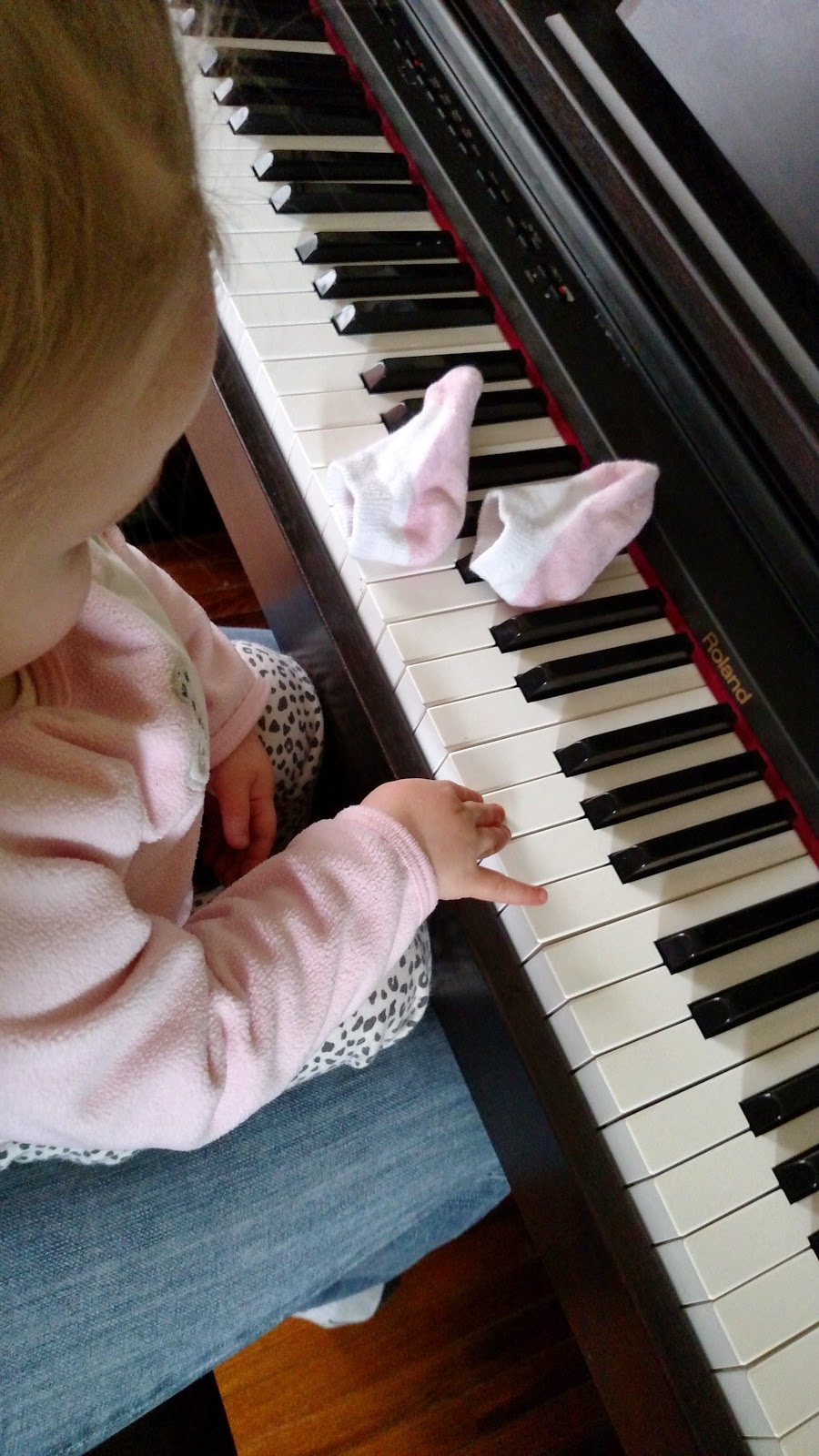 (Don't all pianists play with their socks on the keys??)
Posted by Unknown at 8:26 PM