Today was a terrible start to what should be an amazing vacation.  Steve had finally completed our intense itinerary and we were packed & on the road on schedule.

We made great time to the Columbus airport.  Check-in & security were a breeze.  We got to the gate with about 1.5 hours until departure.  Our plane was late arriving into Ohio, delaying our departure by 20 minutes.  We had a built-in layover of 3 hours at our Philly connection, so we weren't worried about the first delay.

We grabbed our last American meal for awhile (Japanese, go figure) and then began the wait to board our flight to Rome.  About the time we should have began boarding, there was an announcement explaining the plane had an issue on its previous leg & mechanics were working on it.  Our flight was originally supposed to leave Philly at 6:10.  Instead, we got to board the plane about 6:20.  We were finally loaded and began to taxi to the runway, when the pilot announced the issue had reoccurred and that we had to head back to the gate to have it looked at.

We waited for 30+ minutes while the flight crew passed out pretzels & water and the mechanics worked on the issue.  Apparently, a computer had malfunctioned and wasn't running at 100%.  However, after a diagnostic check was run, the mechanics declared the computer was fine. The pilot decided to go ahead and refuel the plane before leaving.  We began to taxi towards the runway for a second time, when we paused.  The pilot then announced that the issue was still occurring and we had to return to the gate, already 2.5 hours late.

We waited another 30-45 min when it was finally announced we would be switching planes.  We stayed on plane #1 for awhile while they were preparing the new plane.  Eventually, we were unloaded and herded into the gate area where we waited another 45+ minutes.  The aiport was pretty dead and we were going on 4.5 hours delayed.  They set up some water coolers and passed out snack boxes (had crackers, chicken salad, potato chips, cookies, almonds, craisins) to all the passengers. 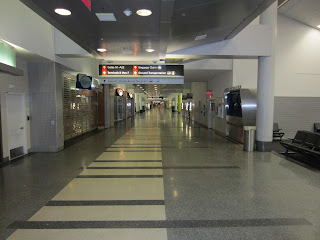 (Airport was empty and all the shops and restaurants were closed) 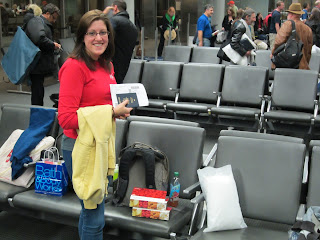 (I wasn't bothered by the delay.  I saw it as a positive because we'd actually be tired enough to sleep on the plane.  Although, at this point, I didn't realize the full impact of how the delay would affect our arrival.) 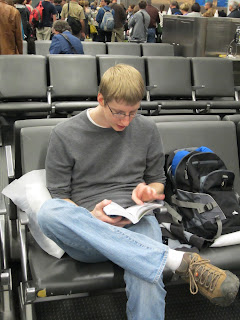 (Steve took the extra time to do more research for the trip and re-work the itinerary since we'd be losing a good chunk of the next day in Rome.)
Even though they said the new plane would arrive to the gate ready, they lied.  It still had to be cleaned up a little bit before they could reload the catering service (as well as reload the luggage).  Finally we boarded the new plane and departed for Rome (there were cheers as the plane took off) 5 hours behind schedule.
Posted by Unknown at 10:31 AM