How fitting to be arriving into Rome on the Ides of March.  Our flight was smooth and the crew worked hard to maintain a pleasant environment after the boarding fiasco.  They served dinner as soon as we were in the air around 12 am eastern standard time or 5 am Rome time.  Steve & I ate dinner while watching J. Edgar Hoover (we do not recommend the movie, very boring). After the movie, we both zonked, as much as one can zonk on an airplane.

Due to departing 5 hours late, our whole day was trhown off kilter.  Thanks to wifi at the Philly airport, we were able to send a quick email to our Rome apartment host (we stayed in people's apartments while in Rome, Barcelona & Madrid.  We found the accomodations through airbnb.com).  The original plan was to meet our host Fabio in front of a bookstore near the apartment at noon. However, we weren't scheduled to get into Rome until after noon thanks to the delay.  We sent the email asking to meet him around 2, but we never got a response, making for an interesting arrival into Rome.

We got off the plane and followed the herds to the passport check.  After getting our stamps we found the correct luggage carousel and waited.  We did bathroom stops and got Euros from an atm before the luggage showed up.  Both suitcases arrived without an issue.  We then went in search of the train.  We first purchased a Roma Pass (gives free bus/metro rides for 3 days as well as free entrance into 2 sites & a reduced ticket into a 3rd site) & our train tickets.  We validated our tickets (you have to do this at little stations BEFORE getting on the train), got on the train, and headed to Termini Station (train/bus transportation station in Rome).

The 30 minute trian ride into Rome was uneventful.  It was around 2:30 when we got into Rome and we needed to get ahold of Fabio.  We missed our new set time of 2 o'clock (which we never knew if that was ok with him).  We found phones (which took us awhile to find one that took coins and worked) and attempted to call him, but he didn't answer.  We decided to just try to find the bookstore and or the apartment and see if maybe we'd run into him (ya right).  We figured out where we were in location of the station and found the bus area.  Steve asked for help and we figured out to get onto bus 64 to get to the bookstore that we were to meet Fabio at (but we didn't know if he would still be there).

We got onto an already full bus & tried to figure ut how to validate our Roma Pass.  I attmeped to ask the bus driver but he didn't understand or care about my question (so we just rode the bus for free).  At each stop, the bus got fuller and fuller of people.  There were no names to the stops and we didn't really know where we were.  Finally, Steve decided we should just get off (we passed a landmark on the map and thought we could just navigate via walking).  However, we were like salmon swimming upstream trying to get off the bus.  By the time we got to the door, it closed and we couldn't get off.  At the next stop, we had to force our way off (which was a struggle with suitcases).

Suitcases in tow, we bgan our 3 hour trek around Rome.  We had no idea where we had gotten off of the bus and didn't even know what the name of the road was.  Street signs in Rome are unlike the U.S.  We didn't figure this out utnil later in the day, but road names are located on stone plaques on building sides.  We tried to navigate via our map by remembering we had passed that landmark, but really we were wandering blindly. We luckily found a "You Are Here" map, only there was no spotting saying "You Are Here".  We stared at the map awhile when another couple showed up.  They helped us get oriented with where we were (they had come in the opposite direction).  Now knowing where we were and which direction we were headed, we went in search of Campo De Fiori (our apartment was located in an alley just off of this square).  We headed back towards where we had gotten off the bus, but then realized we went to far.  We had to backtrack and walk back towards the sign we had found.  We finally had to make an educated guess (because we hadn't figured out yet where the street names were located), turned and walked through some back streets, and found Campo!

Campo de Fiori is a square (about 1/4 of a block in size) where people set up a market with street vendors in the morning.  When everything is sold or by late afternoon, all is packed up.  We arrived into the area (suitcases in tow) as stuff was being packed and cleaned up.  We followed the correct alley and found the apartment door entrance.  There was no sign of Fabio, and no way to enter the complex.  We decided to continue down the alley and find the bookstore we were to meet him in front of (even though we were hours late by now).  The bookstore was located at the far end of Largo Argentina (a busy area where you can get taxis, buses, and tram stops surrounding some ancient ruins).  We finally found the bookstore, but there was no Fabio.

Now that we knew locations better (the apartment and bookstore were 5 min walk from each other) we changed our focus into calling Fabio.  There were some phones located just outside the bookstore that took phone cards or coins.  We only had paper Euros.  I stayed in one location with the suitcases (completely breaking down as I imagined having to sleep on the street) while Steve went to change his paper money into coins.  He tried to the phones, but they wouldn't take the coins.  Steve was getting just as frustrated as I was, only my frustration comes out in tears and he just shuts up.

Steve decided that the coins were a no-go and went to a nearby vendor in search of a phone card.  She just pointed down the street (towards the apartment), so we both decided to head in that direction (suitcases in tow.  Oh and did I mention that there most walkways and the streets are made of cobble stone?!).  We found another little vendor with payphones on his building.  We tried them with coins, which didn't work.  We then asked him about phone cards but he just ignored us.  We decided to drag the suitcases back towards the apartment (who knows, maybe Fabio was checking the apartment randomly for us?).  Along the way, we stopped at all sorts of shops in search of a phone card, no luck.  We got to the apartment, and of course, no Fabio.  More tears and frustration ensued.

We decided to take a different alley in search of any sort of help.  I was to the point where I was going to stop anyone with a cell phone and ask them to make this call.  Steve wasn't to that point yet.  I saw a store owner helping direct someone and I told Steve to go ask that guy for help.  Steve returned shortly with a phone card in hand!!  This was the first glimmer of hope we'd had in the past 2.5 hours.  We then headed back towards the phones in Largo Argentina.  The first phone didn't work, so we found another.  Steve punched in all the numbers from the card and Fabio's number.  Fabio didn't answer, but a voicemail did.  Steve left a message and decided to try Fabio's wife's number.  We had to reenter all the numbers from the phone card again and finally someone answered!  It was Fabio!!  He said he'd meet us at the apartment in 10 minutes.  We joyously drug our suitcases back towards the apartment. 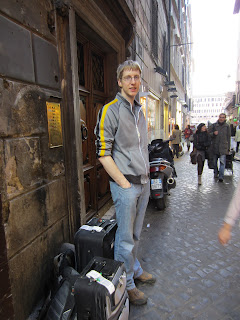 (Steve happily awaiting Fabio's arrival)
We were beyond pooped, hungry, and getting cold (the sun was going down).  I pulled myself together while we waited on Fabio.  He showed up as he said (it was going on 6pm) and took us into the apartment.  He showed us how everything worked in the apartment and had brought us some food to eat.  After Fabio left, we scarfed down the little pizzas he'd given us.  We took a moment to just relax and make a plan for the rest of the night (after all, we'd lost a complete whole day in Rome).  We headed towards Largo Argentina (a path well traveled) and headed West towards the Tiber River.  We stopped for some gelato first and then did a Rick Steve's walking tour of Trastevere area.  We backtracked the way we came and headed home after 45+ minutes.  Upon returning to the apartment, Steve discovered he had been pooped on by a bird -ha ha ha. 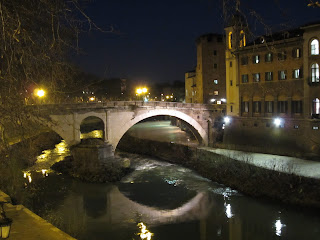 (Bridge crossing the Tiber River and connecting to Tiber Island.  The building is a maternity hospital.) 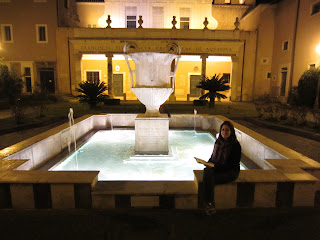 (A fountain on a stop of the Trastevere walking tour.  Notice, Rick Steve's book is in hand)

Steve then took some time planning out our next day while I unpacked and took a shower.  Steve was planning on showering after me, but I had used up all the hot water -- oops :).  We then went to bed where we crashed!
Posted by Unknown at 10:05 PM