We were awake and out the door by 8:10.  With our pre-purchased Vatican Museum tickets in hand, we walked to Largo Argentina to pick up a taxi.  We arrived well before our 9 o'clock time slot, but they let us in early anyway. 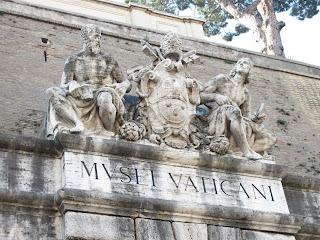 We walked around the museum with our Rick Steve's guidebook in hand.  We navigated through all sorts of frescos, statues, & artifacts and into the Sistine Chapel.  Thanks to RoninRome.com & good ol' Rick Steves, we took the "secret shortcut" into St. Peter's Basilica.  There is the normal exit that most are herded towards, which leads to the front of the museum.  When we exit this way, you then have to walk 20 min around Vatican City to get to St. Peter's Basilica.  Instead, we had to blend in with a tour group to take the group exit, which drops you off right in front of the basilica. 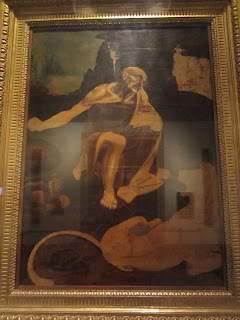 (Unfinished art piece by Leonardo De Vinci.  It's hard to see it in the picture, but there is a square cut out around the man's head that was used as a bar stool cover in a barbershop until it was returned to the painting.) 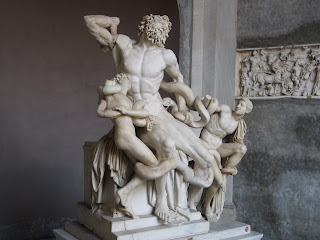 (Famous statue: Laocoön and His Sons : Here you can see Trojan priest Laocoön and his sons being strangled by sea serpents.  This piece of artwork should the breakthrough in marble work where statues could portray emotion and movement.) 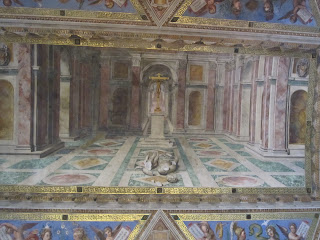 (On the ceiling in the Room of Constantine, you can see an homage to the new religion Constantine brought to Rome.  You can see a Christian crucifix has "defeated" a Roman pagan god.)
With Rick Steve's book in hand, we toured the basilica.  It's hard to grasp its size with all the ornate detail.  We left the basilica just as the Swiss Guard were changing.  Steve & I agreed they looked like a joke with their outlandish costumes & sloppy choreagraphy.  We then walked around St. Peter's Square. 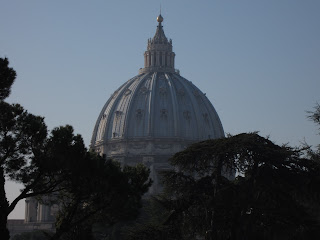 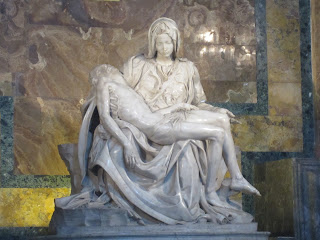 (Michelangelo's Pieta, which is now behind bullet-proof glass after someone tried to destroy it some years back) 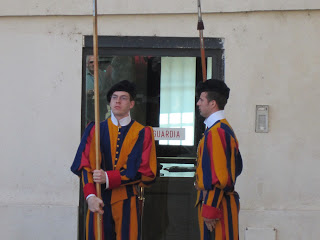 (Changing of the Swiss Guard) 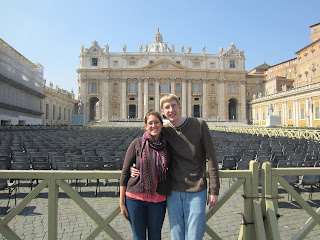 (In front of St. Peter's Basilica in St. Peter's Square)
We got done with Vatican City at noon.  We took a Rick Steve's suggestion for a sandwich shop.  We got 2 paninis & a Fanta for 12 euro.  We ate our lunch out in an open area outside the Vatican city walls.
After eating, we meandered to Castel Sant'Angelol.  Built by Hadrian as a fortress in 138AD, it has become a symbol of Rome's security from barbarians.  It's high position near the Tiber River helped defend Rome from invaders.  There is even a secret passage that is connected from Vatican City into the Castel for Pope's to hide in case of an invasion.  We goofed & had forgotten our Roma Pass at the apartment, so we had to spend 20 euro to gain access.  There wasn't much to the Castel, but it was neat to see Rome & Vatican City from the fortress.  We tried to think about what it would have been like thousands of years ago when barbarians were trying to invade Rome, it's just hard to grasp all of Rome's history.  We enjoyed the experience but would not advise the site for that price. We exited the castle and strolled over its bridge across the Tiber River. 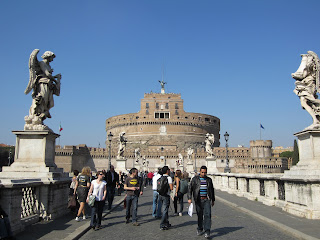 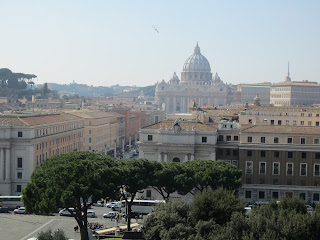 (View of Vatican City & St. Peter's Basilica from the top of Castel Sant'Angelo) 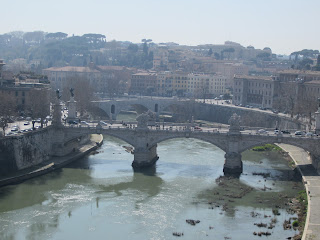 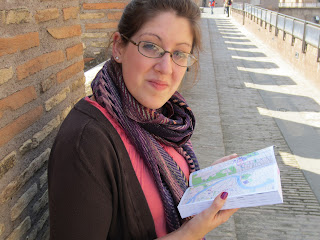 (Me using our Rick Steve's book to navigate back to our apartment)
We returned to our apartment through Campo de Fiori.  The market was busy but we were too tired to browse.  Instead, headed straight to our apartment and took a nap!
After our nap, we regrouped and set the plan for the rest of the day.  We decided on taking a Rick Steve's Heart of Rome tour.  It started just outside our apartment at Campo de Fiori.  From there, we walked to PIazza Navona and saw the Rome night life beginning.  The piazza was filling with people, street entertainers (like music, artists, magicians, live statues -- which got me every time, peddlers -- selling chotsky like "magic ball", laser pointers, & shooting lights). 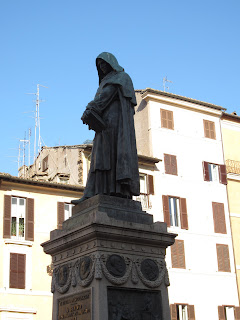 (Statue in the center of Campo de Fiori) 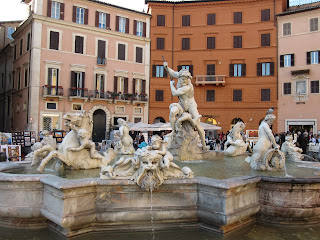 (1 of 3 fountains in Piazza Navona)
From Navona, we venutred over to the Pantheon, as we approached the netrance, they stopped letting people in because they were preparing for mass.  So we detoured from the Heart of Rome tour and did Rick Steve's church tour.  We saw two churches -- Santa Maria Minerva & Church of the Gesu.  We then back tracked to the Pantheon, which was still closed.  So we continued on the Heart of Rome tour and headed towards Trevi Fountain. 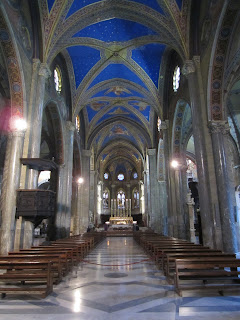 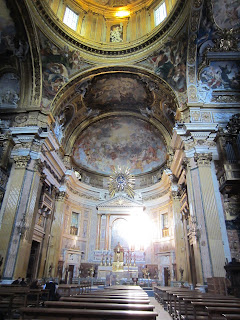 (Church of the Gesu) 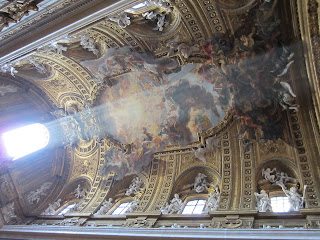 (Fresco on the ceiling at Church of the Gesu)
En route to the fountain, we stopped at Giolitti's (a well known gelateria) and got some gelato.  We got to Trevi Fountain and it was packed with people.  We felt like we had to swim through a sea of people to get to the other side.  We didn't attempt to get close, but just gaze from afar. After the fountain, we trekked to the Spanish steps, completing the Heart of Rome tour.  Only, we still hadn't gotten to see inside the Pantheon.  We took a different route back through a shopping district and finally made it back to the Pantheon.  The Pantheon was opened & we were able to go inside. 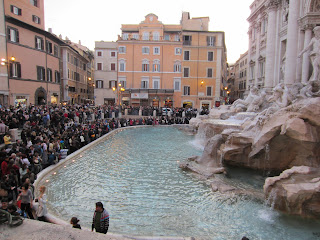 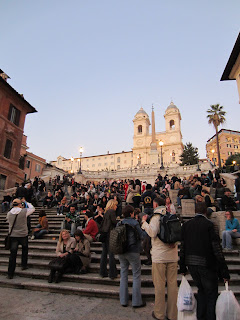 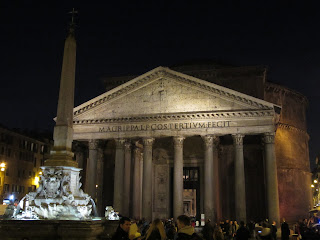 (Pantheon)
We returned to the apartment, but only to add layers, snack, and prep for another walk.  This walk was opposite Campo de Fior into the Jewish Ghetto.  This area is known as the Jewish Ghetto because in 1555 it all the Roman Jews were segregated into a gated area and kept separate from Christian Rome.  By the time we started this walk, it was after 8pm and things were pretty quiet in the area.  While there, we came upon some ancient ruins that really outlined how "tall Rome has grown (due to the many rebuilds on rubble). 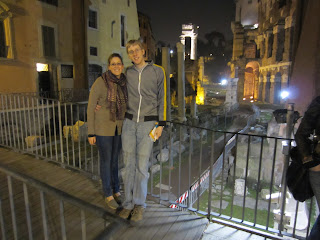 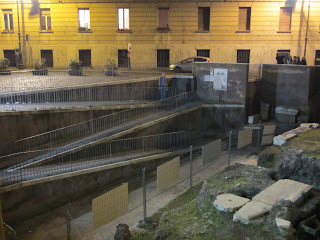 (Steve is located on the first part of the ramp, just to show scale.  Notice how "tall" Rome has grown.  The bottom of the walkway is dated from beginnings BC, where as the top is modern day Rome.  As Rome was conquered and destroyed throughout the years, it would be rebuilt upon layers of Rubble.) 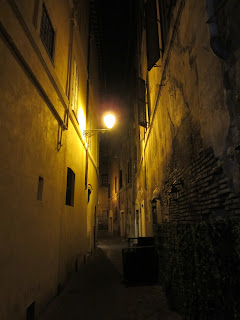 (The alley ways in the ghetto were really slim.  This was due to the fact that they had lots of people and not a lot of room.  Even though Jews are no longer confined to this area, they still make up the majority of the neighborhood.)
We returned to the apartment and called it a night.  We set a strategy to shower back-to-back without losing hot water; however, I took too long (or set the wrong time), leaving Steve with only cold water again.  Oops.
Posted by Unknown at 2:38 PM