Today was another early morning full of walking.  We walked about 35 minutes to get to Termini Station to buy train tickets for our train ride to Orvieto.  We got there at 9:05 & our train options were for 9:13 or 10:36.  Obviously, we chose to purchase the latter tickets (especially since it took about 10 minutes to go through all the steps and finally purchase the tickets).  After purchasing the tickets, Steve attempted to contact the Colosseum to book a behind the scenes tour (his European phone skills are improving); however, the underground at the Colosseum is closed right now for renovations.

With 45 minutes until our train, we bought a muffin & Fanta and headed to see the Baths of Diocletian (located just a block away from Termini).  We finally found the entrance and marveled at the ancient baths turned modern day church.  We gazed quickly and then headed back to Termini. 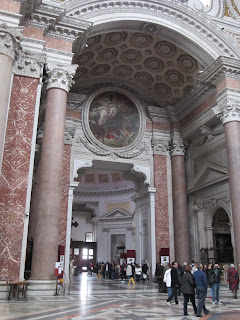 (After soaking in hot spring tubs -- used to be in the entryway but no longer present -- naked Romans would meander into the great hall area where they would socialize with each other and cool off.) 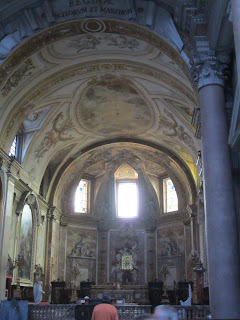 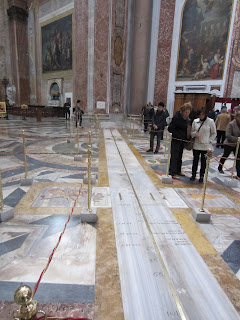 (Added to the church in 1702 is a meridian line.  It acts as a sort of sundial that monitors the Gregorian calendar and helps predict when Easter will fall.  There is a whole up in the corner of the church that allows the sun to come in and fall onto the line, marking the calendar.)
After returning to Termini, we assessed & deciphered our tickets (thanks to Rick Steve's guidebook).  We then figured out the departure signs and found the right train (we also properly validated our ticket like pros!  Thanks Rick Steves). Sadly, and especially for me, we had "reserved" seats in 2 separate adjacent cars. Steve tried to make it work and had hoped to find 2 seats together, or even 2 empty seats in the same car, but it did not work out.  Steve did make sure I was all settled into my seat (which was in a compartment with 5 other people, 4 of which were Americans) with my Kindle and then he found his seat in the adjacent car.  We didn't see each other for an hour, when Steve returned to my car for our departure at Orvieto.
After leaving the train station, we bought a ticket for the Fornicular (a tram that goes up and down the side of the hill Orvieto sets upon) and rode it up the hillside.  The tourist information (located at the Fornicular's exit) was closed, but it had a sign stating there was another location near the Duomo (big cathedral).  However, we had banked on getting a map from the TI to be able to get to the Duomo.  Luckily, there were signs pointing the way to the Duomo.  After a brief uphill 10 min walk, we got to the main square in front of the Duomo.
We went into the TI & got a map of Orvieto.  We assessed the sites we wanted to hit, what order we had to do it in (according to their open times), and how much money the day would cost us.  There was an option to purchase an Orvieto card that got you into certain sites at reduced cost; however, it wouldn't have saved us any money so we just paid at each site.  We started by trying to find the underground Etruscan passages.  We got close to where we thought should be a path, and discovered a sign explaining you had to buy the tickets at the TI.  So we returned to eh TI to discover it was closed for the afternoon (we were literally gone maybe 10 min).  Oh well, we had to scratch off the Etruscan passages (which we were both looking forward to) from the day's itinerary.
We re-worked the plan and visited the Duomo.  We paid 6 euro to enter & wondered around aimlessly inside.  There were no brochures or descriptions of its inside.  We left the church and began to head down the street when I discovered a little stand with brochures for the Duomo!  We picked one up and it had detailed information of the pictures and statues on the outside as well as information on stuff on the inside.  We sat outside the Duomo and read through the pamphlet to take in what we had just seen. 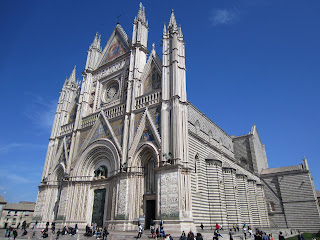 (The Duomo is constructed very differently from the previous churches we visited in Rome.  It was more Gothic and less ornate, especially on the inside -- no pictures allowed inside.  You can see form the side that it is made up of white and black stone instead of marble like the Roman churches. 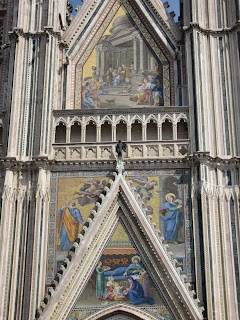 (The front facade decorated in mosaics about the Virgin Mary) 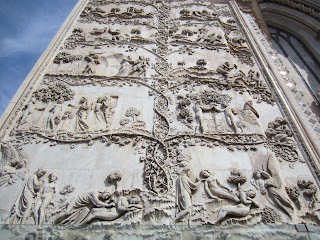 (There were different sections of carved marble that told stories from the Bible.  This section depicts stories from Genesis.  Notice the bottom right picture is God taking Eve out of Adam's side)
Next, we went to Torre del Moro where we walked up a tower that is 154 ft tall.  Here, we got a 360 degree view of Orvieto and its surrounding hills & farmland.  We left the tower and trekked towards the Necropolis (excavated Etruscan tombs).  We weren't exactly sure how to get down to the Necropolis, but found a pedestrian trail that led from the the top of the hillside down to where we needed to get.  With some friendly help, we were pointed in the right direction. 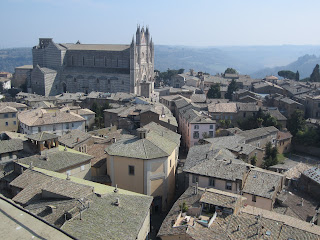 (View of the Duomo from Torre del Moro) 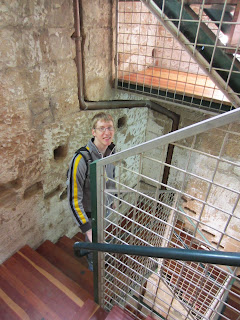 (Walking down the stairs inside Torre del Moro) (Walking down the pedestrian walkway towards the Necropolis.  We had to walk from the top of the hillside down to the bottom to reach it.  I am standing in front of the old walls of the city.) 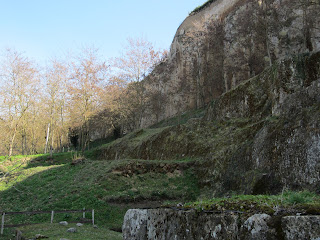 (Here is a view of the hillside we walked down)
We got to the entrance of the Necropoli Crocifisso Del Tufo, but were denied the reduced price (ages 18-25), apparently it only works for EU citizens.  I didn't think quickly enough to fake a German accent.  Oh well, how many times can you say you've been inside a 1000+ year old tomb?!  After looking through the tombs, we both realized we had to walk back up to the top to continue our tour of Orvieto. Several stops & lots of water (p.s. We brought one of those Brita refillable bottles with us on the trip, which I would highly recommend), we were back to the top & continuing the loop back to the main entrance of Orvieto. 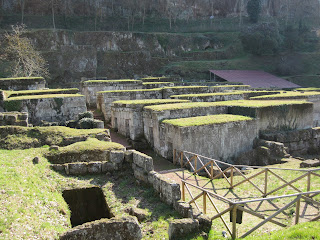 (Overview of of the Etruscan tombs in the Necropolis) 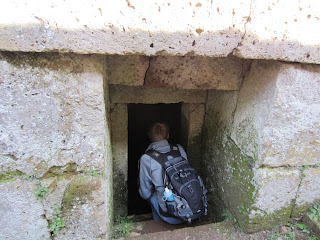 (Steve pondering about what the tomb would look like thousands of years ago.) 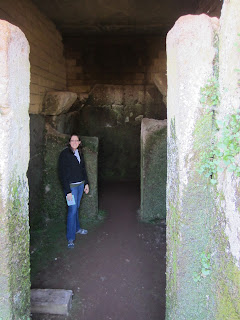 (Me reveling in the fact that I'm standing inside a thousands+ year old tomb.  Also note that in almost all the pictures of me, I am holding either a map or Rick Steve's book.  I was deemed navigator and I never allowed those items out of my sight.)
Once we got back to the top of the hillside, we completed the loop around Orvieto and found St. Patrick's Well.  The well is compromised of 2 spiraling staircases with 248 steps each.  One is for ascending, the other descending.  They are engineered separate of each other (don't touch or intersect) in order for them to walk donkeys down one set, and up the other set, without crossing paths.  Needless to say, the stairs were pretty tiring to get back up to the top. 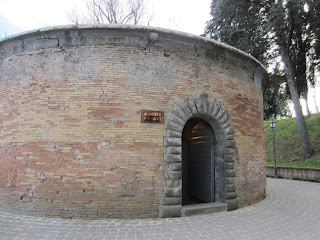 (The outside of the well.  There were two doors on opposite sides-- one to enter, the other to exit.) 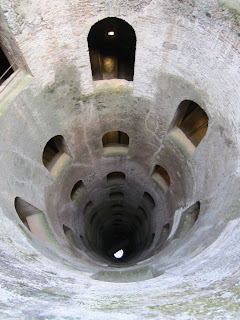 (Looking down into the well from inside the top.) 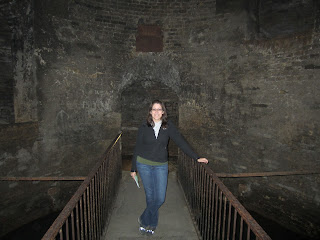 (Picture at the bottom of the well, where you crossed from the descending staircase, to the ascending staircase.  There was water in the bottom of the well, about 6 inches from the bottom of the platform I was standing on.  And of course, there were lots of coins and various items thrown into the water).
After the well, we grabbed some sort of ham/cheese flat bread quesidilla & a coke and ate in the garden of Orvieto's old fortress's remnants.  We then took the Fornicular back down to the bottom & waited for the train.  We had an open return ticket (2 month time period where you can use the ticket on any train from Orvieto to Rome).  This train ride, we got to sit in the same car, but not next to each other.  I sat in a seat directly in front of Steve.  We got to Termini & bought a sandwich.  We ate it while walking towards our apartment.  We had hoped to visit a museum before it closed, but knew the time wasn't going to work out.
Along the return to the apartment, we walked through a section of Rome that was surrounded by flashing police cars & armored policemen.  There was a helicopter repeating the same grid section overhead.  The police were even diverting traffic in some sections.  We never figure out what was going on.
When we got to Largo Argentina, we decided to pass by our apartment and continue to Piazza Navona again.  Along the way, we witnessed a mom helping her child pee in a street grate by a busy street corner.  The piazza nightlife was dimming by the time we got there, so we just decided to return to our apartment via Campo di Fiori.  We stopped at a gelateria and split a gelato.
We got home and began to prep for the next day.  I took my shower while Steve set all the plans for our next day.  Steve decided to no longer attempt showering at night after me, since 1 shower would use up all the hot water.
Posted by Unknown at 4:25 PM