I just did a quick search back through my posts about my pregnancy and realize that they are severely lacking.  Not because I don't want to share, but because nursery, house projects, and travel have seemed to dominate the blog.  Since the end of my pregnancy seems to be rapidly approaching, I guess it's time for an update.

This week marks 32 weeks of pregnancy, meaning I'm in my 8th month -- absolutely crazy!  It's hard to believe we're less than 8 weeks away from meeting our Baby Girl (that is if she comes on time!).  We are still having freak-outs over becoming parents, but we're embracing it a little more, especially now that we have almost everything we need for her.  Having her room finally come together has definitely attributed greatly to our preparedness!  We're waiting on our last big piece of furniture (glider) to arrive by next week and then I have my last baby shower next week.

My pregnancy thus far has been really easy.  I was fortunate to not have morning sickness, just some random nausea and extreme fatigue during 1st trimester.  2nd trimester was a breeze.  I got all my energy back, started feeling little Bean rolling around, and often forgot I was pregnant.  3rd trimester hit and things have gone a little downhill - haha.  Her movements have become more irritating and painful at times.  I get jabbed in the ribs and punches in the bladder quite a bit.  She also will randomly decide to move her entire body rather quickly from one side of tummy to the other side quicky; which results in my stomach shaking and a very weird sensation.  I also have heartburn really bad.  Scratch that.  I have SEVERE heartburn.  Just drinking a glass of water triggers it.  I constantly feel like flames are going to shoot from my throat.

For awhile I would just pop Tums like candy.  Then I tried Prilosec and it worked fairly well, but then I read online that it could be questionable for pregnancy (even though my doctor said it was okay).  I then switched to Zantac 75, which helps for about 4 hours after taking the pill.  When you can only take 2 in 24 hours, that leaves 16 hours of heartburn!  And I feel every hour of it, even in the middle of the night.  So I'm giving back in and going back to Prilosec.  Food and nourishment with the risk from Prilosec for Bean is winning over not eating and having the heartburn.

Only other thing that is new in the 3rd trimester is lots of backaches and leg aches.  If I'm up on my feet too long, I can feel them swell which causes them to ache.  I try to take rests and keep them elevated, but there's still so much to do!  For now, I am just "treading water" in upkeeing house work and trying to get little projects done here and there.  Lucky for me, a lot of what is left to get done doesn't require lots of standing. I still get up several times at night to pee and toss and turn a lot to get comfortable.  I've discovered if I take a shower before going to bed, I tend to sleep a little better.

Doctor appointments have been going well and really fast!  It seems like I just pop in the office for them to hear the heartbeat and make sure I'm doing well.  The last time I went, they measured my tummy, but never said anything about it.  I know I haven't gained a ton of weight (maybe around 25 pounds? My goal is 30) and everyone says I look smaller than 8 months.  Here's hoping to a small baby!  My next appointment is around the corner, then I go in 2 weeks, then weekly after that!  Ahhh!

I had to have a Rhogam shot (right in the rear) at 28 weeks because Steve and I have incompatible blood.  His is positive and mine is negative.  If baby's blood is positive, my body can build up antibodies which will cause problems with future pregnancies.  I'll have to have another shot right after baby's birth.

Another thing we can check off the "Before Baby list" is our birth class!  We didn't know what to expect and were sort of dreading it the closer it got to the class.  But we are really glad we followed through!  It was just a one night class (with pizza!) that involved several videos, question/answer discussions, and a tour of the hospital.  We're still not 100% clear on where to check in at (but our doctor will let us know) but we feel comfortable with the hospital stay side of things.

I've kept up with taken my weekly pregnancy photos.  Instead of posting every week's picture, here is one from the past 3 months, catching you up on the bump growth: 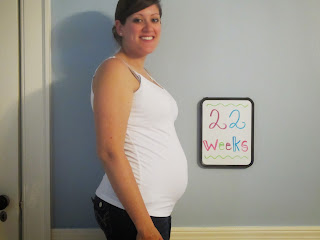 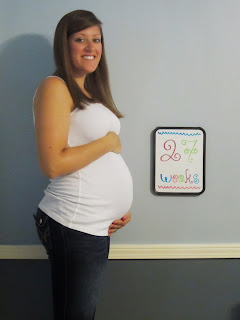 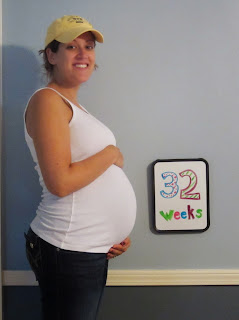 (August -- 32 weeks - whoa baby!  Sometimes I don't feel like I look this big, then there are times I feel like I'm bigger - haha!  And look at how tired I am.  I took several shots and my face was the same in each one.  Some things you just can't hide!)
Posted by Unknown at 9:55 AM