I thought my sister was crazy when she said, "Let's re-do the baby changing table!  I'll strip the finish off for you in no-time!"  Okay, I knew my sister was crazy way before that statement, but I didn't think she could strip the finish off in 2 days.  Plus, I wasn't sure if I was willing to take on such a big undertaking this late in the pregnancy.  But boy am I ecstatic at the "new" changing table!  Definitely worth all the effort and money!

For about $50 and a week's worth of hard work (and help!), we have what looks like a brand new white changing table for Bean!  The changing table was originally purchased back in 2003 for around $400 for my sister before her oldest daughter was born.  She used that changing table for all 3 of her girls meaning the piece was well used and loved.  Last fall, they went through all their baby items and decided it was time to get rid of them all, meaning Steve and I got dibs on what we wanted.  I immediately said yes to the table, but didn't really confirm that with Steve -- oops :-).

Boy was he surprised when that beast showed up.  It's built of solid oak and is very sturdy (which really translates into heavy!).  My brother-in-law and Steve had to carry it up to our second level which secured its place in our home.  There was no way it was ever going to come back down in 1 usable piece (unless a professional mover is doing it!).  That piece of furniture quickly became a "source of contention" between us - haha.  It wasn't necessarily a sentimental thing, but more for the fact that we got a very usable and sturdy piece of furniture for free.  Steve on the other hand didn't like its finish (even though it matched the wood floor) and just saw it as a bulky eye sore.

Once we started pulling the nursery together, we decided to go with white furniture to not over-shadow the wood floor.  However, it was too late to try to re-do the changing table since I had other things going on like wallpaper removal, painting, oh yeah, and being pregnant!  I had accepted that the changing table would remain as it was and we'd just make it work in the room.  Steve was still hoping he could take a sledgehammer to it and make it go away.

I never even thought about a chemical stripper to take the finish off (since there was no way I was going to sand off the finish in that room.  I remember the previous sanding catastrophe that happened in the nursery and didn't want another.  After getting advice about using a chemical stripper from others and my sister's willingness to get the job done, there was no turning back on the project!

We bought our supplies for the project -- chemical stripper, mineral spirits, tarp, sand paper, & masks--headed back home, and Amber quickly went to work.  You were supposed to paint a layer of the chemical on, let it sit 30 minutes, then scrape off the finish.  In theory, Amber was going to come play dolls with me and the girls (since I wasn't allowed to mess with the chemical, I was on niece duty) while the chemical set; however, she soon realized that you didn't really need to wait the full 30 minutes.  So she just set to work on painting and scraping continuously.  I wish we had kept better track of how many hours it took her to get the job done, but by the next evening, all the pieces were in their raw state!

After stripping the finish, she had to wipe it all down with the mineral spirits, then do a light sanding to get stubborn varnish spots off, and then washed it with soap and water.  When she left, all I had to do was paint it white & put a clear coat on it -- easy enough!  It took me a couple days of painting it all white, and then another couple days for the clear coat.  Steve helped out with the clear coat as well so that I wasn't over-exposed to chemicals -- thanks Steve!

To finish it all up, I used Valspar Ultra paint & primer in 1.  It has No VOC (volatile organic compounds) and no odor!  I was skeptical of the no odor part, but seriously there is none!  If you have color added, there's a little bit of smell, but since I used it as straight white, no fumes!.  After applying 3-4 coats and achieving the look I wanted, we used MinWax ploycrylic semi-gloss to seal it all in.  The polycrylic needed about 3 coats, but you were able to apply coats 2 hours apart - not too bad!

Now we have a piece that matches the nursery beautifully and no longer is a "source of contention".  Okay, maybe it is still a little bulky and Steve isn't as in love with it as I am, but we both agree it goes very well in Bean's room now.  I'll take that compromise!  Only problem for Steve is now there's no way we're getting rid of it after all of Amber's hard work :-). Thanks sister!  We love it :) 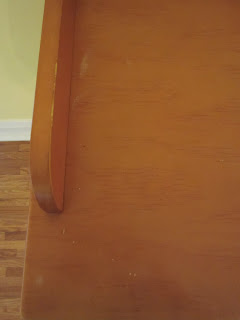 (I really had never thought about seriously repainting it, because I felt that taking the varnish off would "ruin" such a "nice" piece of furniture.  But upon closer inspection, I realized this table had been well used and had lots of marks and stains on it.  After discussing with sister about her feelings on the piece, it was a no-brainer to re-paint it the way we wanted -- especially with the help!) 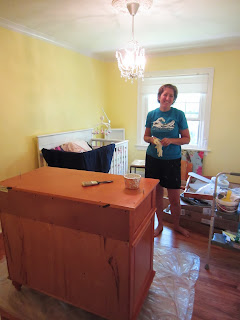 (She was smiling at this point because she still thought it'd be a quick process.  It went quicker than I thought it would, but it required lots of attention and time from her that I don't think she had thought about - haha!) 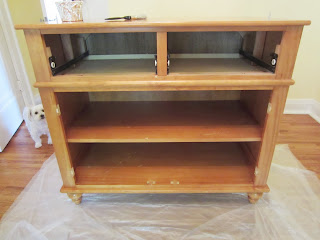 (All the varnish stripped off!  I deemed the inside not important to worry about.  I ended up buying shelf liner and put it on the inside to cover up the stains on the shelves -- easy peasy!) 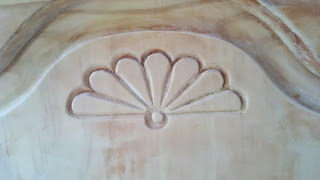 (The doors had this flower detail on them which made them "country-ish" in Steve's words.  I could take or leave the design, but since we were doing an over-haul, now was the time to address the issue.) 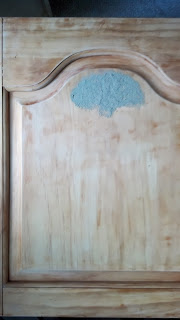 (I got a wood filler and covered up the design.  After it dried, I sanded it to make it smooth.  I probably should have done this a couple times to assure the design was completely covered, but I was ready to move onto painting.  When you look closely at the doors now, you can see the outline of the design, but from a distance it isn't noticeable so I'm happy.) 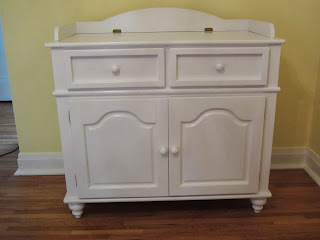 (Our "brand new" changing table!  I feel like it looks like a completely different piece of furniture now!  It matches the crib beautifully!  Notice how you can no longer see the design on the doors.  We will probably change out the knobs, too; just haven't gotten to that yet.) 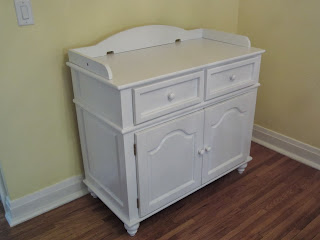 (Another view!  Originally, we put the changing table in this corner so that it was hidden and not a focal point in the room, but after discussing it, we've changed the layout.  Now it sits across from the crib, and we'll put the rocking chair in the corner.  This was Steve's suggestion so that we can look out the window while rocking Bean. We're waiting on our glider to arrive to finalize the layout, then we'll post pictures of the finished nursery -- can't wait!)

Better look at how painting the changing table white really changes the room: 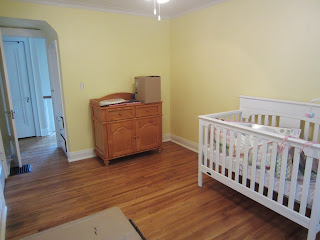 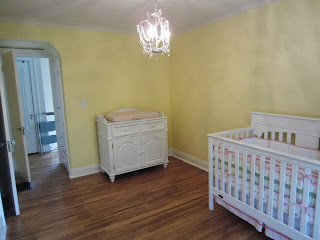 Amazing how just changing its color really updated the piece and changes the whole room.  Love it!
Posted by Unknown at 10:06 AM