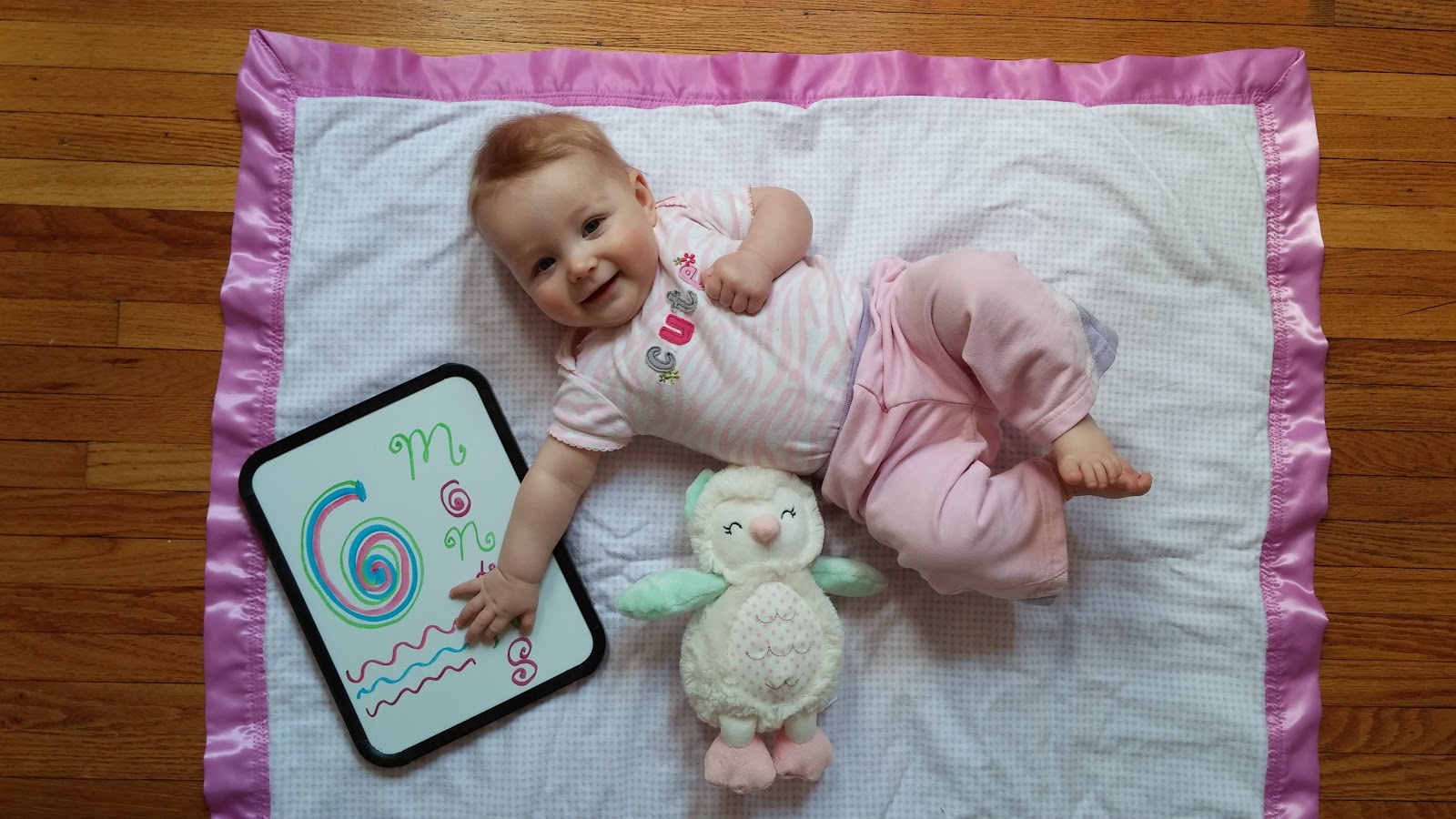 How is it possible that Bean is already a half year old?!  This means I'm already beginning to think about her 1yr birthday party.  Seriously?!?!

Yet again, it seems like Bean has grown up so much in the past month.  She has become quite the ham and is constantly in action.  She still loves playing in her jumper and on her activity mat.  Only now when she's on the mat, she rolls all over it and reaches for the many toys that are strewn all about.  She is getting so close to crawling, but doesn't have much motivation.  She has mastered the art of mobility via rolling. She can roll back and forth, flipping from back to tummy and turning while she does it.  She's very good at reaching out and grasping for things.   A couple of her favorite things to grab for -- hair and sweatshirt strings.  I now keep my hair always pulled back and am threatening a new mom cut (Steve's not ready for that - ha!).

Bean is becoming very vocal.  Her favorite sound so far is "ne- ne- ne" followed with a "da-da-da-da".  She also squeaks and squeals which sometimes sounds like a "hey".  Even though she is babbling, she has no clue of what she's doing.  The babbling is not an everyday thing, yet.  But one thing is for sure, this girl loves to laugh! We are constantly hearing her crack up over silly things.  She loves being "tickled", being "scared" with a "boo!", and is quite the dare devil.  She loves being tossed in the air (not too high!!) and bounced around on the bed.  Sometimes, she'll laugh so hard she'll cry.  This usually only happens when she is really tired, though.

Another big change this month -- food!  Little girl has started eating "real" food!  I feel like there's so many rules about introducing food that I get really stressed and obsessive about it.  So far, I'm starting things "by the book", but as I see her getting accustomed to food, I'll probably be more lacks.  For now, we are only introducing one food at a time and waiting 3 days in between each new food to see if she has any reactions.  She has mastered green beans and is currently working on avocado.  I started with baby food green beans, but have also given her real green beans, just sort of cut up/mashed.  She did well with them, but definitely likes the baby food better.  The avocado has been a different story.  I just scoop it out, sort of mash it up and give it to her.  She liked the first couple bites, but then progressed into spitting it out, to full out refusing it.  We'll try it again today (and maybe give her some green beans along with it) and see how it goes.  She is currently eating solids for a lunch and dinner meal, and then I give her some breastmilk after she eats either by a bottle or nursing.

For food, we are slowly working through the vegetables first, starting with the greens and working toward orange.  Then we'll start with fruits.  When we add in the fruits, I'll add those in with a cereal in the morning and drop that nursing.  I'm really looking forward to being done breastfeeding.  It's starting to become uncomfortable both physically and mentally/emotionally.  She is on the brink of getting teeth and is currently in a bad habit of chomping.  The minute she does it with teeth, I'm done! The more food she starts eating, the more I'm ready for her to be done, but then that means my little baby is growing up, which brings on more emotions, ha!

Bean is still getting up in the middle of the night, which is driving me crazy.  Like literally.  I'm so ready for a full night's sleep on a consistent basis.  She was doing really well with sleeping through the night, with random nights of her getting up once.  But then, that changed to her getting up consistently 1 time at night (usually around 6).  Then she had shots last week, and she decided getting up 2x/night was the new norm.  This week, Steve has been working the night shift and for some reason, it makes it harder for me to get up in the middle of the night.  So when she starts crying around 3:30am, I struggle to get up and just sleep through it.  She eventually goes back to sleep and wakes up again around 6:30 (I get up and feed her then).  I'm hoping that after a few nights of her crying and going back to sleep, that she'll just learn to sleep through the night.  I think she's just in a habit of getting up and eating, but really doesn't need to be eating.  Since I know she can go 12 hours at night without food, I'm going to stop feeding her before 6am (that's like 9-10 hours).

At Bean's 6 month check, she weighed in at 15.4 pounds and is 26.5" long.  She currently is in the 75th-90th percentile for length and 50th percentile for weight.  Which means she is still long and lean.  She currently wears size 6 months - 9 months, depending on the style.  For one piece sleepers with footies built in, she needs 9 months, but for 2 piece clothing or onesies, she can do 6 months (or 6/9 months).  Clothes are typically loose around her body, but tight on her lengthwise.  Her feet are still pretty tiny, but are definitely growing.  She can no longer wear the little cloth tennis shoes she used to wear.  Shoes are really hard to size/buy for a baby, so she's currently shoe-less, meaning she is currently sock-less (since I used the shoes to keep her socks on).

Other random accomplishments:
-She can pick up her paci and put it into her mouth on her own
-She loves to slap things with her right hand and can "slap" your hand with hers
-She loves going on walks in her stroller, especially with cupcake Sara!
-She can now sit in her booster seat (she still sort of slouches)
-She tries to blow raspberries, but ends up just spitting
-I had to raise up the straps in her carseat and is becoming too heavy to car her in it
-She can finally "put herself to sleep" by placing her in the crib with paci/blanket and turning on her bird mobile.  She's usually asleep halfway through its song.  We've also started using a sound machine to block out noises if I know we're going to be loud in the house (like vacuuming, or when I was painting in the bathroom).


The last month in pictures: 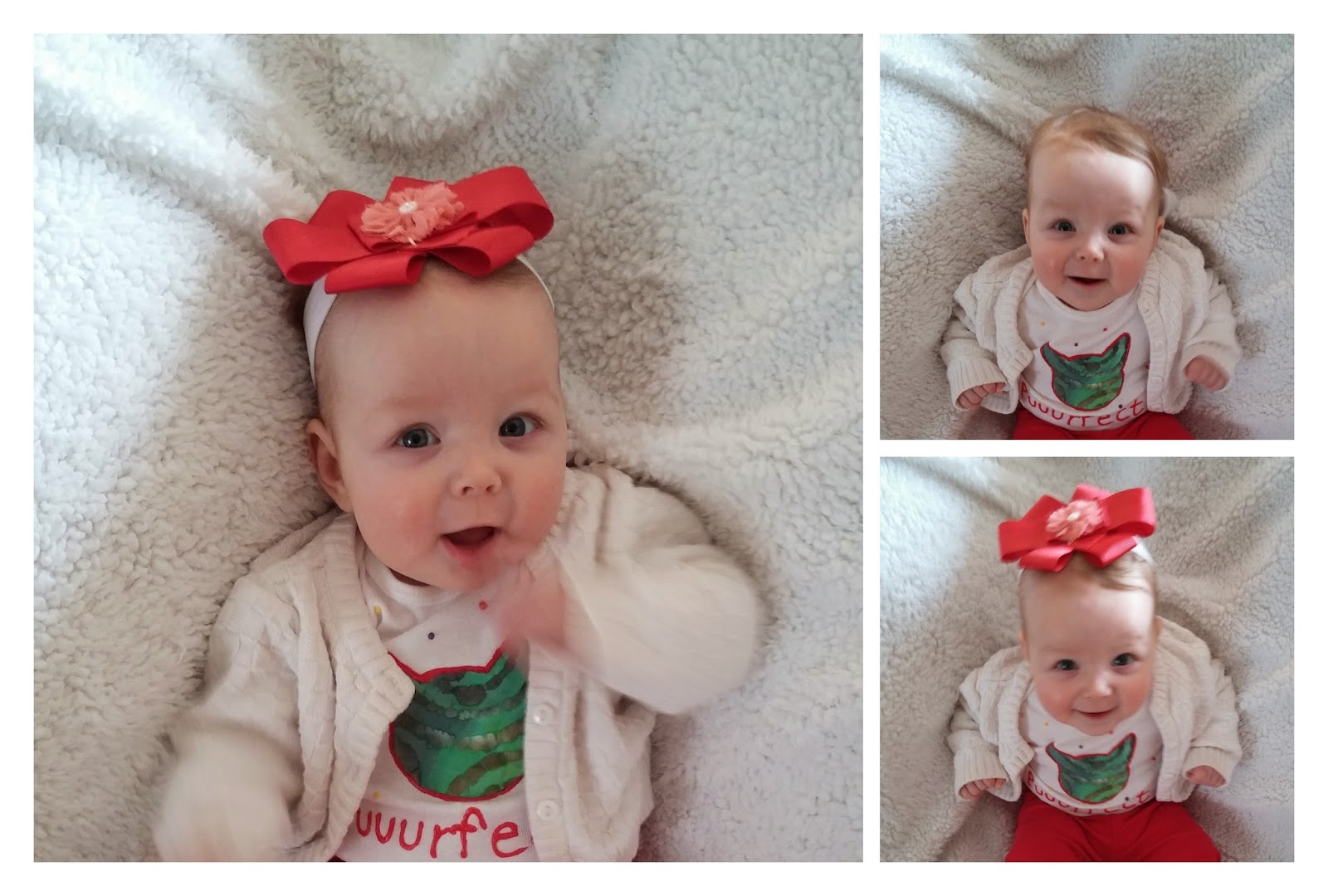 (Get this silly bow off me mom!) 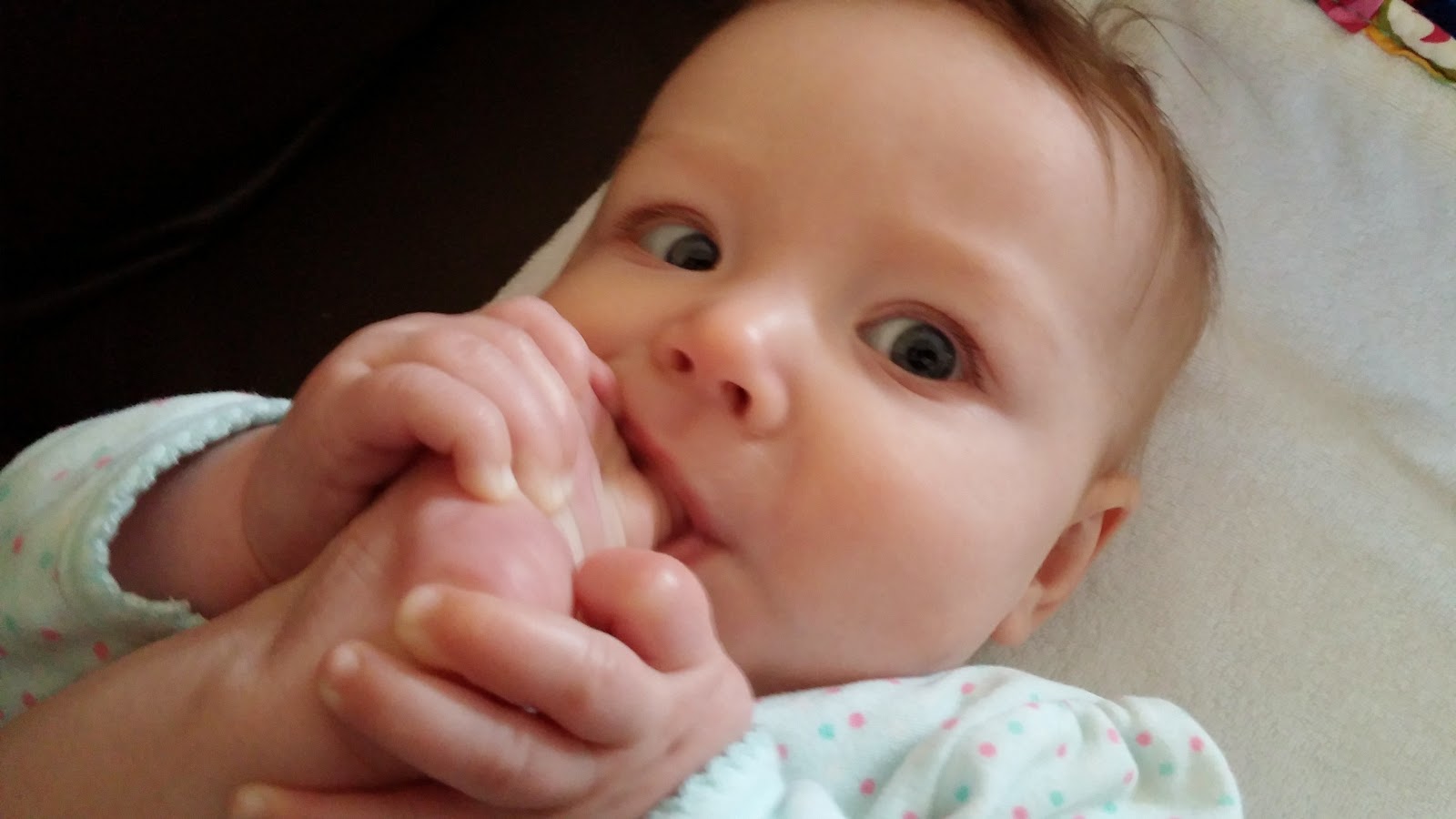 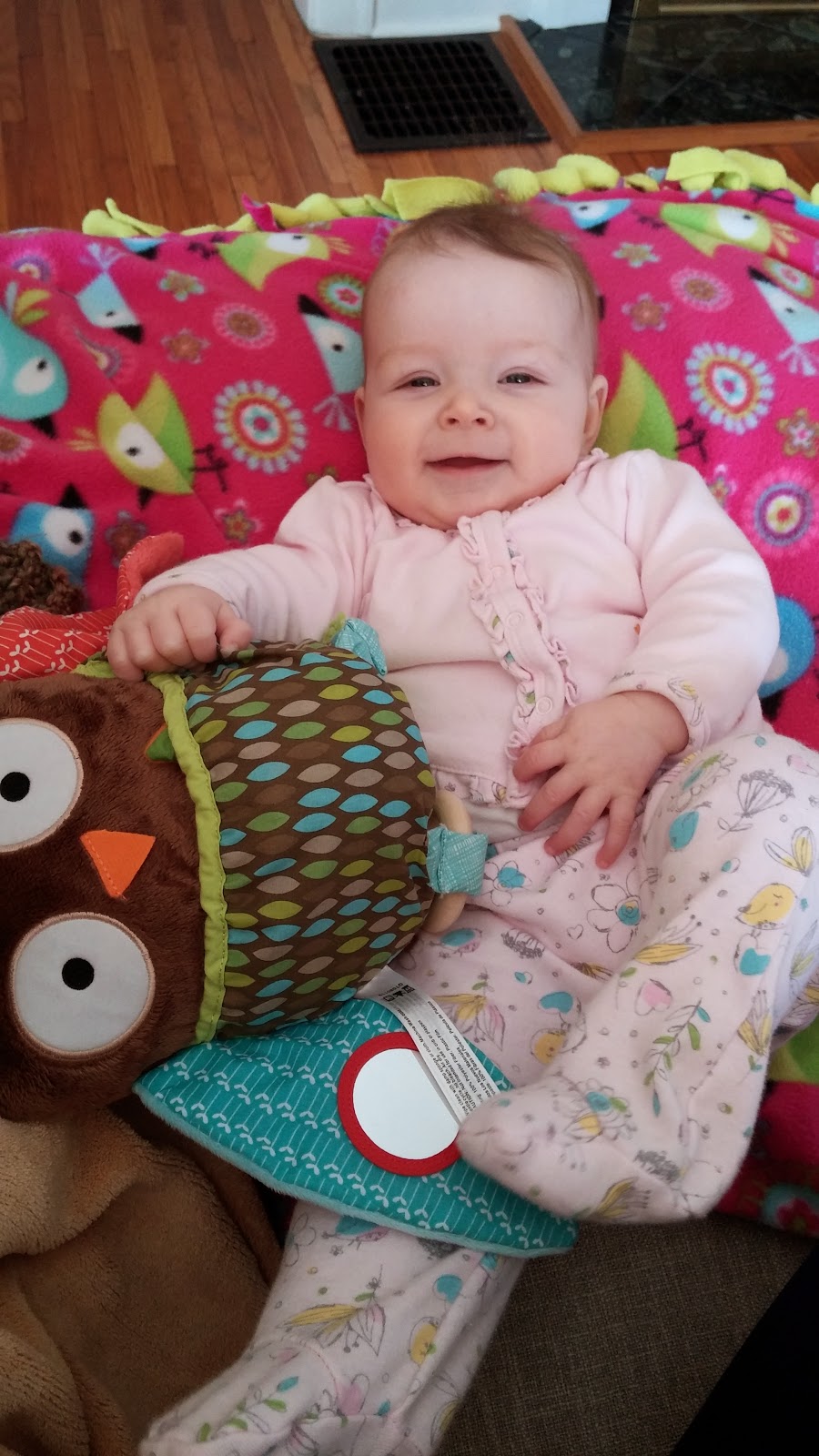 (Bean now "plays" with toys! She loves this owl.  It makes all sorts of noises and has her other favorite thing -- tags! She loves sucking on the manufacturing tags.) 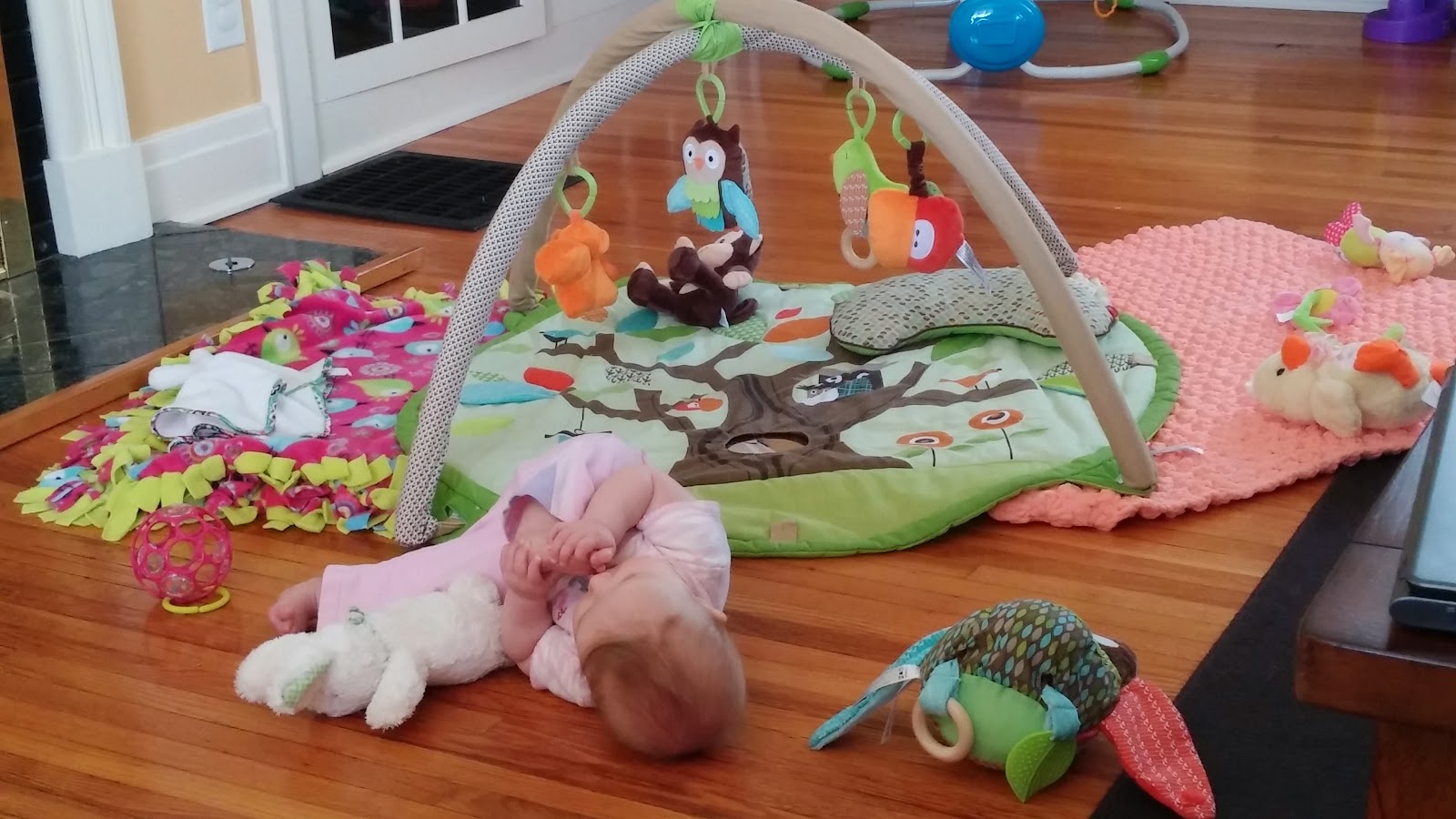 (Look at that play area and all those toys -- and what does she choose to play with?! Her own foot on the hard wood floor.) 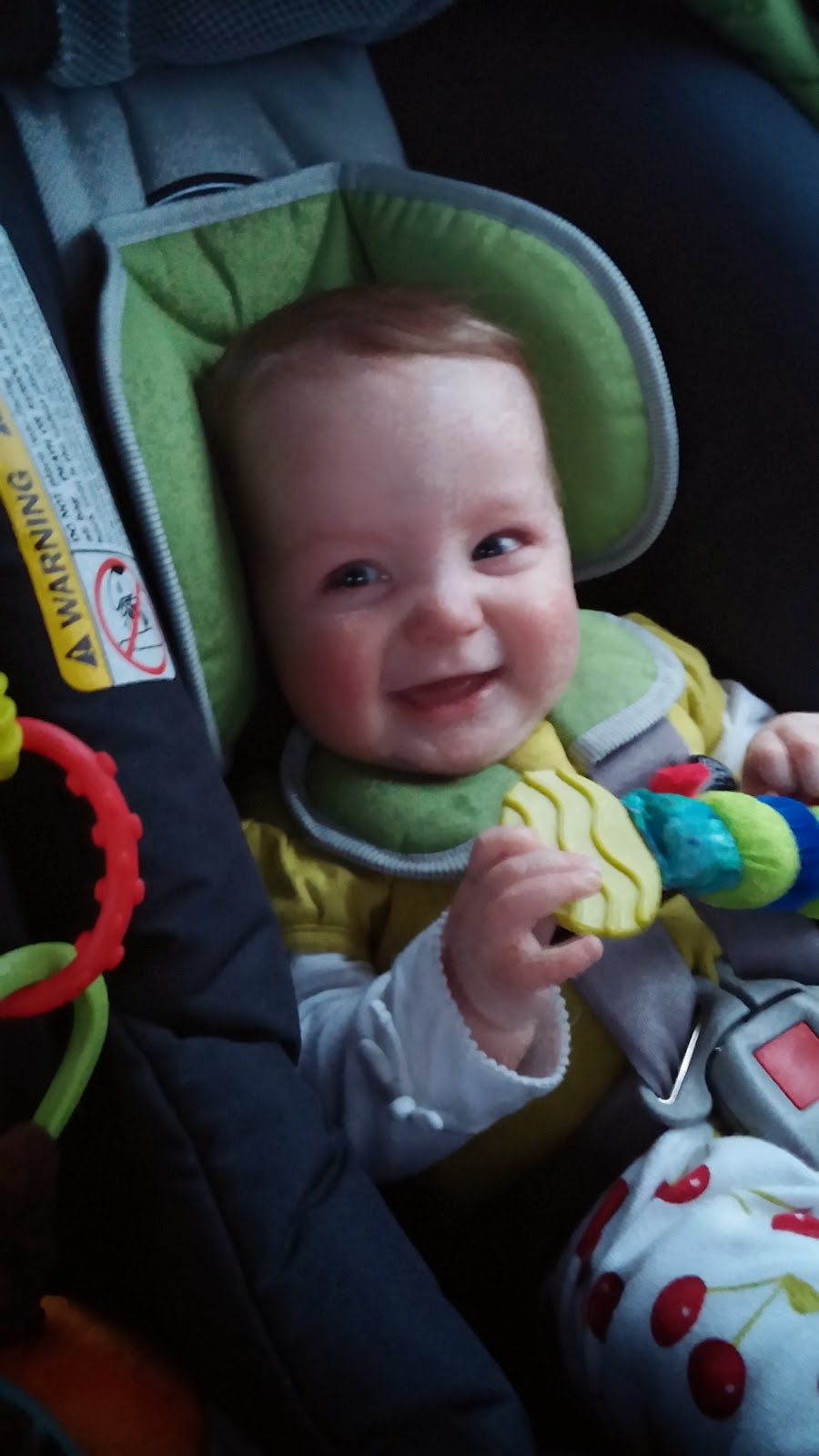 (It's hard to tell, but she is cry/laughing.  We were headed home from small group and she was all wound up, thanks to Candace & Emi, yet very tired.  I chose to sit in the back with her on the way home to make sure she stayed awake.  She was laughing at me singing to her, but she was hysterical laughing which brought on tears. In the words of daddy - "Women!") 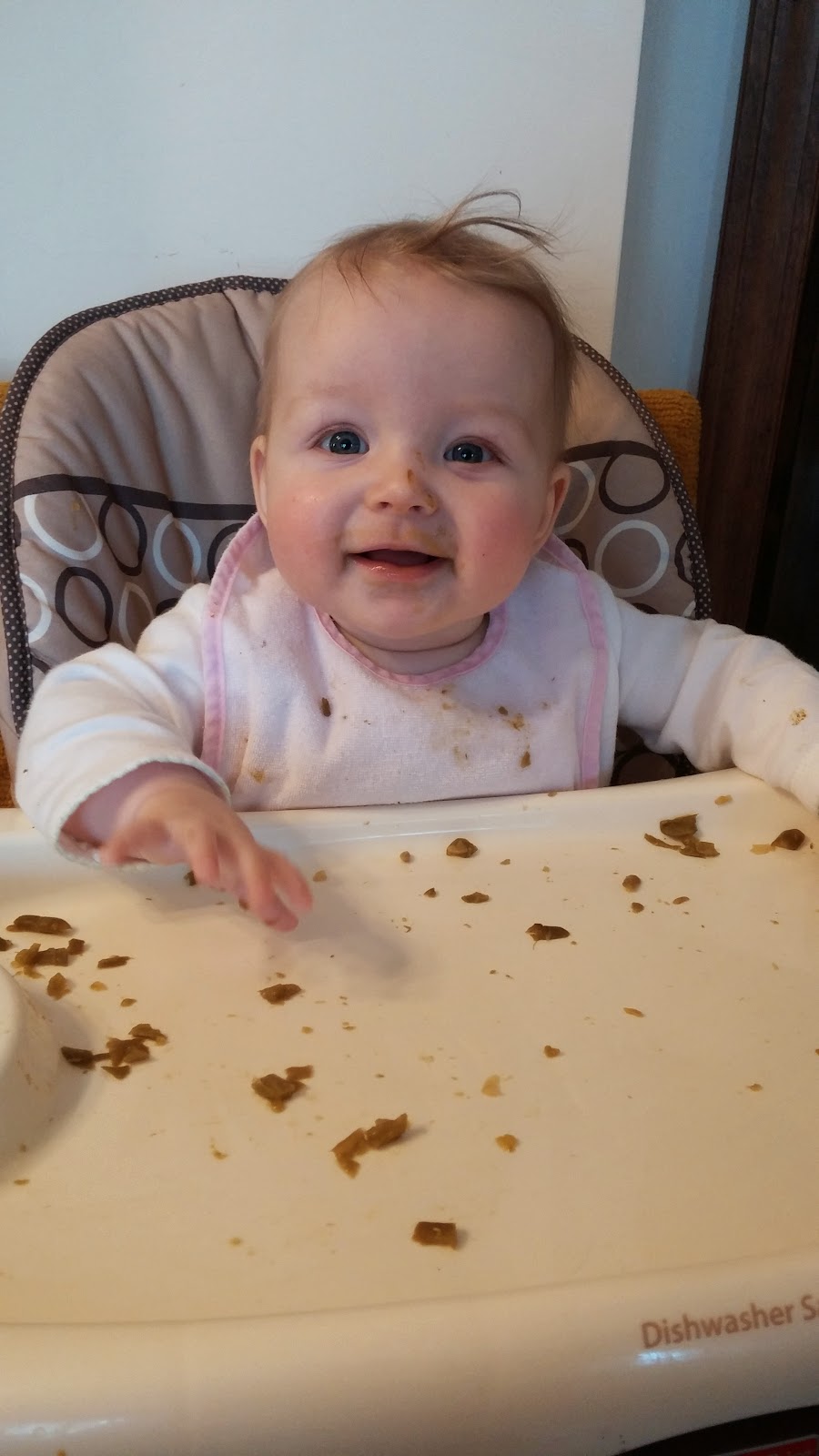 (Yummy green beans!  I let her try to feed herself, but she wasn't very successful.  I let her play with some while I just spoon feed her,  This was taking at Easter at my parents' house.  She looks like a monster in her own booster seat, haha.) 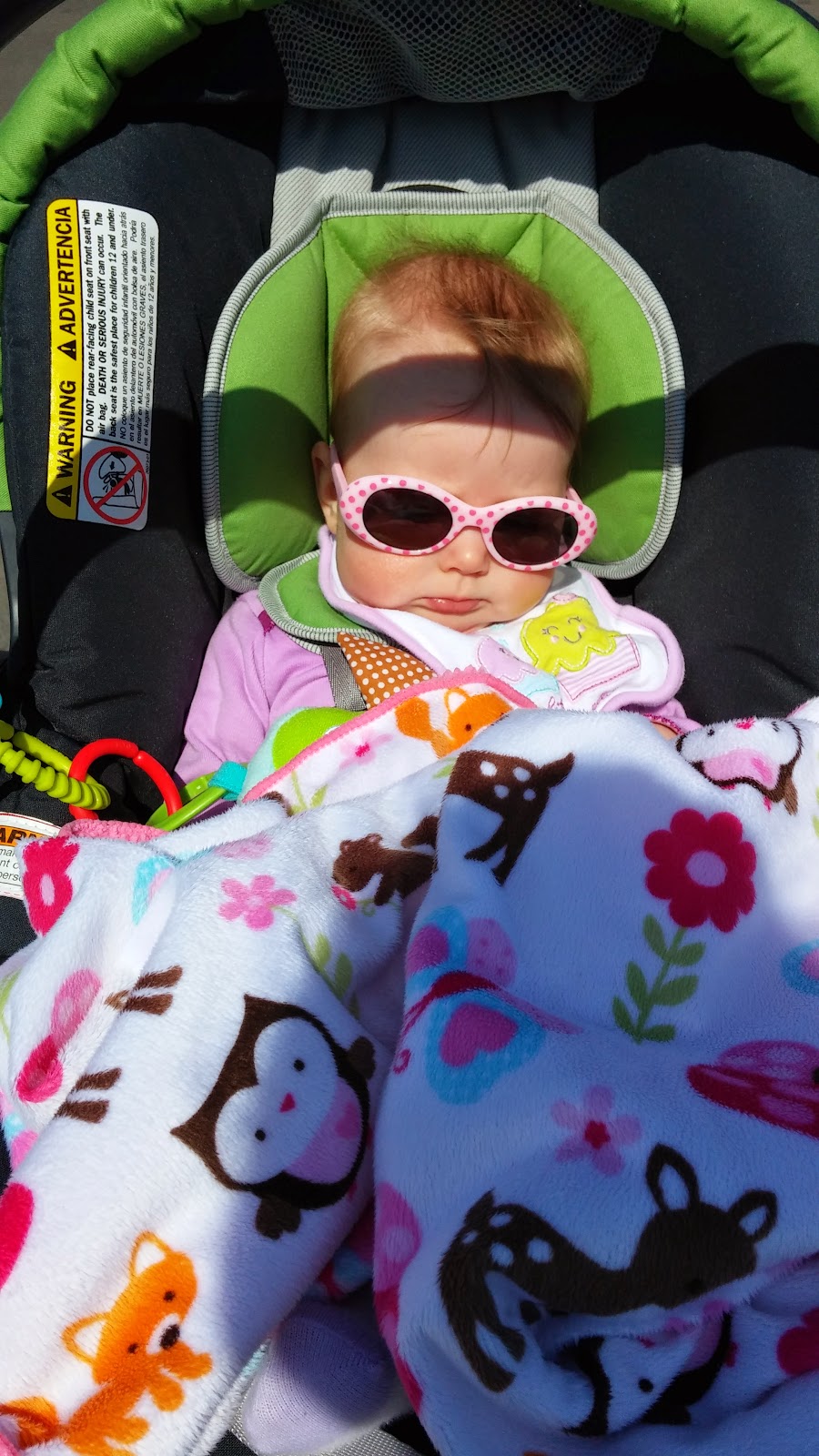 (Cuteness overload!  Bean hates the sun - and wind - on her face.  I remembered she had her own sunglasses and pulled them out.  She wore them for a little bit, before tearing them off.  She has another pair that actually Velcros like a headband.  We'll try those on our next walk.) 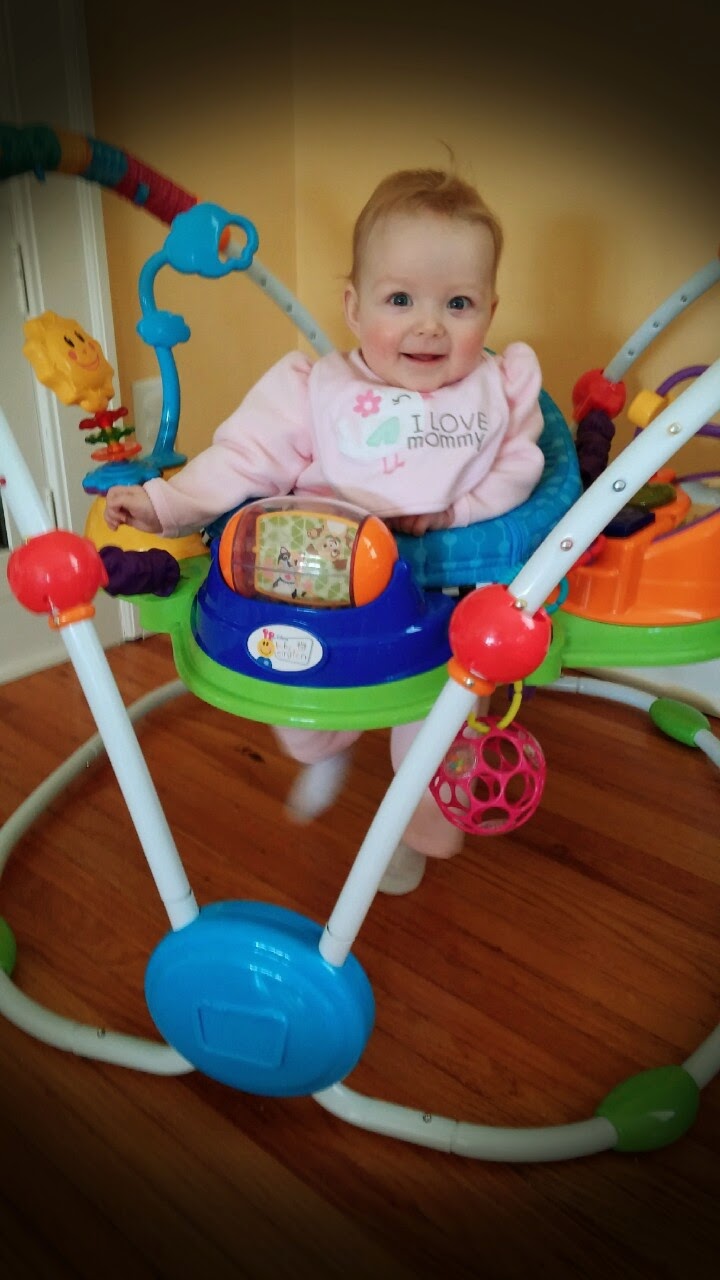 (What a big girl!  Pillows are no longer needed - Bean can touch the floor on her own.  She can play with all the different toys on her jumper.  She can't fully swivel on her own, but can reach from side to side.)

Baby Girl, you are growing way too fast!
Posted by Unknown at 11:18 AM