I decided I was ready to return back to my old ways and tackle a new project.  I mean, how hard can it be with a 6 month old, right?  I decided what worst case scenario would be - me and bean both crying in the bathroom with paint all over us and nothing accomplished -- and anything other than this scenario would be great. Haha.

I decided to start small and tackle the master bathroom.  Luckily, it has been updated and in pretty good condition.  Only problem was the paint color.  it was sort of a baby poop brown color.  I can say that, because I currently deal in a lot of that color, thanks to Bean.

I started a little prep work on Thursday, like making sure I had all the right supplies, and taped around the cabinet.  But Friday was my official start day.  I put Bean down for her first nap and got to work.  I quickly wiped the walls and got straight into painting.  She didn't take as long of a nap as I had hoped, so I set up a play area with blankets for Bean to play on in our bedroom while I worked.  I took a break when it was time for both of us to eat and got back to work when it was time for nap #2. At the end of the day, I had the first layer of paint around all the room (except behind the mirror) and the 2nd layer on half.

I thought I could plow through the bathroom on Saturday since Steve would be around to help with Bean.  However, I didn't think about the fact that he would have his own to-do list (which consisted of taking advantage of the beautiful weather and working in the yard).  So Saturday looked like the same as Friday, I worked while Bean napped. Then when she'd wake up, she'd play on the floor in our bedroom.  I was able to finish painting all the walls by the end of the day.

I had big plans to start and finish the trim on Sunday, thus completing the bathroom.  But again, I didn't think through the fact that it was Sunday and we'd only be home for a few hours in the afternoon.  So instead of starting on the trim at all, I ended up getting side tracked and working on redoing the caulk around the outside of the shower.

Monday was another piddling day in the bathroom.  I got engrossed in the caulking project and decided to redo the messed up caulk inside the shower.  There were parts of it that were growing mold and becoming discolored.  I discovered that you can use mineral spirits to help loosen up the old caulk, and was able to get it out during Bean's first nap.  During her second nap, I was able to re-caulk the area.

Tuesday was a HUGE work day.  Bean cooperated amazingly and took 2-2hr long naps.  I was able to tape and paint all the trim, door, and window.  I was even able to clean the bathroom up and put it back together.  We only had to wait one more day to finally be able to use the shower in there again. Yay!

The project took a couple days longer than I anticipated, but I got so much done.  It always feels so good to finish a project, but I must say.  I'm not ready for another one!  May is going to be a crazy month for us, so maybe come summer I'll be ready for the next project -- the other bathroom (which will require wallpaper removal.  yikes!) 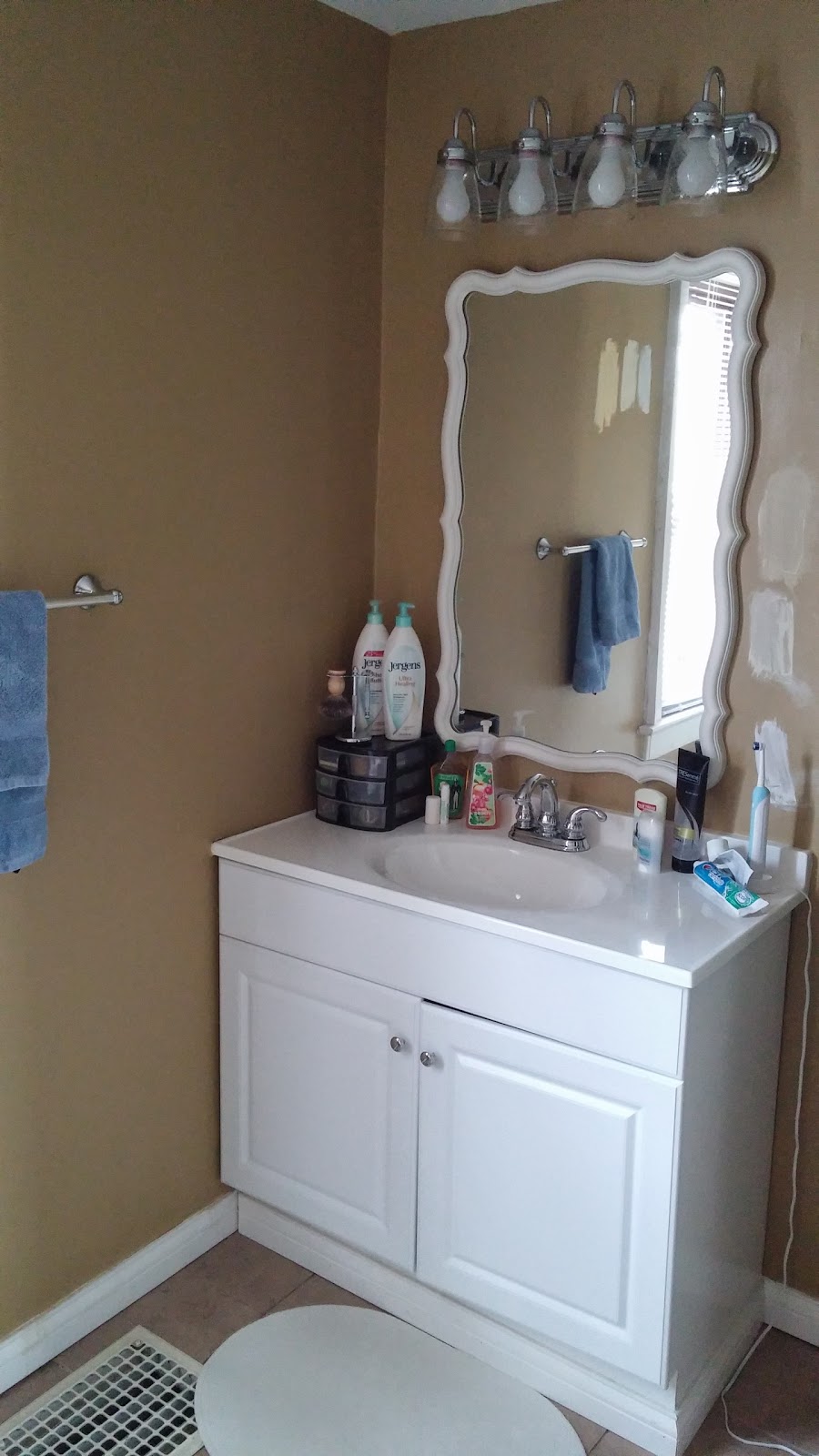 (The coloring is off in this picture.  The next picture shows the original color better.) 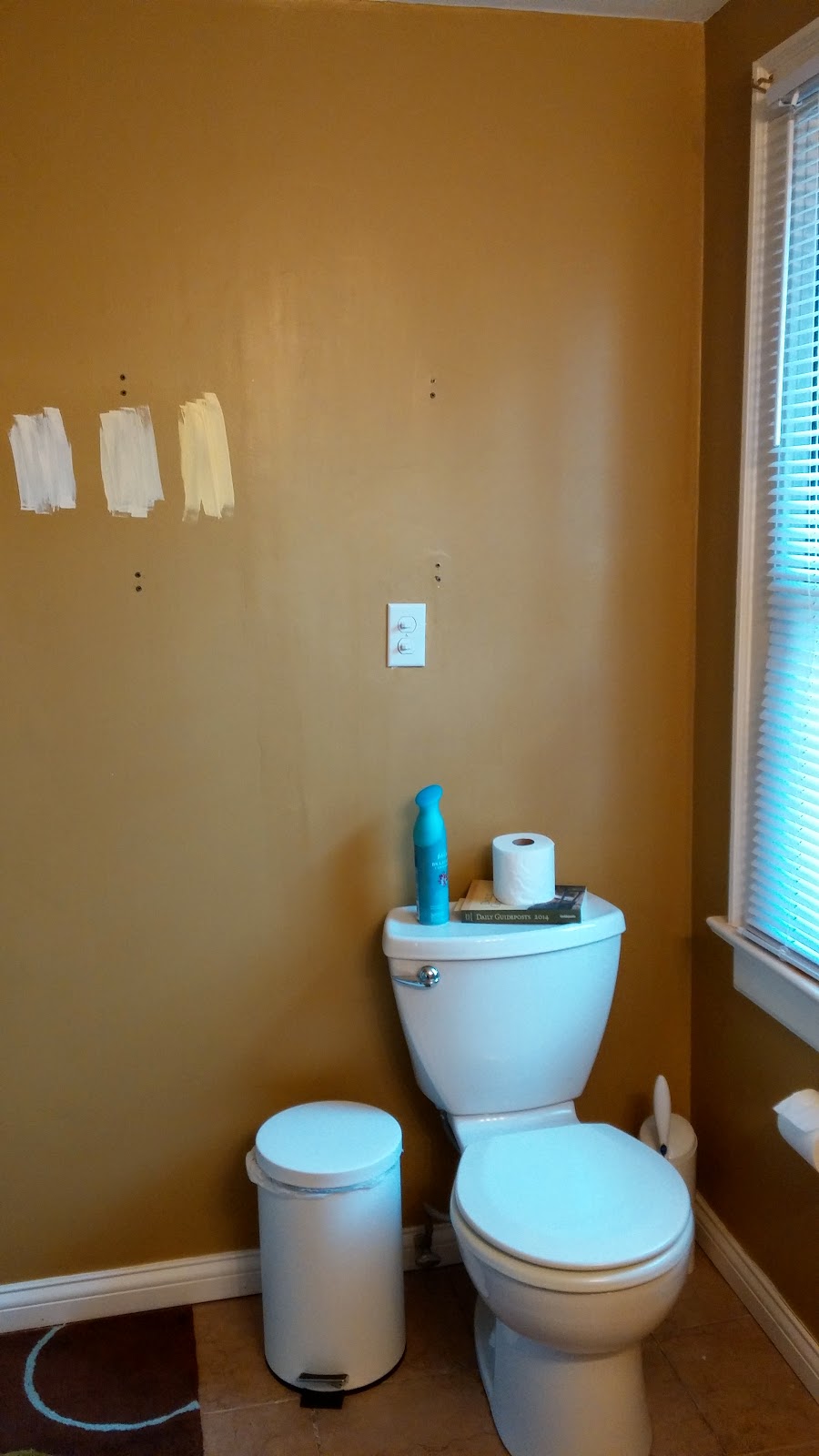 (We knew we wanted to change the bathroom to a yellow tone, and I happened to already have some sample paints from when we were doing Bean's room.  So we just picked a color from one of those samples.  It ended up being the middle option from this picture.) 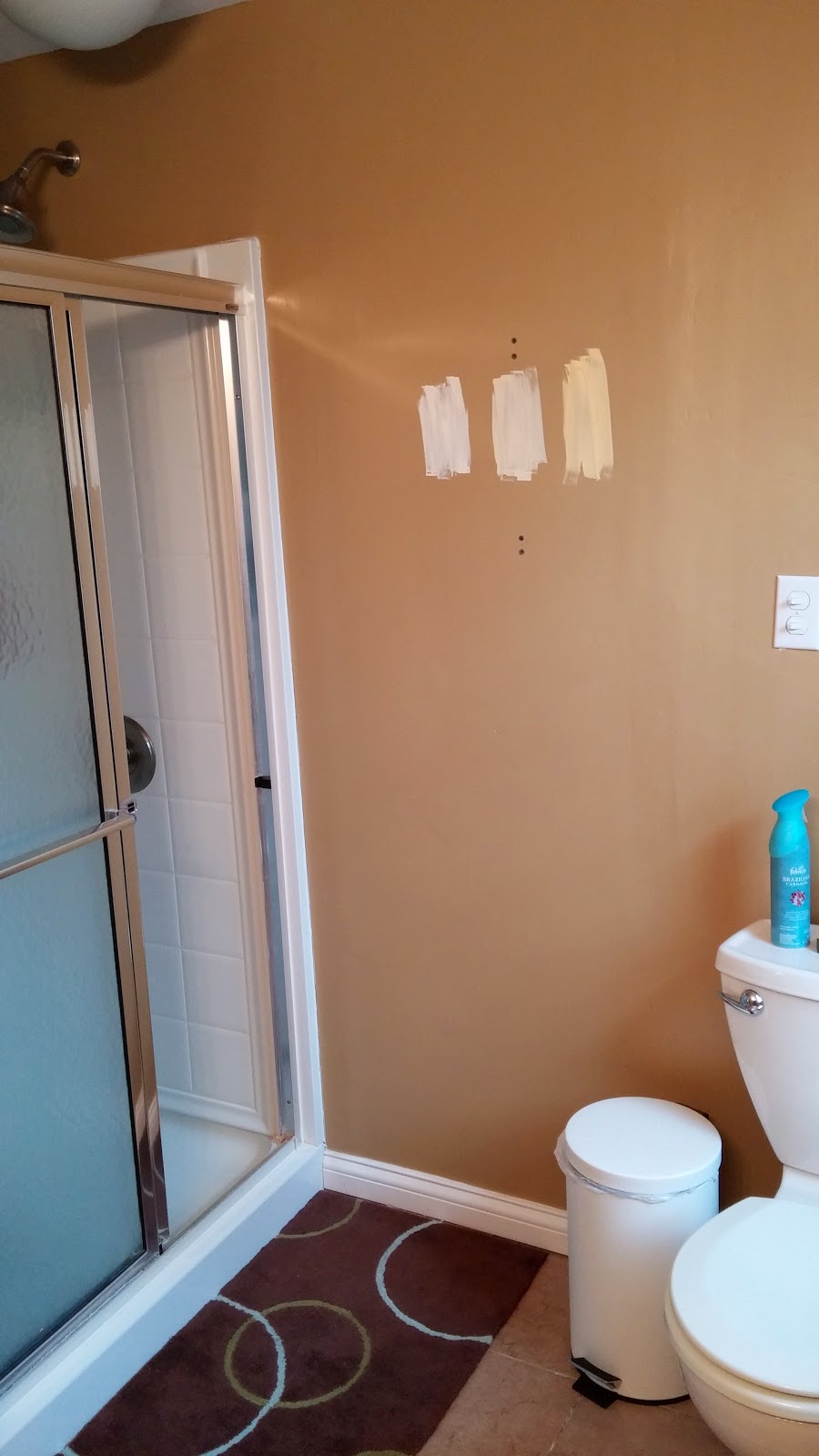 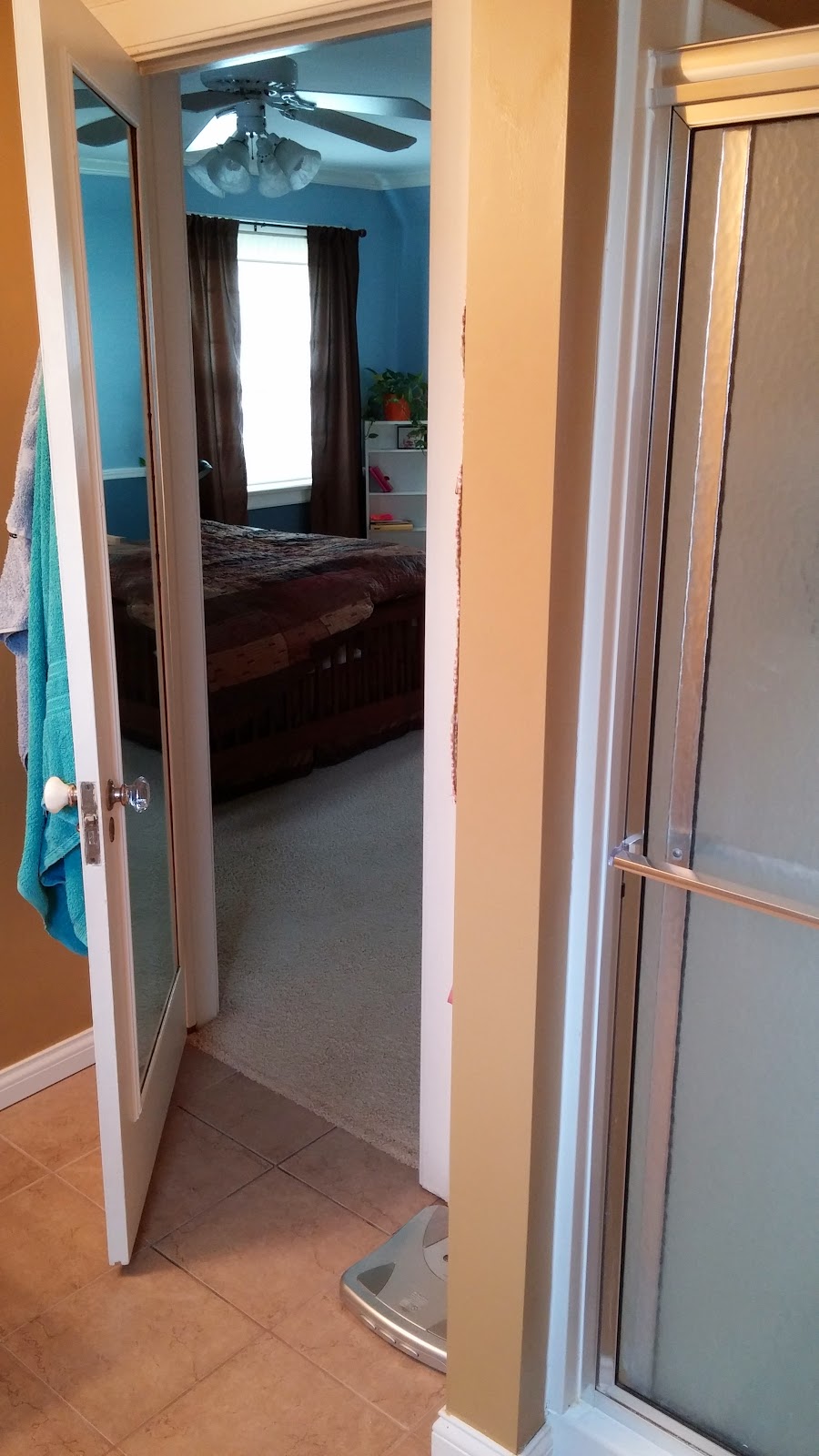 (View out of the bathroom into our bedroom.  Which I realized, I painted the bedroom around this time last year!) 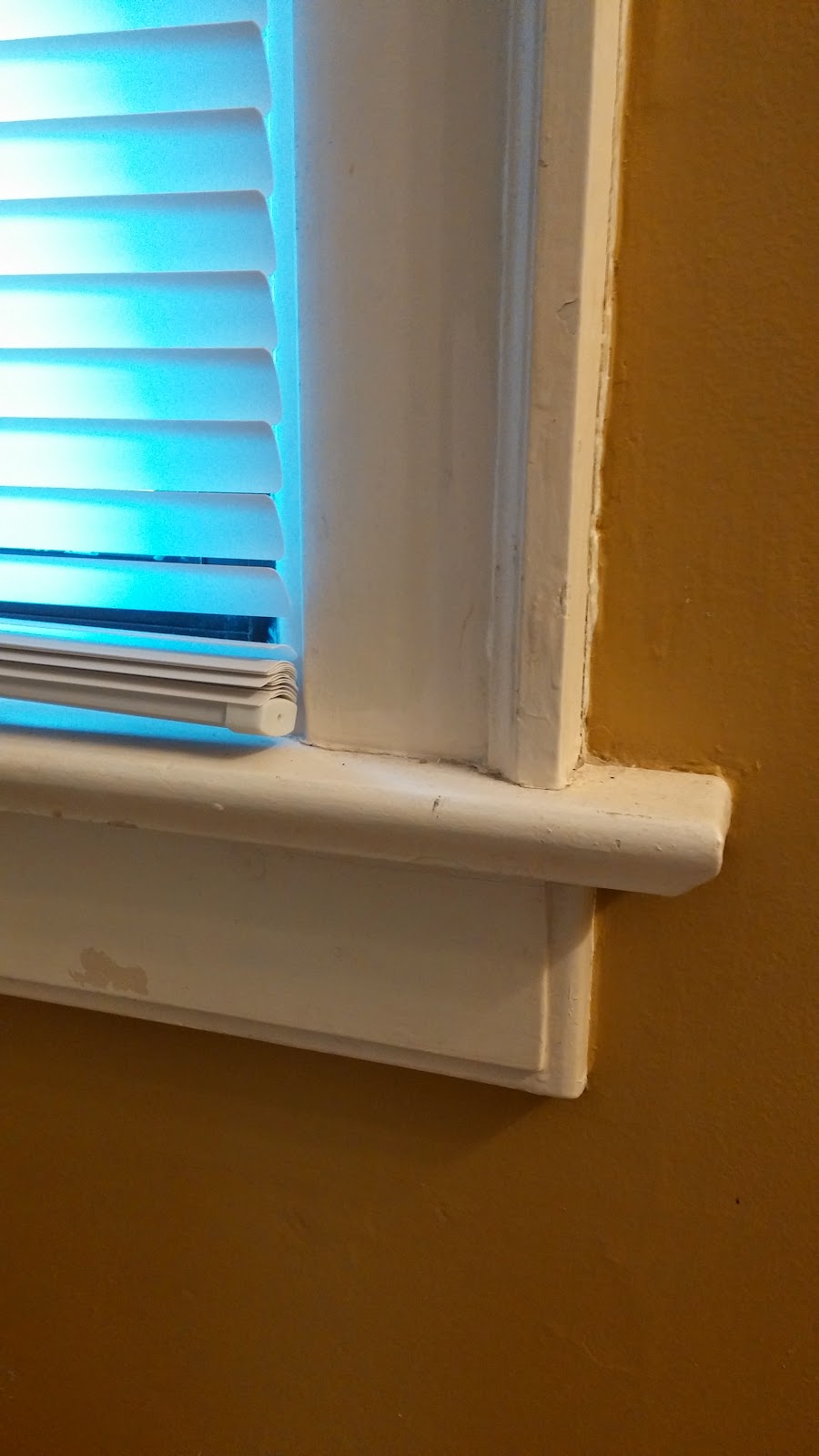 (And just like the rest of the house, the trim was in dire need of being redone.  There were multiple colors of white on the trim from people trying to retouch it. ) 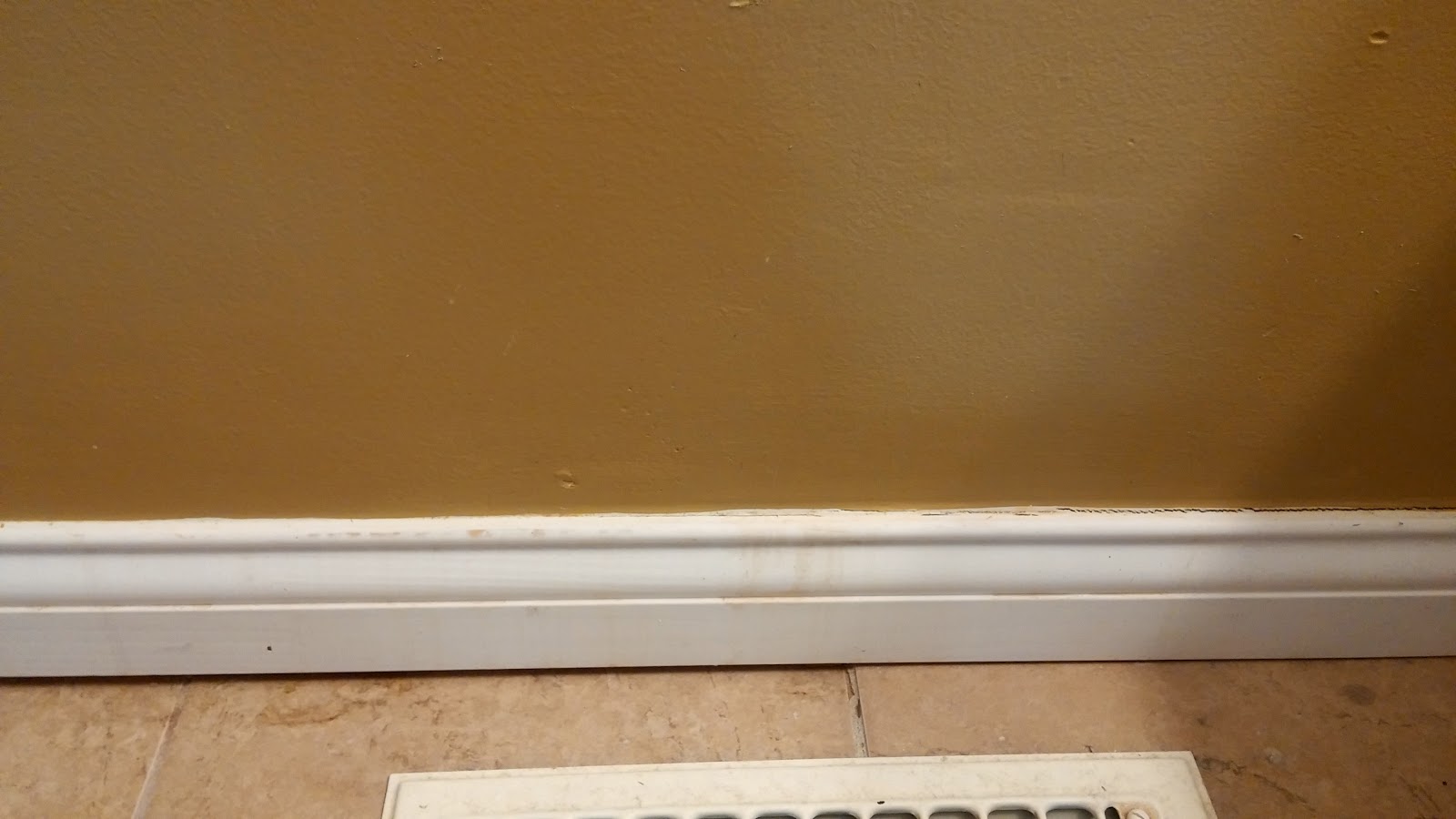 (It's hard to tell from this picture, but we have issues with condensation running down the walls after taking a shower.  The problem has been going on for so long, that it had washed some of the paint off the wall and was all over the floor trim.) 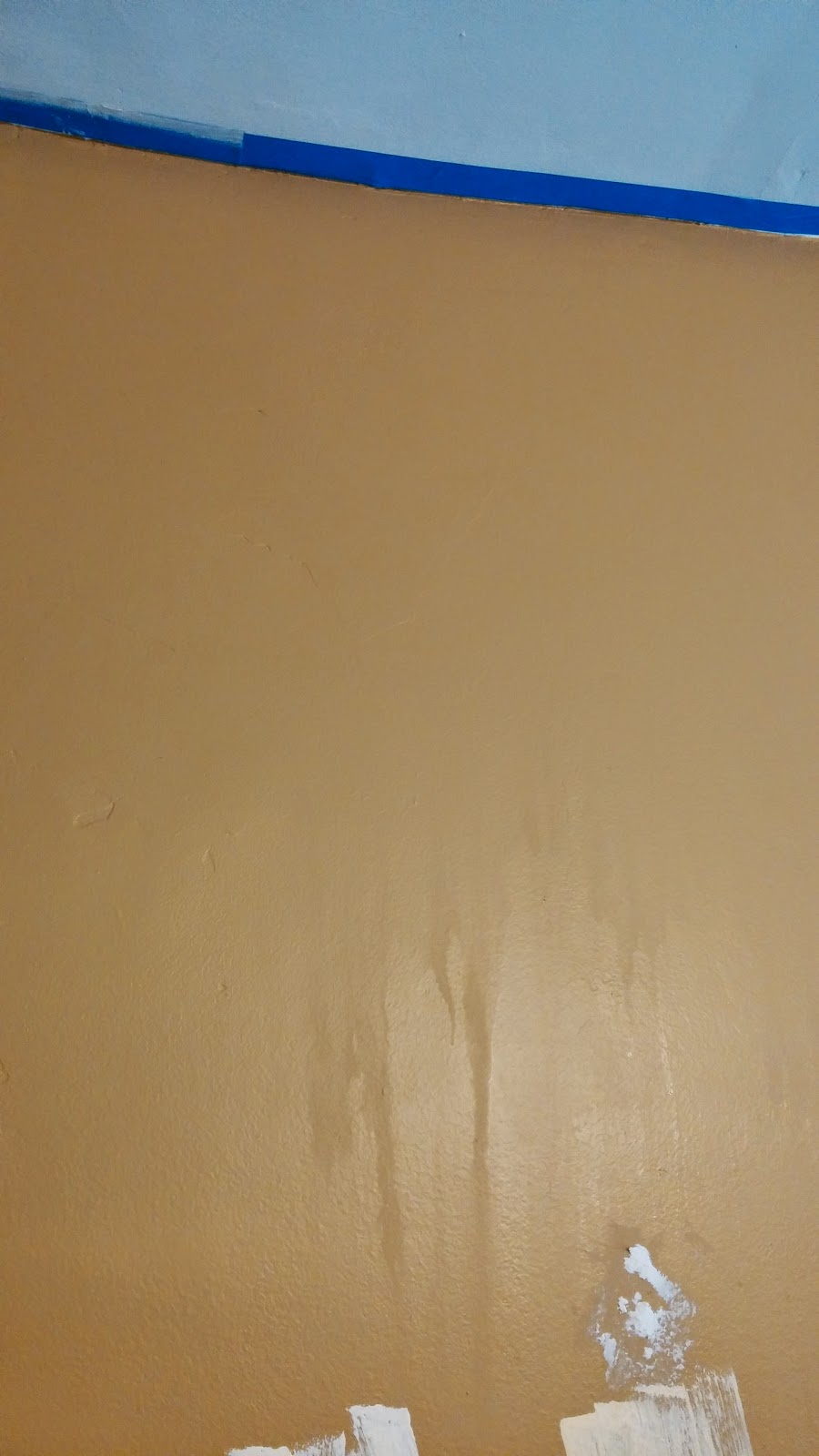 (Here you can see the streaks from the condensation running down the walls.  We were going to buy some special primer/paint, but we were advised that just using a semi-gloss paint and primer in one would fix the problem.  So I went with my favorite Valspar Ultra- no odor/VOC paint.  It seriously has no smell.  Steve couldn't even tell I was painting when he walked in the house.  I'm skeptical that we won't have an issue with it streaking from the water, though.  We shall see.) 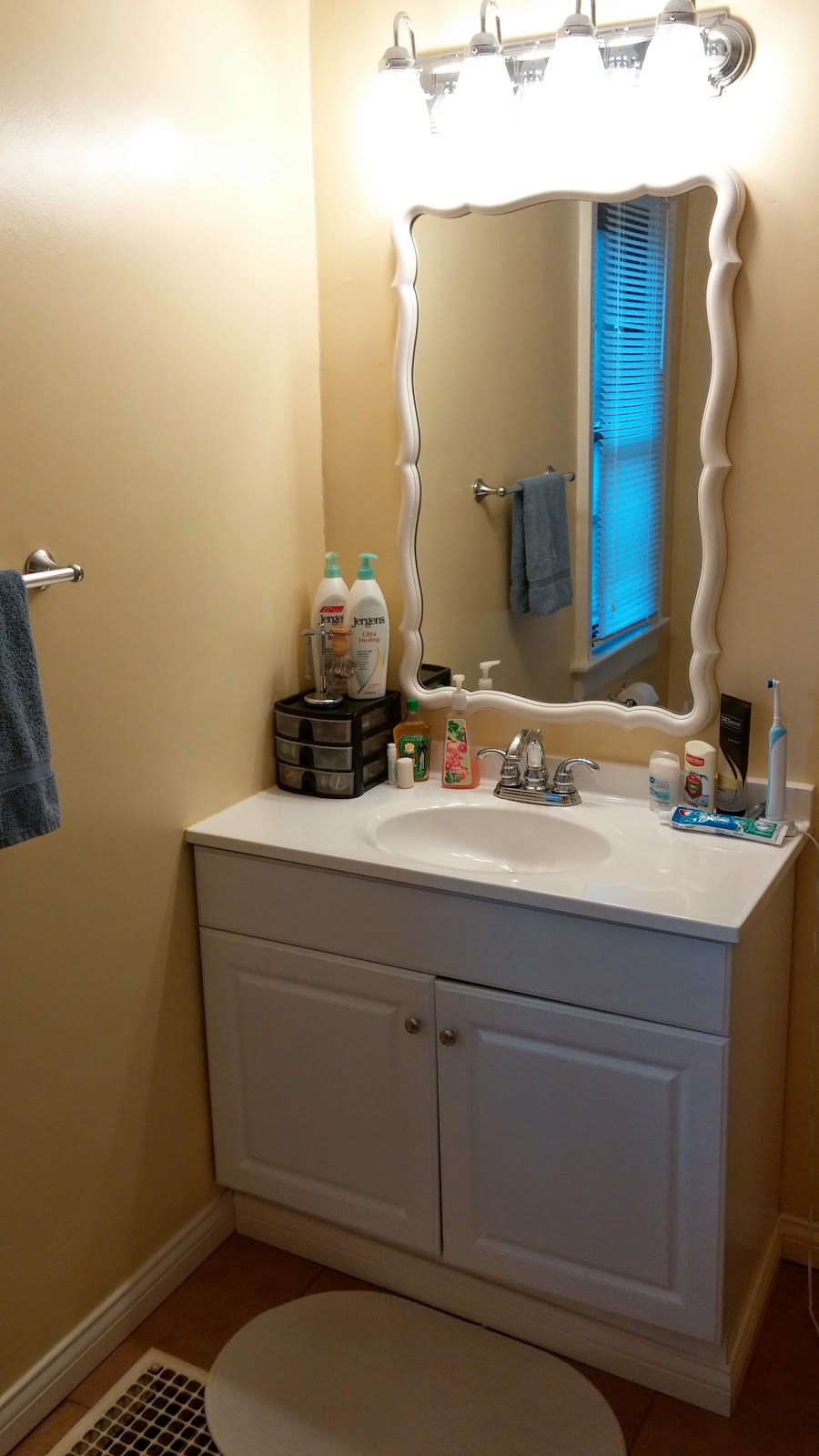 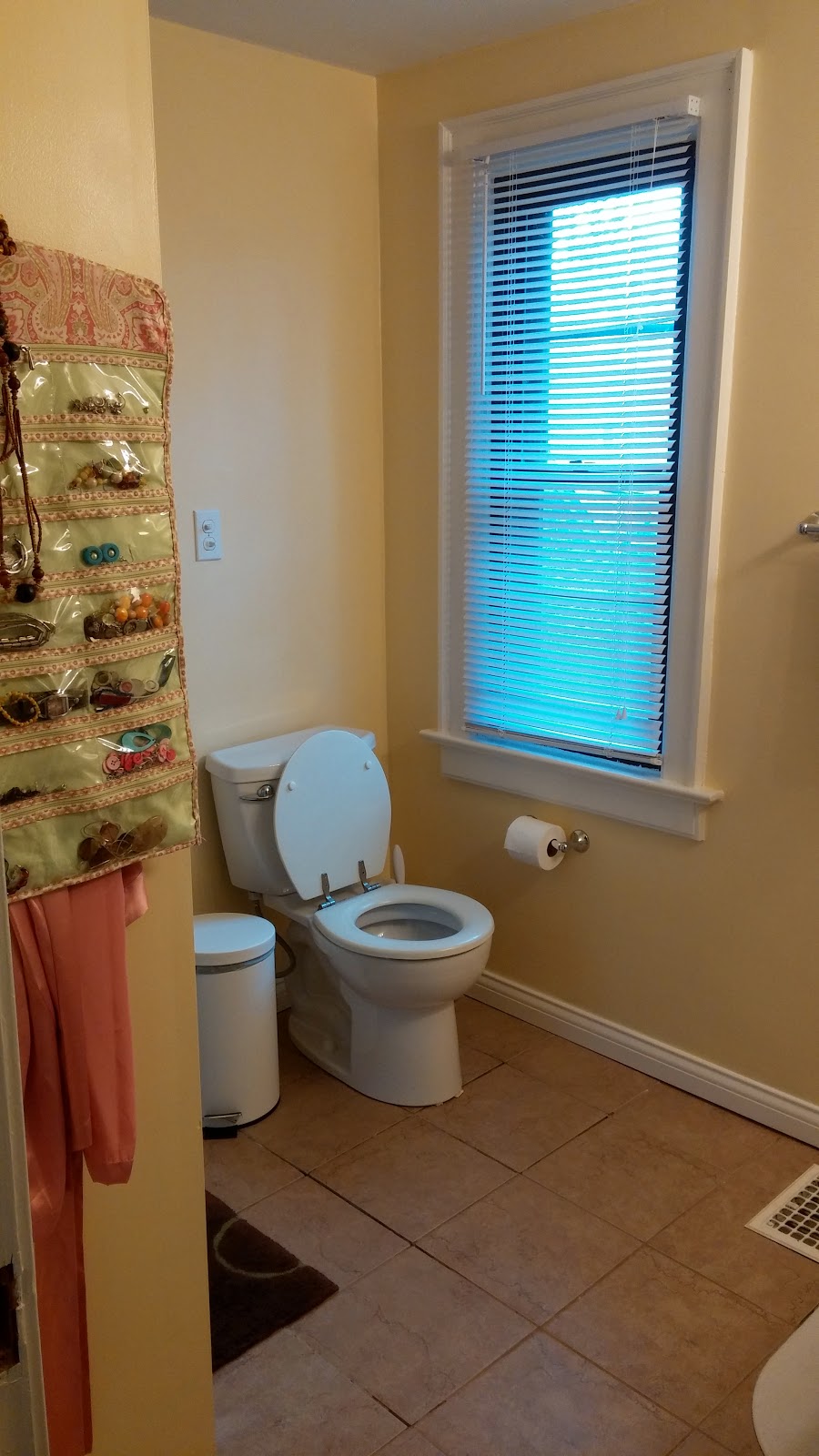 (The photos/lighting are deceiving.  The walls are a pale yellow color, not tan.) 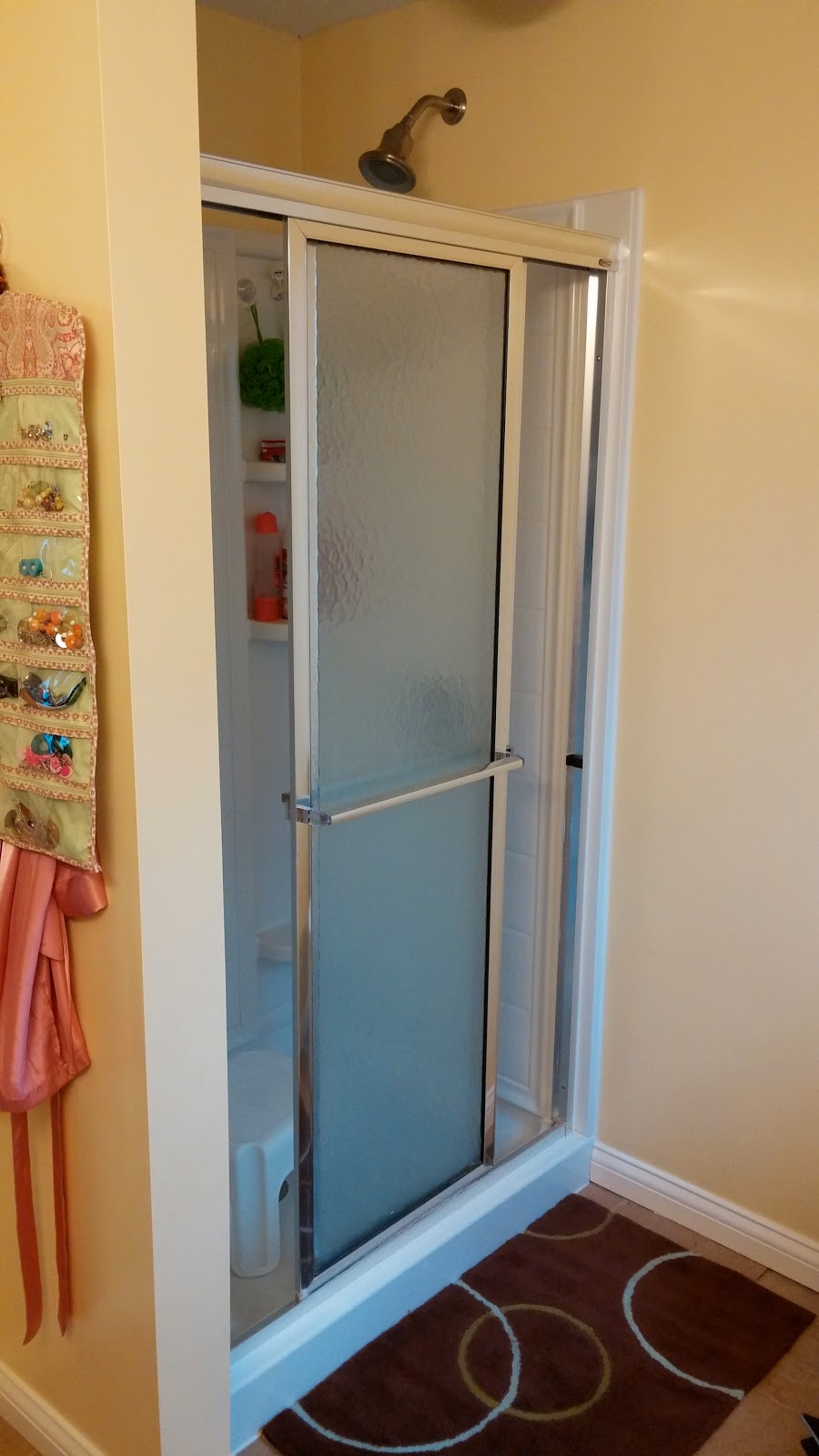 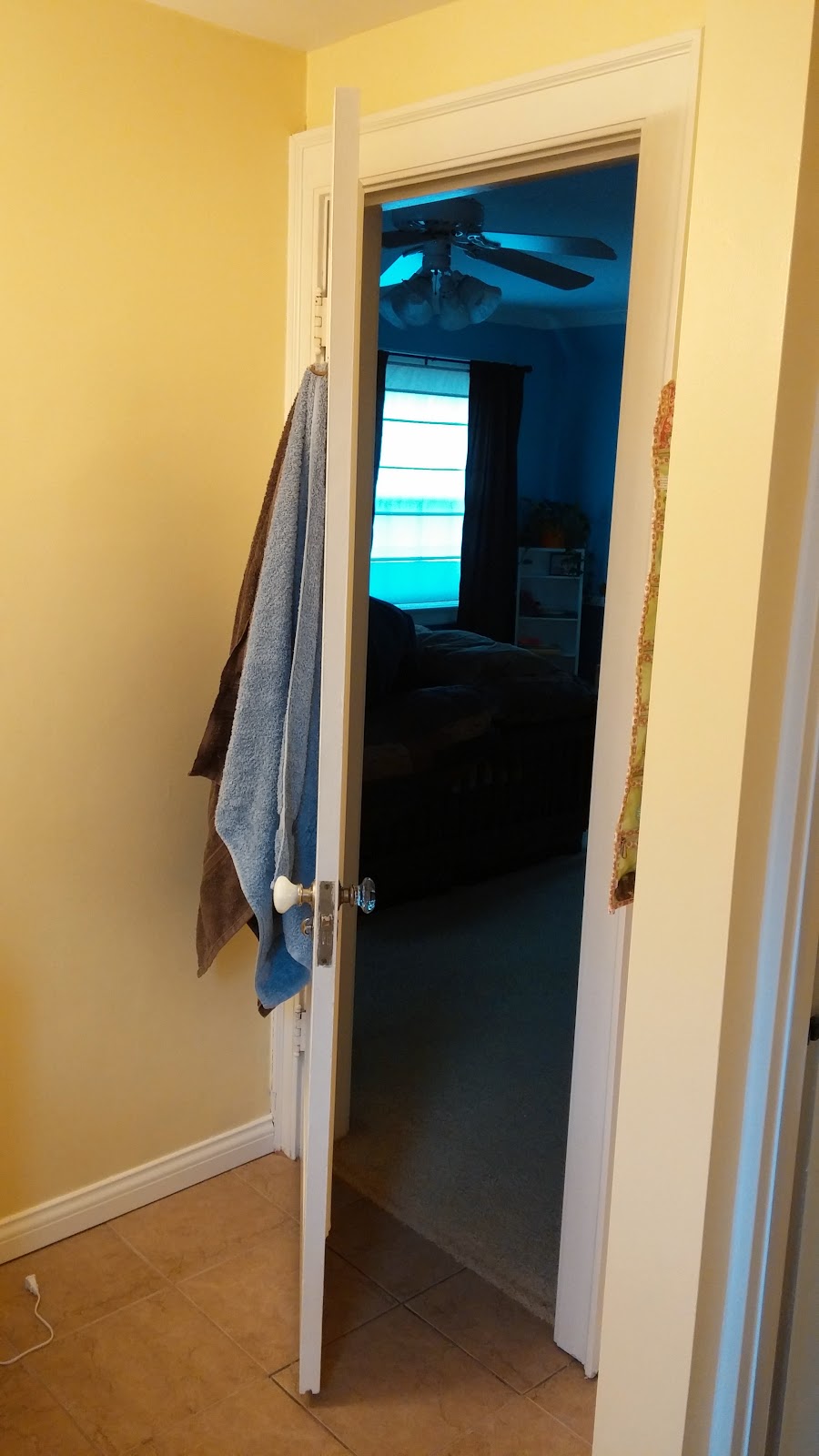 (View into the bedroom again. This is probably closest to what the real color looks like.) 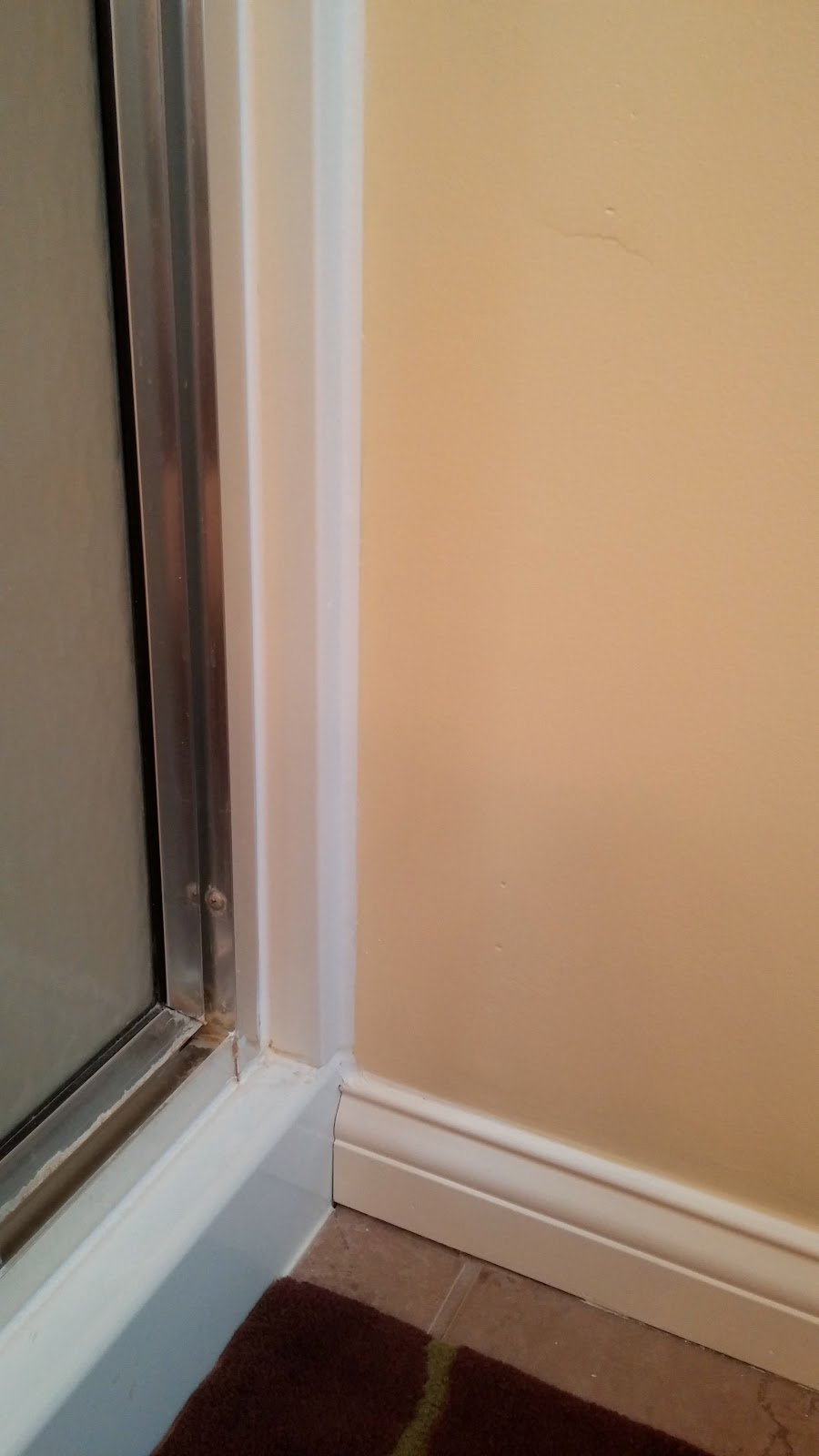 (Look at those clean lines!  This is where I re-caulked outside the shower - up the wall. I didn't take any photos of the caulking inside the shower.  You will have to take my word that it went from looking disgusting to brand new!) 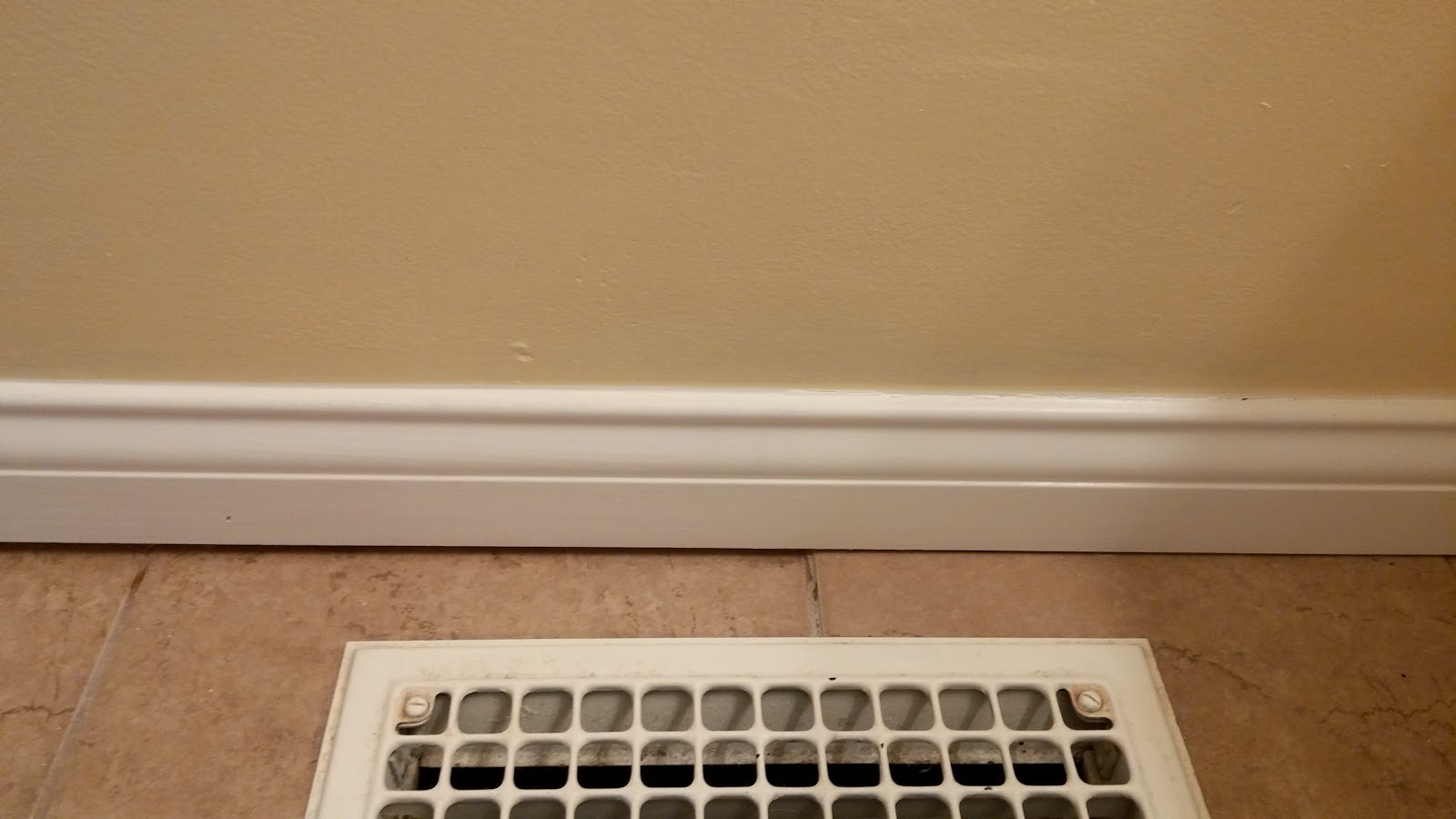 (No more paint running down onto the trim!) 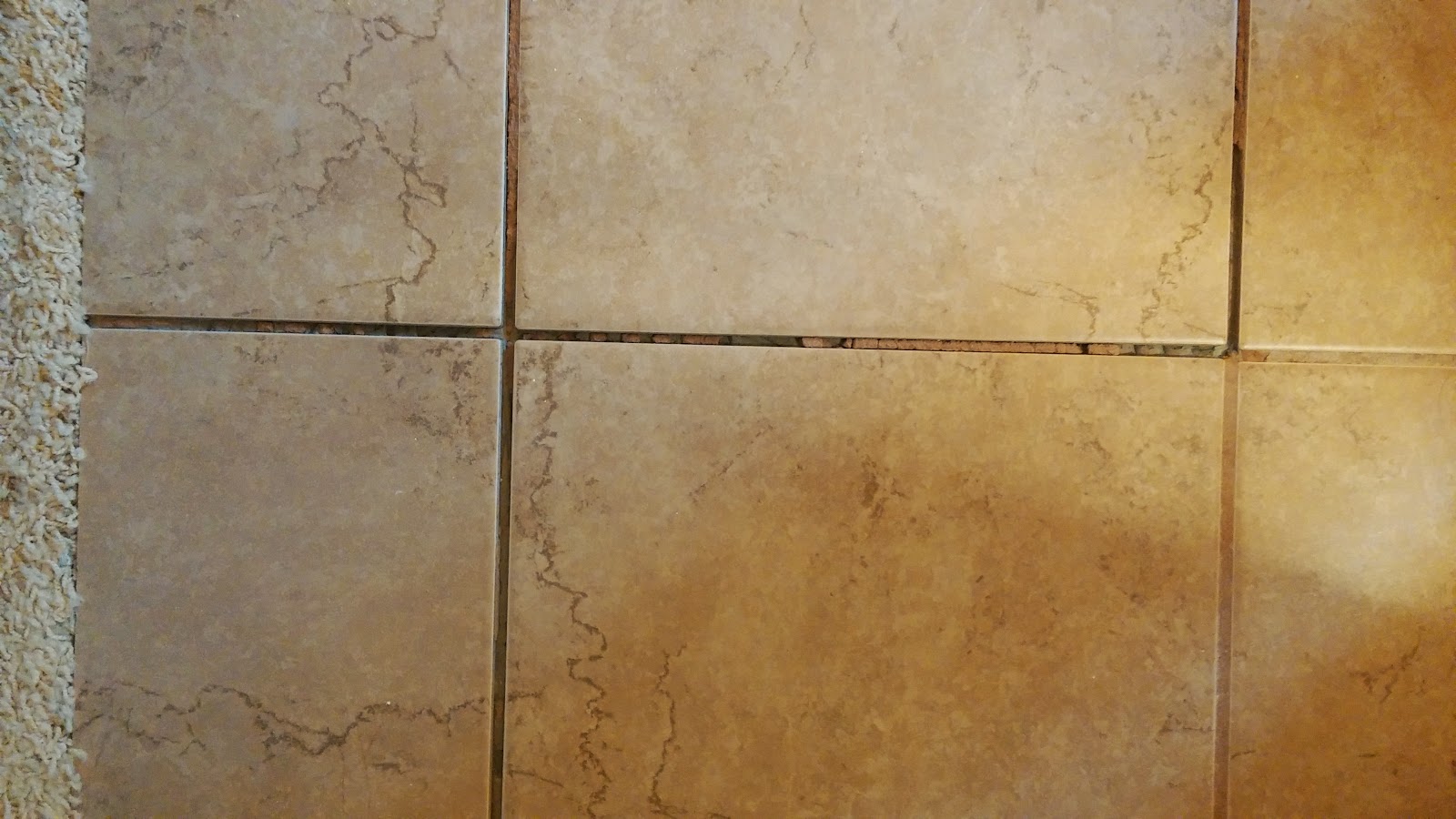 (Now if only I could convince husband that re-grouting the tile needs to be moved up on the priority list!)


There is a cabinet that we hope to hang up for extra storage, as well as a shelf.  Those fall under Steve's responsibility and they didn't get up in time for this post.  If and when they get hung up, I'll have to do an update post!
Posted by Unknown at 3:17 PM